Earlier, Duda and von der Leyen held face-to-face talks, during which they discussed further international aid for Ukraine in its defence against Russia.

The Warsaw conference was part of the European Commission's and Canadian government's 'Stand Up for Ukraine' campaign aimed to raise funding to support refugees fleeing Ukraine and internally displaced people in the country.

The European Commission said in an earlier press release that the 'Stand Up for Ukraine' event was held in the Polish capital "in recognition of Poland's essential role in supporting refugees fleeing the invasion of Ukraine."

At the Saturday conference, Duda said that not only was the West standing up in support for Ukraine, but also Ukraine was fighting in defence of Western values.

"Today we are rallying in defence of Ukraine, but at the same time Ukraine is standing up in our defence," Duda said.

Duda thanked von der Leyen for her Friday visit to Ukraine, calling it "a visible sign of EU presence in our neighbourhood," and said that it had also been "of great importance" to Poland. 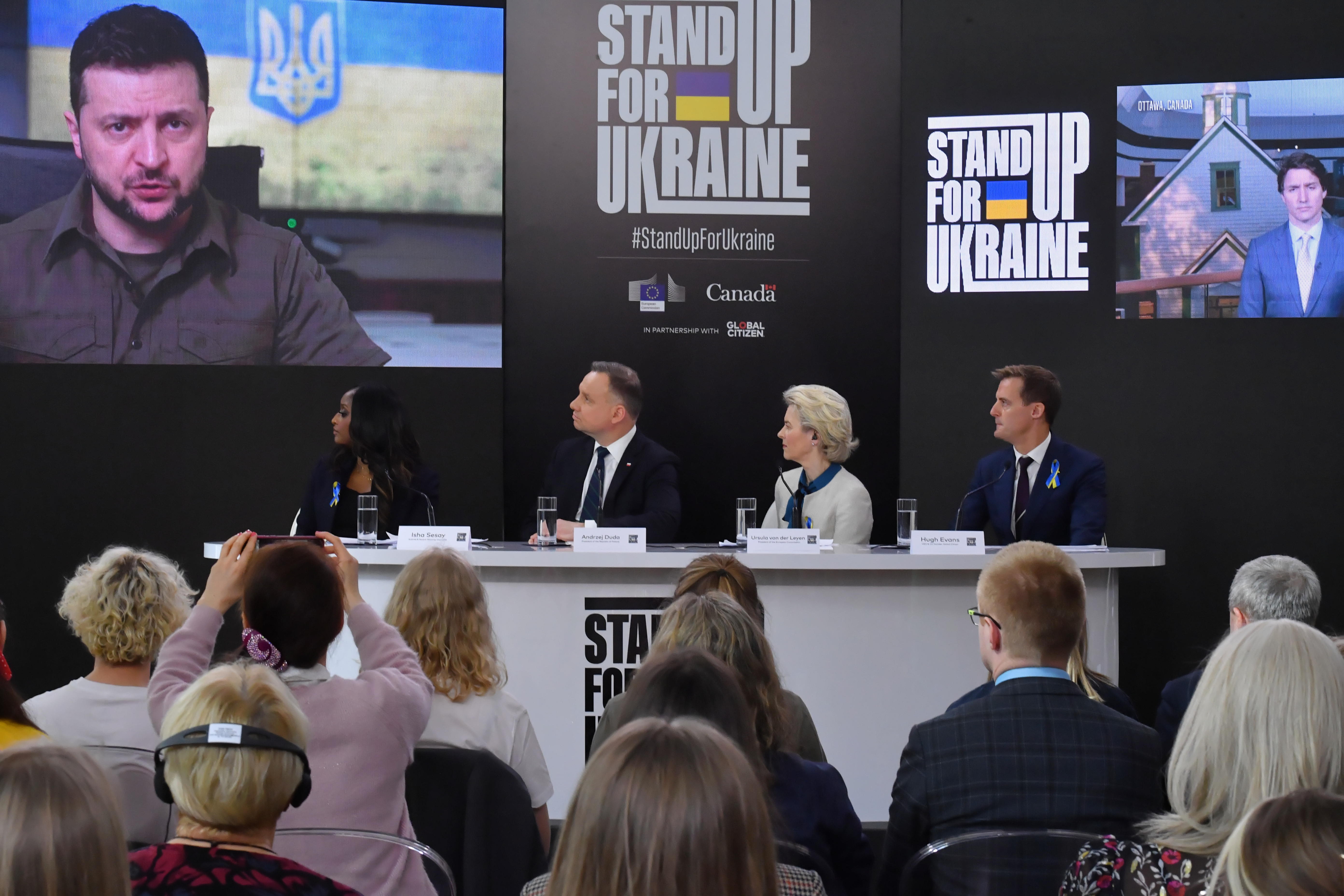 In his remote address to the conference, Zelensky said Russia's invasion of his country "proved to be an attack on the most courageous country in the world," going on to note that the Ukrainians' bravery had united the whole democratic world.Piotr Nowak/PAP

Duda said the conference's sitting in Warsaw had a symbolic meaning, as the war had made Poland a front-line state. He also called the meeting "another sign of international unity."

He went on to praise Ukrainian President Volodymyr Zelensky, whom he described as "a true leader and a hero of our times."

Duda also issued an appeal to Ukrainians, in which he assured them of international support for their struggle against Russia. "Dear brothers and sisters, you are not alone," Duda said.

He also underlined the urgency of aiding Ukraine's economy after the war and said the assistance should resemble the Marshall Plan for Western Europe after World War II.

The president announced Warsaw's plans to host an international conference of potential donors to Ukraine.

Von der Leyen said the conference's aim was to rally the international community around aid for war refugees from Ukraine.

She called the Ukrainians' defence of their country "heroic," and noted that they were not only fighting for their territorial independence, but also "for humanity as such to triumph."

In his remote address to the conference, Zelensky said Russia's invasion of his country "proved to be an attack on the most courageous country in the world," going on to note that the Ukrainians' bravery had united the whole democratic world.

Trudeau, also in a remote address, said the West's response to the conflict had to keep pace with the war's evolution, and appealed to the international community to continue its support of Ukraine and Ukrainian refugees.

TFN’s Stuart Dowell visits the myths and mysteries associated with the legendary luxury liner that was the MS Piłsudski.