Attempts by filmmakers to reveal the wartime truth about a forgotten corner of today’s Warsaw have uncovered shocking details about a hitherto unknown massacre of Jewish women and children and the mysterious German officer who was responsible.

Today, Białołęka is a busy, modern district in the north-east of Warsaw. During World War Two, though, it was a rural area outside of the city. The Germans bundled it into what they called Warschau-Land, which encompassed the Warsaw region’s outlying districts.

In the intervening 80 years, historians have taken a fine-tooth comb to events from that time in Warsaw, but little attention has been paid to the terrible crimes committed there.

Most of the pre-war inhabitants perished, fled or were deported. Several massacres of Poles and Jews were carried out by Germans; their bodies buried in mass graves. 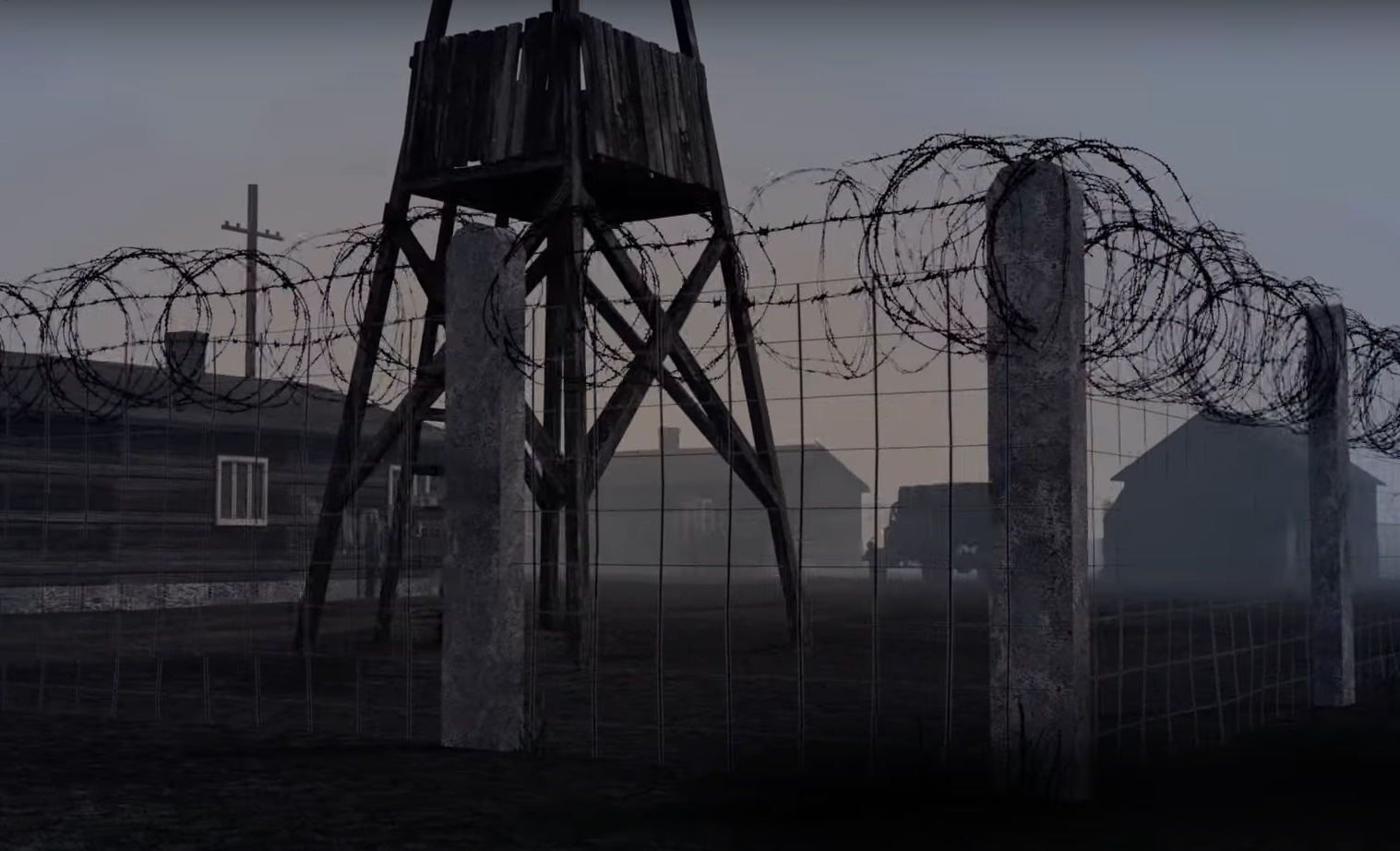 The largest execution took place in October 1942 when around Jewish 68 women and children were shot dead near the Piekiełko labour camp in Białołęka.Press materials

Many of the atrocities were carried out by a German field gendarmerie unit under the command of Karl Liebscher, a sadistic captain who was responsible for as many as several thousand murders of Poles and Jews in Białołęka.

However, basic personal details including his date and place of birth and the circumstances of his death remain shrouded in mystery.

His crimes and the memory of his victims would still be buried in the forgotten testimonies of witnesses if it had not been for filmmaker Maciej Janiszewski and local historian Andrzej Gutowski. 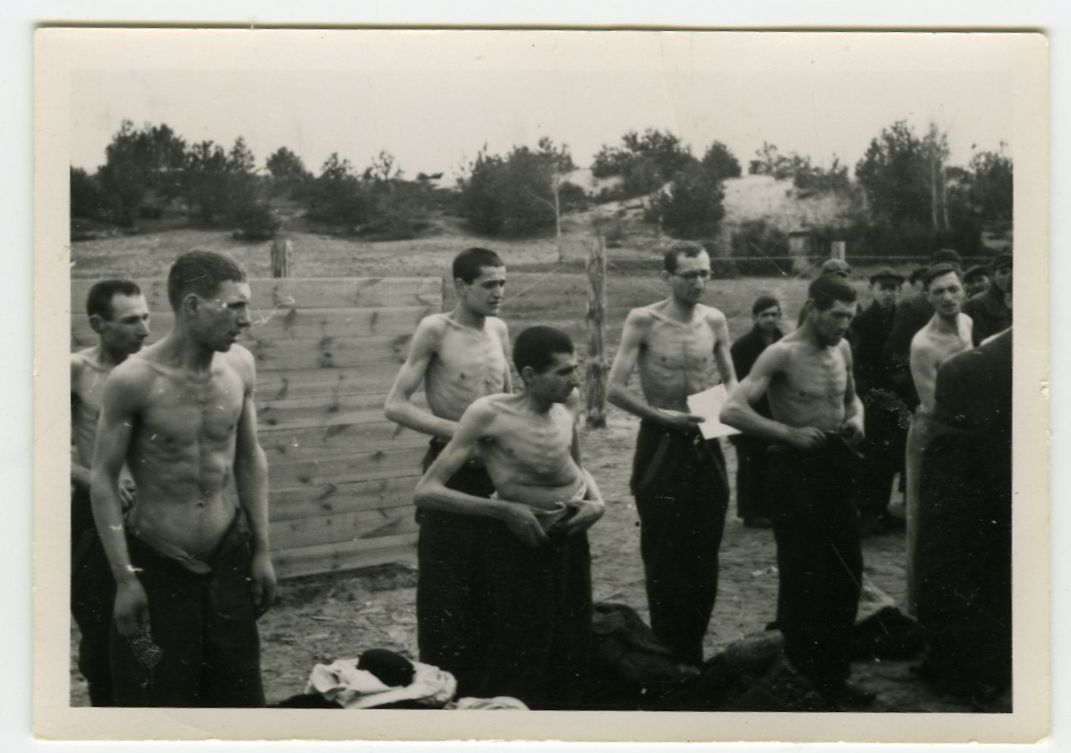 The Piekiełko labour camp was set up in 1940 in Białołęka because the Germans wanted to build a flood embankment to protect its economic interests in the area.Polish State Archive

“Białołęka is typical of many parts of Poland in that German wartime atrocities that took place there are largely unknown,” Janiszewski told TFN.

Liebscher’s largest execution took place in October 1942 when the unit he commanded shot around Jewish 68 women and children near the Piekiełko labour camp in Białołęka.

No records or photographs of this crime exist and the camp and the execution that took place there is not part of the Holocaust record.

But using buried testimony and reaching a new witness, the filmmakers managed to piece together what happened.

The Piekiełko labour camp was set up in 1940 in Białołęka because the Germans wanted to build a flood embankment to protect its economic interests in the area.

Initially, they used Jews from the Warsaw Ghetto, but the widespread disease and malnourishment there made them inadequate as labourers.

Many collapsed during the hard labour and would simply be killed by the capos on the spot and buried in the embankment they were building.

To speed up the work, the Germans decided to use 350 Jews from the nearby Jabłonna ghetto, which had recently been liquidated and their residents sent to Treblinka. According to the Germans, they were better fed and therefore would be better workers.

To maintain order, 38 Jews from the Otwock ghetto were drafted in as policemen. 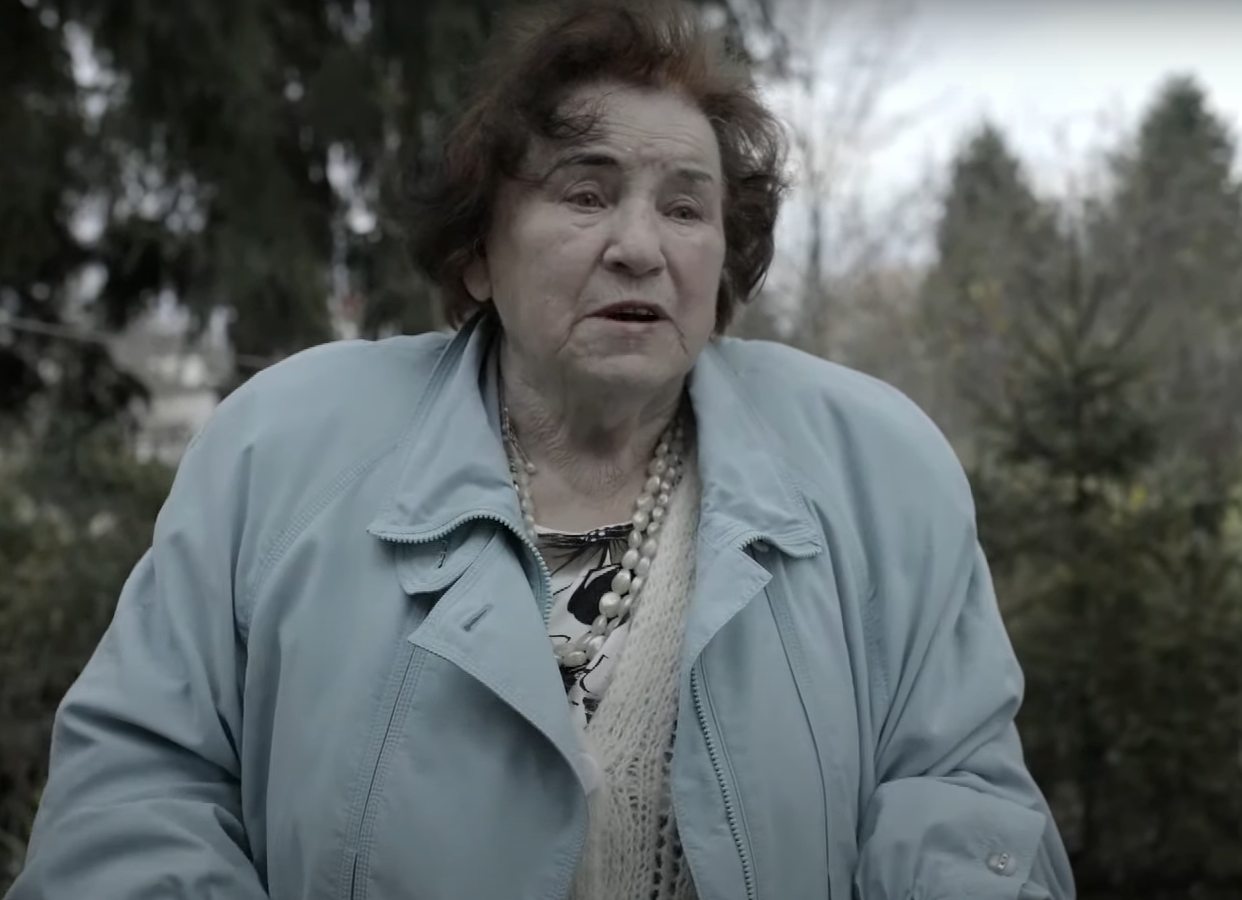 Krystyna Dyszkowska, a new witness the filmmakers managed to trace who still lives in Białołęka, observed the execution from an upper window in a neighbour’s house.Press materials

Some women and children, the families of the Piekiełko workers, had managed to escape the deportations. They gravitated towards the camp and hid nearby, knowing that their husbands, fathers and brothers were there.

Early in the morning sometime in October 1942, the Germans made a sweep of the area and captured several dozen of the hiding Jews. They placed them inside the camp barracks while the men went to work.

According to testimonies, the Germans departed the camp for the rest of the day and left the Jews under the guard of the Jewish policemen, who would answer with their lives if any of them escaped.

When Liebscher’s men returned in the evening they were extremely drunk. According to witness Calek Perechodnik, “they could hardly stand up.”

Some of the workers were ordered to dig a pit. When that was complete the Germans ordered the women and children to undress. 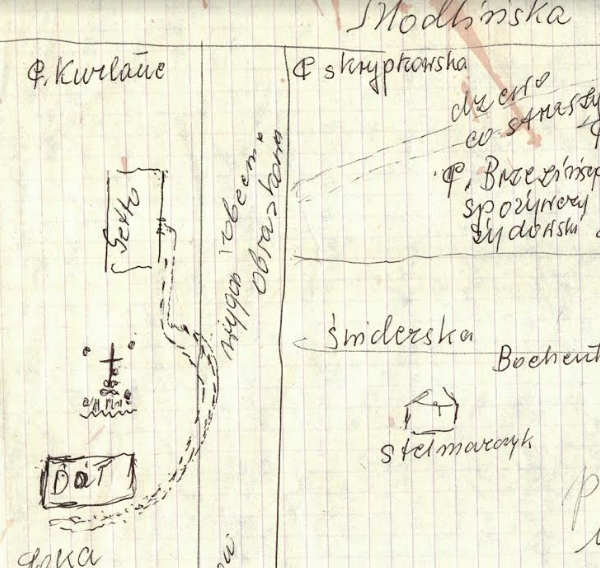 A plan of the site drawn by witness Krystyna Dyszkowska.Press materials

Krystyna Dyszkowska, a new witness the filmmakers managed to trace who still lives in Białołęka, observed the execution from an upper window in a neighbour’s house.

‘They started to come out of the barrack in pairs, like children going to school,” she said.

"When they had finished digging the pit, they were lined up over it, a few in a row, eight or more [...] There was a machine gun at the back from which the Germans fired bursts at the people, who then fell into the pit.

“Then the next group and the next. [...] When the machine gun fell silent, one or two Germans hovered around […] killing those who were still moving. The Germans also killed the Jews who had dug. They filled in the hole and drove back to the barrack". 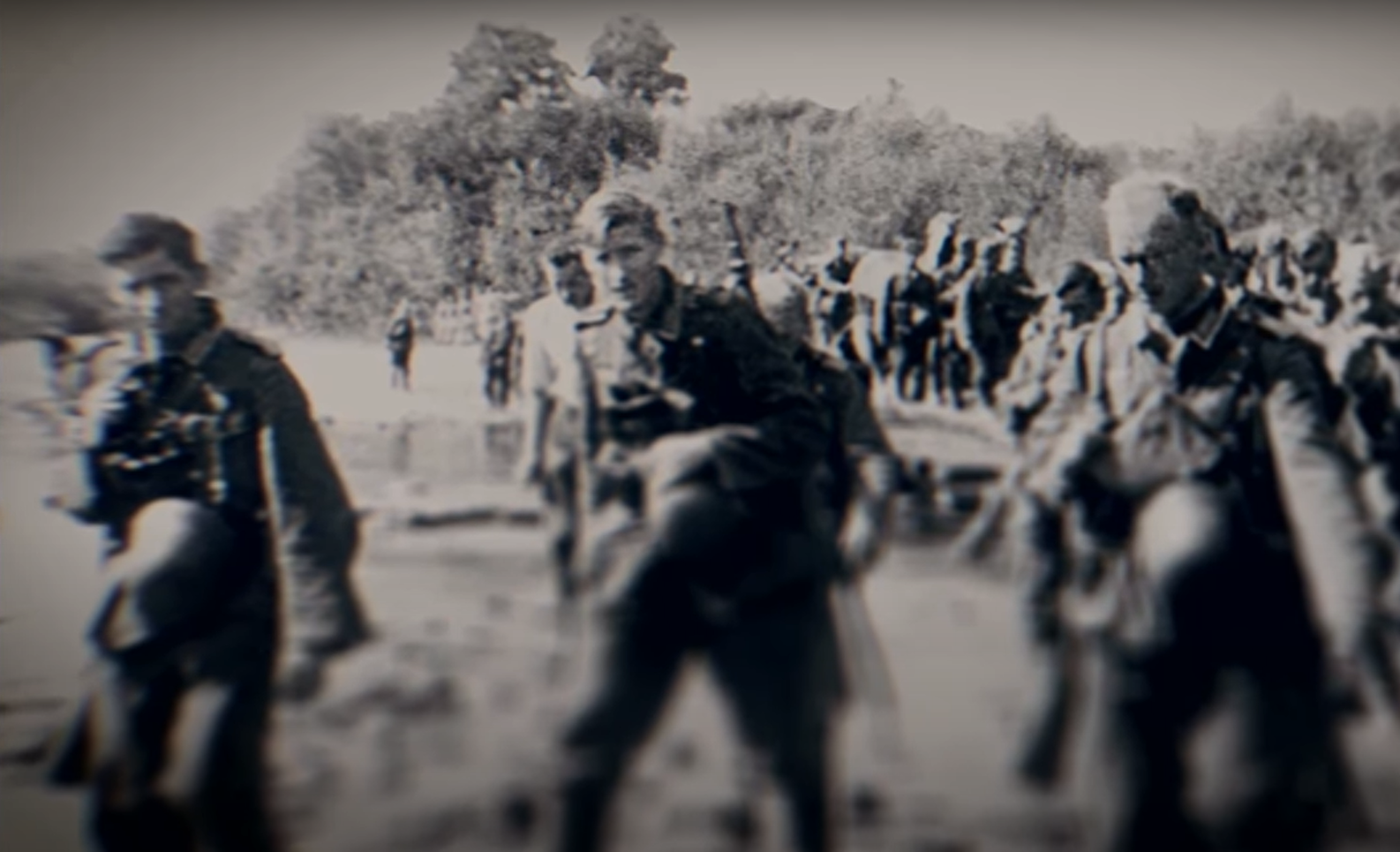 The German field gendarmerie unit was under the command of Karl Liebscher, a sadistic captain.Press materials

Testimony from the time points the finger of responsibility at Karl Liebscher’s unit of field gendarmes.

The film’s director Maciej Janiszewski and scriptwriter Andrzej Gutowski investigated Liebscher but the results threw up more questions than it answered.

“The only thing that is clear when it comes to Karel Liebscher is that nothing is clear,” he told TFN.

They received some information about him from a Polish investigation into the liquidation of the Otwock ghetto. The documents state that he was born in 1890 in Zettel in the Sudeten mountains, now part of the Czech Republic.

They knew that the Bundesarchiv in Berlin had more files about him, but many attempts to obtain them were ignored. It was only after the German embassy in Warsaw intervened that they received papers.

The film’s director Maciej Janiszewski and scriptwriter Andrzej Gutowski investigated Liebscher but the results threw up more questions than it answered.Film materials

What they discovered though made little sense. The documents stated that Karl Liebscher was born in 1900 and that he joined the Wehrmacht at the age of just ten.

They also described his death in 1944 as being the result of an accident while demonstrating how to use a Panzerfaust anti-tank rocket.

Many of the pages from the files were missing, and most disappointing was that the photograph of Liebscher was also not in the file.

“The information from the German archive is not credible,” Gutowski said.

Janiszewski’s theory for the inconsistencies in the files is that Liebscher may not have died at the end of the war but instead may have been employed by post-war German intelligence services. 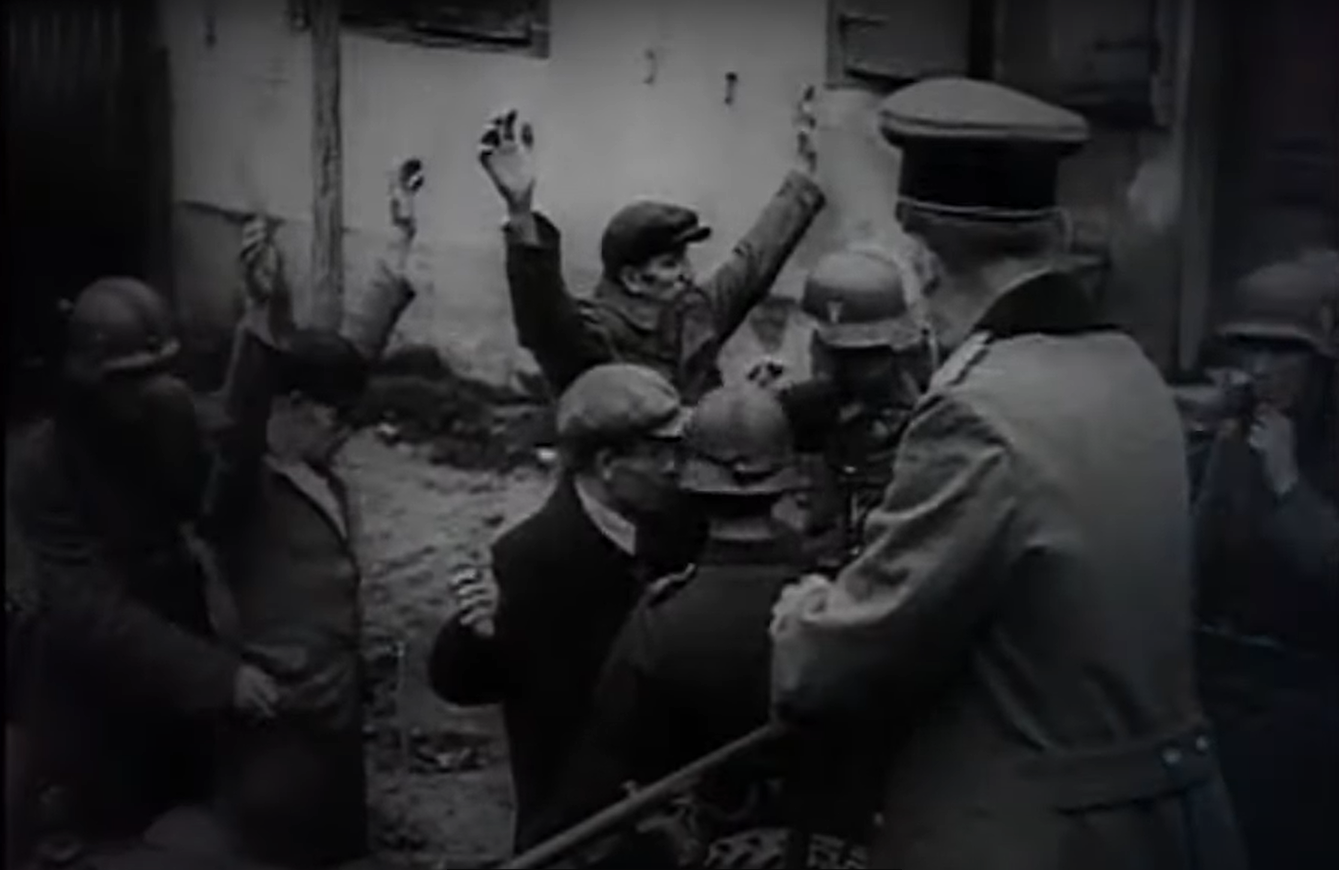 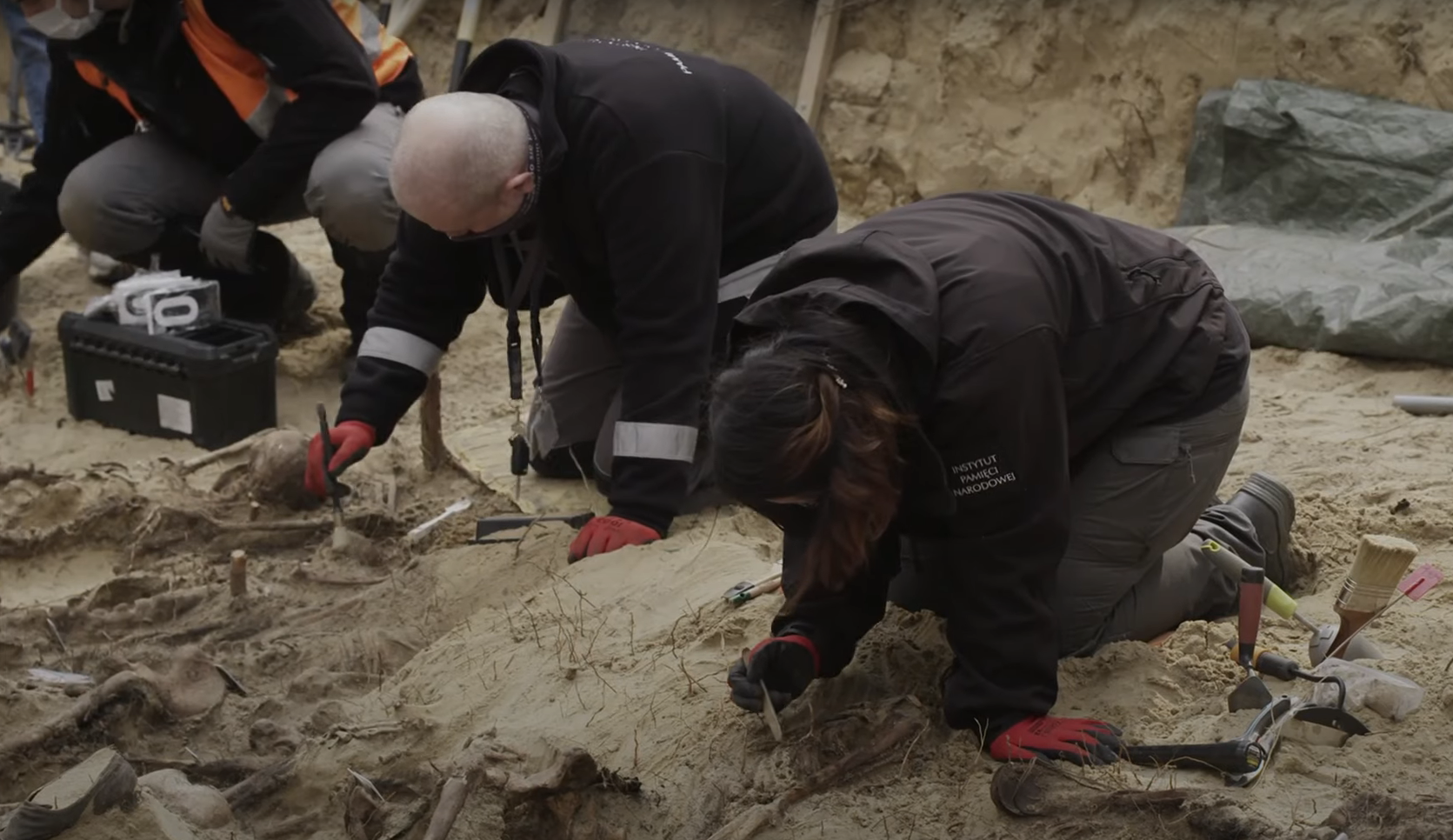 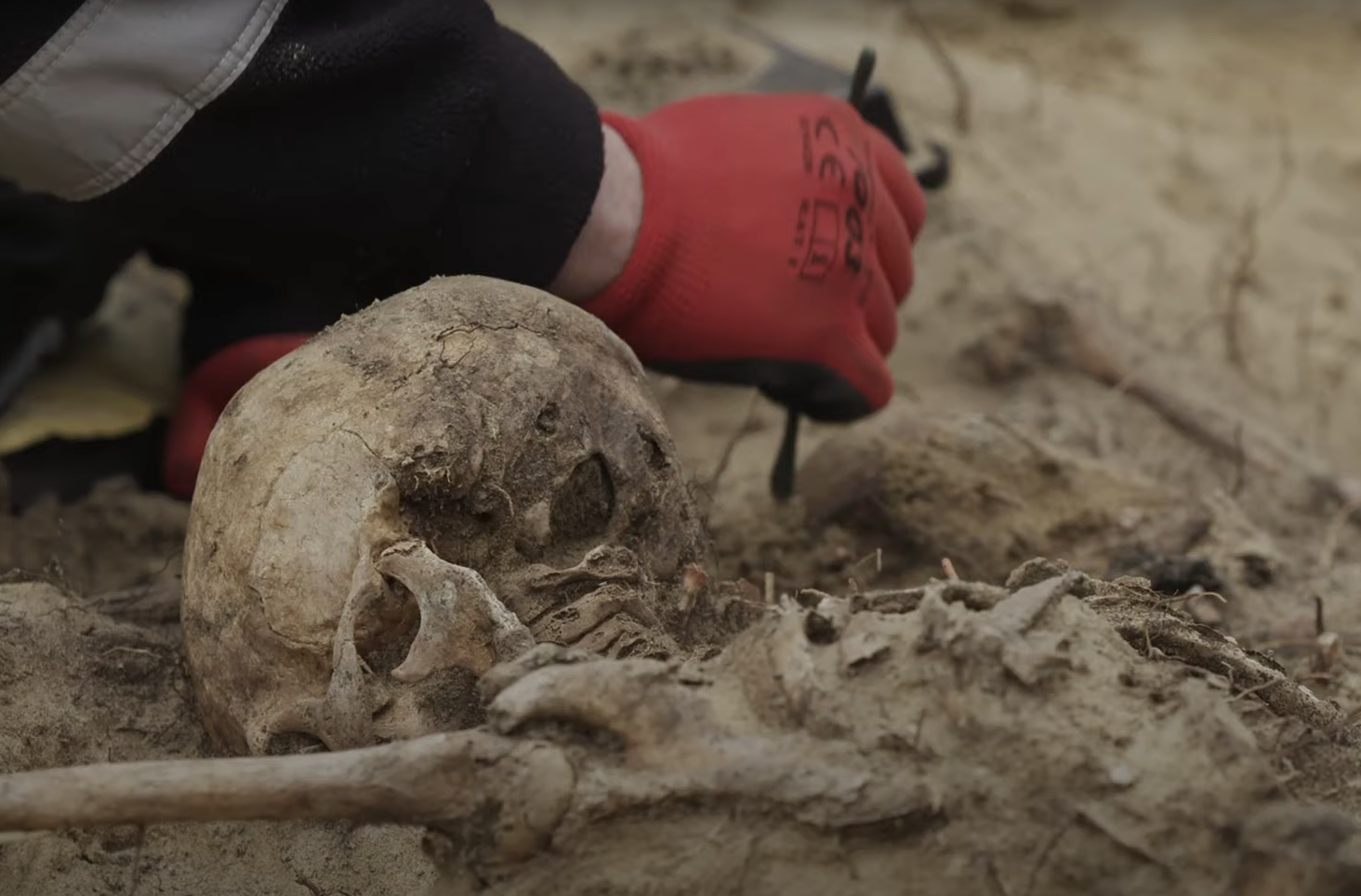 At the end of the film, one of Janiszewski’s witnesses tells the story of the execution of around a dozen Polish men in the district at the beginning of the war. The filmmakers persuaded the Institute of National Remembrance to search the site. When they exhumed the site, they found many more victims including women and children.Film materials

“Many former Nazis, often war criminals, were recruited by intelligence agencies after the war, so what we see in the records is consistent with this,” he said.

North of Hell provides details of other German wartime atrocities in Białołęka, some also carried out by Liebscher and his men.

At the end of the film, one of Janiszewski’s witnesses tells the story of the execution of around a dozen Polish men in the district at the beginning of the war. The filmmakers persuaded the Institute of National Remembrance to search the site.

When they exhumed the site, they found many more victims including women and children.

“That is a mystery for another film,” Janiszewski said.