Capt. Biliński hopes the message about the deeds of the Righteous Among the Nations will be carried between people and vessels he meets along the way.

A Polish lawyer has set sail on a solo voyage across the Atlantic to commemorate Poles who saved Jews during WWII.

In his 6.5-metre yacht, with thousands of names inscribed across it, Captain Bartosz Biliński left New York and is now headed for Plymouth in the UK where he plans to spread awareness of the courage and sacrifice of the Polish Righteous Among the Nations.

The names on his ship are only a fraction of the 6,706 Poles who saved Jews from extermination by the Germans during the Second World War.

The inscriptions were made by 200 children and some adults of Polish-American descent from New York. Among them were even the families of the heroes they sought to honour.

Biliński hopes that the message about their deeds will be carried between people and vessels he meets along the way, reaching further than his small yacht will. The ship itself is named ‘Witold’ in memory of two WWII heroes: Witold Pilecki and Jan Karski, whose code name was also Witold. 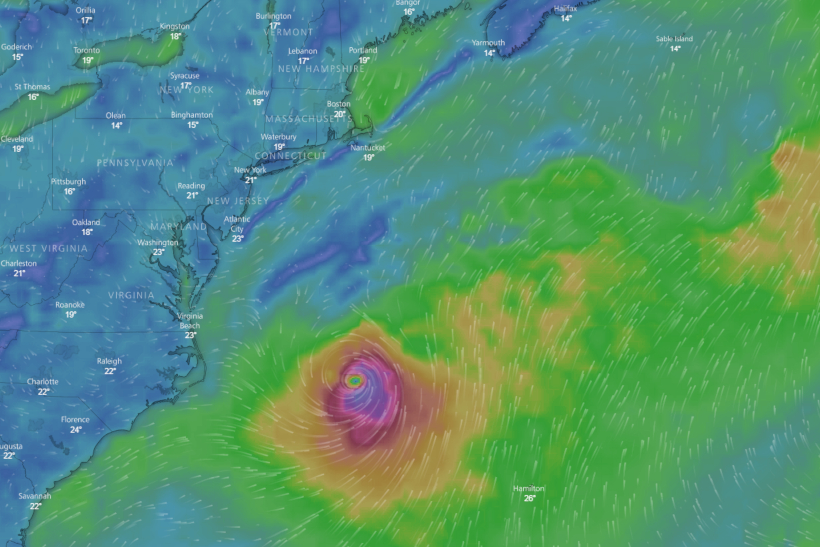 Deadly storm on the Witold yacht’s path. Shortly after leaving from New York Capt. Biliński was forced to seek shelter in Halifax.
(windy.com)

The symbolic trip had a stormy start, as Capt. Biliński informed on his Facebook on July 11th: “Checking into Halifax. Everything good. Will write more tomorrow. Good decision. I'd be right on the hole, violet hole” - the violet hole being the centre of an enormous storm raging off the US eastern coast, with wind speed even up to 200 km/h.

Yet equipped with a white and red flag gifted by the Polish president Andrzej Duda and the strength of his convictions, Capt. Biliński is ready to face any challenge. In the official description of the Righteous Across project he wrote: “This year 2018 Poland celebrates 100th anniversary of regaining Independence. I thought that commemorating some of Poland's heroes would be the right thing to do.

“Also, because I am deeply concerned about people and organizations misrepresenting history of Poland and Poles, some even accusing Poland as a state and Polish people of complicity in German-Nazi crimes and genocide of World War two.”

Bartosz Biliński, who came up with the project, self-funded it and now sails ‘Witold’ yacht is a New Yorker, a lawyer and a history enthusiast. 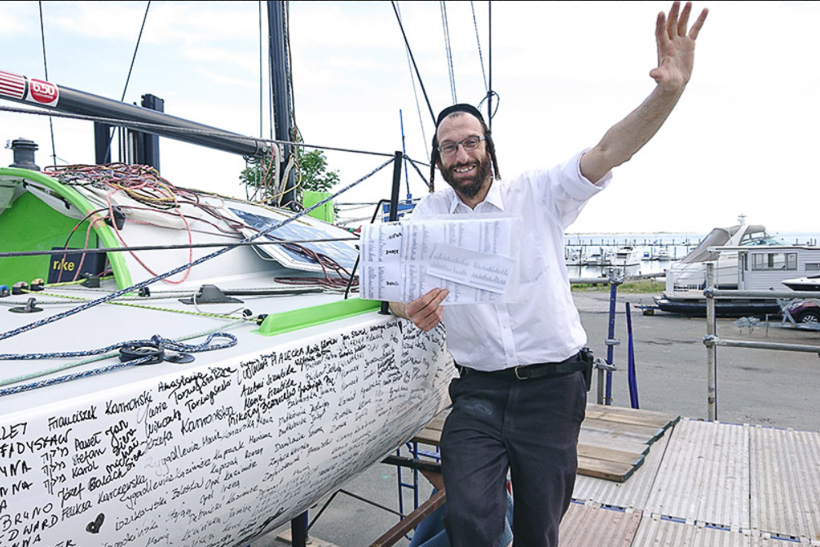 A list of Polish Righteous Among the Nations, to be inscribed on the yacht’s side. How to fit 6,706 names on a 6,5 meters ship?
(Righteous Across)

He was born in Cracow, graduated from law at the Jagiellonian Univeristy and then at the Yeshiva University in New York. As a member of the Yacht Club Poland, he combined his passion and a deeper calling.

“We have to guard the historical memory. It’s important, because sometimes in our hearts and minds we are oblivious or unwilling to remember, even purposefully forget or pass on the history without a trace of those, who sacrificed so much under the occupation to safe their fellow citizens,” he shared.

“My grandma told me, that during the war she hid a little child  when the Germans came to this small village near Łowicz, where she lived. I always recalled this story and when I heard Bartek wants to commemorate such people, I was very glad. It’s a beautiful gesture,” said Marlena Beata Lindner, who knows Biliński from the Yacht Club of Poland New York .

On the yacht’s bow she drew a heart and three dots which symbolized all the unknown heroes, who saved Jews and we know nothing about them. 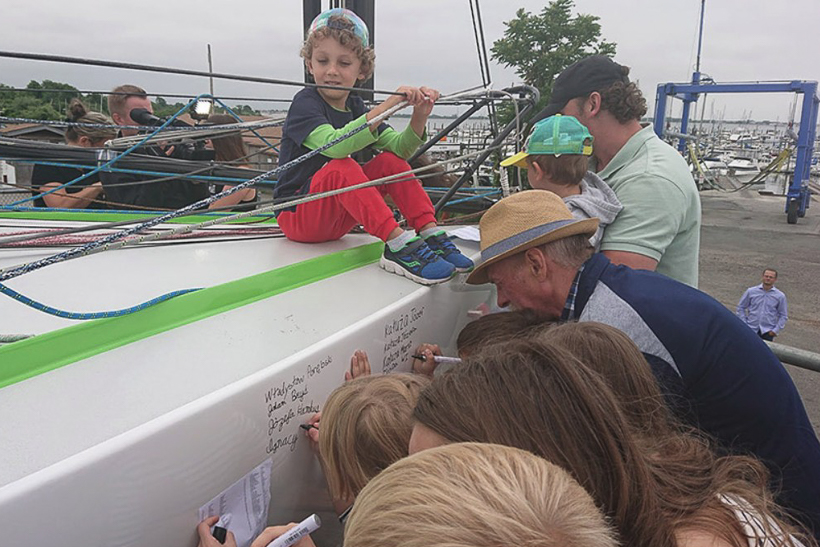 The Righteous names written down by New Yorkers before Bartosz Biliński’s departure.
(Righteous Across)

There is no doubt, that the Righteous Among the Nations (non-Jews who risked their lives to save Jews from the Holocaust during the Second World War) deserve to have their memory preserved, no matter the political situation.

Heroes, such as the UIma family, who were executed for hiding two Jewish families or Antonina and Jan Żabiński, who saved hundreds of Jews from the Warsaw Ghetto by sheltering them in the city’s ZOO are the topics of books, movies and have museums dedicated to them.

Biliński wants to go even further. There are thousands of people, about whose small sacrifices and acts of kindness we may never learn.

These unknown Righteous are symbolized on his ship by the generic Polish name: Jan Kowalski, Maria Kowalska, Jan Nowak, Maria Nowak. What’s more, on the project’s website he encourages people who know of such acts, to register them for further inquiries.

More information about the project can be found HERE.