Poland's Constitution: the who, what, why, where and when of Europe's oldest constitution

Poland took time to celebrate the signing of the first modern constitution in Europe (and second only to the United States in the world) on May 3.

The constitution was well ahead of its time coming out at a time when most of Europe was still dominated by autocratic monarchies that viewed the progressive principles laid out in the document as dangerous heresy and a threat to the established order.

But the creators of the May 3, 1791 Constitution were, in fact, hardly sticklers for procedural niceties, secretly moving the parliamentary vote two days forward in a bid to pass the constitution before its opponents could return from Easter holidays. Even then the proceedings had more than a whiff of a coup d'état with the royal guard surrounding the debating chamber.

Despite its questionable legality, the gambit worked – for a while at least. For in hindsight the May 3 Constitution proved, in the words of one of its creators, “the last, brilliant gasp of a state in its death throes.”

The union of Poland and Lithuania, known as the Commonwealth of Both Nations, was in the late 18th century a European backwater with an archaic economic system based on extreme exploitation of the peasantry by the nobility that made up perhaps 10 percent of the society and enjoyed political privileges unparalleled elsewhere at the time. Nobles elected the king for life and chose deputies to the lower chamber of parliament, known as the Sejm, with strict instructions on how to vote.

Their jealously guarded “Golden Freedom”, which included the right to veto all the laws passed during a parliamentary session with just a single vote, paralysed the state and rendered it easy prey for neighbouring powers – Austria, Prussia and most of all, Russia: two decades before the constitution, in 1772, the powers had forced Poland to cede over a quarter of its territory and a third of the population.

The constitution aimed to address these ills through centralisation and consolidation of power in the newly instituted hereditary monarchy. It abolished the Polish-Lithuanian union in favour of a unitary state and reformed political institutions, streamlining decision-making processes; instituted permanent taxation and expanded the army. All this was to prove too little too late. 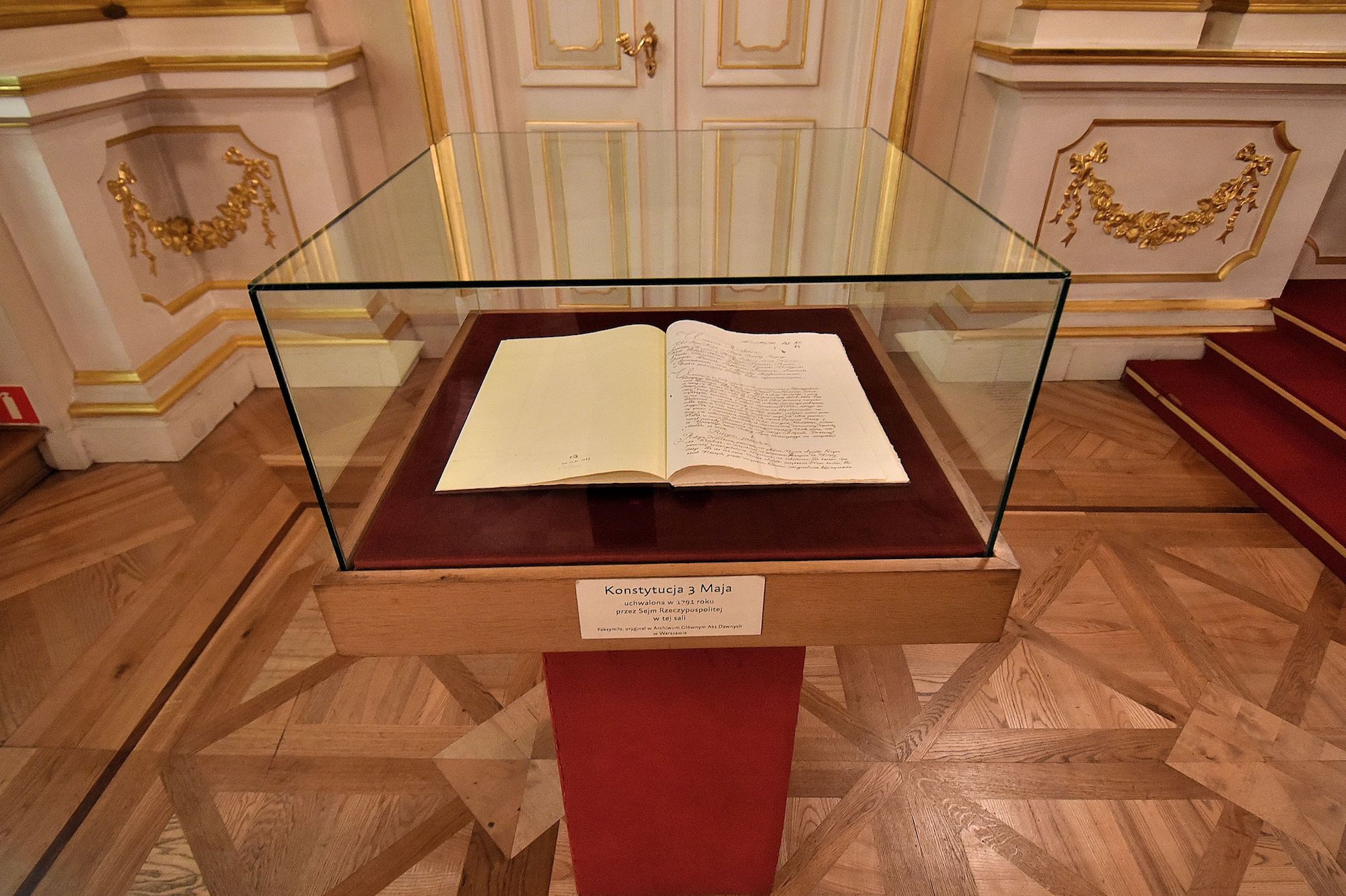 A copy of the Constitution on May 3, exhibited in the Senator's Room in Warsaw.Adrian Grycuk

The constitution’s critics rightly painted it as an assault on the uniquely Polish political traditions of “Golden Freedom” and “noble democracy” (all nobles were theoretically equal). Infused with the ideas of the Enlightenment, its framers sought to imitate the progressive institutions of the revolutionary United States and France, importing modish political philosophies from western Europe and the east coast of America.

The response of the conservatives, proud defenders of Polish exceptionalism was swift and effective, as Empress Catherine the Great of Russia proved only too glad to accept their invitation to intervene in defence of Poland’s ancient institutions. Barely a year after the constitution was passed, it was abandoned with the Russian army marching on Warsaw.

The radical attempt at modernisation of the Polish state and bringing it into the western European mainstream resulted in a rebellion by the traditionalists and a resounding defeat at the hands of Russia. On the heels of military catastrophe followed the second partition of Poland, which under the rule of Russia and Prussia destined it to disappear off the map of the world a mere four years after the intoxicating triumph of May 3, 1791.

Later historians were to speculate that without acts of defiance of Russian domination, such as the constitution, the Polish state might have perhaps staggered on until the Napoleonic wars would offer a more opportune time for state renewal.

Whatever such counterfactuals are worth, May 3rd remains Poland’s most important state holiday and Targowica, a town formally in Poland and now in the Ukraine, which was the ostensible headquarters of the opposition to the constitution, still functions in Polish as shorthand for treason.

The constitution of 1791, preserving as it did serfdom of the peasants and criminalising the rejection of Christianity from the Roman Catholic Church, offers few direct lessons for today.