A new navigation channel that allows ships to pass easily from the Gulf of Gdańsk to the Vistula Lagoon is to be officially opened at the weekend.

The opening of the Vistula Spit Crossing on Saturday 17 September means that for the first time in Poland's post-war history, it will be possible for vessels to enter the Vistula Lagoon bypassing the Russian exclave of Kaliningrad.

The Vistula Spit is a sandy embankment on the southeastern shore of the Gulf of Gdańsk, stretching from Gdańsk in the west to Kaliningrad in the northeast.

It separates the Vistula Lagoon from the open waters of the Gulf of Gdańsk. Until now, shipping wanting to enter the lagoon had to enter through a crossing in the Russian-controlled city of Baltiysk. 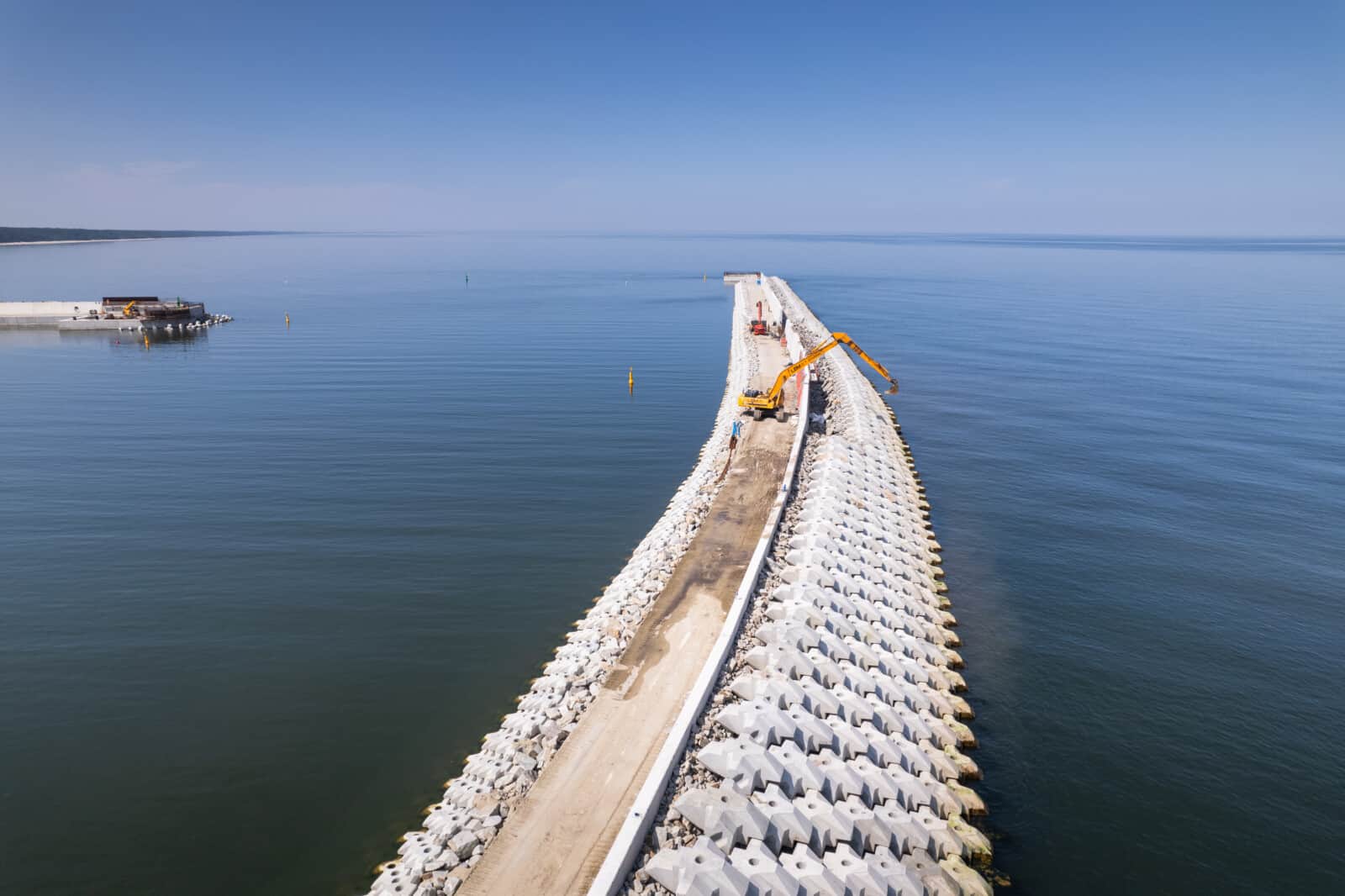 A unique technology, prefabricated 'x-block plus' blocks, has been used for the breakwaters.NDI 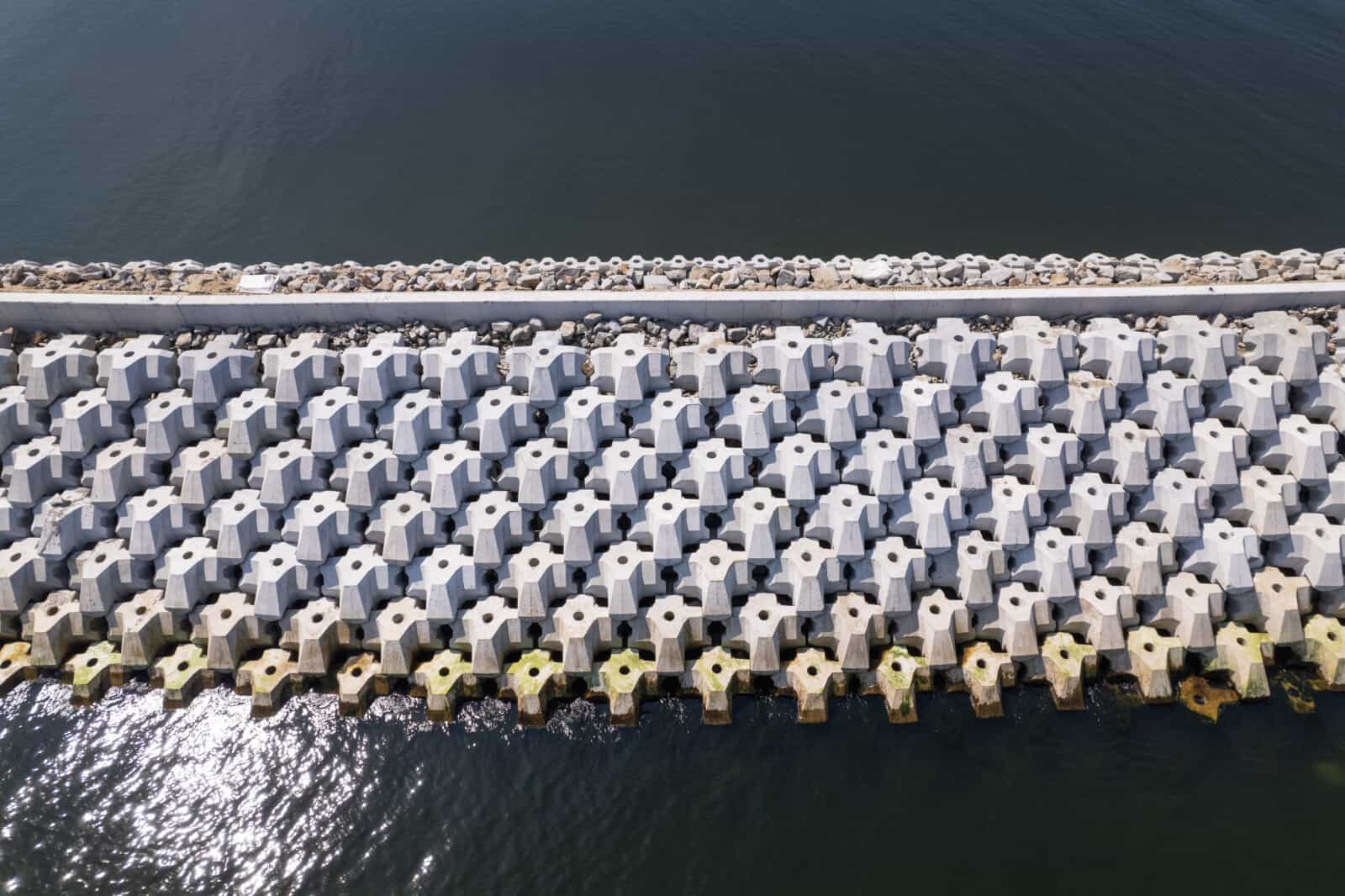 Each block has its own number and coordinates. According to the engineers, placing them in the right place is like building with Lego bricks.NDI

To pass through the Strait of Baltiysk, Polish vessels had to obtain permission from Russia each time.

The new crossing in Poland removes this need and also shortens the journey for shipping by over 100 km.

Though last-minute jobs and staff training are still underway, Wiesław Piotrzkowski, director of the Maritime Office in Gdynia said: “We are in the final stage, the contractor is about to hand over the whole investment. The execution of this rather complicated hydrotechnical structure is being carried out according to schedule.”

The huge hydrotechnical project has been carried out by the Polish Maritime Office and is much more than simply cutting a path for ships through the sandy embankment. 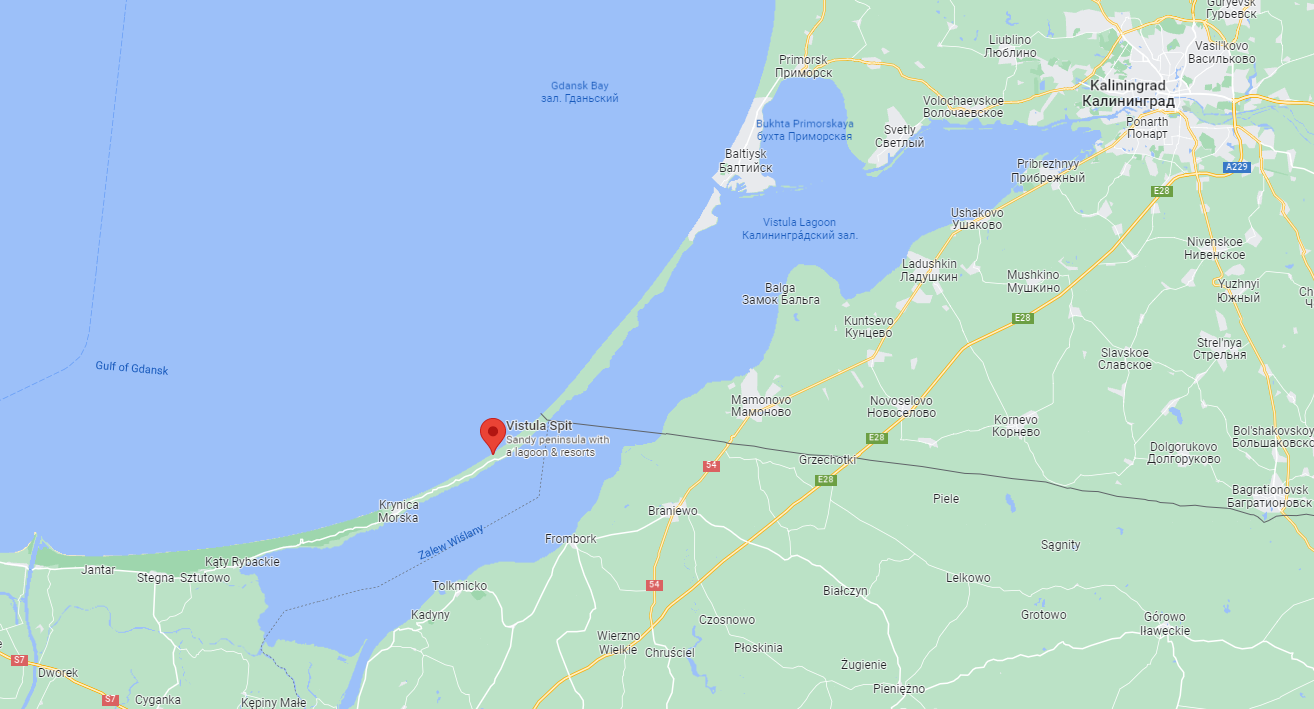 The Vistula Spit is a sandy embankment on the southeastern shore of the Gulf of Gdańsk, stretching from Gdańsk in the west to Kaliningrad in the northeast.Google maps

It also included a new road system with movable steel bridges, as well as the construction of an artificial island on the Vistula Lagoon.

The sheltering harbour on the Gulf of Gdańsk side is protected by two breakwaters. The main breakwater, or east breakwater, is more than a kilometre long, while the smaller west breakwater is about 540 metres long.

The east breakwater has an erratic structure so that waves entering the harbour will be dampened and broken up so that no dangerous ripples are created in the shipping channel. 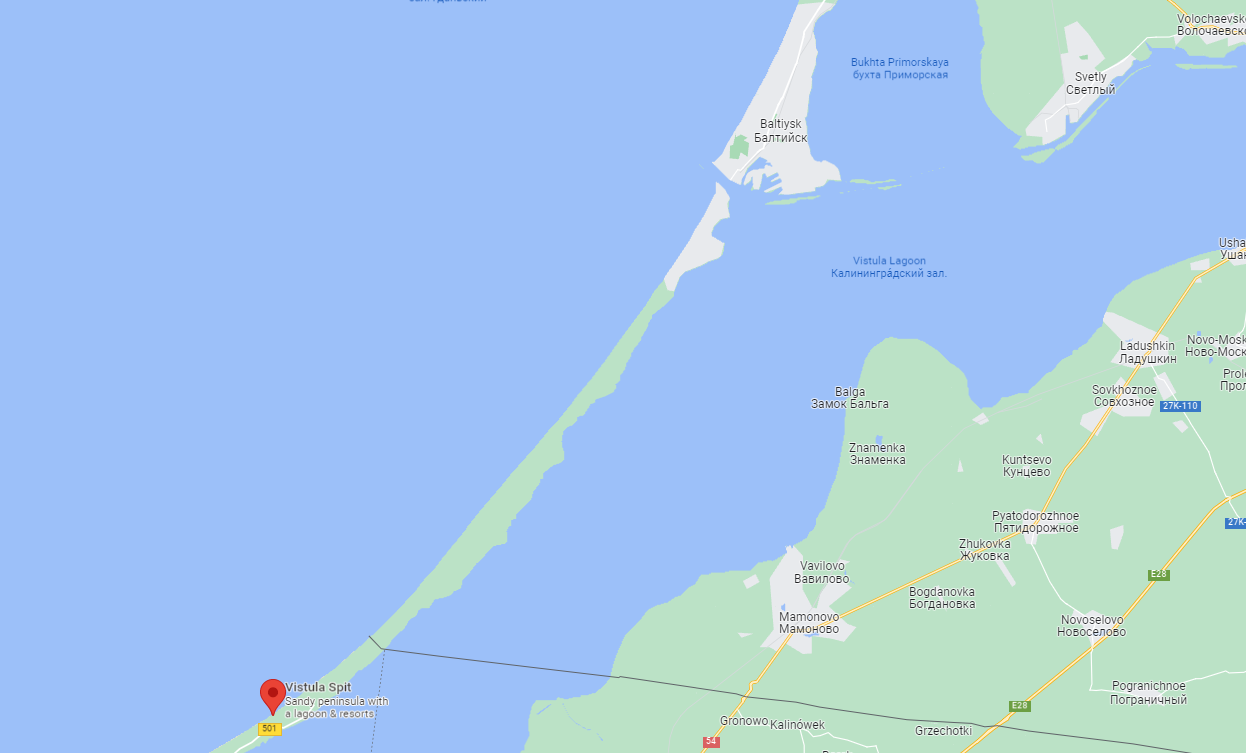 Until now, shipping wanting to enter the Vistula lagoon had to pass through the Russian-controlled Strait of Baltiysk and obtain permission from Russia each time.Google maps

“All the main works, both in the sheltering harbour and in the shipping channel, are now so far advanced that the shipping may be introduced,” said Bartosz Zabłocki, hydro-engineering works manager from the general contractor the NDI/Besix consortium.

A unique technology, prefabricated 'x-block plus' blocks, was used for the breakwaters. These have previously only been used on the Afsluitdijk Dam in the Netherlands.

Each block has its own number and coordinates. According to the engineers, placing them in the right place is like building with Lego bricks.

Work has also finished on Poland’s newest island, which is on the lagoon side. It has unofficially been given the name Esty Island. 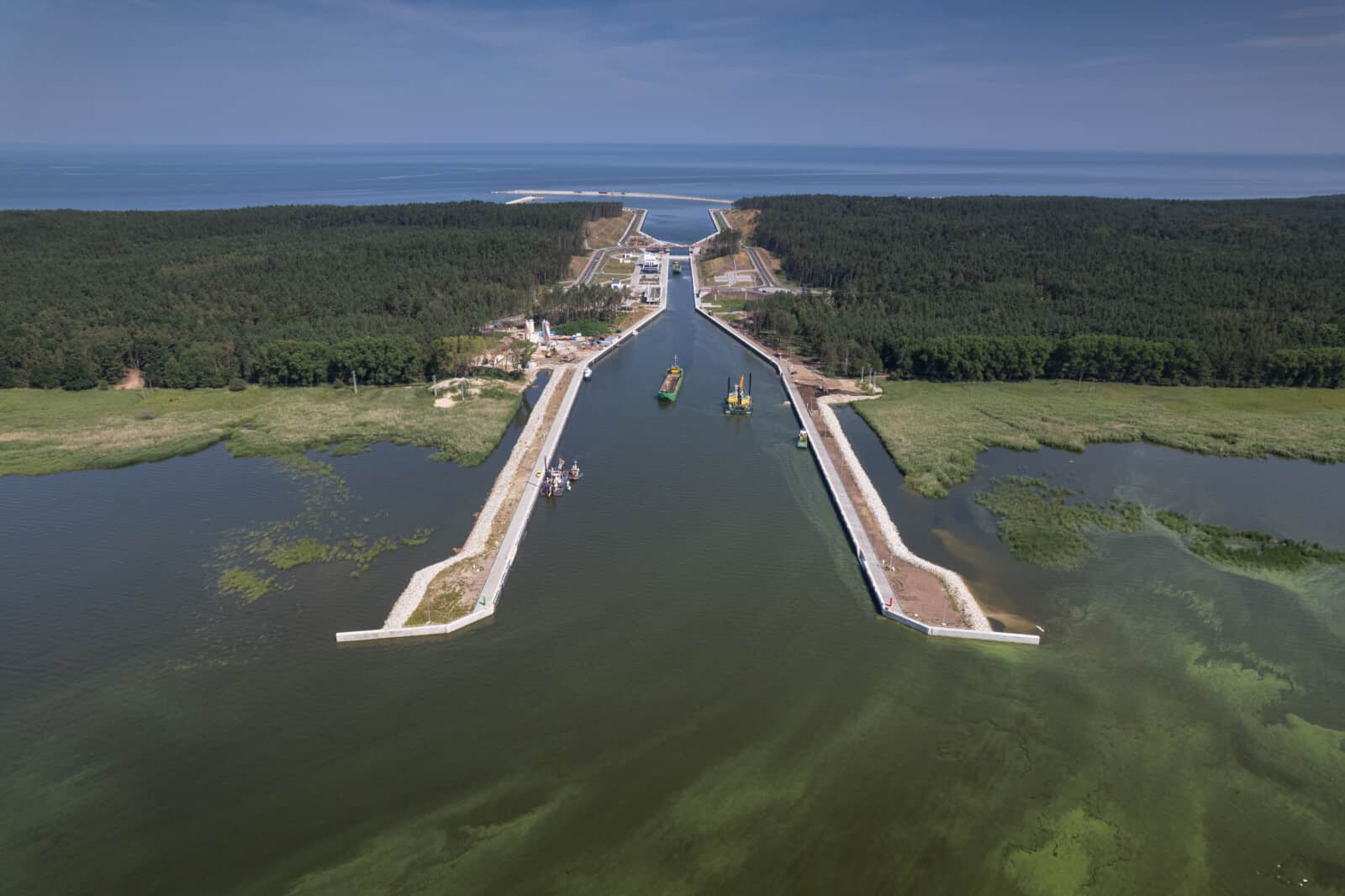 The new crossing removes the need to get Russian permission and also shortens the journey for shipping by over 100 km.NDI

Work on the Vistula Spit crossing began in October 2019. The cost of the whole investment was originally supposed to amount to less than PLN 900 million, but the total cost is set to reach nearly PLN 2 billion.

The new shipping channel will allow vessels with a draught of up to 4.5 metres, a length of up to 100 metres and a width of up to 20 metres to pass from the Gulf of Gdansk to the Vistula Lagoon, as well as barges of up to 180 metres.

There are hopes in nearby Elbląg that the crossing will revitalise the city's port.

However, in order to fully reap the benefits provided by the crossing, the Elbląg river is scheduled to be deepened from its current 3.5 metres to 5 metres so that larger cargo vessels can reach the port. 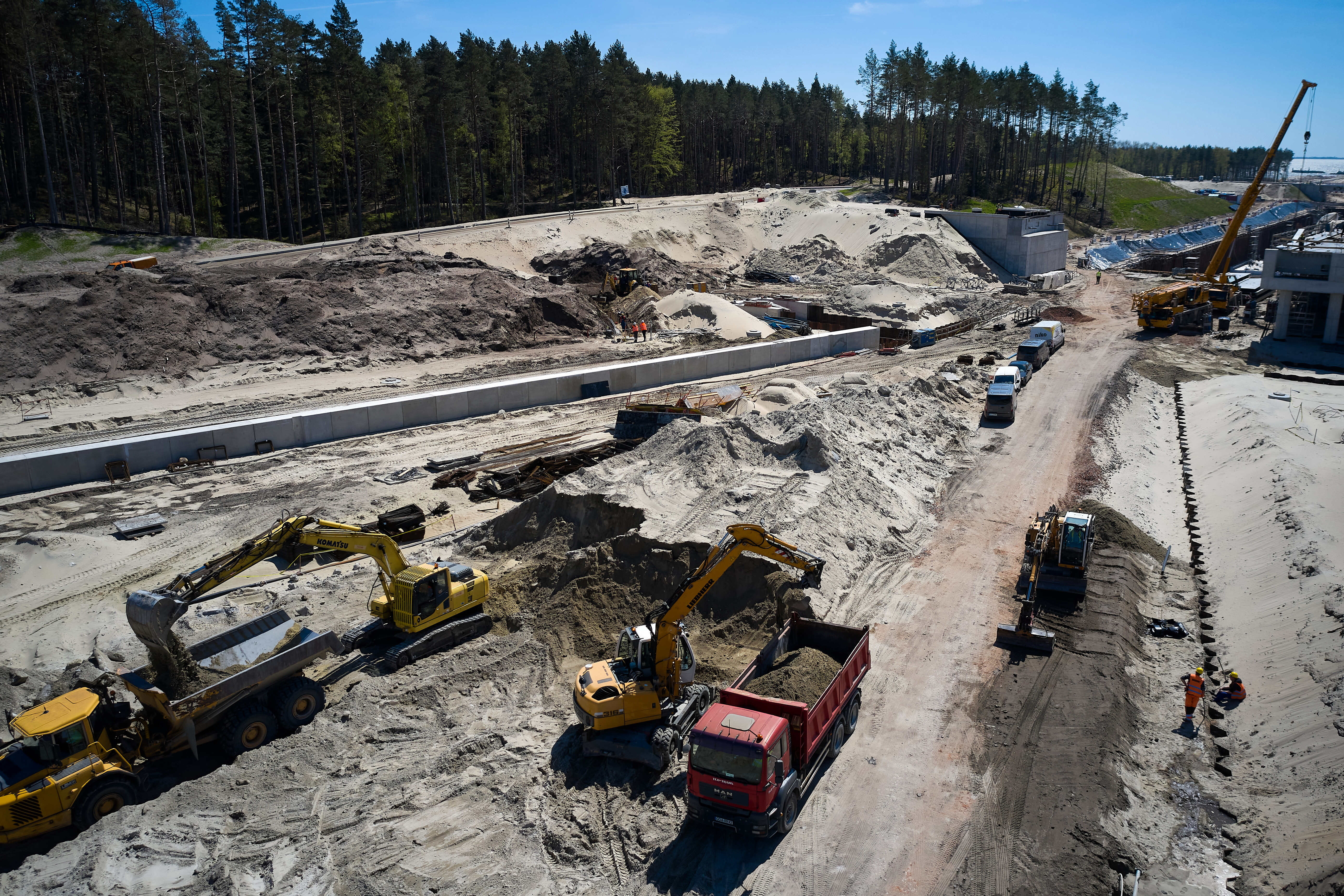 Work on the Vistula Spit crossing began in October 2019. The cost of the whole investment was originally supposed to amount to less than PLN 900 million, but the total cost is set to reach nearly PLN 2 billion.Adam Warżawa/PAP

The opening of the crossing is just the first phase of this investment. In April 2021, the Maritime Office in Gdynia signed a contract with Budimex as the contractor for the second stage of the project valued at more than PLN 574 million, with a completion time of 24 months.

The second stage envisages the reconstruction of the existing shipping channel along the Elbląg River.

Work will include shoring up the banks and constructing flood barriers and a swing bridge over the Elbląg River in Nowakowo, together with changes to the road system.