To mark the 30th anniversary of Lithuania’s Independence Day, an enormous illumination in Polish and Lithuanian has appeared on the front of the Presidential Palace in Warsaw saying Wolność Laisve (Freedom Lithuania).

The word "laisve" was displayed as it was written on the barricades that surrounded the parliament in Vilnius in 1991, when its defenders held off an attack by Soviet troops.

Posting on Twitter, Lithuanian president Gitanas Nauseda said: “I would like to thank Andrzej Duda for remembering the price of our freedom, which we won 30 years ago, on January 13.”

Freedom Defender’s Day, commemorated in Lithuania on the 13th January each year, honours those killed 30 years ago when unarmed civilians in Vilnius stood up to defend Lithuanian independence against Soviet forces attempting to seize control.

The tragic events, which occurred on the night between the 12th and 13th of January 1991, culminated in 14 killed and several hundred injured, when thousands of civilians went out onto the streets of Vilnius to peacefully protest and defend the parliament building, television tower, and buildings of state television and radio from Soviet army units who were trying to capture them. 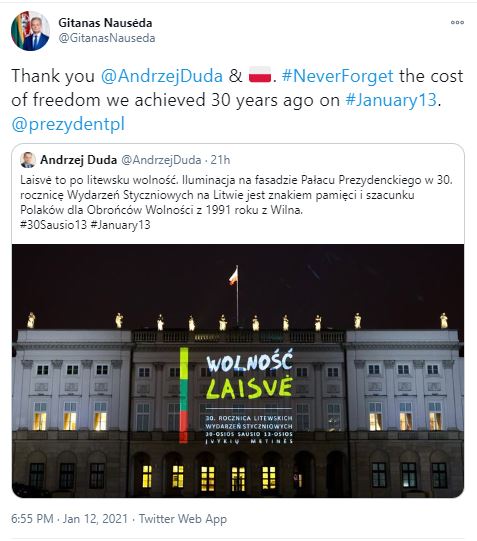 Lithuanian president Gitanas Nauseda thanked President Duda after the Polish president posted on Twitter: “Laisvė means freedom in Lithuanian. The illumination on the facade of the Presidential Palace on the 30th anniversary of the January Events in Lithuania is a sign of Poles' remembrance and respect for the 1991 Vilnius Defenders of Freedom.”Gitanas Nauseda/Twitter

Lithuania was the first country making up the USSR to declare its independence on the 11th March 1990 when the Lithuanian Parliament adopted a resolution to convert the Lithuanian Socialist Soviet Republic into the Republic of Lithuania and restored its traditional national symbols.

Lithuanian was followed in declaring independence by two other Baltic republics, Latvia and Estonia.

Democratic movements had been taking hold in Lithuanian from the late 1980s following Mikhail Gorbachev’s introduction of the politics of Glasnost and Perestroika which he hoped would build bottom up support for his political and economic reforms and help to strengthen the Soviet Socialist Party, but served instead to lay the groundwork for emerging independence movements.

Though it remains unclear what role Mikhail Gorbachev played in the January events in Lithuania, it is believed that, paralysed by the perspective of the break up of the USSR, he submitted to forces in the Krelim which sought to quash the independence movements in the Baltic Republics.

Official commemorations in previous years have included a wreath laying ceremony on Vilnius’s Independence Square followed by a mass at Vilnius Cathedral. Lithuanian’s have also sought to honour the victims each year through unofficial events such as the annual “Race of Life and Death” starting from the Antakalnis Cemeteray in Vilnius, where the victims are buried and a large Monument to the Victims of January 1991 is located.

Poland marked the day this year with a statement from President Andrzej Duda and by illuminating the Presidential Palace in Warsaw with the word “Freedom” in Polish and Lithuanian.