For Artur Sawastian these are hectic days. The phones at his company, he says, ring constantly every day as clients desperate to find people to work for them call in in the hope that some workers are available.

“At the moment we are overwhelmed, it’s a bit crazy,” Sawastian tells TFN.  “We don’t need to look to find the clients. The hard part is finding the right people to work for them.”

His firm, APS Profit, a human resources company based in Szczecin, is at the sharp-end of a surging employment market in Poland characterised by labour shortages that have left employers searching far and wide for employees, and a low unemployment rate.

In September the unemployment rate came in at just 5.8 per cent, according to the labour ministry, which meant that there were just 950,000 unemployed people in Poland.

The decline in the unemployment rate comes as testament to the economic progress Poland has made over the past 25 years, and current feisty state of the economy. On a darker note experts also point to the fact that the emigration of hundreds of thousands of Poles to other EU countries has helped keep the jobless rate down.

But the large number of jobs trundling onto the employment market has just about sucked the pool of “blue collar” workers, which traditionally provided surplus labour in Poland, dry leaving companies scrabbling around to find workers.

“Demand has grown a lot,” says Sawastian. “Basically at present we have so many position empty that employers are desperate to find people.”

He adds that sectors such as production and construction have been especially hard hit, but with labour shortages now being experienced across the board Poland is now looking to foreign countries to find the workers it needs. 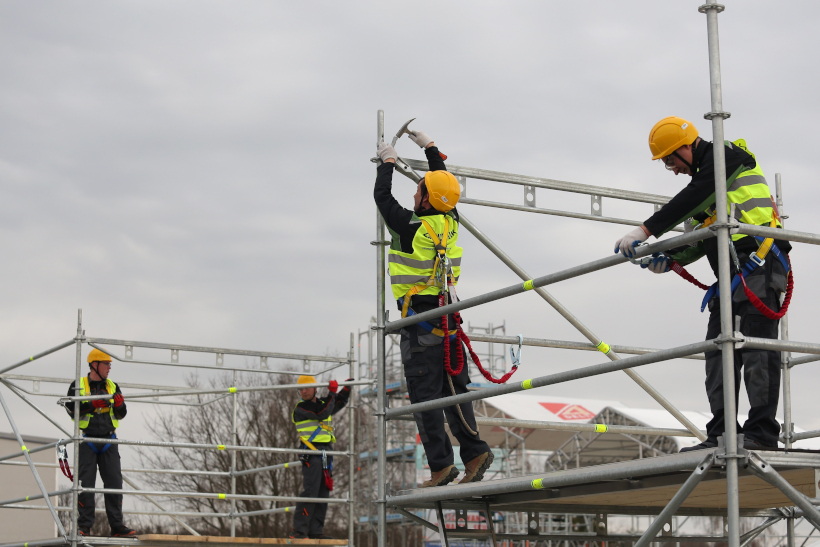 Sectors such as production and construction have been especially hard hit, but with labour shortages now being experienced across the board Poland is looking to foreign countries to find the workers it needs.Tomasz Waszczuk/PAP

The number of work permits issued to non-EU workers last year was 263,000, almost double the 2015 figure, according to figures from the Central Statistics Office, with 82 percent of them going to Ukrainians. Just how many Ukrainians now work in Poland is debatable owing to the possibility that many work in the grey economy but some estimates put the number over a million.

Earlier this year the government launched a new system to make it easier for workers from six countries—Ukraine, Belarus, Russia, Georgia, Moldova and Armenia—to get work permits and bring their families to Poland.

But relying on Ukrainians and other people from the ex-Soviet space to plug the gap in the labour market has so far proved to be inadequate. There are still jobs out that need to find a worker.

In 2017, over 13,000 work permits were issued to Indians, Nepalis and Bangladeshis combined, which was four-times more than in 2016. For people in Warsaw the sight of men from the Asian sub-continent zipping around the city on bikes with UberEats boxes strapped to their backs has become a familiar sight, and perhaps the most obvious example of how international the hunt for workers has become.

Asian workers also have the advantage over Ukrainians in that they are in Poland for the long term. Many Ukrainians, knowing they can always find work in Poland whenever they need it tend to, flit back and forth between Poland and home.

This makes life easy for them but creates headaches for employers who often want workers they can rely on for long-term projects. Indians, however, who are a long way from home, commit themselves to a year, or sometimes longer, and so provide firms with a reliable and loyal workforce.

As competition among firms for workers has increased, salaries have started to rise.

Statistics office figures show that from August last year to August 2018 the monthly wage in the construction sector rose by 10.4 percent.

While this was the biggest increase, other sectors also posted significant hikes in the average pay packet. Wages in the production sector increased by 7.3 percent for the same period while salaries in the transport and warehousing sector went up by 5.5 percent.

Despite the increases in pay packets it remains hard to find Poles to take the jobs. Sawastian says that in his experience he has found that it “impossible” to find Polish workers because their salary expectations are just “too high”.

Poland biggest exporter of chocolate in CEE and fourth in the world – and it’s eating more of it too!