The removal of architectural barriers, installing of lifts and ramps, signs in Braille and contrasting colours are just some of the solutions being adopted by Polish State Railways at train stations, to make them more accessible to all groups of travellers.

The rebuilding of Kraków, Gdynia and Wrocław train stations were amongst some of the first investments in which emphasis was placed on adapting rail buildings for disabled travellers. Elements supporting travellers with limited mobility were also employed by 100 further investments made by Polish Railways between 2010 and 2015.

But the real revolution is as a result of the Station Investment Programme (PID) for the years 2016-2023, which encompasses the modernisation and building of nearly 200 ‘friendly’ train stations around Poland.

Prior to commencement of work under this programme, the aims were written into the document, “Good Practices for Railway Investments of Polish State Railways.”

At the same time, designers and constructors were made aware of the necessity of adjusting the rebuilding of railways according to guidelines articulated by TSI-PRM – EU norms regarding adapting infrastructure to provide a service to people with restricted mobility.

As a result, buildings modernised as part of the PID must fulfil the highest standards in this regard. Adapting historical buildings, which constitute more than 50 percent of railway stations in the programme, is a challenge. 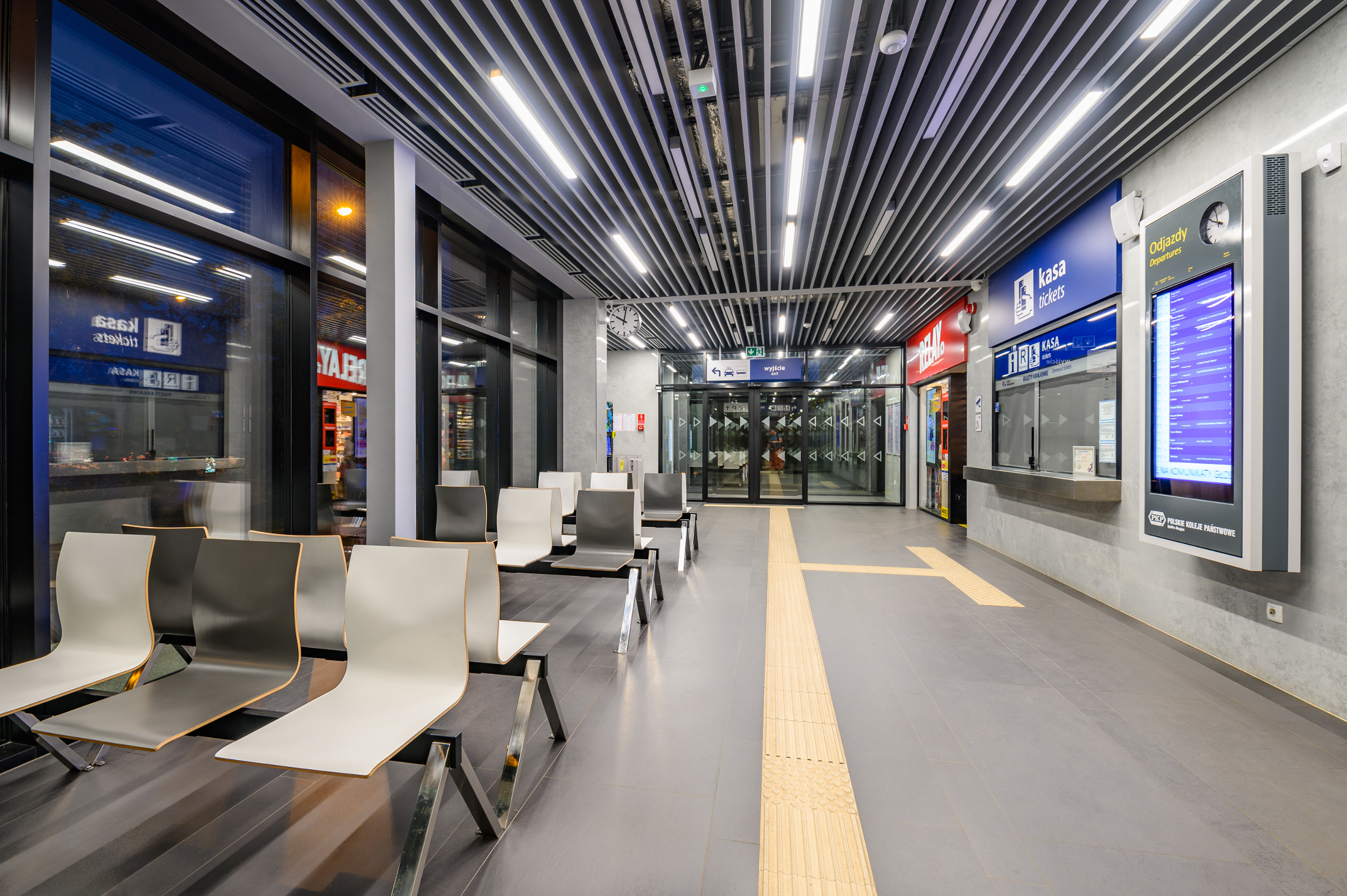 The removal of architectural barriers, installing of lifts and ramps, signs in Braille and contrasting colours are just some of the solutions being adopted by Polish State Railways at train stations, to make them more accessible to all groups of travellers.PKP SA

When designing, it is necessary to highlight existing architectural barriers (thresholds, incorrect door widths, lack of direct parking spaces and access to the station), and also to employ a series of solutions which were not used previously when rebuilding stations, such as lines using focal points to guide, signs written in Braille, maps of the station, contrasting colours in the interior, automatic doors and specially adjusted toilets.  It is necessary to combine it in such a way as to make stations accessible to all travellers whilst retaining the historic character of stations and do all works in line with guidance from the conservator.

Of course, not all investments realised by Polish State Railways are for historic stations. Completely new buildings are also being built as part of the programme. The largest group of these are Innovative Station Systems (IDS), of which there will be around 40 in total. These will be buildings on one floor with a clear and simple spatial layout.

The aims of IDS’s foresee a variety of improvements which must be used in each of them. The use of contrast colours will enable the visually impaired to better move around the station. There will also be lines which guide those same disabled travellers and touch maps.

An important element supporting this group of users will also be signs written in Braille. The solutions employed in IDS stations will enable people to better move around at six stations: Oświęcim, Sędziszowo Małopolskie, Bielska Podlaska, Nidzica, Czeremsze and Janikowo and later stations will be added at another long list of locations.

Up to now, as part of the PID for the years 2016-2023, 26 stations have been rebuilt including the six described above. In 2021, 41 more stations will be added, although there are already 540 stations which possess elements making it easier for those with disabilities. For example at 60 percent of stations there is already easy access to the building for those using a wheelchair and nearly 50 percent of station have disabled parking space.

Rafał Zgorzelski, member of the governing body at Polish State Railways said: “As part of increasing the accessibility of stations, an enormous change in quality will be seen with the end of the Station Investment Programme, altogether over 400 stations – so 70 percent of stations governed by Polish State Railways – will be accessible for people with mobility issues. In the case of other adjustments such as special lanes for visually impaired, the number of stations which will possess this solution will grow to over 150 percent.

“The aim of all investments and processes is the full adaptation of station infrastructure for the needs of the disabled, which is one of the strategic aims of Polish State Railways in the upcoming years.”

Apart from the PID, a series of smaller scale investments will be made at specific locations. For example as part of the Solidarity Fund for Supporting Disabled People, a few dozen buildings will be fitted with elements enabling easier use of the infrastructure, such as lifts, automatic doors and adapted toilets. Training sessions will also be held for PKP workers and at selected stations a pilot help service will be run by dedicated individuals.

Polish State railways will also take part in international seminars supporting the sharing of good practices and service standards for the disabled, such as the EU project In2Stempo (an innovative solution for railways stations) and MaaSive (work on the conception of applications for passengers to track their journeys, reservations, sale of tickets and planning their journey) as well as other international projects run by the International Association of Railways.

This article was sponsored by Polish State Railways.