Exhausted but exhilarated, the Polish crew of a vintage biplane landed back in Warsaw early yesterday evening after successfully re-enacting a historic flight that took them from the Polish capital to Tokyo and then back again.

Seeking to emulate the achievements of Bolesław Orliński, a pioneering aviator that first completed the route in 1926, the team was captained by 61-year-old Romauld Koperski, a well-known reporter and adventurer whose exploits have included solo attempts to paddle the Pacific and a Guinness record for the world’s longest piano concert.

Although ill health forced Koperski to retire from this latest challenge at an early stage, the rest of the crew opted to plough on. Failure was never considered. “Aside from anything else,” joked one pilot, Mariusz Hercog, “we’re an optimistic bunch.” 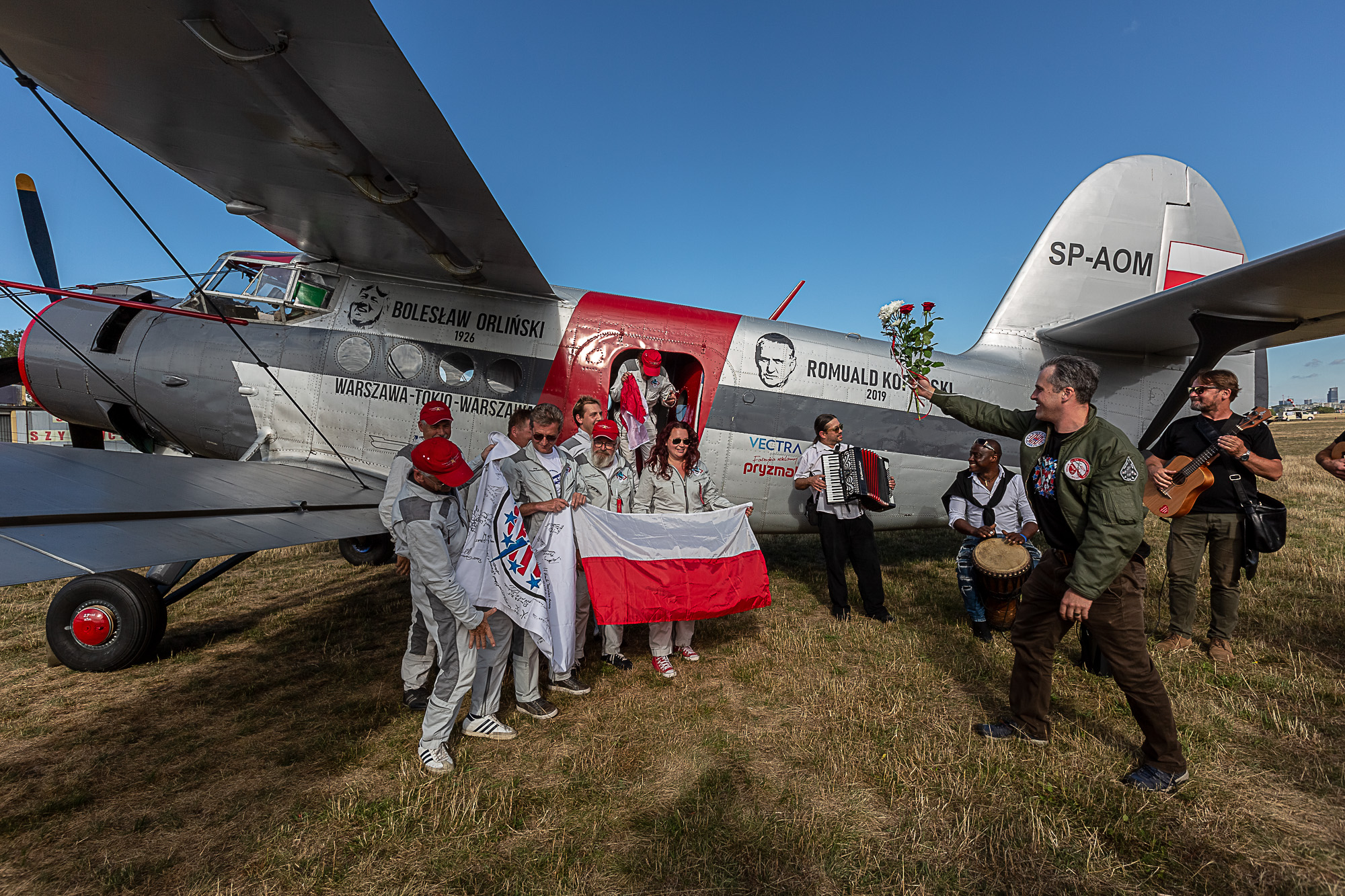 The crew were met with flowers, applause and a four-piece band.Kalbar/TFN

Comprising of 16 members in all, flight duties were rotated between the team with some of the crew joining for only select legs of the journey. Having left Warsaw on May 28th, it took the pilots approximately 200 flight hours to complete their 24,000 kilometre odyssey.

Speaking to TFN, Hercog admitted that he was awestruck by Orliński’s original achievement: “Not only was our team far bigger, we always had that choice of simply quitting if we wanted – for Orliński, that luxury didn’t exist.”

Accompanied by a mechanic by the name of Leon Kubiak, Orliński flew a Breguet 19 A2, a light bomber capable of covering long distances. After sustaining damage over Siberia during the return, the final 6,680 kilometre stretch back to Warsaw was only made possible after the pair patched up their aircraft with wire and glue. 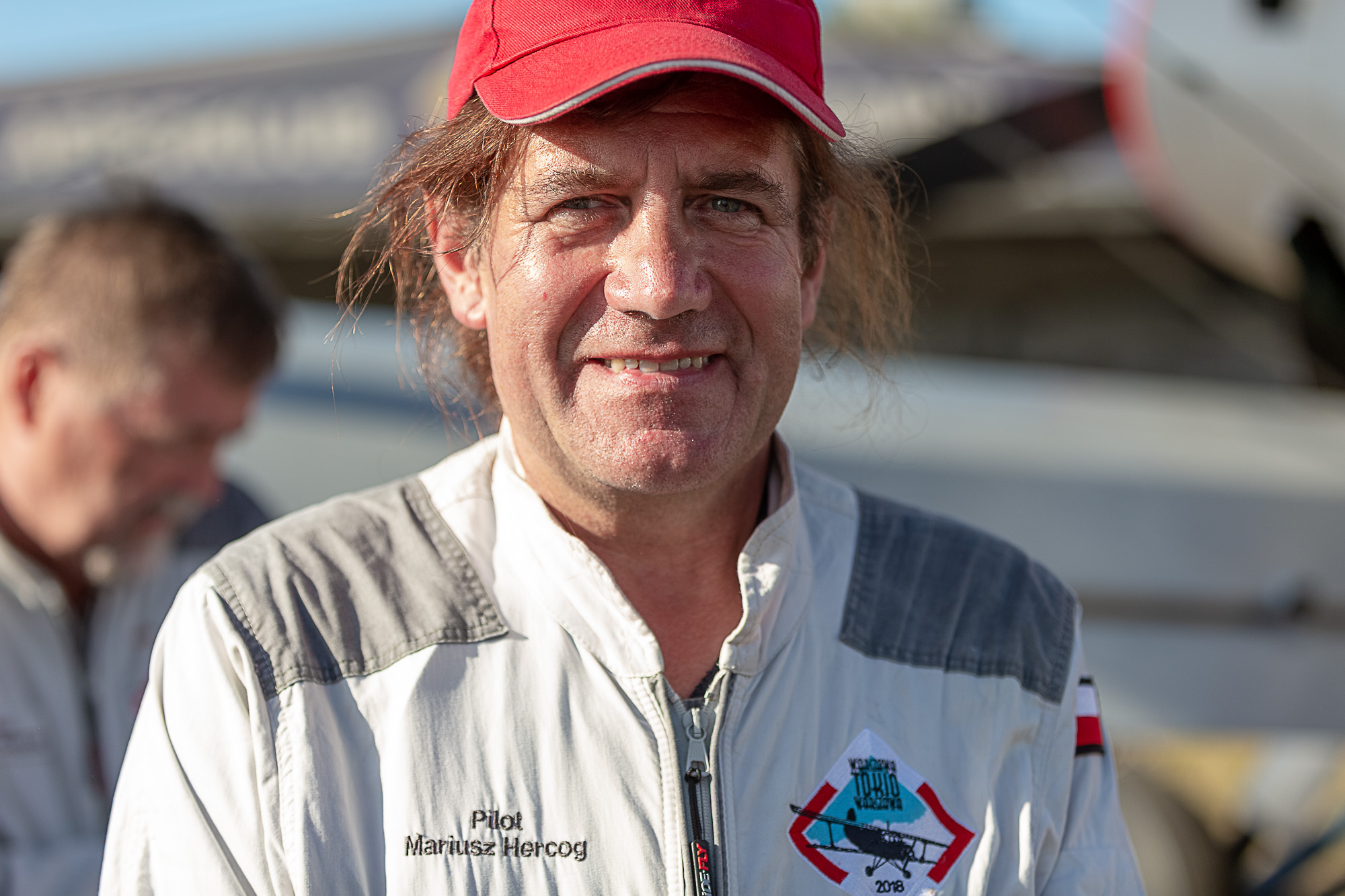 Although ill health forced Koperski to retire from this latest challenge at an early stage, the rest of the crew opted to plough on. Failure was never considered. “Aside from anything else,” joked one pilot, Mariusz Hercog (pictured), “we’re an optimistic bunch.” Kalbar/TFN

Funded by the government, Orliński’s flight was intended as a bold statement that would thrust independent Poland deep into the world’s consciousness.

It did just that, and Orliński was greeted by a jubilant crowd of thousands when he touched down at the now defunct Mokotów Airport.

Awarded the Legion of Honour by the French and The Order of the Rising Sun (6th class) by the Japanese, his feat made global news.

Pertinently, it inspired a new generation of Poles to become pilots, something that would hold the Allied Forces in good stead during the next World War (Orliński himself would later commandeer the RAF’s 305 Polish Bomber Squadron during WWII). 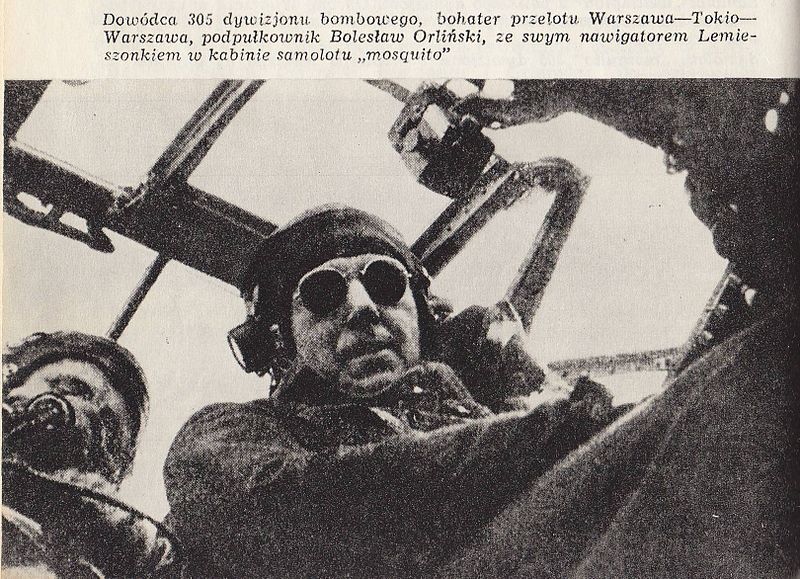 The pilots were recreating the 1926 flight made by aviator Bolesław Orliński who was later awarded the Japanese Order of the Rising Sun Sun 6th Class and the French Legion of Honour.Public domain

Naturally, Orliński’s story has captivated Polish aviation buffs ever since, with the idea to recreate the flight first hatched after one of the key organizers, Mariusz Nawrocki, purchased the aviator’s former home on Warsaw’s ul. Racławicka.

“Having discovered who used to live there I started reading up on Orliński, and soon after I was introduced to Romauld Koperski” recalls Nawrocki. Born from this string of serendipitous chances, the pair started toying with the idea of mimicking the epic flight.

From there, events snowballed with more and more people actively joining the project. Privately funded, with many of the team investing their own money into the operation, an Antonov An-2 was acquired for the purpose of the journey. 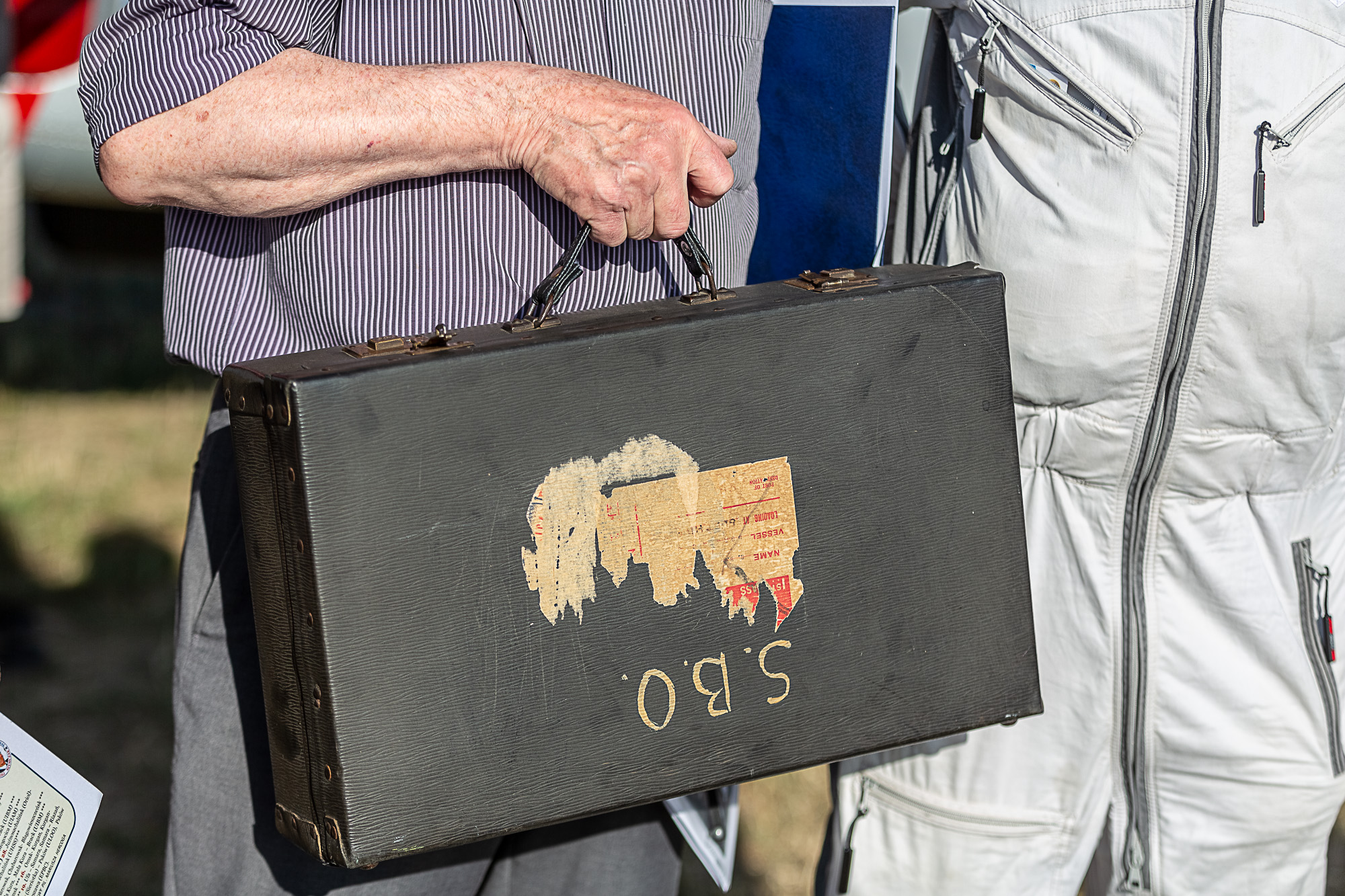 Though having passed away in 1992, Orliński’s original suitcase – containing, among other things, his pilot’s license – accompanied the crew on every step of their expedition.Kalbar/TFN

A single engine biplane dating from the 70s – but equipped with a 1950s engine – it was the closest they could find to Orliński’s original plane.

“It’s a better plane than Orliński’s,” says Nawrocki, “but that’s not to say this journey wasn’t risky.”

Taking a couple of weeks longer than first forecast, the challenges faced didn’t merely involve inclement weather and antiquated equipment, but also awkward flight restrictions over Russia that would frequently change on a whim.

“Nonetheless,” says Hercog, “absolutely every pilot we encountered and every air club we visited treated us brilliantly.” 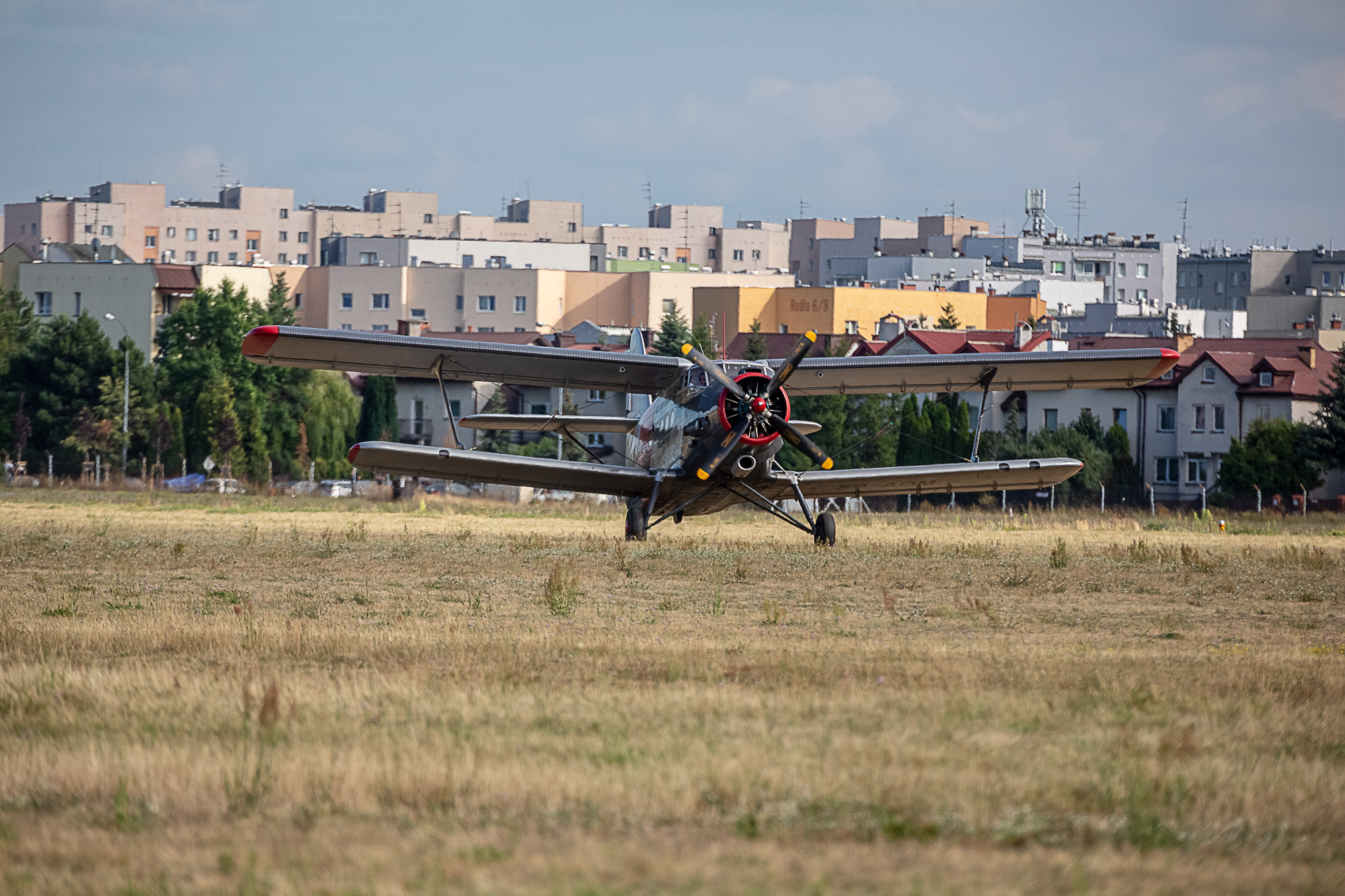 Their Antonov An-2 single engine biplane dating from the 70s – but equipped with a 1950s engine – was the closest they could find to Orliński’s original plane.Kalbar/TFN

So too, it would seem, did the spirit of Orliński. Though having passed away in 1992, his original suitcase – containing, among other things, his pilot’s license – accompanied the crew on every step of their expedition.

Landing to raucous applause at Bemowo airfield, it was a fitting tribute to see the case held aloft as the pilots clambered from their craft.