Out of the ashes: new exhibition highlights Warsaw’s Muranów district, once the centre of Warsaw’s Jewish life, and once reduced to rubble

After three months of closure, the world famous POLIN Museum of the History of Polish Jews in Warsaw re-opened its doors on June 26. With the award-winning permanent exhibition still off limits, visitors instead are invited to take a journey into the district that the museum calls home in a new temporary exhibition – ‘Tu Muranów’.

When Spanish novelist Carmen Laforet travelled around Poland in 1956 and visited Muranów, seeing young mothers and children playing, looking at the lush greenery, she wrote “this is the happiest place in all of Warsaw”.

Yet, this unique place is one of sadness and tragedy. From its Venice-inspired beginnings in the 18th-century, by the end of the 19th it had become home to the largest Jewish communities in Europe with around 330,000 people.

When the Germans built a wall around the area, known as the Northern District at the time, it became the largest ghetto in German-occupied Europe.

By mid-1943, almost the entire Jewish population of Warsaw had been murdered in Warsaw, gassed in Treblinka or killed in fighting in the Warsaw Ghetto Uprising, the largest act of Jewish resistance during the Holocaust. 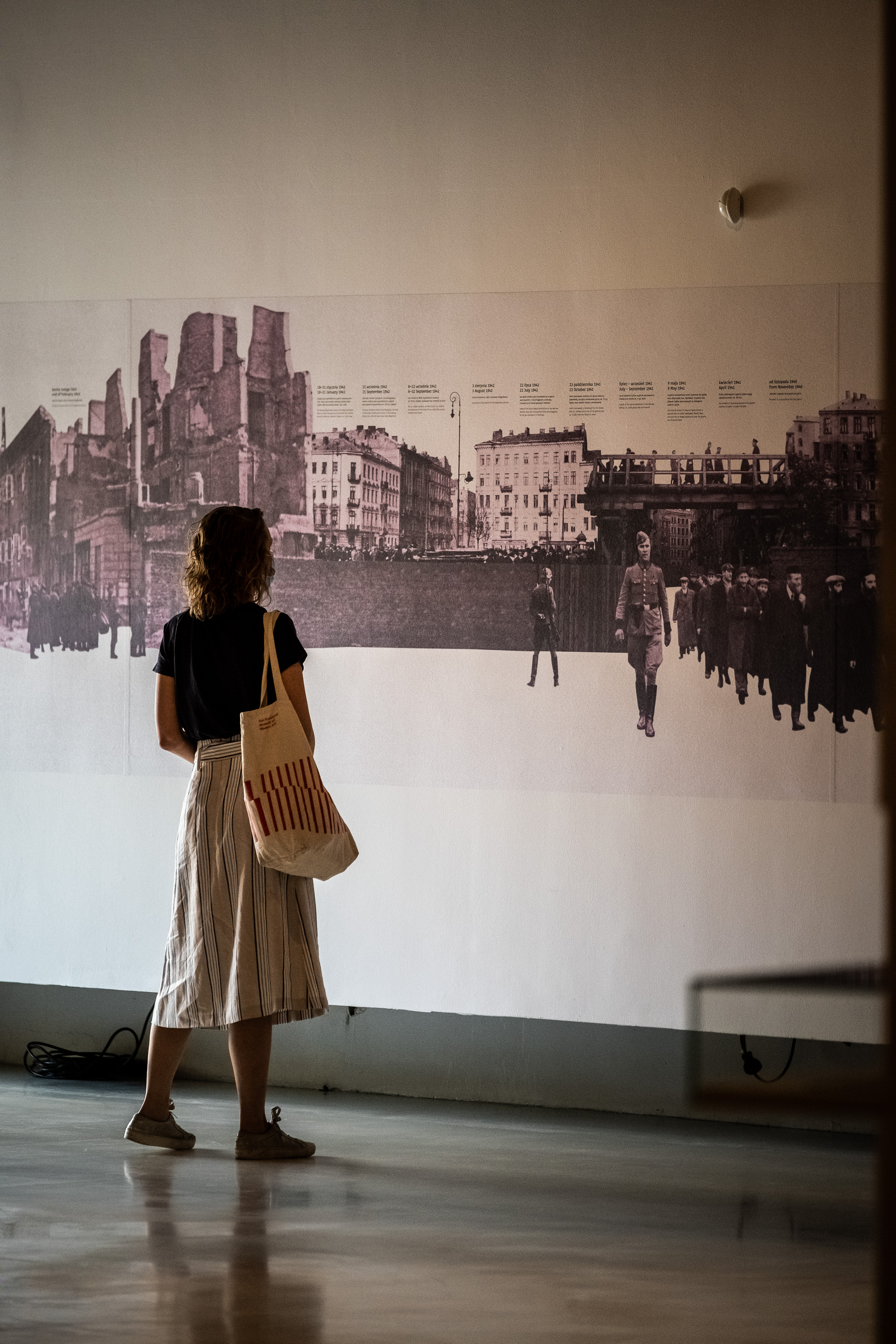 The district was the centre of Jewish life before the war, but it, along with its population, was razed by the Nazis.Kalbar/TFN

The few who survived this Armageddon were flushed out of bunkers and hiding places that pitted the district’s crust.

In an act of hate-filled ritual cleansing, the Germans levelled the district with astonishing rigour with the aim of leaving no brick on top of another.

The new modernist district of Muranów that was built on the rubble is often described as a palimpsest, yet a palimpsest is a new layer on which the earlier form can be traced.

What is striking about Muranów is that its modern layout of streets bears little resemblance to the lost world that preceded it.

The blocks made of ground rubble and concrete, possibly mixed with the bones of ghetto victims, are perched on piles of rubble that cash-strapped post-war Poland had not the means to remove. There is little suggestion of what came before. 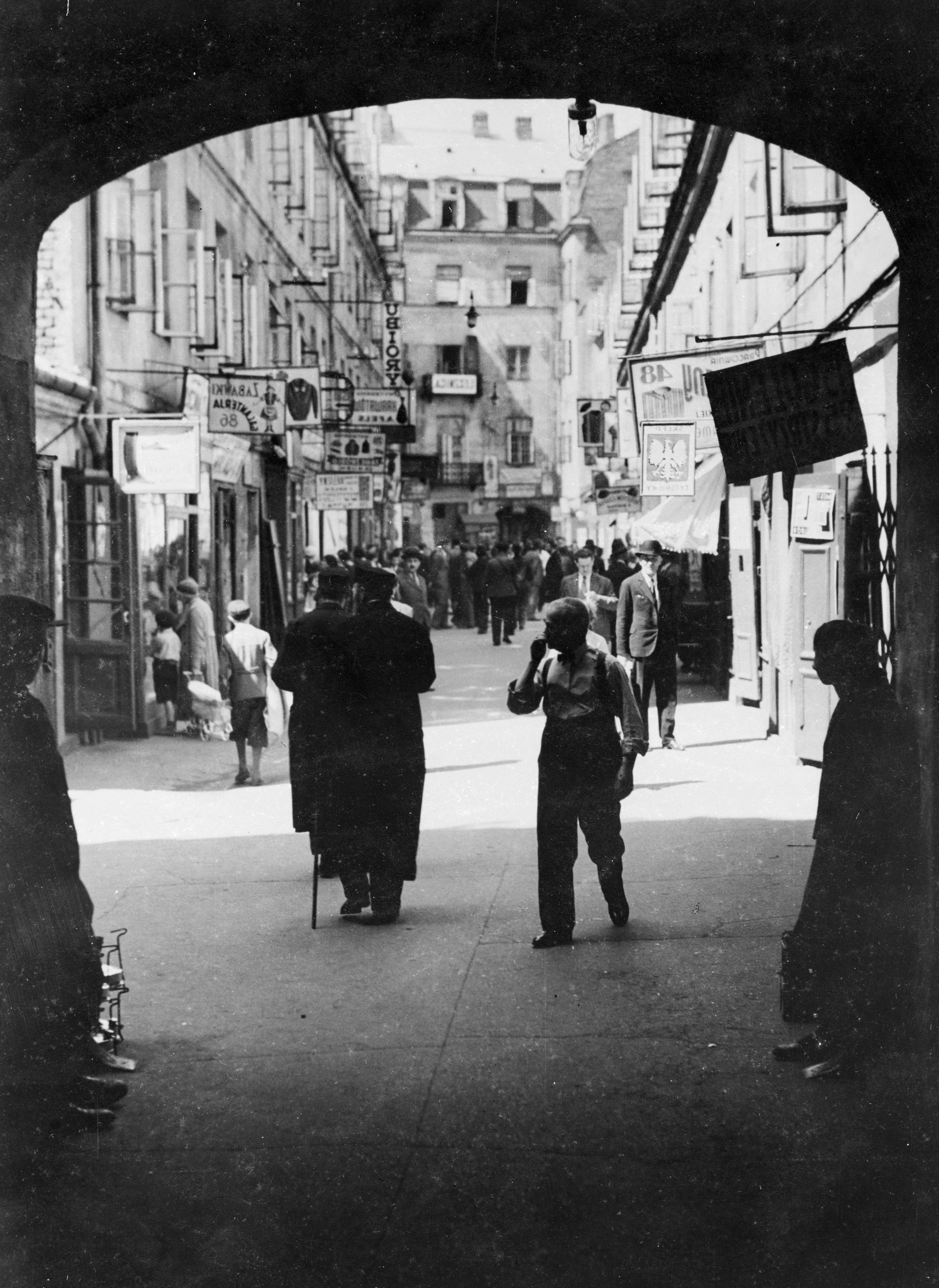 Jews started to congregate in the Northern District after 1862 when the Tsar abolished all restrictions on Jewish residence.Public domain

For example, Nalewki, the centre of Jewish life and trade before the war, has its namesake in today’s Muranów, but it lies in a different place altogether. Part of the pre-war Nalewki can be seen behind the Arsenał building on Plac Bankowy.

Now called ulica Bohaterów Getta, the cobbled road with its original tram tracks is empty and serves no purpose other than memory.

‘Tu Muranów’ tells the story of this unique place by revealing these fascinating but tragic layers.

Joanna Fikus, Head of Exhibitions at POLIN, told TFN: “It was obvious that when we built the museum it should be in the middle of the pre-war Jewish district. Then we built it and people asked why is the museum here, what is the story of this place?”

An additional impulse for the exhibition comes from the archaeological work carried out on the site on which the museum was built, many of the finds from which visitors can see. 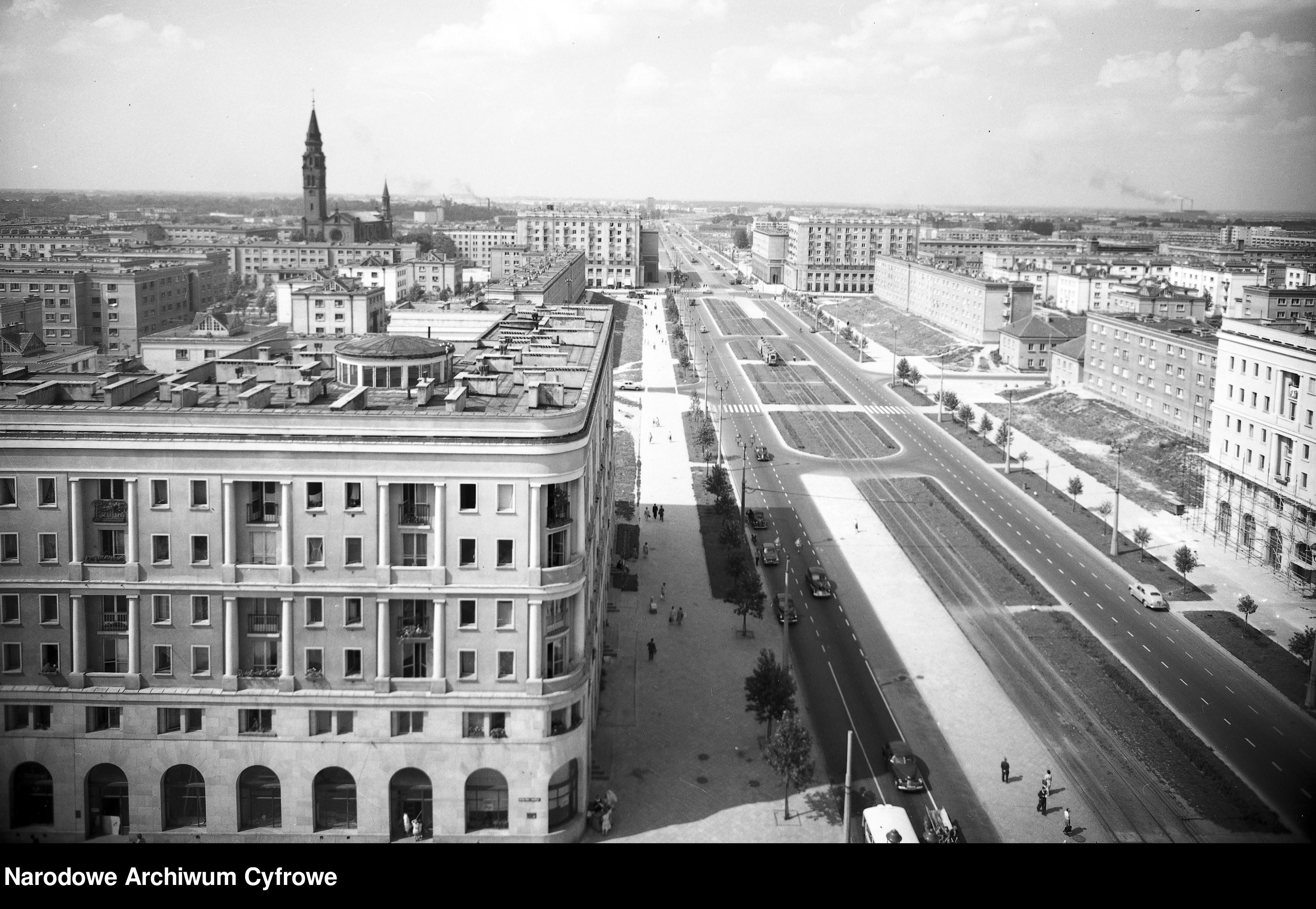 Muranów was rebuilt from scratch after the war.NAC

“Objects or remnants of objects that were found during archaeological excavation when we were building the museum have such a big story behind them. If you have a button or a spoon, who was the owner, who was touching it, what is the story of this person,” Fikus said.

It is an irony of history that Muranów, which has come to be forever associated with Europe’s largest ghetto, can trace its origins to Europe’s first.

In 1686, the Venetian Simone Giuseppe Bellotti, court architect of Polish kings Michał Korybut-Wiśniowiecki and Jan III Sobieski, built a palace in Warsaw and named it in memory of the island of Murano, which belonged to his native Venice.

It was there in 1516 that Jews were segregated in an area called Ghetto Nuovo. The word ghetto is believed to be linked to metal casting, which has a longer history in the area than Jewish settlement.

Jews started to settle in Muranów long after they arrived in Warsaw. Initially they lived on ulica Żydowska just beyond the walls of the Old Town. 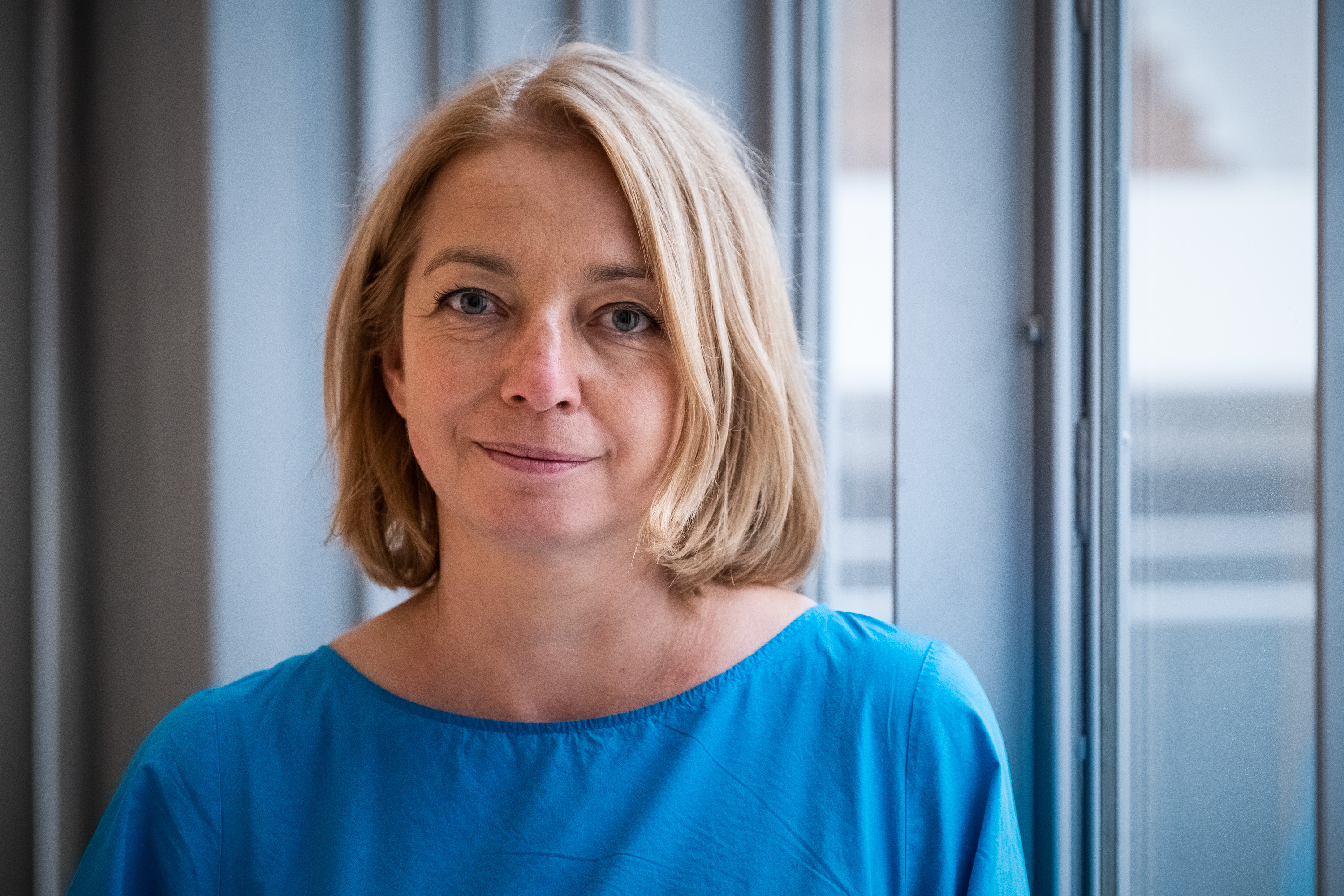 “The people of Muranów have very strong feelings about the district and they are fully aware of its history,” says Joanna Fikus.Kalbar/TFN

They were forced to leave in 1527 by the decree ‘Non Tolerantis Judeis’. From that time until the 19th century, they lived in various ‘jurydyki’, or private towns owned by magnates.

Jews started to congregate in the Northern District after 1862 when the Tsar abolished all restrictions on Jewish residence.

Soon, streets such as Nalewki, Nowolipie, Nowolipki, Wołyńska and Dzielna came to symbolise everything that we know as Jewish Warsaw: busy, narrow streets, tenements, deep courtyards, street trade, and a multitude of languages.

Each tenement, which could have up to three connecting yards, was like a small town, or shtetl.

“Nalewki 15 had 1,500 inhabitants at the beginning of the century. Each of them had flats, shops and workshops as well as entertainment and cafés. At number 15 there were baths, the sign ‘European Bathing’ hung above the entrance,” said Professor Leociak, one of the exhibition’s originators. 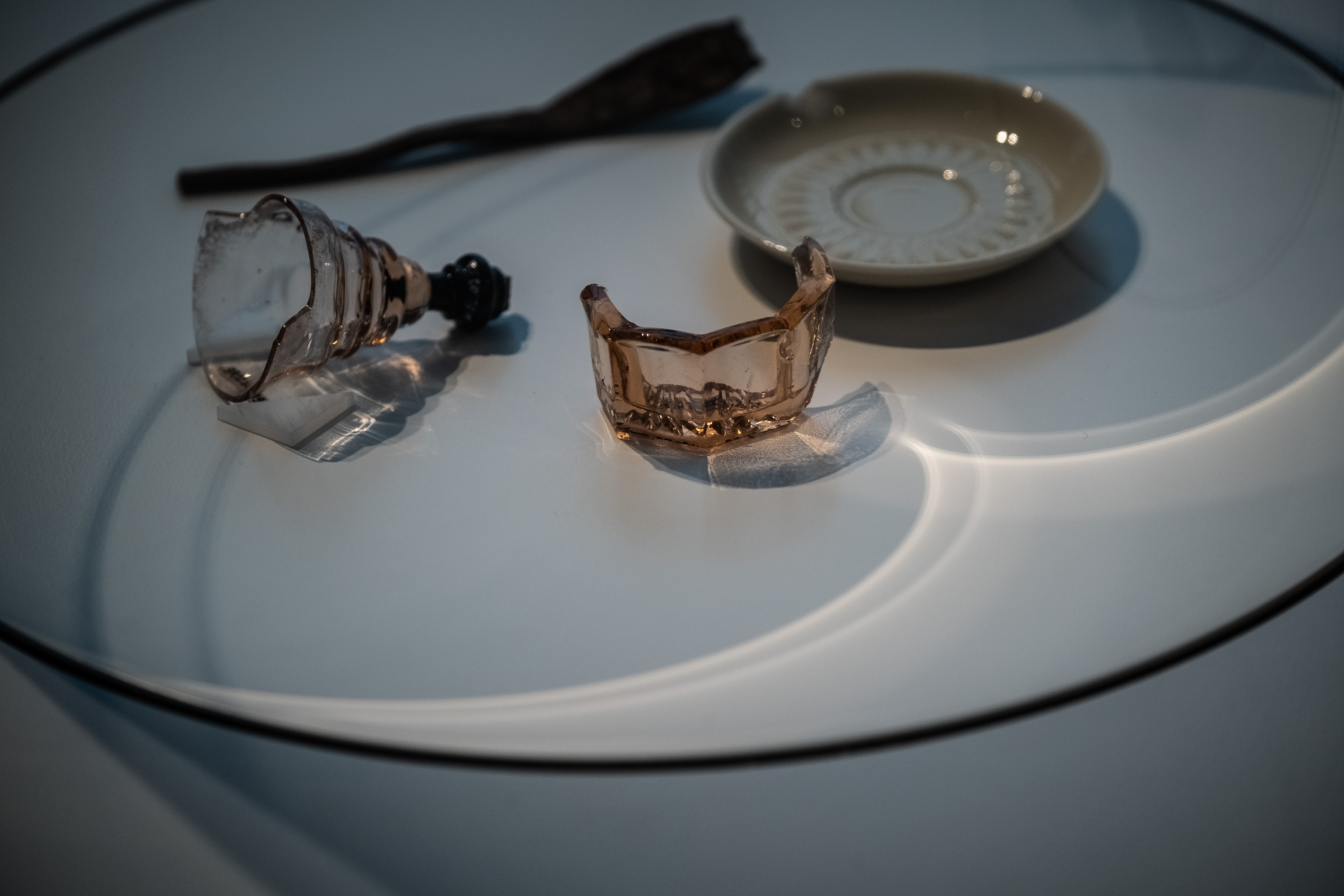 Excavation works around the district have found little pieces of history.Kalbar/TFN

The Jewish residents, always with a liking for biblical metaphor, saw the district in mythological terms. After their exodos from the Old Town and years of wandering they had found their promised land.

Nalewki was its Nexus, bringing together the Orthodox, who would visit for essential shopping, and emancipated Jews attracted by the bars and cinemas.

It was also a portal through which Gentiles would pass to take advantage of the cheaper prices and access to handcrafted goods.

After the Germans turned the district into a vast sea of rubble, post-war planners had to answer the question of what to do with it.

“For the first three post-war years, no one had any idea,” said Beata Chomątowska, another of the exhibition’s originators. “It was no man’s land. The whole area was rubble and a free reservoir of bricks and building materials for people who came on horse-drawn wagons to build makeshift shelters on the outskirts.” 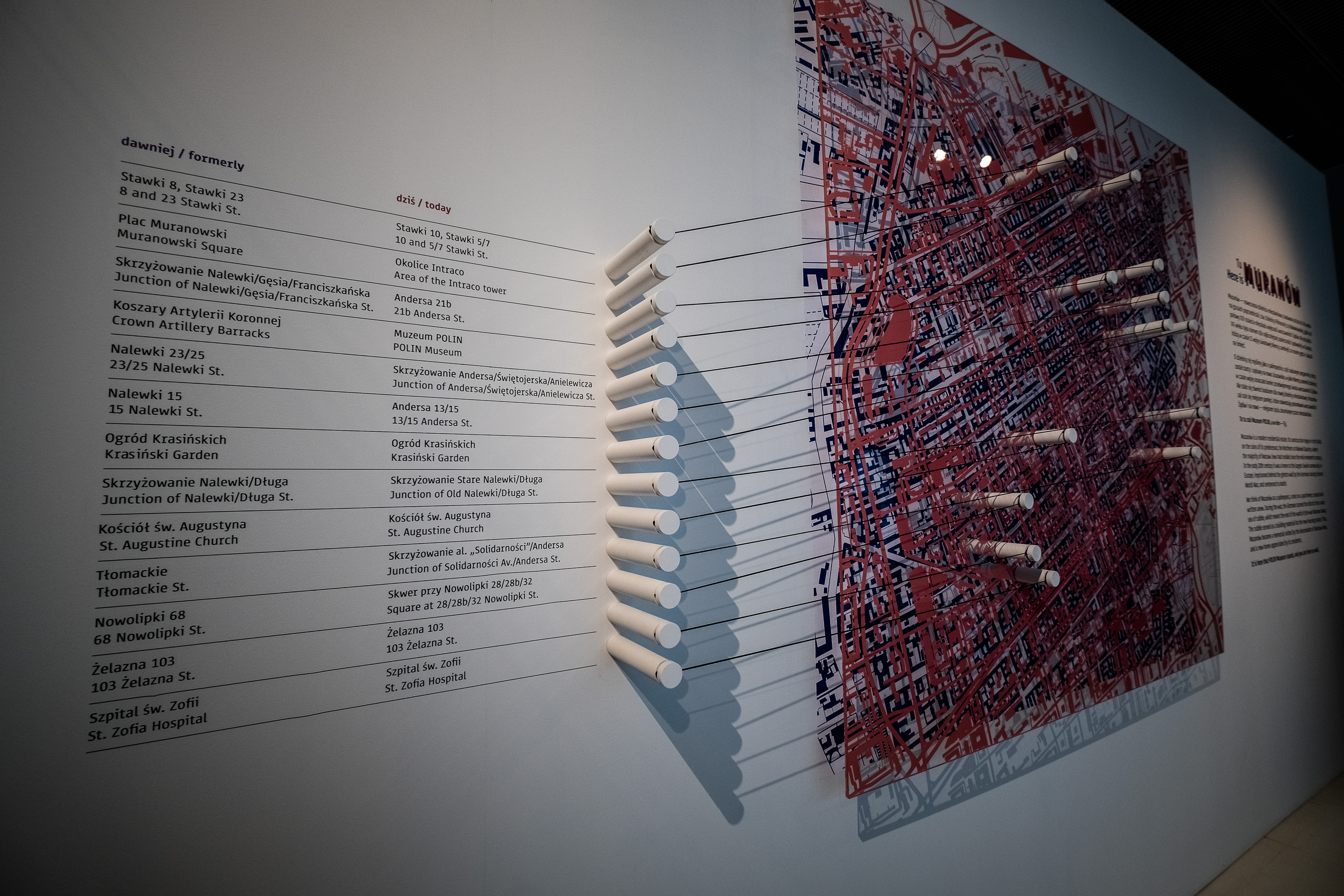 The modern street plan has little in common with its pre-war counterpart.Kalbar/TFN

There was little enthusiasm for rebuilding. The narrow streets and cramped conditions held little charm for mid-century minds.

The discussion was dominated by modernists, who even before the war dreamt of rebuilding Warsaw in the spirit of the new age. Muranów was an ideal blank slate.

Polish architect Bohdan Lachert was given the task of designing the new residential district. However, he faced a problem. The debris of the war could not be removed quickly enough to create an ideal flat building surface.

Chomątowska says that “it was estimated that the amount of rubble in Muranów was enough to fill sixty towers the volume of the 16-storey Prudential building. In some places the rubble reached as high as three or four storeys.”

Other figures put the amount of rubble at three million square metres. 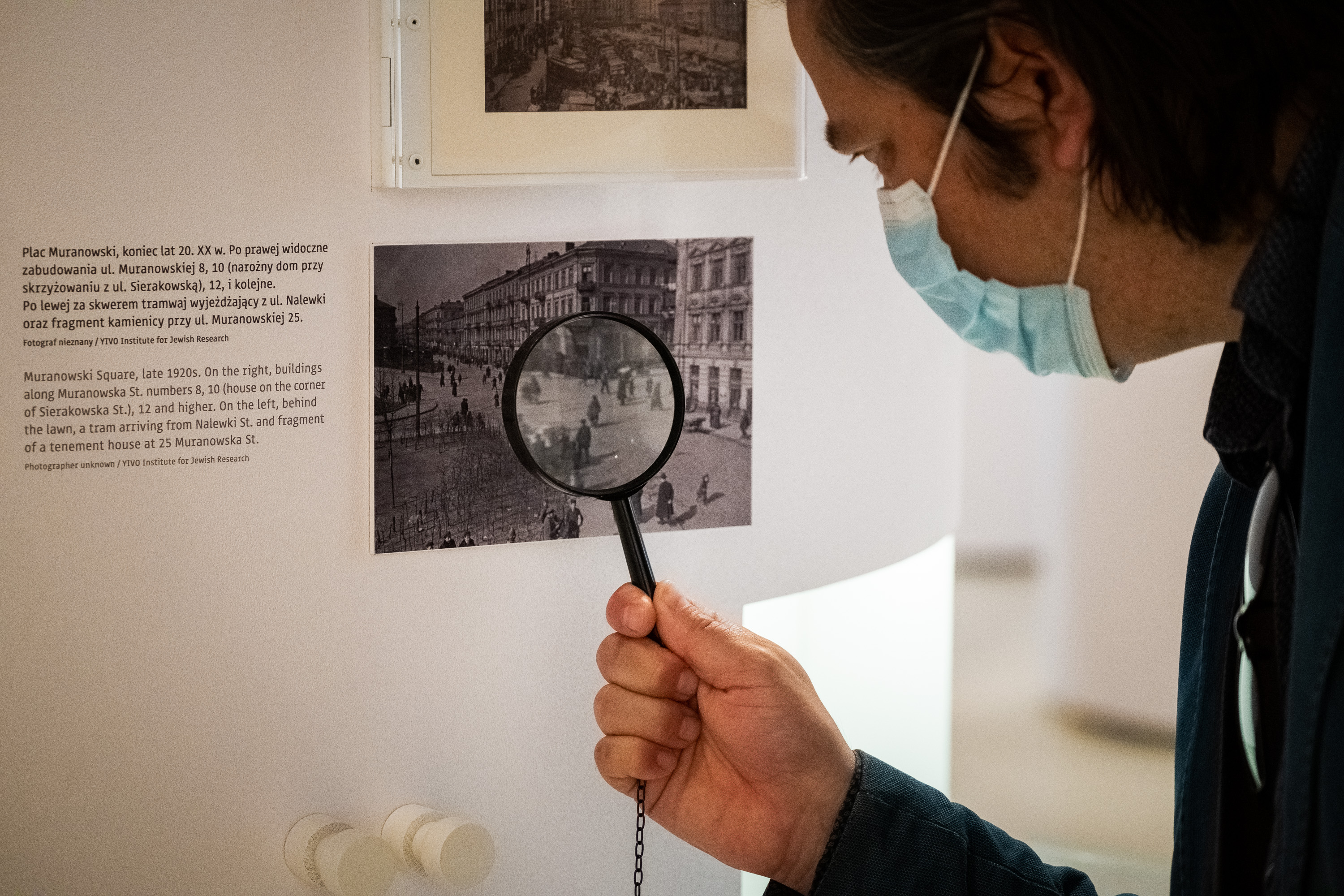 The district was also a portal through which Gentiles would pass to take advantage of the cheaper prices and access to handcrafted goods.Kalbar/TFN

Lachert’s idea, therefore, was to use the rubble as a plinth on which the new estate would stand as a monument to Warsaw’s Jews. The rubble was to be ground with concrete on site to make something the Poles coined ‘gruzobeton’, or rubble-concrete.

The rubble was ground in special milling machines, in which it was crushed into one of three grades: a fine dust for materials requiring higher strength, a medium grade for concrete materials such as bricks and blocks and a third grade for dumping on roads as a base for the road surface.

Lachert wanted the “horror of dead mountains” as he called it to remind the next generation of what happened there. Muranów was to become a memorial.

To achieve this, he wanted the buildings to remain unplastered so that the blood colour of the brick would symbolise the Jewish blood spilled in the ghetto.

However, it was also supposed to be a place for a new generation of people to live. The estate should therefore have wide streets, paths and greenery where people could meet, talk and live.

When the authorities enforced socialist-realism, the official Communist style of art that glorified the emancipation of the proletariat, an embittered Lachert was forced to backpedal. Instead of blood-raw facades, the buildings were slapped with a mask of ideologically decorated plaster. 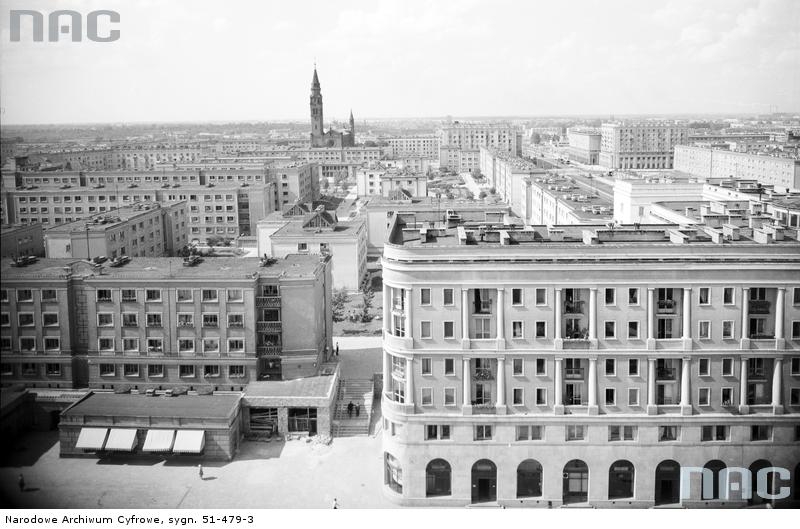 The modernist ideals of space and greenery created a district that has overwhelmingly added value to the generations that have lived there.NAC

However, the modernist ideals of space and greenery remained creating a district that has overwhelmingly added value to the generations that have lived there.

“The people of Muranów have very strong feelings about the district and they are fully aware of its history,” says Fikus. “When they were asked recently in a survey about the future, they were unanimous in saying that they wanted nothing to change.”

This wish is under threat now, as modern developers have been eyeing greedily the spaces between buildings. Short-term tourism rentals have also sucked a little of the authenticity out of the area.

However, placed against one of Poland’s other large post-Jewish districts, Muranów is fairing well.

“Compared to Kazimierz in Kraków, the main difference is that Kazimierz was not destroyed, so you can see the same streets, buildings and synagogues. The problem is there are no Jews. Some people have even said it like a Jewish Disneyland. But Muranów is a real living district, not a shell,” Fikus said.