Out of Africa - in an electric car: The Polish explorer who drove across Africa in search of clean energy

His grandfather was a renowned explorer, prolific writer and author of the film-inspiring book Squadron 303. But after taking 97 days to drive 15,176km across Africa in an electric car, Arkady Fiedler (jnr) is pretty impressive too. The First News went to meet him.

Growing up in the museum set up to honour his famous adventurer grandfather, Arkady Fiedler always knew that a more exciting life beckoned.

Among the artefacts and mementos from the heyday of European exploration, Fiedler was pulled into other exotic worlds that a normal life was unlikely to provide.

It would take a while, though. After leaving the sleepy little town of Puszczykowo, the Marketing and Management grad-cum-explorer worked in London for a decade before returning home to Poland to take up the mantle of his famous namesake.

His first proper trip was a journey across Poland in a Fiat 126, a nostalgic exercise considering everyone in Poland grew up alongside a ‘maluch’ (‘little one’). By this point, Fiedler had been in London for a while, and was looking to reconnect with his homeland.

“I bought a ‘maluch’ and I took it around Poland like I used to with my parents. And I discovered the car all over again. With modern cars, you get in at one point and get out at another, and in between those places, the road is completely unimportant. But in a vehicle like the maluch the road is the most important, because it’s uncomfortable -- you have the windows open, you are closed in. Because you go much more slowly,” he says.

This marrying of his love of cars and adventure saw him go across Asia in the ‘maluch’ in a project titled ‘Along the Way’. This was then followed by another trip through Africa in an effort to test the limits of doing so in a car as feeble as the ‘maluch’. He survived.

A shift in thinking, however, forced him to shift from the Fiat to an electric car and a new adventure called. 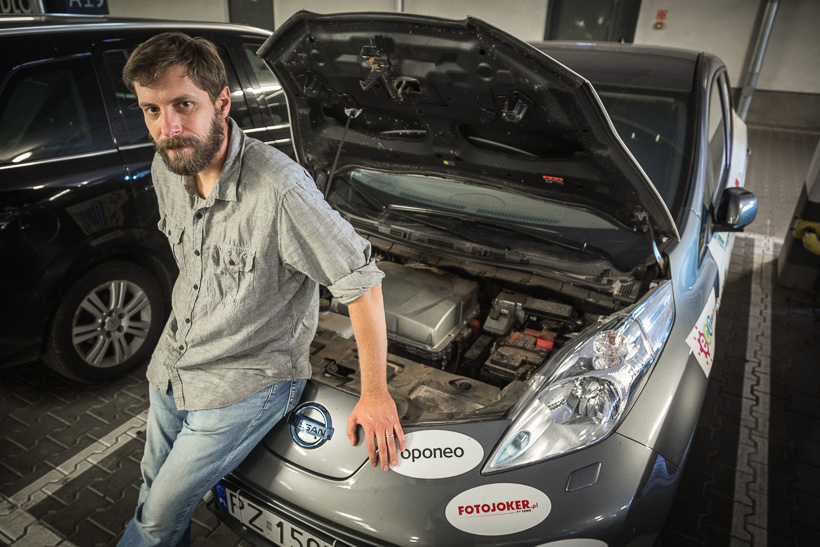 “I became interested in the possibility of clean energy, especially because its development in Poland is constantly coming up against great obstacles, especially in people’s mentality. So I was hoping I could show people that the impossible is possible,” he says.

The 42-year-old returned to Africa this year with a new project -- the Electric Explorer -- which saw him travel the length of Western Africa, crossing 14 countries in an electric car in search of power.

Fiedler found electricity everywhere in Africa, but it wasn't always reliable, with some places supported by power grids and others by generators managed by the local communities. This made for interesting moments.

“Once I was forced to charge from a mobile phone tower in the middle of nowhere. The antennas were powered by a big generator and thankfully the guard managed to break in and charge the car off those generators,” says Fiedler.

The grit required to withstand such uncertainty in a car that had a 200km range was all down to good planning, says Fiedler. Every variable had to be accounted for and his trusty cameraman helped keep the eye on the prize. They were there to work, after all.

Planning, luckily, did not hamper the spontaneity says Fiedler, who plans to go on more trips after he finishes his latest book (though they remain a secret).

“There’s nothing scripted here -- the whole road is in itself the script, at least in my case. I don’t plan for us to going to look at this ‘today’ or do this ‘tomorrow’. The material just appears in front of you. If something interesting happens, you take a photo or film it. And that's it."

Ukrainian grain will not be sold in Poland says PM