One for the album: Israeli and Polish post offices issue special anniversary stamp

The stamp went into circulation in both countries on November 5, and were created, Poczta Polska says, to celebrate both the anniversaries and a long shared history.

In a press release Poczta Polska said the series, entitled ‘Poland-Israel. Independence. Memory. Heritage,’ is “to commemorate both anniversaries this year as well as the centuries-old common history the two nations share.” 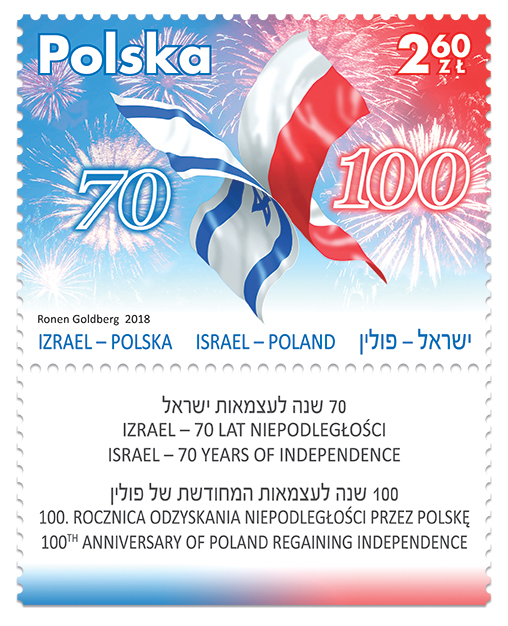 It is the third time the Israeli and Polish post offices have launched a joint-issue stamp.Ronen Goldberg, Marzanna Dąbrowska/Poczta Polska

“It is significant that in the same year Poland and Israel celebrate anniversaries that are important to both nations,” said Przmysław Sypniewski, president of Poczta Polska’s management board.

The stamps were designed Ronen Goldberg, an artist who has created a number of stamp designs for the Israeli post office.

This is the third time the two post offices have launched a joint issue of stamps. Back in 1993 they issued a stamp to mark the 50th anniversary of the Warsaw Ghetto Uprising, and in 2009 a stamp was produced to celebrate the life of Berek Joselewicz, a Jewish-Polish merchant who fought in the Kościuszko Uprising as colonel in the Polish army.

Despite an at-times fraught history between Poles and Jews, Poland and Israel enjoy strong economic and political ties.