Scientists are working on a way to grow plants on Mars, which could also be used to help grow crops here on Earth.

If humans start living on other planets, one of the things they will need is food – ideally grown onsite, without having to “import” it from other planets, which would be impractical and expensive.

One question is how humans could grow crops on Mars, which – unlike the Earth, with its humid soil rich in nutrients and microorganisms that foster vegetation – has an arid surface made of regolith and a surface temperature of around -60℃.

Unlike the Earth, Mars has an arid surface made of regolith and a surface temperature of around -60℃.NASA

Responding to this challenge, Izabela Świca and Hubert Kowalski, two young doctoral researchers at the Faculty of Geoengineering of the University of Warmia and Mazury in Olsztyn, in northeastern Poland, have created a capsule for producing a special organic fertiliser.

Świca said: “We are working on a simulator of Martian soil that comes from Hawaii. Based on the collected data obtained from the exploration of the Red Planet so far, the Americans have created a copy of the rock covering Mars with identical properties. By examining the fertiliser produced, we are experimenting on samples of this simulator in the New Life Capsule.”

The New Life Capsule, which the researchers want to patent, enables them to create specific conditions for observing the development of algal-fungal biomass, which creates a special fertiliser. 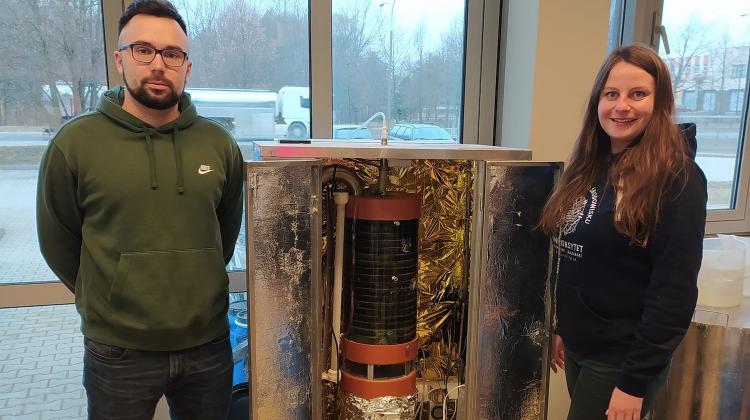 Izabela Świca and Hubert Kowalski at the Faculty of Geoengineering of the University of Warmia and Mazury in Olsztyn came up with the idea in response to the question of how humans could grow crops on Mars.Press materials

In addition to space exploration, the duo’s work could also have practical applications on planet Earth – for example, in deserts or other areas where it is difficult for grow crops.

Świca said: “Our research will enable vegetation to be cultivated and developed in places where this cannot be done today.

“In the face of a growing global population and the still-unresolved problem of hunger, the organic fertilizer that fertilisers the soil offers hope when it comes to improving the living conditions of millions of people.”