A new kindergarten will come with a greatly reduced environmental footprint thanks to the use of green “passive” construction technology.

The “passive” kindergarten will be built in Podkowa Leśna, a town near Warsaw, where it will replace an older kindergarten. A public institution, it will have space for around a hundred pre-schoolers, plus a small nursery for younger children.

The building was designed by Bjerg Architecture, which focuses on day-care centres, primary schools and housing. Founded in 1987, the firm has been working with passive housing buildings for more than a decade now. In addition to Denmark and Norway, it has an office in Poland, where it also has several major projects.

Triple-glazed windows and a positioning to make the most of sunlight will help reduce heating bills.www.bjerg.nu

“Passive houses” use clever design and insulation to create low-energy buildings that require little energy for keeping warm in winter or cool in summer. This is usually achieved through the building’s positioning to make the most of sunlight, strong insulation and triple-glazed windows, and a ventilation system that helps keep heat inside.

In addition to homes, other buildings such as offices and schools have been designed in this way. By using less energy, they are not only more environmentally friendly than traditional houses, but can also save their owners money by offering a much lower heating bill.

The kindergarten will be built around a courtyard with a tree growing inside it, bringing nature almost into the classroom.www.bjerg.nu

The low, two-storey building in Podkowa Leśna will have four classrooms, a larger room and a nursery area. It will be built of prefabricated modular elements, which will speed up construction.

The project will be positioned to maximise on sunlight during the cold winter months, helping provide a warm environment for children to play and learn. As well as providing a natural touch, the wooden façade will play a functional role in the “passive” building, helping regulate its temperature. 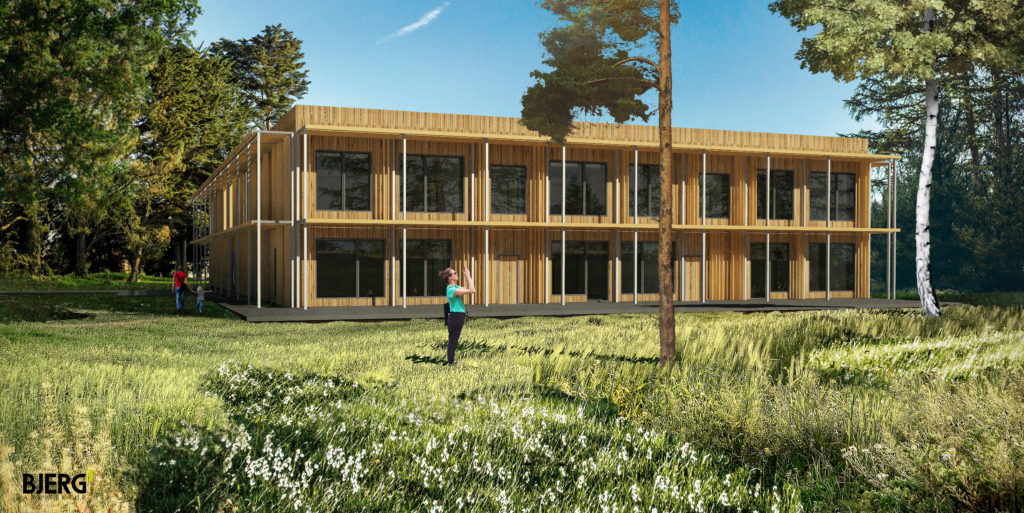 As well as providing a natural touch, the wooden façade will play a functional role in the 'passive' building, helping regulate its temperature.www.bjerg.nu

“The openwork façade, softening the outline of the building with numerous projections, and openwork rhythms from vertical boards, blends the architecture with the natural surroundings, simultaneously regulating insulation and protecting the building from overheating in the summer,” the architects explain on their website.

The kindergarten will be built around a courtyard with a tree growing inside it, bringing nature almost into the classroom.

“This is a symbolic underlining of the ecological values guiding the whole project,” the architects stated.