A new book by the nephew of Alan Turing, the man credited with cracking Nazi Germany’s Enigma code, reveals the essential role of Polish cryptographers.

The Polish mathematicians were the first to decipher German military communications encrypted using Enigma machines before World War II and their work formed the foundation for later code-breaking at Bletchley Park, the famous British cryptology centre, during the war.

In an interview with Polish Radio Sir Dermot Turing said: “The Brits would never have made a step forwards without the Poles. I wanted to describe the story in a way to make it better known, particularly in Britain.

“Poles were six or seven years ahead compared to the Brits” in terms of cracking the code.”

Enigma was a series of cipher machines originally created near the end of the First World War and used commercially and by the military in Germany. Although thought to be unbreakable, top codebreakers and mathematicians Jerzy Różycki, Henryk Zygalski, and Marian Rejewski at the Polish Cipher Bureau in Warsaw set out to do the impossible.

At the time, the British thought the key to cracking German codes was to use linguists. However, the Poles realised that mathematics was the key to determine code patterns. The methods they developed eventually lead to 75% of German Enigma transmissions being deciphered by 1938.

That same year, the Germans made improvements to their Enigma machines that meant the scale of data crunching needed to break the codes was beyond the resources of the Poles, so they looked for outside help.

On July 25, 1939, with the German invasion of Poland looking inevitable, British and French cryptographers met with their Polish counterparts in the their codebreaking HQ in Kabaty forest outside Warsaw. To the utter amazement of the British and French they were handed a reconstructed Enigma machine and other codebreaking devices and materials needed to read German signals.

It is rumoured that a senior MI6 officer meets with Polish intelligence chiefs each year on July 25 in Kabaty forest to commemorate the handover of this bounty.

This priceless know-how gave the Bletchley Park cryptographers the information they needed to break increasingly sophisticated German codes during the war, a capability that is widely believed to have shortened the war by several years. 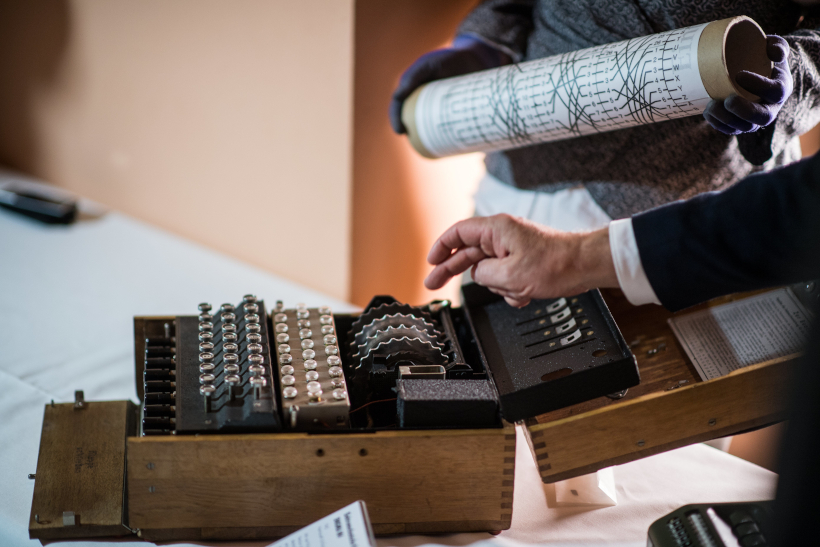 Despite the crucial work of the Poles, their role has largely been ignored outside of Poland. However, this is starting to change. In March this year, the Bletchley Park codebreaking museum extended its permanent exhibition to highlight the work of Rajewski, Różycki and Zygalski.

Also, Sir Dermot Turing, the nephew of Alan Turing, in his book X, Y & Z released this week says that the “cult of Alan Turing” has been taken to absurd extremes and that it has overshadowed Bletchley Park’s debt to the Polish cryptographers.

In an interview in The Times, Sir Dermot, a solicitor and a trustee at Bletchley Park, stated: “Pretty much all Alan Turing’s main breakthroughs were not entirely his own achievement. I am not trying to denigrate him – it is absolutely obvious that his insights were brilliant and groundbreaking – but he had a serious leg-up. All the things associated with his name at Bletchley Park are based on foundation work done by the Poles.”

He goes even further and suggests that the fascination with Alan Turing may have gone too far: “There is a little bit of an Alan Turing cult out there at the minute, for all sorts of reasons which are very understandable and which I don’t particularly disagree with, but it does mean that it can be taken to absurd extremes.”

As an example, he mentions that the University of Surrey in Guildford has a huge bronze statue of Turing, yet Zygalski actually taught at the university after the war and Turing had no connections with Guildford.

Zygalski was prevented from talking about his achievements after the war by the Official Secrets Act; however, he lived comfortably with his English wife Bertha Blofield until his death in 1978. His wartime colleagues fared less well. Jerzy Różycki drowned in 1942 after the ship he was sailing in sunk in the Mediterranean, while Marian Rajewski returned to Poland where he was interrogated by the security services about his activities during the war.

On Saturday a memorial to wartime Polish codebreaker Henryk Zygalski was unveiled in the English town of Chichester.