The settlement’s founders belonged to a group which inhabited current-day southern Scandinavia, Germany and Poland from 4,300 to 2,800 BC.

Archeologists in the city of Sandomierz have made an astonishing discovery - a 5,000-year-old settlement.

Underneath a layer of medieval relics, the archaeologists examining Wzgórze Staromiejskie (Old town Hill) found traces of a much older community, belonging to the so-called Funnelbeaker culture.

While named after the characteristic ceramics with funnel-shaped tops, they are best known for erecting enormous megalithic tombs, the ‘Polish pyramids’.

“It was a surprise to find the remnants of a settlement dating back over 5 thousand years. They were located under the relics from the Middle Ages”, the archaeologist Monika Bajka told PAP.

In her opinion, this discovery is significant, since these are the only traces of this region being inhabited by the Funnelbeaker culture’s representatives.

More importantly, they are a group native to Poland, which developed in this area.

New information about the past of the Wzgórze Staromiejskie was uncovered thanks to the excavations held in April.

“We managed to examine several caves, where grain and other things were kept,” Bajka revealed.  Inside, the archaeologists found fragments of broken ceramic jars decorated with ornaments made with stamps, used for storing liquids and herbs. Other findings included a grinding stone, stone tools and mussel shells, indicating that the inhabitants ate them, when they were short of food.

Until now, the archaeologist working in Sandomierz, a picturesque town in south-eastern Poland have found traces of human activity from various periods, especially Middle Ages. Advantageously located on the banks of Vistula, Sandomierz has been an important political and cultural centre. As it turns out since Neolithic times. “All the discoveries until now indicated that the hill was intensively used by humans for thousands of years,” said Bajka. 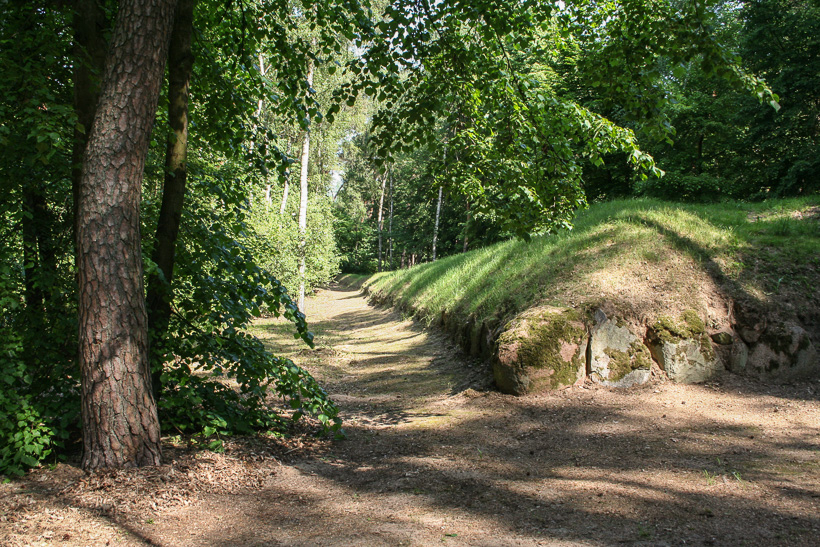 Megalithic tomb from Stonehenge times,  located in the north of Poland.
(Wikipedia)

The settlement’s founders belonged to a group which inhabited current-day southern Scandinavia, Germany and Poland from 4,300 to 2,800 BC. The most spectacular signs of their existence are the megalithic tombs found in the Kujawy region (in the north of Poland).

Aptly named the ‘Polish pyramids’, though they are older than their Egyptian namesakes.

The tombs, some even 130-metres-long, have the form of an elongated trapezium. Built from massive stones, they were used for burials and religious rites. Men, surrounded by weapons, ceramics and tools were laid to rest standing. A curious exception is one of the tombs in Sarnów and Wietrzychowice, were only one woman was buried.

The research carried out can reveal new information on the early inhabitation of the area around the river Vistula. It’s by pure chance, that the discovery in Sandomierz happened this year, as a house was supposed to be built on Wzgórze Staromiejskie.

“Our work was not focused on solving some research problem. It makes us even more pleased, that we managed to procure some new data on the past of this part of the city”, concludes Bajka.

Caveman bling! Pendant made of mammoth bone with ‘mysterious dots’ could be oldest known example of ornate jewellery in Eurasia