The musical extravaganza, entitled “Towards a New World,” was organised by Sinfonia Varsovia Orchestra and held in the Great Theatre—National Opera.

“We dealt with forced emigration mostly in 19th and 20th centuries,” he continued. “The composers’ flights from their home countries was often motivated by tragic political events.”

Examples of composers having to pack their bags for political reasons are common. Sergei Prokofiev fled Russia in 1918, following Igor Stravinsky who had left in 1914. During the festival the audience had the chance to hear Prokofiev’s Symphony No. 3 in C minor, Op. 44, and Stravinsky’s Suite No. 2 for chamber orchestra. 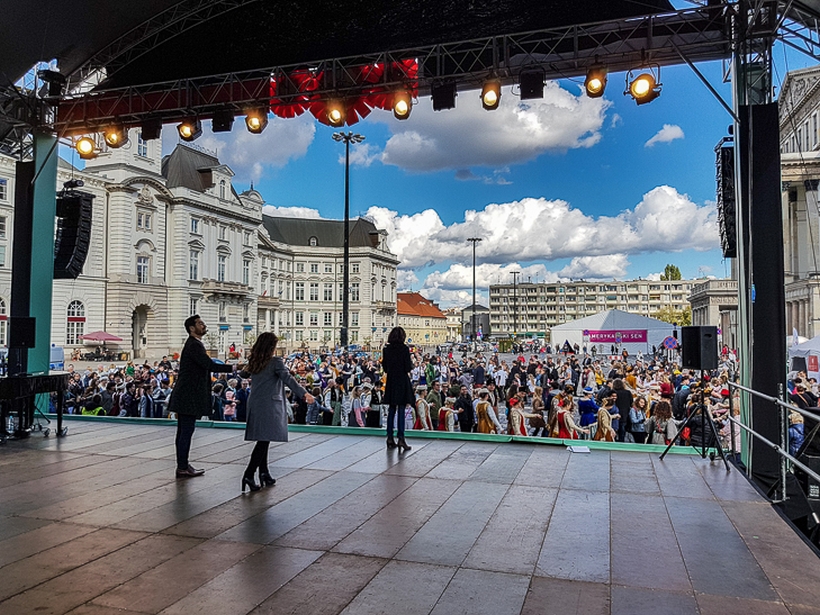 With emigration a central theme the festival featured the work of composers who had to flee their homelands. Kalbar/TFN

The music enthusiasts also got a full spectrum of modern and classical music. The classics, played among others by the Sinfonia Varsovia and the National Opera’s Orchestra included pieces by Frederic Chopin, Ignacy Jan Paderewski, Karol Szymanowski, Franz Schubert, Sergei Rachmaninov and other great composers.

Jazz fans had the chance to see, among others, the Marcin Masecki Trio and the Adam Bałdych Quartet. Two screening of Charlie Chaplin’s “The Immigrant” was accompanied by live piano music performed by Paul Lay.

An integral part of the festival was the first Warsaw Polonaise for Independence contest winners. The compositions by Emil Wojtacki (1st prize), Paweł Siek (2nd prize) and Ireneusz Boczek (3rd prize) were played for the first time by the Sinfonia Varsovia. A procession of dancers, professional and amateur, as well as the public also got the chance to dance to the compositions in the streets of Warsaw’s Old Town.

The theme of patriotism and attachment to one’s country was strong throughout the crazy days owing to Poland celebrating its 100th anniversary of regaining independence.