Already the subject of many column inches, Warsaw’s vegan scene is back in the media spotlight after it was declared the sixth most vegan-friendly city in the world in the latest global rankings to be released by HappyCow, the planet’s most comprehensive guide to the plant-based lifestyle.

Rising from seventh position last year, according to the most recent findings only London, New York, Berlin, LA and Toronto can better the Polish capital.

“In October of 2014 we noticed many vegan restaurants in Warsaw were being added by users of HappyCow,” says Ken Spector, a Principal of the American-based vegan portal. “As such, we decided to extend our European tour to Poland to investigate what was really happening in Warsaw.” 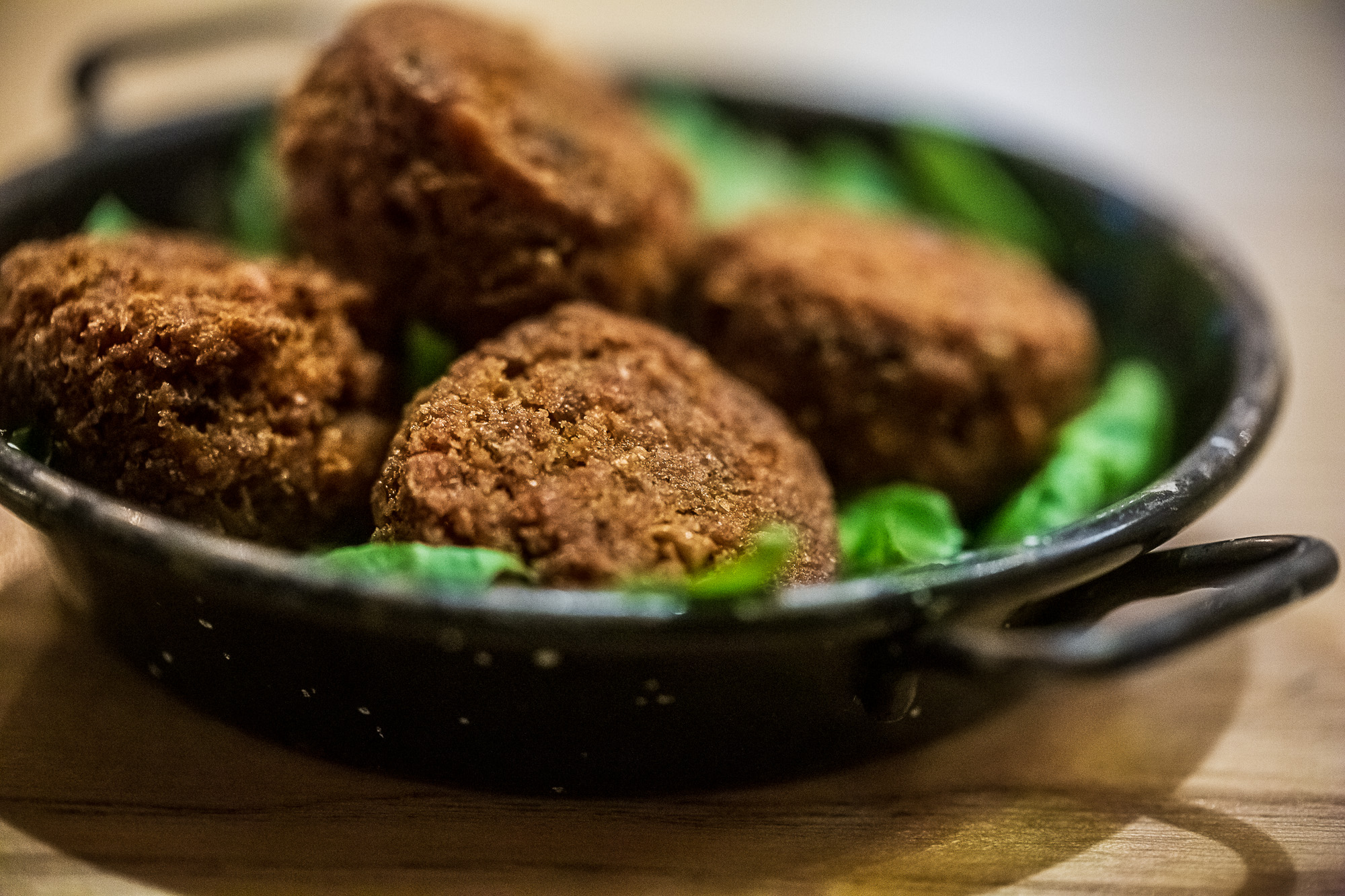 Spector says that Tel Aviv has some of the “best falafel” he’s ever had. Kalbar/TFN

The resulting fact-finding odyssey – conducted in May of the following year – was deemed an instant success.

“I had heard before my trip that Poland was no place for a vegan to go, that it was a very meat-centric culture,” recalls Spector. “Furthermore, the Polish people I contacted beforehand warned me that as someone that had travelled extensively I probably wouldn’t think much of the food there – my expectations were set very low.”

Immediately, the city nullified all prior assumptions. “Some of the best falafel I’ve ever eaten was at Tel Aviv Urban Food and Falafel Beirut, and I still remember the first bite of Krowarzywa’s famous, award-winning burger.”

This, though, was just the beginning. 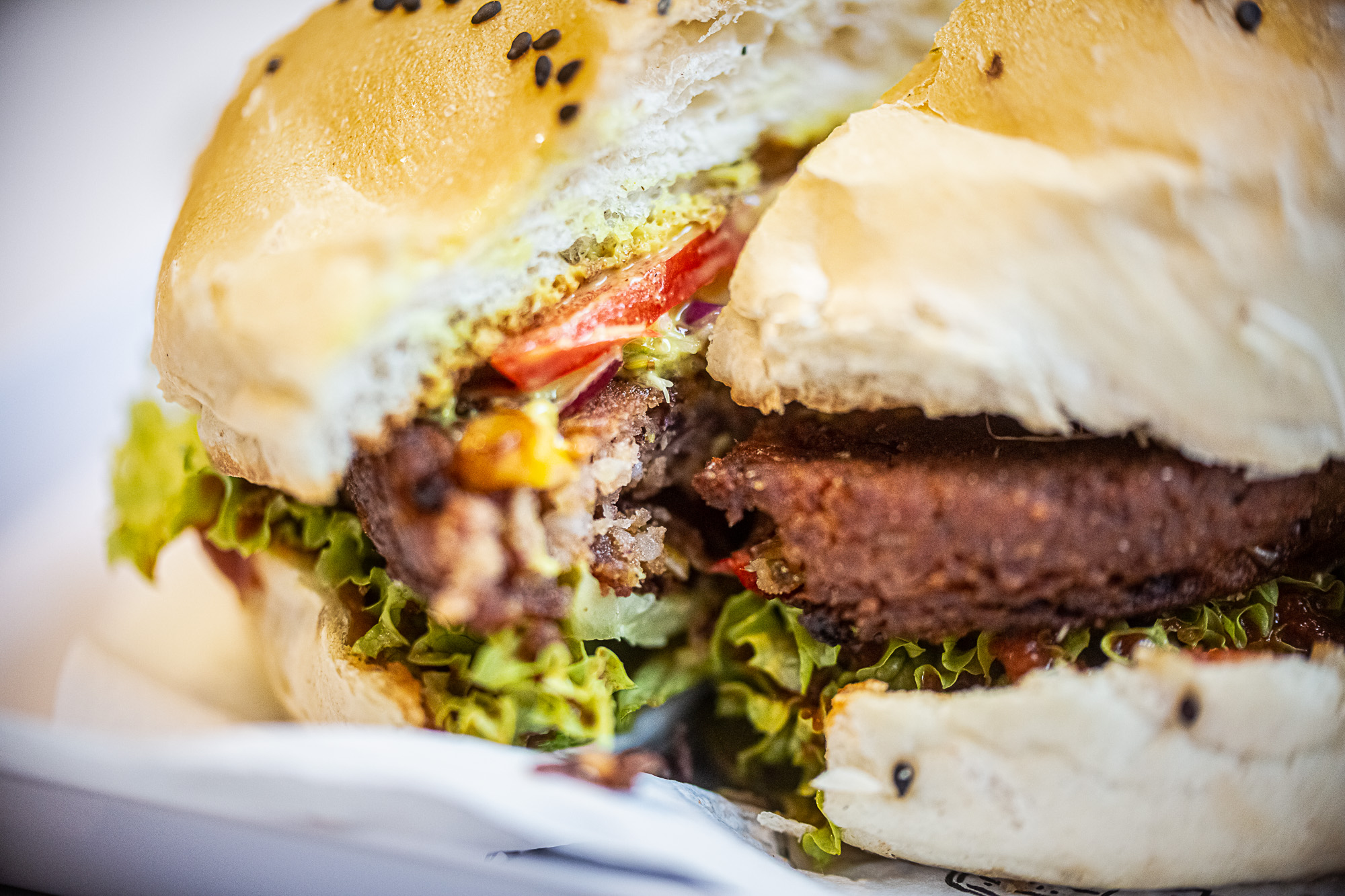 “We’ve reached people who aren’t vegan, and shown them that plant-based food can also be tasty, filling, wholesome and interesting,” says Krowarzywa’s Suski.Kalbar/TFN

“In those days there were just 20 vegan restaurants,” remembers Spector, “now there’s 53 with an additional 45 restaurants classified as vegetarian; furthermore, in just the space of one or two years between visits we were struck with how much more diverse the scene had become.”

It wasn’t just diversifying, but densifying as well.

Cited in this year’s report for the number of restaurants found within a one-kilometre radius, that so many eateries find themselves within a stone’s throw of each other has become one of the defining factors of Warsaw’s crowded vegan sector. 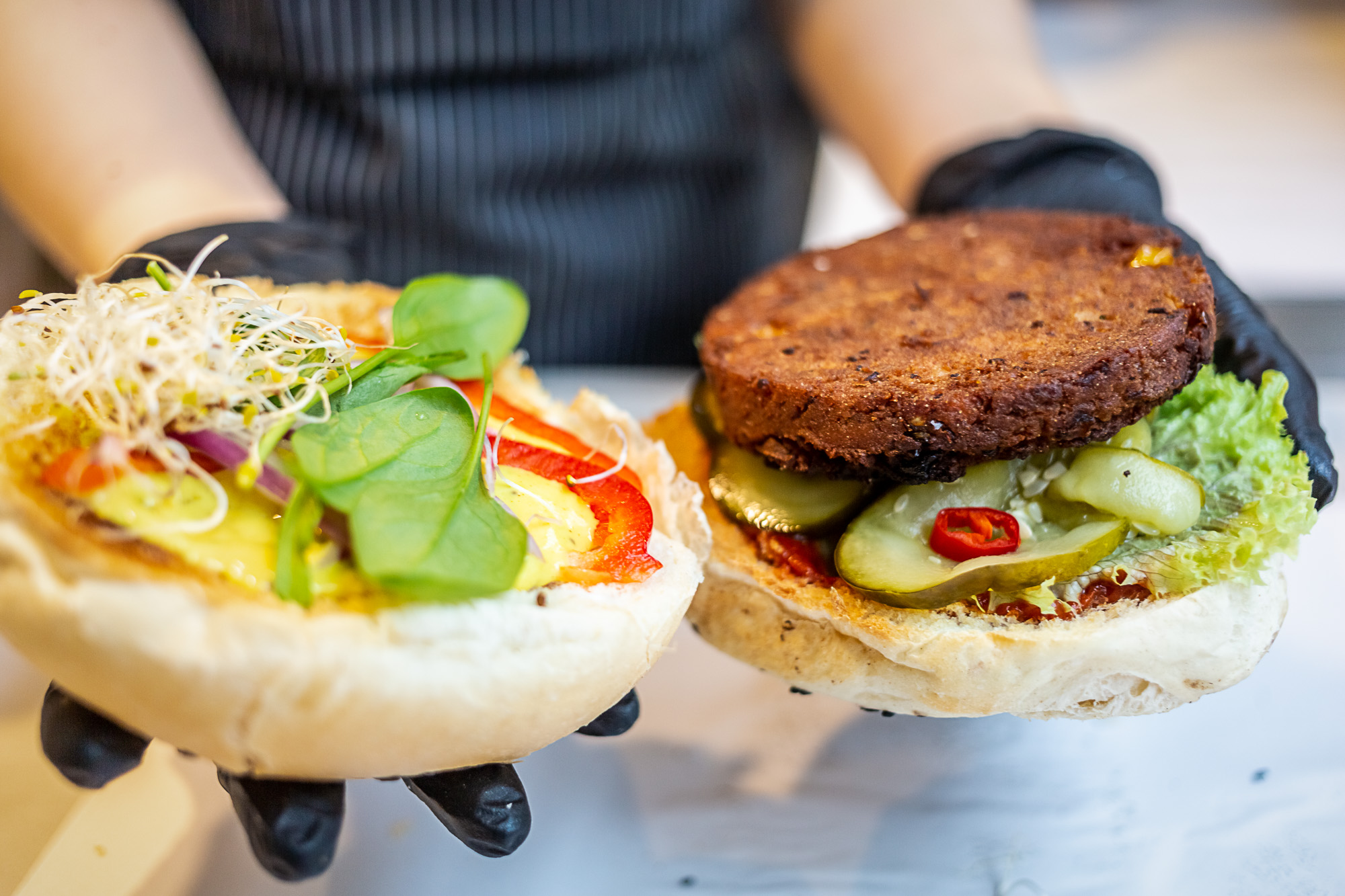 “It’s an unforgettable feeling to see such a small area of the city with such a wide variety of high-quality vegan restaurants,” says Spector, “and when you top that off with vegan bakeries, grocery stores and even shoe stores and nail salons you’re left looking at a vegan paradise!”

Playing a lead role in this growth have been Krowarzywa, a burger venture seen by many as an icebreaking pioneer.

“We’re proud to be a part of the vegan community, especially given that we were one of the first on the map,” says Krowarzywa’s franchise manager, Marcin Suski. “When we opened vegans were undervalued and vegan products were scarce, but since then vegan culture has entered the mainstream of Warsaw and is quickly spreading to other cities in Poland – it’s a dynamic movement and we feel we have a lot to say in all of those places in which this lifestyle is developing.” 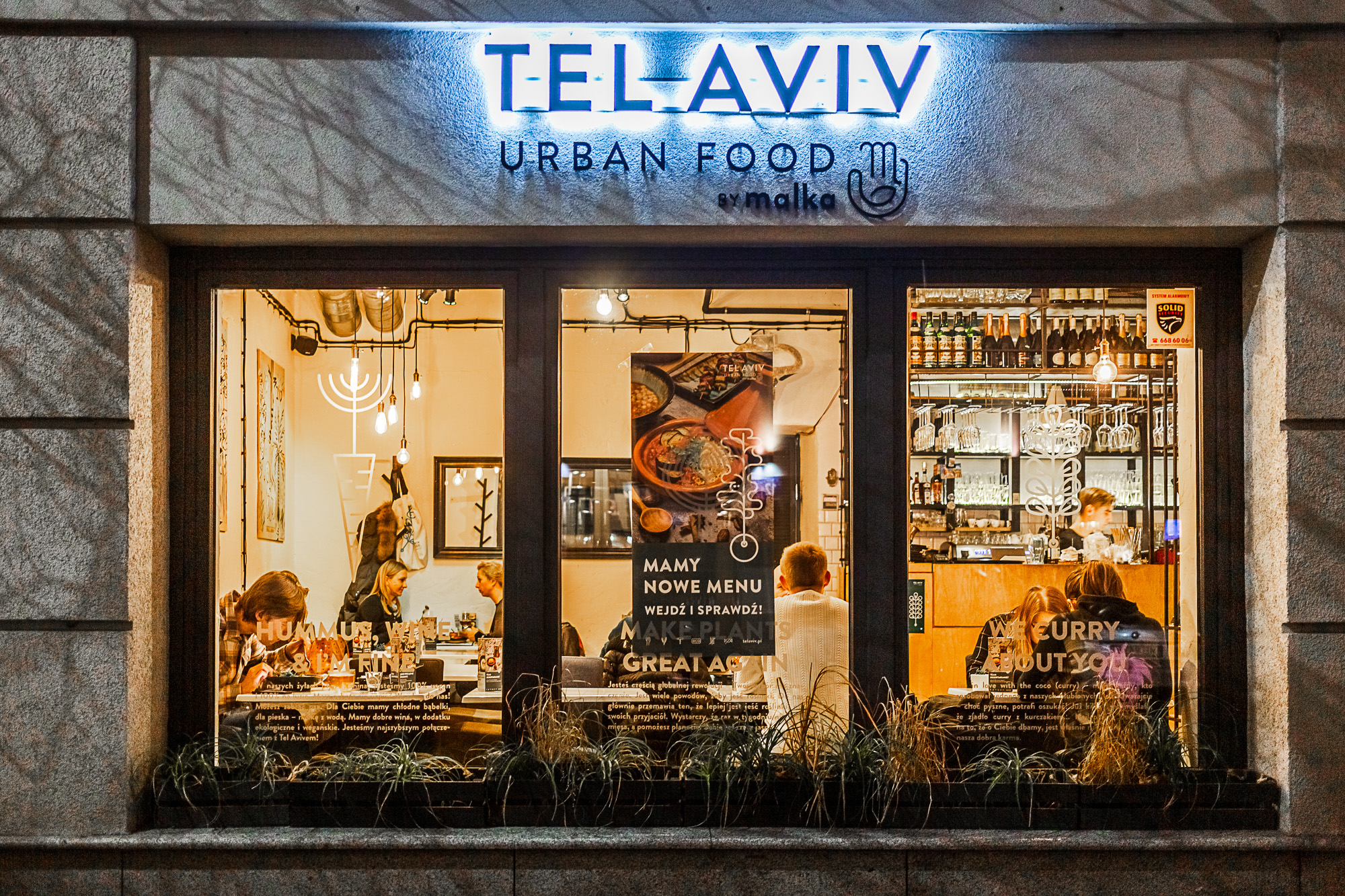 Tel Aviv’s location on Poznańska Street in the capital’s south central district – has emerged as the dynamic hub for all things vegan.Kalbar/TFN

By Suski’s own admission, competition has become stiff, yet Krowarzywa’s ideals have helped keep them ahead of the pack. “We’ve simply remained true to everything we do,” he says, “and our clients appreciate that. We’ve also reached people who aren’t vegan, and shown them that plant-based food can also be tasty, filling, wholesome and interesting. Whether or not that’s the secret of our success I couldn’t say, we just carry on doing what we think is right.”

Of this early wave of visionary boundary pushers, few emerge with as much credit as Malka Kafka of Tel Aviv Urban Food. Inspired by what she had seen on her European travels (“vegan restaurants with the mentality of modern bistros,” she says), the 2010 opening of her eatery ripped up the formbook, demonstrating that vegan food wasn’t just some fad for students and yoga nuts, rather something cool, something good, something fun. And above all, something delicious. 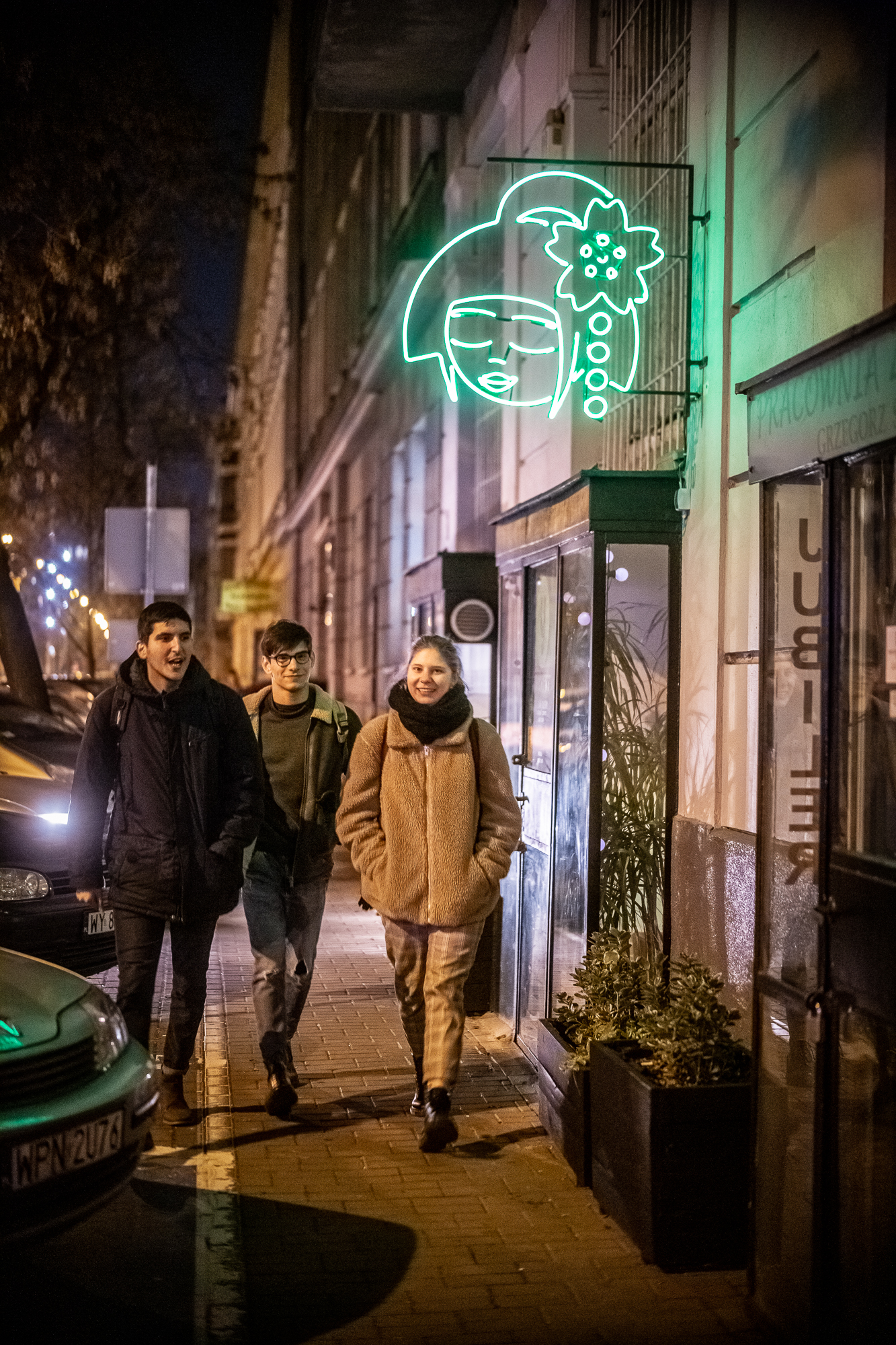 Youmiko have caught the spirit of the time, attracting round-the-clock crowds. Kalbar/TFN

The buzz that came with its success was palpable and continues to this day. Evoking the raw urban energy of downtown Tel Aviv, Kafka’s concept has since been successfully rolled out in franchises across Poland and ambitions for international expansion are by no means far-fetched.

Despite that, Tel Aviv Urban Food’s original address remains a mothership and spiritual anchor, not just for Kafka’s own project, but for the vegan segment in general. Whether by accident or design, the location she chose – Poznańska Street in the capital’s south central district – has emerged as the dynamic hub for all things vegan.

Just yards separate it from an acclaimed vegan pizzeria; across the road, a vegan burrito stop that, despite its low budget look, can level with the best Warsaw has. But there is more. An ethnic eatery staffed by refugees around the corner; burgers from Krowarzywa; a vegan dessert stop in the shape of Lola De La Krem; and, of course, the artfully elaborate offerings of Youmiko Vegan Sushi. 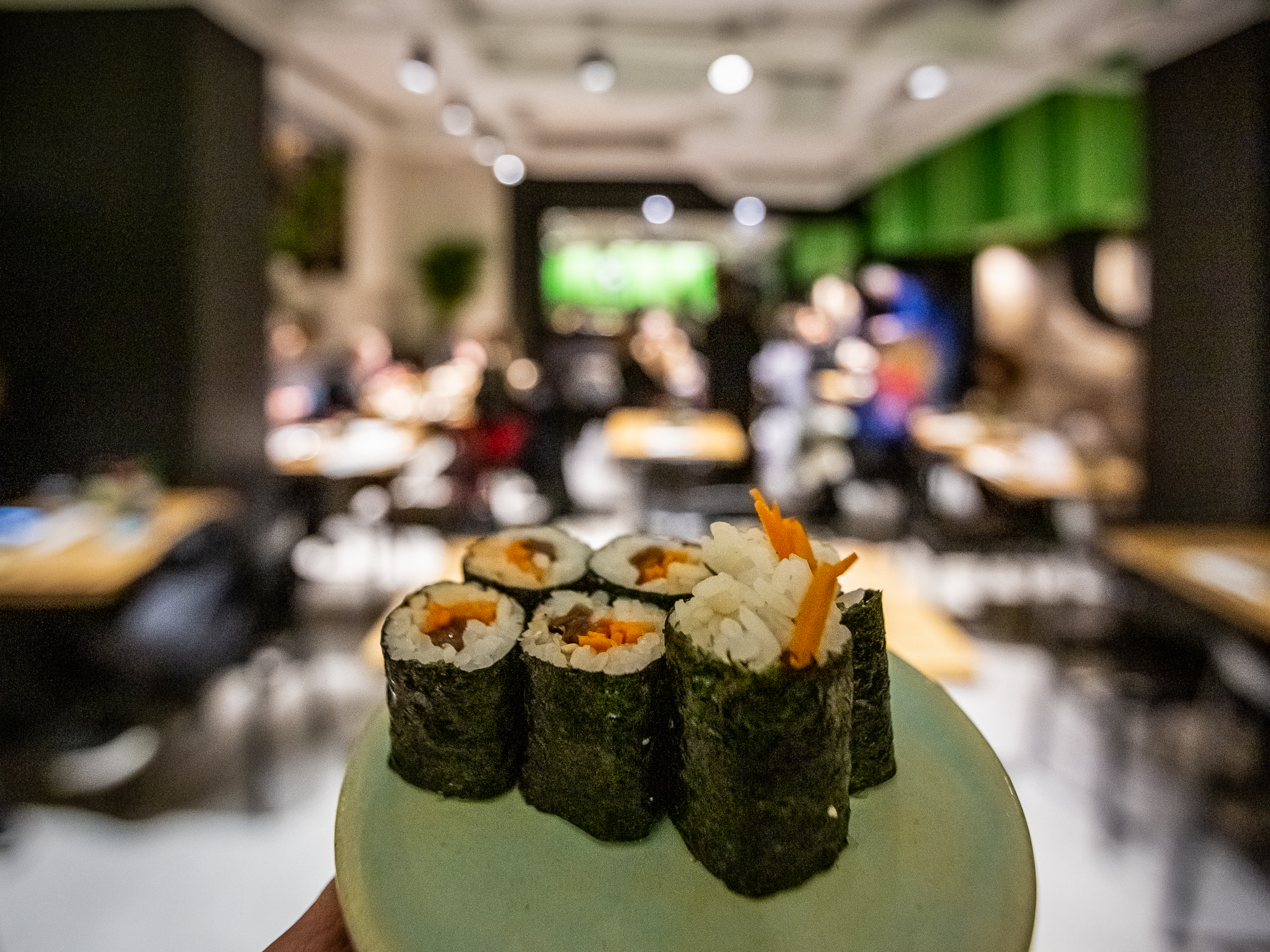 “We’re more open to wacky ideas, more experimental, and I think that shows – looking at all the other vegan businesses that are doing well around us, I’m so proud to be part of it,” says Juda. Kalbar/TFN

“I was vegetarian and loved sushi,” explains Magdalena Juda, owner of Youmiko, “but I was bored with the cucumber and avocado options being offered on menus. My friend Paweł Gnatowski – who created Youmiko’s menu – started making the most amazing, mind-blowing vegan sushi and from there the idea to open a restaurant grew.

“When we decided to take the plunge and launch Youmiko Vegan Sushi we were 100-percent certain that Warsaw was ready for it, and so it proved.”

Described by the Warsaw Insider magazine as being “better than the real thing”, Youmiko have caught the spirit of the time, attracting round-the-clock crowds that cover all income brackets and backgrounds – that Japanese expats are often present and happily clicking chopsticks says much: just by being there, you know you’re somewhere special. 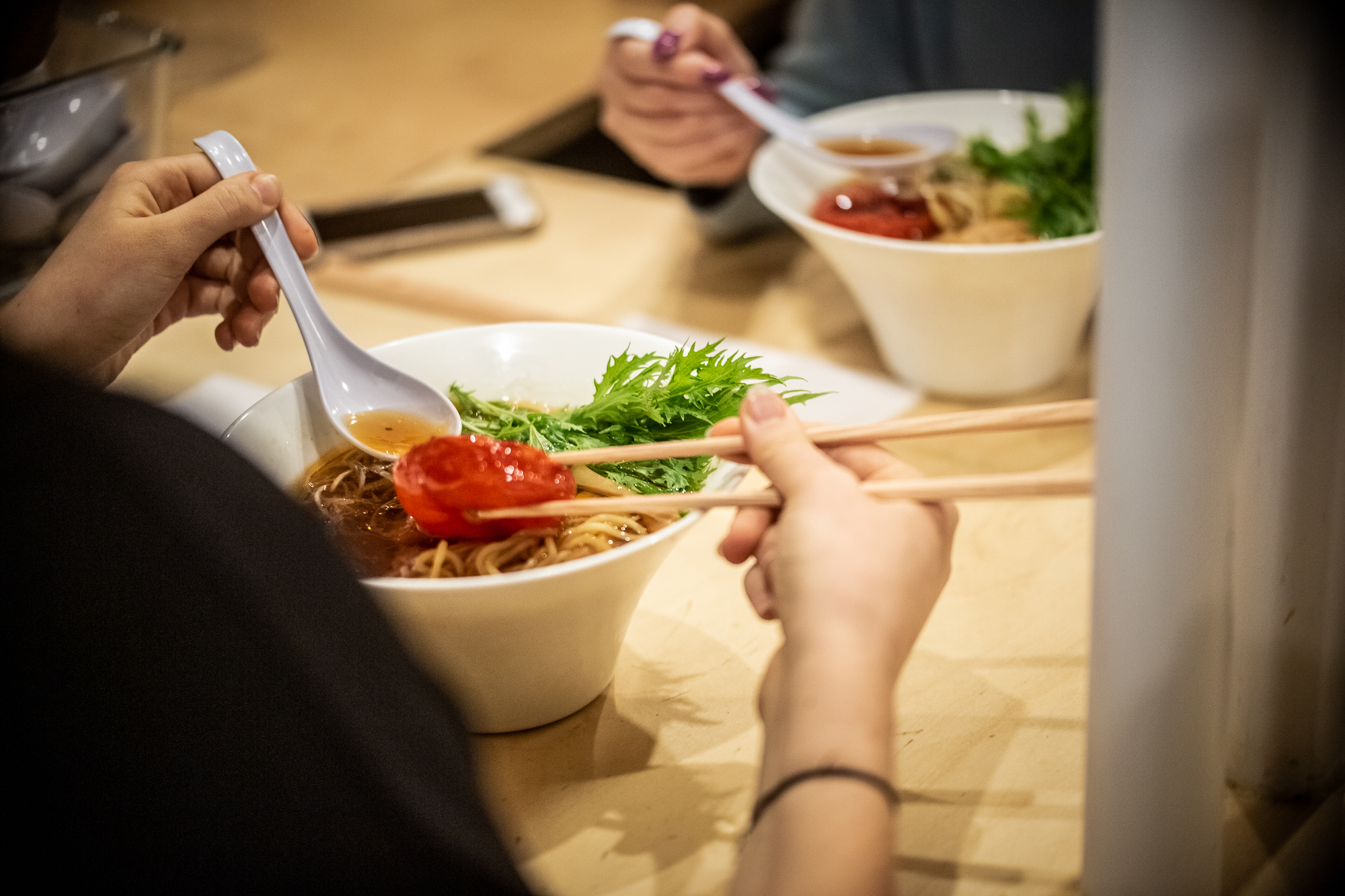 “Honestly speaking,” says Juda, “I’ve no idea how to explain the vegan trend, but obviously I love it! Definitely, something that’s helping it is the amount of young people involved in it. We’re more open to wacky ideas, more experimental, and I think that shows – looking at all the other vegan businesses that are doing well around us, I’m so proud to be part of it.”

But whilst it is this swathe of Warsaw that represents Poland’s vegan frontline, the suburbs, too, have proven fertile in the development of the scene. Labelled by HappyCow as “world class”, Vegan Ramen Shop, with out-of-centre locations in Mokotów and Saska Kępa, have become more than just a niche neighbourhood hero. 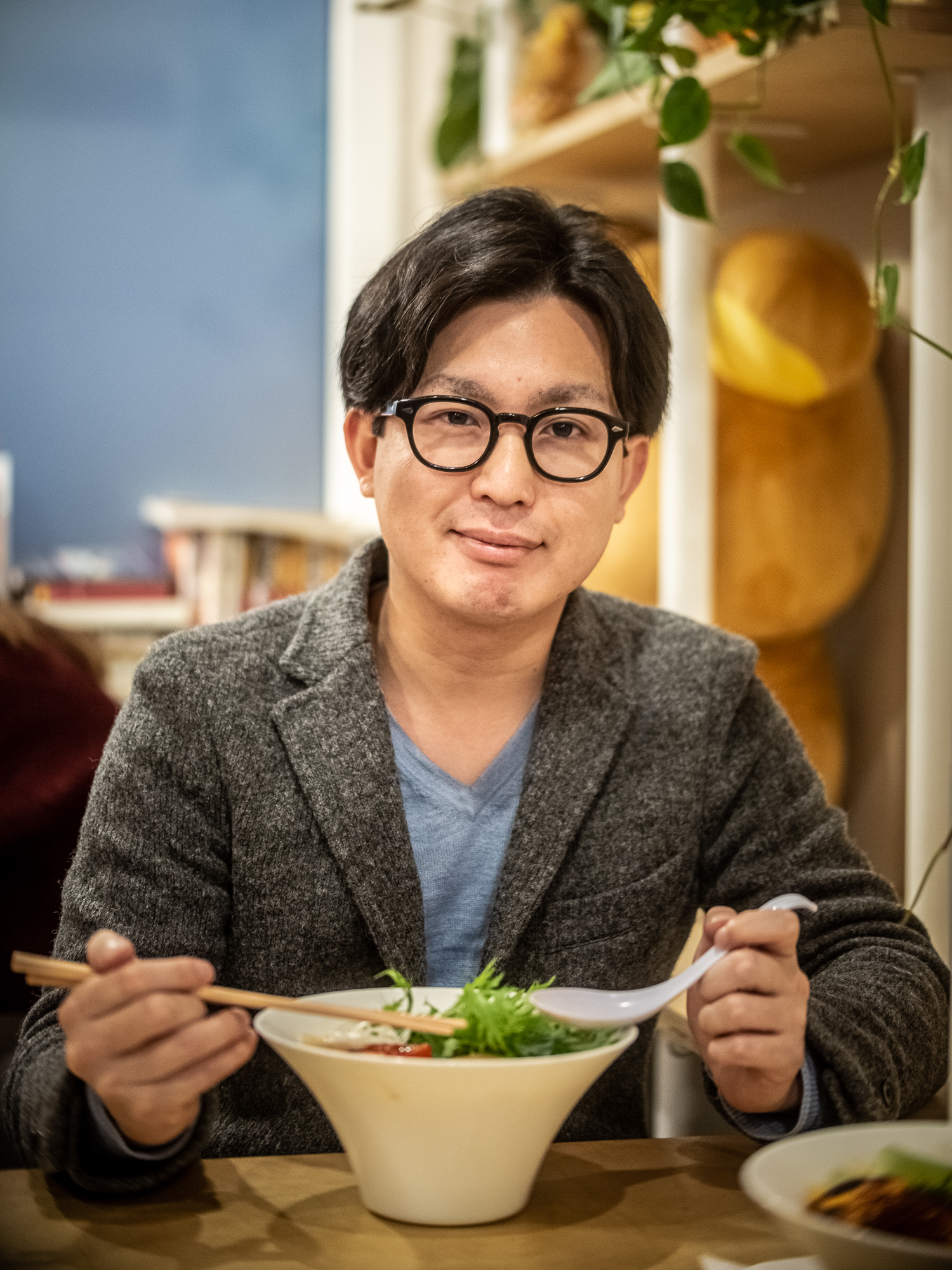 “I would never say it myself,” says Mają Święcicka, co-owner of Vegan Ramen Shop, “but we’ve had many customers who have told us they’ve not had ramen like ours before – even in Tokyo.

“At the same time, that’s not an accident. We’ve been involved on the market for nearly three years,” she continues, “but prior to that we did a ton of research by going to the top ramen hideouts in Europe and Asia and then trying to ‘veganize’ the best tastes we found on our travels.” 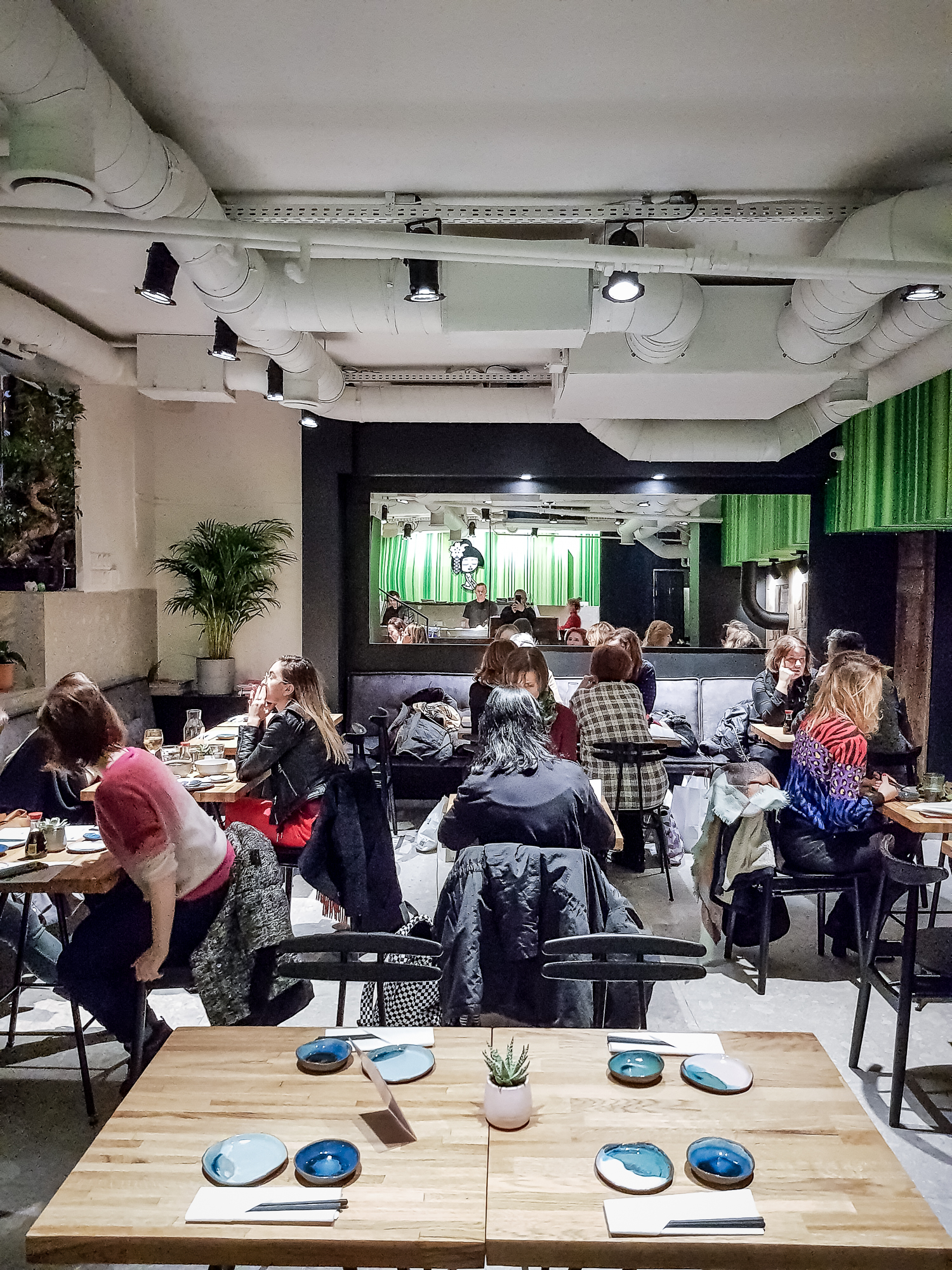 That there are so many eateries within a stone’s throw of each other has become one of the defining factors of Warsaw’s crowded vegan sector. Kalbar/TFN

The strategy has paid dividends, with Vegan Ramen Shop representative of all that is glorious about the city’s vegan scene.

-
"Warsaw one of the best places in the world for vegan food": https://www.thefirstnews.com/article/warsaw-one-of-the-best-places-in-the-world-for-vegan-food