In May this year, the female duo of author Olga Tokarczuk and translator Jennifer Croft were named as the winners of the Man Booker International Prize for Flights, a book described by the New York Times as a  "philosophical rumination on modern-day travel."

After studying Russian literature, Jennifer Croft began an MFA in literary translation and Polish, winning a Fulbright grant to study in both Warsaw and Kraków. It was during this period that she first encountered Olga Tokarczuk’s writings.

The First News (TFN): How did you come across Olga Tokarczuk's books?

Jennifer Croft (JC): I found Olga’s collection of short stories, Playing Many Drums, at the university library as I prepared for my Fulbright year. I had just translated Hanna Krall’s So You Are Daniel and was eager to find more brilliant woman to work with. I found Olga, and I was blown away.

(TFN): What was it about “Flights” that made you want to translate it into English?

(JC): I had never come across such an ambitious and accessible book before. Olga’s prose is so beautiful, and so delicate and shows so much consideration for the reader, while the subjects she takes on—and the structural ways in which she addresses them—are difficult to think of and even harder to broach. I loved the so-called (the term is Olga’s) “constellation” arrangement of the fragments of Flights, and I loved the characters—including the places—described.

(TFN): Translating can be a very difficult task. In Tokarczuk’s case the problem was with the original title, Bieguni, which isn’t a common word in Polish. Could you describe the process that led you to changing Bieguni to Flights?

(JC): I’ve spoken about this a lot, but firstly, the titles of things are often changed in translation, whether by the translator or by the editor. To take a recent Polish example, there is Wioletta Grzegorzewska’s Guguly, which was published in English as Wioletta Greg’s Swallowing Mercury. In the case of Bieguni, the translation proposed early on (by someone else) was Runners. I found the proposal unsatisfying because “runners” in English is so banal, evokes merely joggers, whereas “bieguni” rapidly connotes for a Polish reader while remaining somewhat mysterious. It refers to an Orthodox sect that believed you had to stay in constant motion in order to escape the devil.

One thing that I love about Olga’s work is the networks she manages to build around associations through words’ shared roots. She often speaks of her writing in sewing terms, but I think the organic metaphor of a tree is also apt. I wanted a title that could perform that function, that could appear throughout but in a new light in each place. “Flights” means taking a plane, but also fleeing, flights of fancy and so much more. 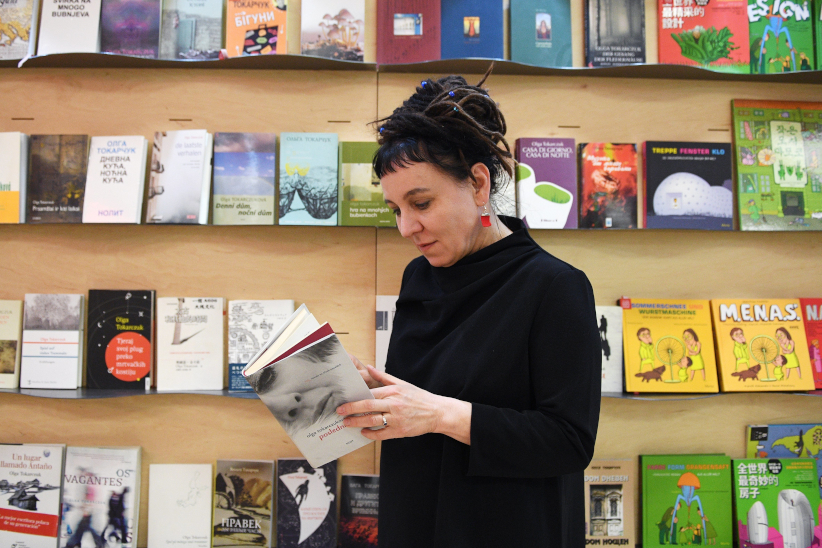 (TFN): You know Olga Tokarczuk personally so did you ever ask her for some explanation while translating her novel?

(JC): Olga has many translators into many languages and is always available to answer questions while also not interfering or micromanaging—no doubt partly because she has better things to do, partly because she trusts us. I personally am always happy if she reads my drafts, but I don’t absolutely require it. The translation is a co-creation, and I think we both understand that it will contain elements of me just as it contains elements of her.

(TFN): Right now you are translating another Olga Tokarczuk’s novel, called Books of Jacob. It is an epic, monumental novel. How is the translation going? Is it harder or easier compare to “Flights”?

(JC): I’ll withhold comment on that for now, other than to say I have an incredible fellowship this year at the Cullman Center at the New York Public Library to find eighteenth-century models from all different regions and classes and faiths that is helping me to write my translation, which will be out with Fitzcarraldo Editions in 2020.

(TFN): You do translations not only from Polish, but also from Ukrainian and Argentine Spanish. What is the major difference between translating from Slavic and Romance languages?

(JC): I think the most important differences are personal, rather than linguistic. Each author I translate requires learning a new language, in a way. I have to get to know them, their quirks, the phrases they turn to most often, their limitations.

(TFN): A last and more general question about translating. What qualities must a good translator have?

(JC): Great translators are great readers and great writers, perhaps the latter above all.

When Swirski met Lem: Scholar Peter Swirski talks to TFN about one of the world’s greatest sci-fi writers, the late Stanisław Lem