Visitors to Warsaw have a chance to delve into the world of Maurycy Gomulicki, one of Poland’s most multi-talented visual artists, and explore the fruits of his labour and his 11-year-long journey into cultural anthropology.

Throughout history artists have long used the body to show off their talents, and for Gomulicki it is the talents of tattooists that have captivated him, and led him to take photographs of hundreds of inked people.

Anybody entering his exhibition at Warsaw’s Zachęta gallery is confronted with walls of these pictures. Large colour photographs, they show old men, some emaciated and some overweight. All of them look as if they come from society’s margins, and all of them sport decades-old and fading tattoos.

“Some of them belong to sailors, some of them were done during their obligatory military service” Gomulicki told The First News. “Still, most of them belong to people who have flirted with crime, or who have a full-time criminal background. But I wasn’t focusing on the prison culture. I was mostly interested in the rudimentary icon [the tattoo].

“What is exciting for me about those tattoos, and more, what is truly touching, is that they form the very basic alphabet of human emotions,” he continued. “They are about the pride a male has in his strength, revenge, but also a longing for freedom, hope and love.”

An exhibition on tattoos will come as no surprise to those who know Gomulicki’s work. 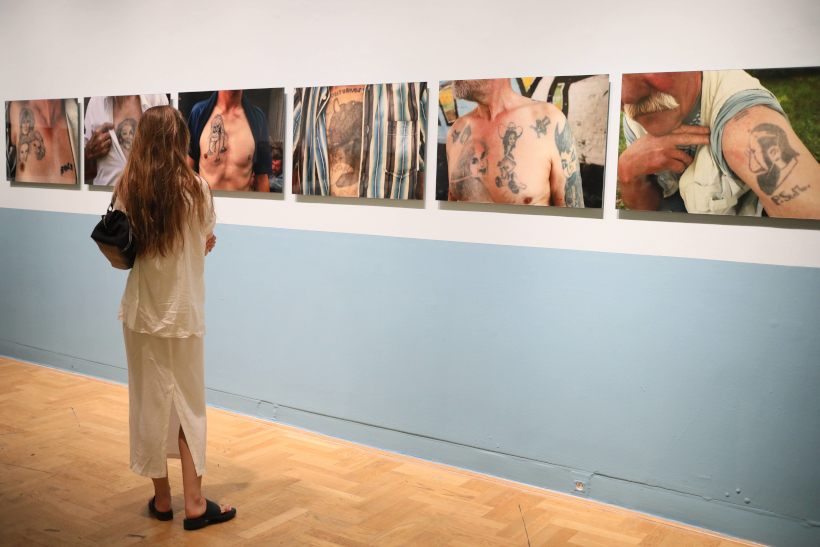 A visitor at Warsaw’s Zachęta gallery takes in a few of the pictures taken by Gomulicki of old and fading tattoos.Leszek Szymański/PAP

Born in Warsaw in 1969 and educated first at the Academy of Fine Arts in Warsaw, and later at the Universitat de Barcelona, Nuova Accademia di Belle Arti in Milan and Centro Multimedia del Centro Nacional de las Artes in Mexico City, he has embraced a whole range of artistic expression from photography and illustration to sculpture, while also penning articles about art and anything else that seizes his interest.

He also developed a keen interest in pop-culture anthropology, and it was from this that the idea of photographing tattoos and exploring their meanings.

“The project took 11 years,” he says. “The zone of my exploration was Poland. I also took some pictures in Ukraine, Belarus and Bulgaria, but for most of this project, I was focusing on Poland. And here you can see tattoos mostly in the summer. The rest of the time they are hidden under the clothes. So, during the year I have only three months when suddenly the objects of my interest becomes visible.”

Gomulicki is quick to stress that the tattoos in his pictures should not be dismissed as cheap and superficial images that have little in the way of meaning. To him they can represent their owners’ aspirations and deep desires.

“Women, actually, are the predominant motif in the tattoos,” he explains. “Those female figures are sometimes personalized, sometimes it is an actual person, with a name – a wife, or a lover. Sometimes they are pop culture idols, actresses, singers. And sometimes it is just a female figure. But, in any of those cases, those women, they don't personalise only highly sexualised beauty. They personalise paradise.”