As NASA continues to explore Mars, a Polish university team has won an international competition to build a rover that can take on the terrain of the Martian planet.

Impuls from the Kielce University of Technology beat off a strong challenge from other universities to win first place at the fourth European Rover Challenge, held in Starachowice, a town in south-central Poland from September 14-16.

The competition aims to become a benchmark for planetary robotic activities, while helping a new generation of space enthusiasts in their careers.

As the winner, Impuls will participate in the AMADEE-2020 analogue mission organised by the Austrian Space Forum in the Arabian Peninsula in 2020. Its rover will take part in terrain missions simulating those on Mars.

“The fact that Kielce University of Technology, which came second in the previous edition, turned out to be unbeatable this year, is the best example of what ERC is all about – paraphrasing Neil Armstrong’s words – a giant leap for a space career,” said Łukasz Wilczyński, president of the European Space Foundation.

Kielce’s victory comes at a time when Poland is looking to space, with a draft National Space Programme presented last year set to provide investment for “priority projects related to the development of national satellite systems”. For this, Poland needs specialised staff, as Jarosław Gowin, a deputy prime minister, noted when opening the competition. 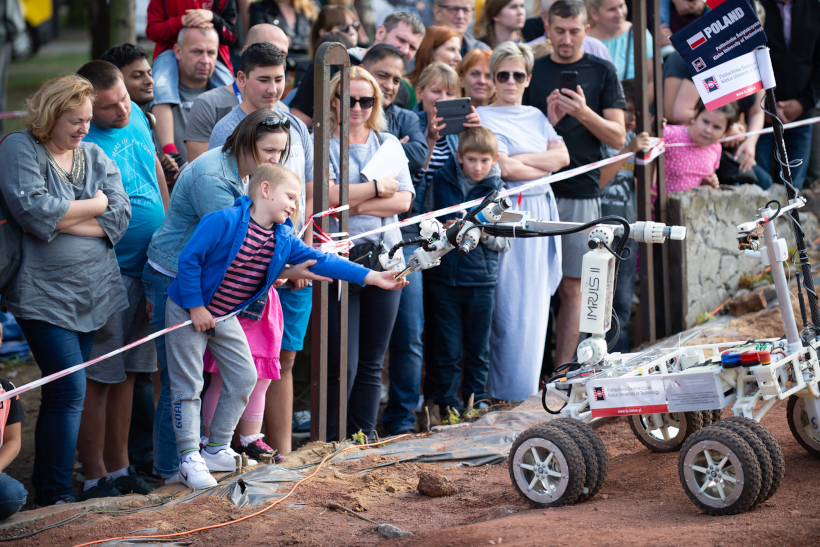 Impuls interacts the crowd, but the rover also had get to grips with a simulated Martian environment.Kielce University of Technology

“I am convinced that for the young people who built these rovers, the competition in Starachowice will be a great step towards their career and one of the next steps towards the development of a dynamic Polish economy,” he said.

This year, 35 teams from universities in 20 countries, from Bangladesh to Peru, took part in the competition, which took place under the honorary patronage of the European Space Agency, among other institutions.

Each built a Mars rover based on real models – the Curiosity Rover or the ExoMars Rover. The rovers were assessed in five competitions, spanning science, maintenance, collection and traverse field tasks, along with a presentation. These included taking a soil sample and completing a difficult route in the Mars Yard, watched over by the jury of 13 engineers and planetary geologists.

The Kielce team was joined on the podium by the Raptors, from Łódź University of Technology, and a Canadian team called Robotics for Space Exploration from the University of Toronto. RoverOva, from the Technical University of Ostrava in the Czech Republic, received the jury’s award.

In addition to the event itself, the competition offers participants an entrance route into the space exploration and robotics community in Poland and beyond, while developing valuable skills, the organisers highlight.