Marcin Maciejowski is an avid collector of images, which he cuts from newspapers, journals and the media in general. These cuttings become the inspirations for his paintings. His subject matter is based on images which he finds either interesting, in an often superficial way, or source material which humours him.

One of his main interests is the depiction of the everyday, the portrayal of ordinary people and their activities, as seen through the eyes of the media. He uses his graphic design background to strip back the source material, which as media sourced imagery has already undergone a selection and editing process, to the simplest and most important elements. He also regularly adds text to the paintings, in order to develop the context of the work.

In The young don’t want to learn or work (2000), he portrays three stereotypical figures representing Polish youth. The figures are painted against a white background, taking them out of any socio-environmental context, but it’s clear the individuals are from a poorer background whose aspirations are: footballer, martial arts expert and model. Education or work are of no relevance to the three characters. The would-be footballer grins inanely, the martial arts/boxer with his broken nose, baggy ‘POLSKA’ tracksuit pants and aggressive stance, is the epitome of the Polish ‘Dresiarz’ (Chav, Hoodie) and the, rather plain, female figure strikes a model pose while wearing a trashy market-style skimpy outfit. The paintings title appears in large letters to the left of the canvas, the visual aspect of the text is reminiscent of a communist era wall painted slogan, with words more suited to the contemporary reality of the underprivileged youth of Poland than to the ‘encouraging’ propaganda of a PRL-era slogan. A number of his paintings portray types associated with the dodgy underbelly of Polish society, an aspect of Polish life and culture that is rarely a source of inspiration for Polish artists. 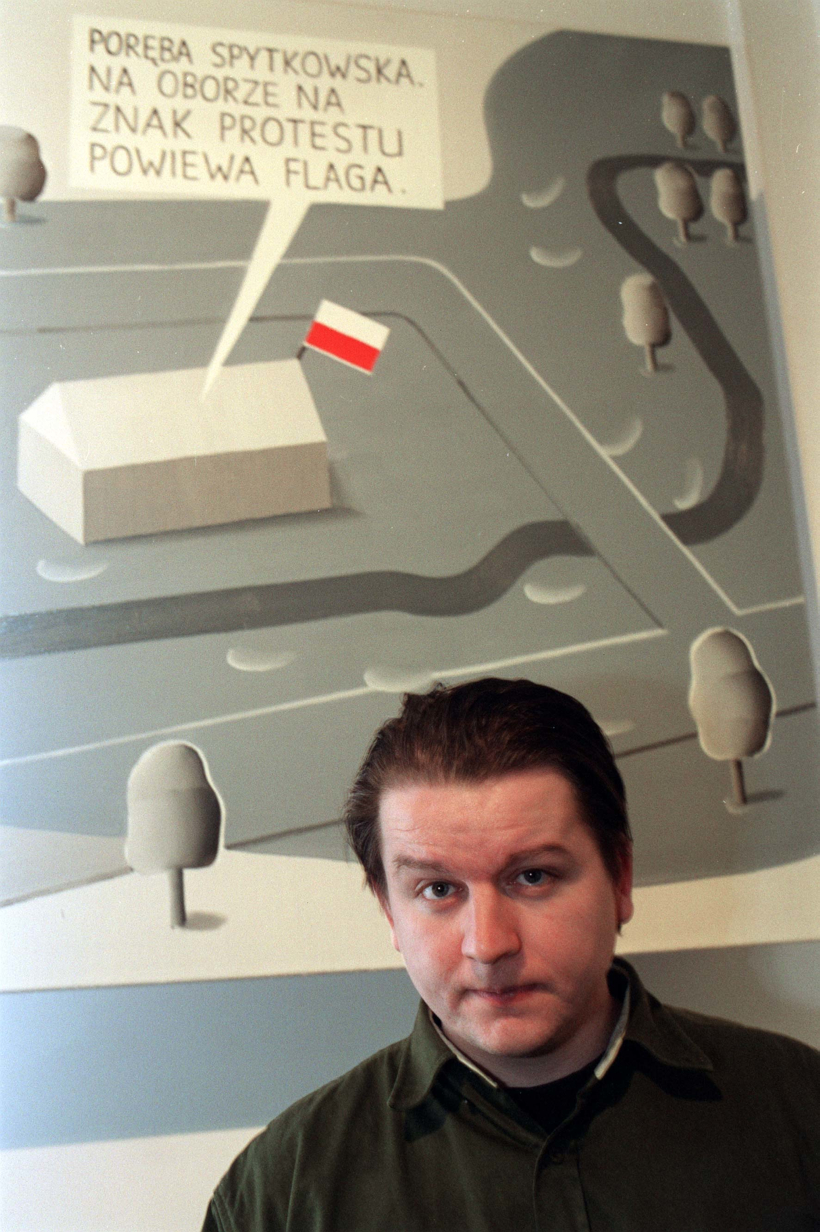 Marcin Maciejowski in front of one of his paintings in 2002.
(Andrzej Rybczyński)

Another area of interest for Maciejowski is portraiture, these include simplified portraits of famous Poles, politicians, artists, actors and models. His portrait of Copernicus (2004) is put in the context of an image illustrating an exam question, under the portrait the text reads ‘1’. Tell us what Nicolaus Copernicus was occupied with.’ Alongside the portrait, on the same canvas is question 2, under a map of Poland the question asks to point out the cities of Toruń, Frombork and Olsztyn (three cities associated with Copernicus). The portrait is a simplified, reworking of the famous Torun portrait (anonymous c. 1580).

Maciejowski studied graphic design at the Kraków Academy of Fine Arts, graduating in 2001. Between 1996-2001 he was a member of the influential Ładnie (Nice) group of artists, whose members included Wilhelm Sasnal and Rafal Bujnowski. His practice includes illustration and graphic work. Since 2000 he has been a regular contributor of comic-strip illustrations to the popular socio-political and cultural quarterly Przekrój.

In 2001 Maciejowski was awarded a Bayer AG scholarship and in 2002 he was the recipient of Polityka's Paszport, awarded by the Polish weekly magazine Polityka, 'for perceptiveness, sense of humour and the innovative use of advertising practices to describe contemporary Polish customs.’

Internationally acclaimed sculptor, Magdalena Abakanowicz, would have been 88 today

Zbigniew Libera – the man behind the infamous Lego death camp