Looking like the back of a bus? Not this slick, eco-friendly mountain-design Transport Centre

The resort town of Zakopane, in southern Poland, has been a top destination for generations of tourists seeking a mountain break.

Now the town, located around 100 km south of Kraków, is set to get a new eco-friendly Transport Centre on the train station’s territory.

The design has been chosen in a competition organised by the Town Hall, encompassing elements from shelters over the bus stands to details, from rubbish bins to bike stands, and from lighting to information boards. The competition announcement also listed greenery, expressing a preference for endemic species.

In addition, officials wanted the design to be rooted in Zakopane, known for its mountain setting and culture.

The winning design, by Tomasz Galica and Anna Muras, ticks all these boxes.

Galica and Muras did not want the Transport Centre to be yet another concrete building that might be anywhere in Poland. Instead, their design evokes the surrounding region of Podhale, which is sometimes called the “Polish highlands” – from its natural landscape to traditional wooden architecture. 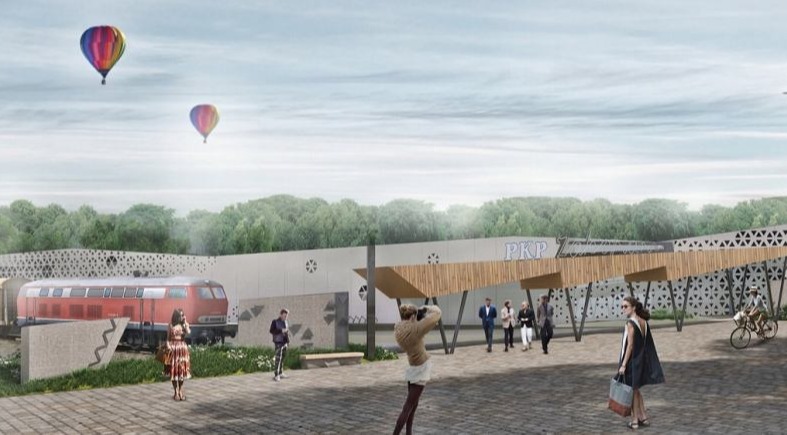 New Transport Centre will be built on the train station’s territory.UM Zakopane

“Creating this concept, we were guided by the idea that the tourist getting off the bus immediately know that he is in a mountain town. In the design, we wanted to take into account as much greenery as possible and this mountain nature and climate,” said Galica, who works at an architecture studio in Zakopane, and has completed over 20 projects, from houses to ski lifts.

This local focus extends to greenery, with the designers proposing to only use plants that grow in the surrounding Tatra mountains.

Justifying their decision, the competition’s organisers cited how the design evokes the mountain context and the culture of its people, the górale.

“The interesting choice of detail, along with materials and colours characteristic of local architecture, is worthy of attention,” they added.

With the design offering architectural potential, a tender for the project will be announced in November, according to local reports. Construction is expected to be completed in 2021.

Galica and Muras received the winning prize of 30,000 złoty. Cash prizes were also awarded for the second and third place.