After travelling the length and breadth of the country in pursuit of pleasure, our man Webber says he’s hit the jackpot TEN TIMES! 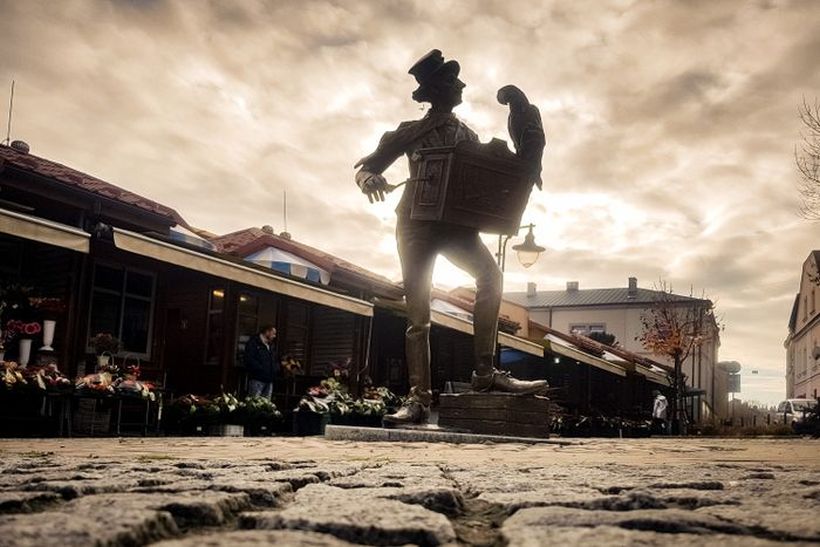 Completed in 1910 in spectacular Austro-Hungarian Secessionist style, Tarnów’s station seduces with the kind of unrestrained majesty that reminds of the halcyon days of the Orient Express.

Once an 18th century tavern, the Ethnographic Museum houses Europe’s most important exhibition related to Roma culture, while other attractions present themselves via a voluminous cathedral piled high with historic tombs and glimmering stained glass details.

The Old Town’s narrow passages, dipping stairwells, shaded courtyards and leaning defensive walls paint a vivid picture of the past, but nothing outranks the Rynek in terms of X-factor.

Ringed by arcaded townhouses, these stare onto the square’s centrepiece, a Renaissance town hall crowned with 14 grotesque stone faces and a hand-cranked clock. 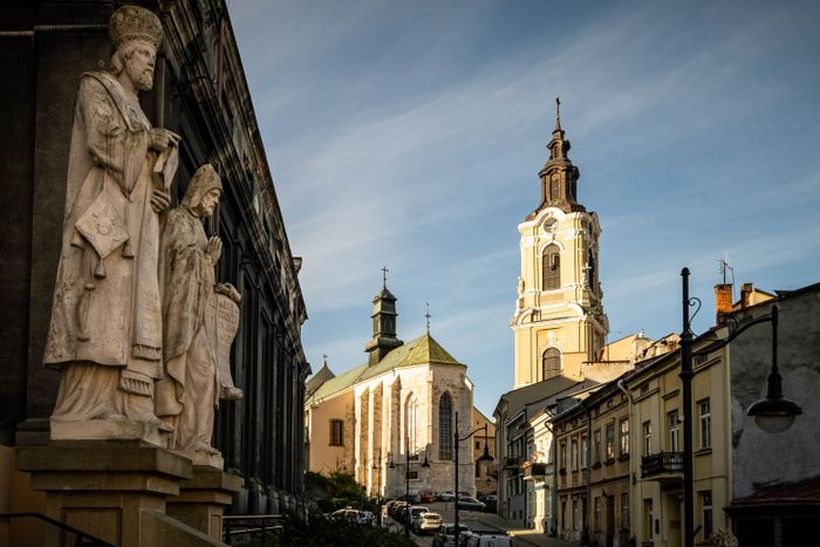 Bringing to mind the palatial residences of the Habsburg Emperors, Przemyśl’s train station stops visitors in their tracks with its neo Baroque swagger.

But while it is an attraction in itself, visitors find themselves drawn to this remote town for its rich medley of historic fortifications and sloping old town streets.

Look for the jolly-looking, beer-swigging statue of the Good Soldier Svejk, get baffled at the Museum of Bells & Pipes and creep yourself out at a nuclear bunker.

Overrun by unruly, knotted vines and thick vegetation, photographers – both amateur and professional – will appreciate the timeless appeal of a Jewish cemetery that’s thick with half-shattered tombs and splintered memorials.

Łódź You Believe It? 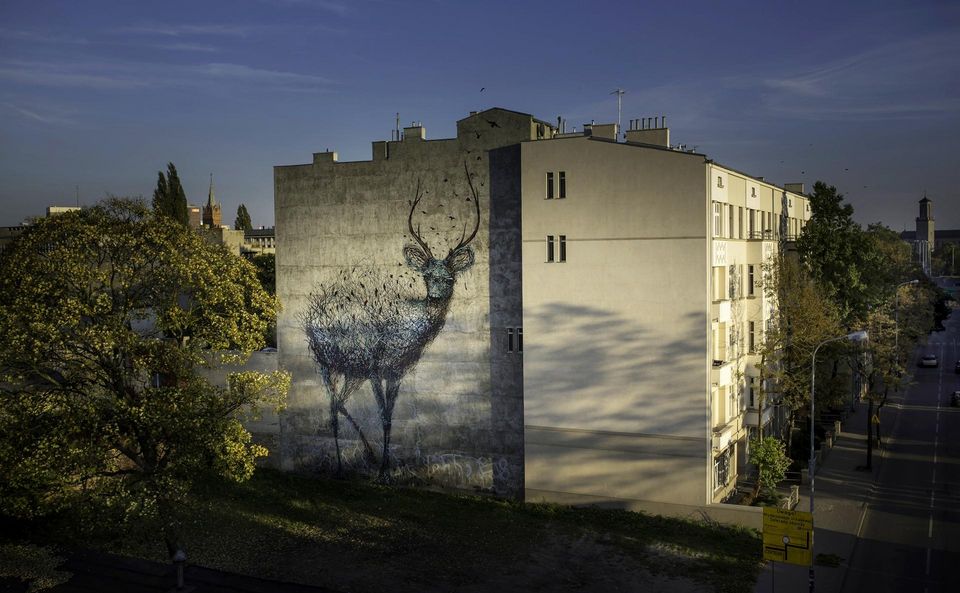 Historically known as an industrial city of belching black chimney stacks and sprawling redbrick factories, Łódź has since reinvented itself as Poland’s creative hub: you visit for a dynamic nightlife and it’s world famous street art.

But that’s not the only thing that this city is known for. Often nicknamed Holly-Łódź, Poland’s cinematic capital touts its own Walk of Fame, a Fairy Tale Trail and numerous other attractions that reference it’s association with film: Roman Polanski studied here, and David Lyncy holidayed here, perhaps attracted by its faded grandeur and rickety, retro charms.

Unmissable is the Cinematography Museum, an eclectic palace brimming with early cinema gadgetry, bits of old sets and what was reputedly the planet’s largest collection of Andrzej Wajda film posters.

Don’t say no to Gniezno 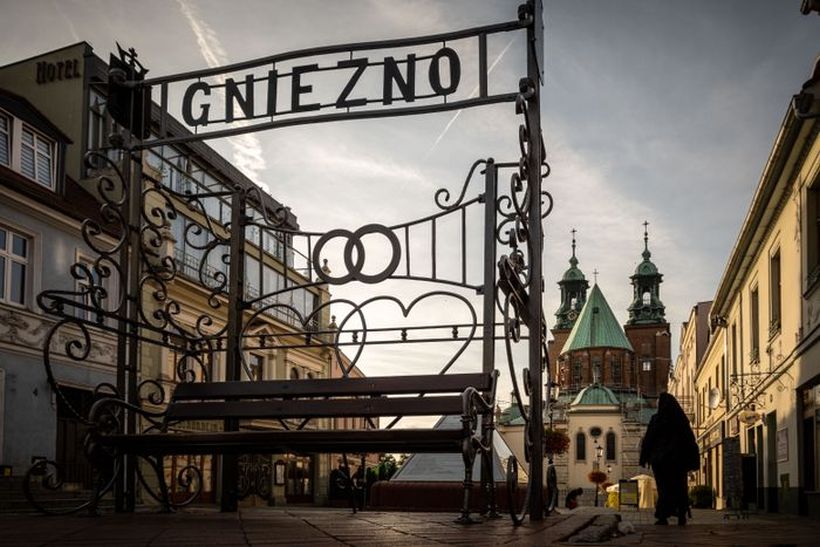 The first capital, the cradle of Polish state, and the birthplace of its Christianity, today’s Gniezno has much more offer to visitors than glimpses into bygone past.

Generously sprinkled with bizarre rabbit figures, walking the Old Town is an explorative joy, even more so given the general lack of tourists.

And you simply can’t miss the town’s principal landmark: known across the country, the mammoth Cathedral is noted for two winged bronze doors which depict grisly scenes relating to St. Adalbert of Prague’s martyrdom.

Have A Gdańsk Art Attack 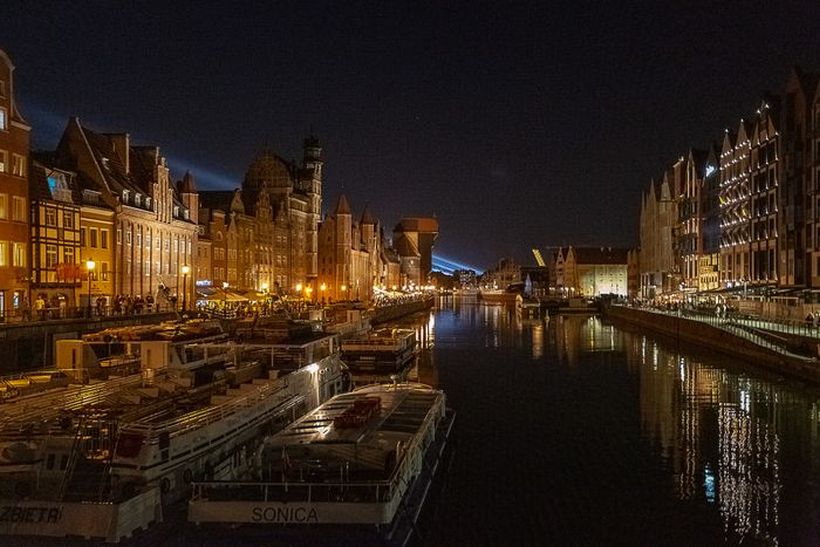 With its handsome, tall tenements and shimmering canals there’s much about Gdańsk that brings to mind images of Amsterdam.

Inexorably connected with the Solidarity movement and the outbreak of WWII – both of which are honoured by way of two world class museums – once the essentials are ticked off celebrate the city’s more alternative side by visiting what has been dubbed the globe’s largest gallery of outdoor street art.

Found in the blue collar Zaspa district, over sixty large scale murals decorate the once tomb-like tower blocks of this working class suburb.

Often referring to aspects of local history, these mighty works have lent the area spirit and identity. 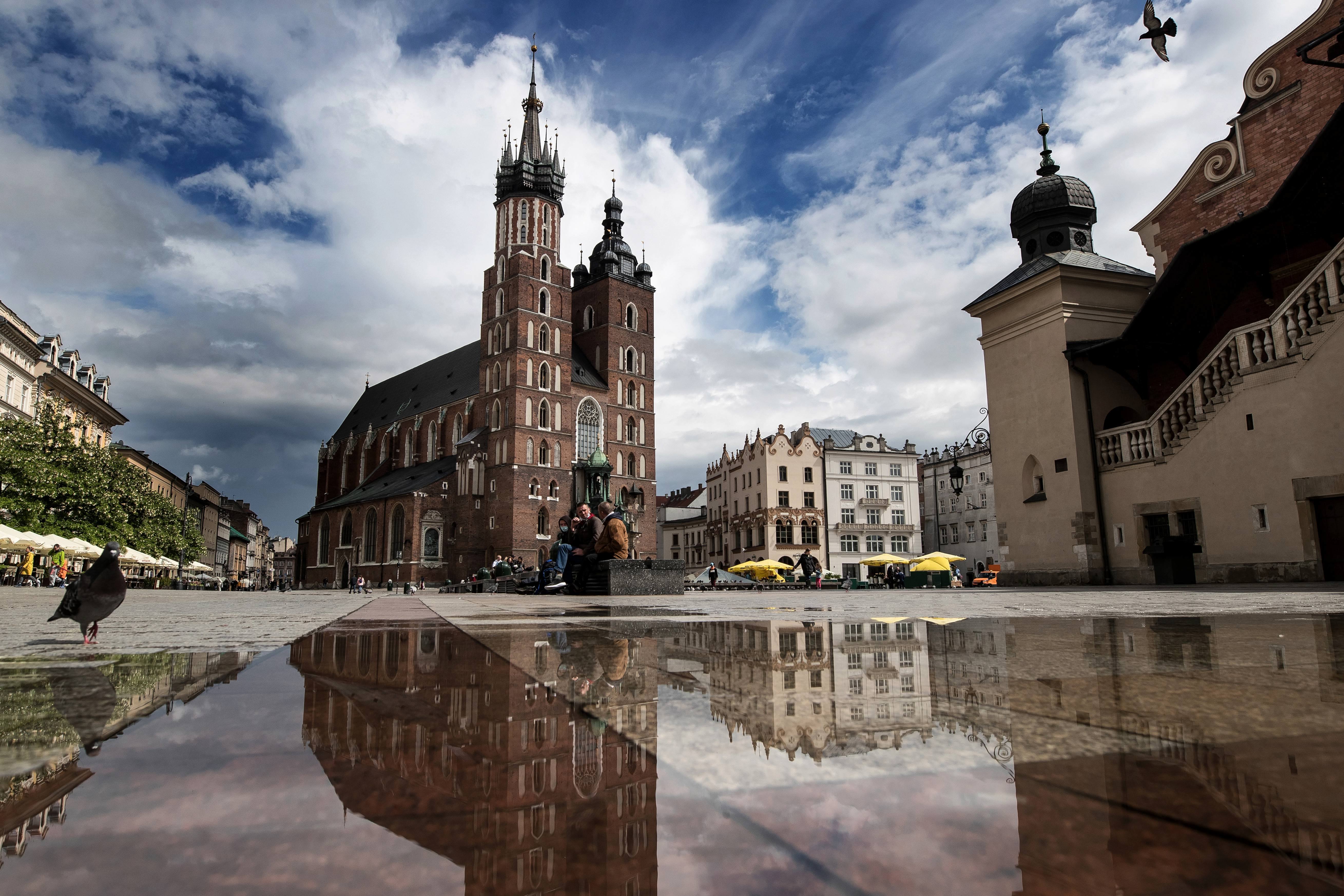 But having chalked off the must-visits for the umpteenth time, revel in the city’s more hidden side: track down the world’s daftest Elvis memorial, visit the thunderingly awful Waxworks Museum (you’ll be glad you’re not famous) or catch a Cold War chill at Nowa Huta’s nuclear bomb shelter.

When those are done, get sentimental at a memorial to Dżok – the city’s most faithful dog – or explore your mystical side by climbing the ancient Krakus Mound. Close by, plunge down the ravine to walk amid the overgrown remnants of Spielberg’s set for Schindler’s List. 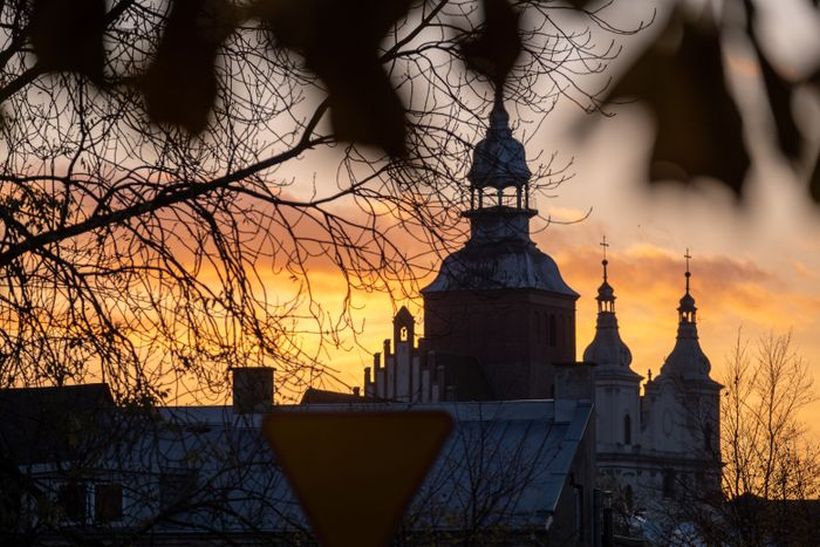 No-one visits Piotrków Trybunalski, which is exactly why YOU should.

An elegant backwater of sedate soul and spirit, just the walk to Old Town is a buzz in itself: with mouth agog, find yourself prowling past majestic 19th century governmental institutions, Baroque-era monasteries, an onion-domed Orthodox cathedral and neat-looking tenements of uniform height.

Feeling pristine, provincial and a little subdued, the Old Town itself is free from the usual neon trappings of Poland’s more high profile destinations, and this untouched authenticity has helped make it one of the country’s most filmed cities: even Robin Williams has been here!

Quiet as it is, there is also a more riotous side to Piotrków T. Regarded as one of the nation’s beeriest cities, learn more about its brewing heritage at the Beer Museum just off the Rynek.

One ’Ell Of A City 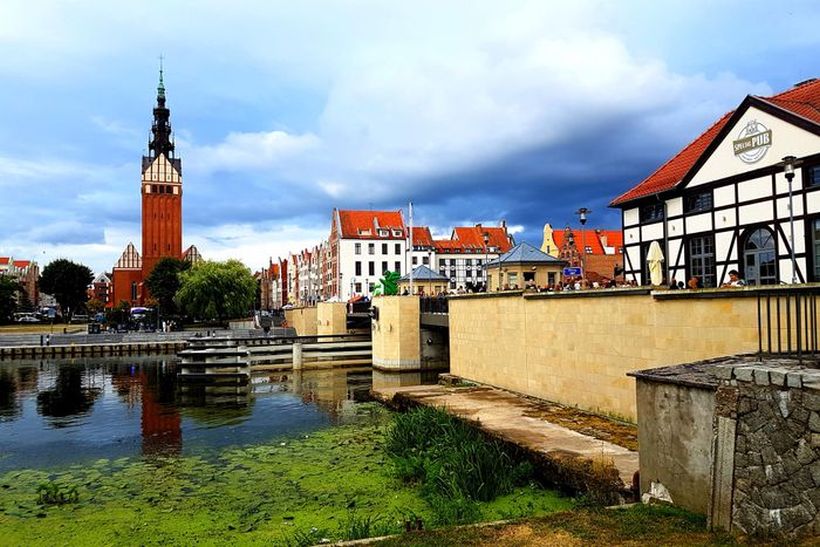 Viewed in the evening’s hazy half-light, it is a scene to treasure: on calm, cobbled streets long, angled shadows fall on pavements bristling with parasols that mask the quiet café chatter.

In the distance, peeling church bells call out from towering bastions, and on occasion, the plaintive whisper of a busker’s violin ripples from a side street. But this isn’t some ancient walled city or one of UNESCO’s sites of fancy, rather an Old Town so new that it’s yet to be completed. Welcome to Elbląg.

Flattened by the Red Army during their relentless march to Berlin, the last couple of decades have witnessed a remarkable reconstruction program that has blessed Elbąg with Poland’s newest Old Town.

And if that doesn’t appeal, who wouldn’t be intrigued by the prospect of taking a look at Europe’s oldest set of eyeglasses – dating from the 15th century, find them in the city’s main museum.

A Tale Of Two Cities 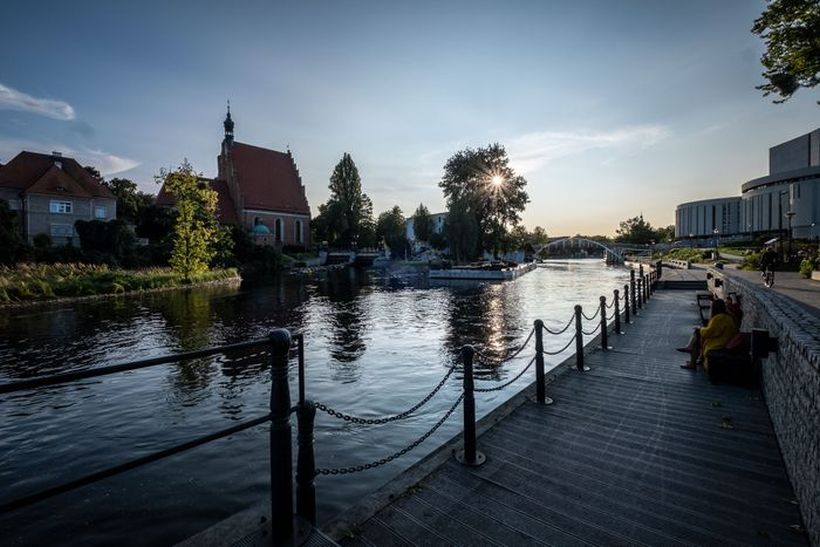 Practically a stone’s throw from each other, Toruń and Bydgoszcz make a perfect little pair for a weekend to remember.

In the former, discover one of the world’s finest presentations of Gothic architecture. Famed for its associations with the astronomer Copernicus, it’s one of the tastiest towns in Poland thanks to a historic reputation for its gingerbread: enjoyed by Chopin and Pope John Paul II, the town’s signature treat even has its own museum.

Bydgoszcz, meanwhile, presents itself as a compact place of meandering canals and cross-timbered tenements. And with a museum dedicated to Soap & Dirt, it’s also got one of the country’s more curious attractions. 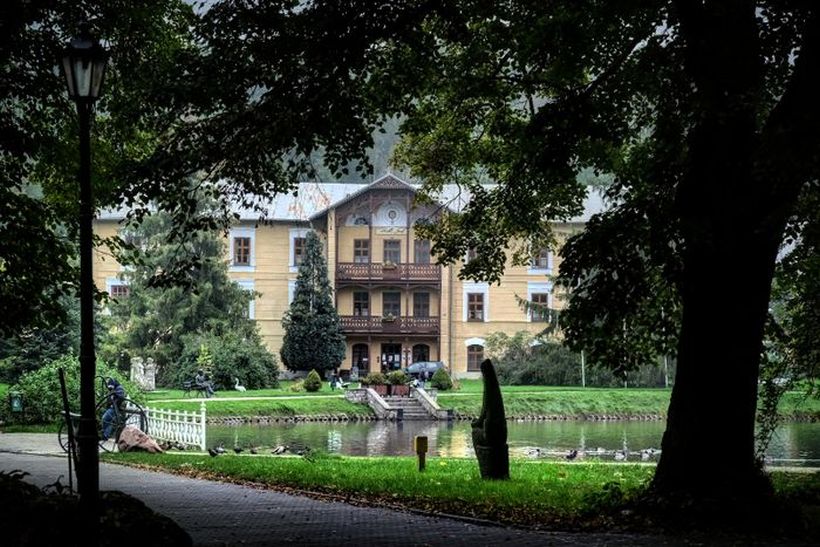 A place of pristine lawns and ribboning pathways, Park Zdrojowy in Nałęczów would top any list of Poland’s best parks.

Offering complete tranquility, the overall atmosphere is perfectly in key with a town that, for two centuries, has been known for its healing waters.

Often set in ornate wood-trimmed mansions, the Nałęczów’s spas are celebrated across the country for their therapeutic properties.

But while the average age of visitors use to approach triple figures, today this pocket-sized town wins praise for a unique treehouse hotel by the name of W Drzewach and one of the best restaurants in Central Eastern Europe.

High on swirls and artsy fancy, indulge yourself at Water & Wine, a fine dining restaurant whose tasting menu is paired with different types of water.

For schedules and information regarding PKP’s Intercity trains visit intercity.pl or call
703 200 200 (PLN 1.29 per minute) / +48 22 391 97 57 (subscribers of foreign networks). Tickets can be purchased online, at train stations or via the IC Mobile Navigator application.

Three people attacked by man with machete in Polish city