The people of Łódź gathered together on Friday to honour the extraordinary life of one of their most eminent and loved former citizens, Marek Edelman – Warsaw Ghetto fighter, Warsaw Uprising insurgent, distinguished doctor and social activist.

Edelman was born 100 years ago on January 1 this year, and using this as a starting point, the Dialogue Centre in Łódź that bears his name yesterday inaugurated the Marek Edelman Year, which will celebrate his life, his deeds and his message to humanity.

“I won’t tell you about Marek Edelman's work, because you all know it better than I do,” Dialogue Center director Joanna Podolska told the audience. “I’m very happy that this year will be the year of this great hero, Pole and citizen of Łódź. I’m also convinced that it will be the year of Marek Edelman not only in Łódź, but throughout Poland as well,” she added.

Indeed, for the hundreds who squeezed into the Dialogue Center’s ultra-modern complex in Łódź’s Park of the Saved in the north of the city, no introduction to the great man was necessary. 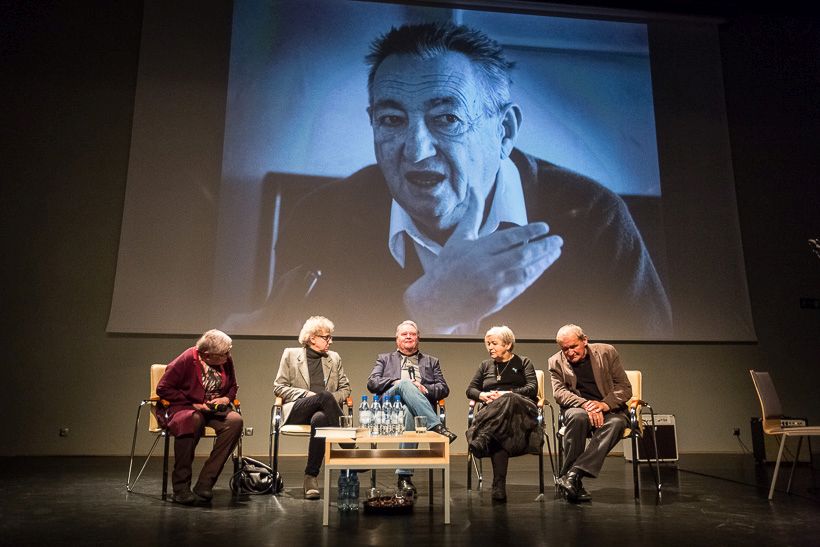 The launch of the Marek Edelman Year. The year will celebrate his life, his deeds and his message to humanity.Kalbar/TFN

They all knew very well that Edelman was the last commander of the Warsaw Ghetto Uprising fighters in 1943 at the end of their desperate battle for dignity, miraculously emerging alive from the burning ghetto through the sewers. “We were beaten by flames not the Germans,” he insisted.

They knew that he went on to fight in the Warsaw Uprising in 1944, which he saw as the ghetto uprising’s natural continuation in the fight against fascism. When the population of Warsaw was expelled by the Germans, he remained living in the rubble and again miraculously survived after being saved by the Home Army.

And there is no doubt that everyone present knew that after the war Edelman settled in Łódź, studied medicine and went on to have an outstanding career as a cardiologist in the city.

Edelman was also involved in the underground movement in Poland in the 1970s and 80s. He was interned during martial law in 1980, took part in the Round Table talks in 1989 and was a life-long committed anti-fascist, anti-racist and a support of human rights. 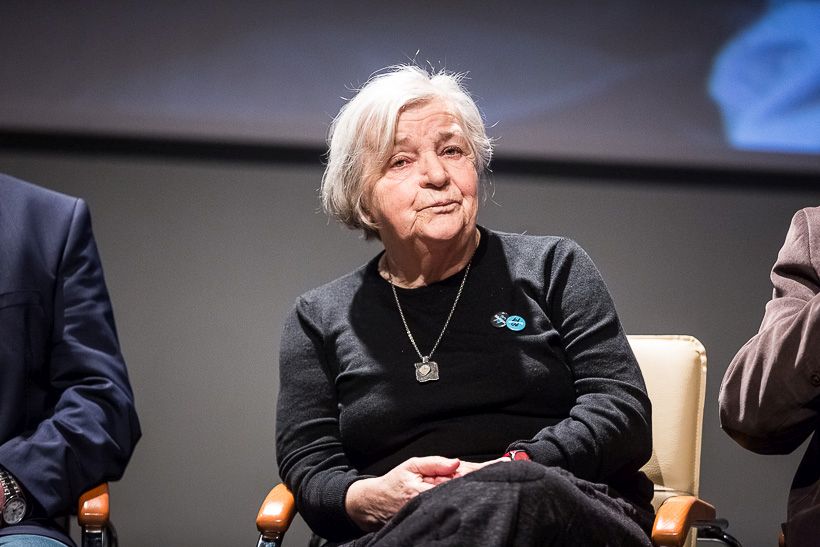 “He had huge empathy for his patients; it didn’t matter if it was government minister or a cleaner, his approach was always one of great humanity,” said Joanna Żuchowska, who worked with Edelman.Kalbar/TFN

Although diminutive in stature, often seen wrapped in the thick smoke of a French cigarette (usually Gauloises, but Gitanes in an emergency) and wearing an ill-fitting baggy sweater, Edelman’s influence reached far outside Poland. For example, he provided the moral justification for Bill Clinton’s Kosovo intervention after the US president quoted Edelman’s humanitarian plea before launching his airstrikes against Serbia.

Friday’s audience also enjoyed hearing about how former Czech president Vaclav Havel turned one of his visits to Poland upside down just to visit Edelman in Łódź, stunning neighbours at his modest home when Havel’s lengthy presidential cavalcade turned up.

This year will also mark the 10th anniversary of Edelman’s death, and yesterday’s meeting was a time to reflect on his life and legacy.

Joanna Żuchowska, who worked with Edelman at the cardiology department at the Pirogowa Hospital in Łódź for over 20 years, told TFN: “He had huge empathy for his patients; it didn’t matter if it was government minister or a cleaner, his approach was always one of great humanity. He was a teacher of life and he spoke wisely on many subjects. The legacy that he left us is huge.” 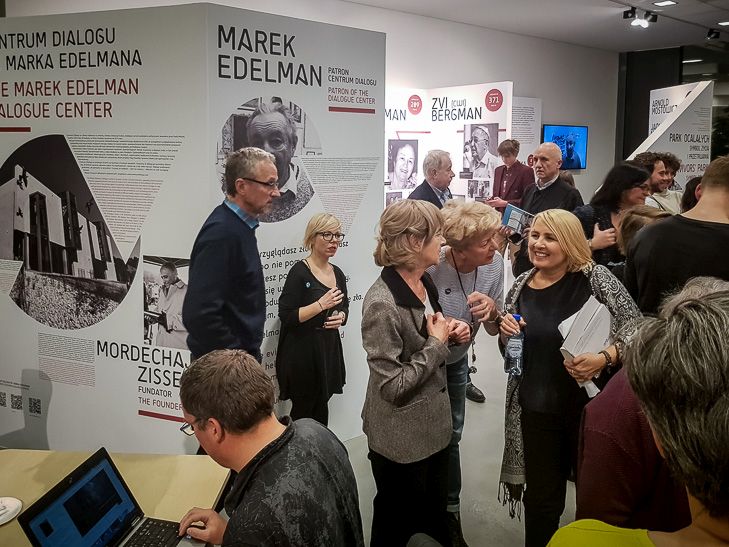 Edelman lived in Łódź for most of his life.Kalbar/TFN

Another friend from Łódź, Irena Jaros, told TFN: “He was a hero but he didn’t consider himself a hero. Luckily, he lives on through his words.”

Among those who know Edelman’s words best are Witold Bereś and Krzysztof Burnetko, authors of the book published in English ‘Marek Edelman. Being on the Right Side.’ The pair spent many weeks over a number of years interviewing Edelman and distilled his thoughts on life and death.

On fighting fascism: “I’ve witnessed genocide and have been persecuted by the perpetrators of genocide. I know what it means. Those who destroy must be destroyed. Dictators do not give up on their own. They will never give up on their own. Fanatics can only be stopped from committing a crime by force.”

On God: “God? Give me a break…If the kingdom of heaven on earth hasn’t already been built then it’s not possible.” 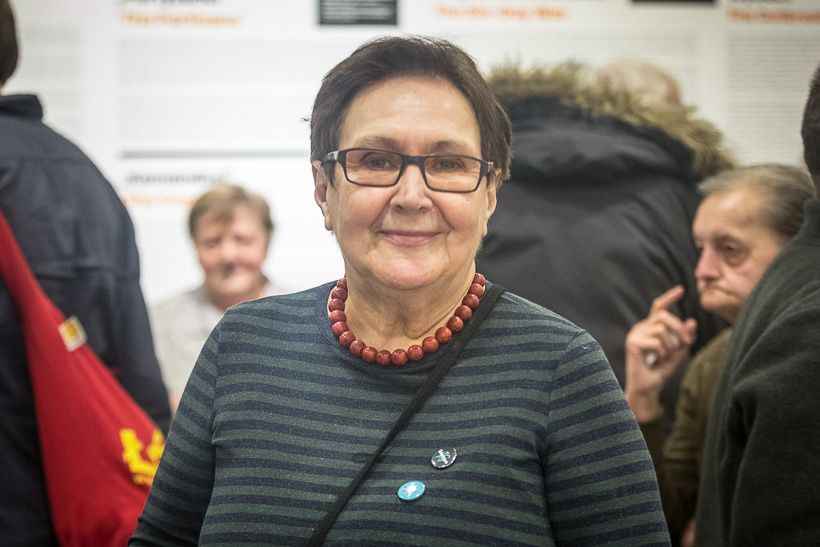 Irena Jaros, told TFN: “He was a hero but he didn’t consider himself a hero. Luckily, he lives on through his words.”Kalbar/TFN

On difficulties: “What to do when life is hard? Don’t pay attention to it. Just carry on. If you know what is good and what is bad, you just go your way.”

On prejudice: “Anyone can be an anti-Semite, Germans, French, Poles, even Jews.”

On relationships: “No-one can survive alone – without being able to cuddle up to someone, without someone for support.”

On looking the other way: “When you look upon evil and turn the other way, or you don’t help when you can, you are jointly responsible.”

Closing the evening, Joanna Podolska called on the audience to take Edelman’s message beyond Łódź. “Sometimes it seems that if something isn’t happening in Warsaw, then Warsaw is not interested,” she said. “Let’s make sure that not just Warsaw knows about the Marek Edelman Year but also the whole of Poland.”