Lockdown and isolation: the summer a Polish city defeated an outbreak of one of the world’s deadliest diseases

The city of Wrocław is in a full lockdown and surrounded by a sanitary cordon. But this is not 2010, it is 1963 and the city has been hit by one of the last outbreaks in Europe of one of the world’s greatest killers; smallpox.

The extremely contagious and deadly disease reappeared in Wrocław in June 1963. The disease, which had killed over the centuries an estimated 300-500 million people, had been brought back by Security Service Lieutenant Colonel Bonifacy Jedynak. Some sources say he contracted it in India, others that he caught it in Burma and Vietnam.

At first, the officer was diagnosed and successfully treated for malaria. It was only later on, when the nurse who took care of him at the Ministry of Internal Affair’s hospital in Wrocław fell sick, that it became obvious that something else was afoot. The nurse Janina Powińska would become the secondary source of the epidemic. 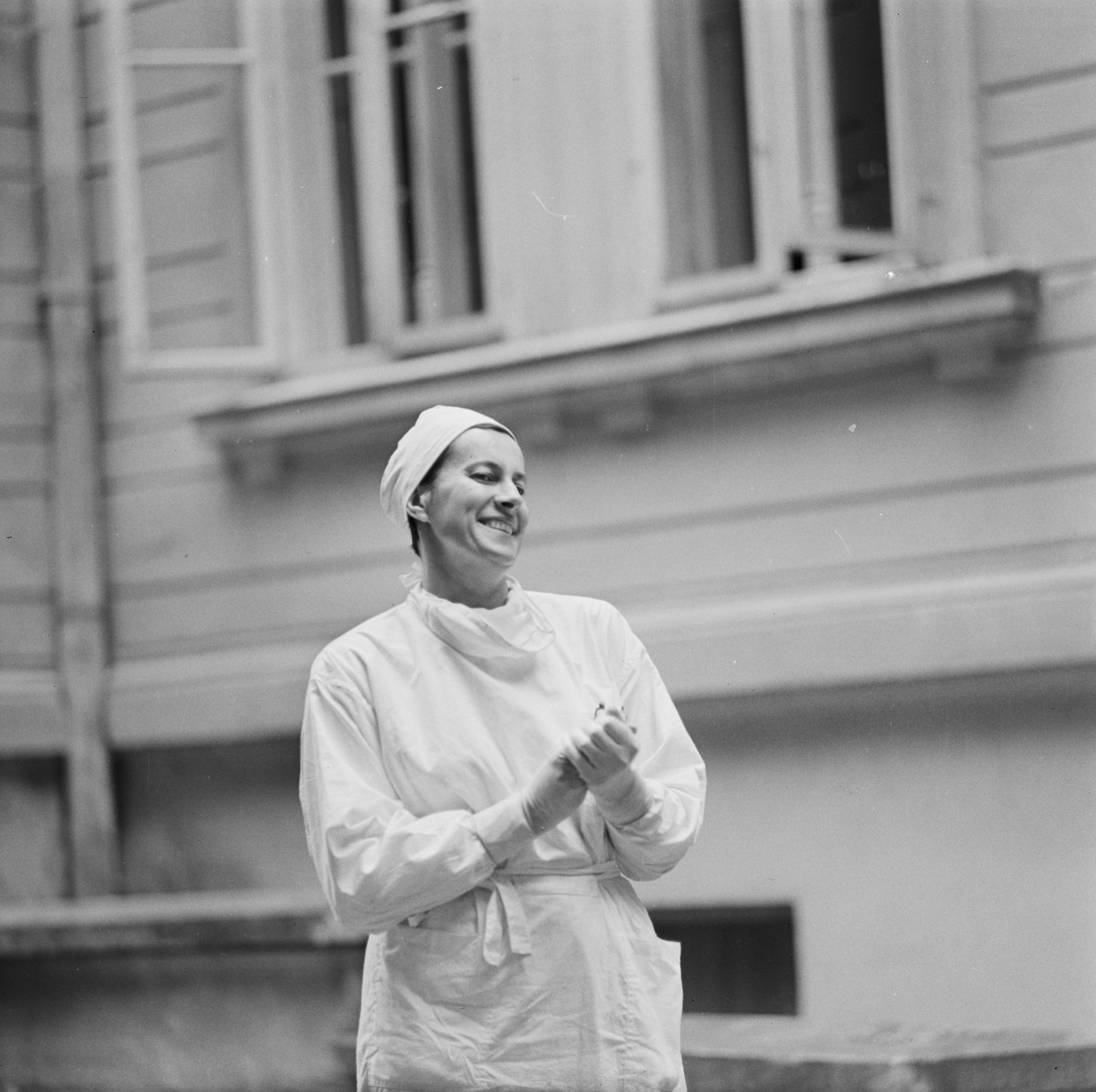 Alicja Surowiec, the head of the team of the doctors charged with fighting the epidemic.Eugeniusz Wołoszczuk/PAP

Smallpox, an ancient disease that existed for at least 3,000 years is caused by the variola virus. At first the sick suffer from a high fever and fatigue, and later on from a characteristic rash with fluid-filled spots. The disease can be fatal in up to 30 percent of cases.

With a growing number of patients complaining of smallpox-like symptoms, including the nurse’s family, her daughter Lonia Kowalczyk was the first victim—though her death was initially attributed to leukaemia—Wrocław doctors were confronted by something truly terrifying, a smallpox outbreak.

Although in the first month of the disease's reappearance in the city only five people fell sick, the danger was real. Smallpox spreads very quickly in large groups of people, especially through person-to-person contact and saliva droplets in an infected person’s breath. 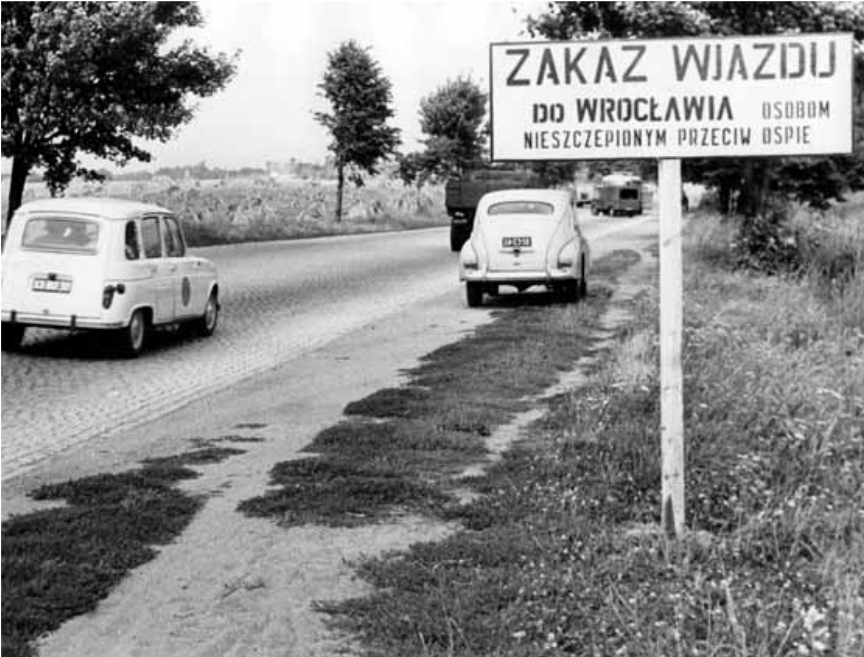 A sign saying people who have not been vaccinated are forbidden from entering Wrocław.Public domain

Faced with the threat of an entire city being infected, 47 days after the first case, the local authorities announced a state of anti-epidemic emergency on July 15. The Polish Film Chronicle produced a 10-minute-long newsreel shown in cinemas before the main film that described the crisis in Wrocław.

Lucjan Szołaski, the narrator, read in dramatic tones: “Wrocław, the centre of the smallpox outbreak, surrounded by a protective wall of vaccinations. Since mid-July, the vaccination certificate has become the most important document. Strict control when entering and leaving the city. You won’t buy a ticket at the ticket office. The Railroad Guards won't let you leave.“

To contain the disease’s spread, Wrocław had been put under lockdown and isolated from the rest of the country. Nevertheless, smallpox got out of Wrocław and was also treated in five other regions without causing an epidemic. To counter the virus, a mass vaccination campaign was carried out, with more than 200,000 people receiving the shot. Still, the Communist government was reluctant to admit the seriousness of the situation. 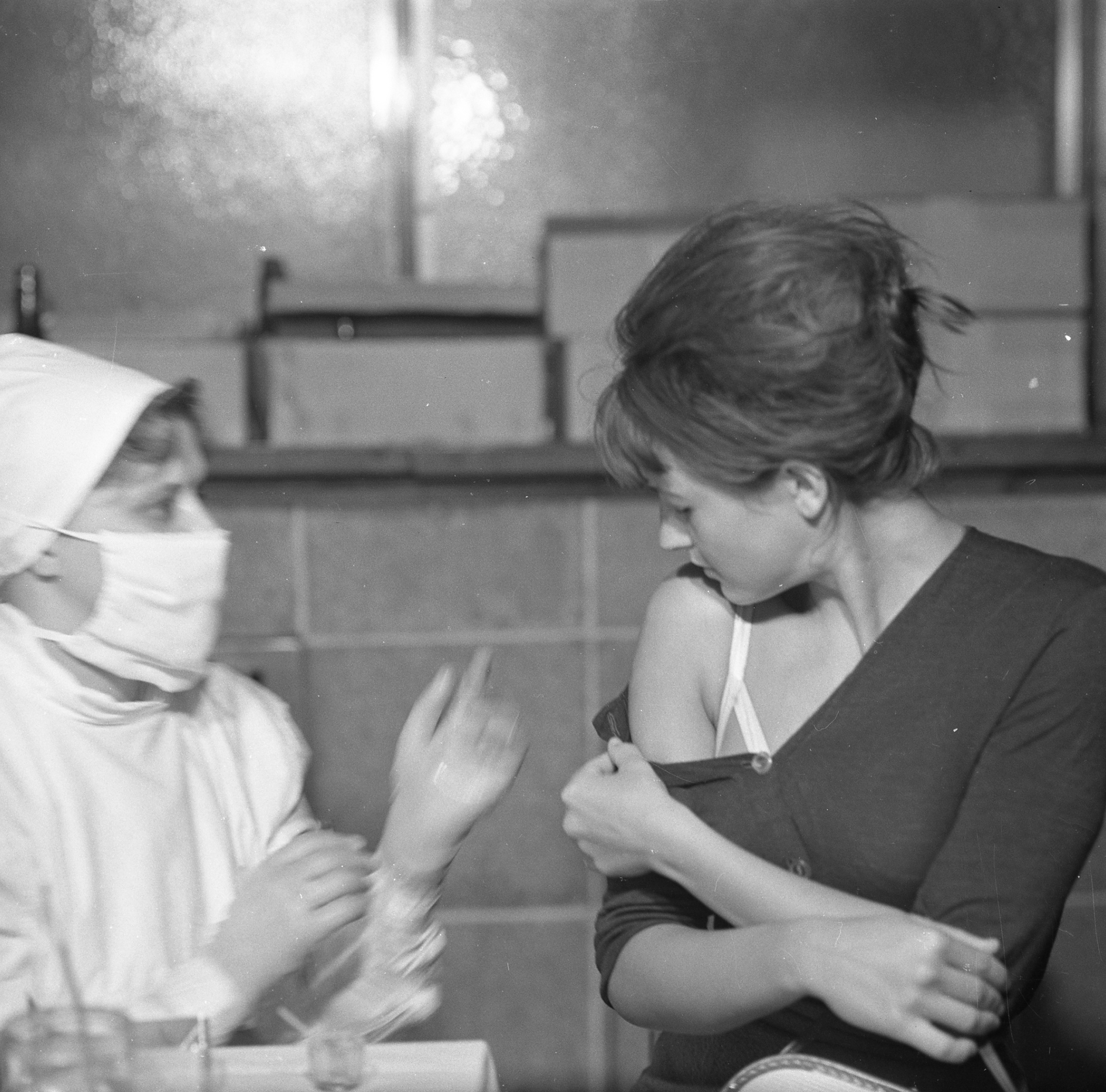 “Variola vera, smallpox, one of the oldest and most dangerous infectious diseases. In these hard days, Wrocław lives and works normally. The city is ruled by doctors. It’s an E.R. for the whole health service,” proclaimed Szołaski in the Film Chronicle.

It was only on July 25, 10 days after the declaration of a state of epidemic emergency did the first official announcement about the gravity of the situation appear, owing to the arrival of the press from other cities.

The disinfectant chloramine became ubiquitous, door handles were covered in bandages and people were warned to greet each other without shaking hands. 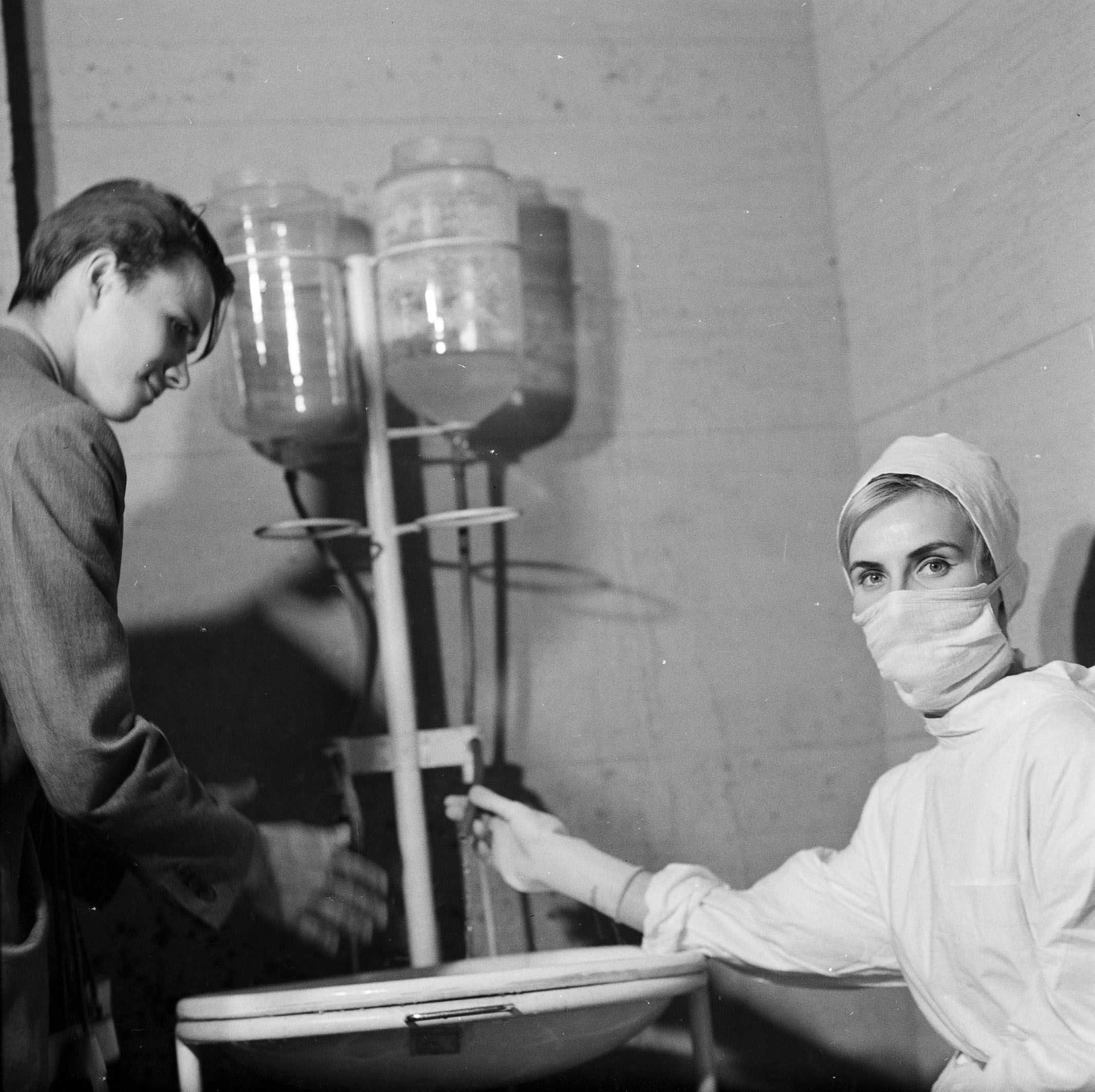 “Dozens of doctors and nurses have voluntarily cut themselves off from the world. They locked themselves in the Szczodre Hospital. They work day and night during the tropical heat in protective clothing and face masks,” continued the Chronicle.

For 2,000 people ‘izolatorium’ (isolation facilities) became their new homes.  If someone was suspected of having contact with smallpox, they were transported to quarantine centres in Szczodre, Pracze Odrzańskie or Psie Pole. Although footage from the facilities brings to mind summer camps, the safety of patients was treated seriously.

“In order to prevent the spread of the epidemic, all those suspected of any contact with the patients had to be isolated. Three weeks of quarantine, a break in normal life. Complete isolation. Food delivery with full precautions. No object from the isolation facility must be touched. The only contact with the world - phone. Chloramine everywhere. Chloramine flooded pavements, chloramine-saturated mattresses disinfect tires,” described Szołaski. 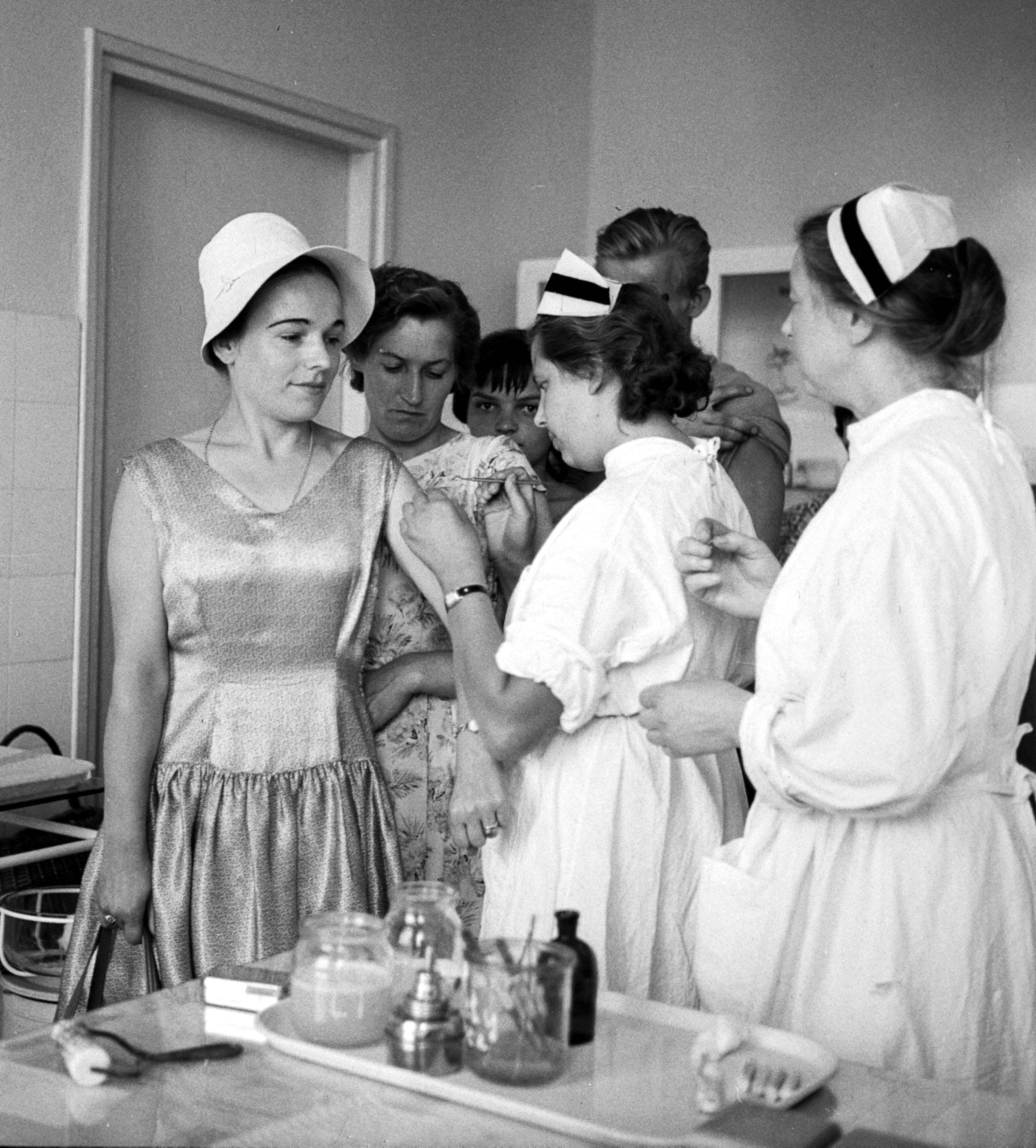 The World Health Organization predicted that the epidemic would last two years and at least 2,000 people would contract the disease, with 200 dying. Contrary to their predictions, there were only four new cases after August 7. The state of epidemic was officially ended on September 19.

The Film Chronicle ended with the words: “The epidemic curve is falling. More and more people are leaving the isolation facility but the fight against smallpox is still on. Wrocław passes a difficult test.” 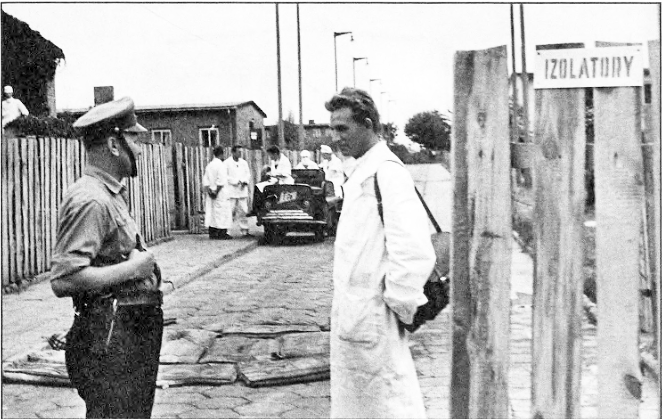 A policeman stands guard at the gates of an isolation unit.Public domain

In the end, over 2,000 people were placed under quarantine, 99 fell sick, many among them were medical personnel, and seven died. Thanks to the mass vaccination, as well as the actions of medical personnel, border guards, sanitation services, and law enforcement the epidemic was prevented from spreading further.

The WHO officially declared the eradication of smallpox in 1979. The last known natural case was in Somalia in 1977. Since then, the only known cases were caused by a laboratory accident in 1978 in Birmingham, England, which killed one person and caused a limited outbreak.