Letters from Auschwitz: online exhibition shows letters from one of the first prisoners sent to the infamous Nazi camp

A collection of 21 letters sent from Auschwitz by Tadeusz Korczowski, a prisoner among the first transport of Poles to be sent to the camp, is being showcased on Google Arts & Culture.

The publication marks the 80th anniversary of the first mass transport of prisoners to Auschwitz, which is considered as the start of the camp’s operation.

June 14 is commemorated in Poland as the National Day of Remembrance for the Victims of German Nazi Concentration Camps.

On June 14, 1940, a transport departed from the southern Polish city of Tarnów consisting of 728 Poles and 20 Polish Jews dubbed “political prisoners” and members of the Polish resistance.

The majority of the prisoners were secondary school, college, university students and soldiers arrested in Slovakia and various towns and villages in southern Poland while crossing Polish-Slovakian border. 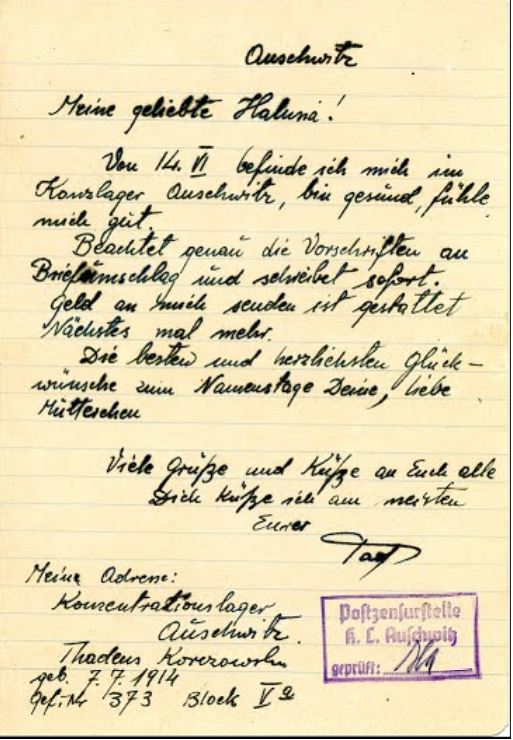 A letter to his Hannah dated August 7, 1940.Auschwitz-Birkenau State Museum

They had been arrested in the German operation Aussenordentliche Befriedungsaktion, (Extraordinary Pacification), which aimed to eliminate the Polish intelligentsia.

Most were Polish Catholics, as the mass deportations of Jews had not yet begun. Numbers 31 to 758 were tattooed on the prisoners' arms. Numbers 1 to 30 had been reserved for a group of German criminals who were brought to Auschwitz from Sachsenhausen on May 20 to be the first Auschwitz kapos.

The online exhibition entitled ‘I have been in the concentration camp Auschwitz since June 14 …’ on Google Arts & Culture features letters and secret messages sent by prisoners from the camp, as well as the history of the first transport of Poles to Auschwitz.

The exhibition gives prominence to the 21 letters Tadeusz Korczowski wrote during the 16 months he was imprisoned in Auschwitz.

In his first letter, dated August 7,1940, he writes: “I am healthy and feel good. Please follow the regulations for the exchange of correspondence carefully and write immediately. You are allowed to send money. Next time send more”. 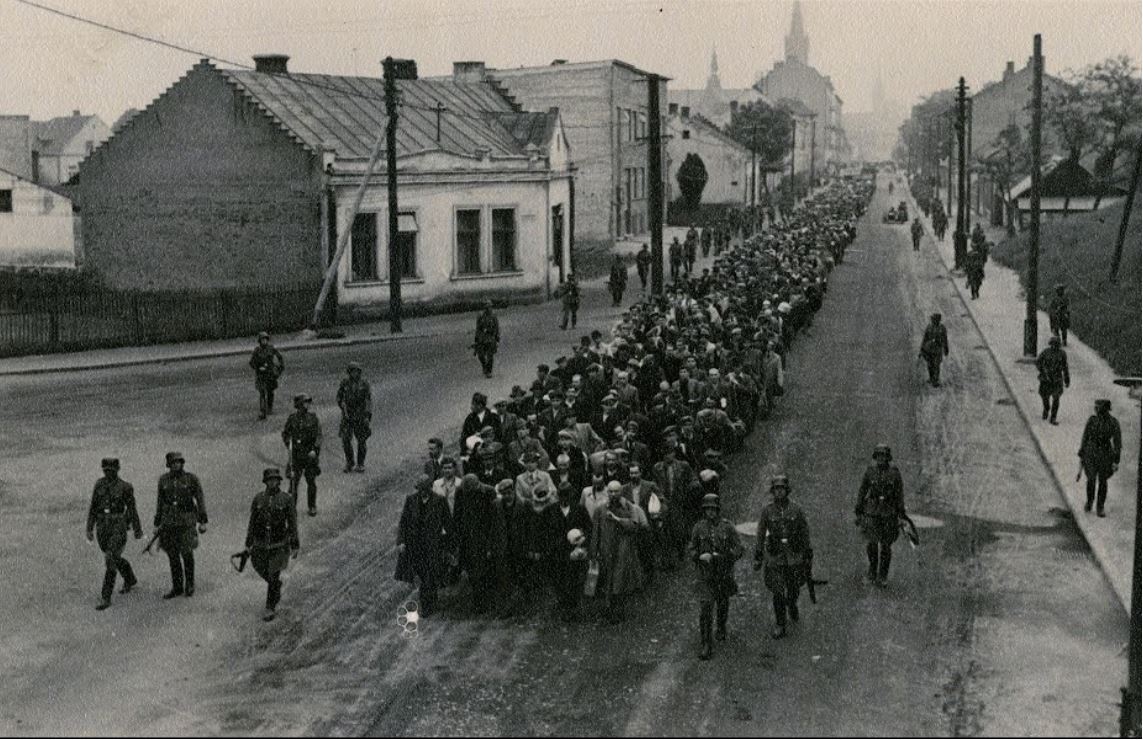 The first transport of prisoners on their way to Auschwitz.Auschwitz-Birkenau State Museum

To his mother, he wrote: “Dearest Mum, best and most sincere wishes of happiness on your name day. Best regards and many kisses for all of you. Warmest kisses for you.
Yours, Tad.”

In a letter to his wife on August 31, 1940, he wrote, “Please prepare yourself well for winter and Halunia, you should take care of your shoes.”

Auschwitz Museum spokesperson Bartosz Bartyzel explained the context of the letters: “They were written in German only. The content was subject to camp censorship and therefore could not contain any complaints about the writer's situation or information about the camp. Letters had to follow the general template: Ich bin gesund und fuehle mich gut, i.e. - I'm healthy and I feel good.”

Korczowski’s letters to his wife and mother are very emotional and show how important the opportunity to write letters home was for prisoners.

“Your recent letters have given me great joy, they have brought me a part of your life and I have the feeling that I am living with you. It has already been six months since our wedding, but don't worry, dearest Halusia, as I have already written, our time will come and then our dreams will come true,” he wrote on October 13, 1940.

Korczowski was arrested by the Germans in Rzeszów together with his brother Jerzy on May 1, 1940, and then imprisoned in Rzeszów. On May 9, 1940 they were transferred to the prison in Tarnów. 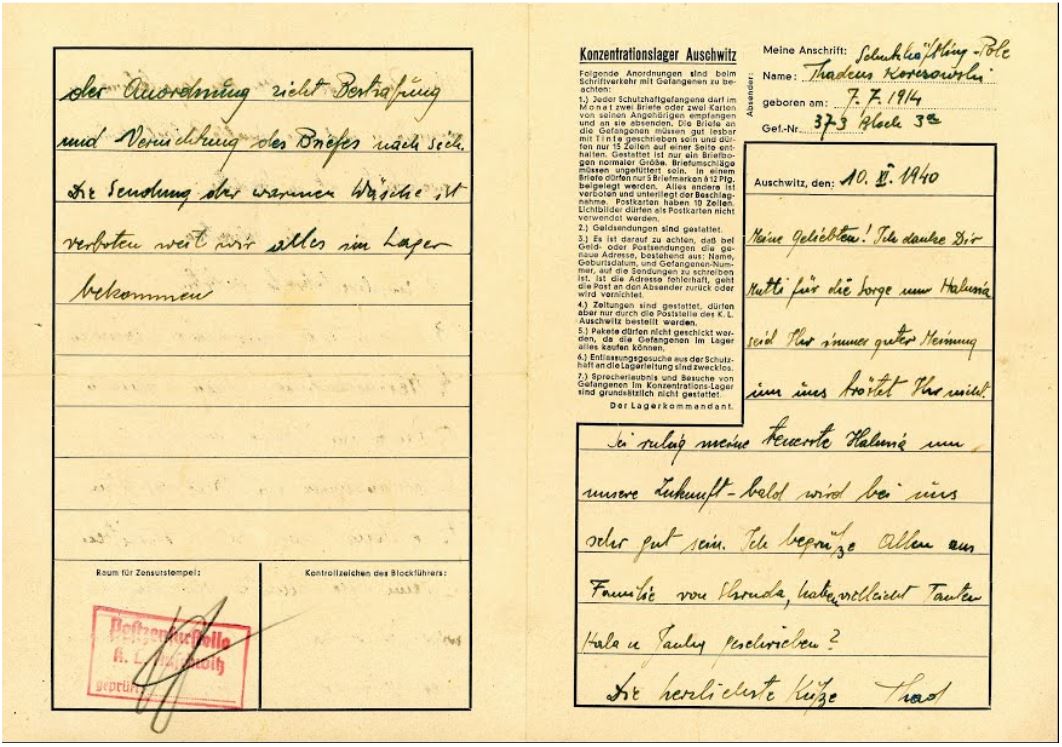 As the letters were controlled and censored prisoners could not describe the real conditions in the camp.Auschwitz-Birkenau State Museum

From there, on June 14, 1940, they were taken to the Auschwitz concentration camp. Tadeusz received the prisoner number 373.

He was released with his brother in October 1941. Tadeusz was sent to prisons in Kraków and Katowice, and then he was sent for forced labour in agriculture to Germany near Hanover.

In April 1942, he was released from there because of his ill health. He returned to Rzeszów and became involved in the resistance movement and joined the Home Army.

After the war ended in 1945, he was arrested by the communist security forces and held until January 1946.

According to latest research findings published recently by Auschwitz Museum, out of the 728 prisoners deported in the first transport, 325 survived the war, 292 perished, while the fate of 111 is unknown.

The online exhibition can be viewed here: https://artsandculture.google.com/exhibit/BAISKLlkMEw2Lg?hl=pl.