Let there be light! Hundreds of thousands head to Łódź to see the city sparkle for stunning annual light festival

Returning for the ninth time, the annual Light. Move. Festival. has seen the city of Łódź bathed in a sea of spectacular light and colour, thrilling audience figures that are set to break last year’s record of 700,000.

Inaugurated on Friday, the three-day undertaking will reach its climax tonight having already been pronounced a resounding success.

Founded by Beata Konieczniak and Norbert Wasserfurth-Grzybowski, the event has rapidly evolved to become one of the city’s calling cards as well as a prominent feature on Europe’s festival circuit. Incorporating light installations, video-mapping, animations, illuminations, music concerts and a wide range of other miscellaneous artistic activities, it’s credited with playing a leading role in the rehabilitation of Łódź as well as its coronation as Poland’s capital of cool.

Along with bold illuminations the festival embraces more unusual installations.www.lmf.com.pl

“Light is a miracle maker, it has the ability to change everything,” says Katarzyna Jędruszek, one of the organising team. “This festival was created to demonstrate to people what a brilliant city Łódź could be, to really show its potential, and by using light to as our medium we’ve shown you don’t need a huge financial investment to transform the city.” 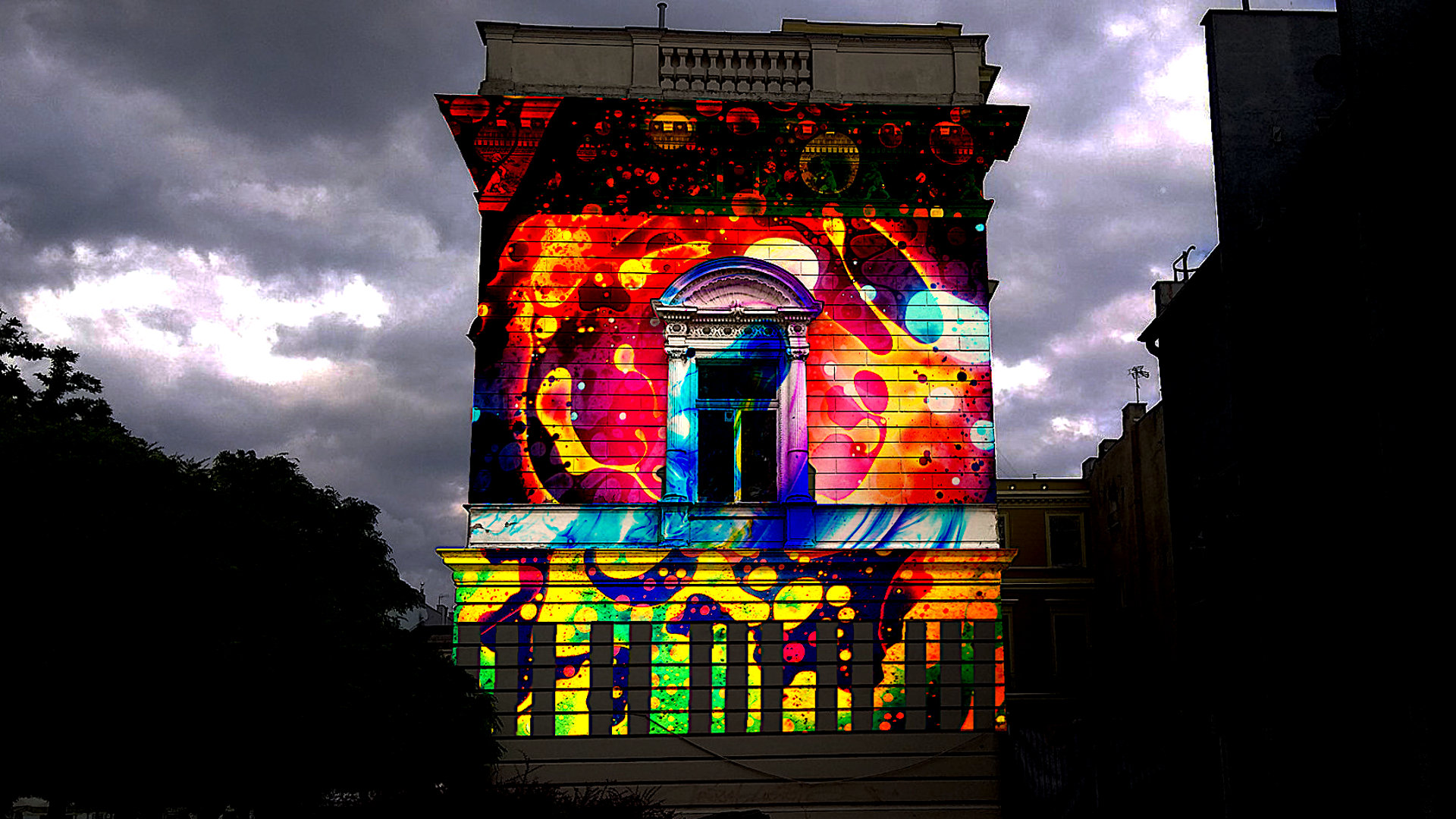 'Light is a miracle maker, it has the ability to change everything,' says Katarzyna Jędruszek, one of the organising team.www.lmf.com.pl

From humble beginnings, the Light. Move. Festival. has grown to be an inexorable part of the city’s cultural offer with this year’s extravaganza following a looping route that passes in excess of 40 points of interest.

Of these, highlights are numerous and include spatial laser shows involving moving constellations and synchronized music, 3D mappings designed to turn “regular walls” into magnificent pictures, light projections cast on and in various objects and buildings, and quirky installations that have, in the past, included glowing cat figures, herds of animals and assorted shapes great and small. 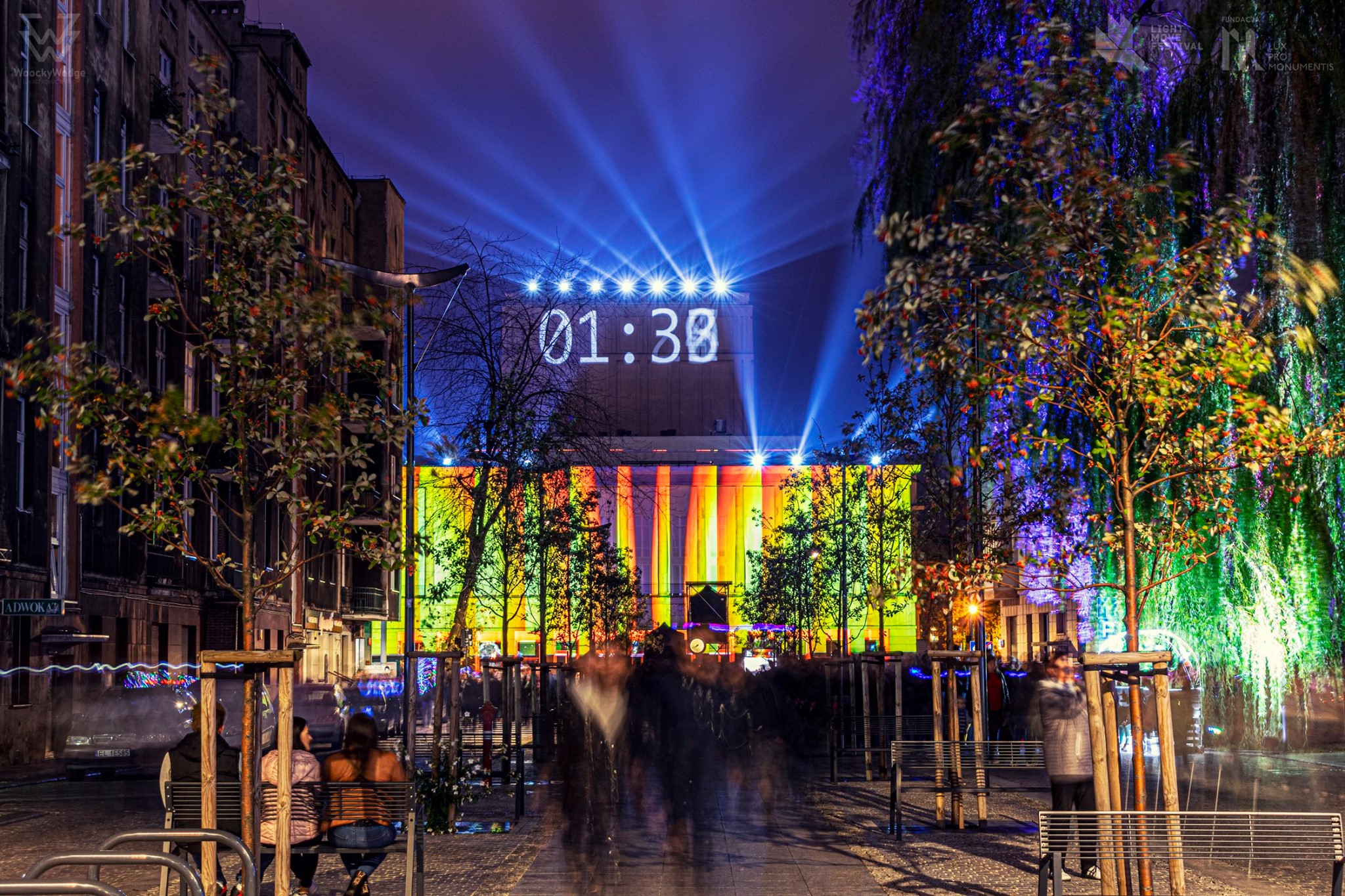 Founded by Beata Konieczniak and Norbert Wasserfurth-Grzybowski, the event has rapidly evolved to become one of the city’s calling cards.Light Move Festival/Facebook

From this year’s attractions, installations number a “hugging space”, an interactive object that senses and responds to hugs, a “cosmic wave” comprised of several hundred vertical lines woven with white yarn and a hypnotic, 30-metre long light bridge whose “shimmering path” immerses all who tread it into an introspective world.

Yet these represent the tip of the iceberg. Of the other assorted oddities, the “smallest drum kit in the world” has been designed to generate waves of light whilst a bench has been re-imagined as an astronaut’s cockpit, offering those that sit on it the chance to view “stars, planets and alien civilizations”. 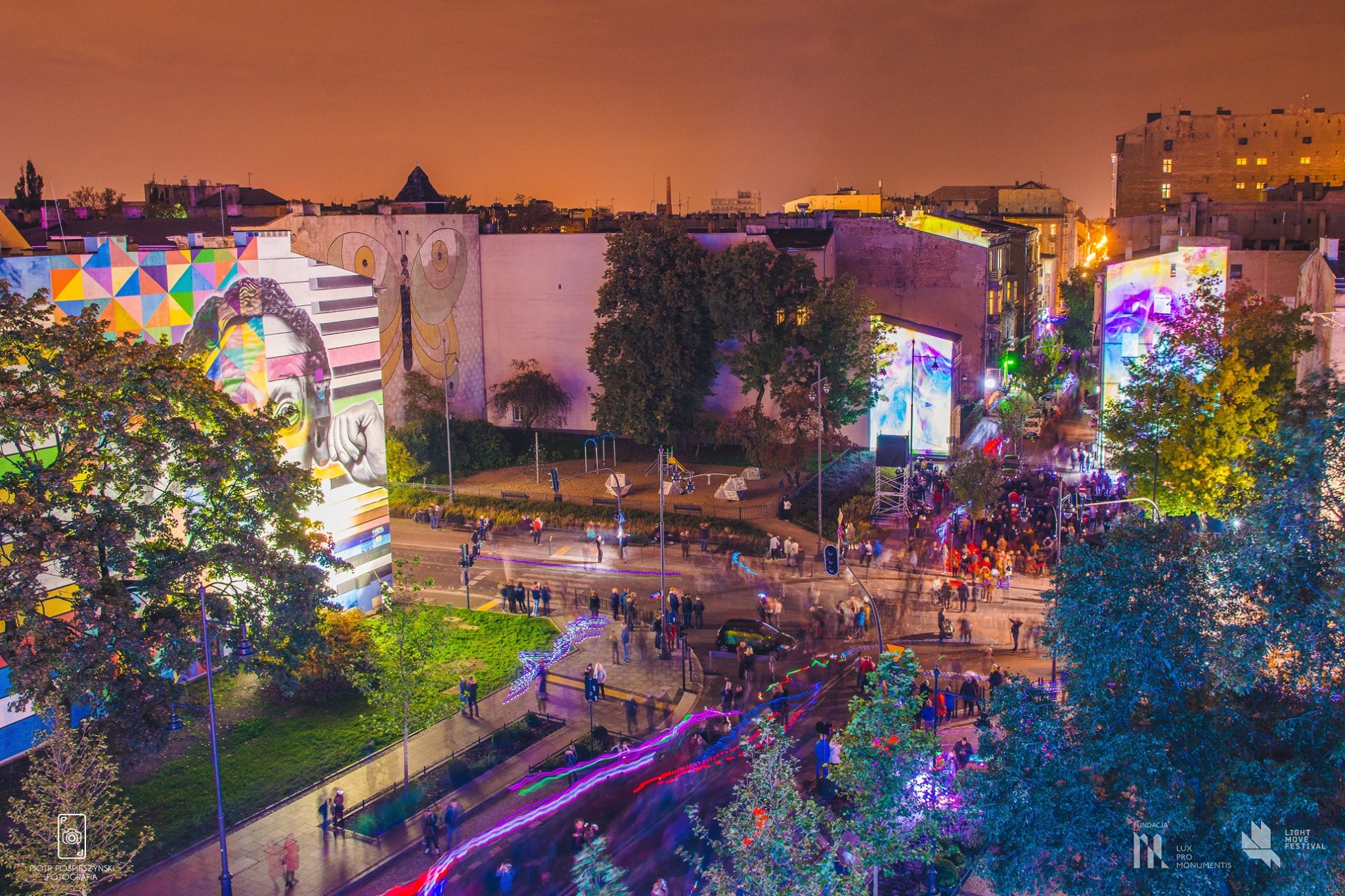 Now in its ninth year the festival brings in about 700,000 visitors.Light Move Festival/Facebook

Simultaneously humorous but unsettling, yet another ordinary object, a tree, has been superimposed with a series of digitally-created portraits that seemingly change expression when the wind blows and the leaves rustle.

Naturally, however, it is the XXL projects that have caught the most attention and established the festival as a world-class event. 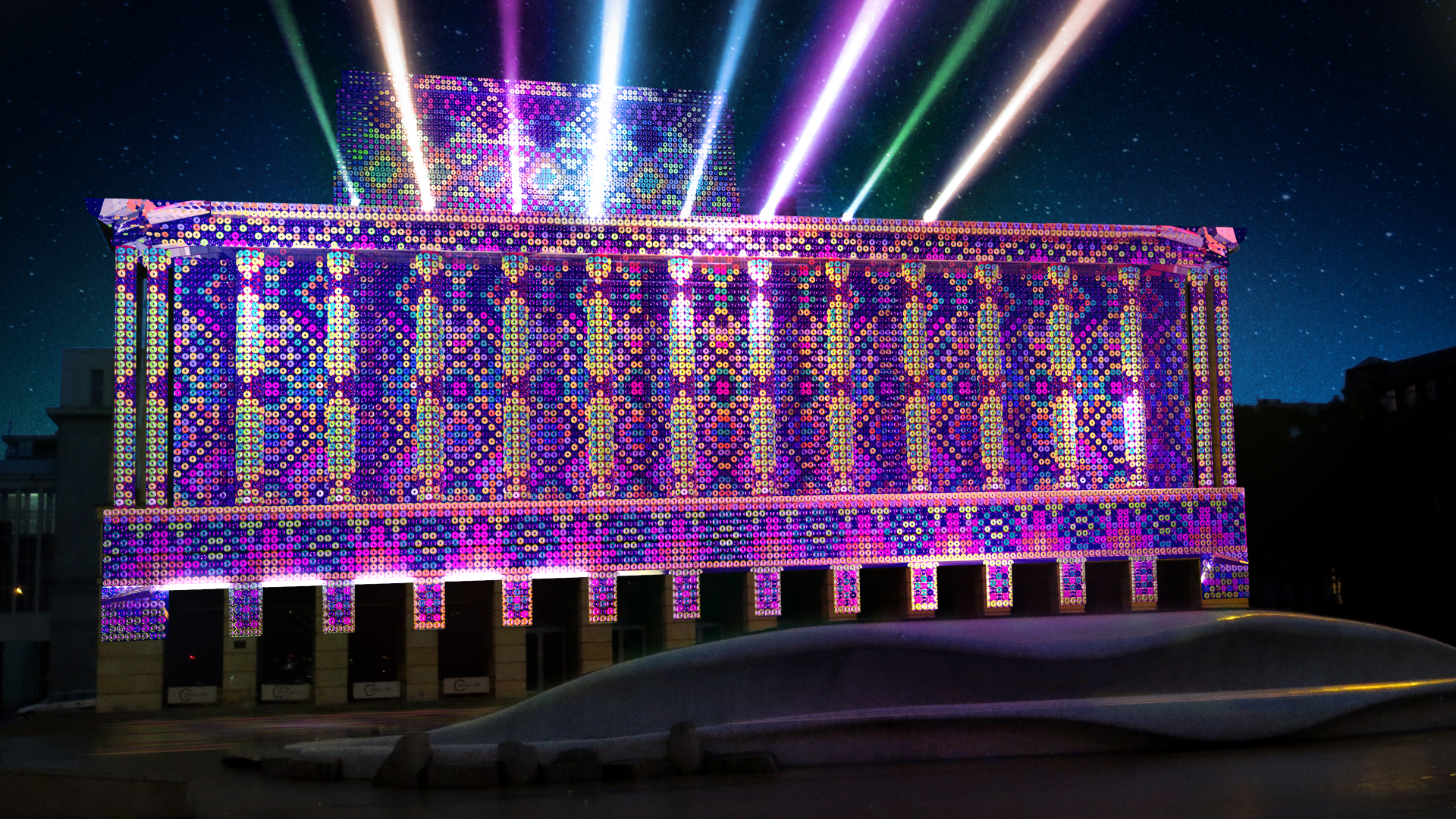 It is the XXL projects that have caught the most attention and established the festival as a world-class event. www.lmf.com.pl

For the duration of the weekend, the neo-Byzantine, 19th century Aleksander Nevsky Cathedral will be the canvas for “Keys of Light”. Authored by the Dutch collective Mr. Beam, the façade shifts colour with each touch of a piano key, while The Grand Theatre will glimmer to motifs from operatic classics courtesy of Pedro Narvaez.

The city’s legendary high street, ul. Piotrkowska, has also played a key role, with its patchwork mix of tall, pre-war tenements cast in stunning LED illuminations for the weekend amplifying the party atmosphere yet further.

In spite of this, the organisational strategy is such that it is other, often lesser-known sections of the city that have been purposefully highlighted. 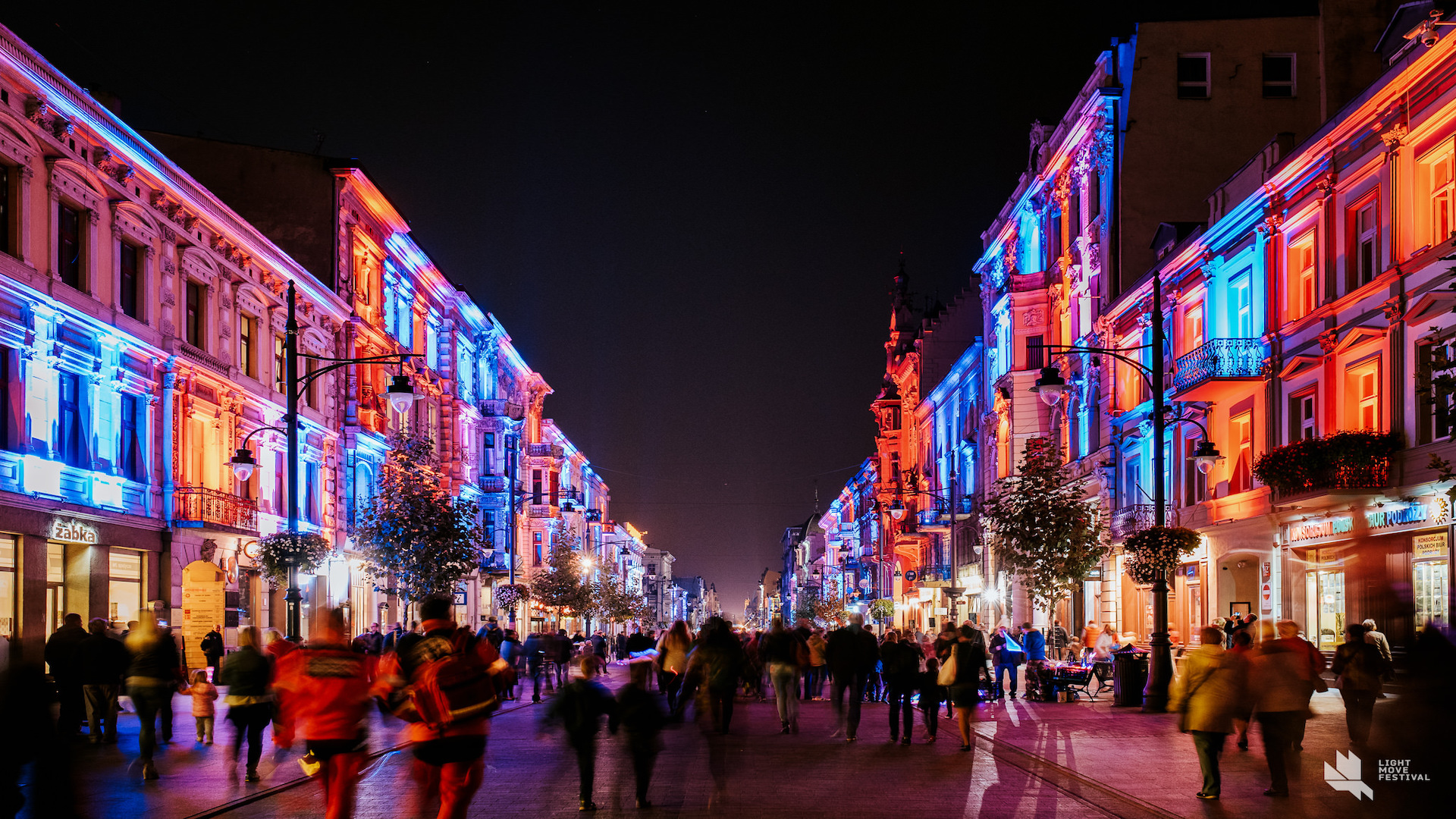 The lights just add to the party atmosphere on Piotrowska, the city’s main drag. www.lmf.com.pl

“We don’t just want to focus on Piotrkwowska and the standard tourist hotspots,” says Katarzyna Jędruszek. “In the past, for example, we helped reinvent Park Staromiejski, a place that hasn’t always had the best reputation at night. This year, we’ve tried to highlight what people are calling ‘the new centre of Łódź’. We want to show the full potential of the rest of the city.”

This, many would argue, has already been achieved with the festival becoming a brand in its own right, fulfilling a role that’s almost ambassadorial in its scope. 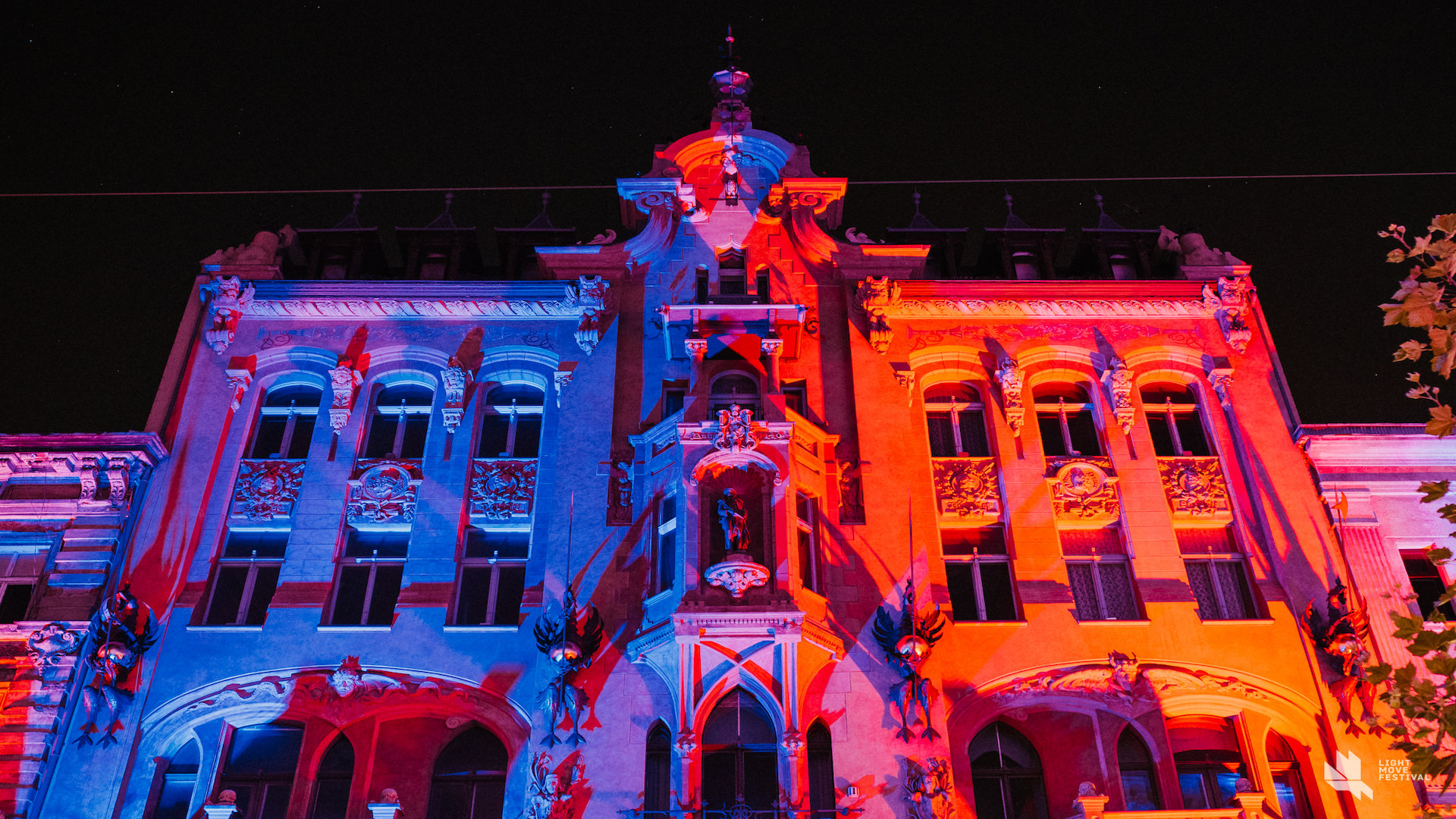 The illuminations put the city’s architecture in the spotlight.  www.lmf.com.pl

“Definitely it’s a great brand for the city to be associated with,” says Katarzyna. “The local film industry is already famous, but there’s so much more to Łódź than that alone – I think this festival shows that. More importantly, it presents the city as an open, welcoming, colourful place. Further, it’s not just a cultural event, but a social one that brings people of all backgrounds together.”

A vehicle of creative energy and social cohesion, expect this festival to grow yet more in the years that follow.