One of Warsaw’s holiest symbols and one of the most precious monuments in the city is undergoing conservation for the first time in 60 years.

The legendary Baryczkowski Crucifix, which has hung in Warsaw’s John the Baptist Cathedral since the 16th century and has accompanied Warsaw through its turbulent history, has been moved temporarily next door to the Archdiocese Museum where it will be carefully restored.

The life-sized figure of Christ on the cross weighing around 150 kilograms is an object of cult for the Warsaw faithful after having survived every catastrophe to beset the capital. 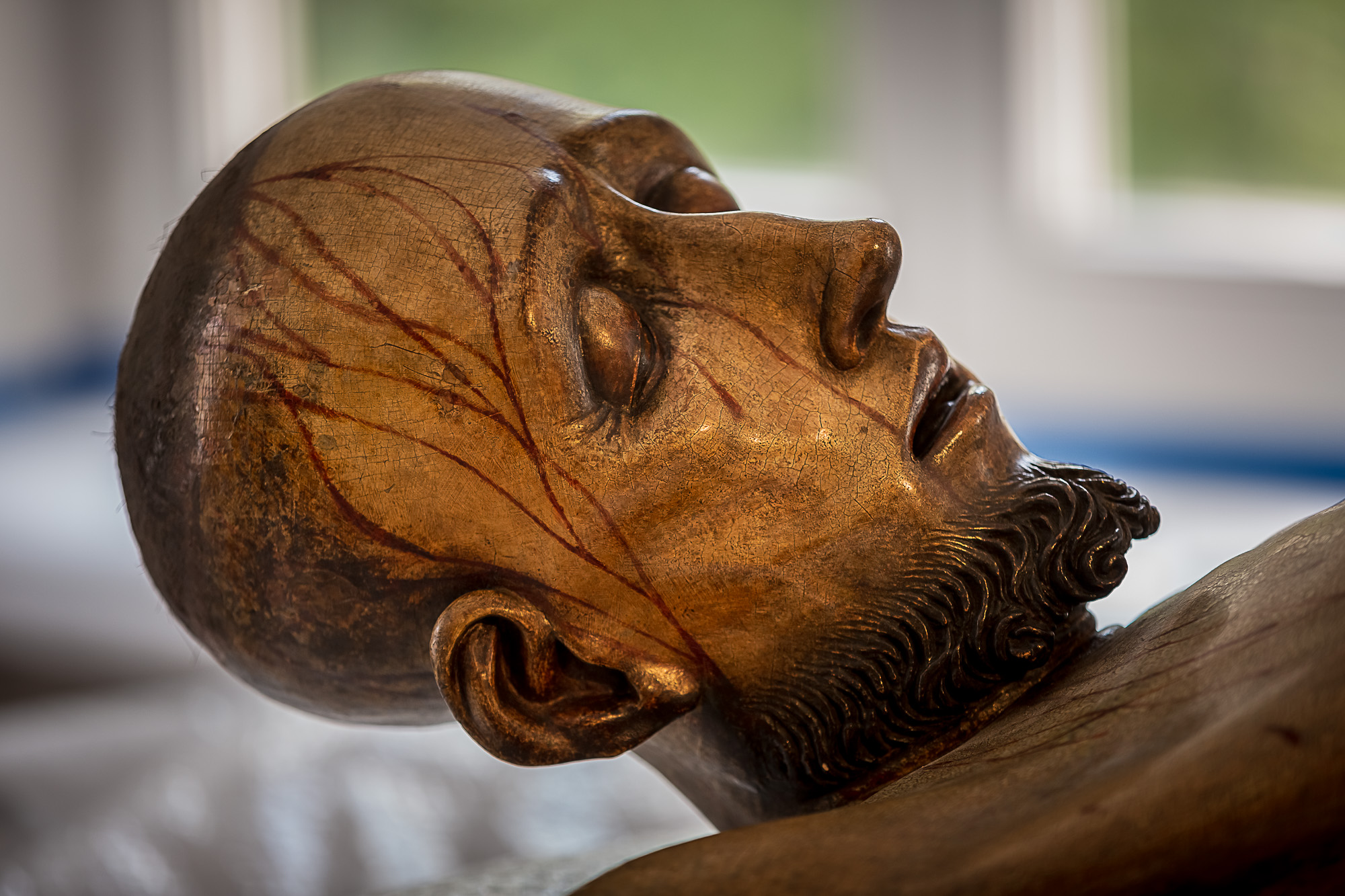 The precise origins of the crucifix are murky; however, it is believed that it was made in Nuremburg just before being taken to Warsaw in 1525.Kalbar/TFN

The crucifix survived two fires in the church in 1598 and 1607 and the collapse of the vault 1602. It avoided being plundered by the Swedes in 1655-60 and escaped damage when the Cathedral was struck by bombs in September 1939.

Miraculously, the crucifix emerged intact though badly burned when the Basilica was raised to the ground during the Warsaw Uprising.

Aware of its spiritual power, the figure with an expressive face full of pain and black raven hair has been venerated by Poland’s rulers over the centuries. 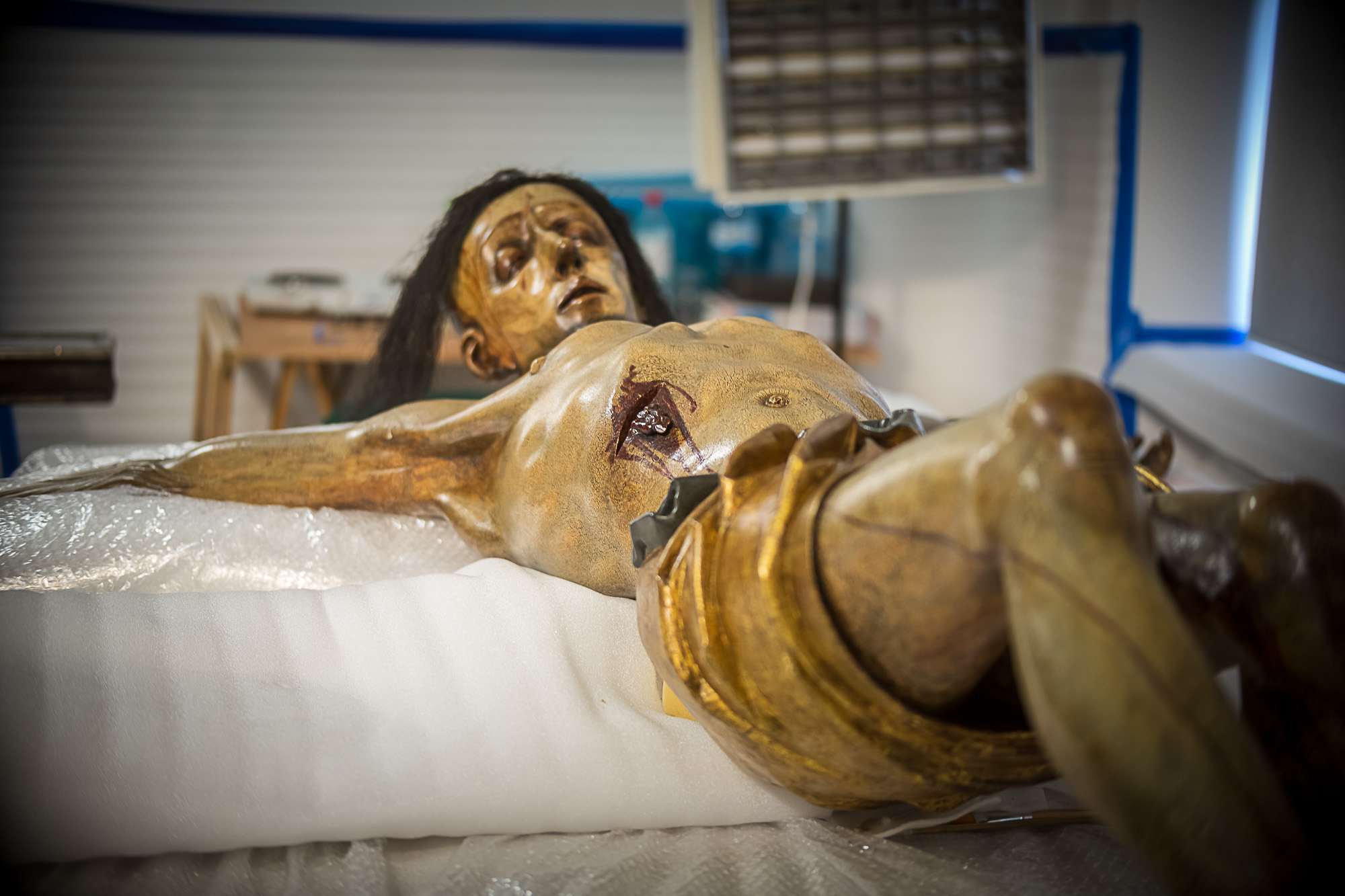 The figure of Christ on the cross weighs in at 150 kilograms.Kalbar/TFN

At the foot of the cross, services were held at the beginning of sessions that lead to the famous May 3 Constitution.

John Paul II prayed before it during his first apostolic visit in 1979 and in 2006 Benedict XVI bent the knee. 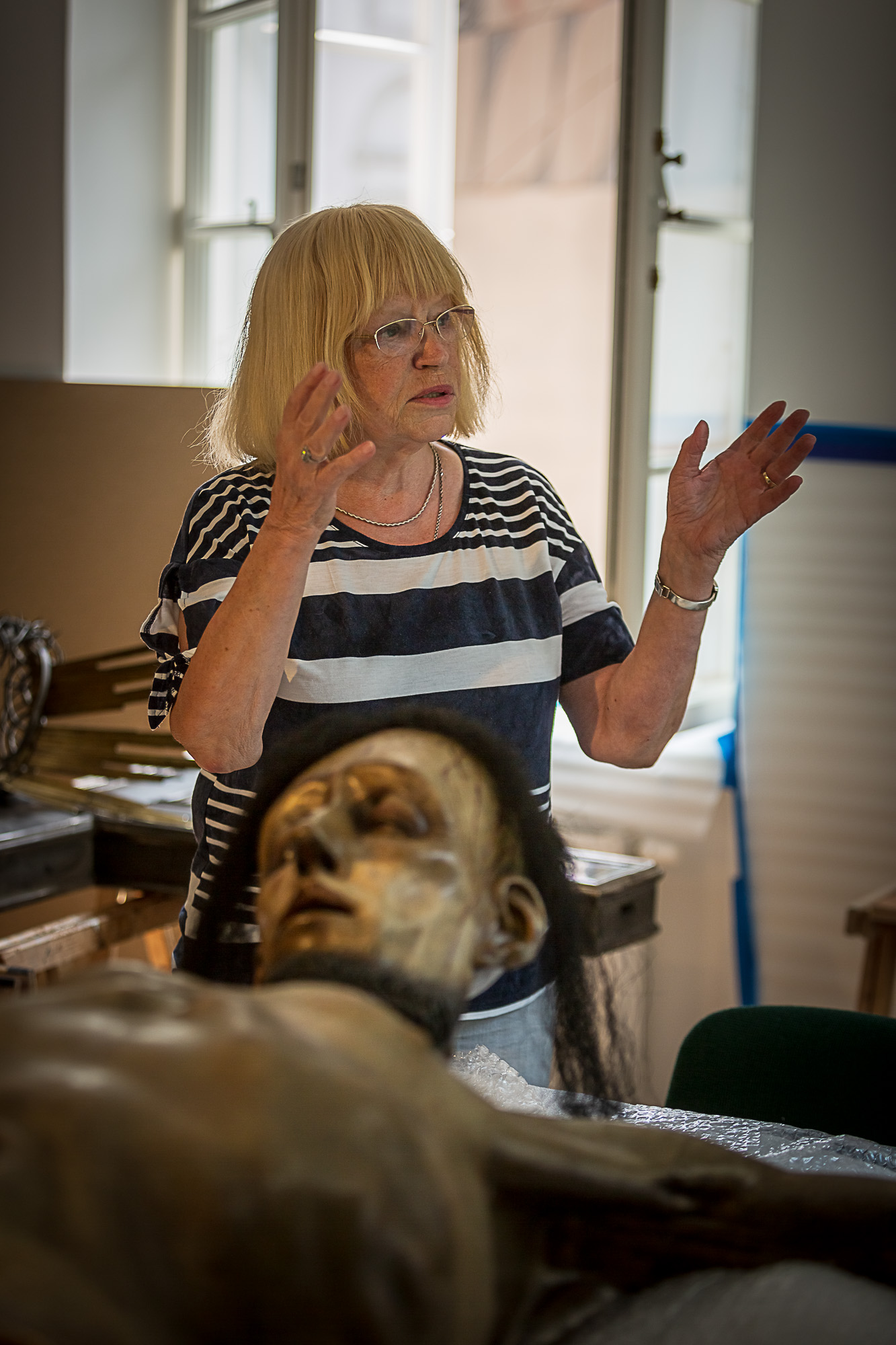 The last time the crucifix was conserved was in the late 1950s when techniques were more invasive and proper materials in short supply, so it is now much in need of care and attention.

“The feet are very badly preserved because over the years they have been touched, held and kissed by the faithful,” she added. 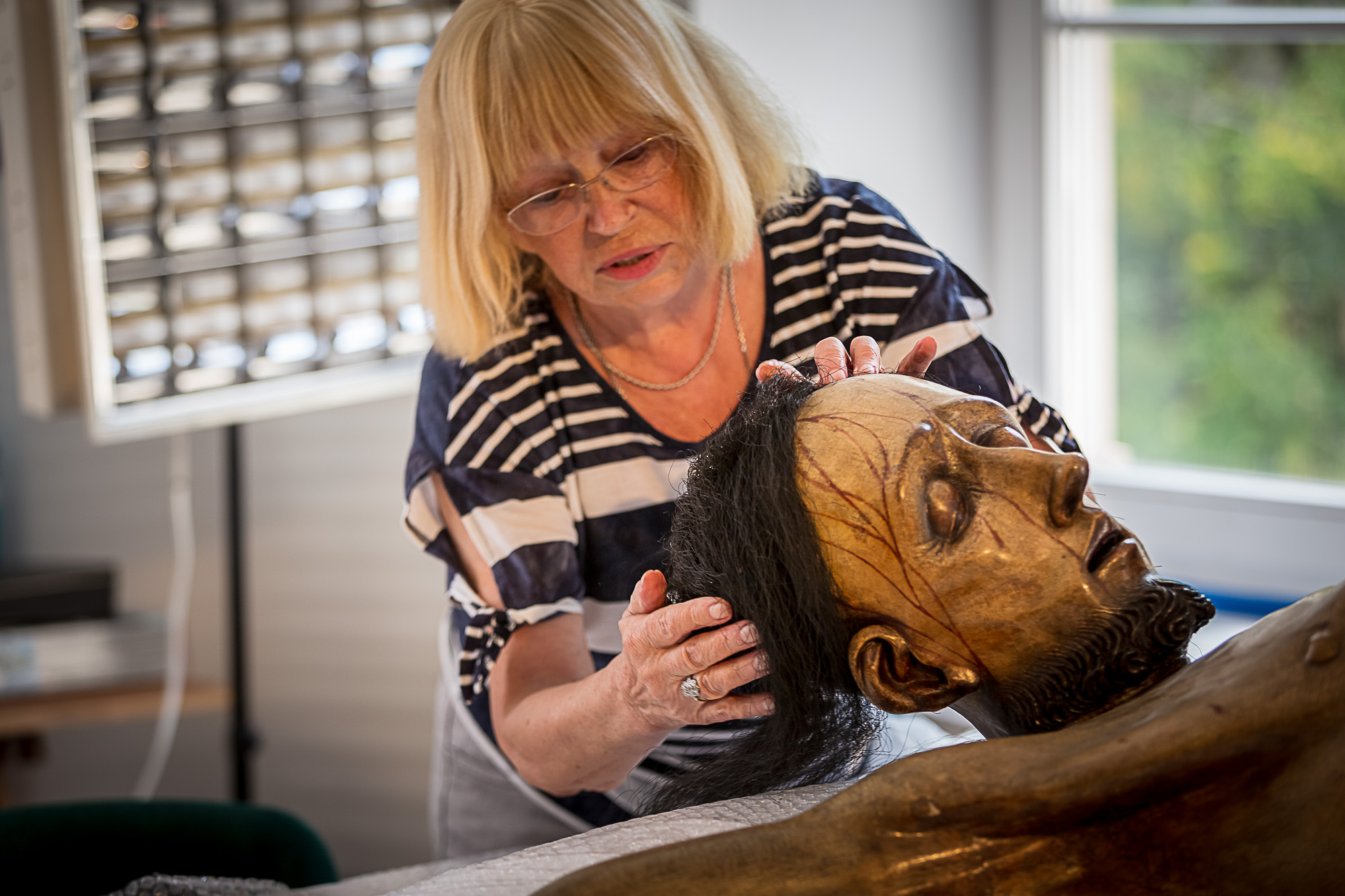 The hair that Christ has been wearing is makeshift, made from horsehair and dates back to the Uprising.Kalbar/TFN

Church bosses are keen that the crucifix should not look too new after conservation so as not to upset those who come to the Basilica regularly to pray before it. However, one visible improvement will be a new wig that will adorn the late-medieval sculpture.

“The hair that Christ has been wearing is makeshift and made from horsehair. It was given to him shortly after the uprising,” Lubryczyńska explained.

“Makeshift solutions can often last for a long time as people get used to them. The hair that had been glued on came off quite easily when we took a closer look. A new set of hair has already been made by a wig maker,” she added. 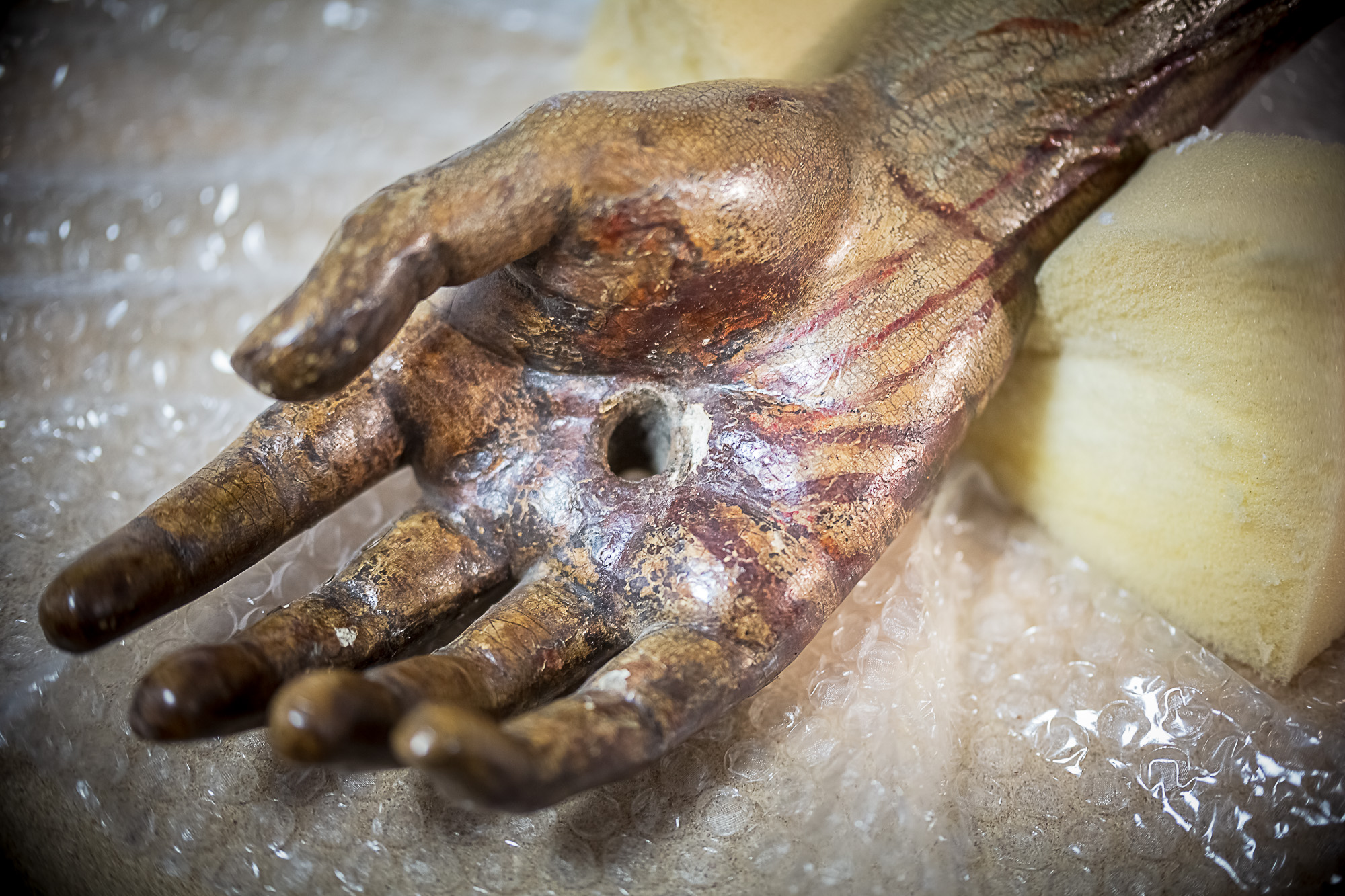 John Paul II prayed before it during his first apostolic visit in 1979.Kalbar/TFN

The new hair will be human, though it is not known who the donor is. “It’s not made from European hair because European hair is not durable and also because Jesus was not a European. It is probably from India,” she stated.

The precise origins of the crucifix are murky; however, it is believed that it was made in Nuremburg just before being taken to Warsaw in 1525.

According to legend, the Warsaw merchant Jerzy Baryczka secretly transported the crucifix from Nuremberg, saving it from the destructive fury of mobs that had reached boiling point amid the passions of the Reformation. 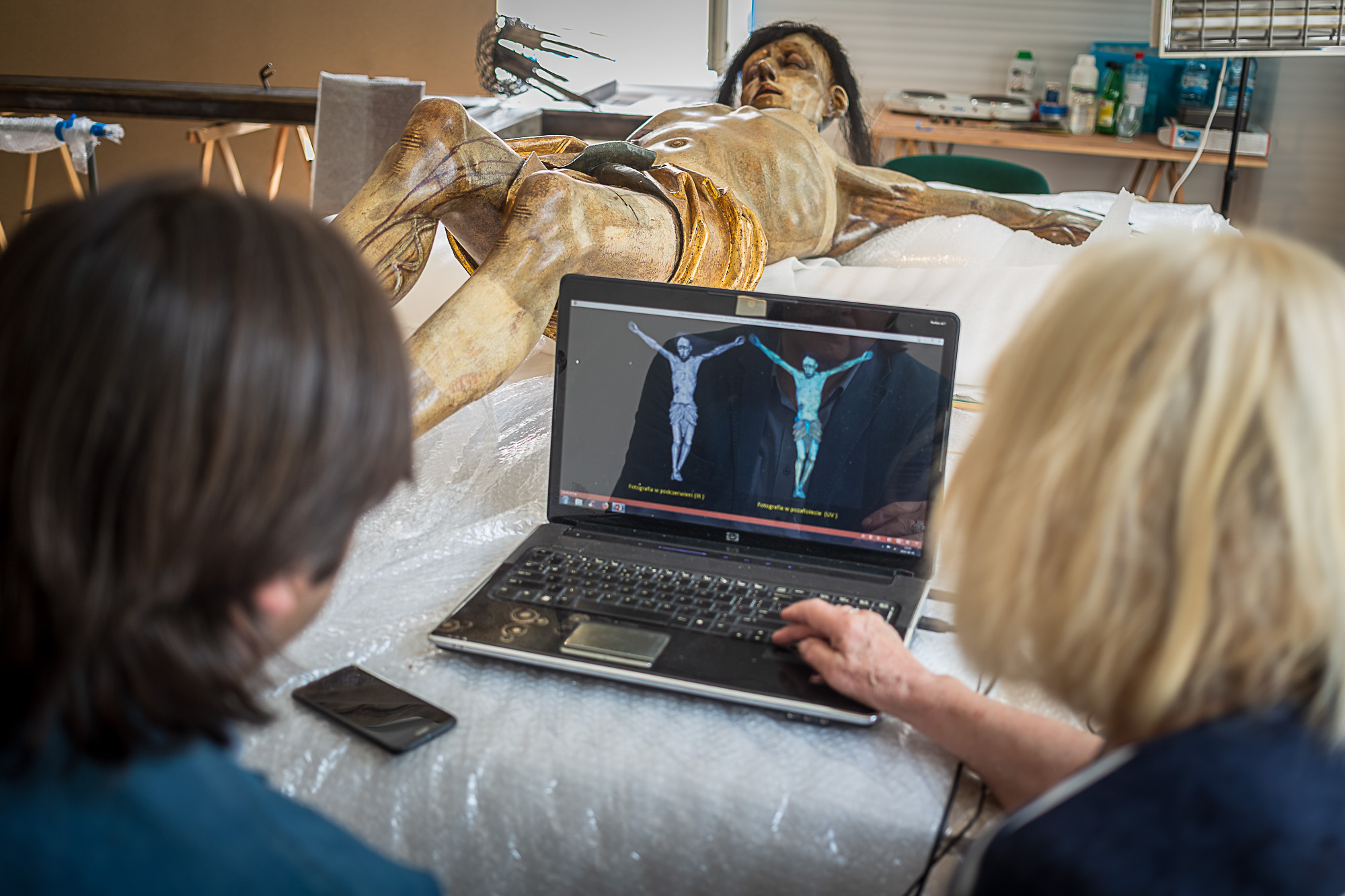 The last time the crucifix was conserved was in the late 1950s.Kalbar/TFN

Another legend is connected with the hair of Christ. It says that when the crucifix was still in pre-Reformation Nuremberg, the hair on the head of the figure grew as if it were real human hair, but during the Reformation it began to dry and fall out.

After being brought to Warsaw, the iconic figure’s hair once again grew normally and was cut by a virgin every year on Good Friday using gold scissors. This happened until one year the task was given to Jerzy Baryczka's great-granddaughter. Unfortunately, the girl concealed the fact that she wasn’t a virgin and Christ’s hair stopped growing.

The most miraculous episode in the crucifix’s venerable history came during the Warsaw Uprising in 1944. After heavy German bombing, the Basilica eventually succumbed to the onslaught and crumbled to the ground, leaving the entire building and almost all of its interiors in a pile of rubble and dust. 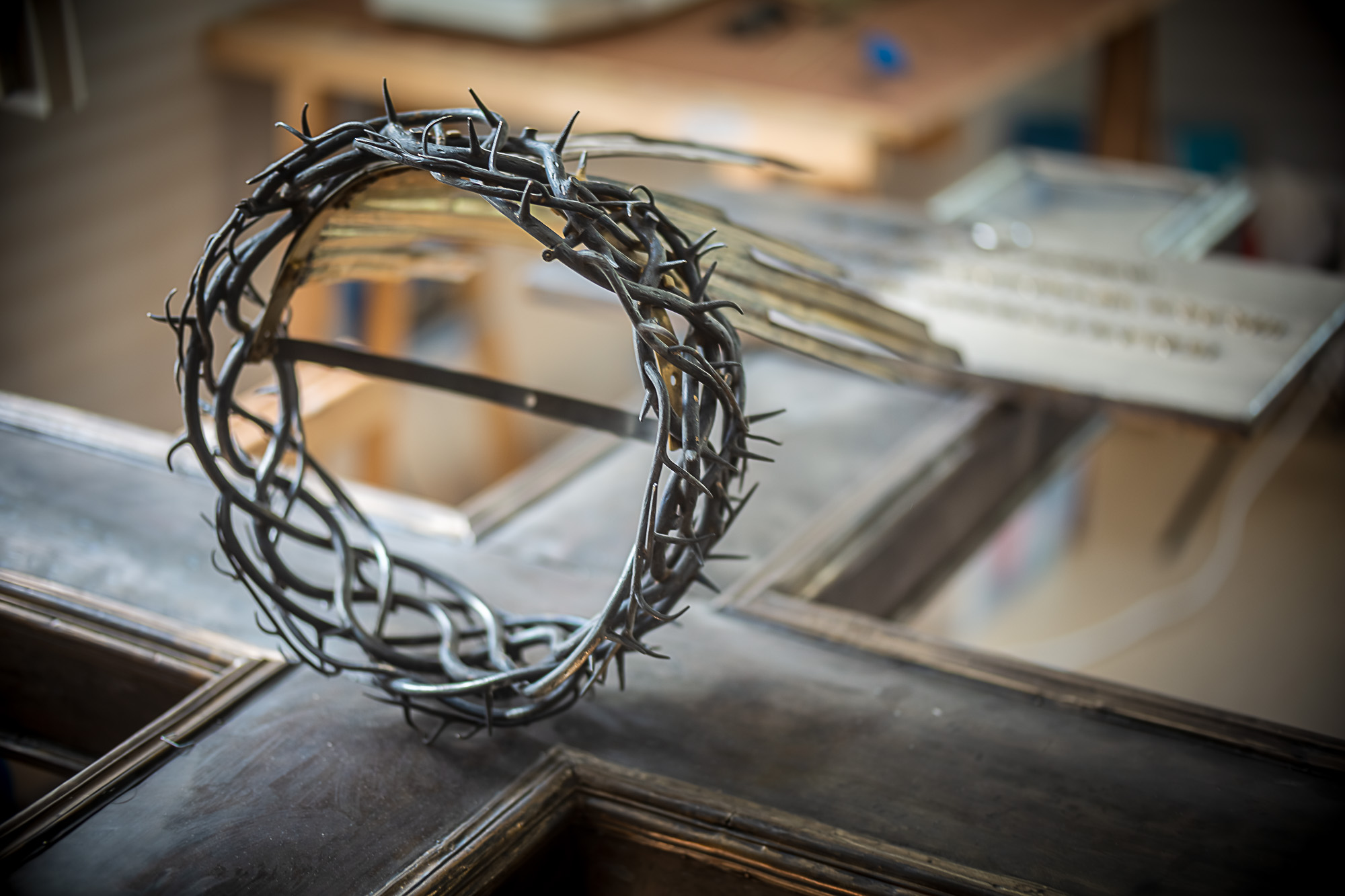 Along with the war, the figure survived two fires in the church and the collapse of the vault 1602.Kalbar/TFN

The only structure to remain standing, to the left of the main altar, was the Baryczka Chapel, the thick stone walls of which offered sufficient protection to its holy resident.

Jesuit Father Wacław Karłowicz along with two female medics moved it to the basement of St. Jacek's Church in the New Town, which was being used as a field hospital, and laid it among wounded insurgents, covering it with a shroud.

Another priest, not knowing about the hidden figure, convinced in the darkness that he was dealing with a dead insurgent, anointed Christ’s forehead to equip him for his final journey. 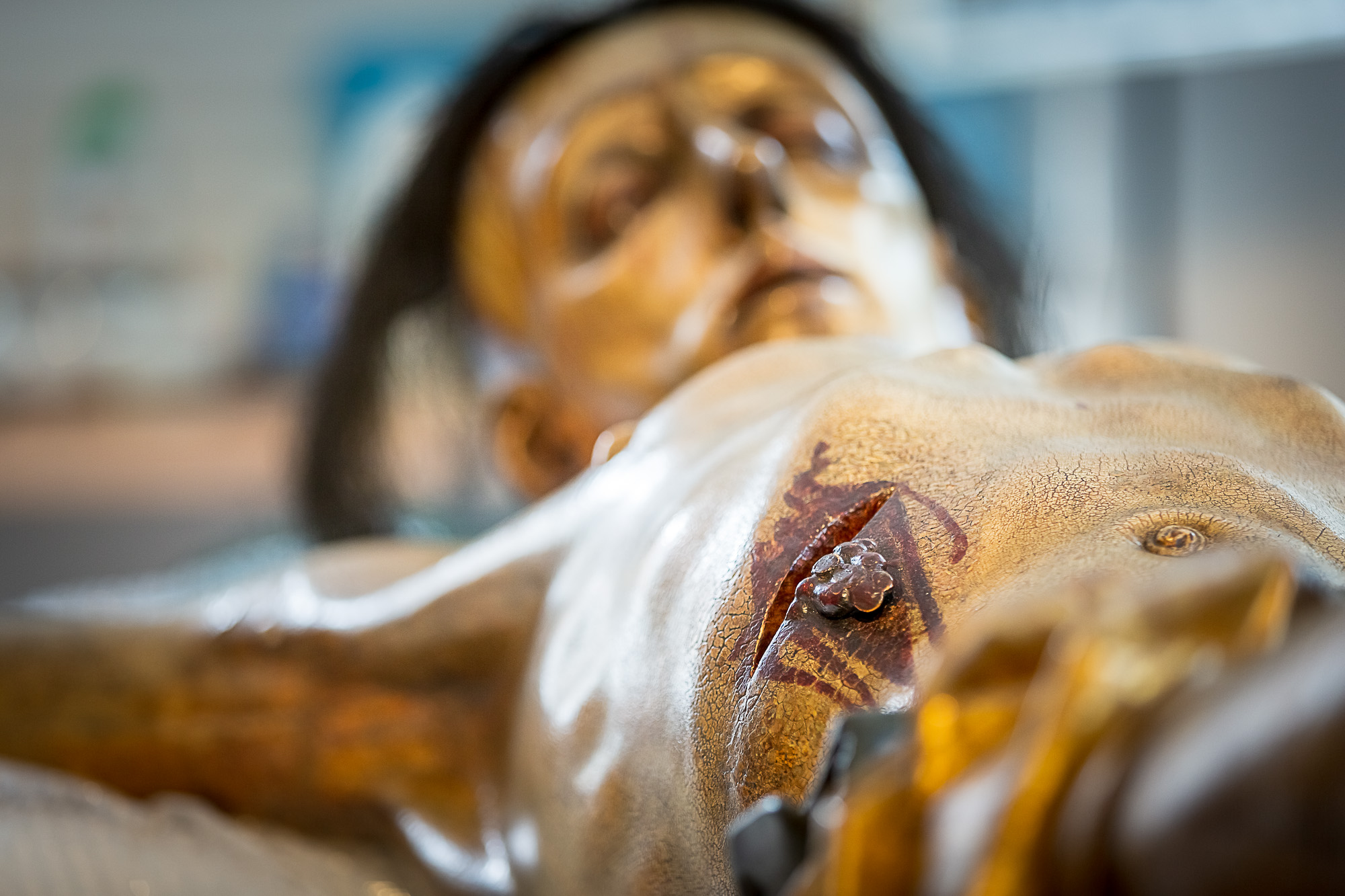 To this day, the Baryczkowski Crucifix remains an object of worship for the devout and is still famous for its graces.Kalbar/TFN

After the war, the crucifix was moved for several years to the Carmelite Church on Krakowskie Przedmieście, which survived the war, and from there it returned to the rebuilt St. John’s Basilica on 21 March 1948.

To this day, the Baryczkowski Crucifix remains an object of worship for the devout and is still famous for its graces.