The meteoric pace of Poland’s food revolution has been well-documented since first breaking out little less than 10 years ago. Yet whilst the spotlight has tended to fall on more fashionable concepts and cuisines, it is perhaps the evolution of the domestic institution that is the humble milk bar that arguably presents the best measure of how far the country has come in embracing new mindsets and models.

In this regard, the country bristles with examples, not least in the capital where venues established in the 50s have been freshened up with retro neon dazzle and recalibrated for the demands of the 21st century. However, it is Kraków that can best stake a claim as being the first to climb the fire step and charge into the brave new world that many milk bars now inhabit. 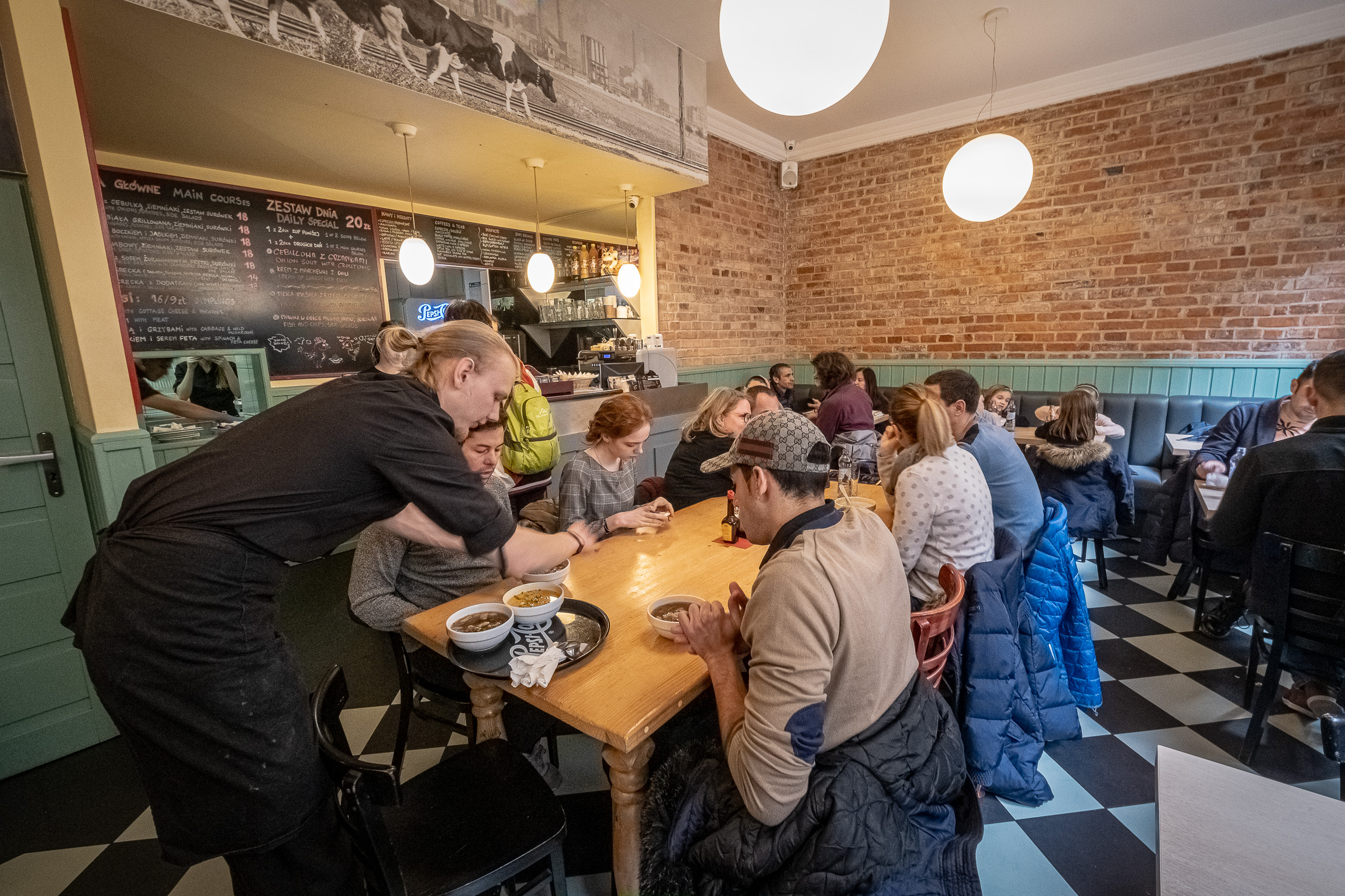 The bar has been featured in The Guardian and The Spectator.Kalbar/TFN

Yet it was not a Pole that sowed the seeds for change, rather an Irishman.

“I’d been working as a chef in London,” explains Dublin-born Tom Naughton, “and basically came to Poland at the start of the millennium to find a change. I was teaching English for a few years but fancied getting into the milk bar game – I wrote to the milk bar association round about 2001 looking to find out more, maybe make an investment, but no-one bothered getting back in touch.”

Putting the idea to the back of his mind, Naughton instead opened a bar, Nic Nowego which quickly became ensconced in folklore for its long, blurry nights. 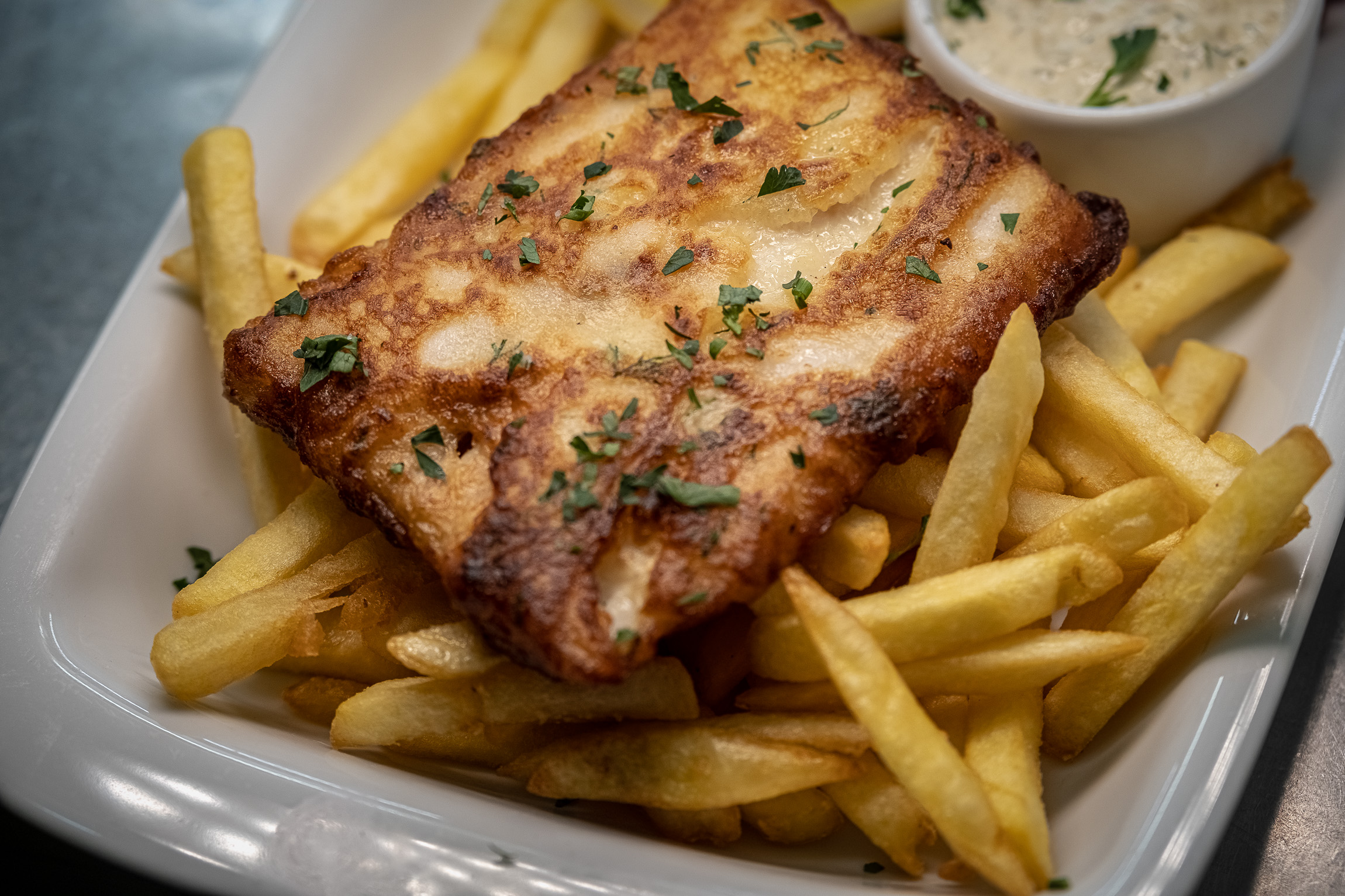 Tomasza concentrates on providing good food at a reasonable price.Kalbar/TFN

“It was never meant to be an Irish bar,” he tells TFN, “but I guess that’s what it became. That said, I was determined to get away from the over-the-top ‘paddy whackery’ of other Irish-owned ventures and I think we succeeded.”

Despite its popularity, disputes with the neighbours and a lack of clarity from the landlord forced Naughton’s hand.

“My business partner Monika and I made the decision to close and, whilst thinking of a Plan B we heard of a milk bar around the corner that was going up for auction. We won the bidding process and figured we’d run with the milk bar idea, only clean the place up, improve the service and lift the quality of the food – now, we’ve entered our ninth year of operations.” 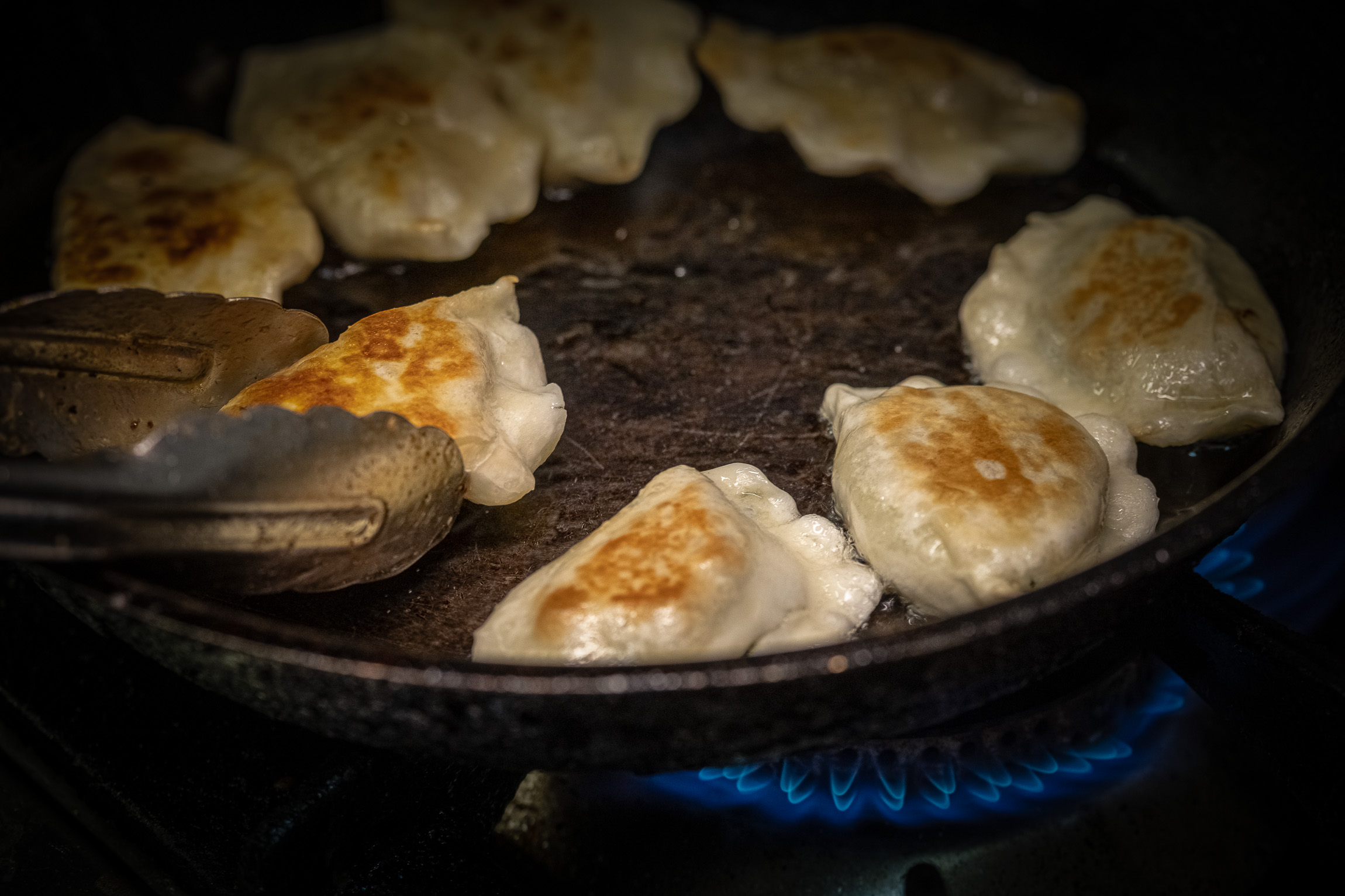 While old favourites such as pierogi feature on the menu, the bar has branched out and served up curry and Irish breakfasts.Kalbar/TFN

Whilst his strategy sounds simple, Naughton’s vision was seismic at the time and hauled the traditional bar mleczny from out of the past.

First thought to have been created in 1896 in Warsaw by a dairy farmer by the name of Stanisław Dłużewski, the original milk bar was established to serve as a platform for Dłużewski’s dairy goods – milk, kefir and cheese-based items were a forte, and meat was entirely overlooked. Proving a runaway hit, copycats mushroomed around partitioned Poland. 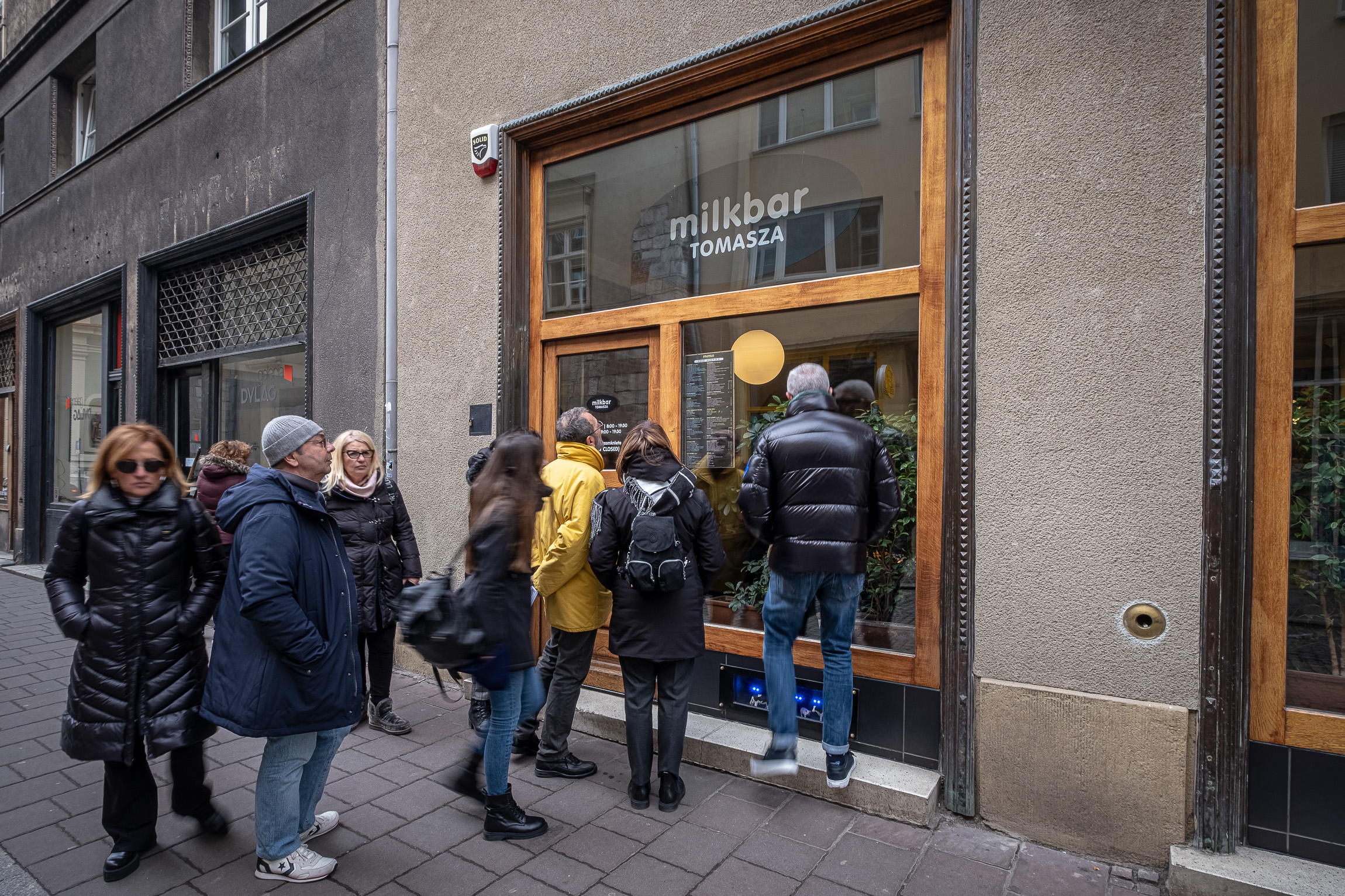 On a good day the restaurant can clear 700 covers.Kalbar/TFN

Known for their affordability, they continued to flourish in the inter-war years, particularly during the years of austerity that came with the global financial crisis. Yet it was during the communist PRL period that milk bars truly soared to become a nationwide phenomenon.

Frequented by the rank-and-file, and subsidized by the state, their simple food became a staple of Polish society. The political changes that came with the fall of the Iron Curtain ushered in a new gastronomic era for Poles, and milk bars soon became a dated reminder of the past: a by-word for noxious odours, faded aesthetics, gloomy service and sloppy food.

It was this that Naughton sought to change. 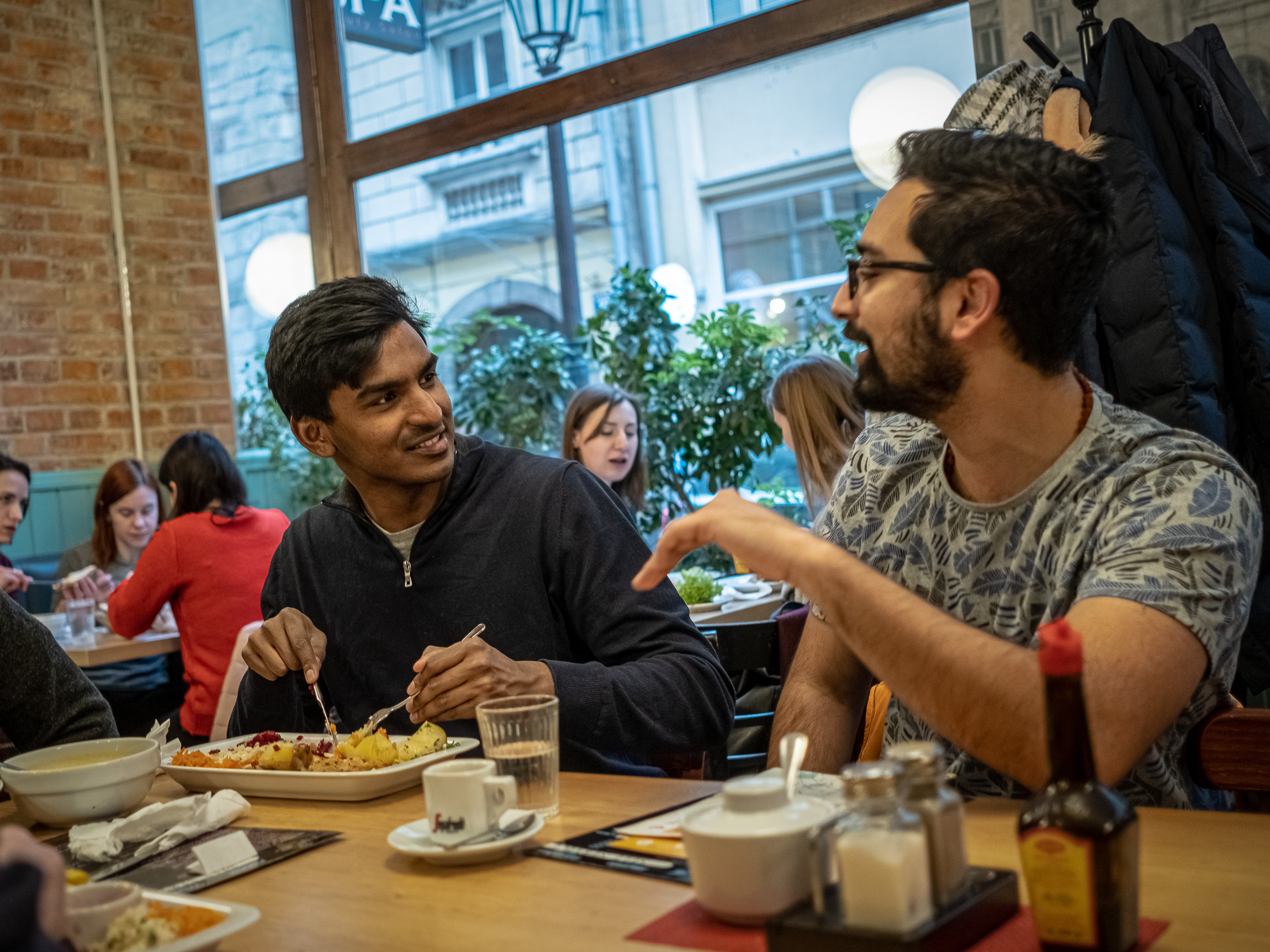 Naughton describing his custom as ranging from families and students to nuns and office workers.Kalbar/TFN

“It felt like people weren’t trying,” he says, “I just wanted to provide the basics that you’d expect as a regular punter: all I really wanted my place, Milk Bar Tomasza, to be was a place where you’d get a nice welcome and good food at a decent price. From there, things just fell into place.”

By no means was this easy, and Naughton soon found himself trading his perch at the counter for a stove-side position. 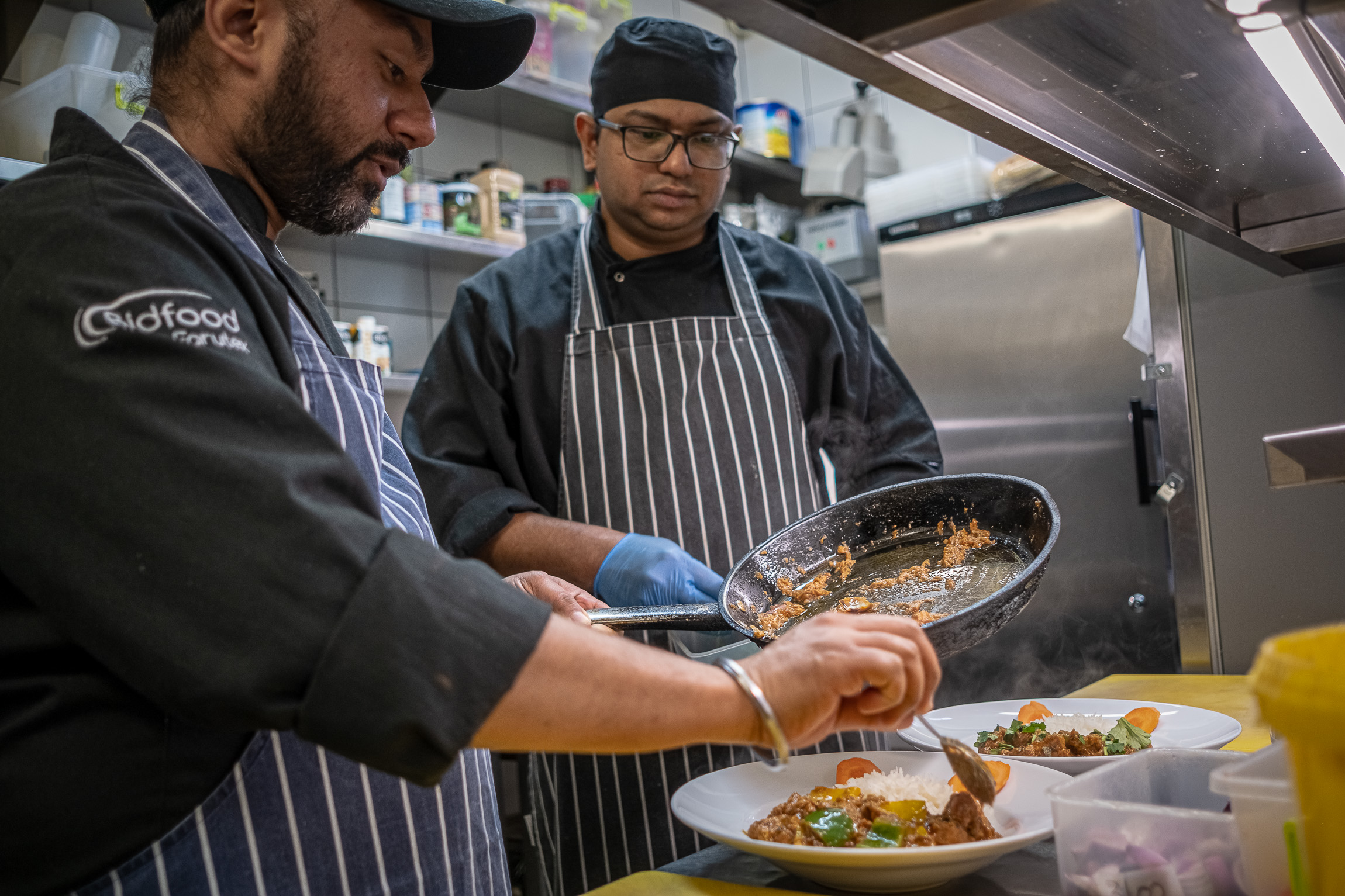 Chefs at work at Tomasza.Kalbar/TFN

“After 10 years with a bar I was used to people doing the work for me,” he says, “but I realized quite quickly that if I wanted the food to be up to the standard I was asking then I’d have to move to the back.

“It was tough. Pretty much all the staff walked out when I first decided to lead the kitchen myself, but that change needed to happen and I love being back there now – if you don’t put the time in, you can’t expect to receive anything back. It helps, of course, that I’ve got a good crew with me. That’s 90 percent of the battle. If you’re working with positive people you’re in a strong position to push to the next level.” 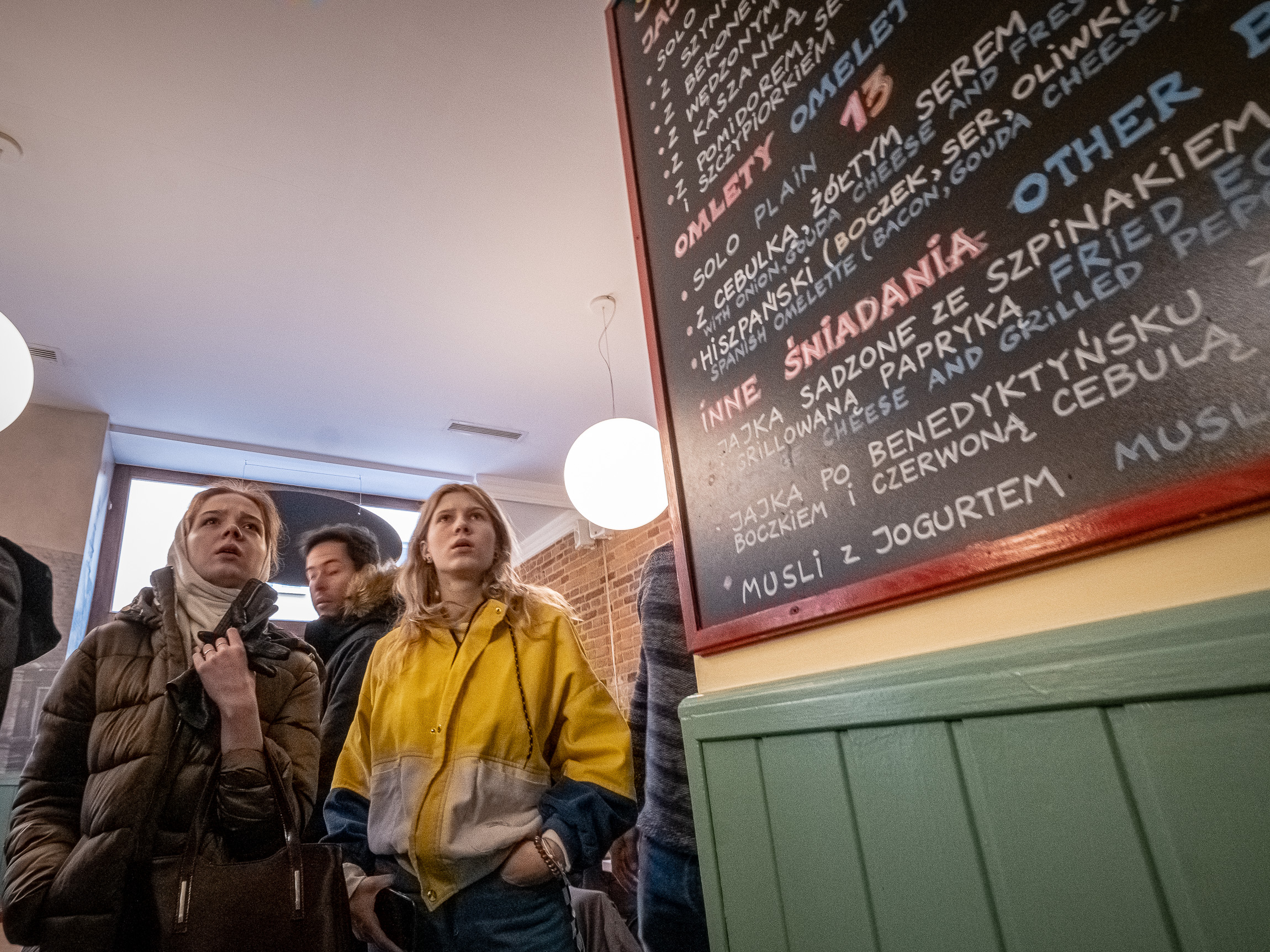 Naughton feels the enduring popularity of the milk bar lies in its fundamental simplicity.Kalbar/TFN

Flexibility has been key. Featured in media such as The Guardian and The Spectator, Naughton’s venue has raised eyebrows for including such surprises as all-day Irish breakfasts and, even, curry.

“I’ve got chefs from Ukraine, Nepal, etc., so why not,” he says. “Every now and again I’ll read comments online that accuse me of not being traditional enough but the way I see it, milk bars should be about good food at low prices. I like to think that’s what we do.”

Certainly, it’s born out by the numbers. At the height of summer, it’s not unknown for Milk Bar Tomasza to clear 700 covers daily. 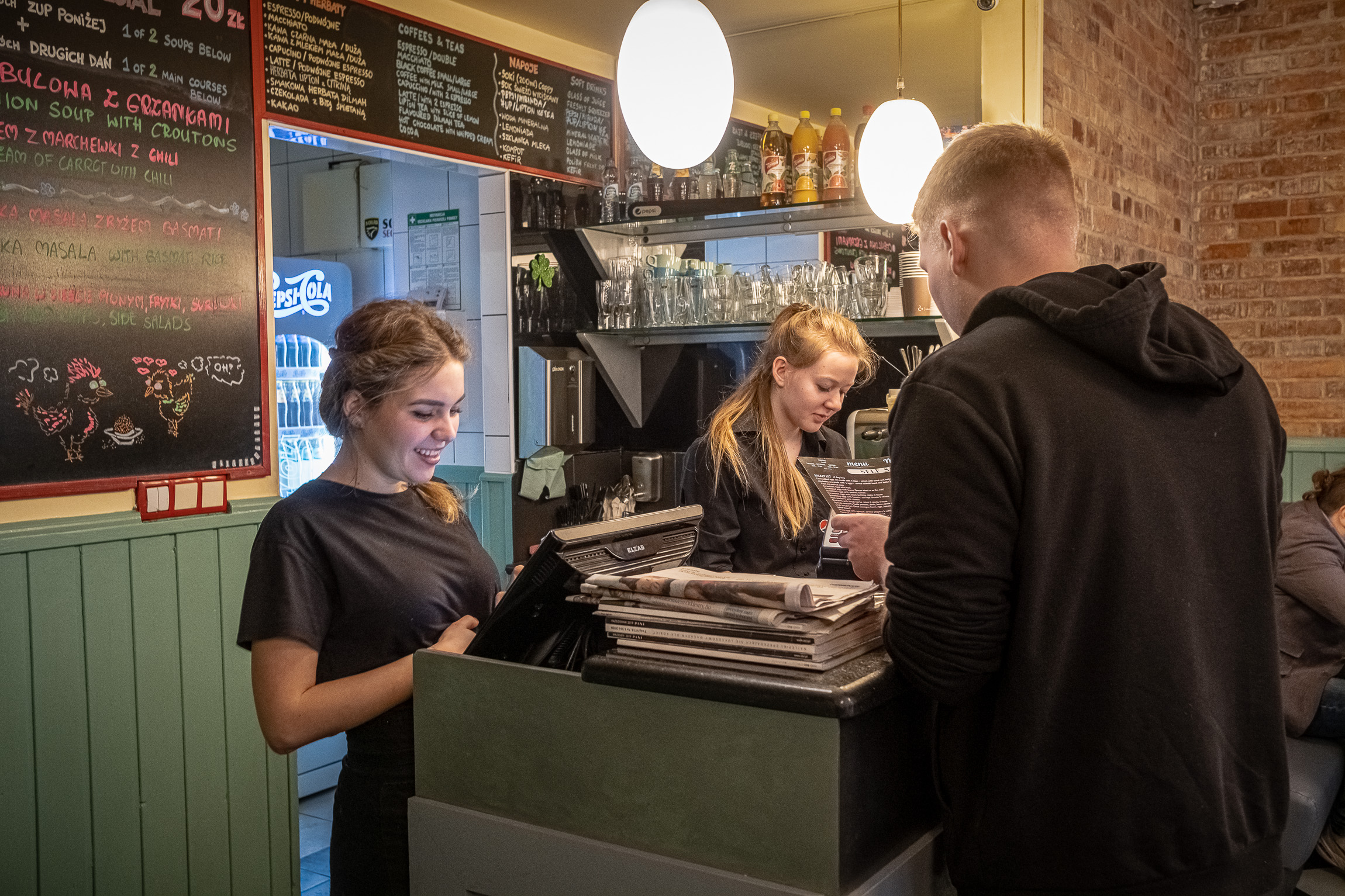 The milk bar will open again on May 24.Kalbar/TFN

The appeal has been universal, with Naughton describing his custom as ranging from families and students to nuns and office workers. “You name it,” he says. Largely, he feels the enduring popularity of the milk bar lies in its fundamental simplicity.

“There’s no hullabaloo to them, none of this fancy-pants stuff with wine lists and suchlike. I’ve always loved the atmosphere of the traditional London café or the old school American diner, and the milk bar is the Polish equivalent. There’s no song and dance to them, no ritual involved, you just sit down and enjoy eating.”

Scheduled to reopen tomorrow following the lockdown, Naughton is cautious but not alarmed about the challenges that lie immediately ahead. 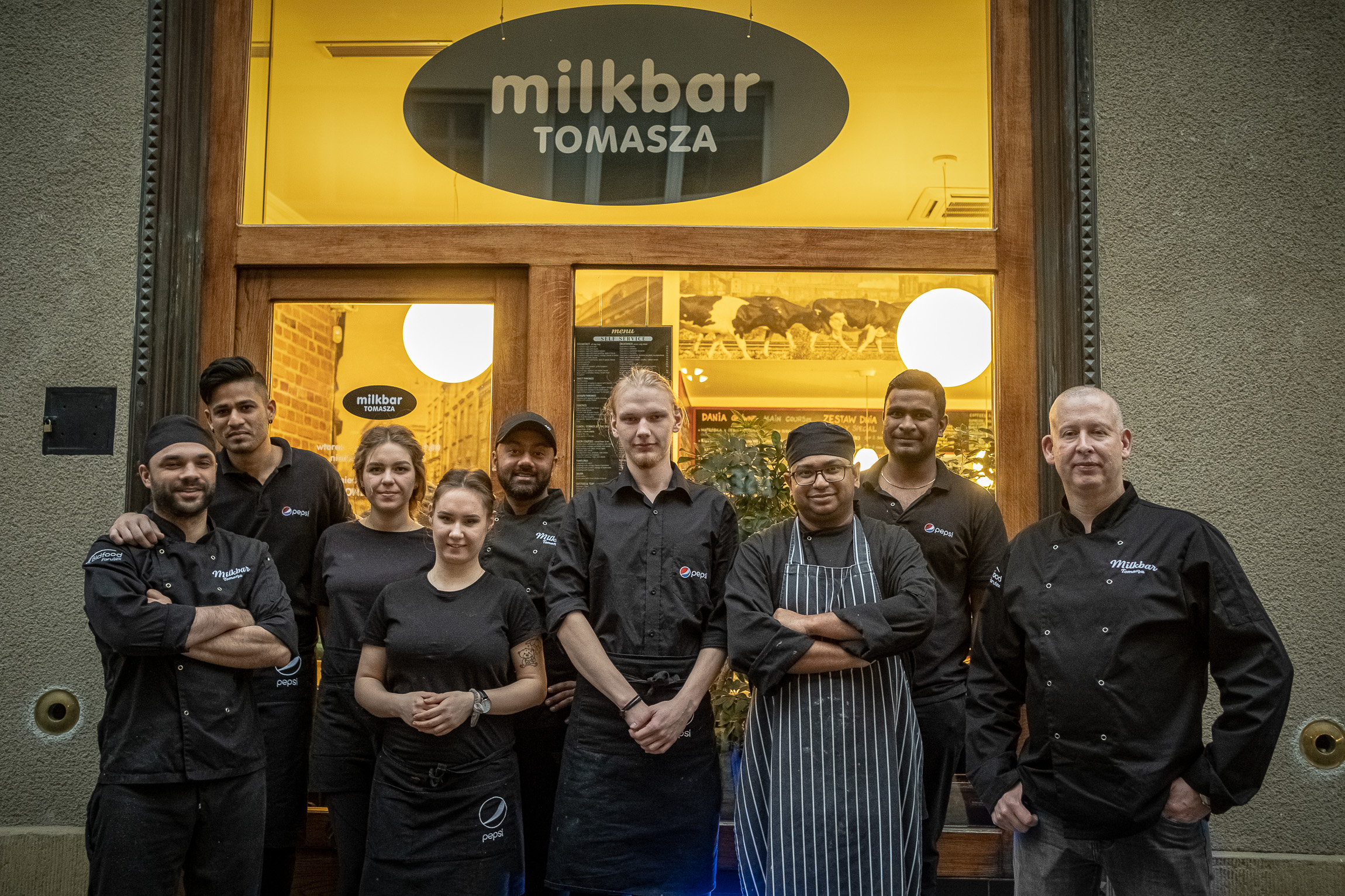 Naughton (far right) with staff: “It helps, of course, that I’ve got a good crew with me.”Kalbar/TFN

“From September till May about 80 percent of my guests are Polish,” he says, “and I maintain a good price to quality ratio. I think some other restaurants in the Old Town area though are going to struggle: we’ve got to be honest and recognize that tourism is pretty much finished this year so there’ll definitely be places that will find it tricky.”

Even with the restaurant industry facing big unknowns, Naughton is adamant that he has made the right decision in following his milk bar dream. If there are regrets, then these are hidden well.

“The bar was brilliant fun,” he says, “but after a while you grow tired of hearing the same stories from the same people all the time! It was time for a new chapter in my life, and the milk bar was it. More so, if there’s one thing I’ve found it’s that serving people food is ultimately far more rewarding than just giving them booze.”

This article was first published in May 2020.