Increasingly cited by the international travel press as one of Northern Europe’s most beautiful cities, an exhibition organized by the Museum of Gdańsk has brought into sharp focus the horror and devastation faced by the city in the aftermath of war.

Having finally fallen to the Red Army at the tail end of March, 1945, what was then the city of Danzig presented an apocalyptic sight of rubble and ruin. Smashed to smithereens during a brief but brutal siege, the departure of German troops heralded no respite. Hellbent on vengeance, Soviet troops embarked on a savage campaign of rape and plunder.

By the time the marauding units had been reigned in, it is said that only 38 houses in the whole of the city centre remained standing. Fires raged for a month, and in some instances till Autumn. Competing with Warsaw in terms of outright destruction, this once handsome city was rendered little more than a smoking heap of bricks. 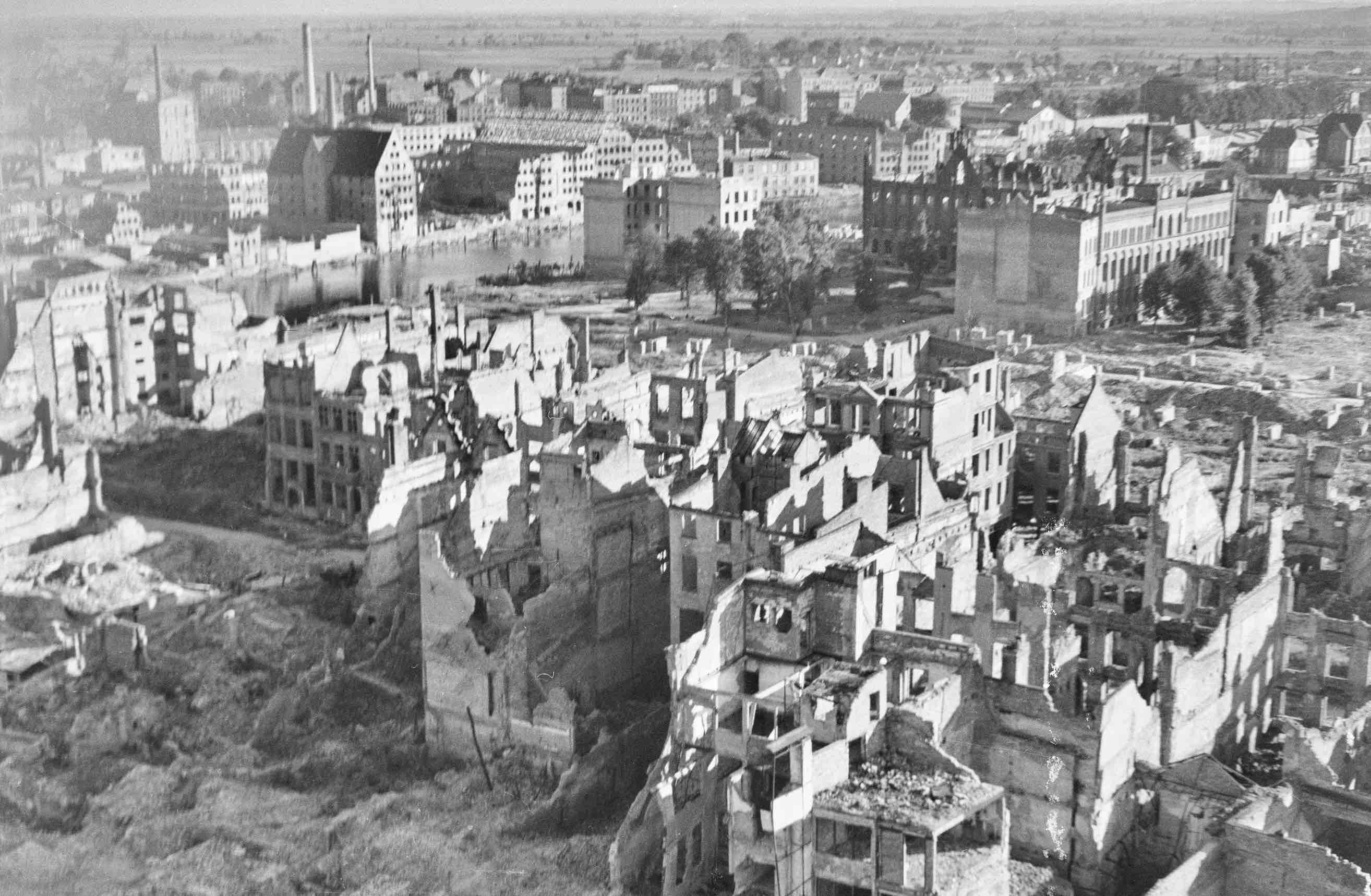 Speaking to TFN, Dr. Andrzej Gierszewski of the Museum of Gdańsk describes the importance of Lelewicz’s photographs as inestimable. “The images were briefly shown in the seventies, but thereafter they disappeared from our collection – only last year were we able to acquire them from his family.”Kazimierz Lelewicz/ Museum of Gdańsk 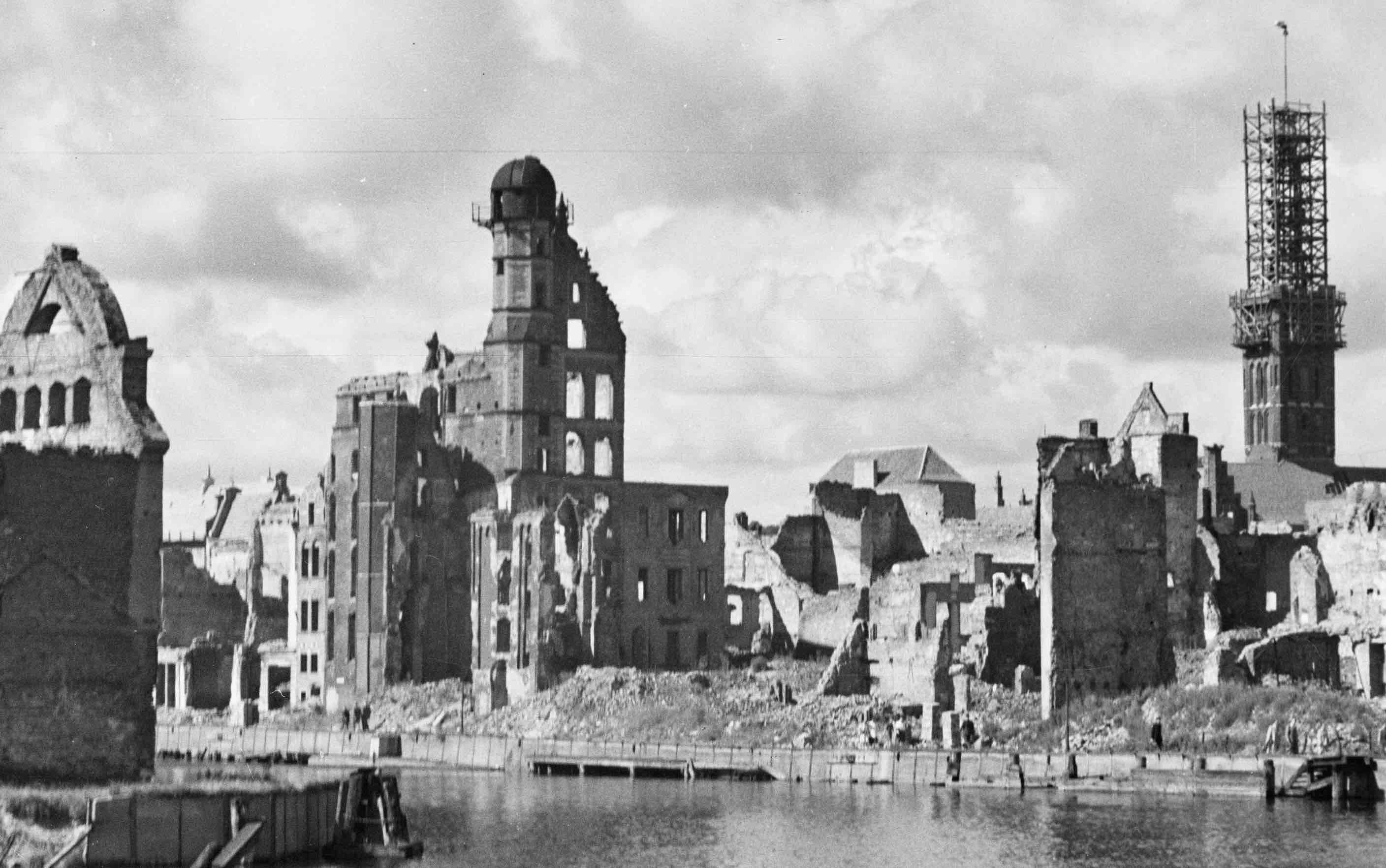 Originally planned to take the form of an outdoor exhibition, the coronavirus lockdown has instead seen the exhibition presented online where the pictures are available for general download for non-commercial purposes.Kazimierz Lelewicz/ Museum of Gdańsk 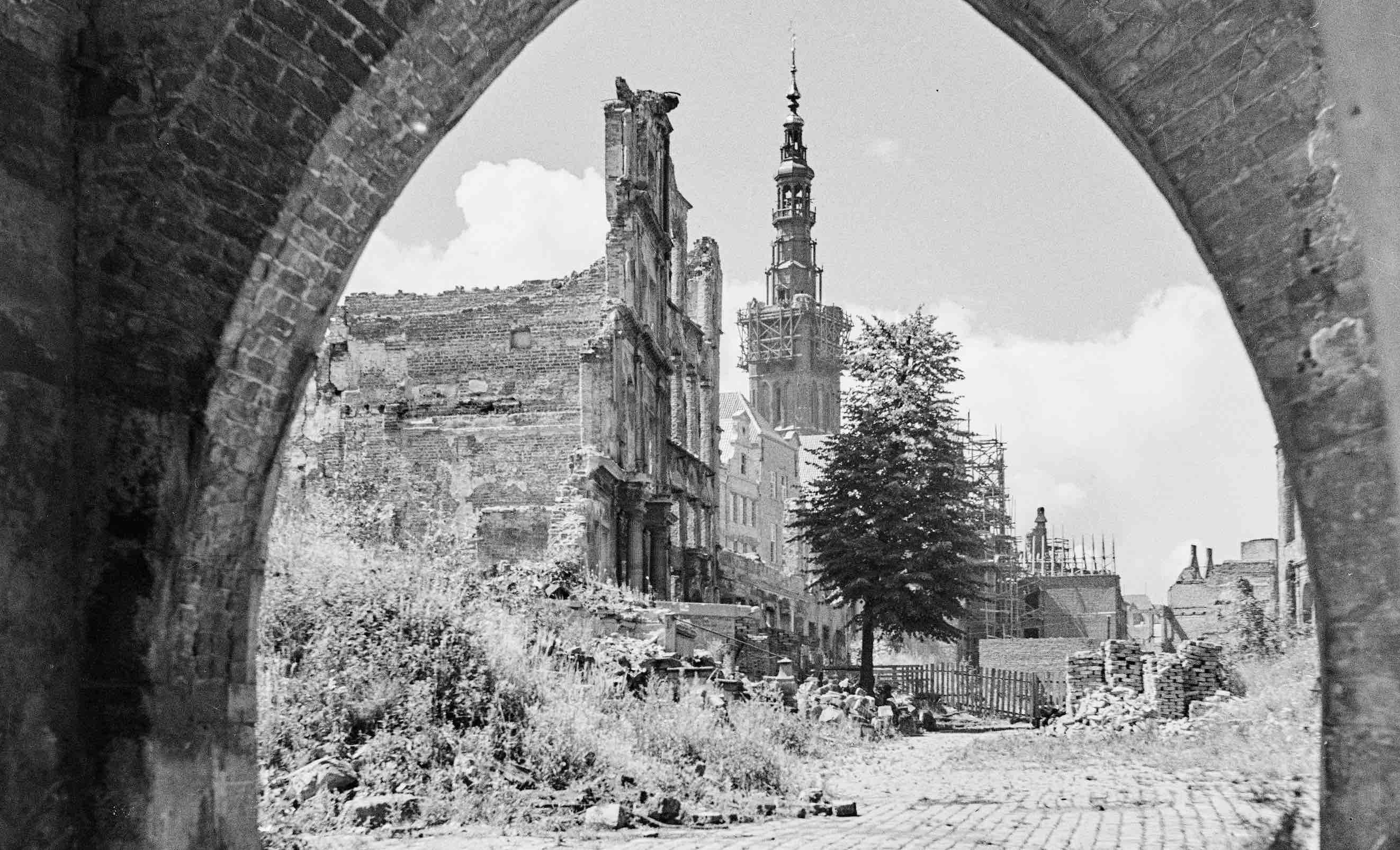 Having acquired thousands of pictures from the Lelewicz family, Dr. Gierszewski says that selecting pictures for the exhibition was a straight forward process. “We wanted to depict the story of post-war Gdańsk in the most recognizable way,” he says.Kazimierz Lelewicz/ Museum of Gdańsk 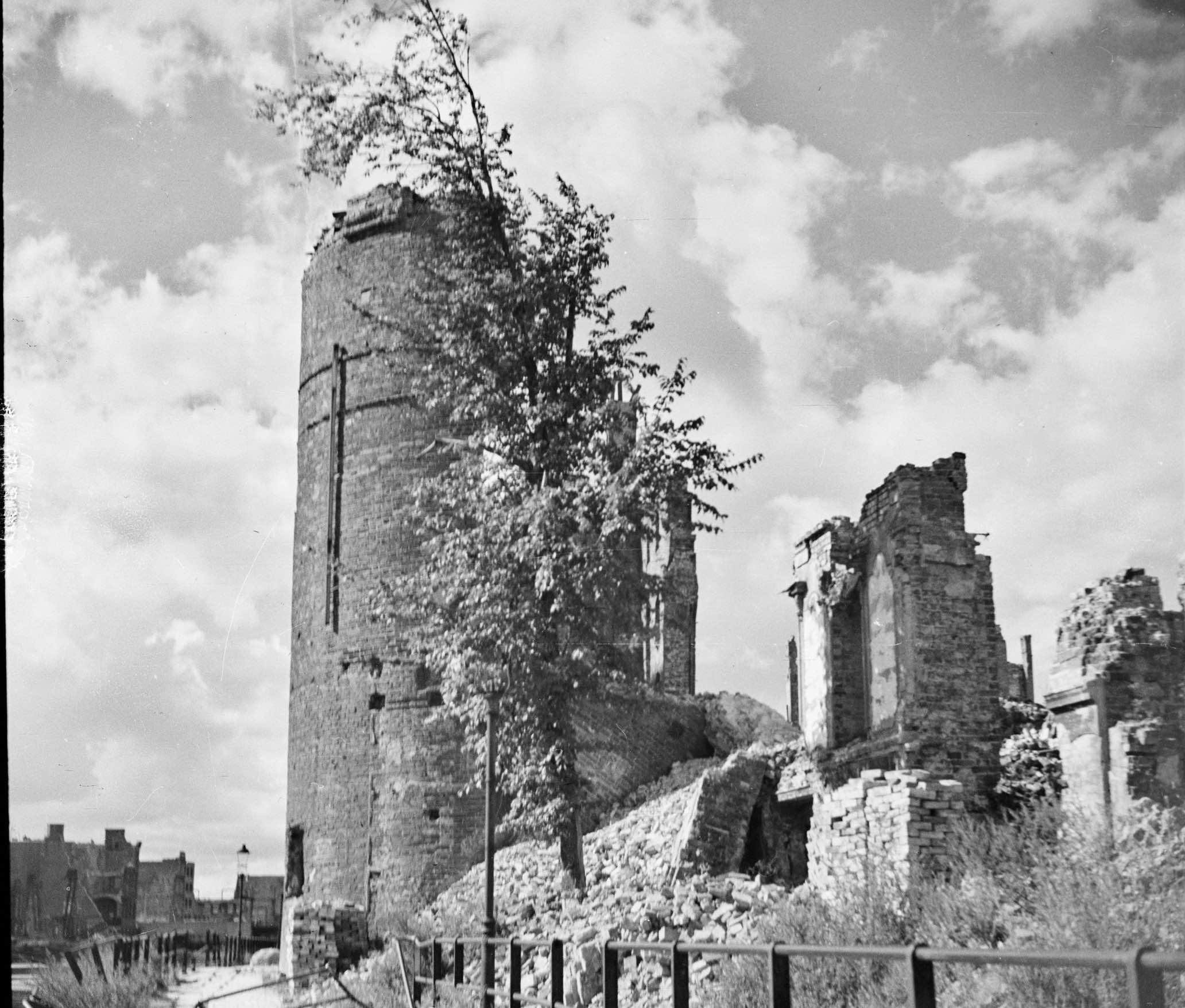 Accompanied by period observations provided by first-hand witnesses, the commentary that is paired with Lelewicz’s images provide unique personal insight. “Combined with the fresh greenery, the dark shapeless mass of walls and debris gained something of an antiquarian value,” wrote architect Jerzy Stankiewicz.Kazimierz Lelewicz/ Museum of Gdańsk 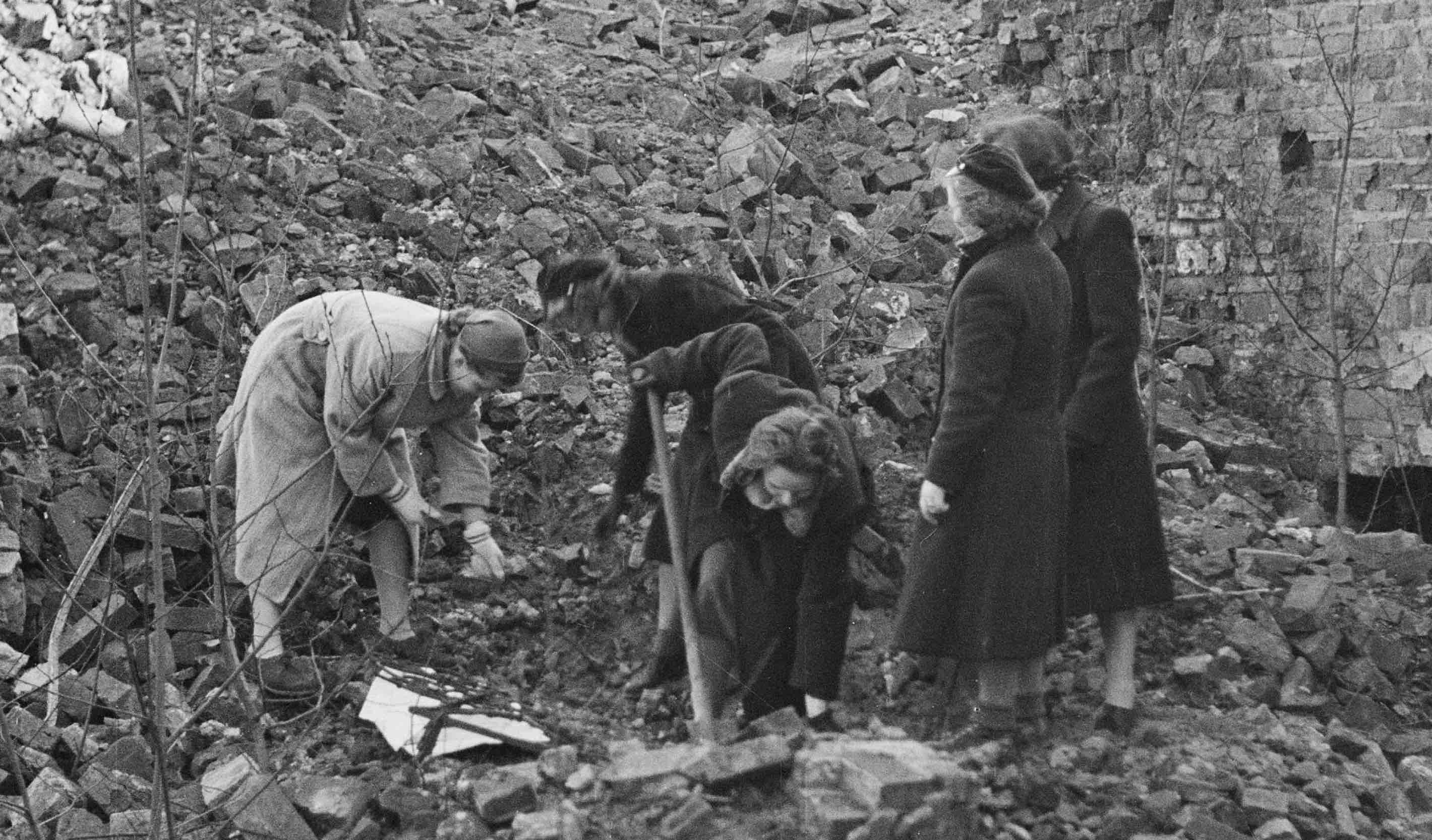 “Much was written about the enthusiasm of the reconstruction and the generosity of the citizens of Gdańsk that cleared the main arteries with their pickaxes and shovels,” recalled Włodzimierz Gorudniczuk, a civil engineer. “What drove them to do this? Is this an explosion of energy accumulated during the war, an energy that the occupier never managed to suppress through physical and moral terror?”Kazimierz Lelewicz/ Museum of Gdańsk 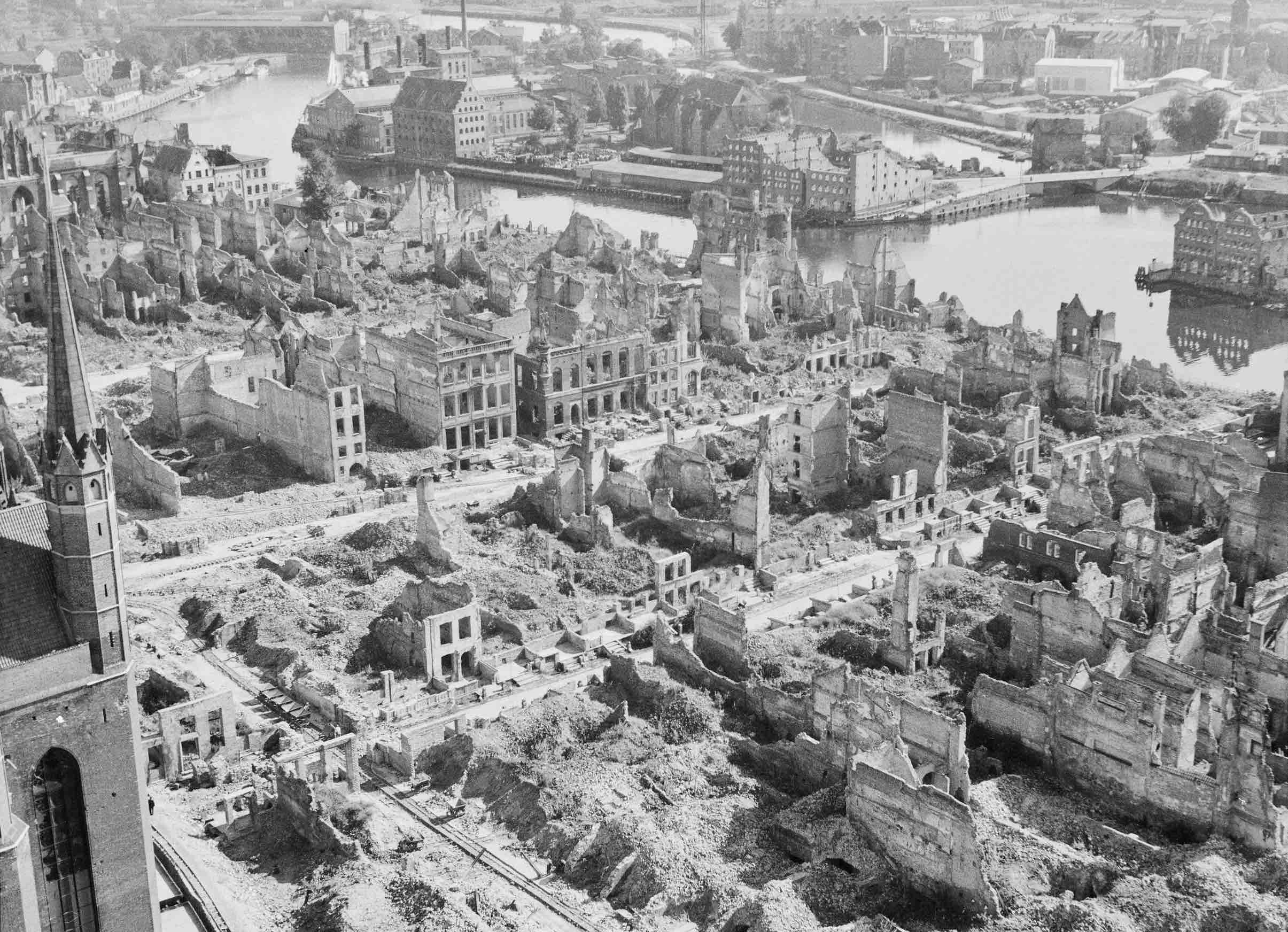 According to Stanisław Goździelewski, a blacksmith, people quickly became inured to the sea of ruins around them. Though accustomed to the sight himself, he admitted that his view from the Town Hall tower was “unimaginable”.Kazimierz Lelewicz/ Museum of Gdańsk 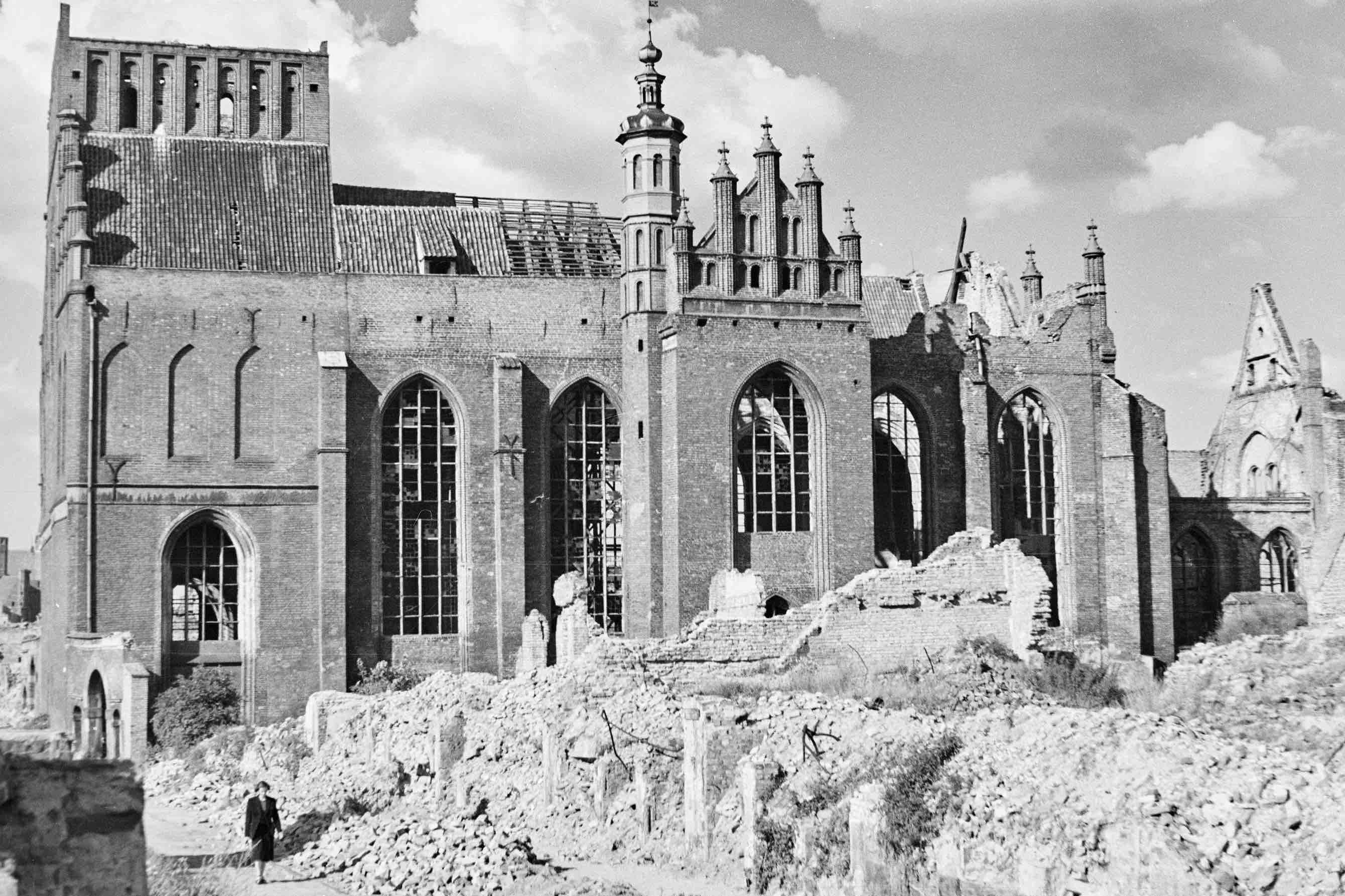 Not everyone shared the commitment to reconstruction. “I believe Gdańsk should not be rebuilt at all,” argued architect Mieczysław Janowski. “No-one today would seriously consider rebuilding the Roman Forum… Let us not rebuild the ruins but instead demolish their foundations.”Kazimierz Lelewicz/ Museum of Gdańsk 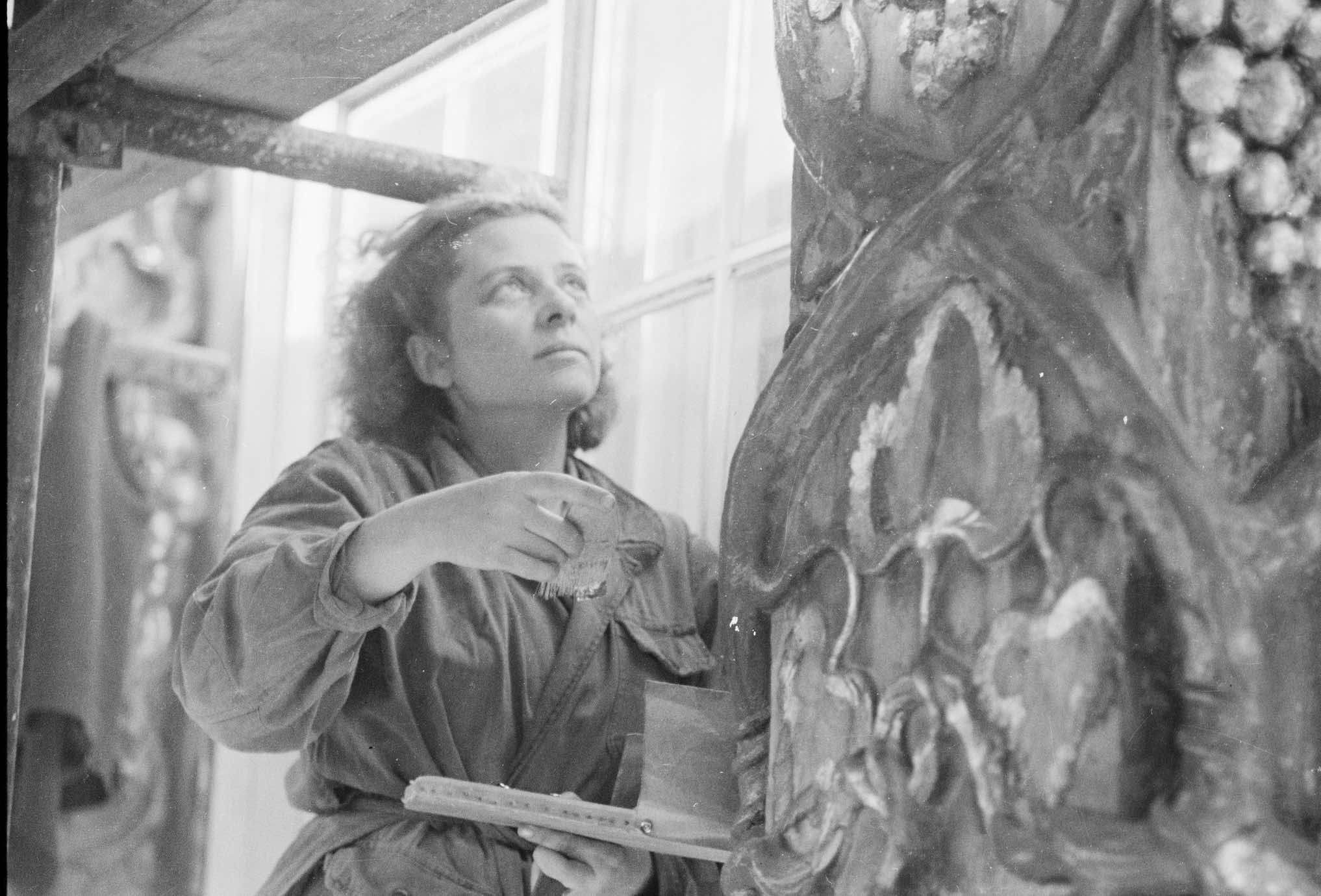 Split to cover both the destruction and reconstruction of the city, Dr. Gierszewski says the museum was keen to emphasize the human angle in the city’s story as much as the visual aspect of the damage.Kazimierz Lelewicz/ Museum of Gdańsk 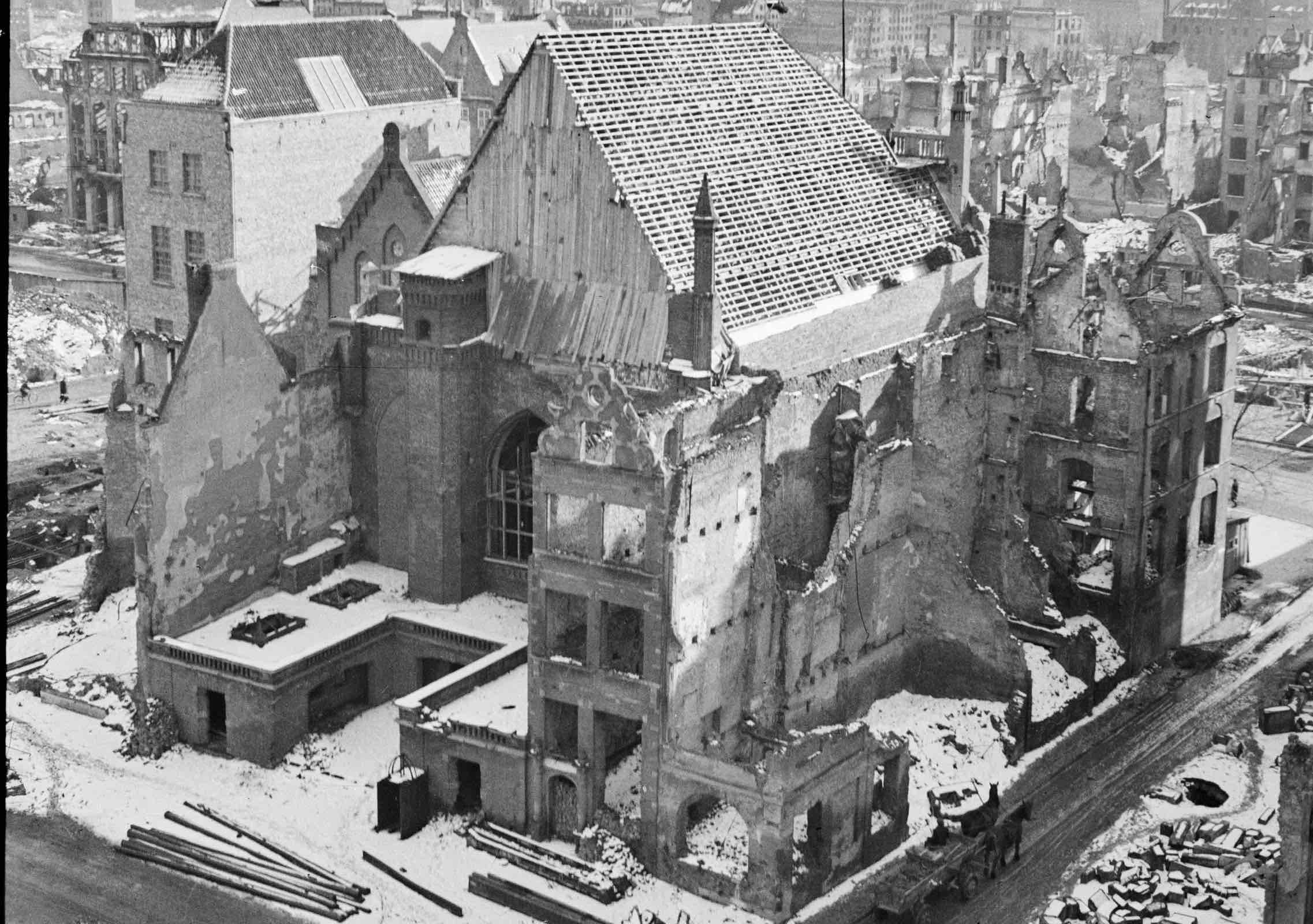 “Originally three ideas were proposed,” says Dr. Gierszewski. “Some wanted to leave the city centre as it was as a memorial to the war whilst others campaigned to build a Socialist town on the ruins. The third option, rebuilding, was made possible thanks to the small-scale activities of planners and architects who had already conducted lesser projects in Warmia. Over time, the success of the rebuilding became a business card for the Communist regime.”   Kazimierz Lelewicz/ Museum of Gdańsk 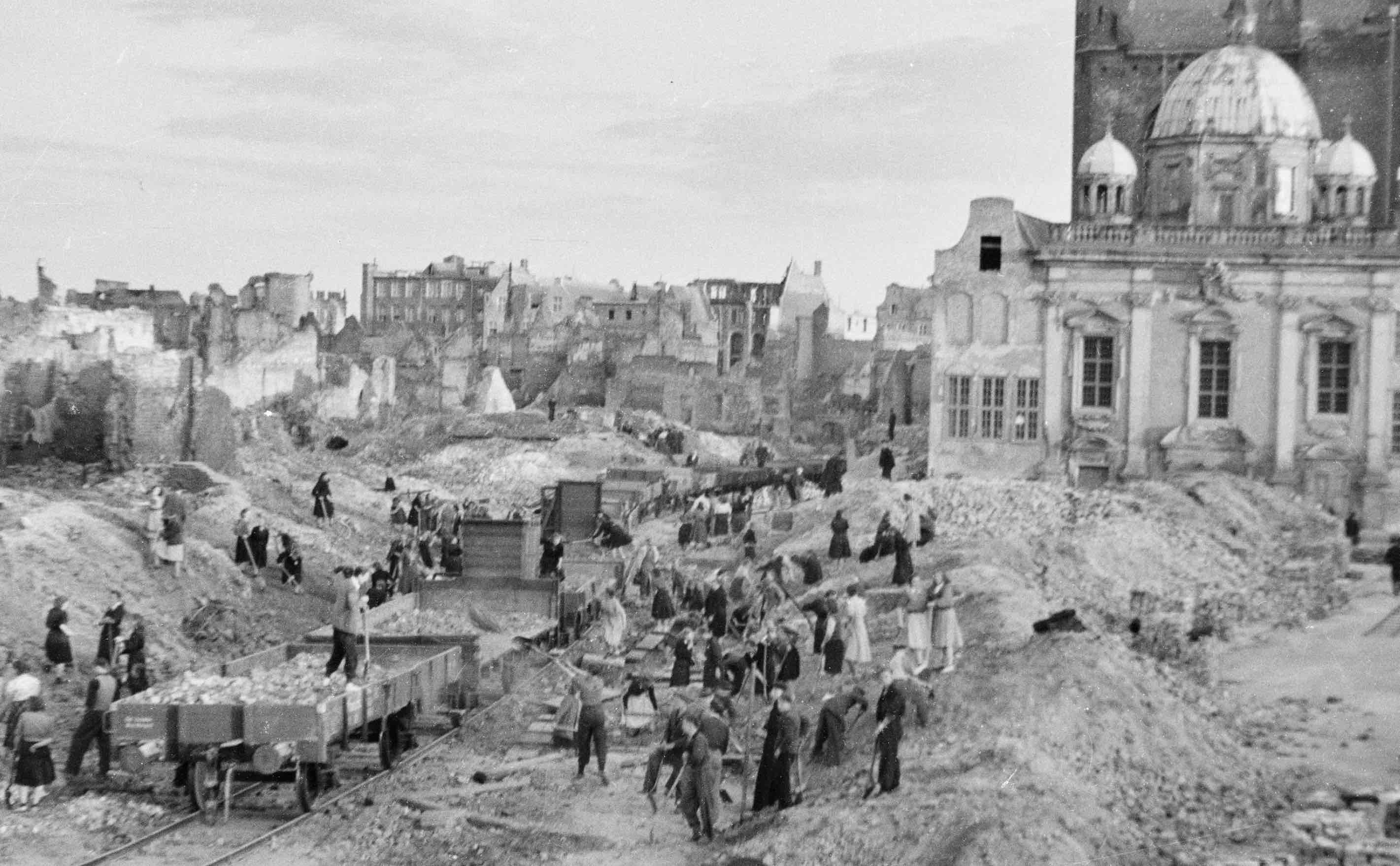 “Initially construction was self-sufficient with brick obtained from the demolished ruins,” wrote Włodzimierz Gorudniczuk. “But when daily consumption exceeded 100,000 bricks, supply became a problem. For unknown reasons Braniewo, a destroyed town, became the source of bricks and each day up to twenty trains would arrive to stations in Wrzeszcz and Gdańsk bearing new loads.”Kazimierz Lelewicz/ Museum of Gdańsk 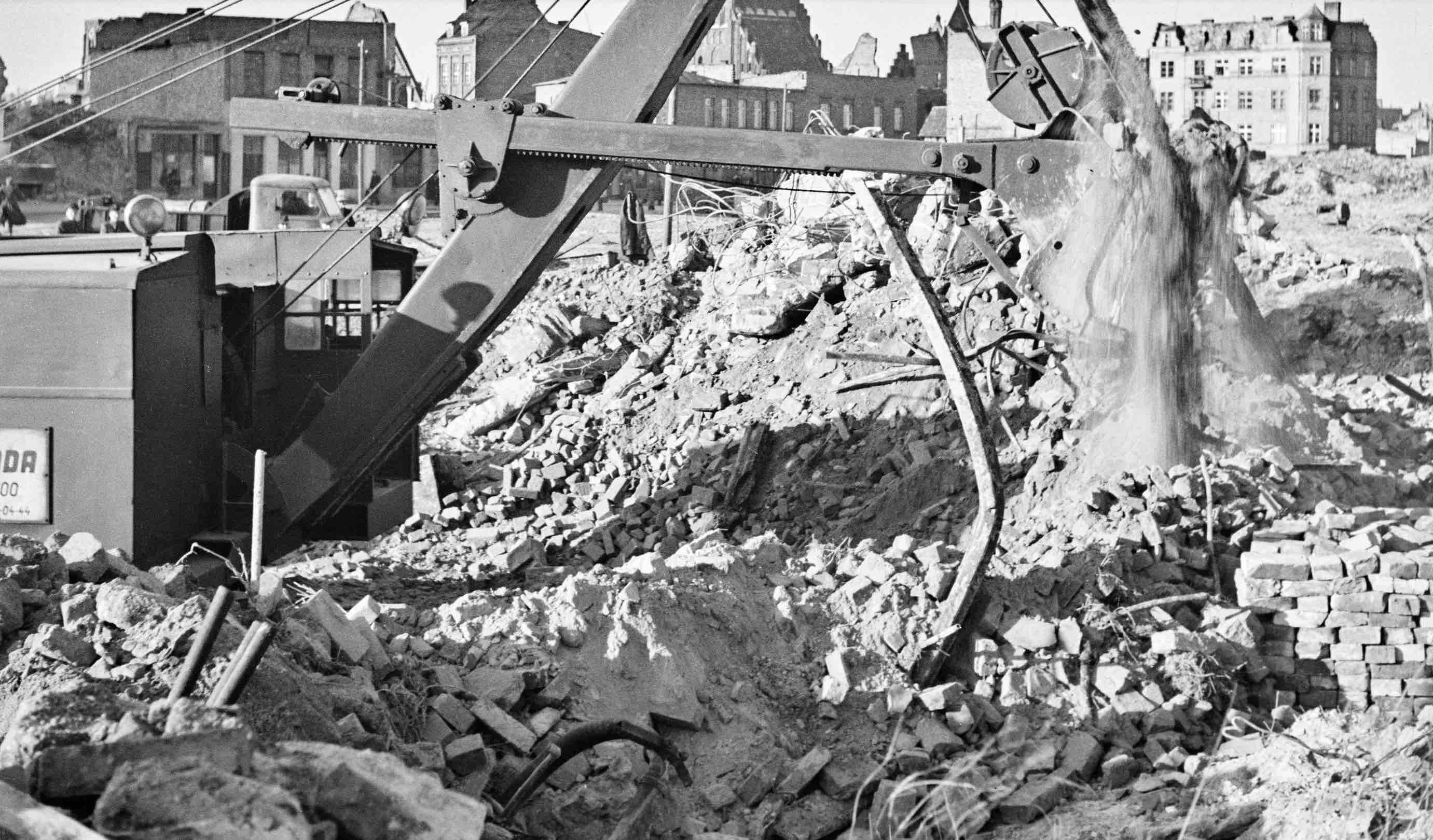 In some cases, remembered architect Henryk Frey, disintegrated rubble was repurposed and used as a base for floors. However, yet more was loaded onto boats and unceremoniously dumped in the Bay of Gdańsk.Kazimierz Lelewicz/ Museum of Gdańsk 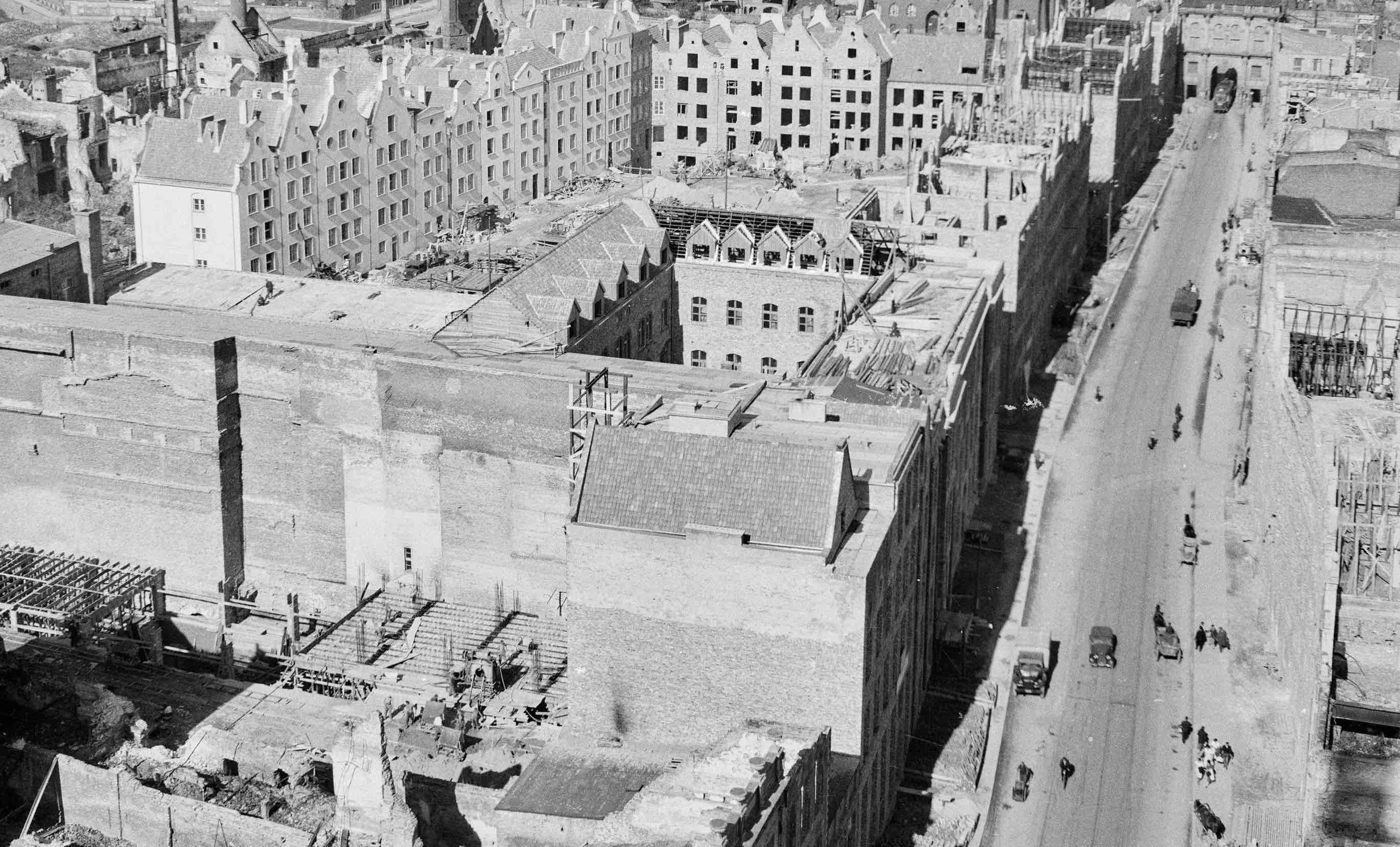 Dr. Gierszewski is hopeful that exhibition will give people a fuller idea of the city’s troubled story. “When people visit Gdańsk, they’re not always aware that they’re walking around reconstructed models of buildings that no longer exist. The reconstruction wasn’t so much a 1:1 copy, rather an imitation of the original and there’s not many places that tell this story.”Kazimierz Lelewicz/ Museum of Gdańsk

From the Lelewicz photographs in their possession, the Museum of Gdańsk have made 1,599 available online to the public. View them, at: dziedzictwo-gdansk.pl

In Napoleonic times, Danzig (now Gdańsk) was a republic… not a lot of people know that

Poland hits out a Putin’s “manipulation” of history

So good to “bee” back home: beekeeper turns disaster into triumph after criminals trash his hives