Home of the brave: the story behind Warsaw’s Tomb of the Unknown Soldier

As Poles criss-cross the country heading home to commune with their ancestors at family graves this weekend, the conscience of the nation remains firmly in Warsaw at the Tomb of the Unknown Soldier.

It is here on Piłsudski Square where the eternal flame of the Polish soul burns and where the nation collectively pays tribute to all Poles who have sacrificed their lives for the homeland.

Its position within the remaining section of colonnade of the Saxon Palace, which was destroyed by the Germans in 1944, resonates with symbolism.

In a country where the traumas of the past are very much part of the present, the exposed brick at the edges from where the tomb has been shorn away from the palace’s main structure appear like an open wound yet to heal. 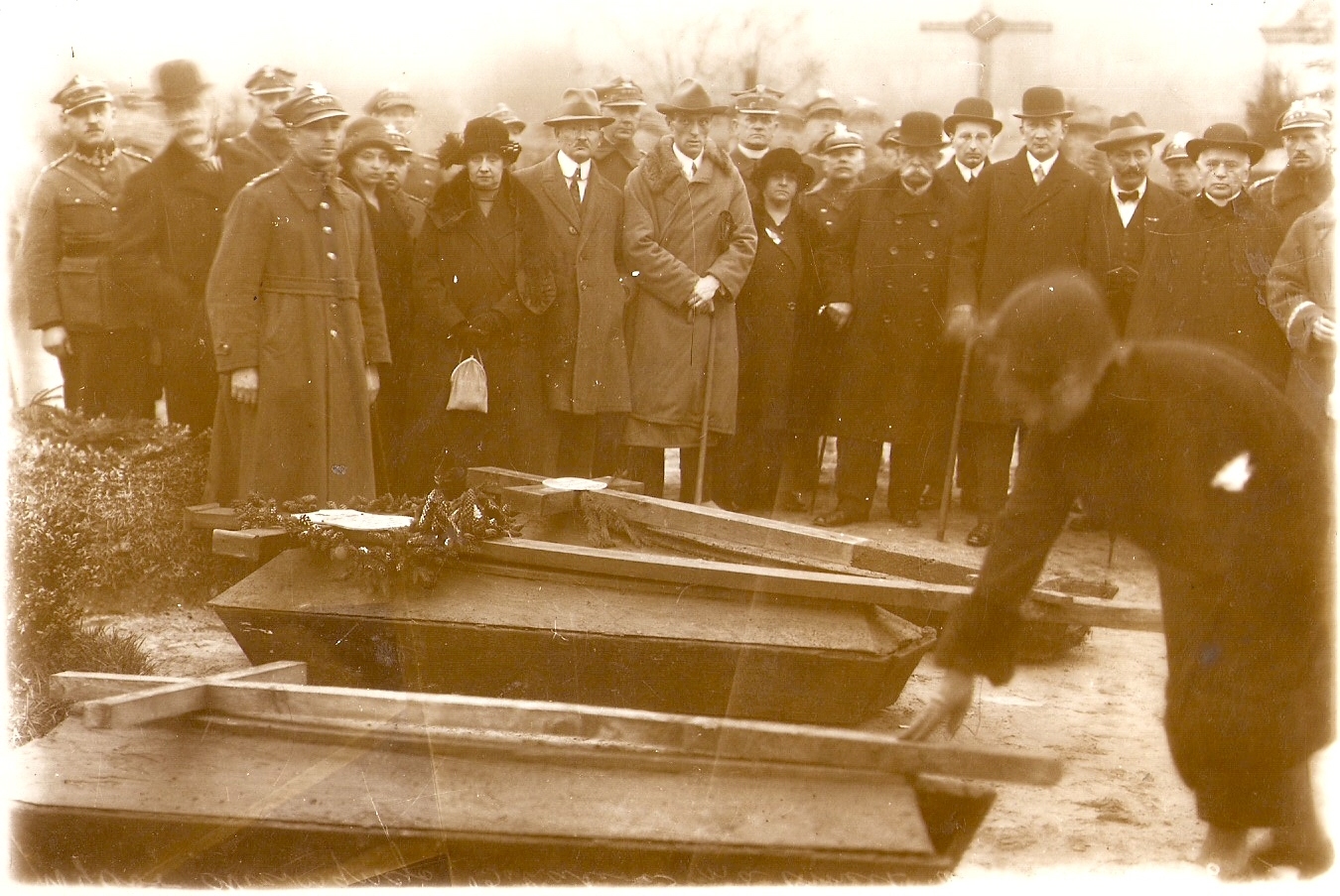 The boy’s remains were chosen at random from a total of three.Wikipedia

Damaged but still upright, it stands as a totem to the suffering of Poles in the 20th century and their subjugation to neighbours in the previous two centuries.

Yet its pugnacious resilience symbolises the perseverance of the Polish nation. Polished black granite panels bear the names and dates of over 200 battles in which Poles have fought, from Cedyna in 972 up to the Berlin in 1945, shouting loudly to anyone who may still be in doubt that the Poles always have and always will fight for their homeland. 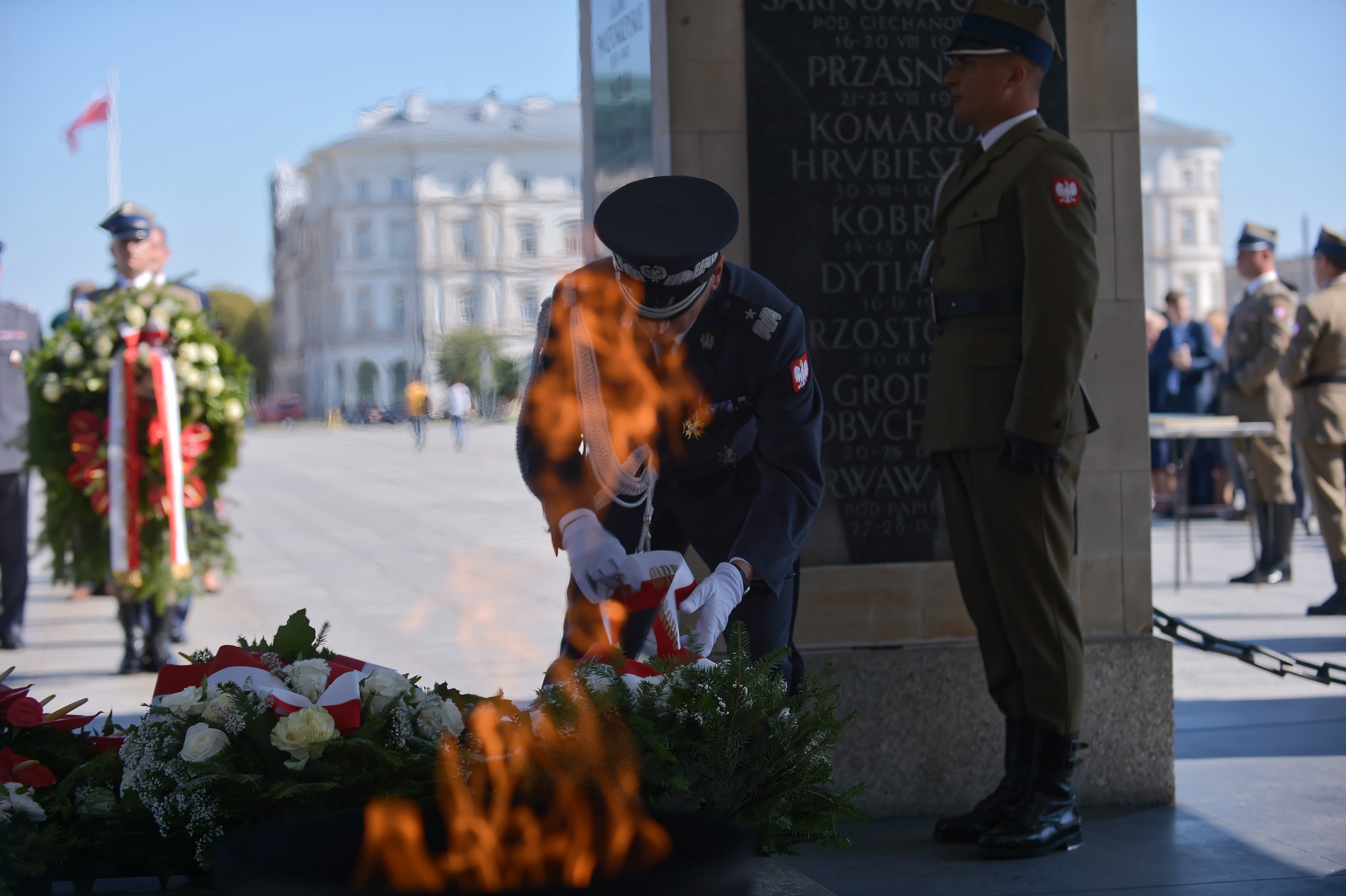 The tomb is the focal point of many national commemorations.Marcin Obara/PAP

Underlining the martial symbolism is the hourly changing of the guard, which reaches a daily crescendo at noon with a full-blown ceremonial exchange of watchkeepers.

Since 1925, with a break during WWII, well-drilled soldiers in sharp-edged dress uniforms have glided across the open square before breaking into a tightly controlled goose-step as they approach the tomb.

The soldiers take their position each side of the central tablet ready to issue reprimands to tourists who stray too near to the imponderable mysterium of the Polish soul. 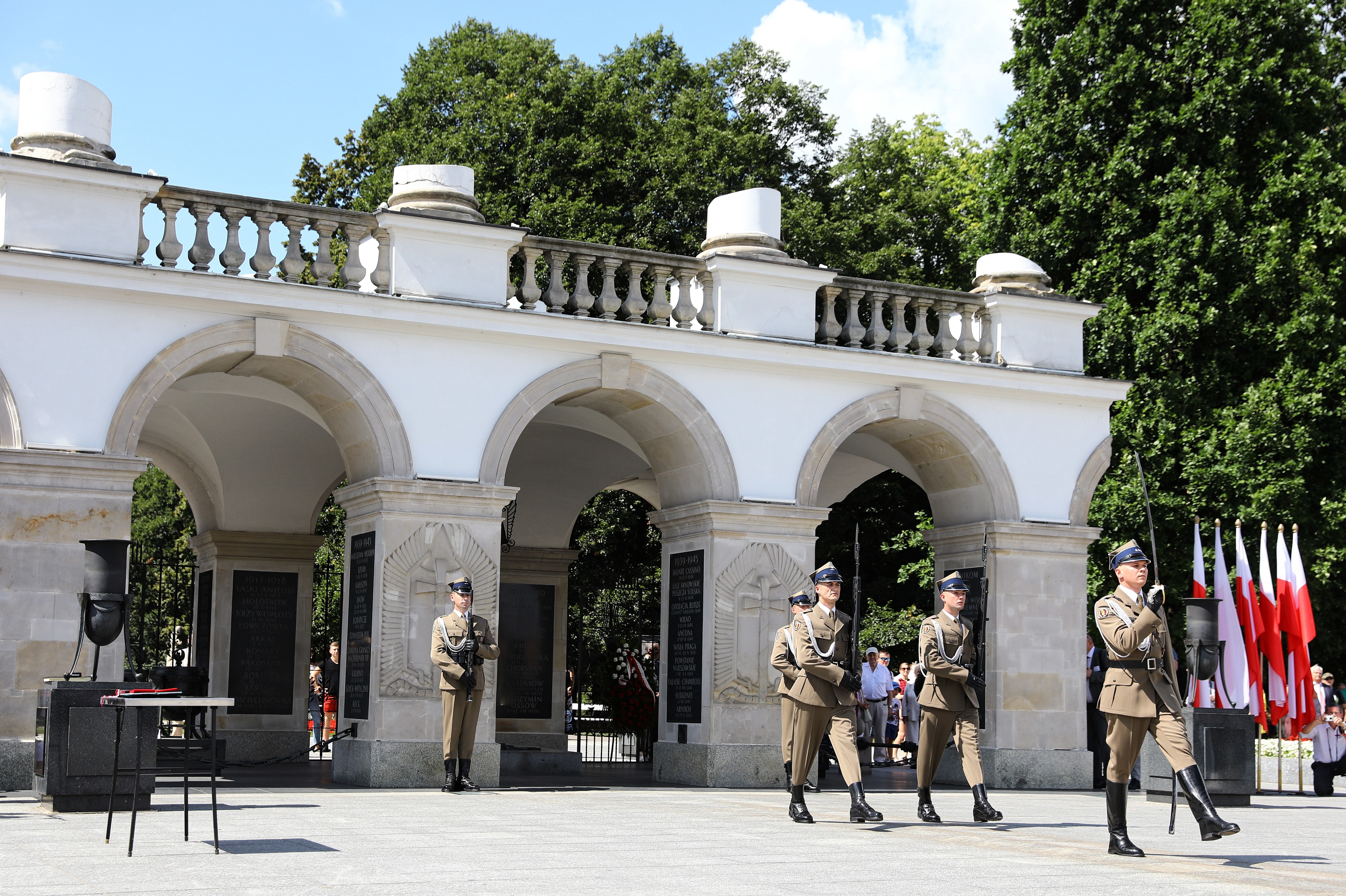 The colonnade is all the remains of the Saxon Palace, which was destroyed by the Germans in 1944.Rafał Guz/PAP

Yet, within this sepulchre lie the remains of a real person, an unknown 14-year-old boy who was placed in the tomb on November 2, 94 years ago.

The process of selecting which soldier would be laid in the tomb started by selecting a battlefield at random from the among fifteen that all met certain criteria – a huge number of soldiers must have been killed in a limited space, the battle must have been honourable and it had to be a battlefield that was not on enemy territory.

On April 4, 1925, the Historical Office of the Ministry of Military Affairs selected by the drawing of lots the battlefield of Lwów, where fighting had taken place between Polish and Ukrainian forces in 1918 and 1919. 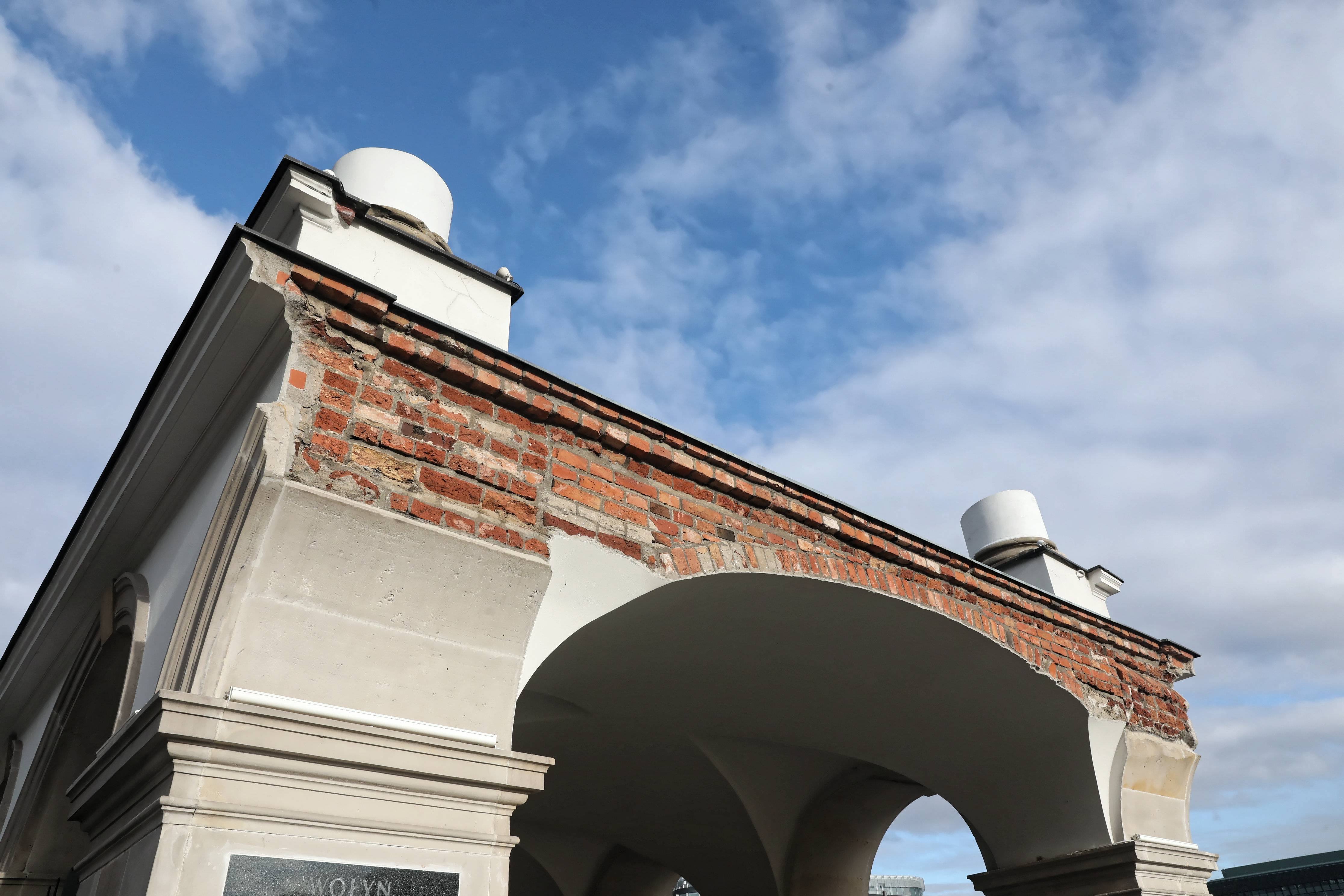 The exposed brick at the edges from where the tomb has been shorn away from the palace’s main structure appear like an open wound yet to heal.Tomasz Gzell/PAP

On October 29, three unmarked coffins of soldiers from the battle were dug up: a sergeant, a corporal and a soldier without rank but wearing the characteristic Maciejówka cap worn by boy volunteers.

The three coffins were closed and a Polish Armenian woman, Jadwiga Zarugiewiczowa, who had lost a son in the fighting in Lwów, was asked to select one at random. She chose the volunteer, who like her own son was one of the Lwów eaglets – the Polish teenagers who defended the city during the siege. 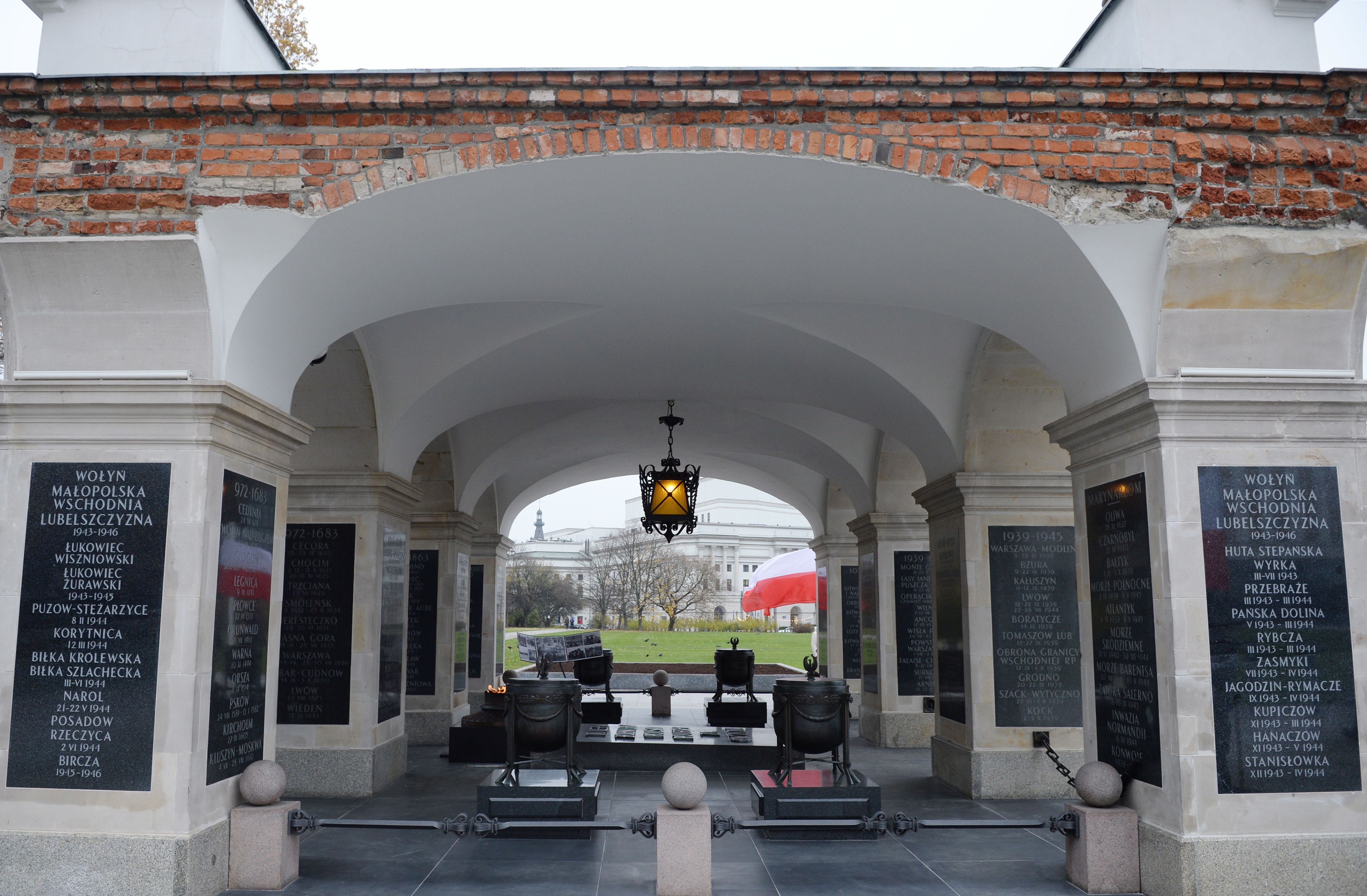 The slabs of stones bearing the names of battles had to be updated in the 1990s to include those censored out in communist history.Jacek Turczyk/PAP

The boy’s age at death was determined to be fourteen by a doctor assisting at the exhumation. He had wounds to his head and leg, so it was decided that he had died a heroic death.

The remains of the soldier were transferred to a pine coffin, which was placed in a larger coffin made of oak and lined with metal. The coffin was sealed and then placed on a raised bier in a chapel in Lwów and covered in national colours. It was guarded all night.

On October 30, the coffin was transported to the cathedral in Lwów. Crowds gathered along the route and the streets were dressed in red-and-white flags. 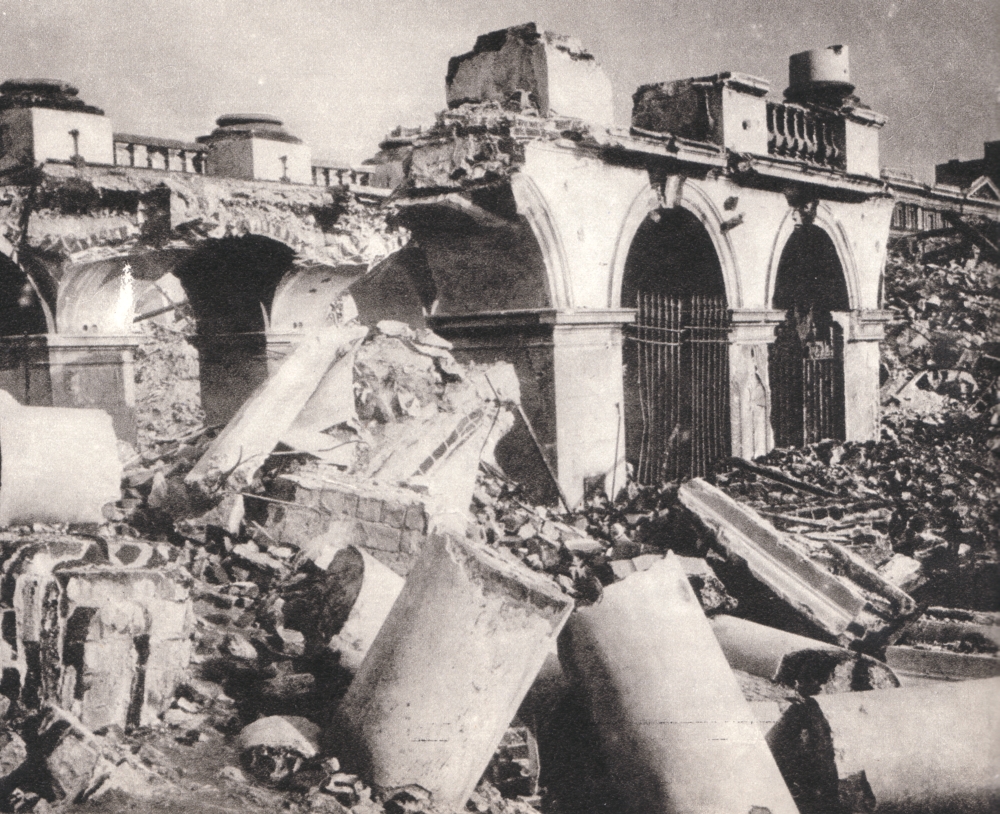 The remains of the Saxon Palace after the war.Wikipedia/PAP

On November 1, the coffin travelled to Warsaw on a train with open doors so that crowds could catch a glimpse of the young hero. Orchestras played funeral marches at stations on the route.

When the coffin arrived in Warsaw the next day it was placed on a gun carriage drawn by six horses and taken to St. John’s Cathedral.

At 13.00, church bells started ringing across the city as the remains of the unknown soldier were taken to the specially designed tomb on Saxon Square, as Piłsudski Square was called up to 1928.

The coffin was finally placed in the tomb, which bears the words: “Here lies a Polish soldier who fell for his homeland”. 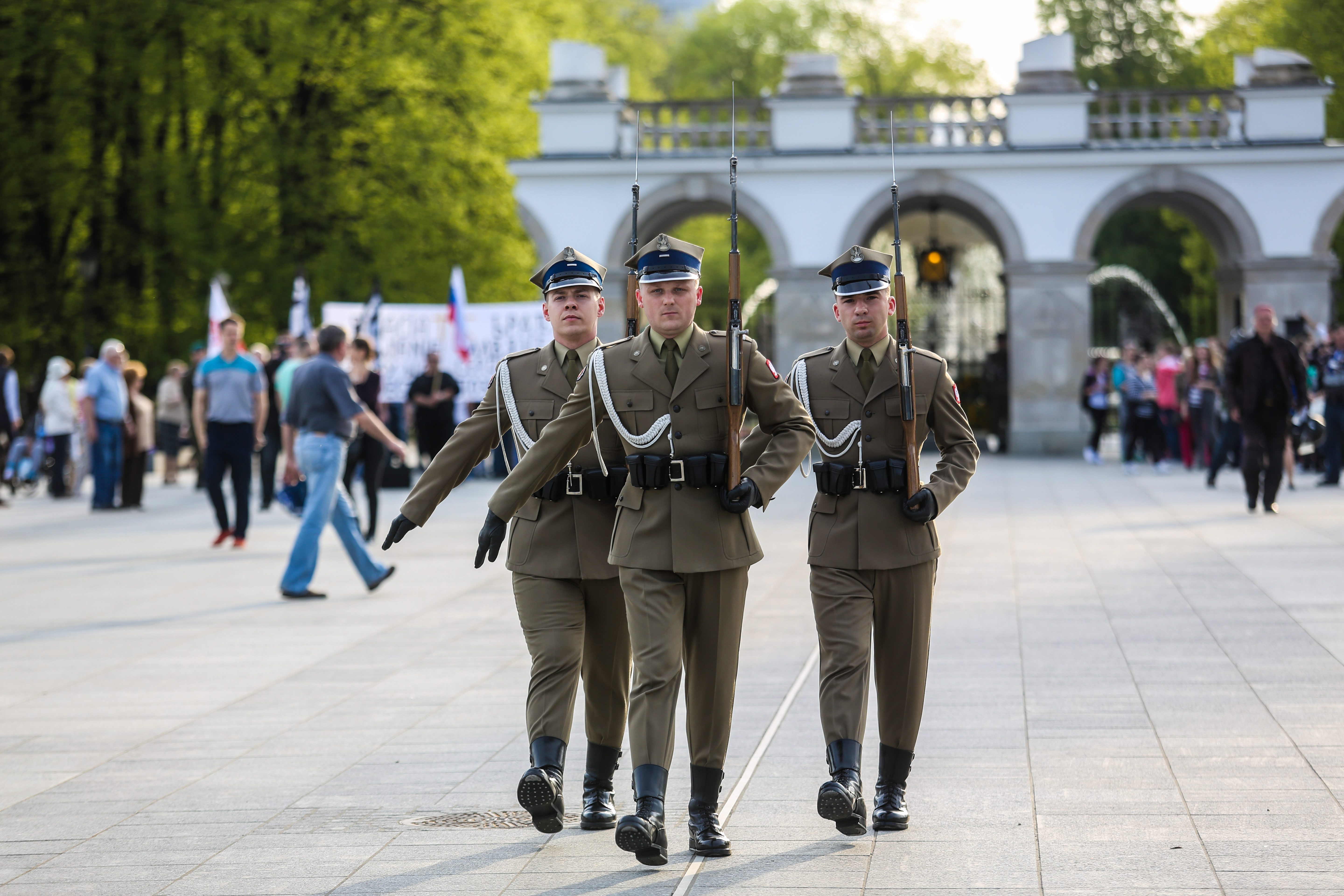 Commemorations took place in other cities across the country and minute’s silences were held in many places.

Around the tomb urns were placed with soil from the other fourteen battlefields not selected.

Since then, the tomb has had a troubled history. After being slightly damaged during the siege of Warsaw in September 1, 1939, the Saxon Palace in which the tomb was located was blown up by the Wehrmacht after the fall of the Uprising in 1944. Only the central colonnade containing the tomb was preserved. 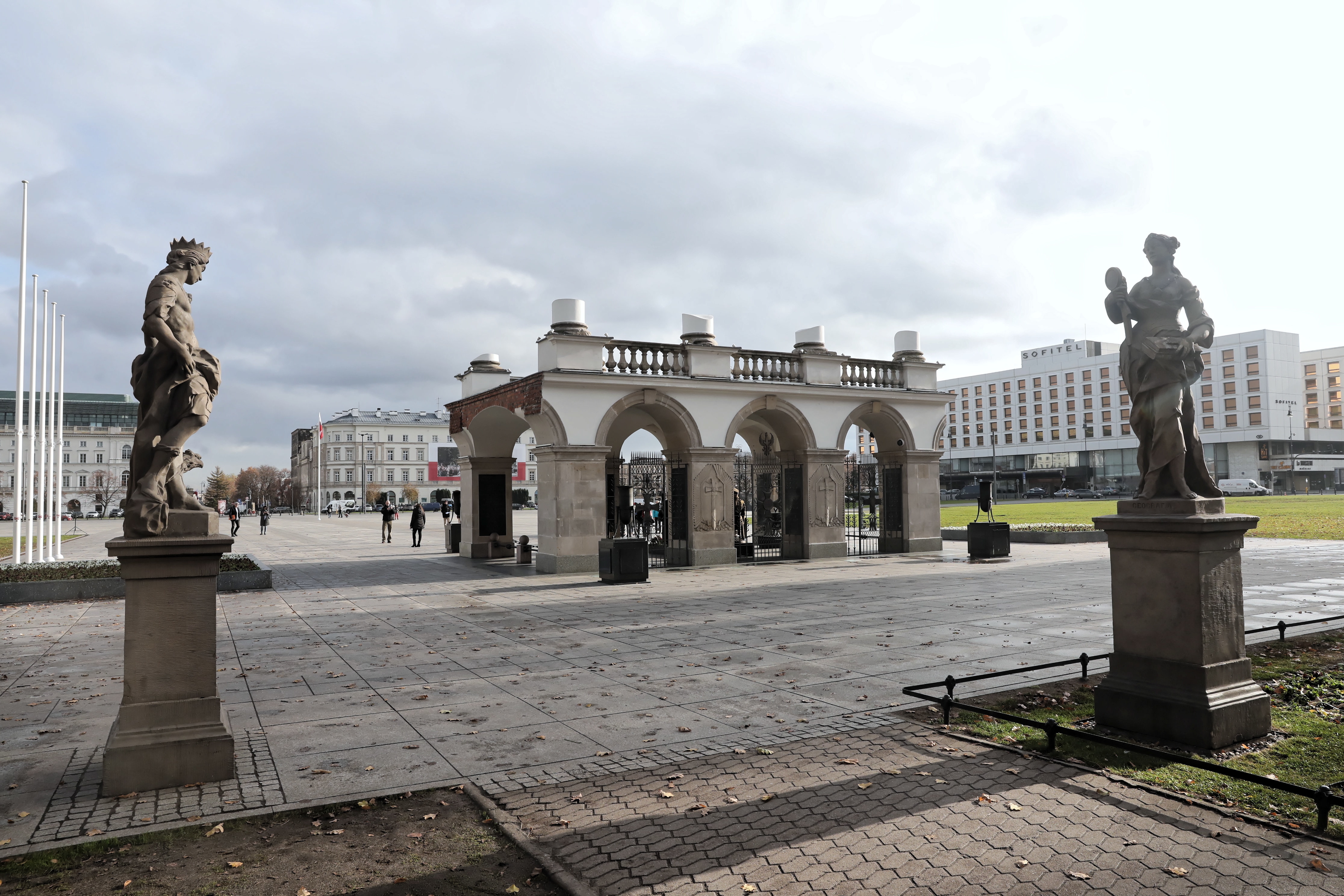 Damaged but still upright, it stands as a totem to the suffering of Poles in the 20th century and their subjugation to neighbours in the previous two centuries. Tomasz Gzell/PAP

In 1946, the tomb was reopened in the form in which it exists today. Soil from an additional 24 battlegrounds was added to the urns and the names of other battles were added to the existing roll call.

However, battles from the Polish-Soviet war of 1920 were not included, as well as many battles fought by Polish soldiers in the West during World War Two. These omissions were corrected in 1990 after Poland had regained its independence.