Even by the sensationalist standards of the modern celebrity world, there is little about the life of Lily that can be considered normal.

Rescued from the jaws of death in her youth, the 300 kilogram heavyweight has since gone on to accrue countless media appearances whilst also racking up a cult following numbering over 10,000 on Facebook. 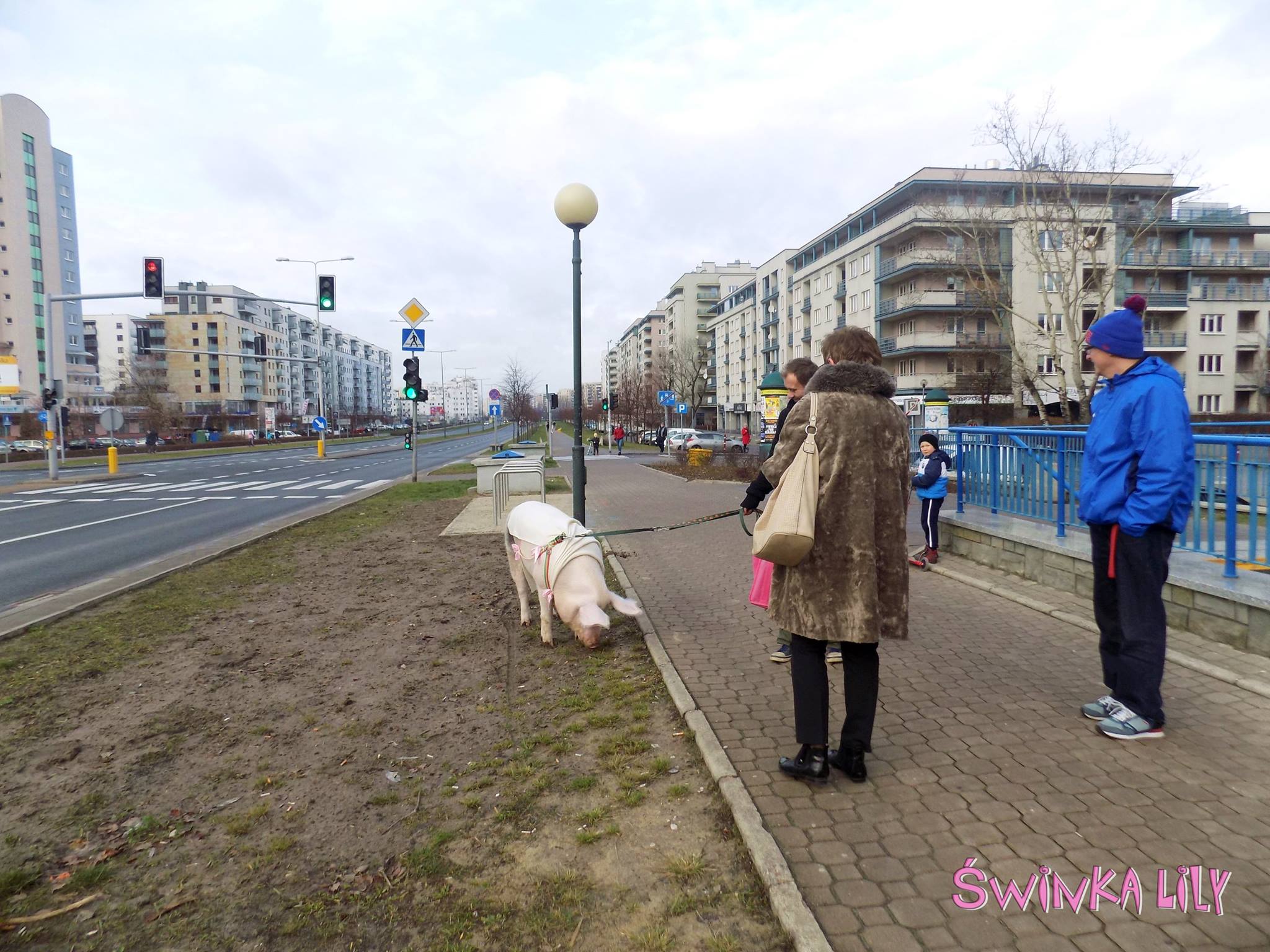 Moving into the couple’s small apartment in Warsaw’s Ursynów suburb, Lily quickly achieved local celebrity after photos began circulating of her being walked on a leash around the city.Swinka Lily/Facebook

However, this is not a showbiz diva, rather a pig that has become one of Poland’s most famous living animals.

Saved from a slaughterhouse in 2014 by Paweł Połoński and Katarzyna Eisler, the couple adopted the piglet when she weighed just four kilos. The decision to do so, they tell TFN, was marked by its spontaneity: “it was something we suddenly realized that we just simply had to do.” 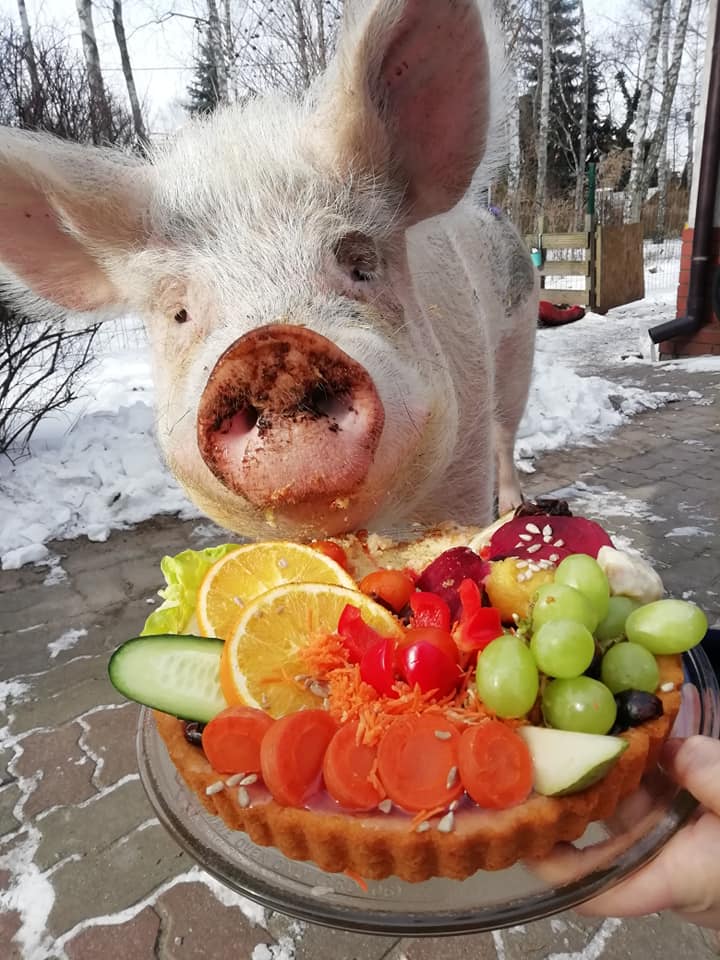 A much-loved local figure, it has become commonplace for neighbours to come round bearing treats for the pig.Swinka Lily/Facebook

Contacting pro-animal organizations for advice, they then proceeded to call several slaughterhouses to see if any were willing to donate a pig.

“Most reacted by laughing at us,” they say, “but eventually we found one breeder that was keen. He himself chose the weakest pig from the most recent litter and, on our request, didn’t subject it to any painful, standard procedures such as extracting its teeth or cutting its tail.” 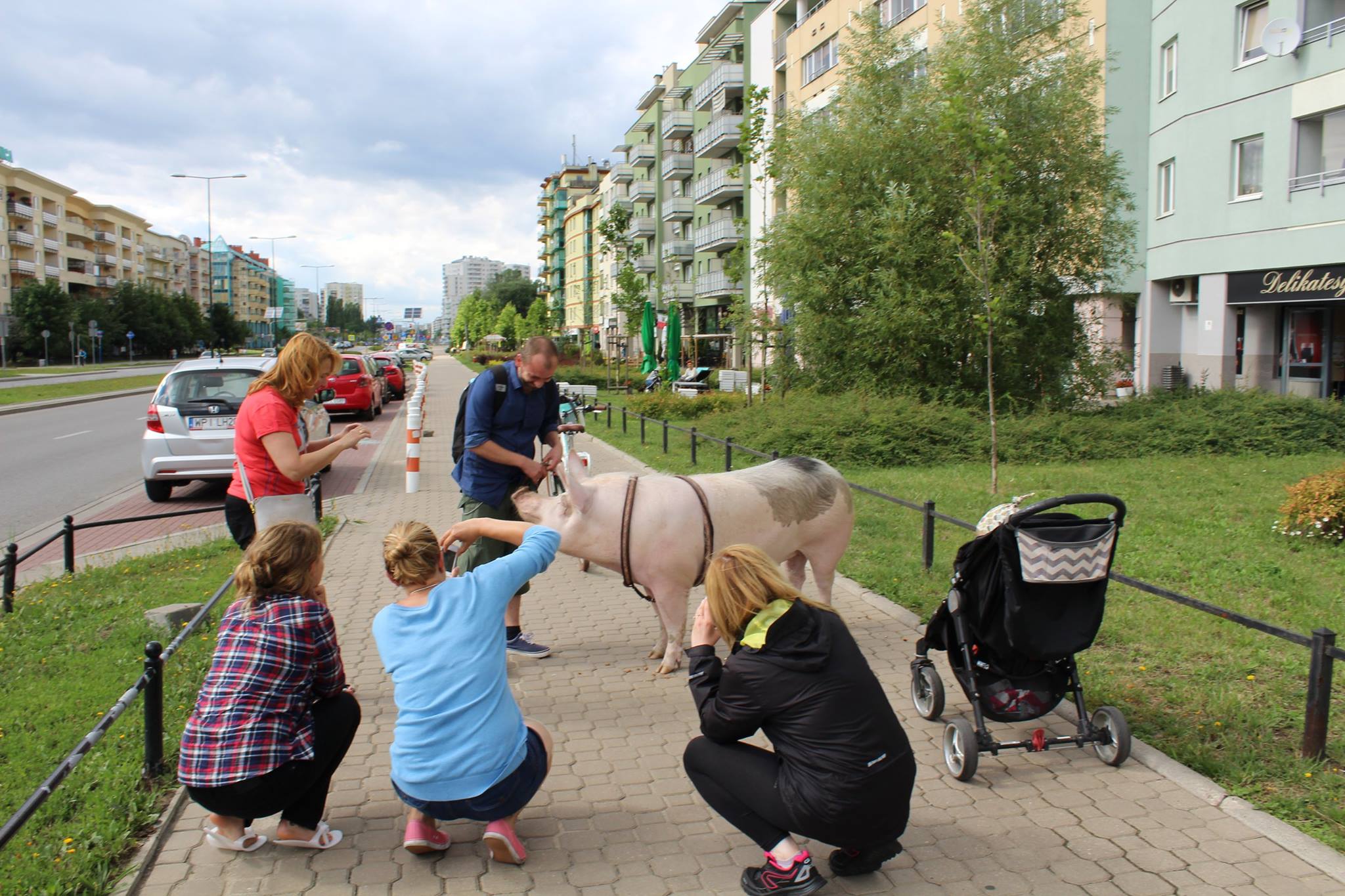 More than a curious novelty for the media and the public, Lily has positively effected changes to thousands of lives.Swinka Lily/Facebook

With no experience of rearing such an animal, and with little information online, the couple learned to take a trial by error approach.

“Immediately though, we noticed how intelligent she was,” they say. “She started responding to her name after just 15-minutes or so, and she learned how to use a litter box from the first moment she was placed in it. 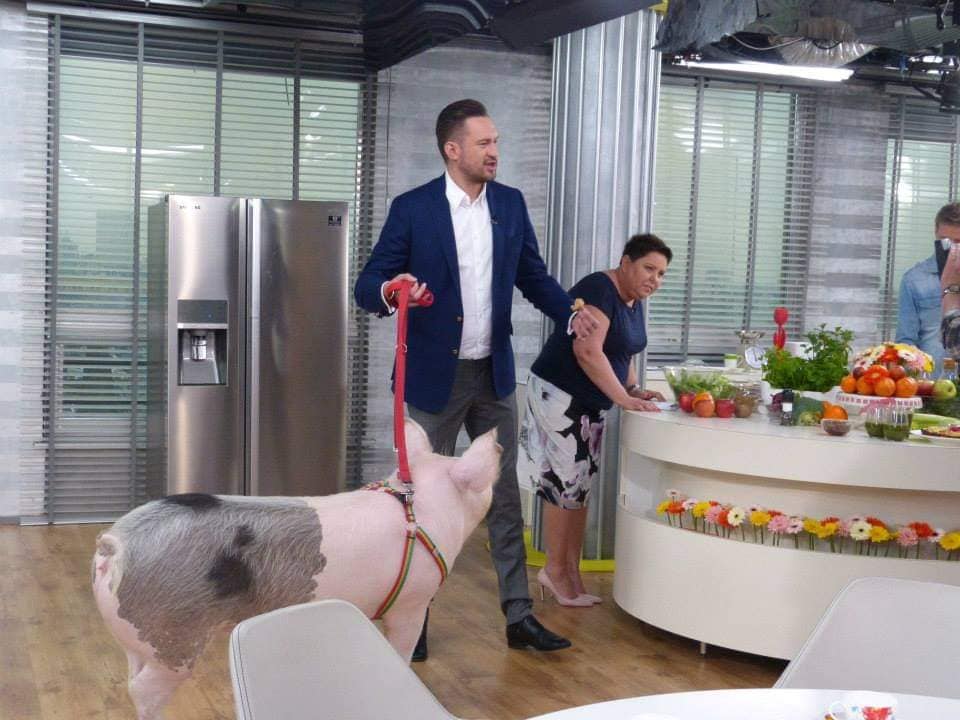 Despite her numerous TV appearances, Lily isn’t taking it for grunted.Swinka Lily/Facebook

“Pigs are smart,” they add, “after a few days she realized the fridge was where food was kept so she quickly learned to open it!”

Though renowned for their mental aptitude, Lily’s latent intelligence quickly came to the fore.

“She underwent dog training and completed a course that would usually take canines two-weeks in just two days.” 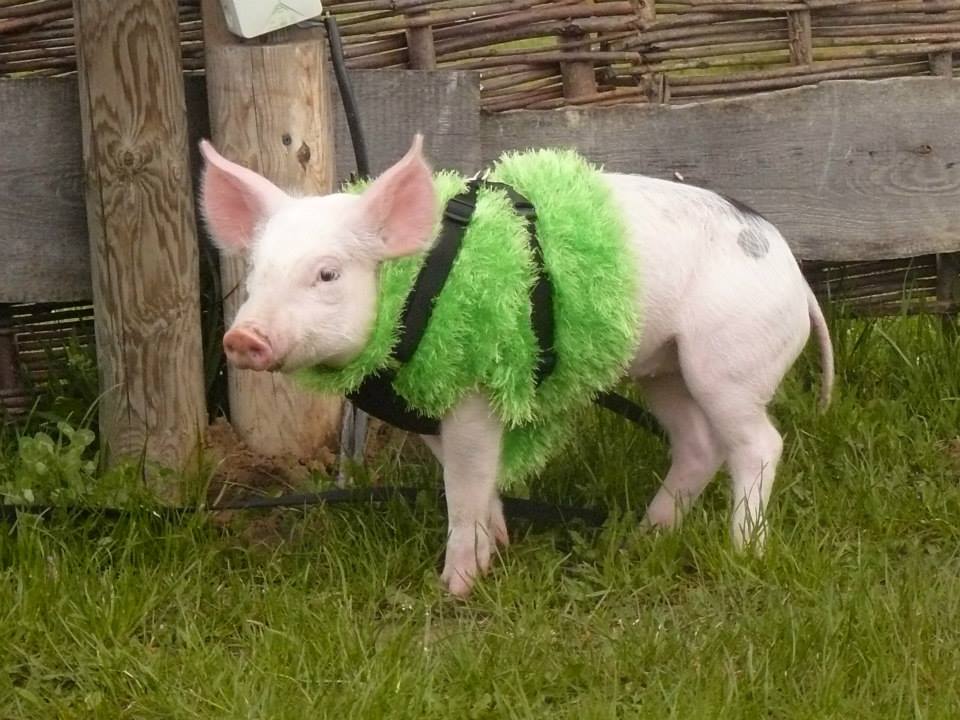 Saved from a slaughterhouse in 2014 by Paweł Połoński and Katarzyna Eisler, the couple adopted the piglet when she weighed just four kilos. The decision to do so, they tell TFN, was marked by its spontaneity: “it was something we suddenly realized that we just simply had to do.”Swinka Lily/Facebook

Among other things, this meant mastering commands to ‘walk’, ‘sit’, ‘stand’ and ‘leave’. Moreover, she quickly demonstrated an understanding of human emotions.

“She can read people flawlessly,” continue Paweł and Katarzyna. “If one of us is down, she’ll put her head in our lap to comfort us. If we’re ever annoyed with her, she can feel it and will crouch herself apologetically in a corner.”

Fond of breaking misconceptions, Lily has also done much to prove that pigs are, in spite of public belief, very clean animals. 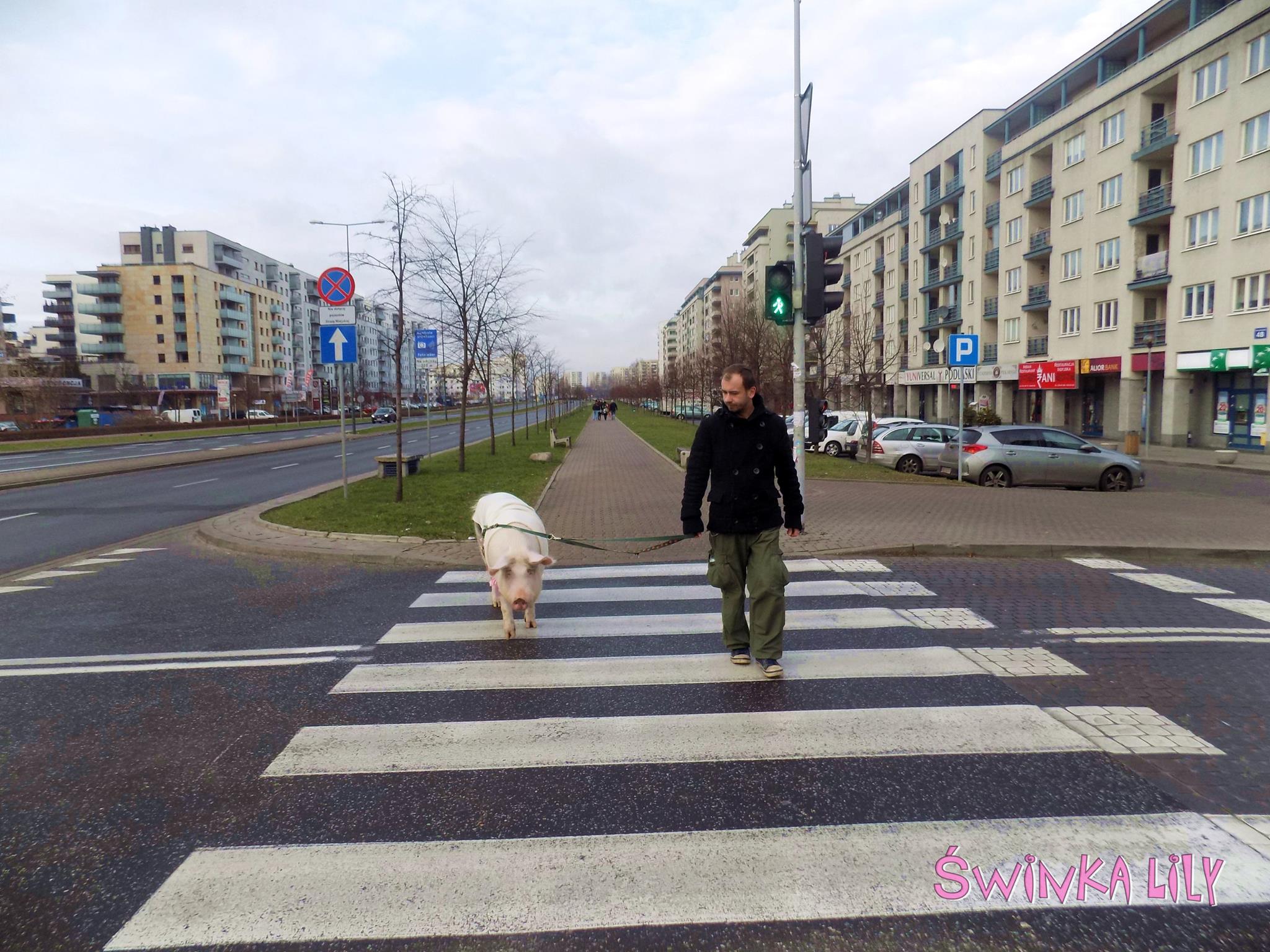 “People think that pigs are dirty because they seem them confined in captivity, often in close quarters and forced to sleep in their own faeces – but in the right conditions, a pig will never take care of its own physiological needs in the same place in which it eats and sleeps. Of course, that’s not to say wild pigs don’t love a mud bath, but that’s because the mud affords natural protection against the sun and insects.”

However, Lily’s fame owes more to just her myth-busting exploits. Moving into the couple’s small apartment in Warsaw’s Ursynów suburb, she quickly achieved local celebrity after photos began circulating of her being walked on a leash around the city.

Though some concerns and complaints were raised by residents in the same apartment block, her impeccable behaviour and increasingly high profile elevated her to the status of a much-loved local figure and it became commonplace, say the duo, for neighbours to come round bearing treats for the pig. 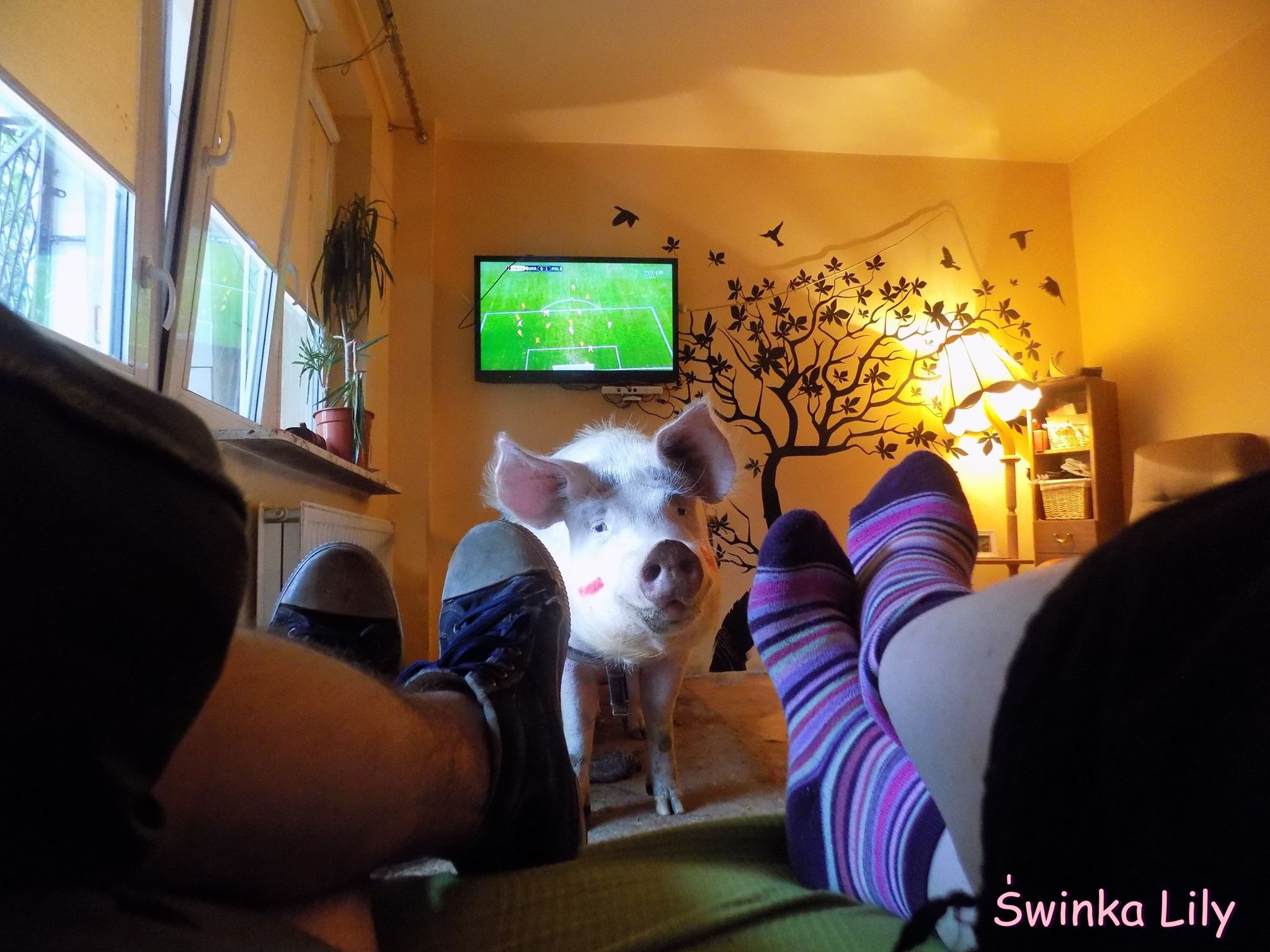 “In all truth,” says the duo, “she’s only really embarrassed once in public and that was when she wet herself on a subway platform – to make matters worse, we only had a few tissues with us. It wasn’t easy to clean, especially seeing we had to squeeze her urine into a plastic bag so we could use the same tissues again!”

Growing in size, it was a given that the couple would have to eventually relocate, and whilst they still remain in the area, today they reside in a house with a large garden and a runway for Lily.

“She’s become a big attraction,” say Paweł and Katarzyna. “On weekends, whole families come cycling past our house especially to see her.” 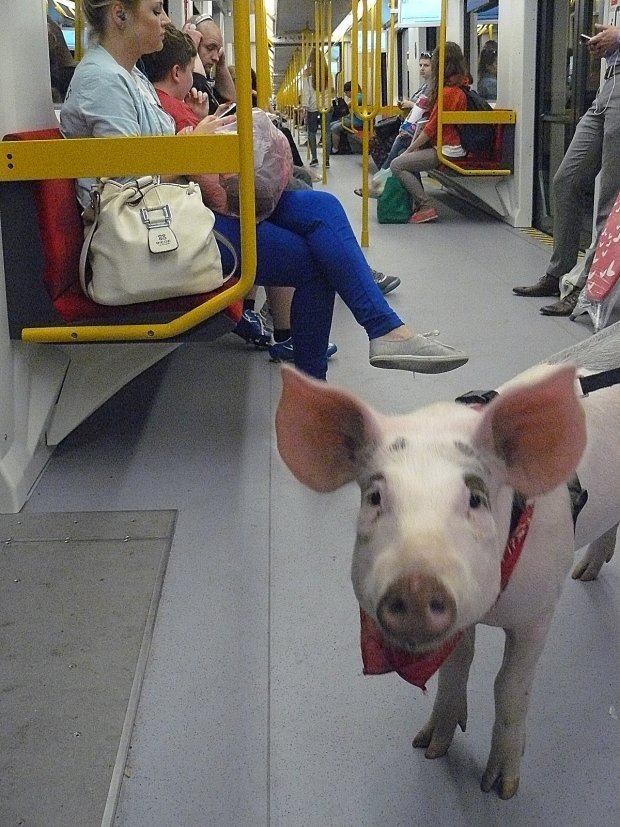 These are not her only fans.

With her domain overlooked by a vegan kindergarten named Przyjaciele Świnki (Friends of the Pig), she has become a firm favourite with the children.

“Of course, for safety reasons the kids aren’t allowed to enter her quarters,” say Paweł and Katarzyna, “but they do get the opportunity to throw her carrots and apples. She’s become a big part of their lives, and for many of the children the name Lily has become one of the first key words in their lives.” 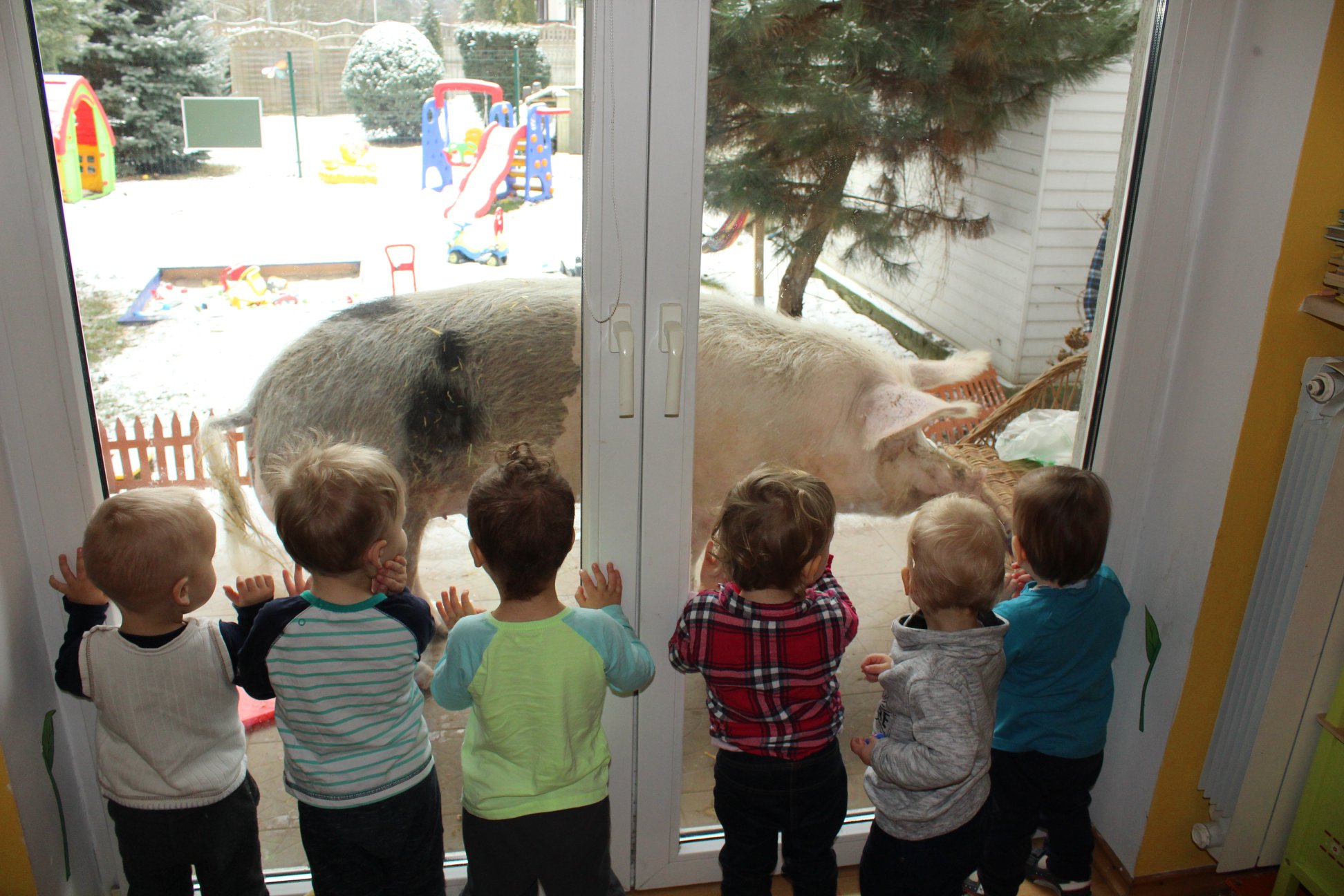 With her domain overseen by a vegan kindergarten named Przyjaciele Świnki (Friends of the Pig), she has become a firm favourite with the children.Swinka Lily/Facebook

Fond of belly rubs and bananas, the duo list Lily’s principal passions as being “food and relaxation”. Chomping through eight kilos of food per day, according to the couple she’s equally partial to allowing magpies to sit on her back and peck on her bristles.

Currently featured in a section of the Museum of Warsaw’s ongoing ‘Animals’ exhibition, Lily has not allowed fame to interfere with her daily life, and over the years has instead become an ensconced part of the couple’s family life.

“This pig changed our lives entirely,” they say. “She taught us how to make important decisions quickly, as well as to be courageous in our actions. Thanks to her, we’ve also met many wonderful people. But we don’t ‘own’ her. We live with her. She’s part of the family, and that’s what we love the most.” 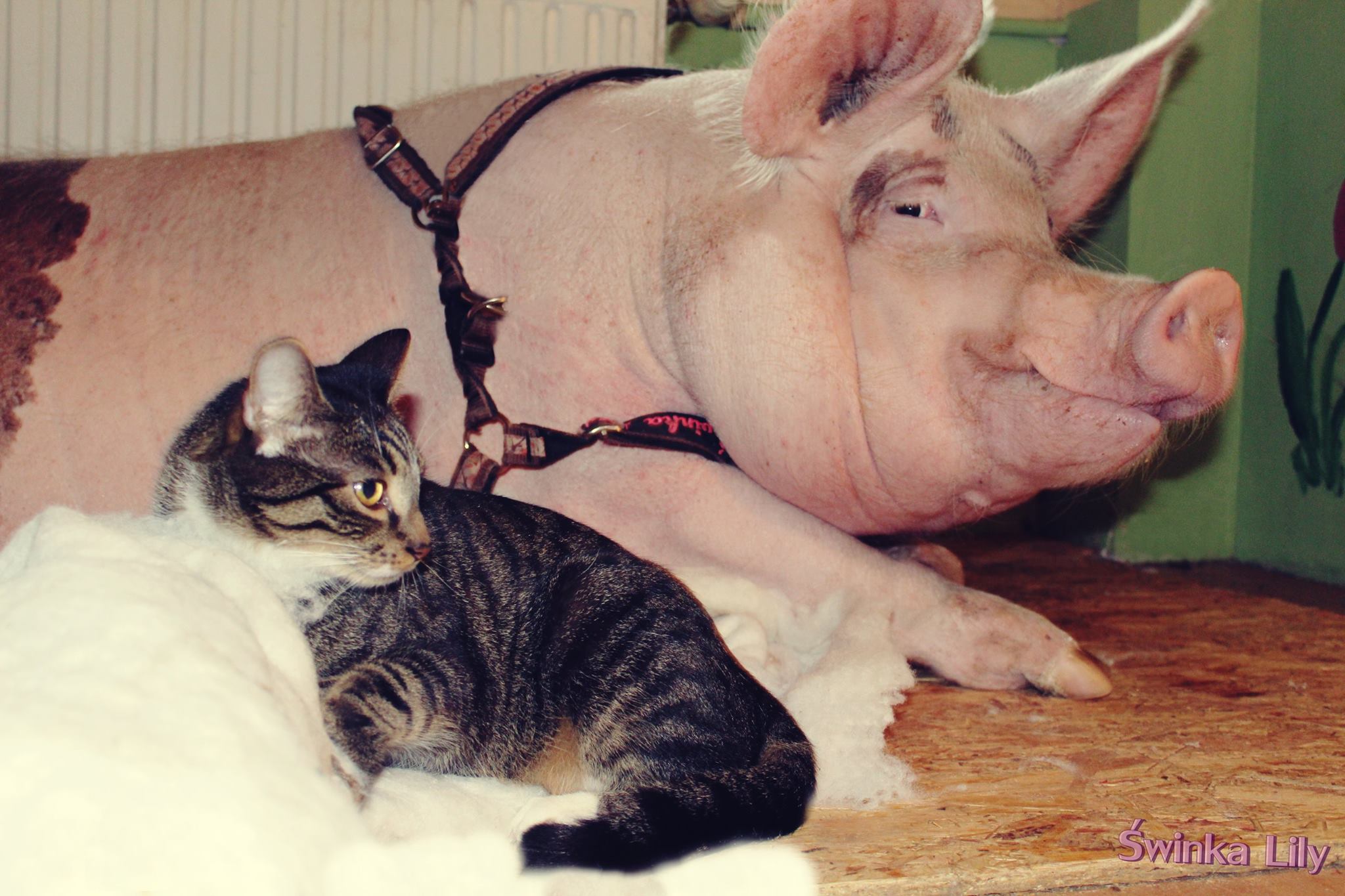 Ultimately though, Lily’s impact has gone way beyond her household alone. More than a curious novelty for the media and the public, according to the couple she has positively effected changes to thousands of lives.

“Before meeting Lily, most people think of pigs as a food source – but when they look this ‘food’ in the eye, it’s then that they realize pigs are so much more than something to eat. Like a cat or a dog, they realize this is a sentient being with the ability to think and feel.

“Over the seven years we’ve had with Lily, we’ve received not hundreds of messages, but thousands from people that have said that it is thanks to her story that they’ve since become vegetarian or excluded pork from their diet. Although it’s hard to say what people can ‘learn’ from Lily, she’s definitely helped open eyes and hearts.”