A stash of weapons hidden by Polish resistance fighters during WWII has been unearthed by history detectives following the discovery of a long-forgotten audio memoir.

The remarkable haul in Czchów, a small town lying 75 kilometres south east of Kraków, was found after the grandson of one of the partisans stumbled upon a cassette tape recorded nearly 40 years ago during a family celebration. 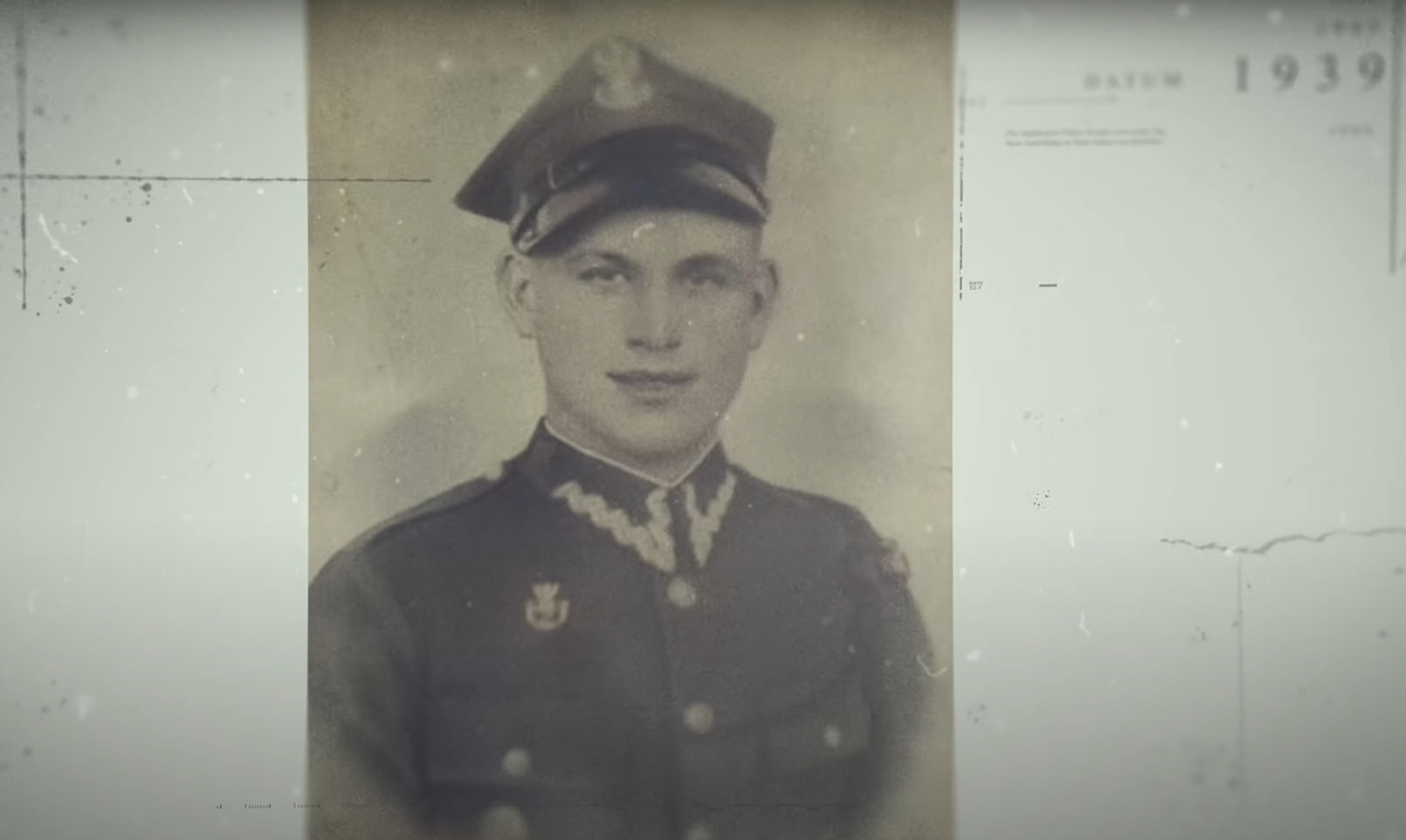 Franciszeck Staszczyk, a hero of the Battle of Bzura, buried the weapons to keep them from falling into the hands of the Red Army. He later recorded his memories on cassette tape.Wiesław Staszczyk/History Hiking/YouTube

On the recording, Wiesław Staszczyk’s now deceased grandfather Franciszek Staszczyk (a.k.a. Gwiazdor), is heard reminiscing about his time fighting for Poland’s underground.

Posting the discovery online, Wiesław said: “The fate of my family contains a certain story, sensational like a script for a good movie, but also a testimony to terrible times and incredible heroism. 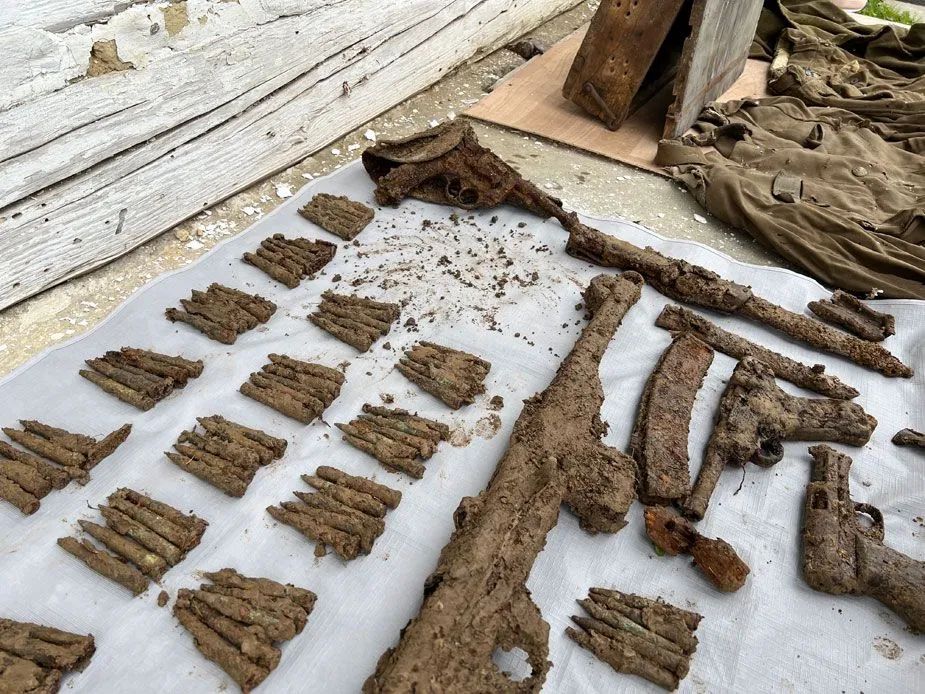 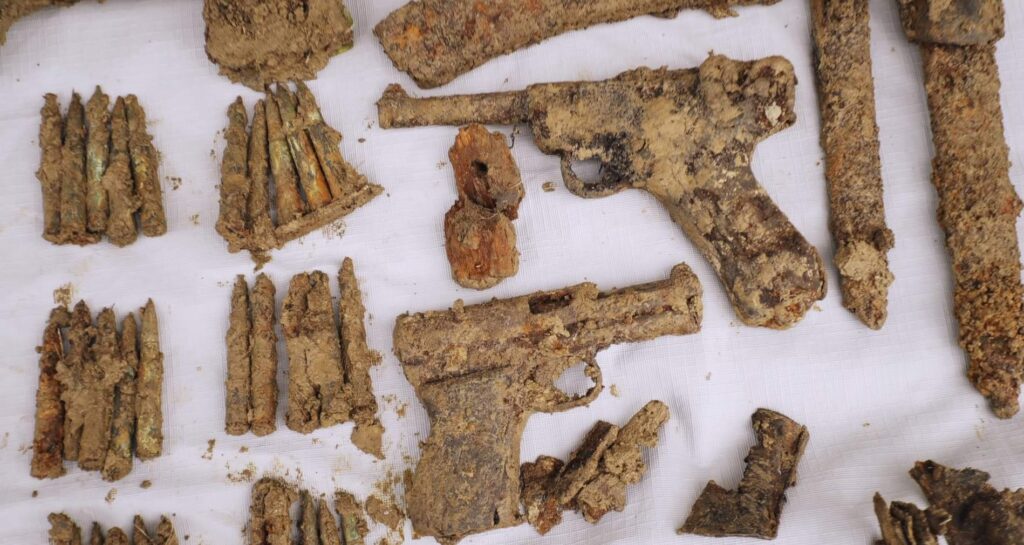 The haul of weapons included a Soviet manufactured PPS submachine gun; a French revolver dating from 1892; a 1939 Luger; a German Mauser; bayonets; a holster; a belt buckle; and 503 pieces of ammunition for the Mauser.History Hiking/YouTube

“A soldier in active service two weeks before switching to the reserve is surprised by the outbreak of World War II. He fights heroically as a scout of the 19th Lviv Relief Infantry Regiment, takes part in the Battle of Bzura, and on September 22, near Sochaczew, he is wounded.

“He goes through starvation in German captivity, from which he later escapes in a spectacular way and continues to fight as a Home Army soldier.

“This soldier is my grandfather, scout senior shooter Franciszek Staszczyk, whom I never met.” 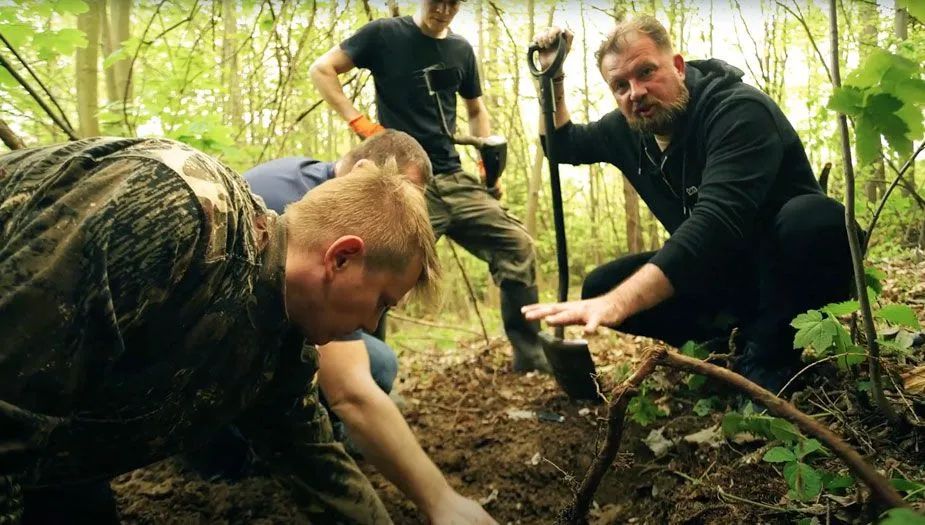 History Hiking YouTube channel set about investigating Staszczyk’s fascinating story and managed to track down a 97-year-old woman who led them to the site of the buried weapons.History Hiking/YouTube

He added: “The sound is of very poor quality, because the material was recorded during a family event, but nevertheless it is a treasure, incredibly vivid memories of an elderly man, told in detail, about which we will not read in the history textbook, which can only come from those who experienced those events.”

After handing the tape over to historical enthusiasts at the History Hiking YouTube channel, the team set about investigating Staszczyk’s story and tracked down a 97-year-old woman, Stanisława Sady, who had been married to one of the people mentioned on the tape.

Also active in the resistance, Sady (once known under the codename of Cyryla) distributed underground literature during the occupation, including the illegal newspaper Świt.

Interviewed in her home by History Hiking, she recalled witnessing Staszczyk, her fiancée Stanisław Sady (pseudonym Jeleń), his brother and a friend from their unit, burying the cachet ahead of the arrival of the Soviet army.

Rather than destroying the arms, or allowing them to fall into the hands of the ‘new invader’, the group instead buried them in woodland close to Sady’s cottage.

Working on this tip, and scouring the woods with metal detectors, the team discovered a motherlode of militaria. 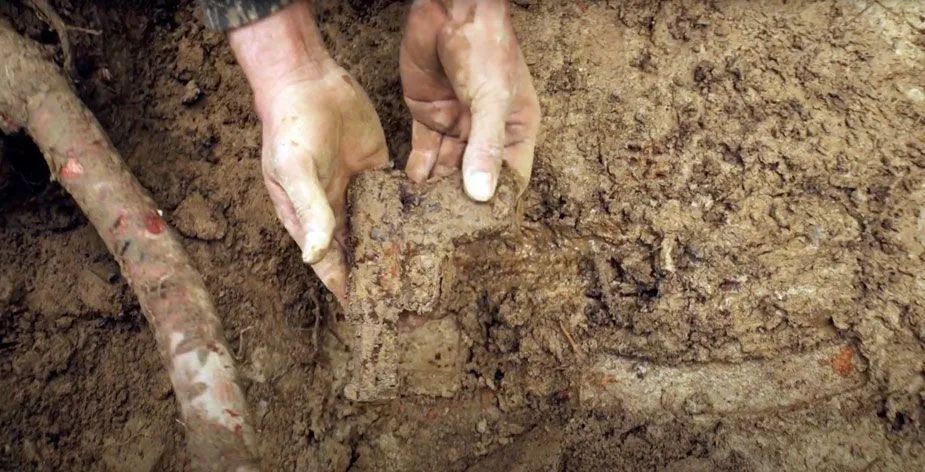 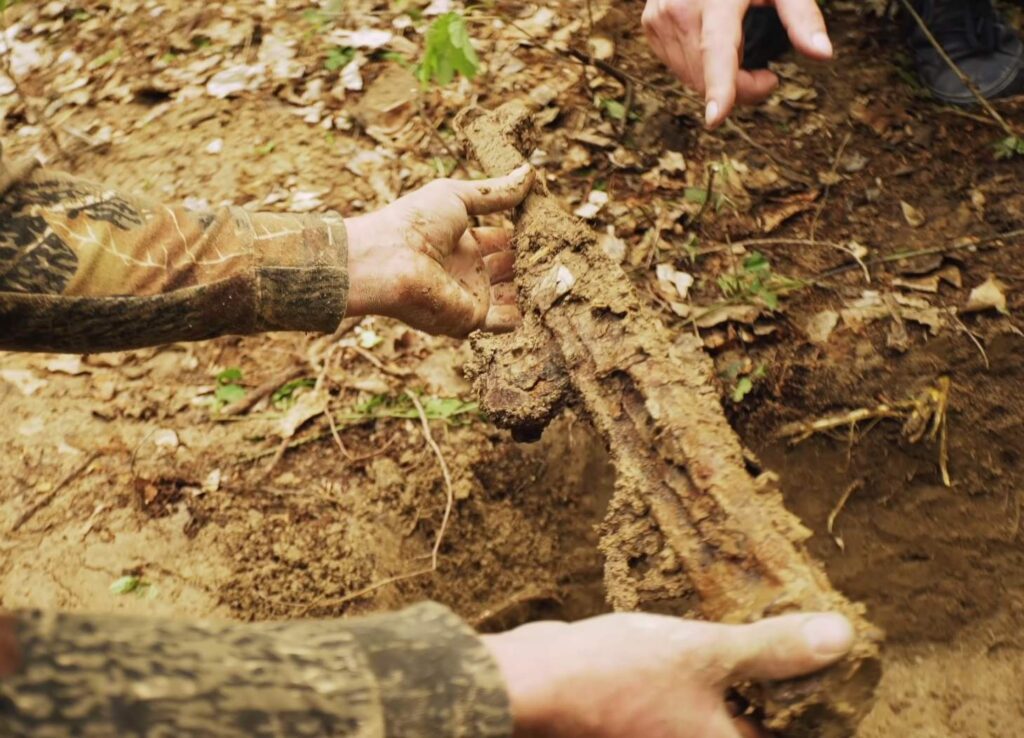 Scouring the woods with metal detectors, the team soon found themselves carefully digging the earth with trowels and hitting a motherlode of militaria.   History Hiking/YouTube

This included a Soviet manufactured PPS submachine gun; a French revolver dating from 1892; a 1939 Luger; a German Mauser; bayonets; a holster; a belt buckle; and 503 pieces of ammunition for the Mauser.

Łukasz Kazek of History Hiking said: “These are stories told by ordinary people, but their testimonies can lead to the discovery of exceptional finds – such as this partisan deposit from towards the end of WWII.”

Co-created in 2019 by Kazek and Mateusz Kudła, History Hiking has already amassed a huge following with 313,000 subscribers on YouTube.

In the case of Franciszek Staszczyk, that meant a cunning escape from Altengrabow POW camp, a period spent hiding in the forests, and a courageous attack on a German unit guarding those building a dam near Czchów.

The Home Army Museum in Kraków said it is now interested in taking ownership of the weapons for future display. 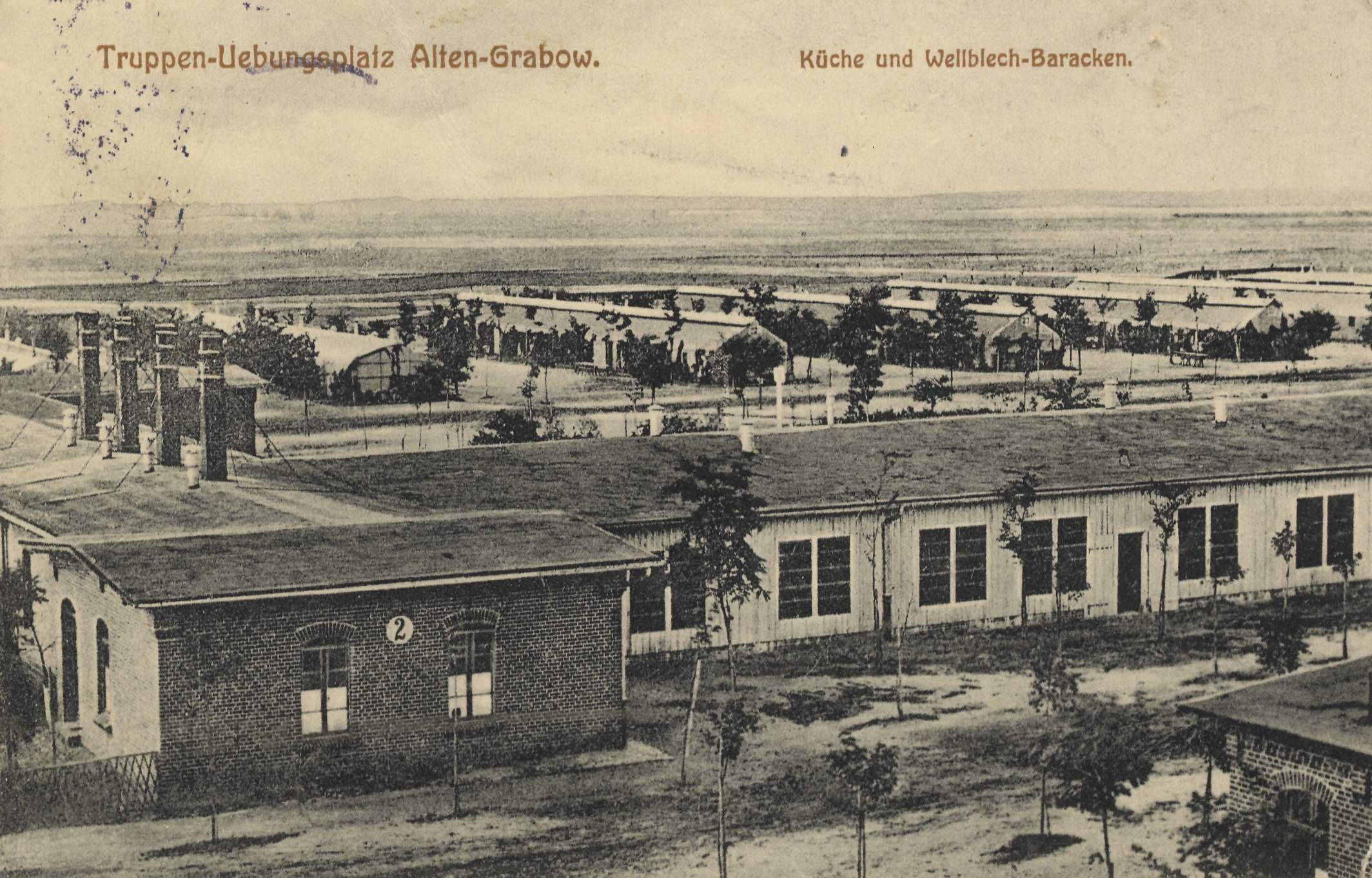 Franciszeck Staszczyk escaped from Altengrabow POW camp and forced labor in the Third Reich after wining a series of card games and donning ‘an elegant suit’.Public domain

In a statement published on Facebook, the museum wrote: “We would like to congratulate you on your successful search for a guerrilla deposit in Czchów.

“In the course of their work, they cooperated with the creators of the YouTube channel History Hiking. 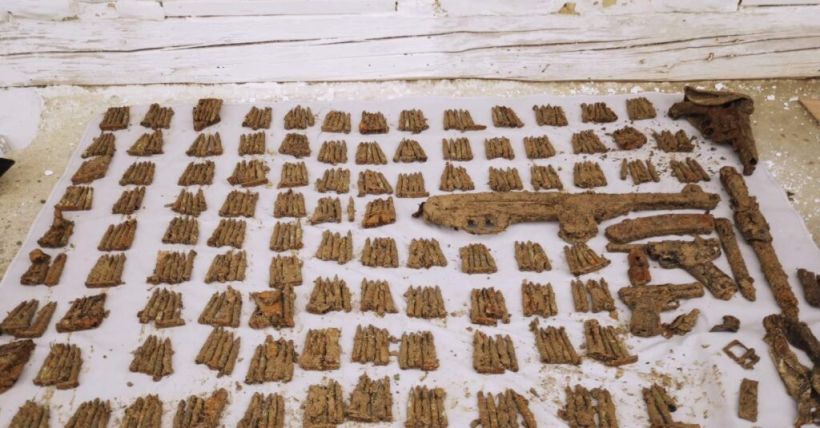 The Home Army Museum in Kraków said it is now interested in taking ownership of the weapons for future display.History Hiking/YouTube

“Simultaneously, we can confirm that the Home Army Museum in Kraków promises to include the discoveries that were made in its collection.

“We remain in constant contact with the Provincial Office for the Protection of Monuments who are responsible for the further fate of this special treasure from World War II.”