Documents uncovered by the Polish Press Agency (PAP) show that as a child the former Minister of Foreign Affairs Adam D. Rotfeld was on a list of people who received fake Paraguayan passports to help them escape the Holocaust.

As the Nazis carried out their systematic slaughter of Jews and Poles in occupied Poland, a small group of Polish diplomats in Bern, Switzerland, began falsifying Latin-American passports and smuggling them into the country with the help of Jewish organisations.

The group, known as the Bern Group, was led by the ambassador, Aleksander Ładoś, his deputy Stefan Ryniewicz, consul Konstanty Rokicki and diplomat Juliusz Kuehl.

At least two Jewish organizations provided lists of people who needed travel documents. The Jewish rescue committee RELICO in Geneva and Zurich rabbi Chaim Eissem, together with the Polish embassy, procured and fabricated passports from countries such as Paraguay, Honduras, Peru, Salavador, Bolivia and Haiti.

The illegal passports were paid for by the Jewish groups, while the Polish diplomats acted as the middlemen, giving bribes or producing the fake passports. All the Paraguayan documents prepared by consul Rokicki were backdated to December 1942.

Now PAP has uncovered a letter dated November 14, 1942, addressed to Rotfeld’s father offering him and his entire family Paraguayan citizenship.

Adam Daniel Rothfeld (whose name was changed after the war to Rotfeld) was born on March 4th, 1938 in Przemyślany near Lviv. His parents, Leon and Berta Rothfeld had Jewish roots.

When the Second World War broke out, his grandparents dug a hole under the kitchen floor, covered by a piece of tinware. The Germans would burst into houses, pierce the floors with long rods and listen for any sounds. “I could hear their steps and voices. The adults were promising me the moon, just as long as I didn’t cry” – Rotfeld told the Cracow-based magazine “Znak”.

In the letter discovered by PAP, it reads:  “Dear Doctor, I have the honour to inform you, that based on the efforts of your relatives, both you and your family were granted Paraguayan citizenship.

“We request you provide two photographs and personal information of each member of the family as soon as possible, so that we can send your passports.” 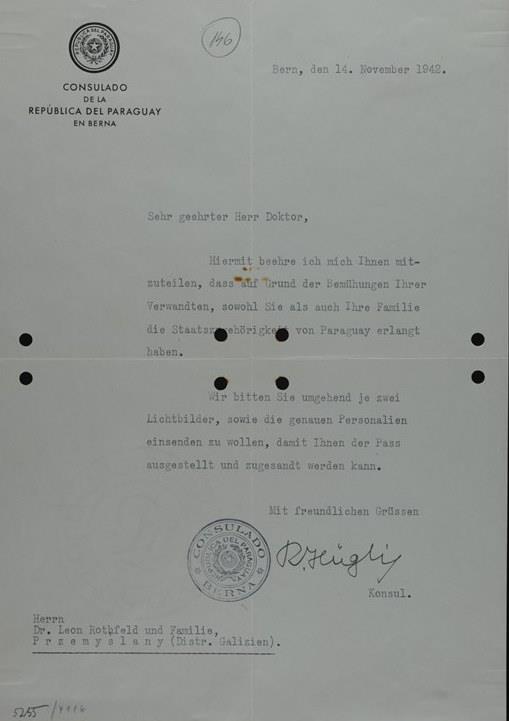 In an interview with PAP, Rotfeld described the news about his family receiving Paraguayan passports as a voice from beyond the grave. “There is no doubt that the people who undertook these actions were hoping they could help. I suspect the letters addressed to my father reached us. Only he was already dead at that time. I thought, it was so close for my father and my whole family to be saved.”

He added he thought the behaviour of Polish diplomats during the war was “noble and selfless, deserving the highest recognition.”

But he admitted: “It was a different case with the Paraguayan side, which saw it as an opportunity of earning large sums of money.”

The passports obtained by the ‘Bern group’ were a lifeline for their Jewish countrymen, yet no one could guarantee their effectiveness. This was the tragic case of Dr. Leon Rothfeld, who was killed by the Germans in 1943 before the passport reached him. It is suspected Ukrainian neighbours reported him to the Nazis.

Only his older sister and he, out of the whole family, survived the war. At the end of 1941, Rotfeld found shelter in the Greek catholic monastery in Uniowo, where he was christened and hidden under the name Daniel Czerwiński.

Out of the ashes: new exhibition highlights Warsaw’s Muranów district, once the centre of Warsaw’s Jewish life, and once reduced to rubble