It’s raining, dark and slippery. One false move, a misstep or suchlike, will take Natalia plunging eight floors onto the pavement down below. The stakes are high, and the consequences potentially fatal, but for Natalia, the reward outweighs the risk – inching her way around a conical roof slicked in rainwater, a fire escape on the other side will take her inside her target: an auction house that’s sat abandoned since 1937. This is her grail.

Natalia, who prefers to keep her full name a secret, is an urban explorer, part of a mysterious subculture that has blossomed to become a modern day phenomenon. “It’s not a safe hobby,” she admits, “and people can get seriously hurt or face legal problems, but I’m a good planner and a composed person.” 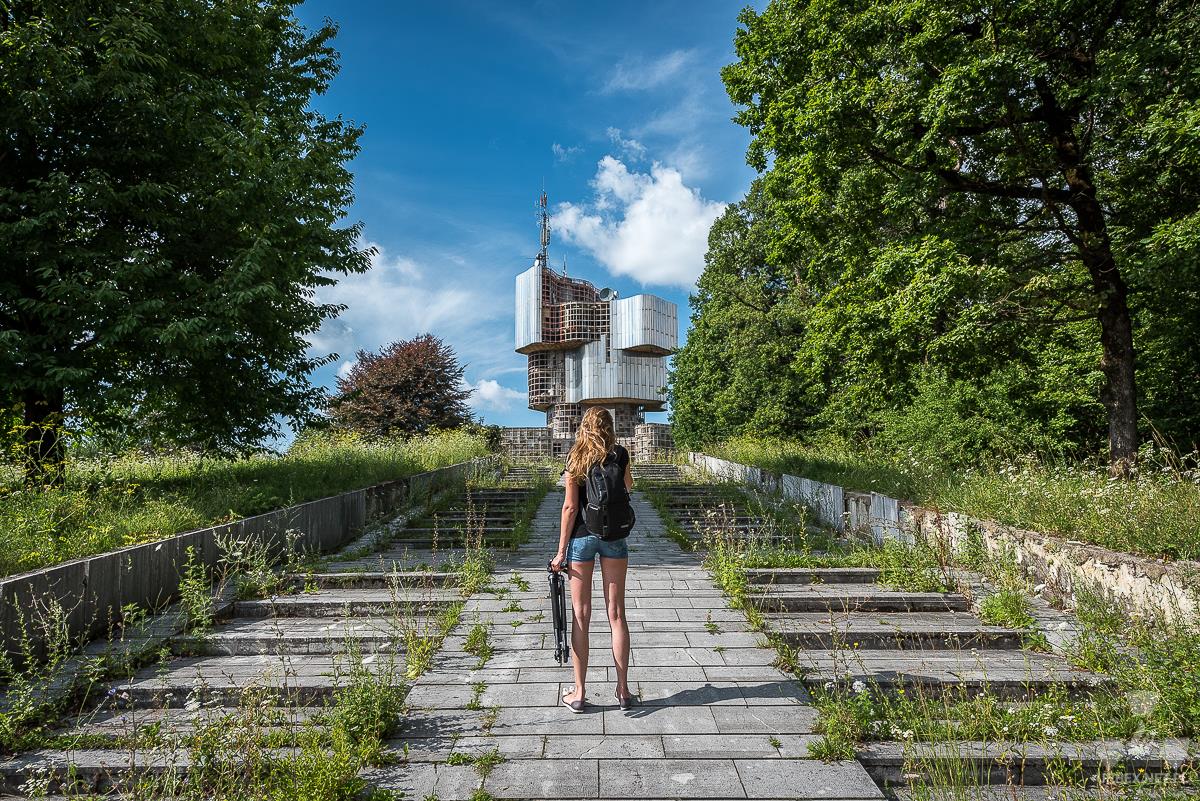 Born from teenage rebellion, Natalia’s fascination with forgotten buildings began when her family moved for the umpteenth time.Natalia

Attracted by the haunting beauty to be found in urban decay, for Natalia, a 27-year-old HR worker originally from Katowice, her obsession with exploring the derelict and decrepit has, so far, taken her to twenty-two countries and into the darkest depths of some of the world’s most extraordinary structures. Documenting these adventures on her blog, Dead Inside, her stunning images reveal the strange, secret worlds that have been trapped in time. 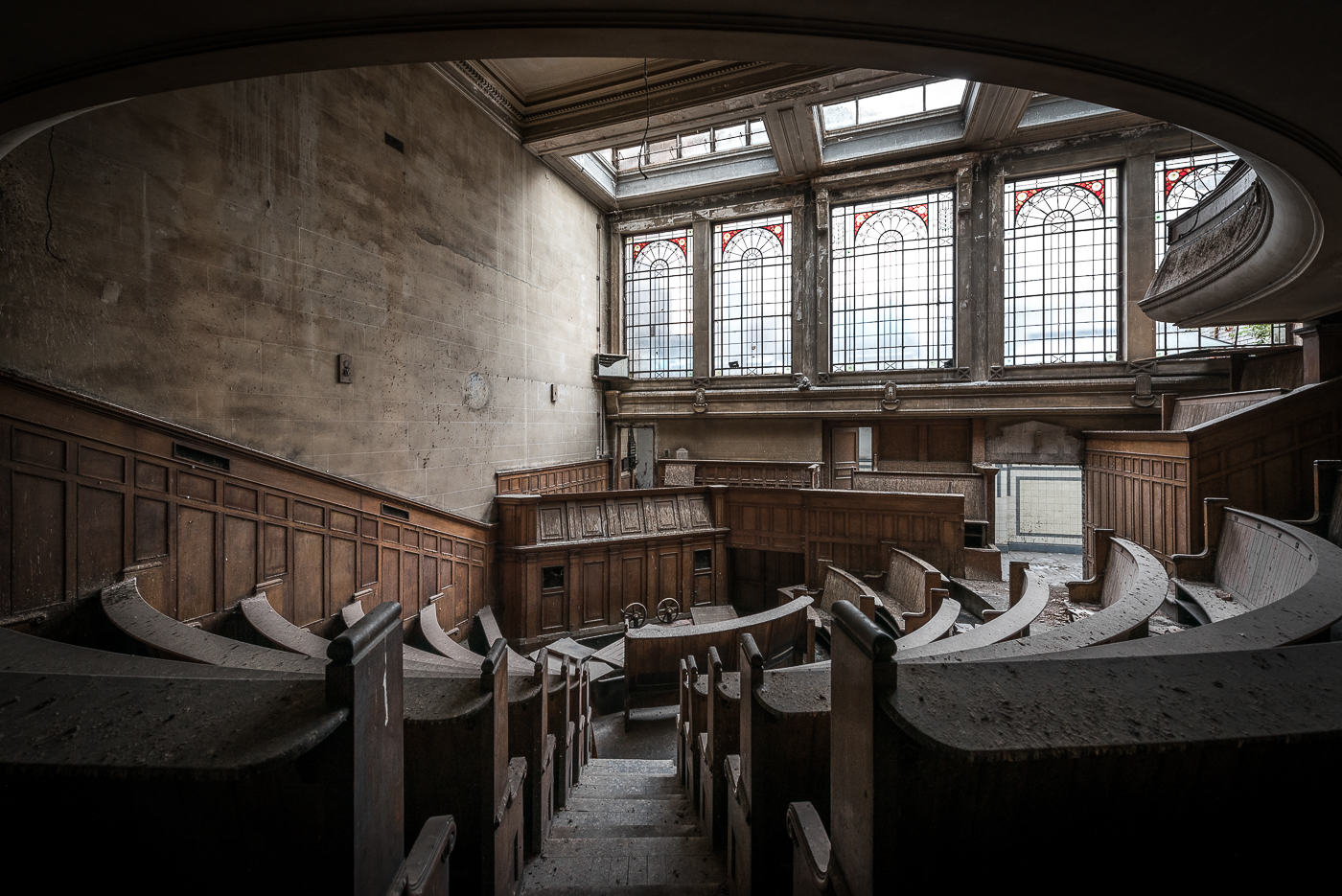 “It’s not a safe hobby,” admits Natalia. Pictured is an auction house that she has entered after scaling eight floors of scaffolding.Natalia

Born from teenage rebellion, her fascination with the forlorn and forgotten began when her family uprooted for the umpteenth time. “We moved to a new place,” she remembers, “and for myself, as a teenager, it was a complete disaster – it was the hundredth time I’d had to change friends and I didn’t know anyone. I needed something to do but there was absolutely nothing: of course, as befits a rebellious young woman I truanted as often as possible, but, where could you go when there was nowhere that interested you? Well… I discovered there was something after all. Abandoned places. And that’s how it all began.” 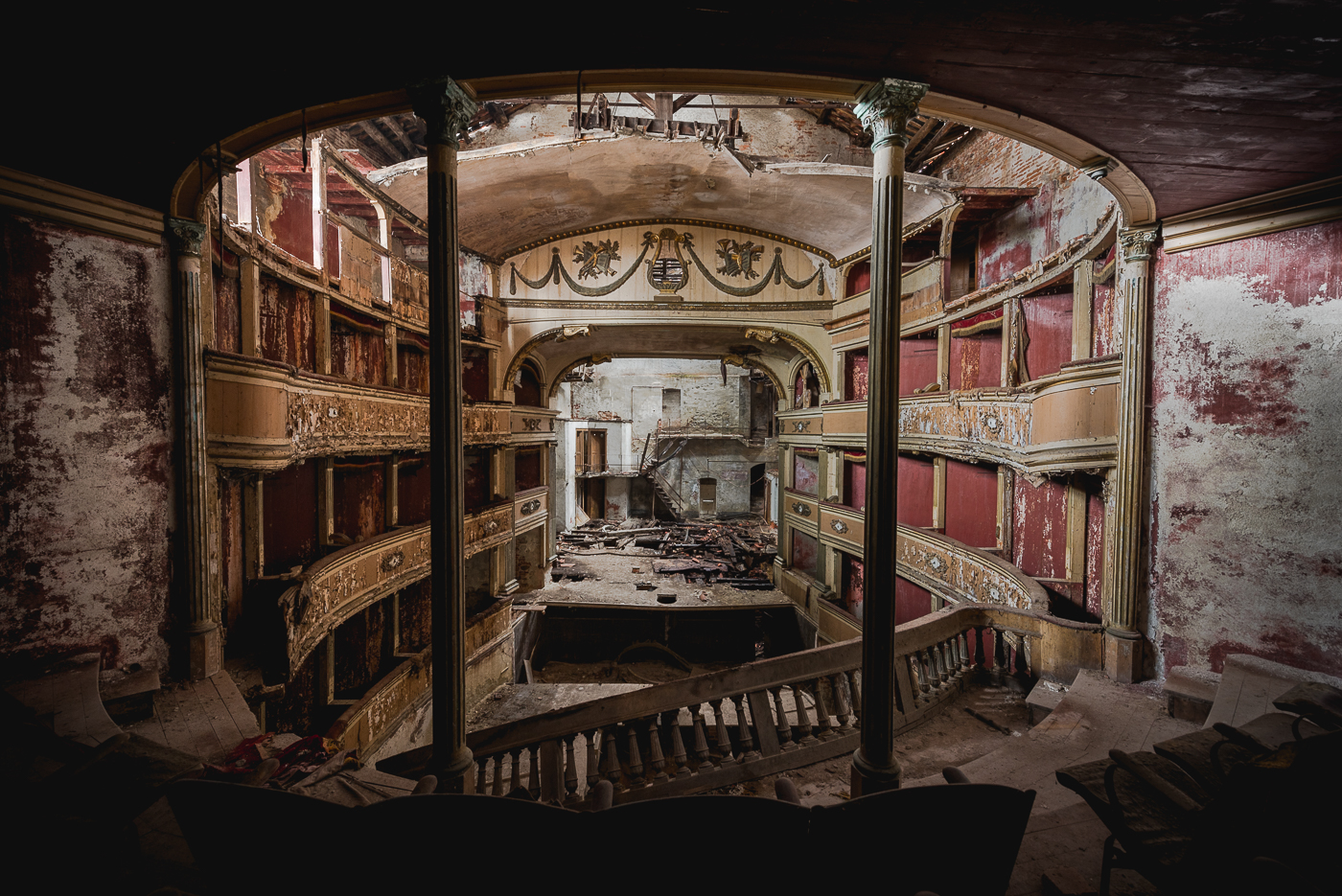 Natalia’s obsession has taken her to twenty-two countries, in this case a one-time theater in Italy.Natalia

This was not a fleeting addiction. “By 2014 I began taking photos on my phone and, in 2015, created a fan page on Facebook,” she says. “Around the same time,” she continues, “I learned about ‘urbex’ and saw that I wasn’t alone. Furthermore, I also saw that people were taking great photos of the kind of places I was exploring and that served as my inspiration for taking the next step and getting a camera.” 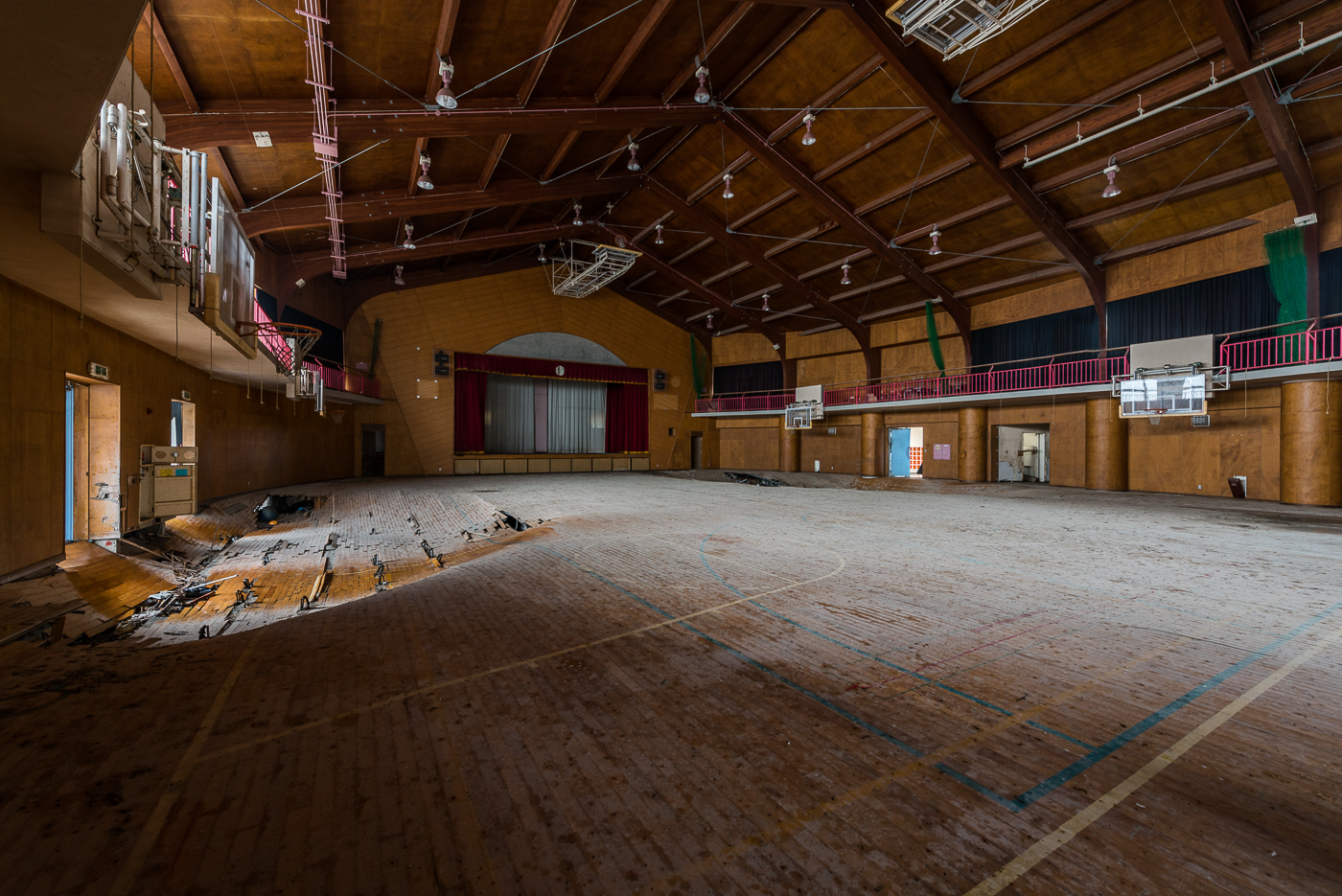 “The most traumatic place I’ve ever visited,” is how she describes this school inside Fukushima’s exclusion zone.Natalia

Ethereal and enchanting in equal measure, the pictures taken by this self-taught photographer capture both the thrill and mystery of entering the unknown. “There’s a real sense of calm that comes with exploring,” she says. “It’s always very silent with the only sound coming from the camera clicking. After the adrenaline surge of entering somewhere, it’s both exciting and satisfying to then see the beauty of a place really unravel before you.” 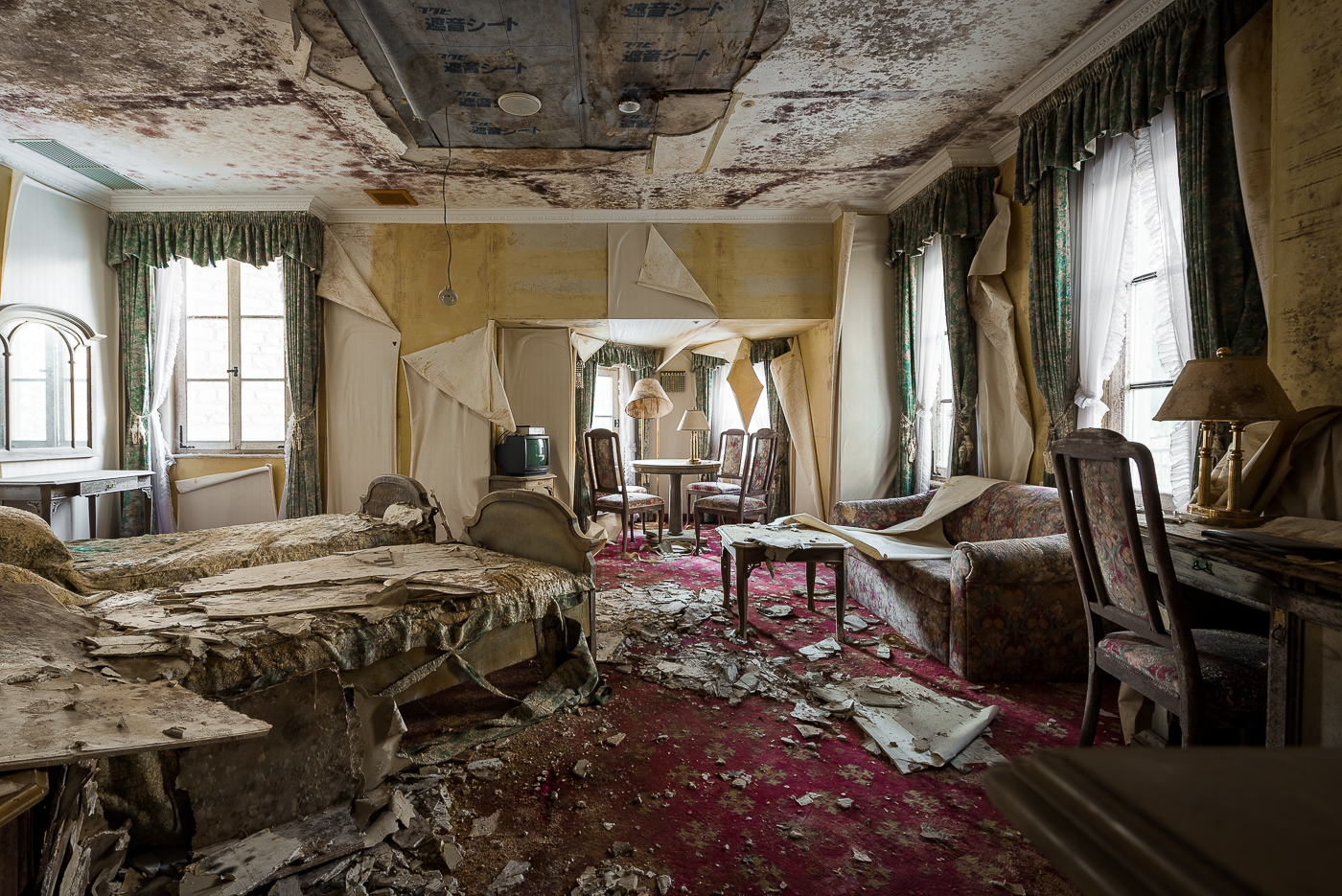 Reaching this Japanese hotel took two hours of crawling over snow. “It was worth every moment,” she says.Natalia

Some locations have left a bigger impact than others. “The most traumatic place I’ve visited,” she recalls, “was a school in the Fukushima exclusion zone. It was an unbelievably sad experience knowing that seven years ago it had been at the heart of a busy city – you can’t imagine what a terrible feeling it was realizing that all the buildings and life around it had been swept away by the tsunami.” 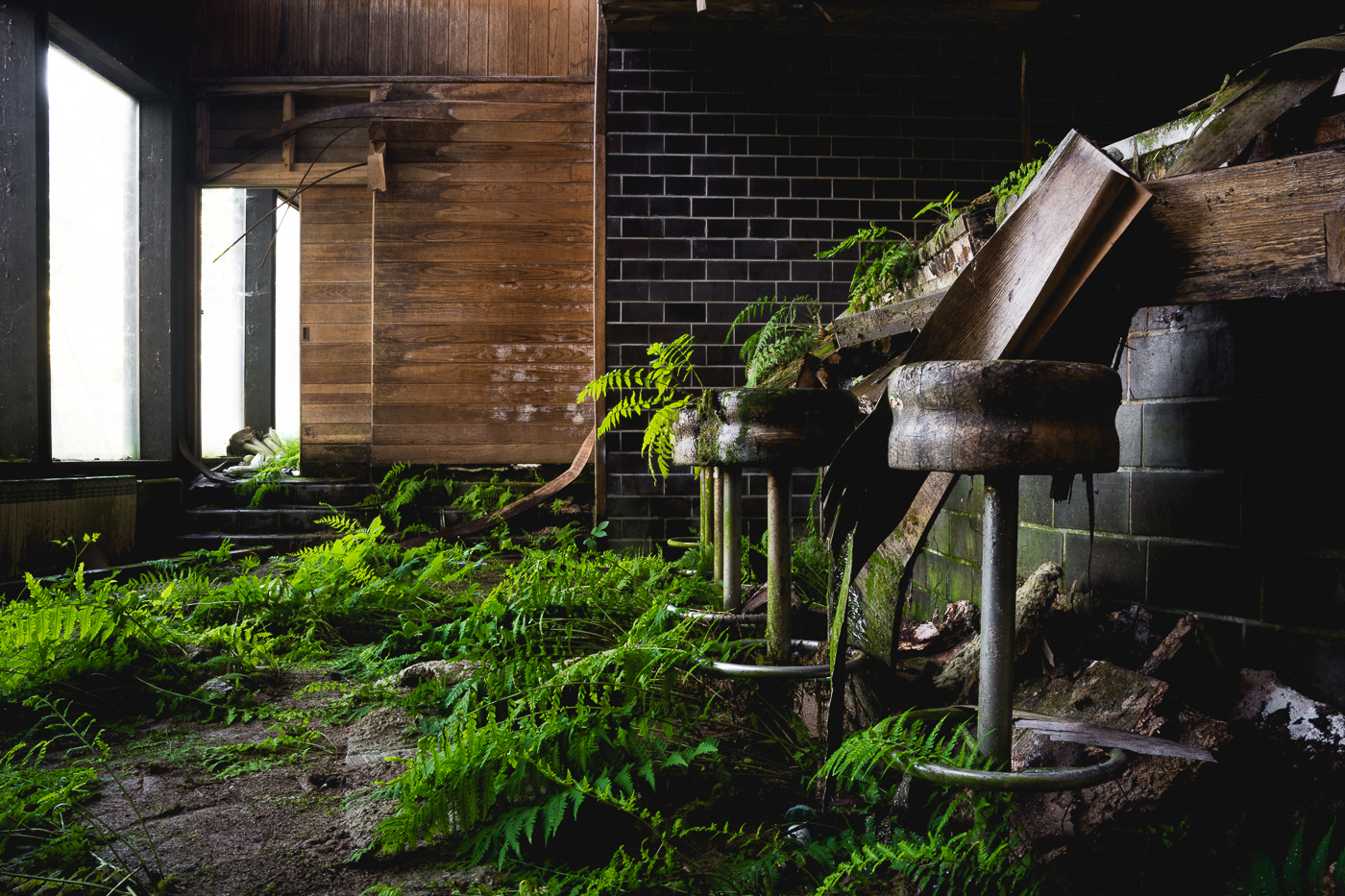 “There’s a real sense of calm that comes with exploring,” says Natalia. Pictured is an abandoned school in Croatia.Natalia

She confesses, also, to being creeped out after discovering human bones lying inside an attic in an abandoned Italian villa, though is adamant that any strange, inexplicable events are usually the work of overly imaginative bloggers. “Abandoned places aren’t haunted,” she laughs, “I think that’s more a marketing trick YouTubers like to use to gain extra views.” 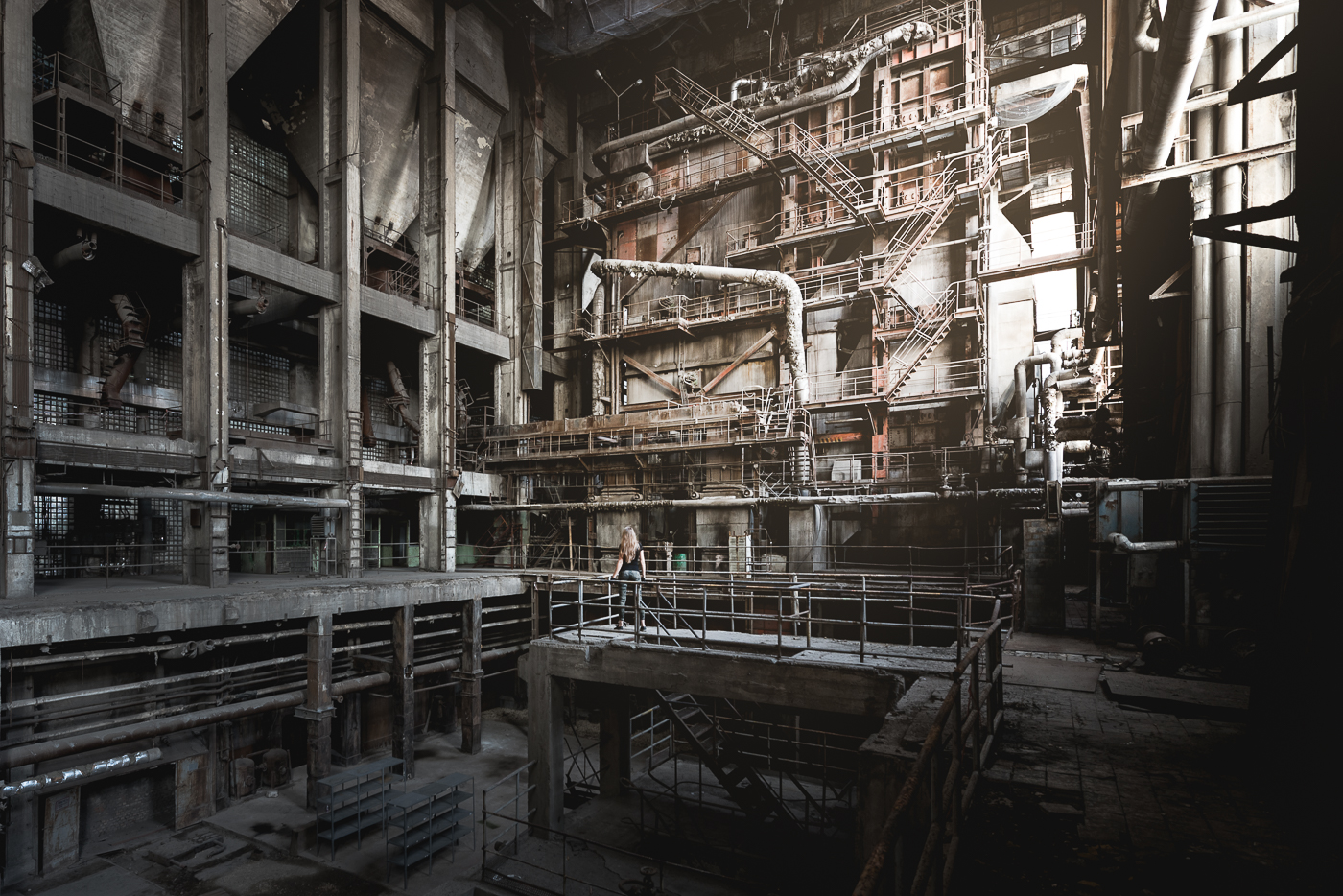 The pictures presented on her blog capture the thrill and mystery of entering the unknown.Natalia

For Natalia, the hazards are more physical than spiritual, and she tells of a time that she and her fiancé crawled for two hours on their stomachs to reach a Japanese hotel and amusement park. “There was still a few metres of snow and we couldn’t walk on it in case it collapsed,” she says. “We knew we weren’t going to get the chance to revisit Japan any time soon so we decided to spread our body mass on the ground and cover the 500-metre distance flat on our bellies.” 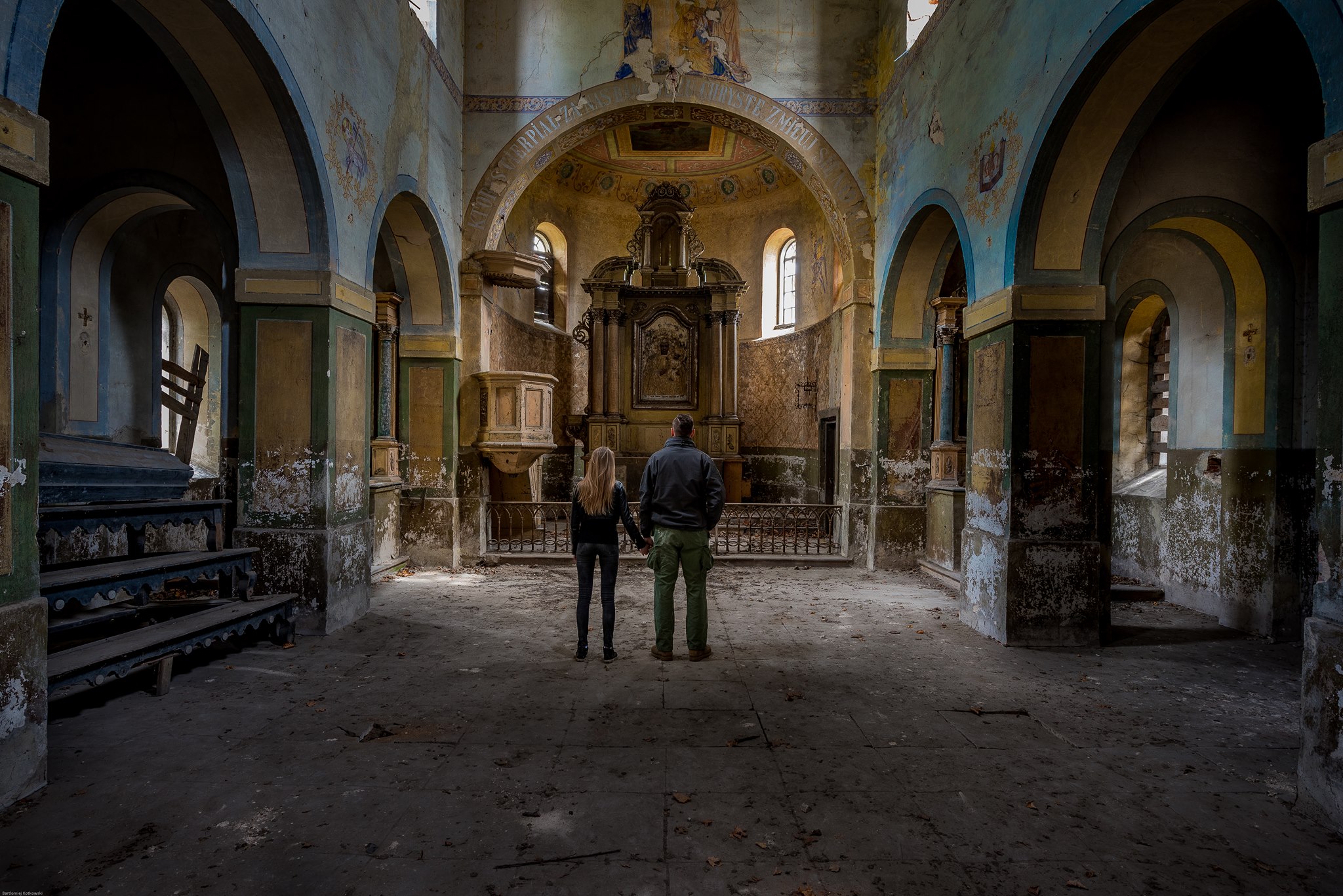 Usually, Natalia travels with her fiancée. “Exploring with friends is fun,” she says, “but we prefer romantic trips by our own.”Natalia

It was, she states firmly, worth every moment. “We were frozen, wet and exhausted, but it was absolutely the most wonderful hotel that I’ve ever managed to see.”

The physical aspect aside, problems with the law are an additional recurring theme. Having once strayed onto a military area in Montenegro to check out some abandoned ships, Natalia and her partner found themselves swiftly apprehended by the Navy. “They didn’t really know what to do with us, so they kept us on their boat for a few hours before letting us free,” she recalls. “Fortunately I’m kind of blonde so it’s much easier for me than it is for my fiancée!” 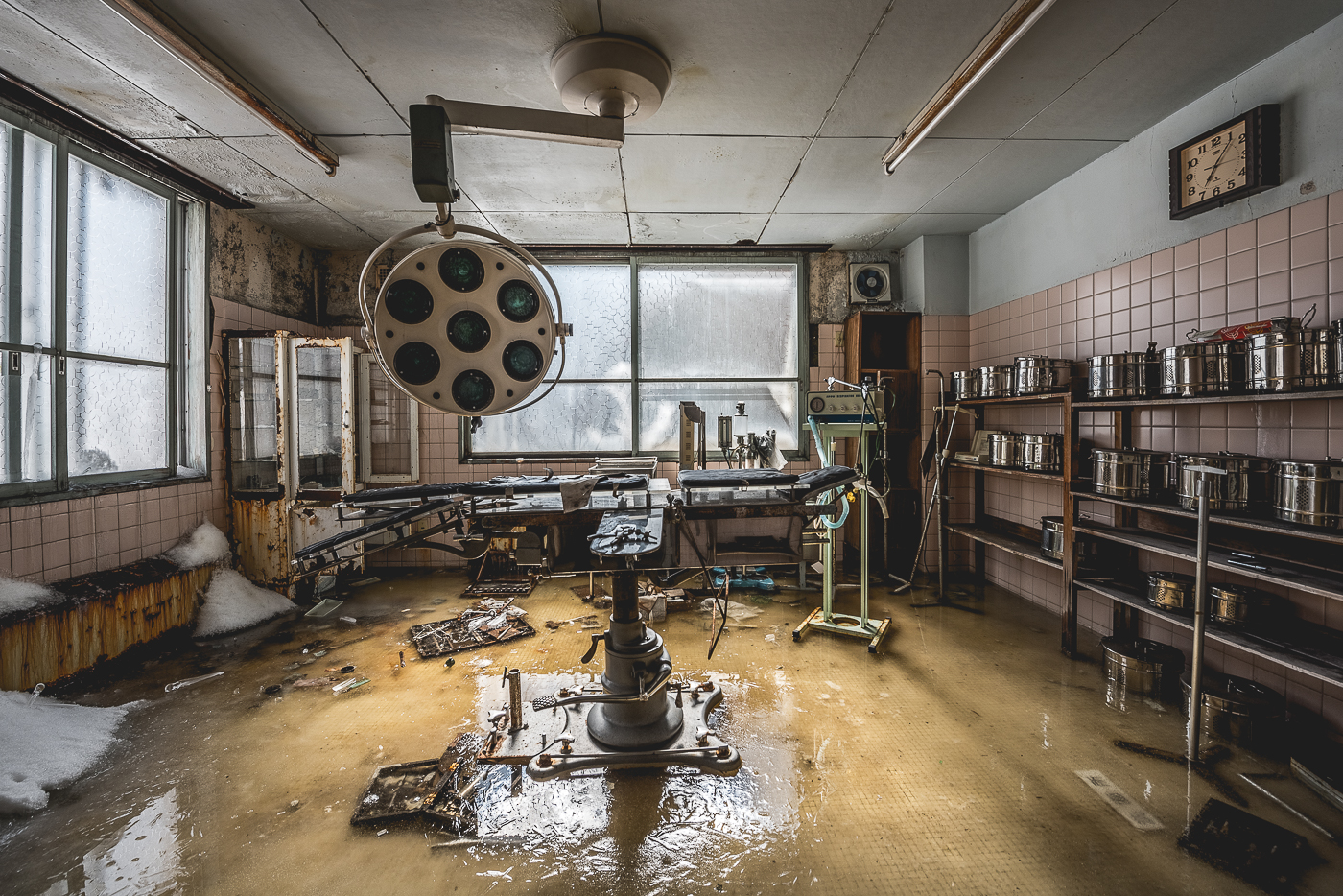 A Japanese hospital, untouched for 50 years.Natalia

Typically travelling with her partner, Bartek (“Sometimes we bring friends,” she says, “but our preference is romantic trips on our own”), each expedition is a complex affair requiring plenty of careful planning. “It takes a lot of time getting it right,” says Natalia, “for example, when we visited Japan we were researching it for five hours a day in the two months leading up.” 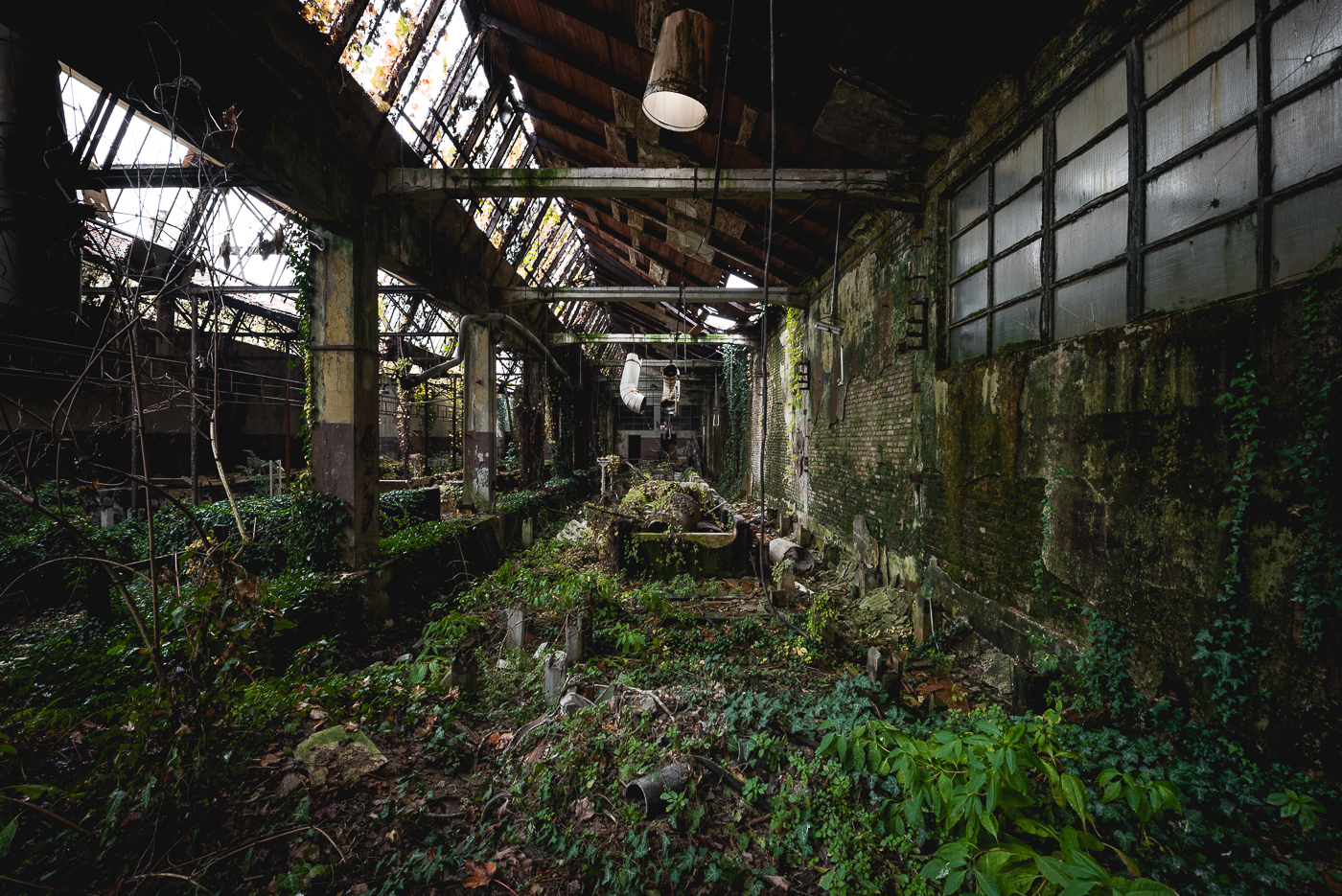 Where possible, Natalia uses natural light to demonstrate the contrasts between nature and decay.Natalia

This, however, proved the trip of a lifetime and a zenith of sorts. “I love Italy for its architecture, amazing villas and decaying churches,” she says, “but Japan was something else entirely. Over there, people don’t destroy things, they don’t steal, so the places you enter have only really been touched by nature and time, for example, it was incredible to find bottles of medication lying around a hospital that had been empty for half a century.” 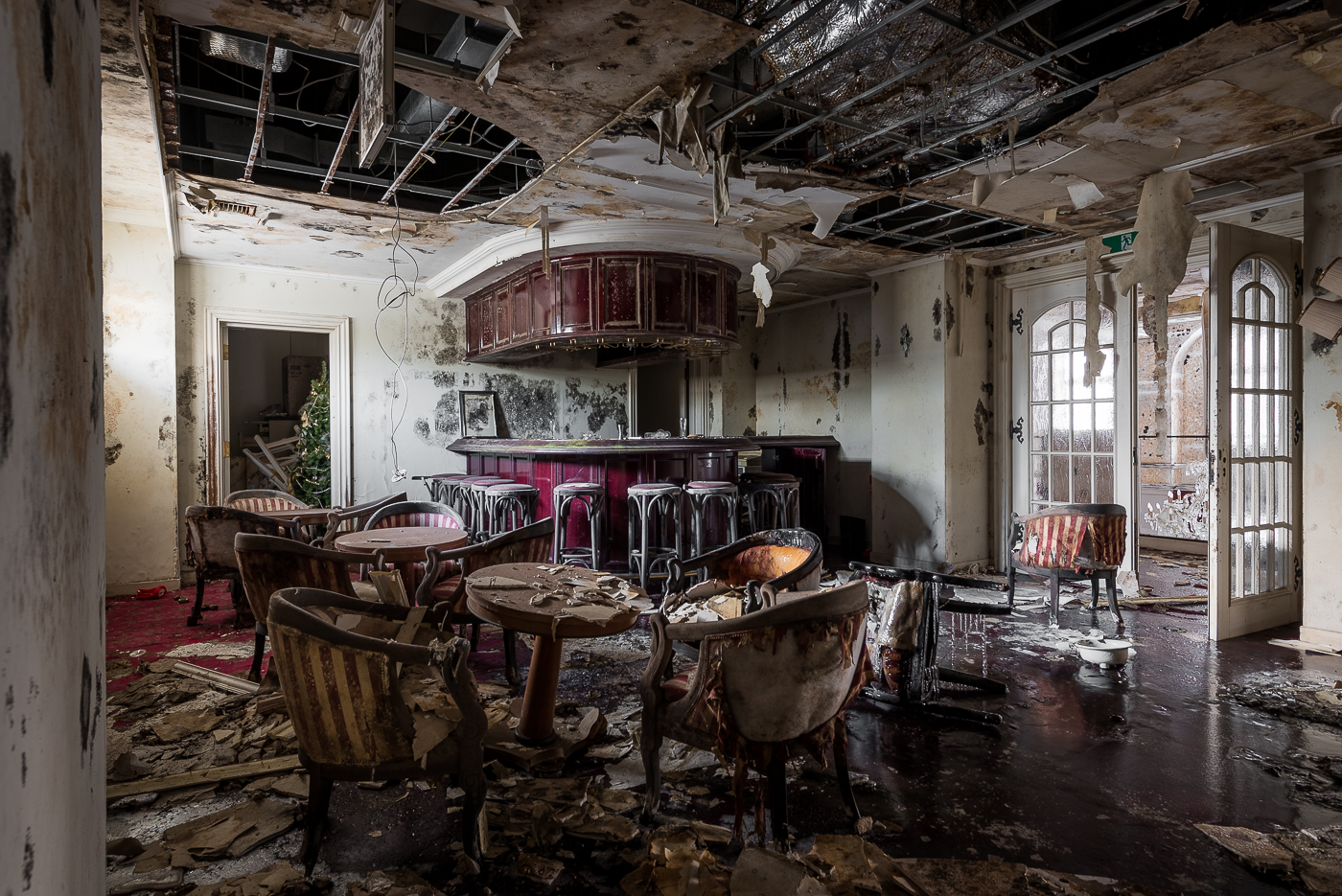 “When people see my photographs,” comments Natalia, “I think they come to understand what motivates me to do this.”Natalia

Using natural light where possible to best illustrate the contrasts between nature and urban decay, Natalia’s photographs have struck a deep chord for their sensitive mood and atmospheric depth. Saliently, they have also served as the best possible retort to people that are befuddled by her unusual choice of pastime. “When people see the photographs,” she says, “I think they come to understand what motivates me to do this.”

On the 40th anniversary of martial law being imposed, TFN meets Chris Niedenthal, the man whose photography came to define it