A 450-year-old oak tree called Wincenty has been saved after firemen scrambled into action following reports of it being set on fire.

Receiving the call in the early hours of Thursday morning it took fire crews several hours to put out the blaze that was threatening to engulf the venerable oak.

The tree in the village of Krościenko Wyżne, south-east Poland, is a natural monument protected by the law.

When firemen arrived at the site they were greeted by a pillar of smoke coming out of a crack in the tree’s truck. 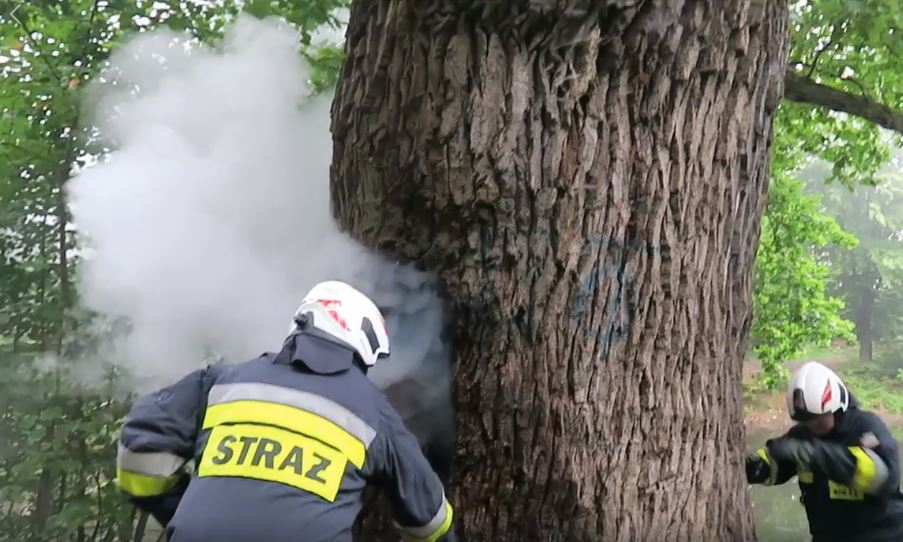 Receiving the call in the early hours of Thursday morning it took fire crews several hours to put out the blaze that was threatening to engulf the venerable oak.Regionalna Dyrekcja Lasów Państwowych w Krośnie/Facebook

Posting on Twitter, a spokesman for the Regional Directorate of State Forests in Krosno said: “This morning, the monumental 450-year-old oak "Wincent" was burning in the Dębina forest in # NadleśnictwoDukla.

“Thanks to the quick action of the friends of the Volunteer Fire Department from Krościenko Wyżne, the fire was quickly extinguished.

“According to foresters, the tree was probably set on fire at night, just like in 2015.” 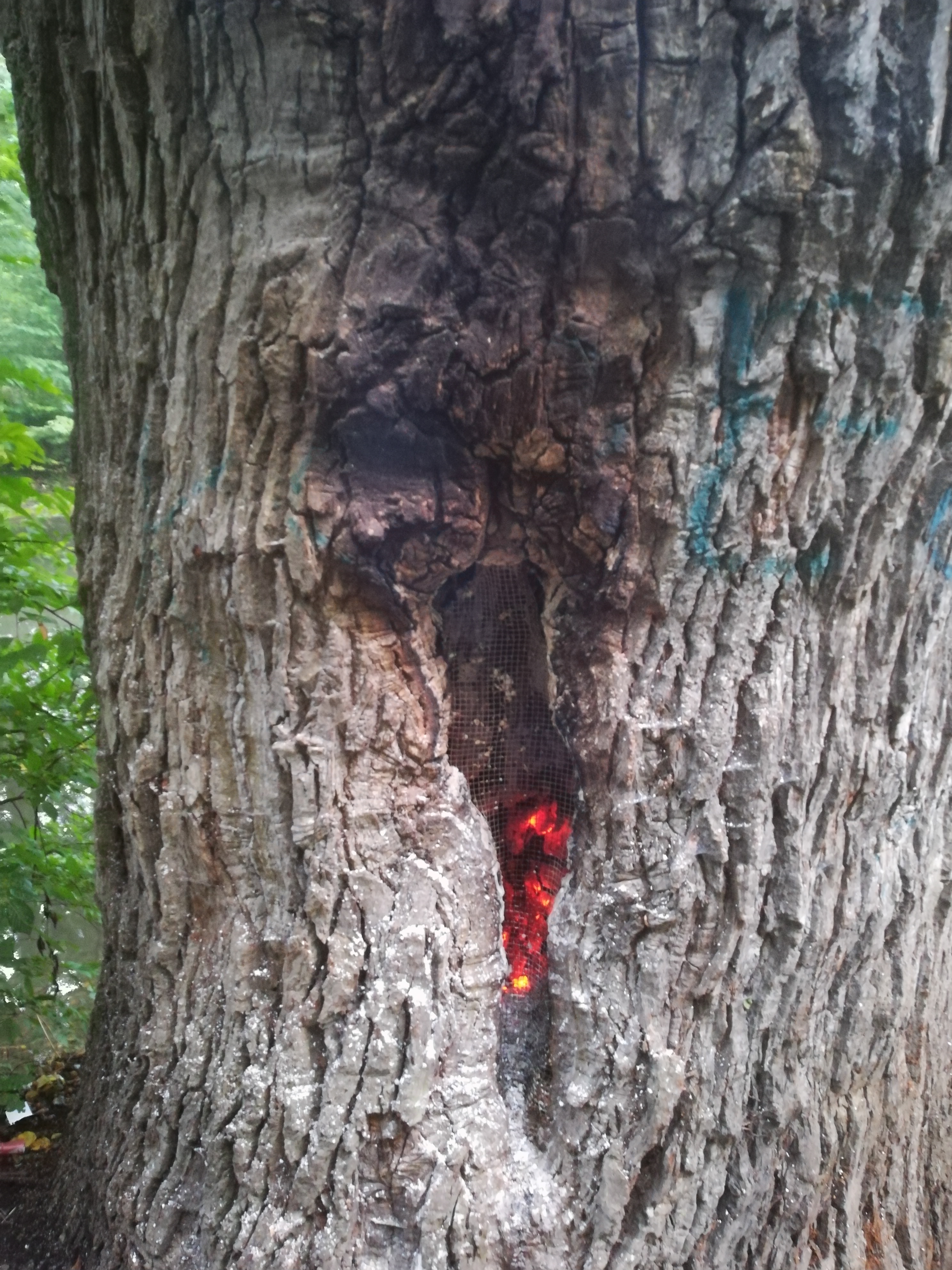 Arsonists are suspected of having set the tree alight.Edward Marszałek/ lasy.gov.pl

Five years ago, a woman taking a walk noticed smoke coming out of the tree’s hollow. Thanks to her quick reaction, the firemen got there in time to save the tree. To prevent similar incidents, the hollow was secured with a net.

Zbigniew Żywiec from the Dukla Forest District said: "Back then, the fire was extinguished and the oak was subjected to conservation procedures.

“Let's hope that this time the temperature created by the fire won’t kill the living tissue of the tree and we will still be able to enjoy the view of one of the oldest oak trees in the Polish forests." 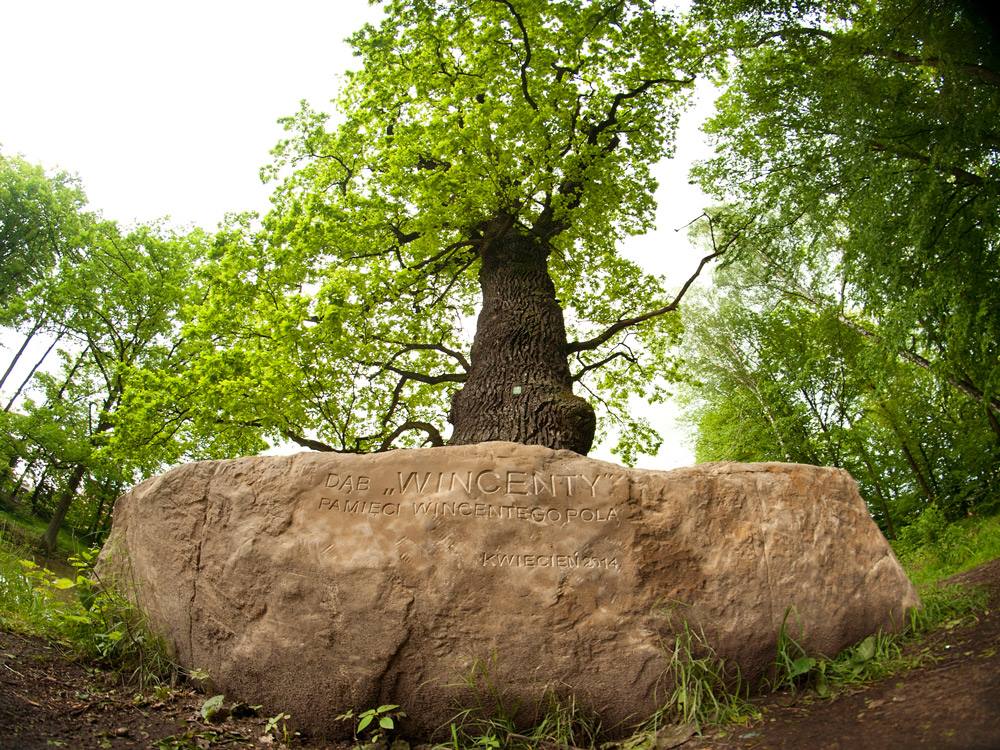 The 450-year-old oak was declared a national monument in 1966.Klub Gaja/Facebook

Standing close to a parking and forest path, the 28-meter-tall Wincenty has a circumference of 5.5 meters and was declared a national monument in 1966.

Due to an initiative by a local cultural association, the elderly oak received the name Wincenty in 2004, after the poet Wincenty Pol.

It is said, that the author used to sit under a tree to write his poems, including one titled “Royal Oaks” (Królewskie Dęby). 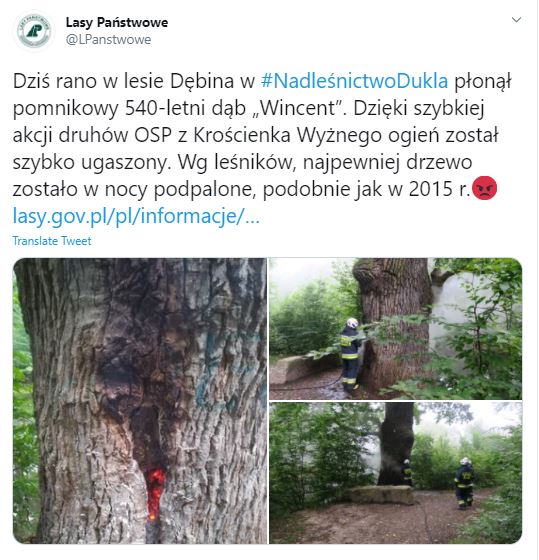 Posting on Twitter, a spokesman for the Regional Directorate of State Forests in Krosno said that Wincenty had been saved and revealed that this was the second time someone had attempted to set it on fire.Lasy Państwowe/Twitter