Officially opened on December 5th, 1975, and regularly dividing opinion ever since, today marks the 45th anniversary of one of Warsaw’s most iconic landmarks of the PRL era: Dworzec Centralny.

Originally commissioned in 1972, the construction team were initially handed a ten-year deadline to complete their work, however, this was dramatically shortened to 1,100 days after it was announced that Leonid Brezhnev would appear at the Polish United Workers’ Party seventh congress to be held in Warsaw in 1975. 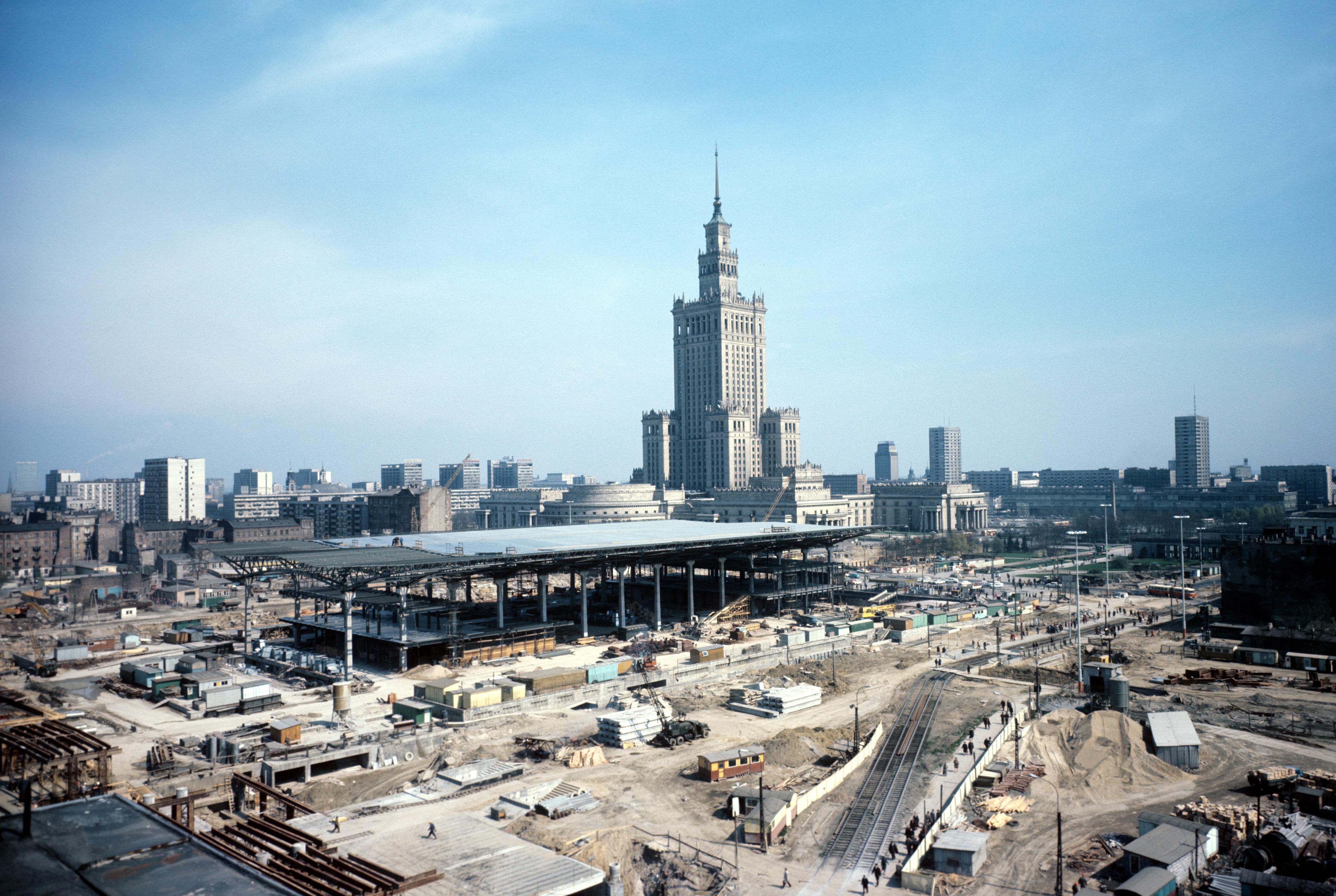 Construction did not always go smoothly – on the first day of work it’s said that just 23 labourers turned up.Mariusz Szyperko/PAP

Not only would a finished central station showcase Poland’s engineering ability to the Soviet leader, it was deemed absolutely necessary to deliver the project on time for reasons more prosaic – notorious for his fear of flying, from the outset it was apparent that Brezhnev himself would arrive using the station.

Matters didn’t get off to the most auspicious of starts when just two excavators and 23 mainly unskilled labourers showed up for the first day of work; according to anecdotal evidence, its said that their numbers were hurriedly supplemented by passers-by that volunteered their services. 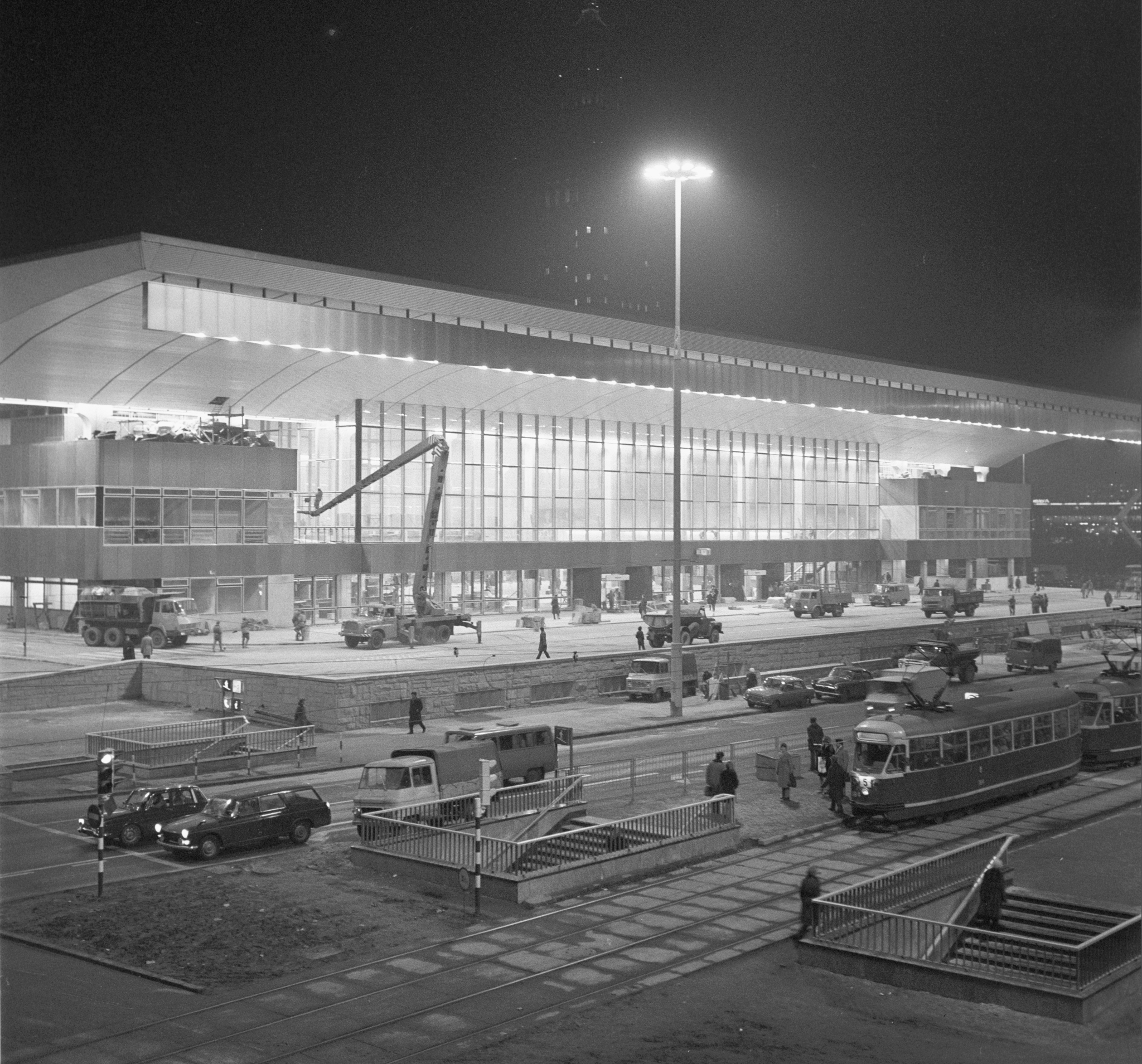 As the station readied itself to open, soldiers were drafted in to complete last minute tasks.Witold Rozmysłowicz/PAP

If time was in short supply, finance was not.

“Prime Minister Jaroszewicz said to me, ‘don’t worry about funds, we’ll give you whatever you need’,” the chief architect, Arseniusz Romanowicz, recalled.

As another architect involved in the design process later recounted, this was not an empty promise. “Almost all of the domestic consumption of granite went directly to the construction site and our fellow architects across the rest of the country were left cursing as they were having to beg for every spare kilogram.” 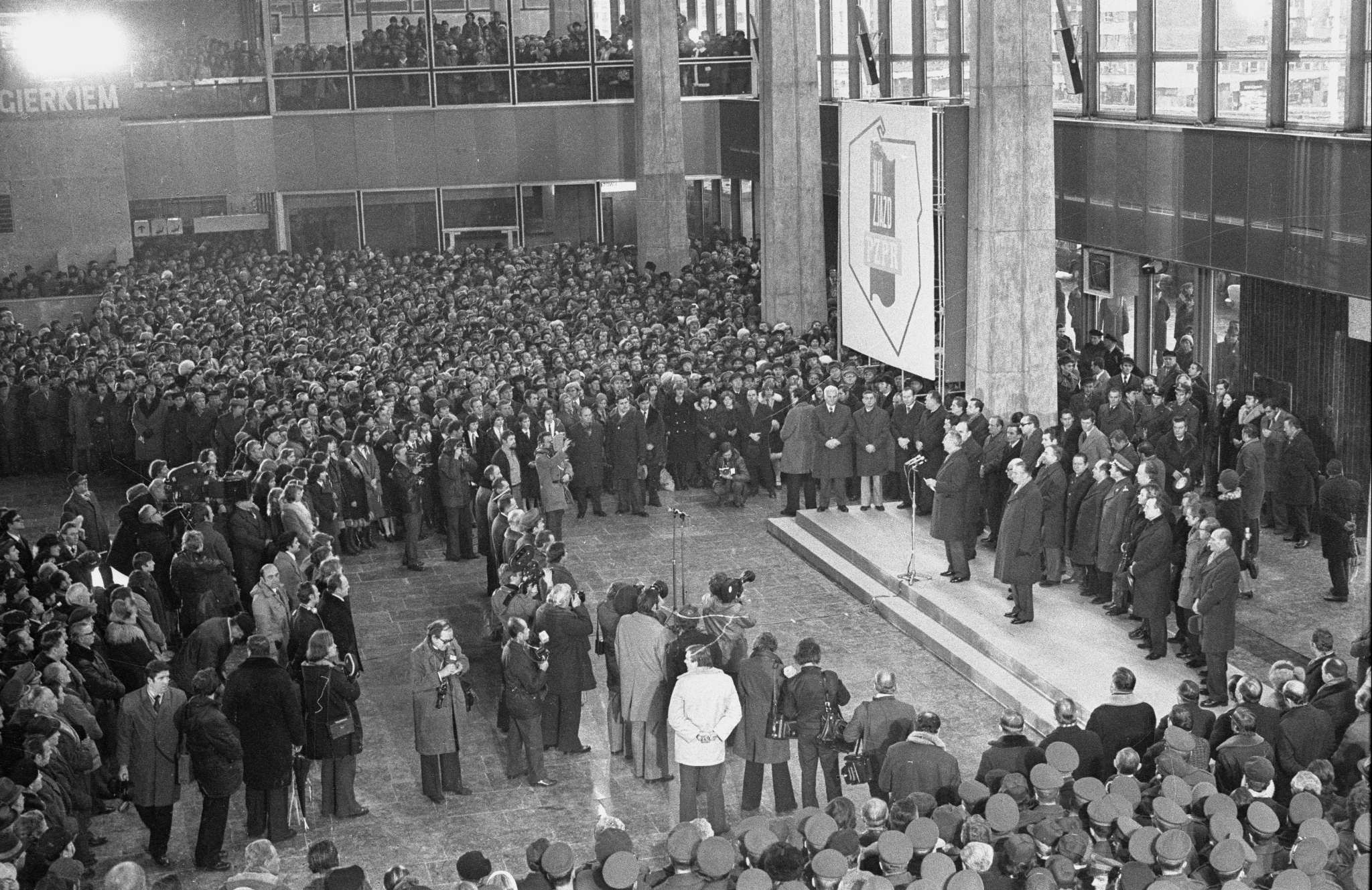 It was 45-years ago today! Edward Gierek conducts the opening ceremony.Mariusz Szyperko/PAP

Neither were these the only coveted materials that made their way to the capital.

“When I was building Warsaw’s Dworzec Wschodni, we were only allowed to use Polish products such as steel and stone,” said Romanowicz. “But on this project we could get the best of everything: automatic doors from Switzerland, suspended ceilings from Holland, etc.” 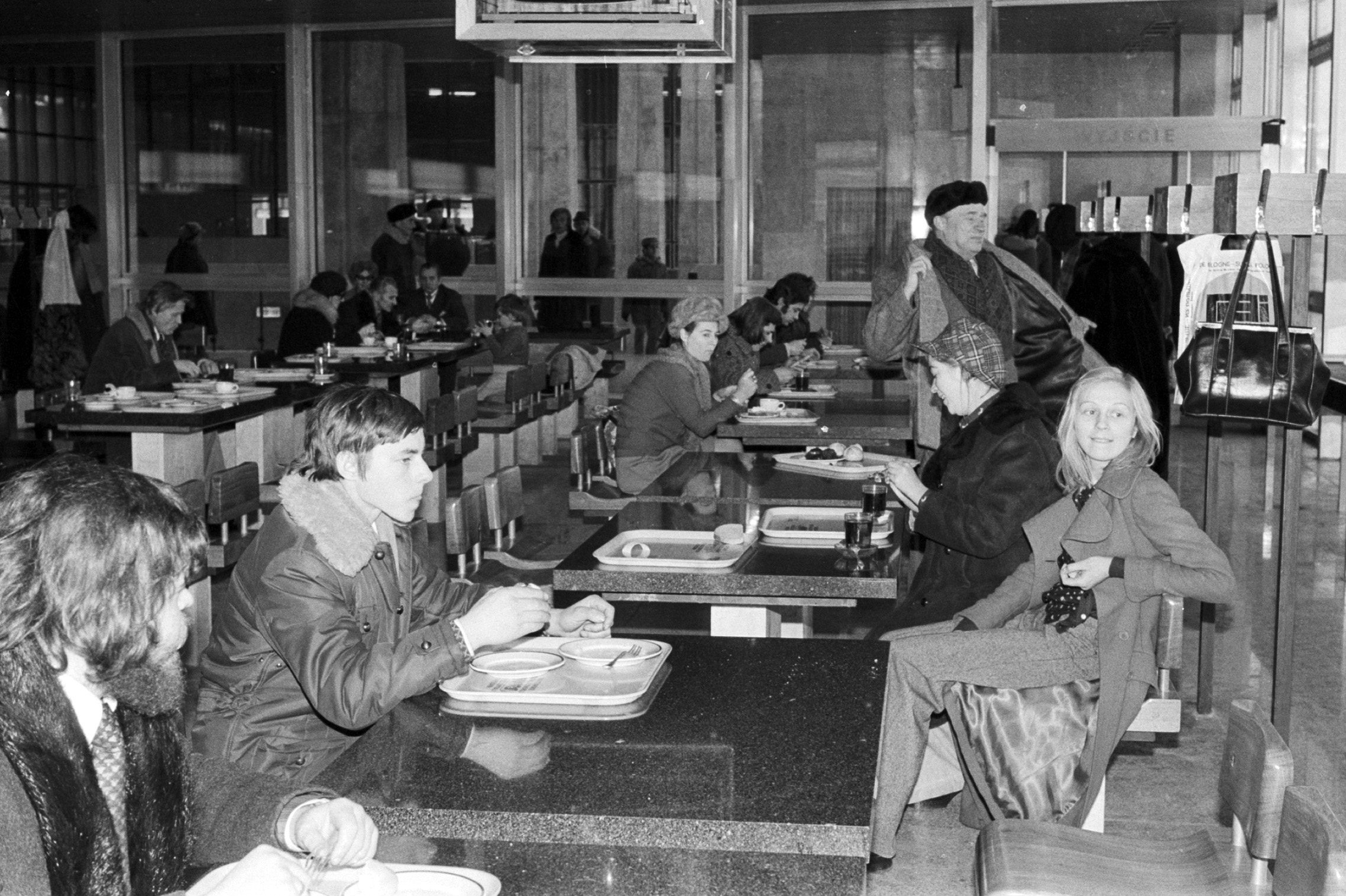 For years, the station’s facilities were a source of pride.Mariusz Szyperko/PAP

The big spending did not stop there; marble was imported from Kazakhstan to line the corridors while the columns outside the main hall were shipped in from Sweden. Innovations, meanwhile, were also introduced: clocks from Italy, information systems from Czechoslovakia and elevators and moving walkways from the American firm Otis.

With the latest developments keenly reported in the national newspapers, anticipation was allowed to build across Poland. As the launch day loomed closer, the station’s 1,000 workers found their ranks boosted by soldiers drafted in to polish the floors and complete last minute tasks. 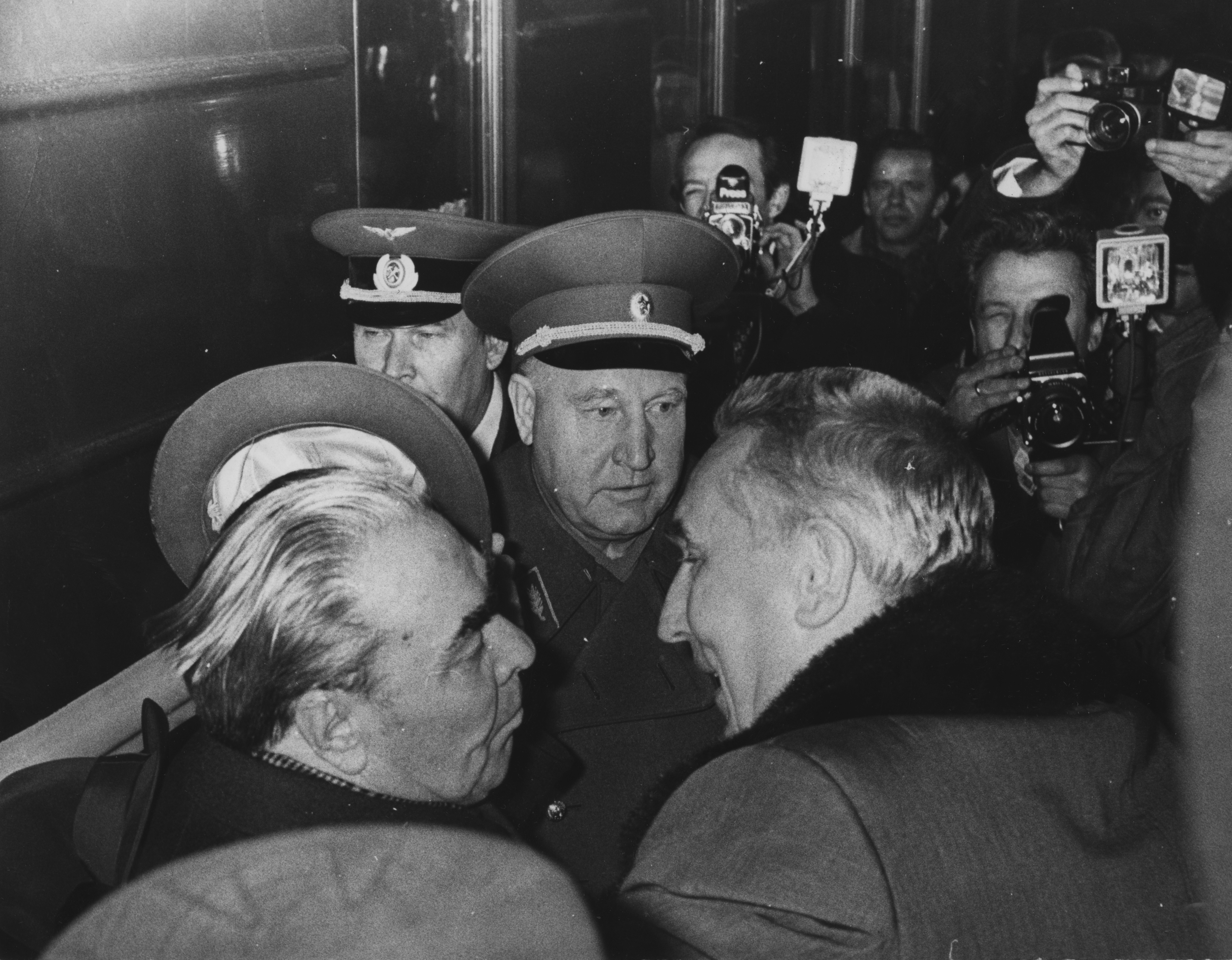 The official ribbon-cutting, however, was pre-empted by the opening of a slew of stores in the subterranean passages snaking from the main hall; straight away, a round-the-clock florist was mobbed by customers looking to buy bouquets for the name day that coincided with its opening: that of Barbara. Elsewhere, similar crowds built up around what was the country’s first vending machine.

The work – or so it seemed – paid off when, at 10 a.m. on December 5th, 1975, Poland’s key political leaders descended from a coach to inaugurate the station and meet its architects. 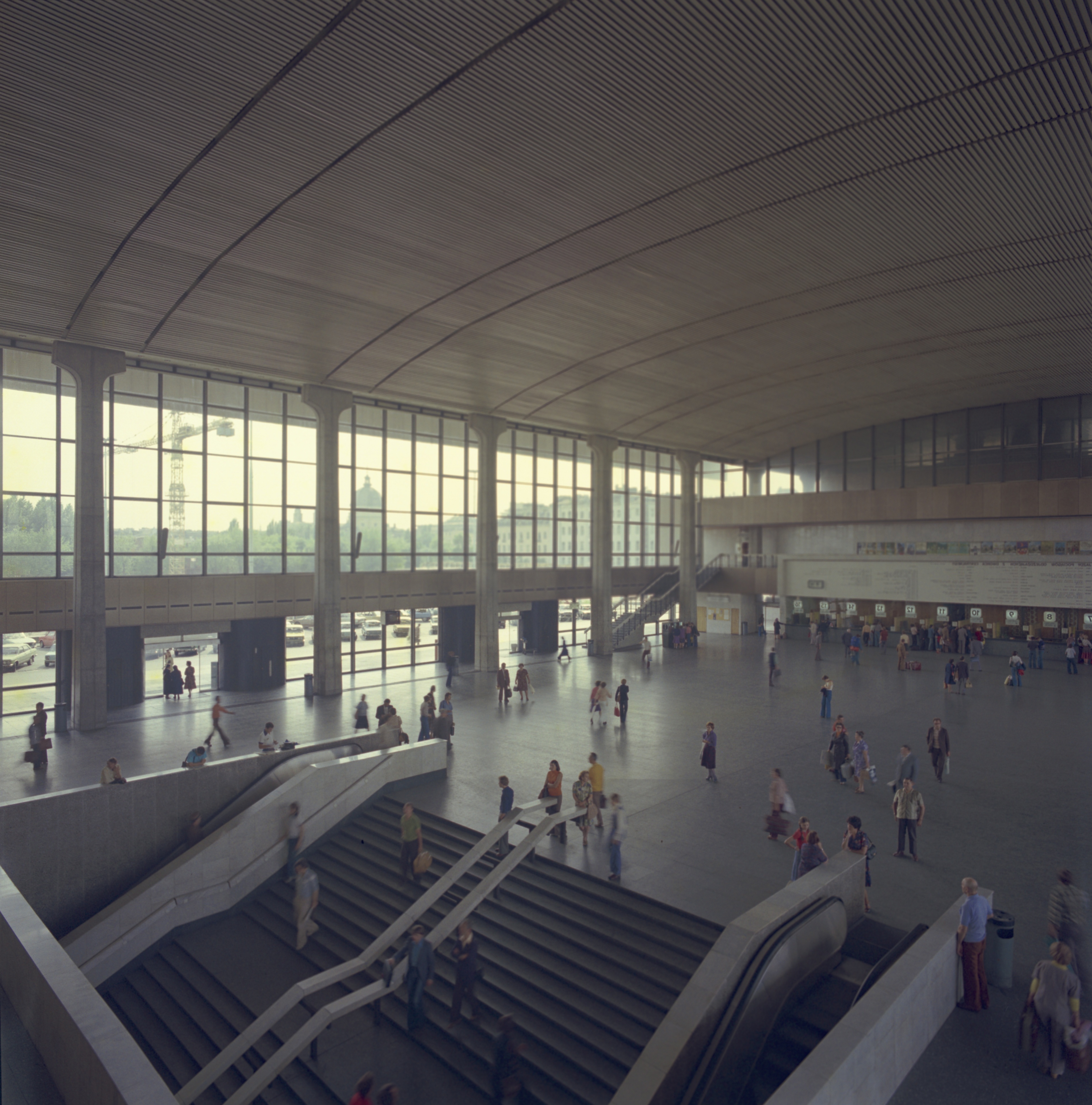 Seen here in 1978, the station was filled with technical innovations such as imported escalators and information boards.Jan Morek/PAP

“Members of the highest authorities got acquainted with the station’s pioneering structural and technical solutions,” declared PAP. “In the main hall, meetings were held with thousands of citizens.”

Addressing the assembled crowds, chief foreman Włodzimierz Zdziarski was in bullish mood: “We did everything so that this new facility would become the most beautiful landmark of our socialist fatherland!” 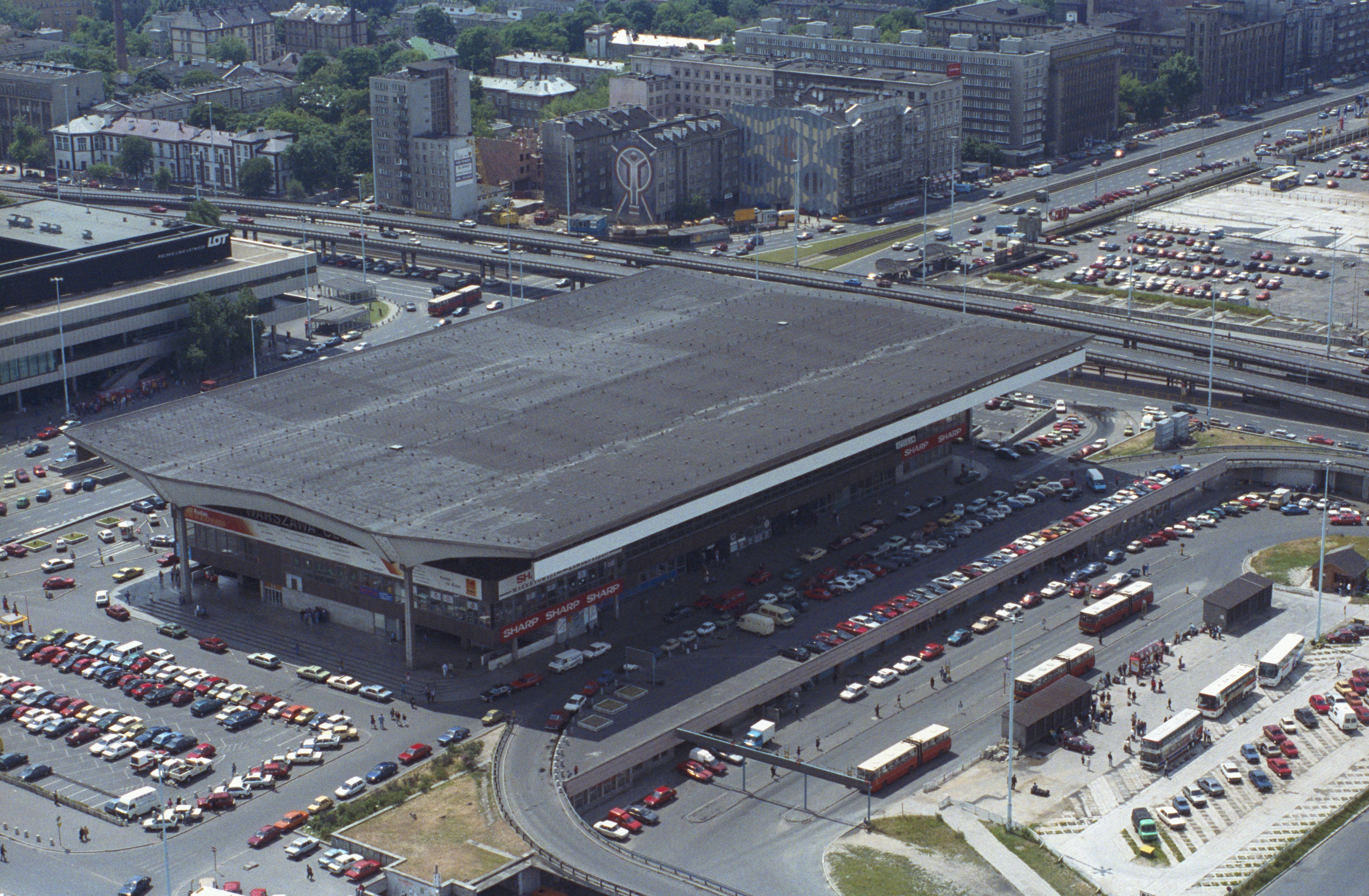 In 1993 the station had begun to feel like an outdated eyesore.Zbigniew Matuszewski/PAP

But it wasn’t until December 7th that the fanfare reached fever pitch. With the station decked out in ceremonial red banners, Leonid Brezhnev’s train arrived at Platform No. 3 at 7 a.m. Greeted personally by Edward Gierek, and soon surrounded by waiting photographers and girls throwing flowers, he was quickly ushered to a specially built VIP room (which today, incidentally, has been repurposed as a glassed-in waiting room for First Class ticket holders).

Viewed as a masterstroke of propaganda by the authorities, for years after the celebratory air refused to subside. Seen as a towering accomplishment of the Communist system, tourists from across the country flocked to admire the station first-hand; cabaret revues and fashion parades were held on the platforms, and a team of smartly-attired women were employed to direct visitors who found themselves lost in the network of sprouting tunnels (inspired by the Colosseum, the station was designed to be entered from all sides). 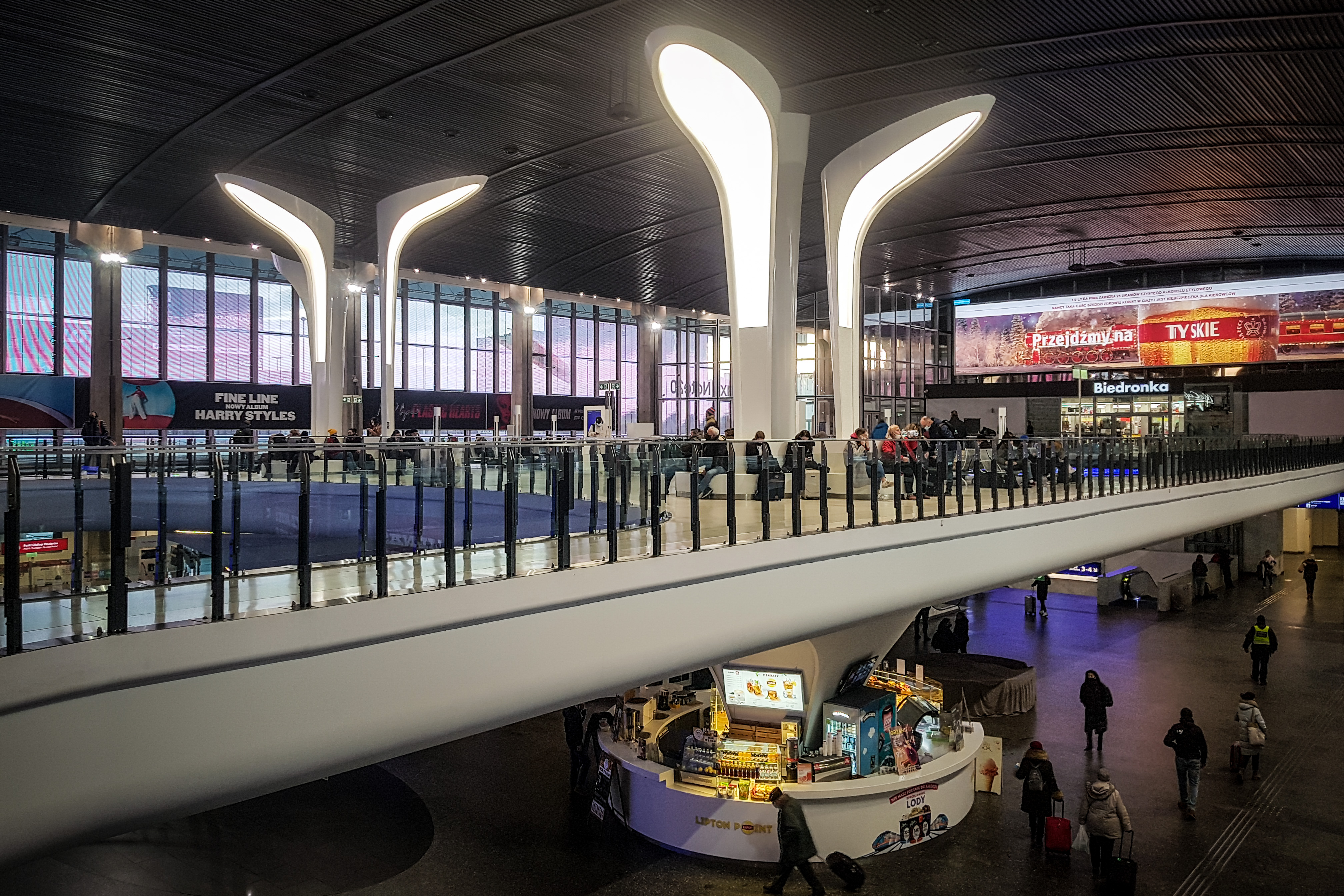 Just when demolition was beginning to look like the only viable option, a keen modernization was undertaken.Kalbar/TFN

Already, though, cracks had begun to show – and in the most literal sense. The breakneck pace of the construction work soon evidenced itself by way of leaking ceilings and broken electrics. With money and expertise often lacking to replace or repair the faults that had accumulated, it became almost a broken metaphor for a country on a headlong collision course with economic catastrophe.

Even the ornamental fountain soon ran dry – later immortalized in a film by Stanisław Bareja, one scene depicted a young boy refusing to toss a coin into the fountain. On being told that doing so would mean he would one day return, the boy retorted with the infamous line: “but I don’t want to come back here!”. 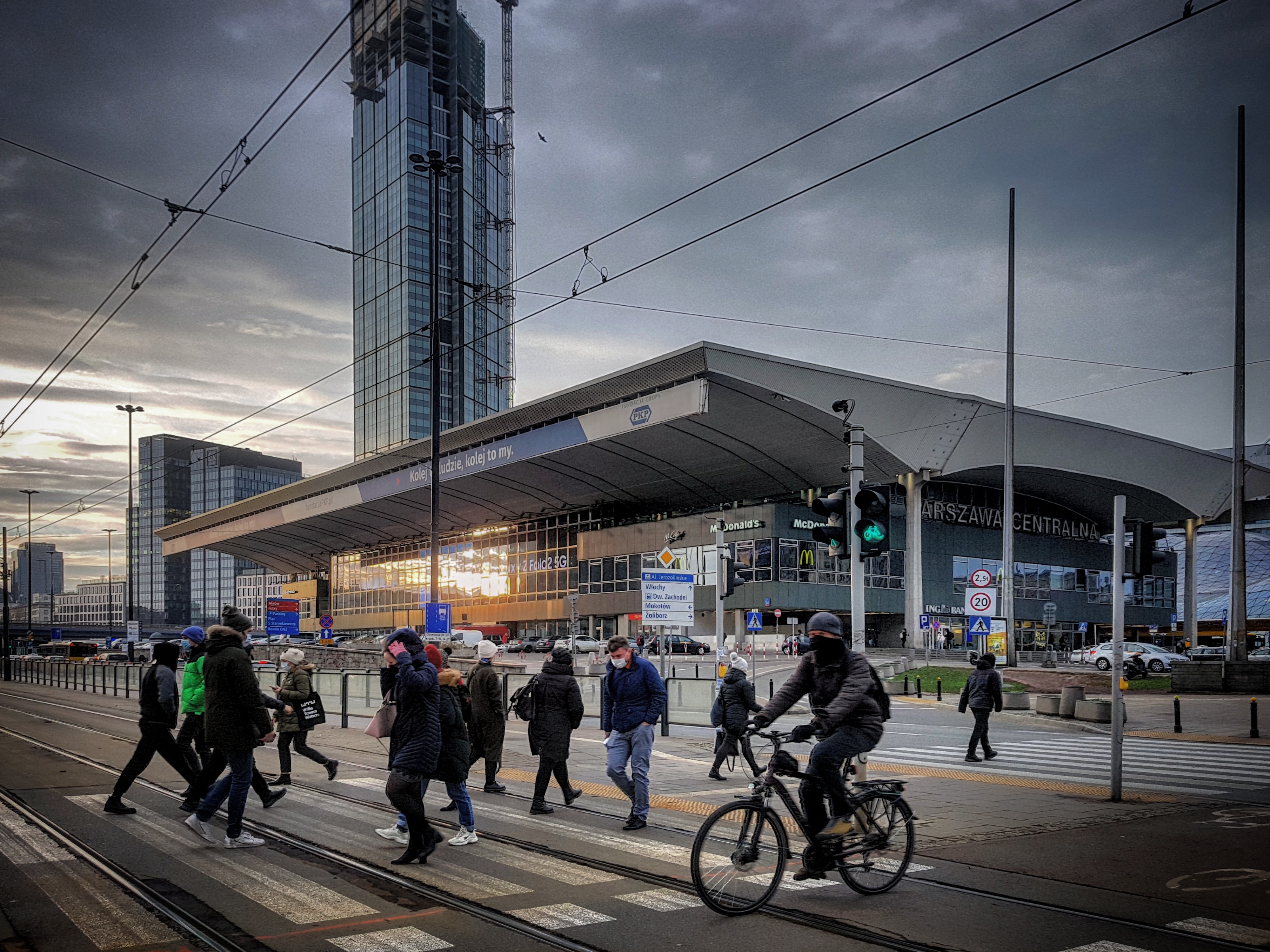 The ambitious revamp has gone a long way to thoroughly rehabilitating the station’s reputation.Kalbar/TFN

As the years ticked by, what had been proclaimed to be a post-modernist pearl found itself falling into disrepair. The decline became all the more accentuated after the political transformation in 1989. With Poland gripped by wild, freestyle economics, the station’s tunnels became a seedy underworld inexorably associated with the faults of capitalism.

In its rotting recesses gangs of hunched vagrants could be seen congregating whilst noxious smells circulated around the disintegrating corridors – years later, it would emerge that an illegal meat factory had been operated by a kebab store kingpin in the basements, and that the station’s memorable odour was directly attributed to the animal fat that had congealed in the pipes. 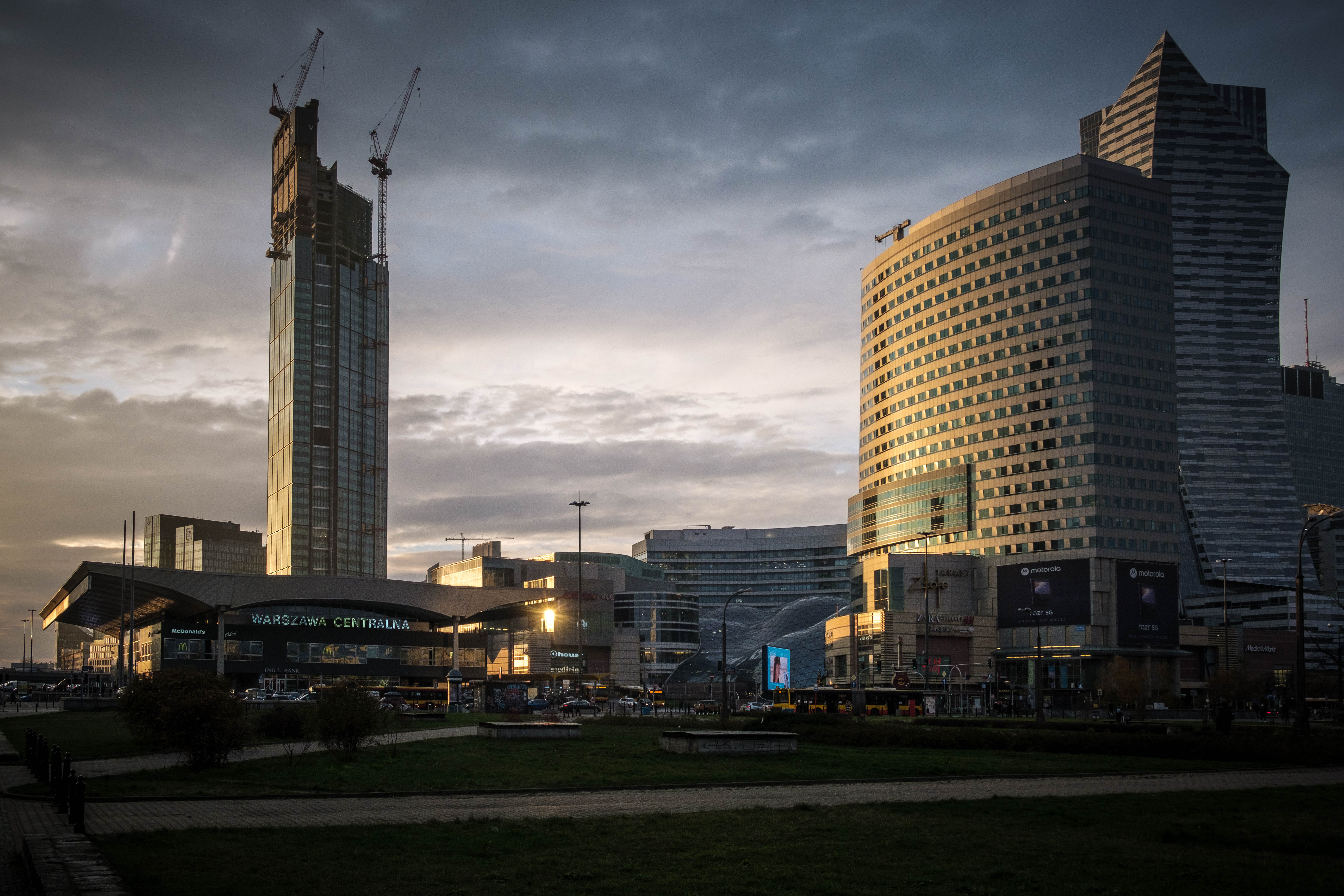 Ringed by glinting developments and towering skyscrapers, today it stands like a small little gem salvaged from the past.Kalbar/TFN

Apocryphal it might be, but it’s also said that when one firm won a contract to be the first in thirty years to clean the facades, they resigned immediately when faced with the scale of the task. These were not good times for Dworzec Centralny.

Yet just as its outright demolition was looking like the only fathomable solution, an ambitious revamp was launched, one that has gone a long way to thoroughly rehabilitating the station’s reputation. First conducted to coincide with Euro 2012, further improvements and investments have come thick and fast. 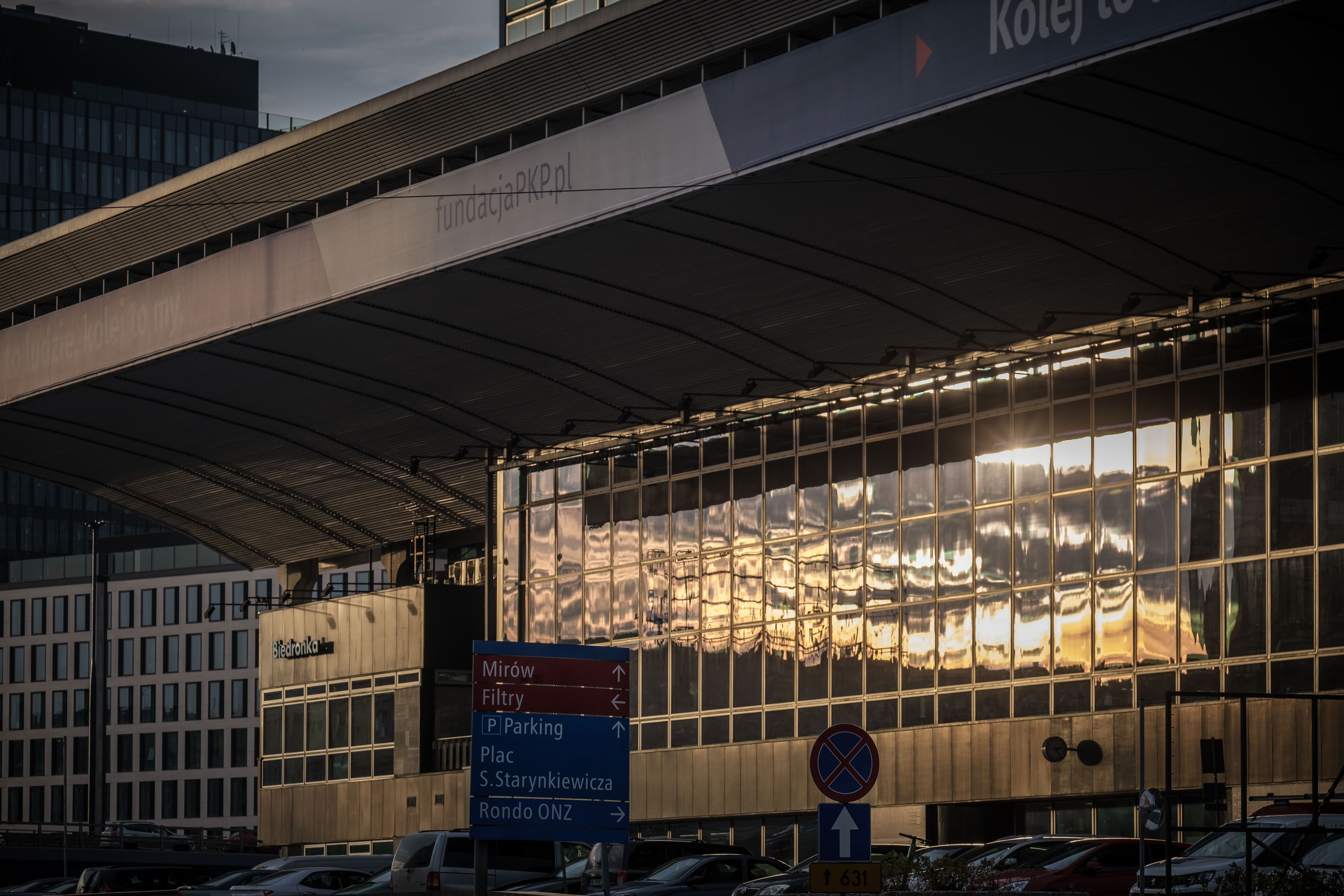 Now restored to its gleaming best, it is far removed from yesteryear’s station.Kalbar/TFN

Now restored to its gleaming best, it is far removed from yesteryear’s station. Ringed by glinting developments and towering skyscrapers, today it stands like a small little gem salvaged from the past. Treasured by architecture buffs, and gleefully acknowledged by lovers of the unusual, it’s finally earned the recognition that it merits.