As an installation artist, the boundaries of what constitutes being an artist become blurred.

Much of her work is concerned with the process of curating and innovative ways of presentation. She regularly collaborates with other people on projects and often incorporates the work of other artists, both living and dead, archive materials and pieces from museum collections to bring her own take on historical/philosophical questions and institutional activities to life.

Born in Warsaw in 1967, Macuga moved to London in 1989 where she attended Central Saint Martins and afterwards continued her studies at Goldsmith’s, University of London.

Speaking about her regrets of not living through the interesting transition period from communism to a free country in Poland she once said: “Poland was changing massively: you’d go back and the names of streets wouldn’t be the same. There was a massive growth of the art scene there, and many conflicts between artists, institutions and the public.

“It was a crazy time, when things were really on high alert. In some ways I was upset that I was missing out on it but at the same time I really enjoyed the whole progression of how I was working here.”

On the other hand, it would be true to say that as a career move, basing herself in London was instrumental in creating her international reputation from an early age.

In 2008 she was selected as one of the four nominee for the British Turner Prize, awarded each year to the most outstanding young British artist. 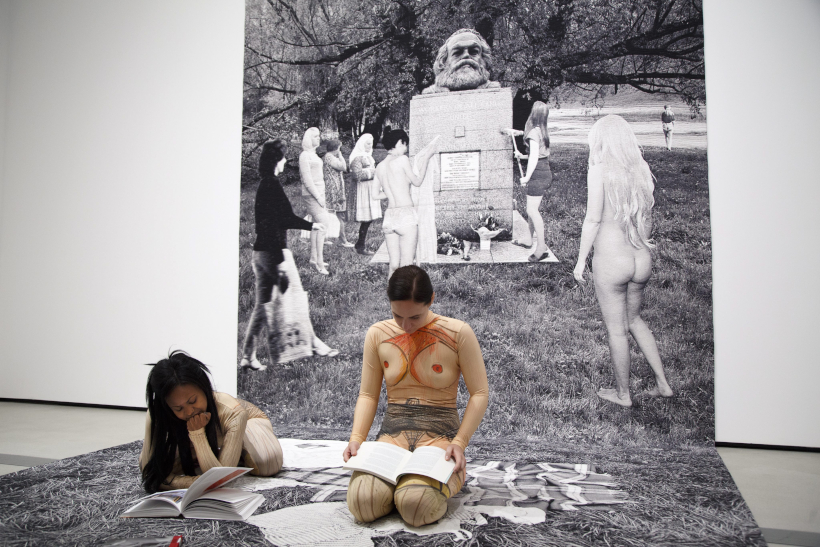 Performance artists read books under the installation 'Death of Marxism, Women of All Lands Unite' by artist Goshka Macuga at the press preview of the new 'The Broad' contemporary art museum in Los Angeles, California, USA, September 16, 2015PAP/EPA

Although she did not win, the nomination, for what is considered one of the world’s top contemporary accolades also helped place her in a position beyond the reach of anything she could have achieved in the turmoil of the Polish contemporary art scene of the early post-communist years.

In 2002, at the Galeria Foksal Foundation in Warsaw, she recreated the interior of a traditional Polish folk-art styled cottage inside the gallery space. The ‘cottage’ was then used as the display space for works by other contemporary artists.

In this environment, the modern works appeared at odds with the traditional setting, while in reality the whole installation existed in the fashionable and pristine setting of the Foksal Foundation Gallery.

Macuga undertook a similar project in Glasgow’s Transmission Gallery, where she displayed works by local artists in traditional museum cabinets and display cases, hence giving the impression of the works on show being associated with a conservative, and antiquated form of museum display.

Written with tender sensitivity in adjusted language easily understood by children, the gravity of the book’s underlying message is kept light and playful whilst never losing its core aim of explaining the importance of things such as repeatedly washing hands.

Refusing to be ground down: Warsaw’s independent cafés keep fighting despite lockdown

Where the streets have no…people!