The birds-eye view into the past is available through the desktop version of Google Earth, with maps of Warsaw from 1935 as well as  Gdańsk and Wrocław from 1943. 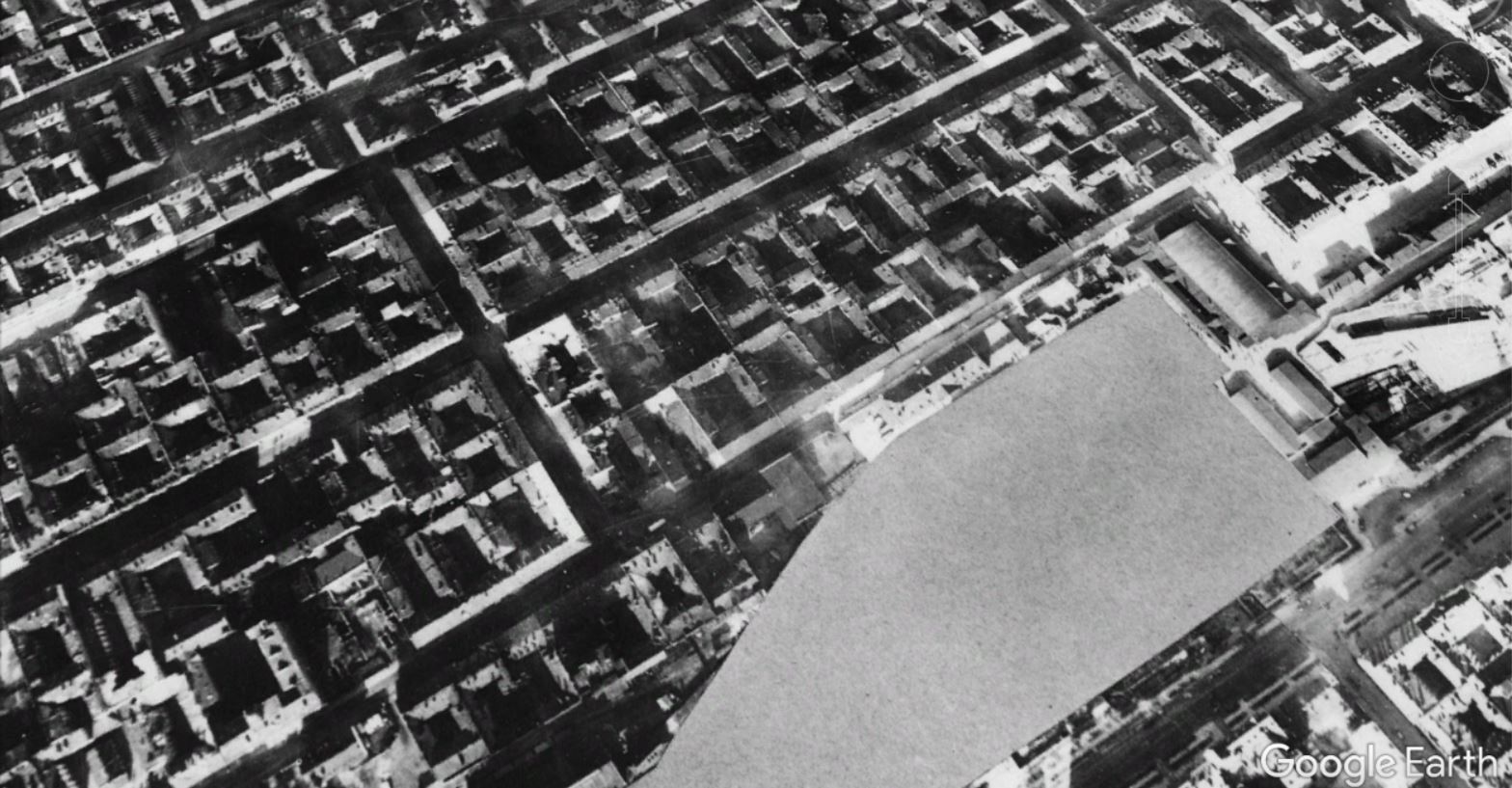 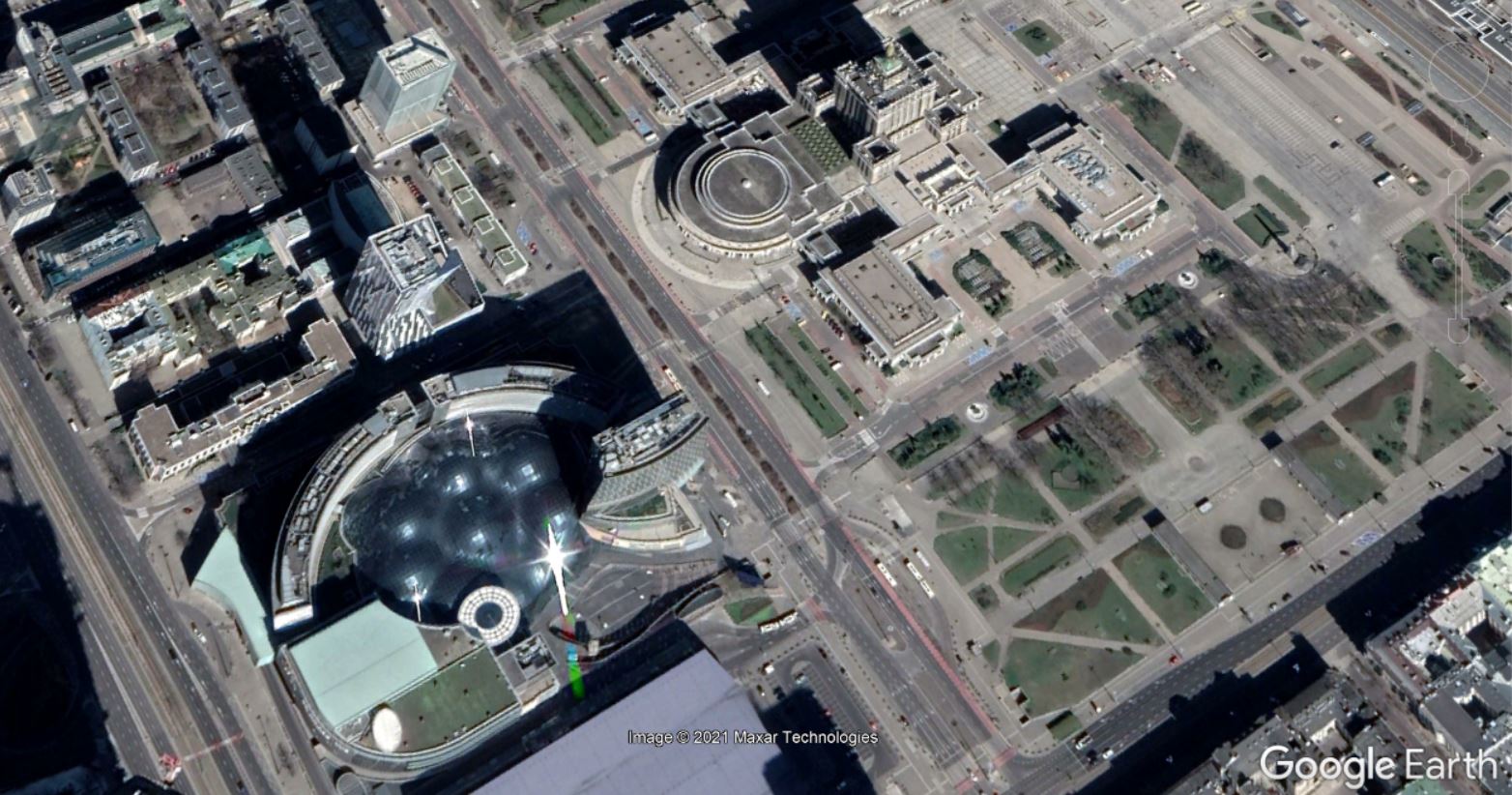 A close-up view of one of Poland’s most recognisable landmarks, the Palace of Culture and Science shows a seismic shift at the heart of the capital city. In 1935 the city centre was dominated by street after street full of housing blocks while the more recent picture shows the massive structure casting a shadow, modern office blocks, hotels and the iconic shopping centre Złote Tarasy.Google Earth 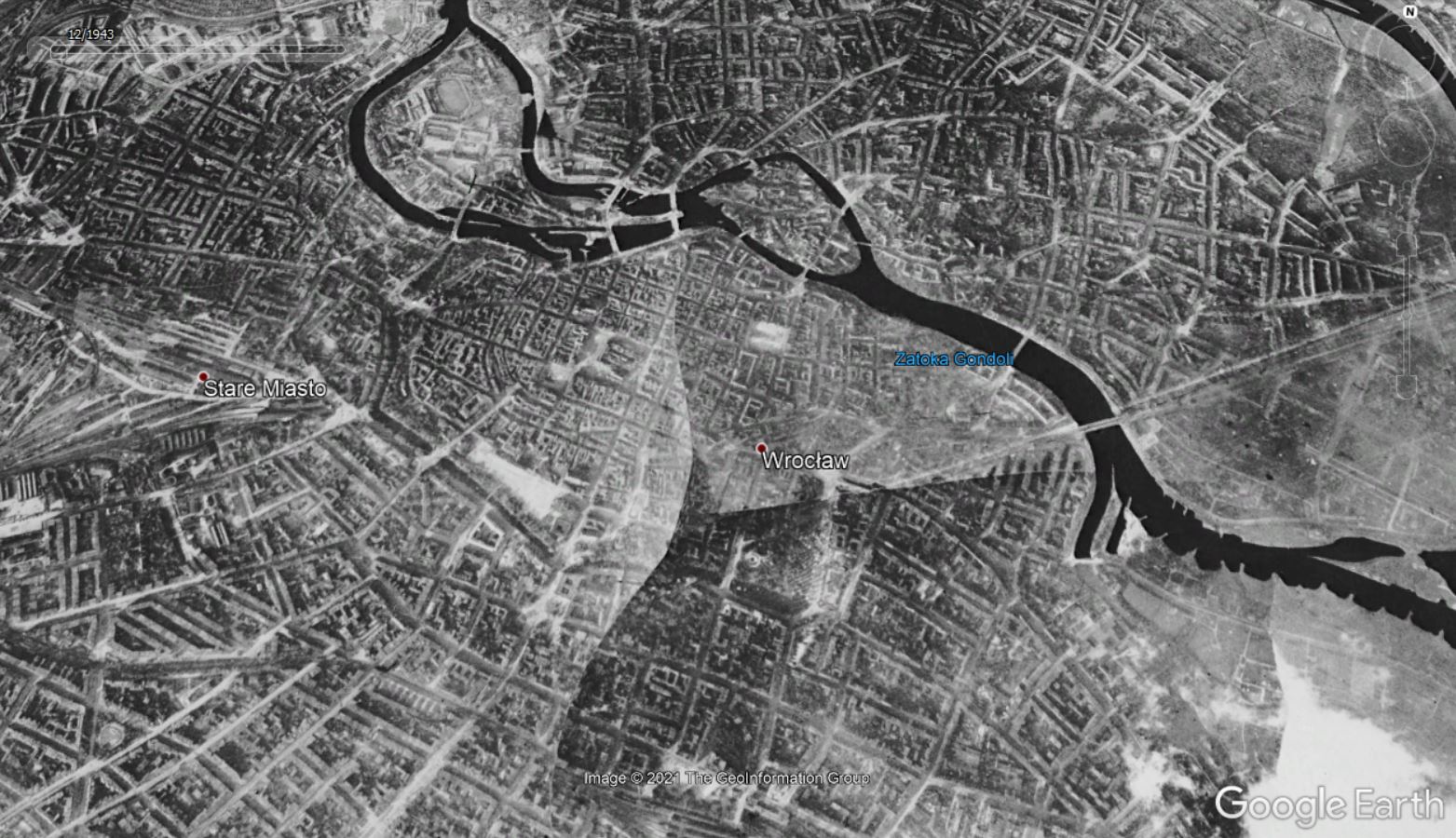 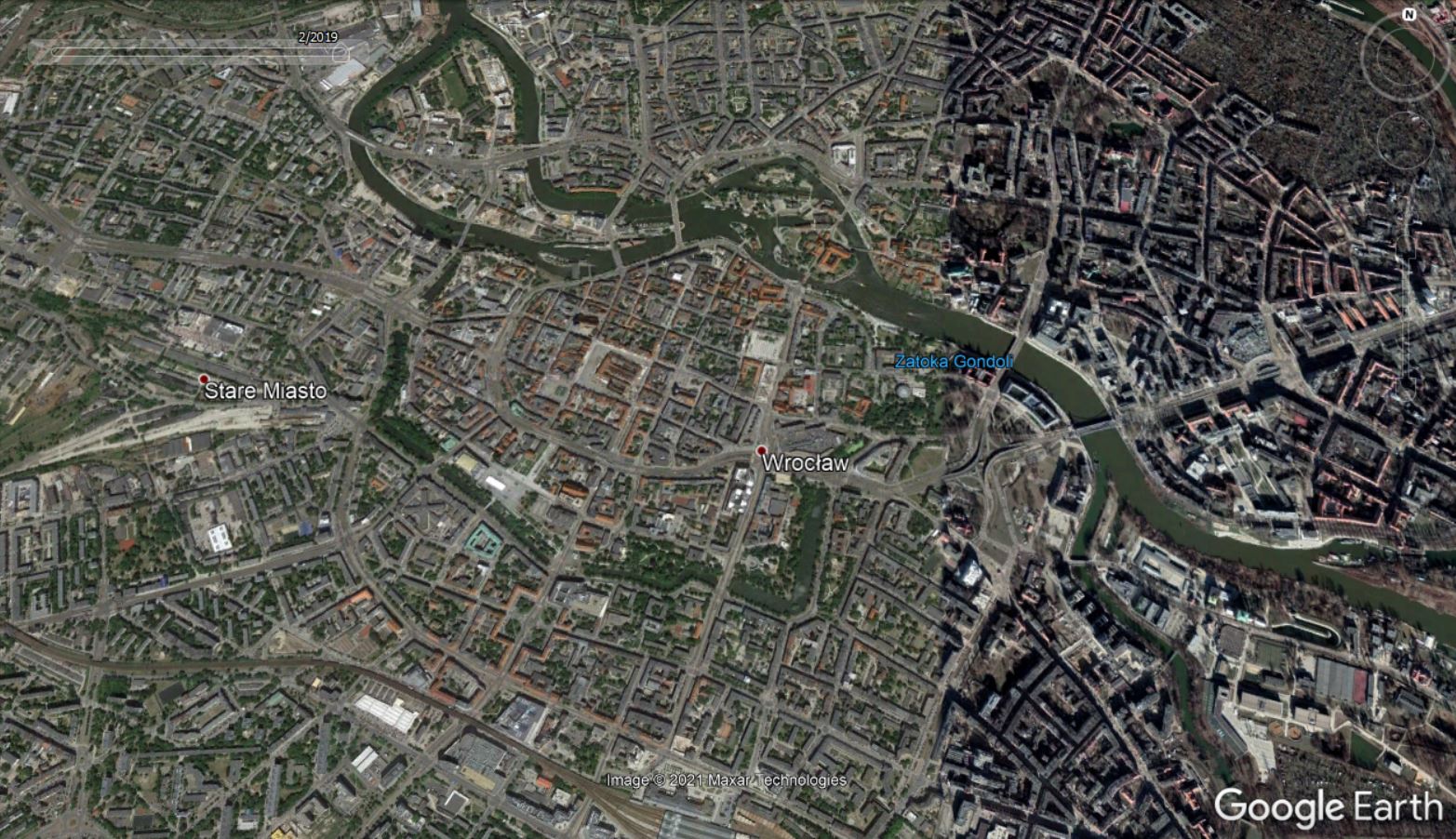 If we take a look at Wrocław, which draws many tourists due to its reputation as a historical city, very little seems to have changed over the last 75 years. The city that was previously known as Breslau has over 600,000 residents and a further 1.25 million people live in the metropolitan area.Google Earth 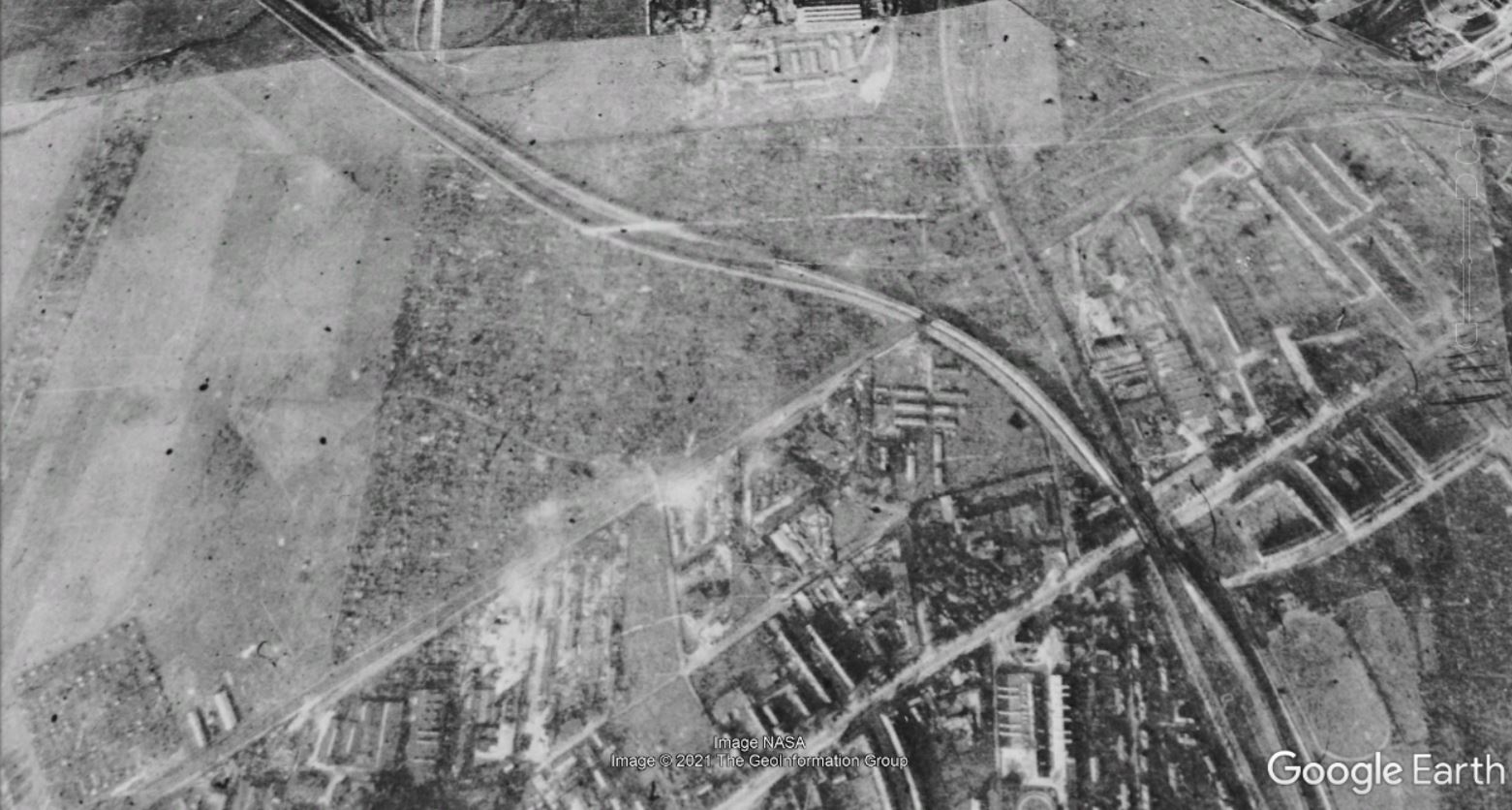 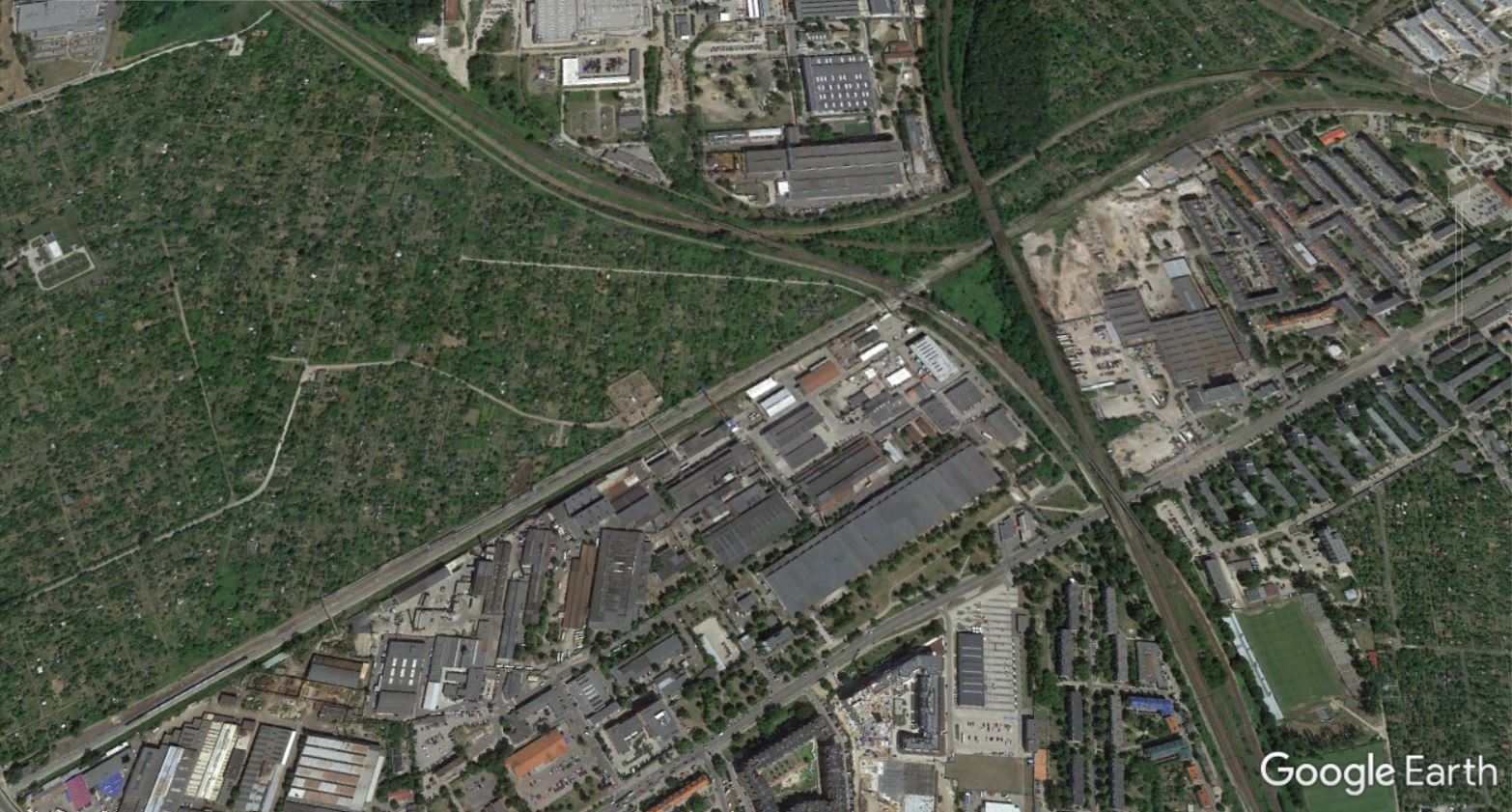 One of the most amazing comparisons shows how the RODs (Roddzinny Ogród Działkowy) or allotments in the heart of the city have remained untouched. These patches of green space can be found in most Polish cities and offer residents an escape from the concrete as well as a space to grown their own fruit or vegetables. In the pictures we can see four RODs, one named after Władysława Broniewskiego while the others are called Wisenka (Cherry), Malina (Raspberry) and Jarzębina (Rowan or Mountain Ash shrub).Google Earth 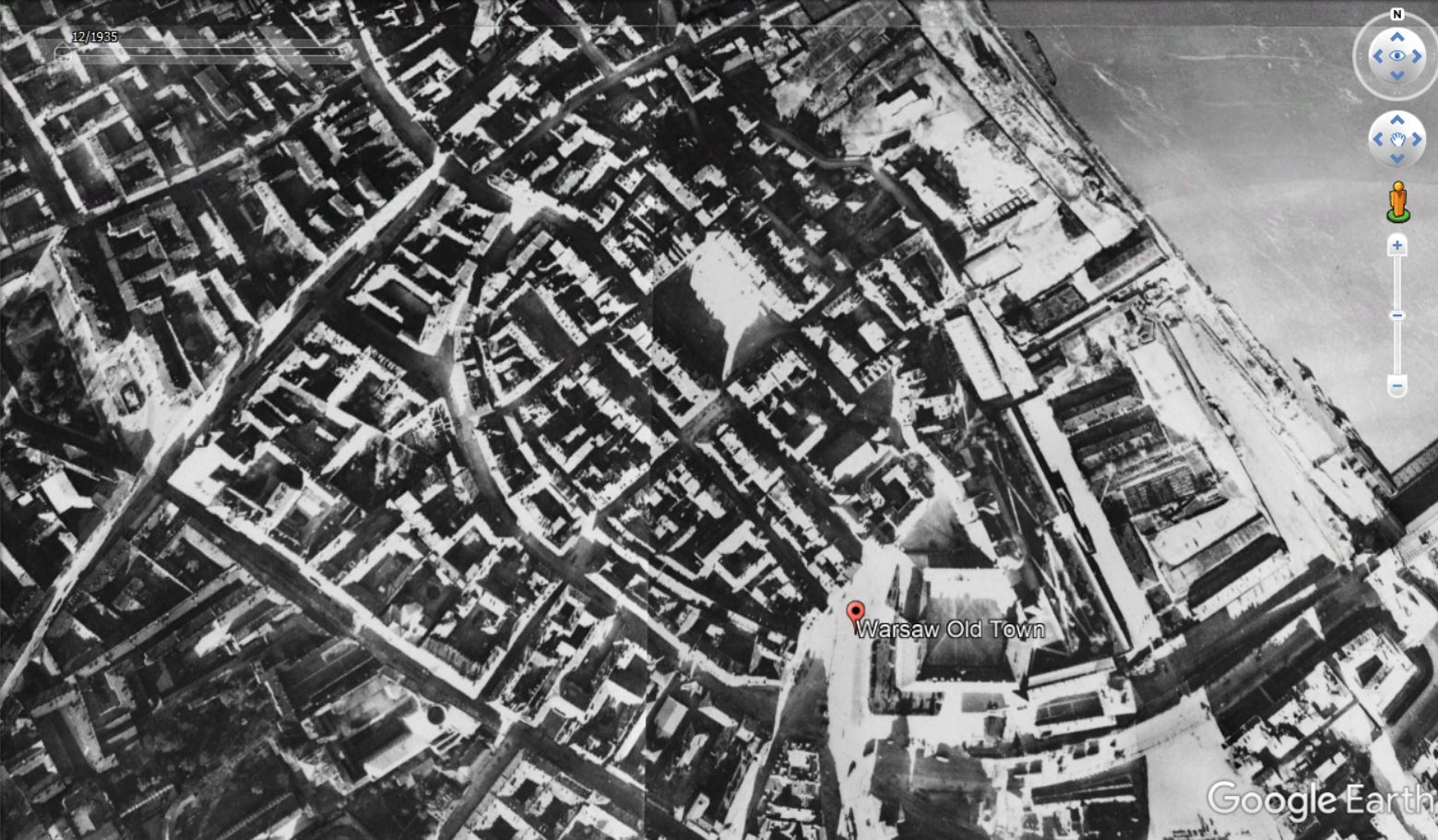 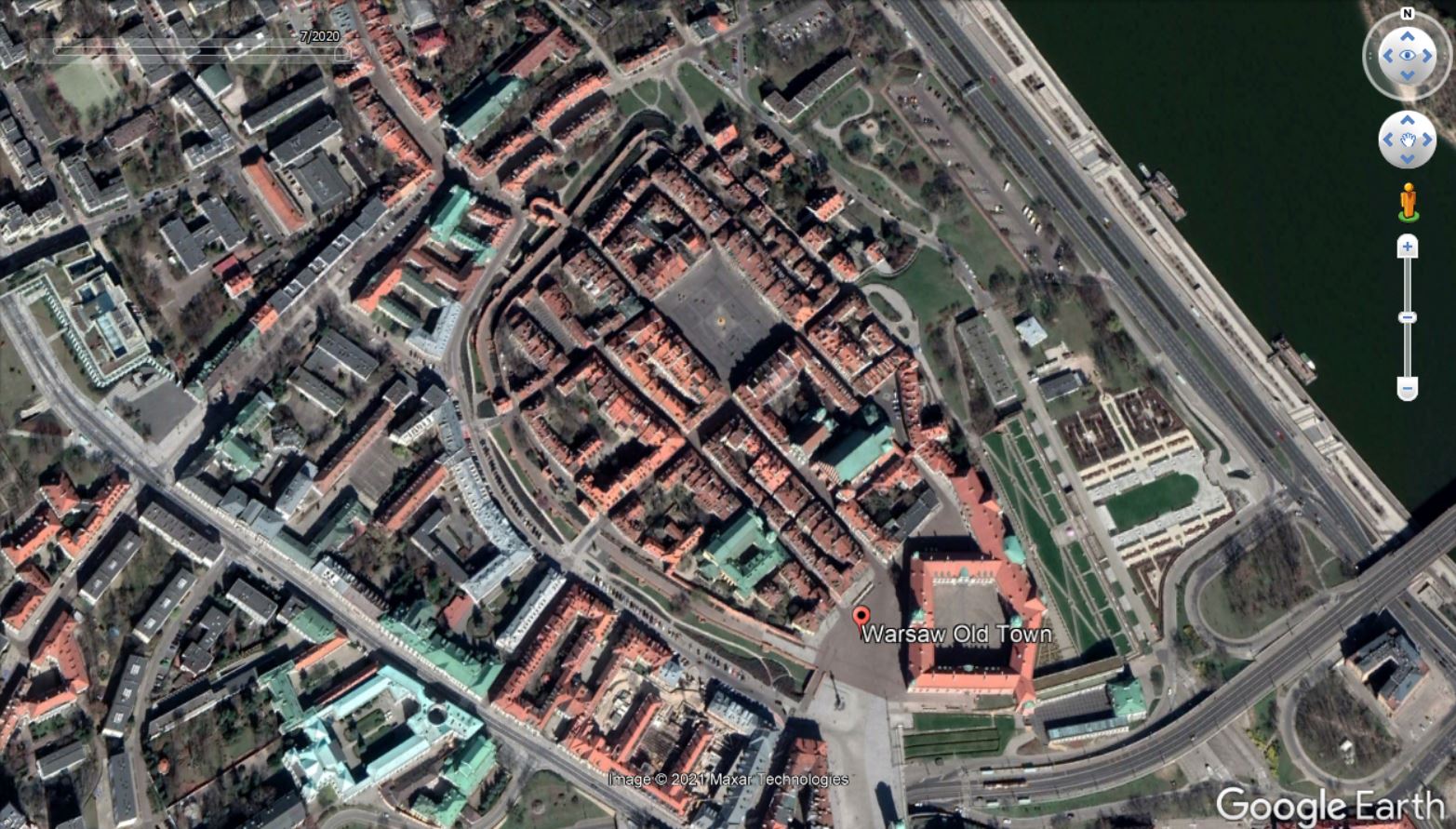 The area surrounding Warsaw Old Town has been preserved impeccably when observed from above. The biggest notable changes would be seen as an improvement by many with more green space between the Wisła and the Old Town in 2020 than there was back in 1935. The new park is named after Karolina Lanckorońska who donated over 30 paintings to the Royal Castle in Warsaw.Google Earth 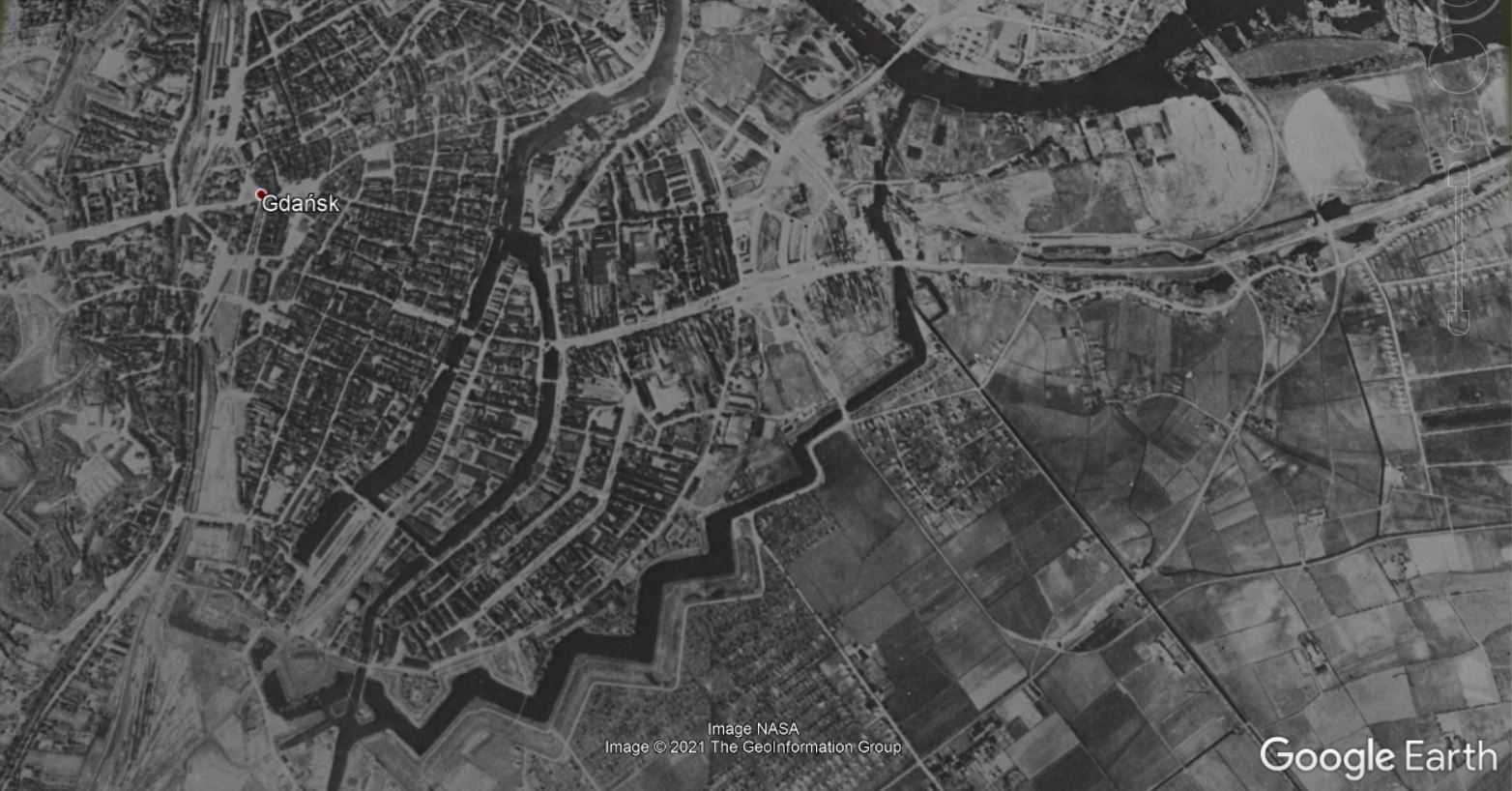 The port city of Gdańsk, previously known as Danzig, is now part of the only major conurbation in Poland. Collectively known as the Tri-City or Trojmiasto, Gdańsk, Gdynia and Sopot are a favourite summertime destination and growing commercial powerhouse on Poland’s coast.Google Earth 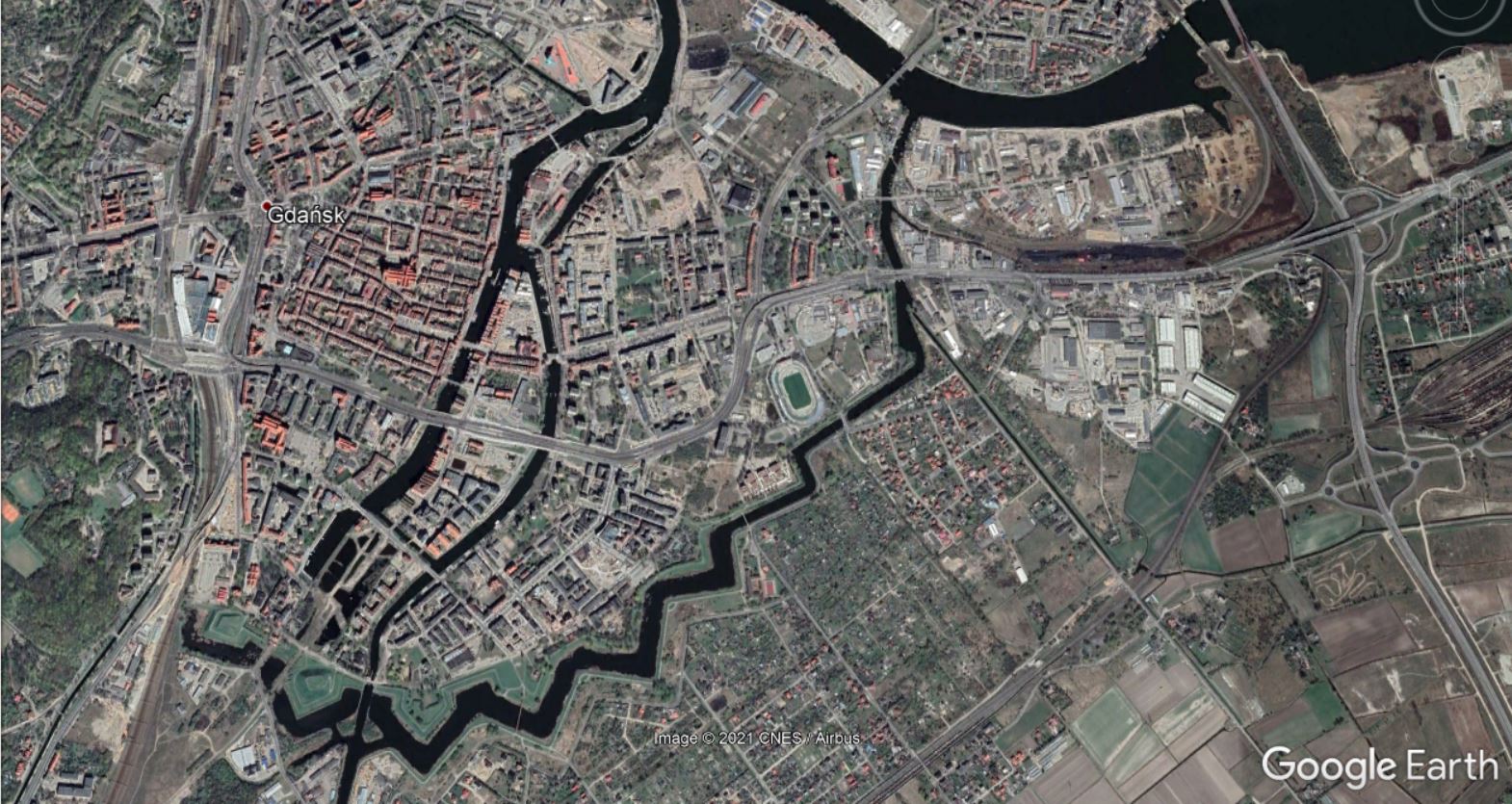 While the shape of the city is still defined by the water which runs through and around it the scale of growth in both housing and business premises is clearly visible.Google Earth 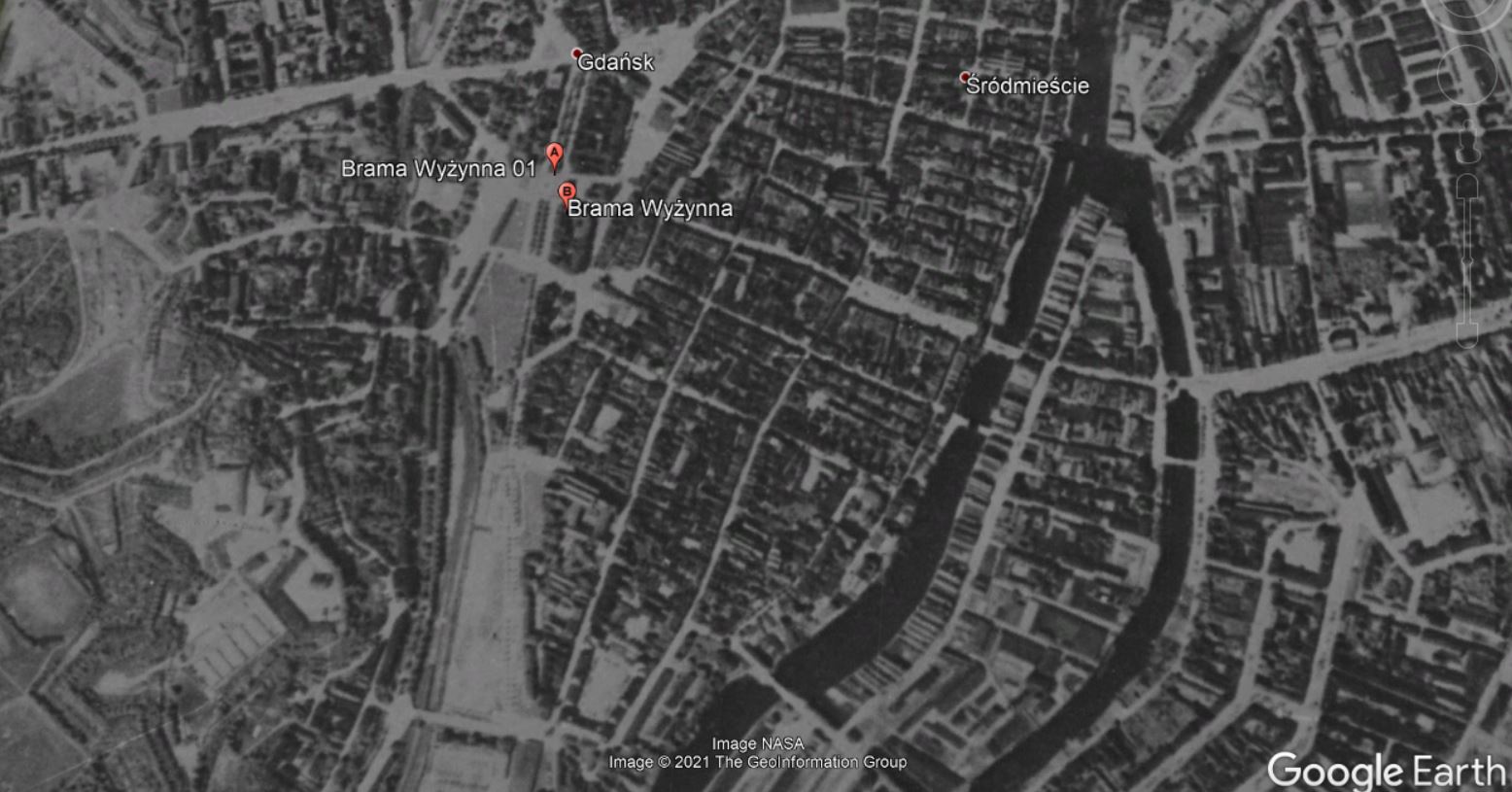 The historic Brama Wyżynna (High Gate or Upland Gate) which was built in 1575 offered an official entrance to the city. Beyond a few infrastructure changes such as an expanded road network little has changed in this area.Google Earth 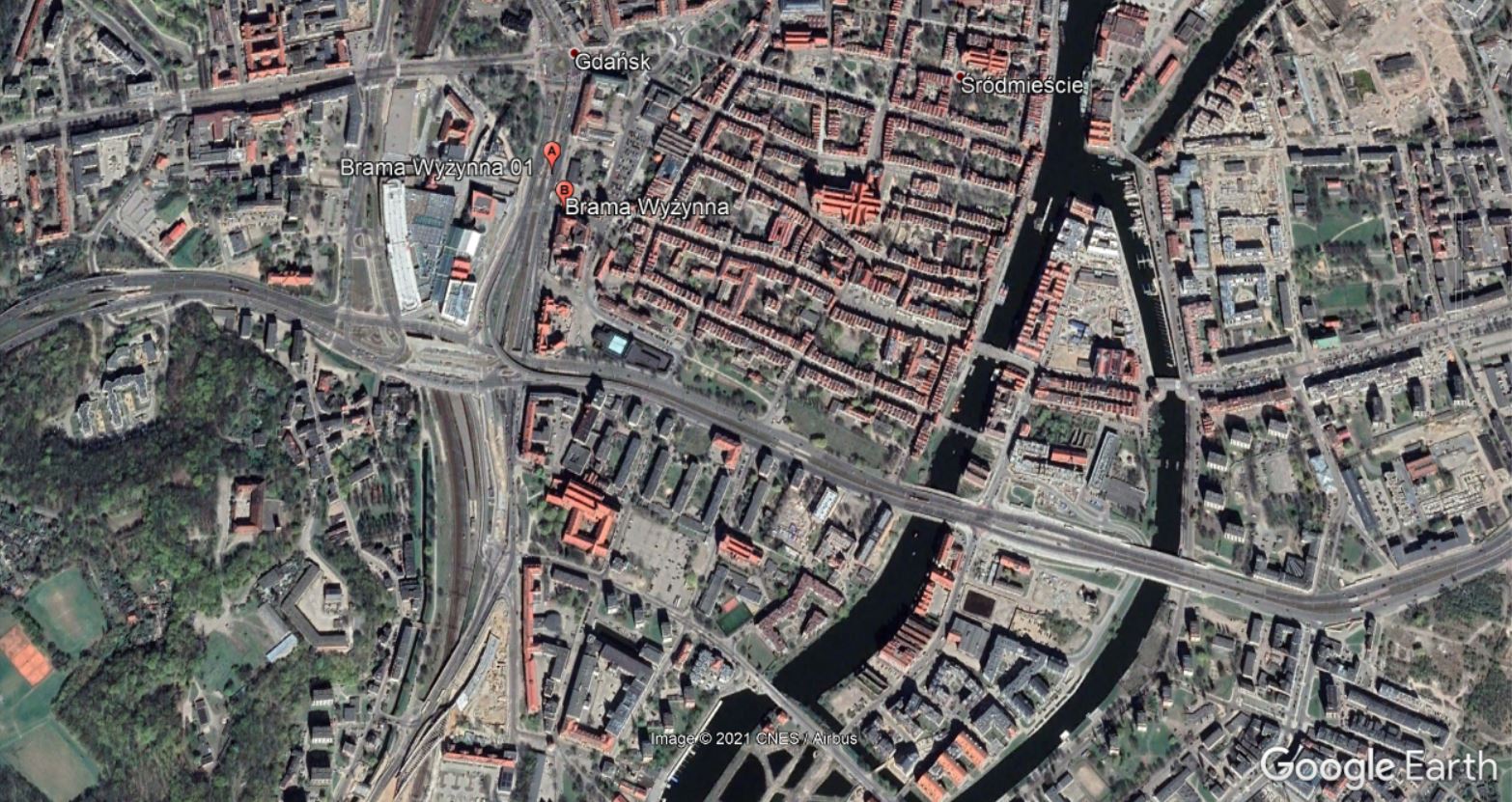 After passing through the Golden Gate tourists can amble along in awe at the architecture down Długa street and pass through the Green Gate, then take a water tram to soak in more of the city.Google Earth 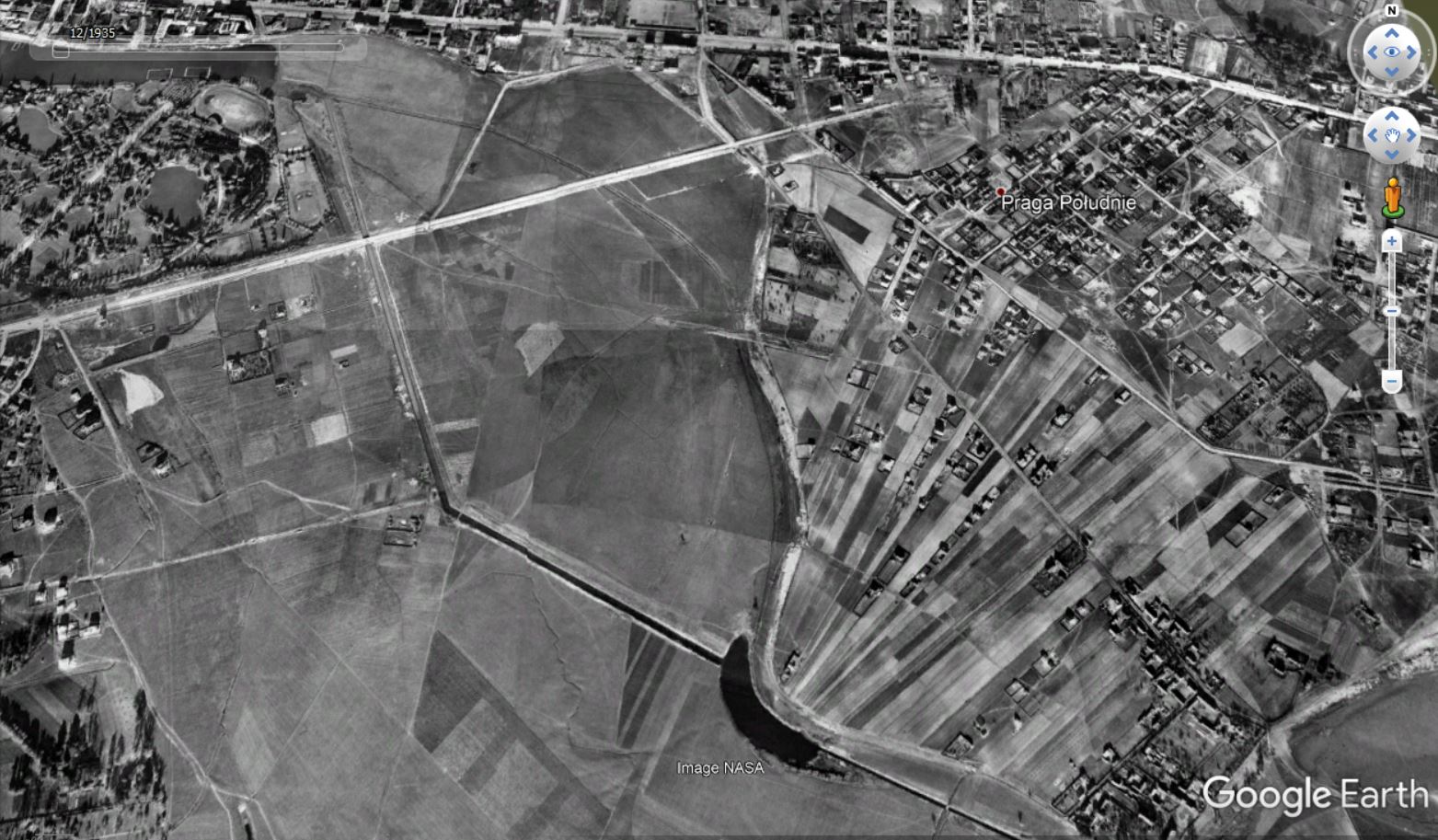 One of the most notable changes visible from the Google Earth images is the area of Praga-Południe in Warsaw. One of the fastest developing regions of the capital, what was farmland in 1935 is now a sea of housing with an extensive road network lacing through the area.Google Earth 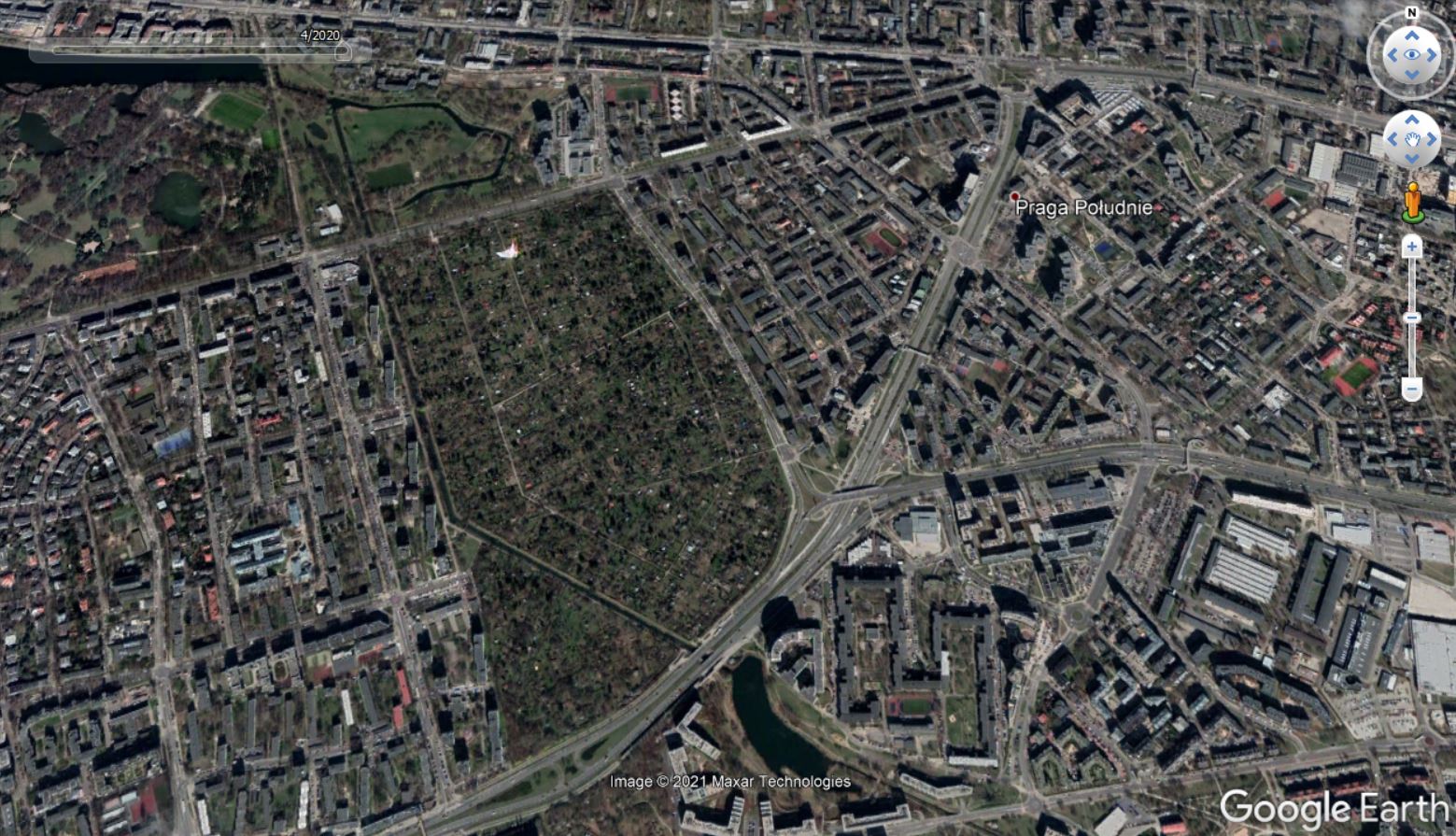 A park and ROD remain the only green spaces available to residents who live just south of the National Football Stadium. As the urban sprawl of the capital continues outward Praga-Południe will be increasingly seen as a central point in the city rather than a suburb over the river.Google Earth 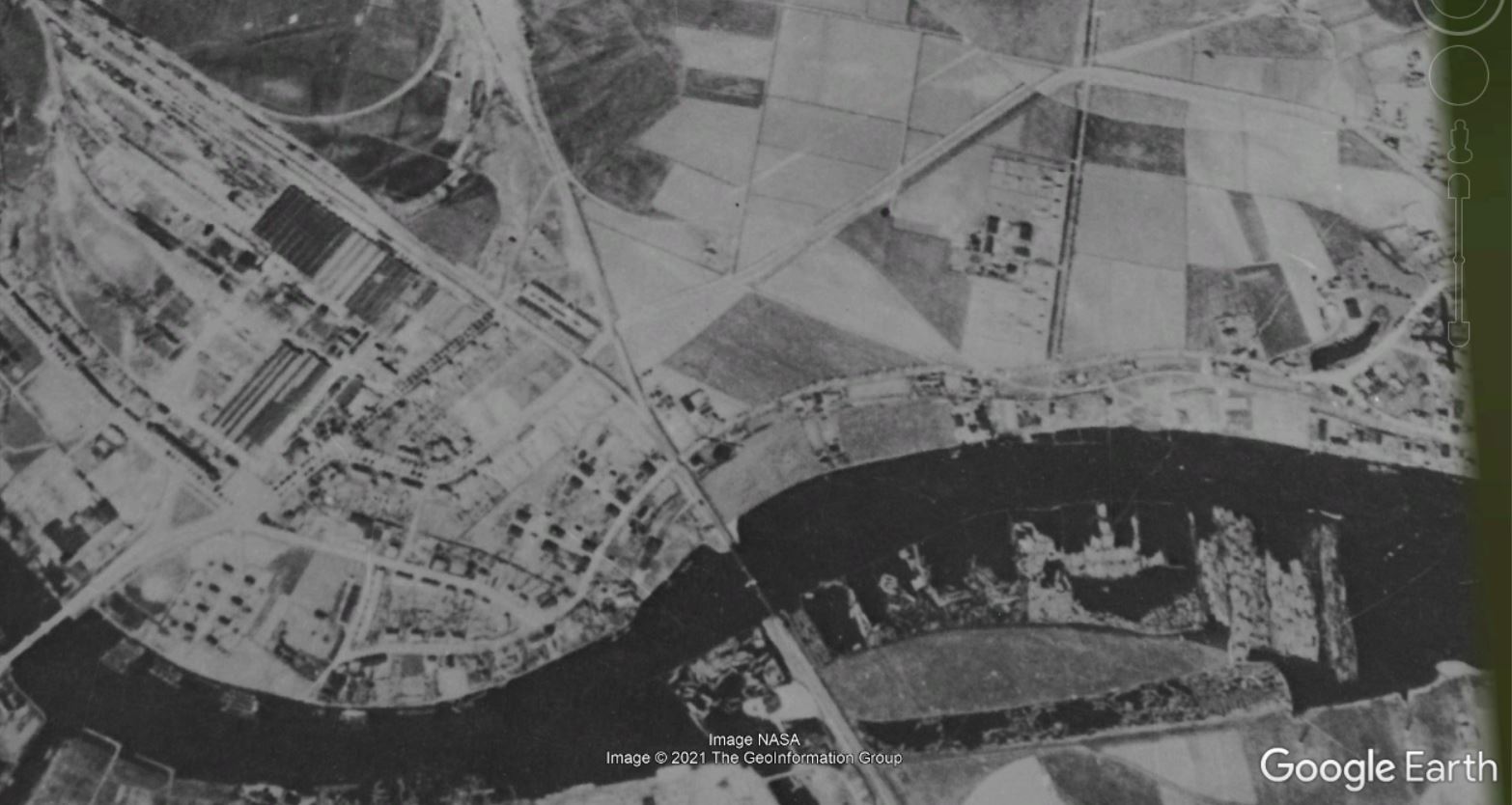 In Gdańsk’s Stogi district, expanded infrastructure including roads and bridges can be seen as well as the increase in housing and business properties along the waterway.Google Earth 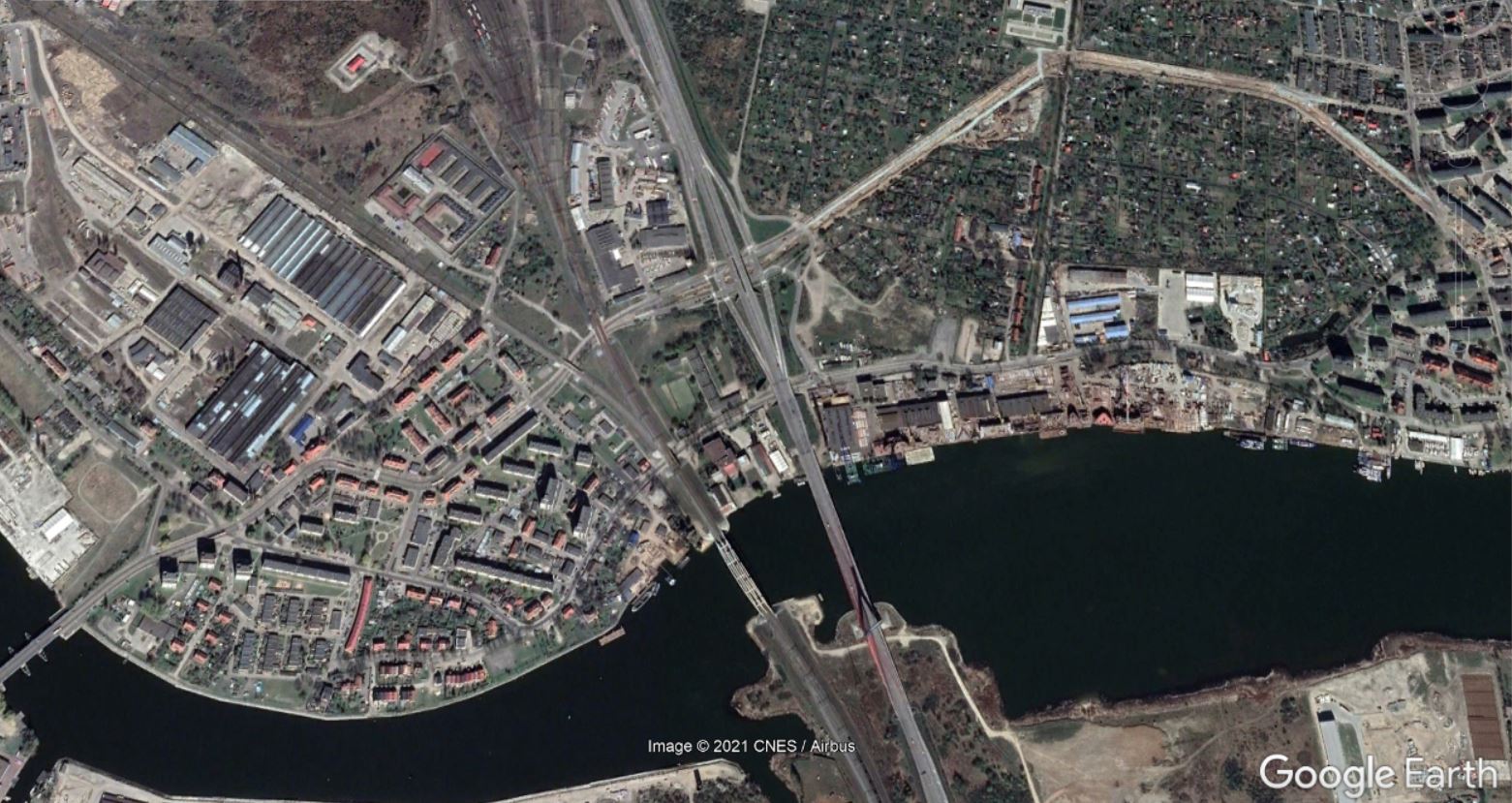 Out of shot to the north is Stogi beach which offers entertainment and attractions for families, a rare thing in a mainly industrial zone.Google Earth 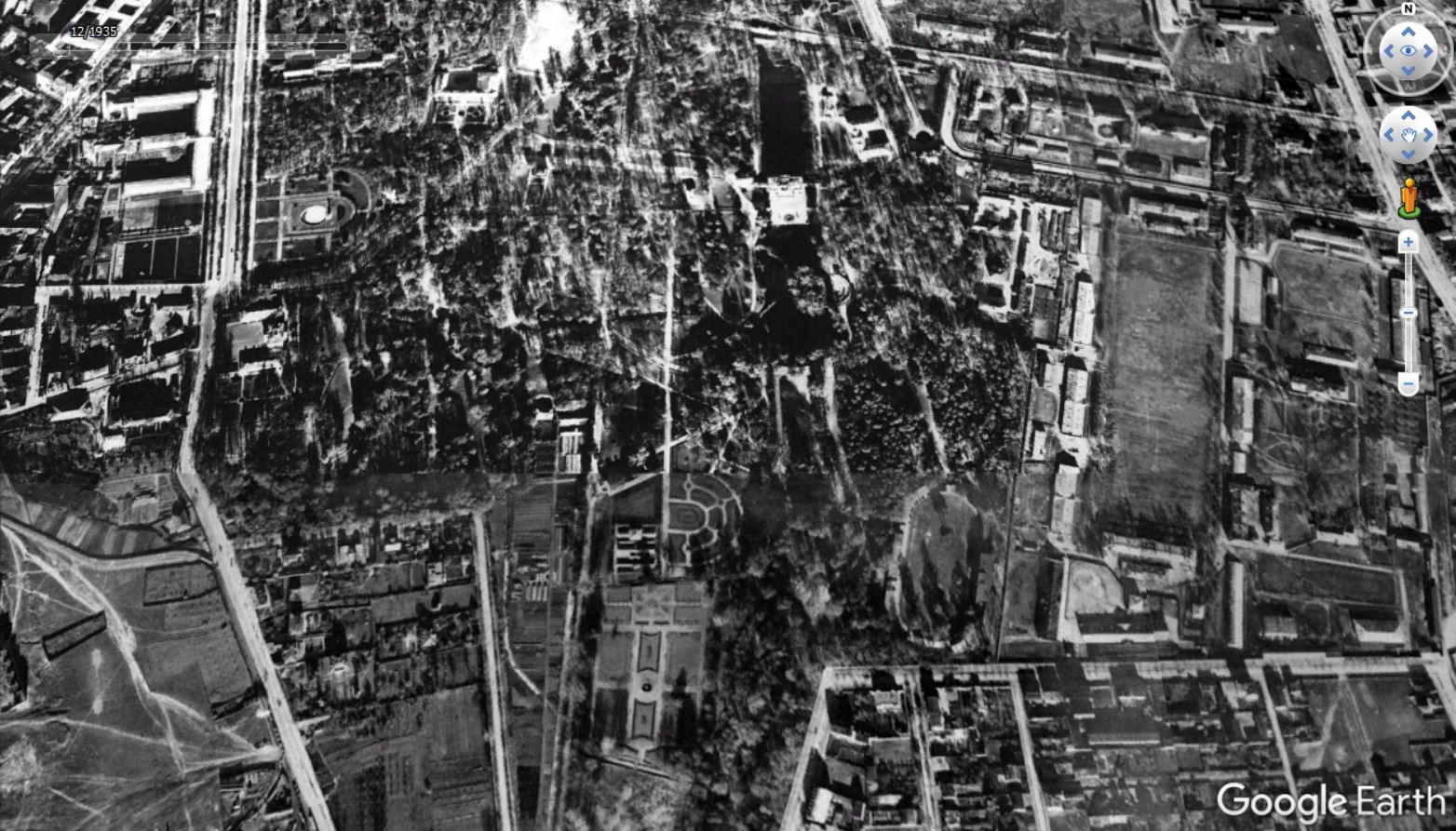 Łazienki Park which was created in 1918 is a focal point of social activity in Warsaw offering free Chopin concerts in the summer and a popular trail of Christmas lights at the end of the year.Google Earth 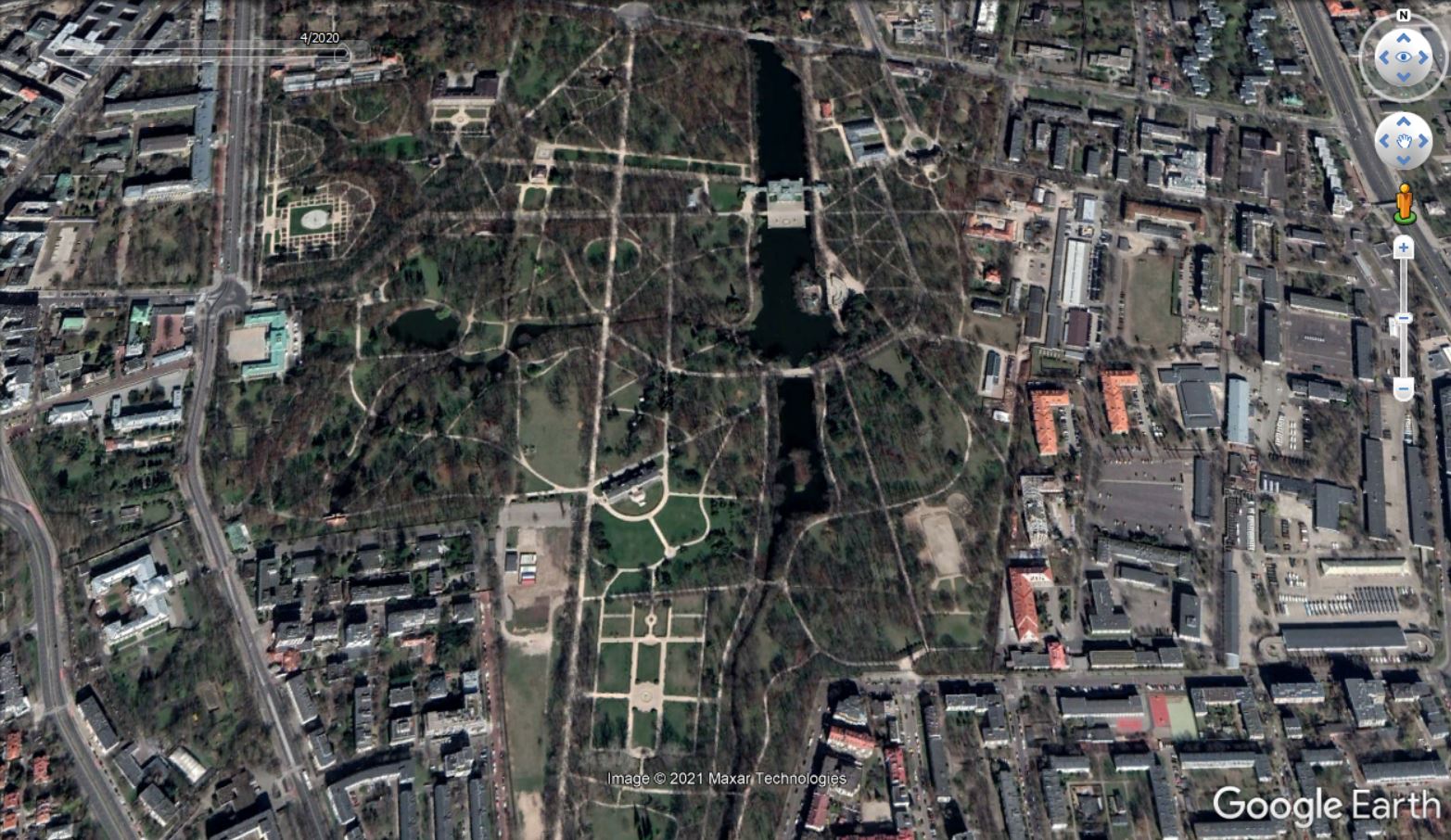 The palace and water surrounding it have remained a constant throughout the years but much in the surrounding area has changed.Google Earth 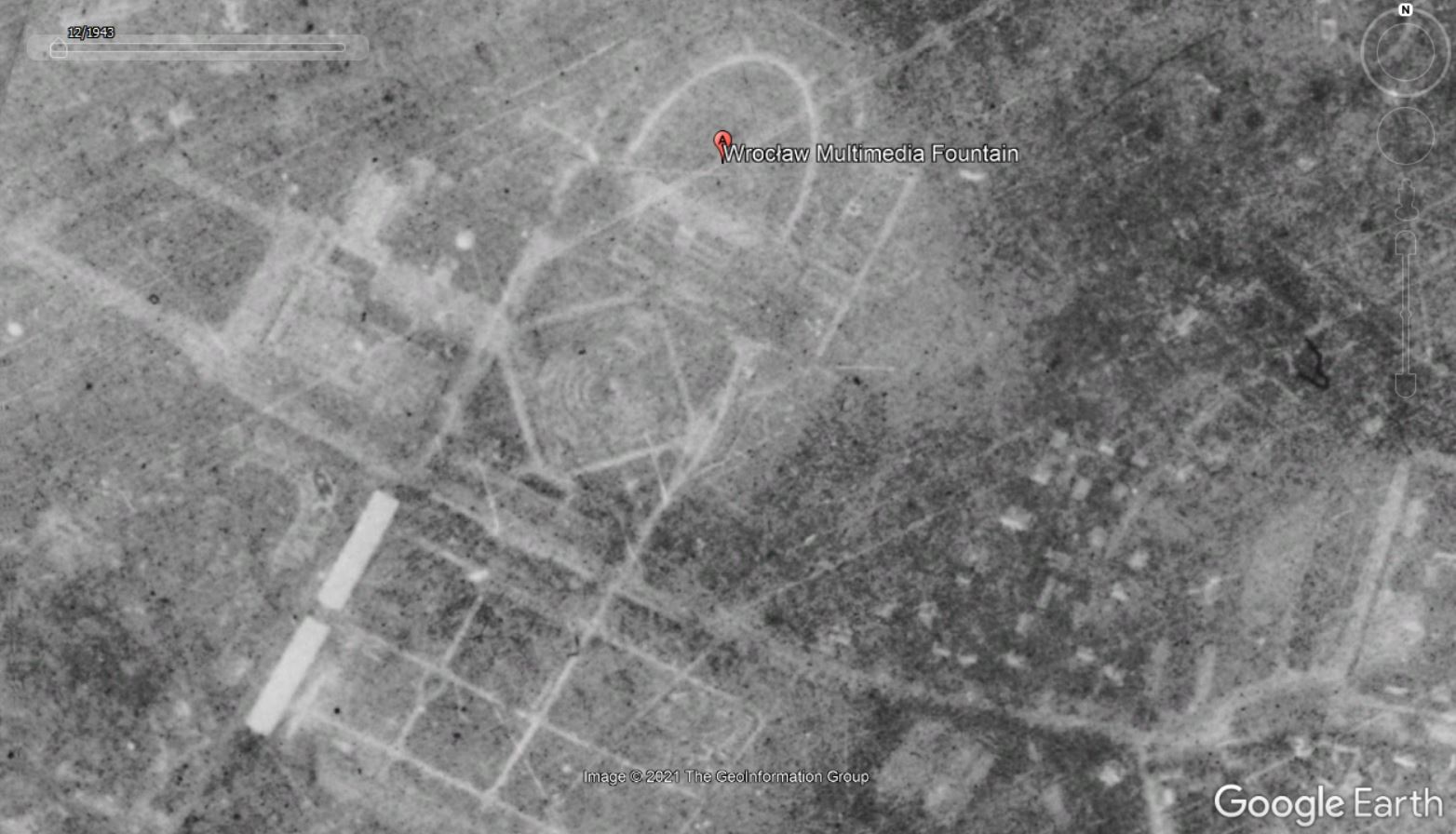 Centennial Hall in Wrocław was completed in 1913, the addition of an impressive multimedia fountain on the grounds does not distract from the longstanding beauty of the Japanese garden on the premises or the building which was first known as Hala Ludowa or the People's Hall.Google Earth 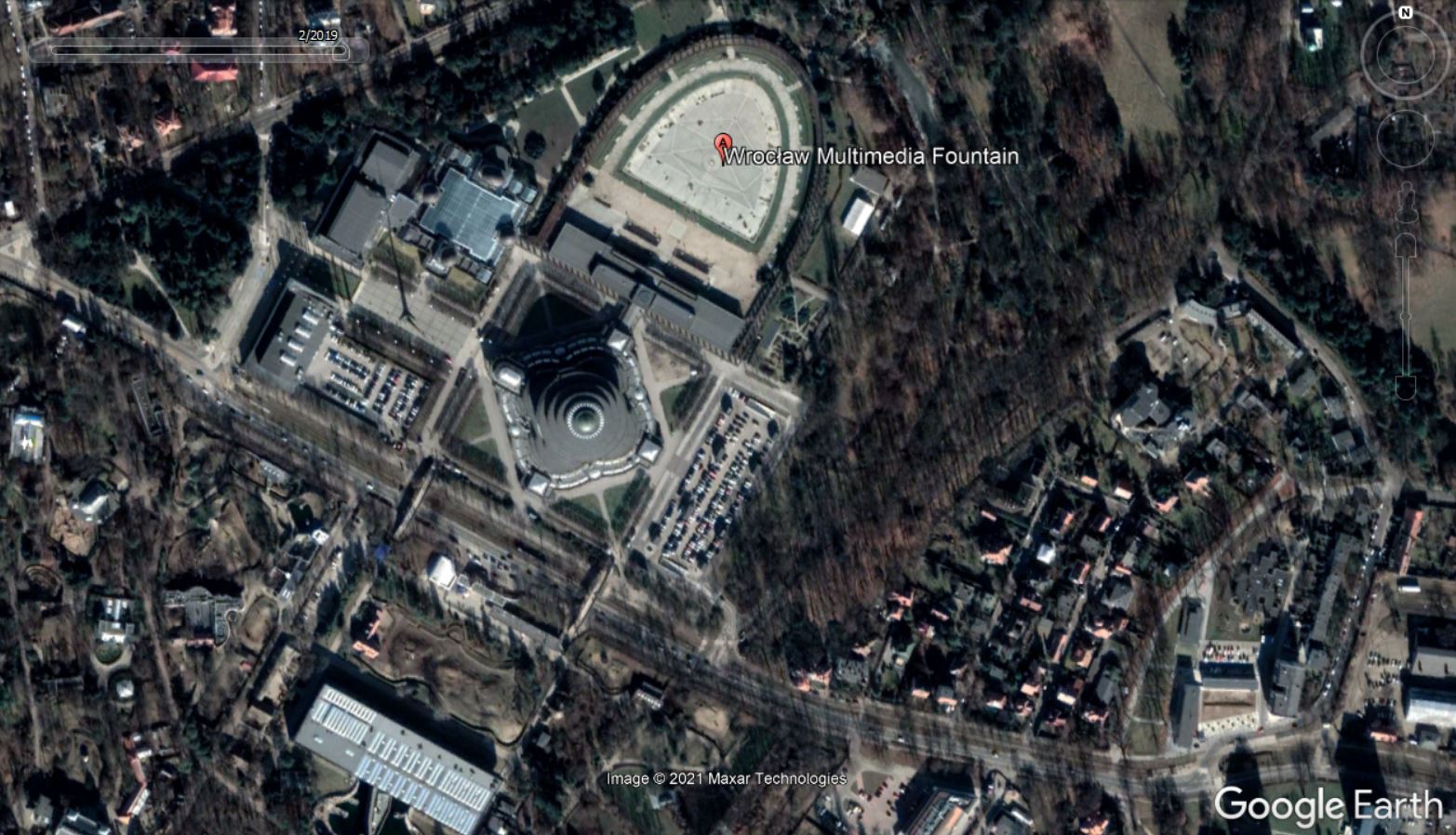 In 2006 the building was added to the list of UNESCO World Heritage Sites and it is also on the list of Poland’s protected monuments. While it is popular with tourists it is often used for sporting events and can hold up to 10,000 spectators.Google Earth 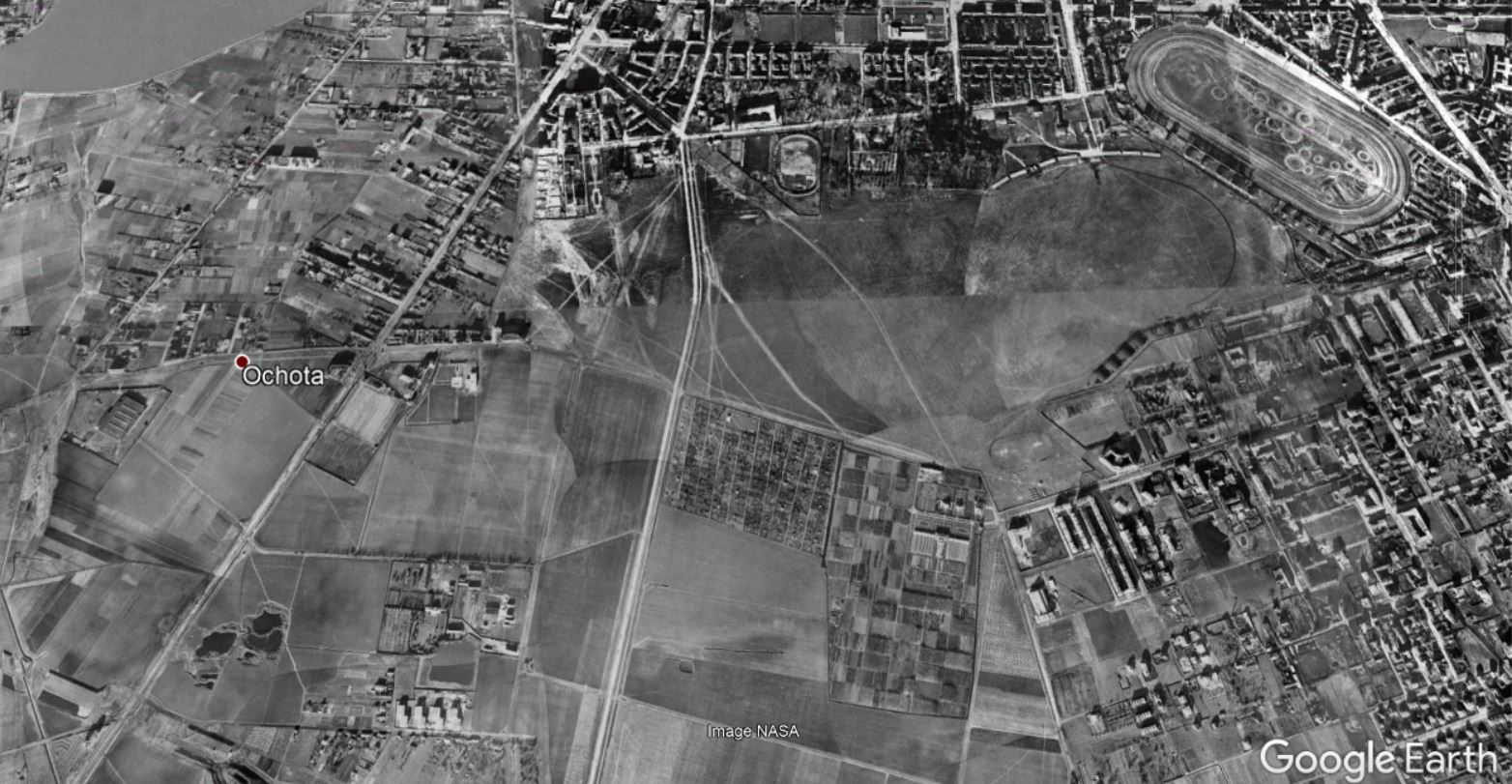 This shot shows districts of Warsaw known as Ochota, Old Ochota, Old Mokotów, Filtry and Rakowiec in the 2020 image but in 1935 much of the housing was only fields.Google Earth 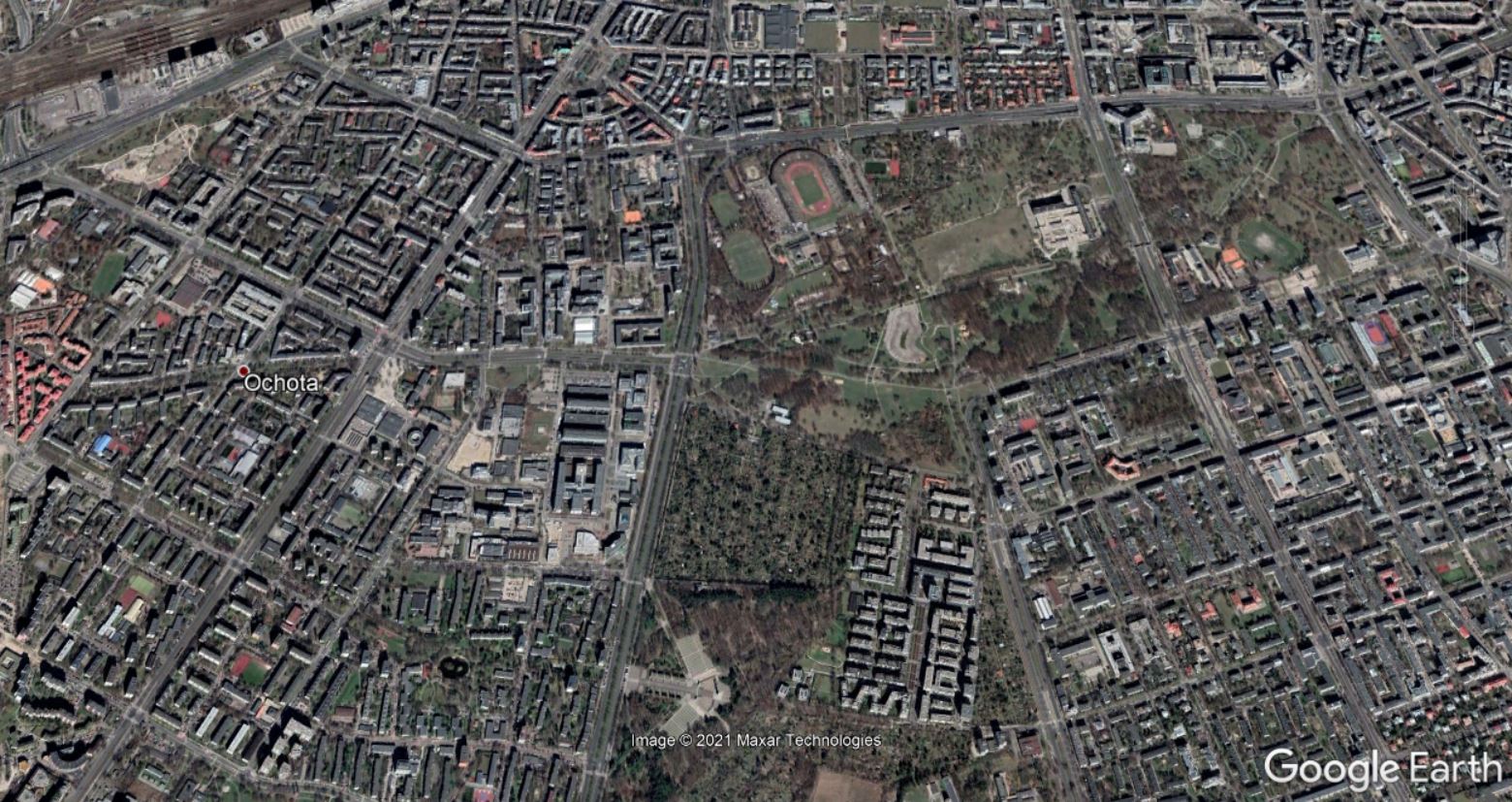 The area of Filtry and Pole Mokotowskie park have largely remained unchanged while there has been an influx of residents in the other districts. At the bottom of the 2020 image in the centre we can see the huge monument built at the Soviet Military Cemetery, also known as Mausoleum Park.Google Earth 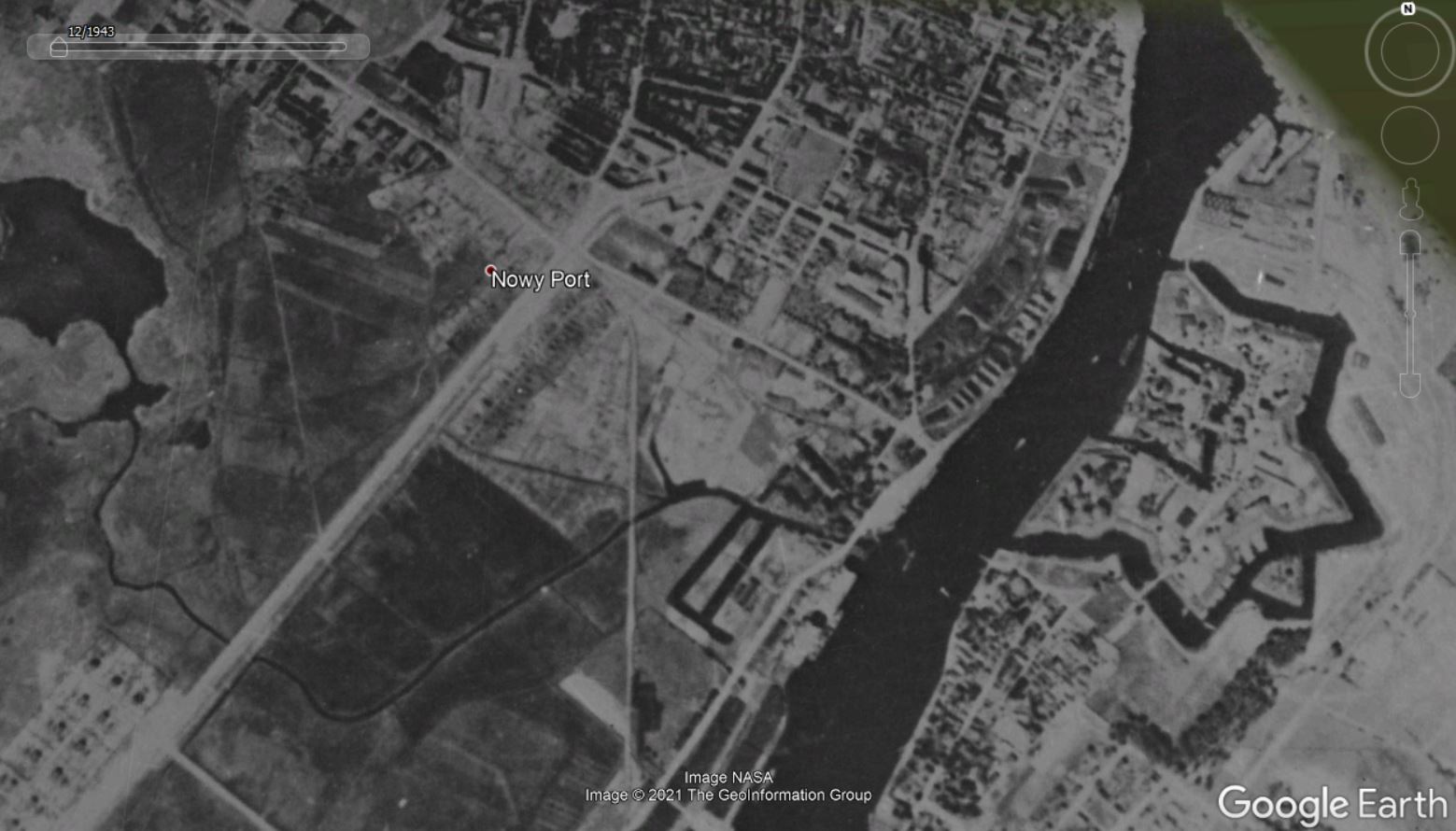 The Nowy Port district of Gdańsk is over the river from the iconic Wisłoujście Fortress which was first built in 1308.Google Earth 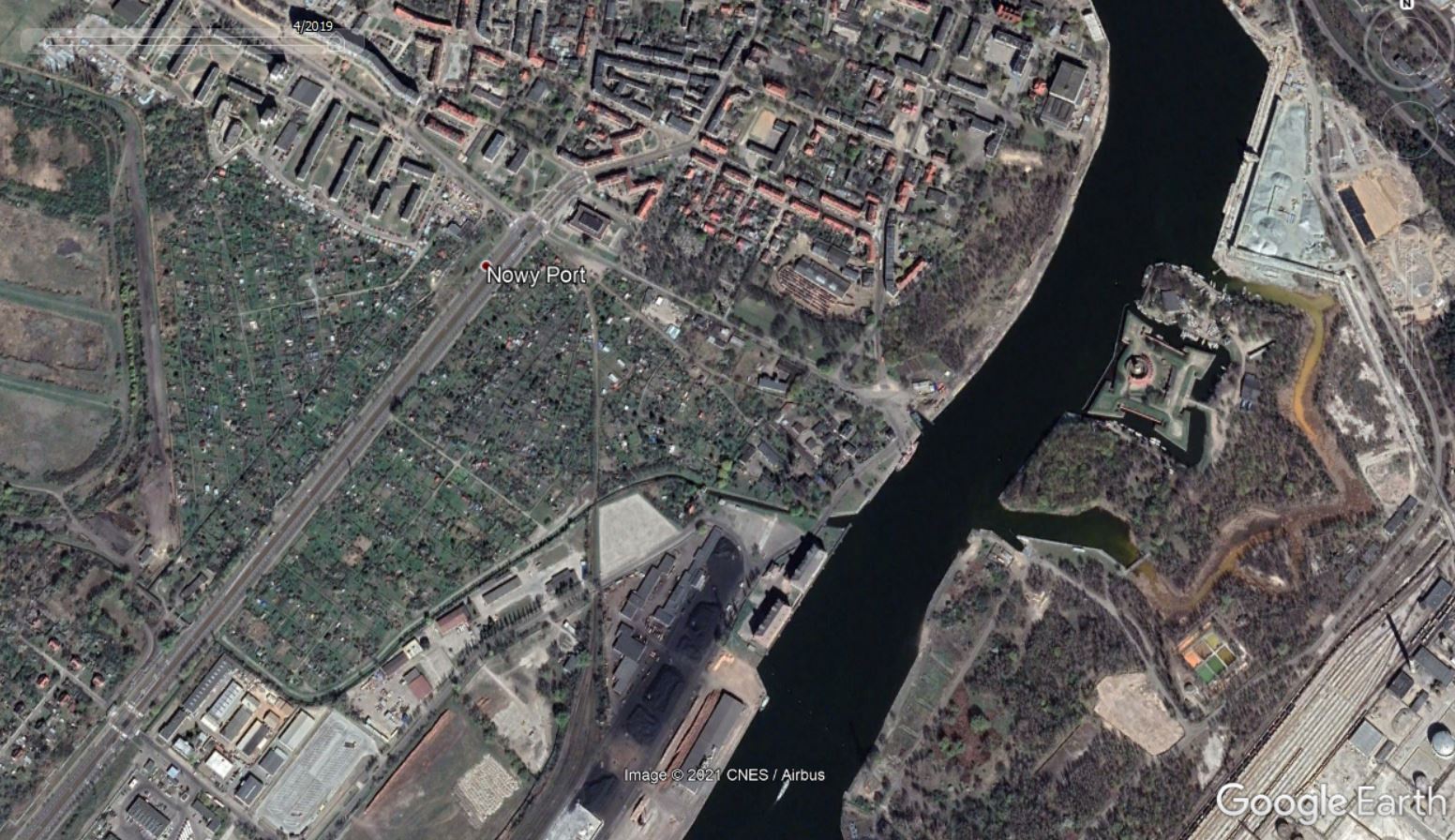 Now part of the Gdańsk museum, sea battles are put on for spectators every summer and visitors are allowed between May and September. While industry in the area is less significant than before the war, as many factories have closed down, the Nowy Port region has grown as a residential community.Google Earth 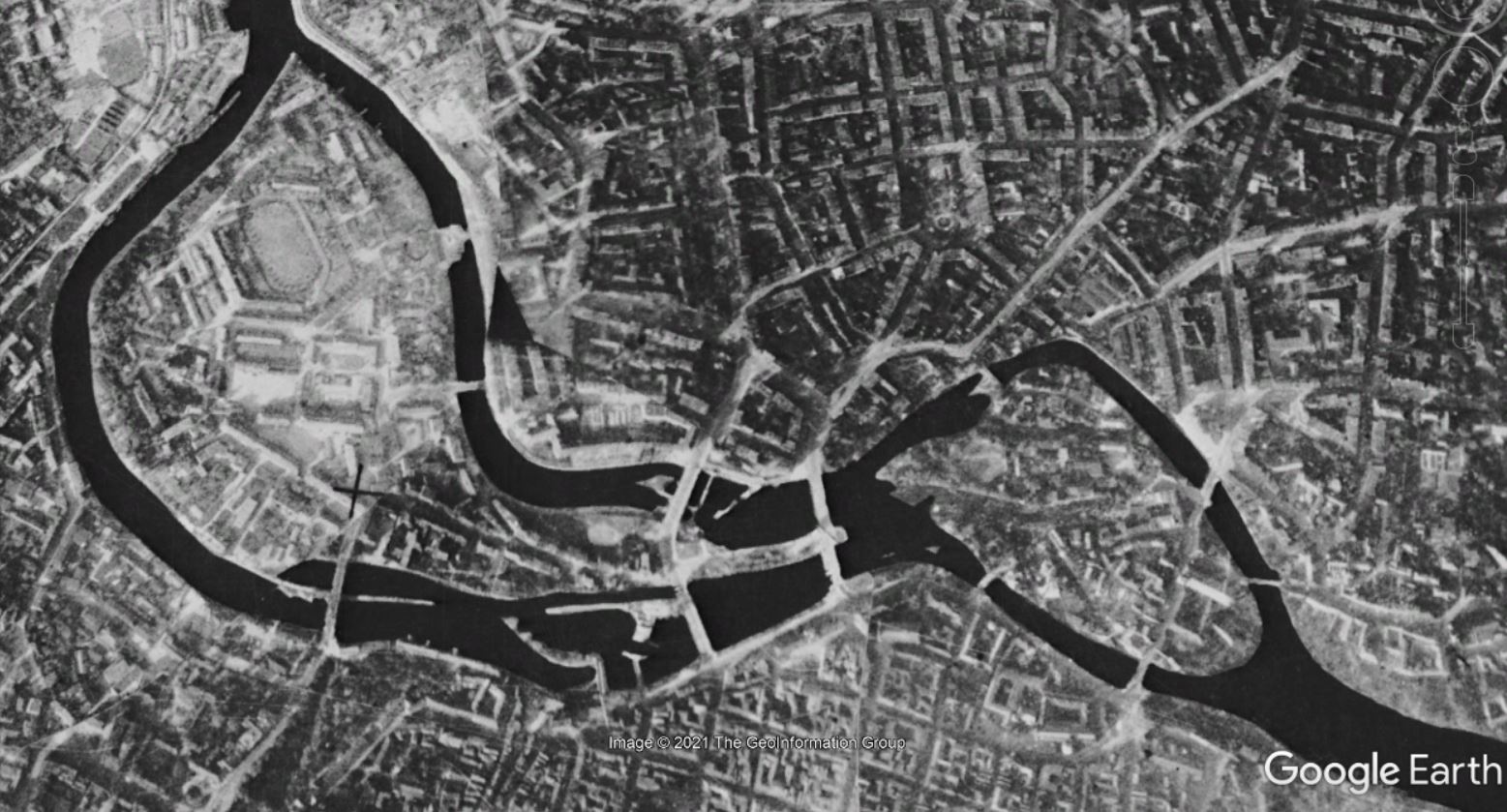 The Oder river that runs through Wrocław has many islands which are used for marinas and the whole island of Bielarska is a park with a number of playgrounds and activities for children.Google Earth 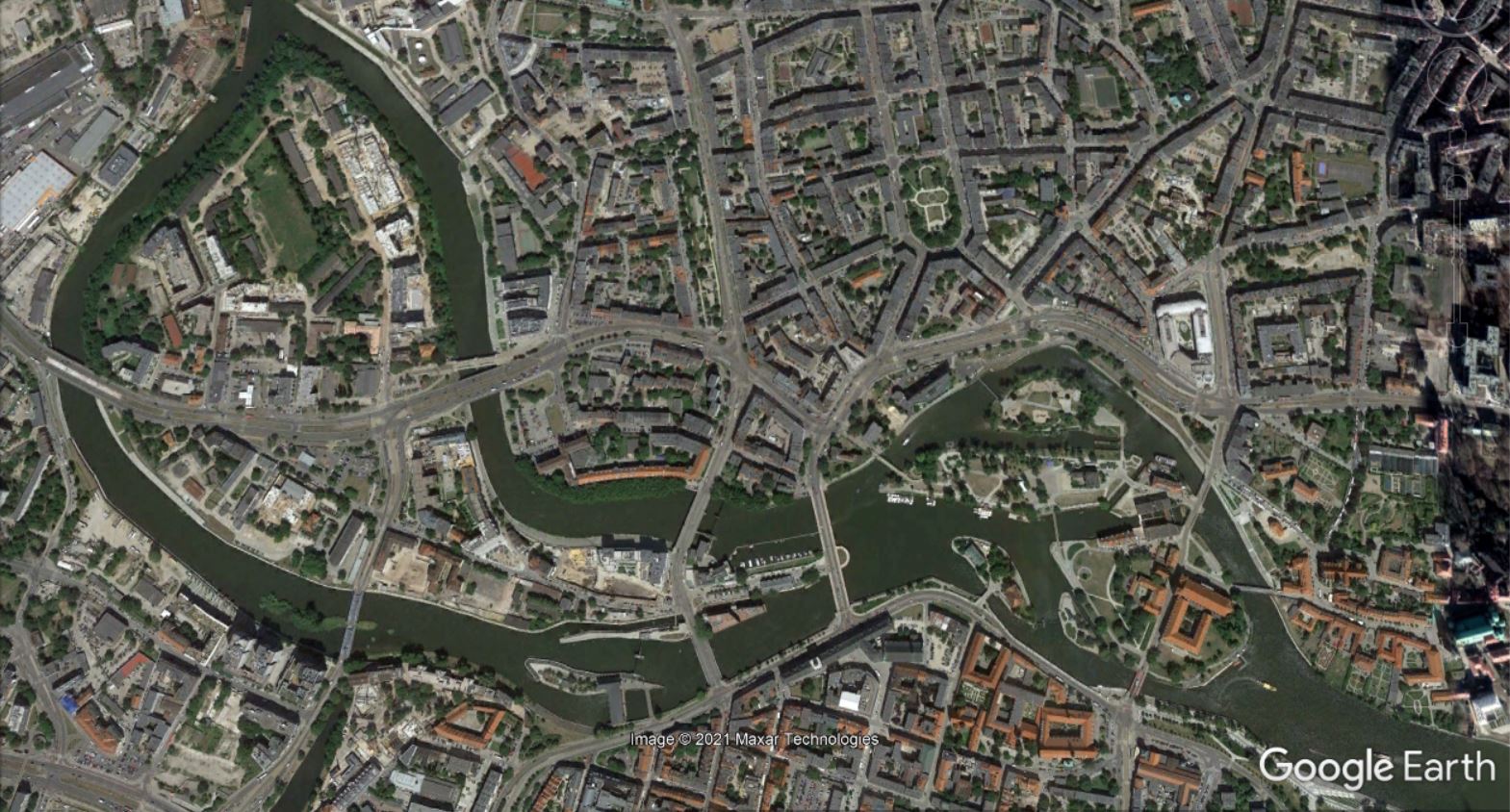 While on the Piasek island there is a church complex and grounds. The shape of the islands has undergone significant change and a bridge and road have been added to improve access. Park Mieszczański on the larger island on the left has remained untouched so far but could be developed next year into a more attractive ‘Central Park’ according to Mayor Jacek Sutryk.Google Earth

Using the most recognizable works from the canon of Chełmoński, Gierymski and Kossak among others, Wojciech Januszczyk used 15 famous landscape paintings as the basis of his project before adding a plethora of billboards to these classics.

Almost half of Poles oppose taking in refugees - poll