Getting to the ‘art’ of the matter in Gdańsk

Rarely does a town’s train station announce the city it represents more accurately than Gdańsk Główny.

Though currently subject to a painstaking restoration, the imperious sense of majesty it imparts harkens to the golden years of travel: when gentlemen would arrive via steam laden with top hats and trunks.

Yet if the station’s elegant towers and intricate rooftop decorations act as a precursor for the historic centre right up ahead, it is the city’s lesser-known side that has come to most truly reflect Gdańsk’s modern dynamic: use Zaspa as an example. 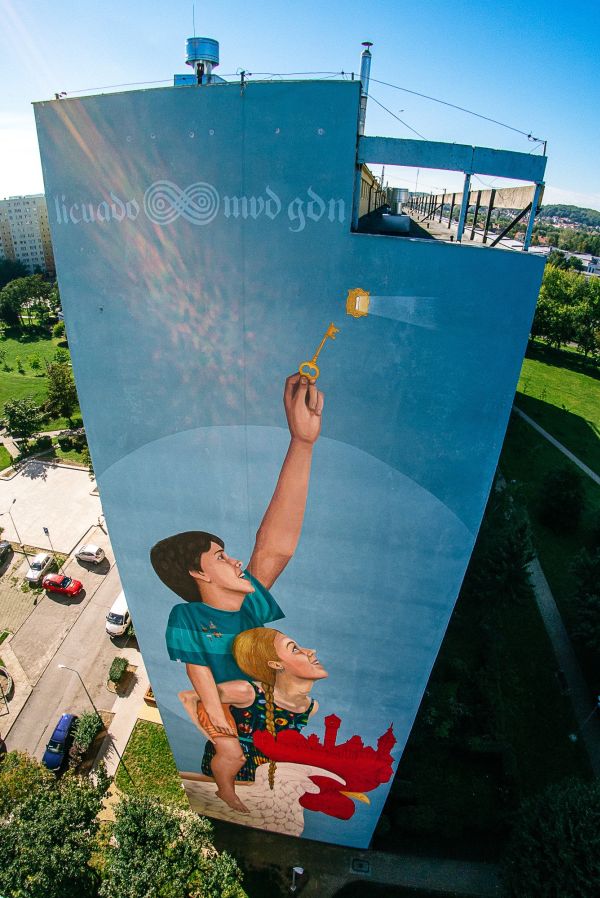 A clear source of pride, the murals have galvanized the locals in unexpected ways.Jarosław Orłowski/ Instytut Kultury Miejskiej

Built on what was once the site of a sprawling airfield, one of Poland’s largest housing estates was developed at the height of the PRL according to the founding tenets of modern, urban planning. But what had been envisaged to become a “self-sustained machine for living” fell victim to Poland’s economic implosion in the 80s – where architects had dreamed of a happy community living in utopian bliss, the reality saw the delivery of a concrete jungle comprised of anonymous tower blocks that echoed the desperate gloom of the era.

The freedoms offered by the political transformation did nothing to alleviate Zaspa’s lingering social issues and it wasn’t long for this district to become little more that yet another footnote in the list of failed urban projects – until, that is, art intervened.

The brainchild of artist Rafał Roskowiński, it was on his behest that a mural project was first in 1997 organized to coincide with the city’s 1,000th birthday and inject the forgotten suburb with the kind of colour that it so clearly lacked. 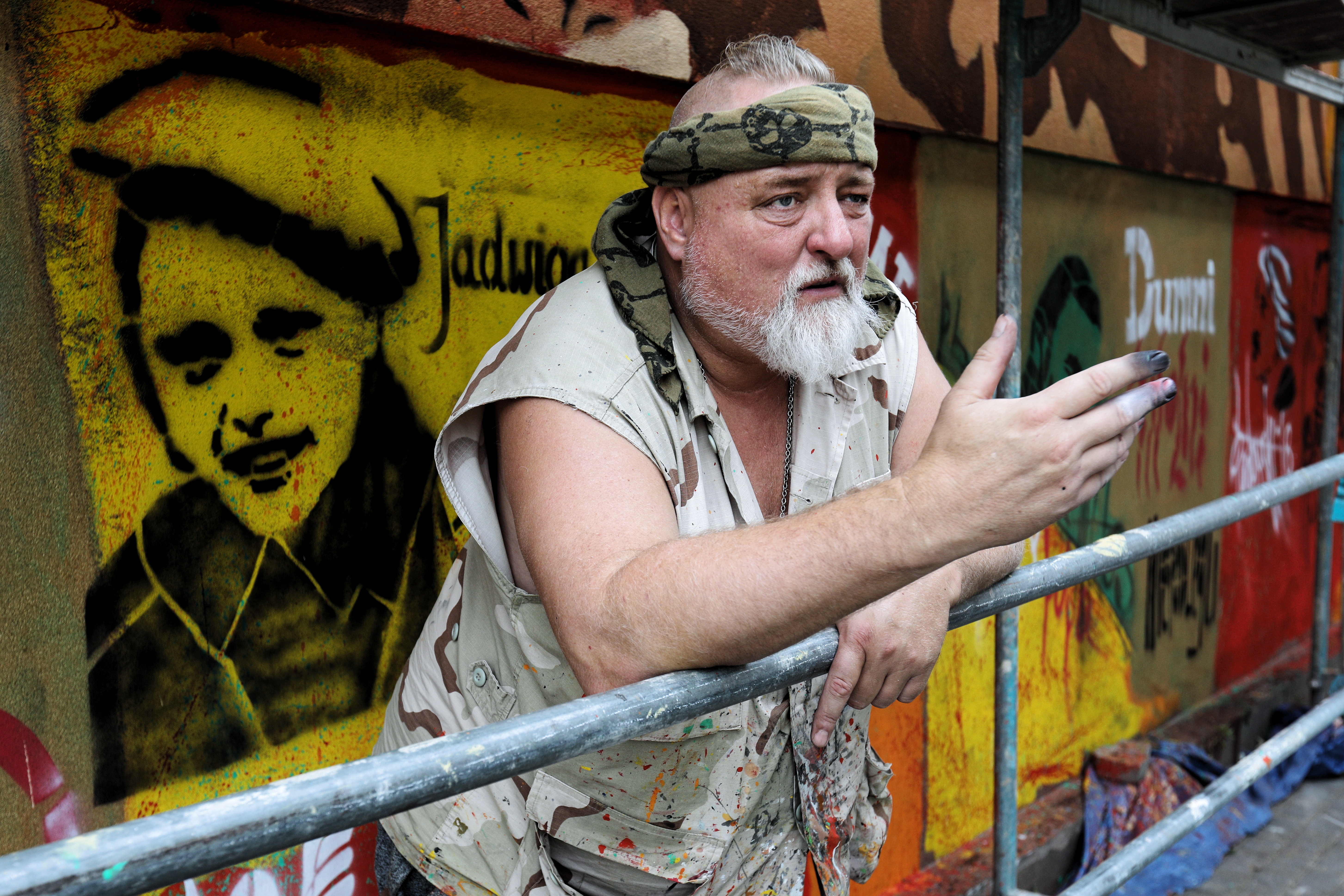 The brainchild of artist Rafał Roskowiński, it was on his behest that a mural project was first in 1997 organized to coincide with the city’s 1,000th birthday and inject the forgotten suburb with the kind of colour that it so clearly lacked.Artur Reszko/PAP

“This was a time when most people didn’t have the internet,” says Barbara Sroka, one of the project’s coordinators, “and on top of that street art represented something of an unknown medium.”

Despite these challenges, Polish embassies across the world were persuaded to appeal to street artists and soon a collection of willing participants were assembled: hailing from Mexico, the United States, Lithuania and Poland, they created ten individual works many of which provided direct or indirect reference the city’s rich history.

Piotr Bondarczyk, for instance, created one XL mural depicting Clark Gable’s kiss in Gone With The Wind, a work that many interpreted as being symbolic of Lech Wałęsa’s smooch with his wife Danuta – a moment famously captured by photographer Chris Niedenthal during Solidarity’s heyday. 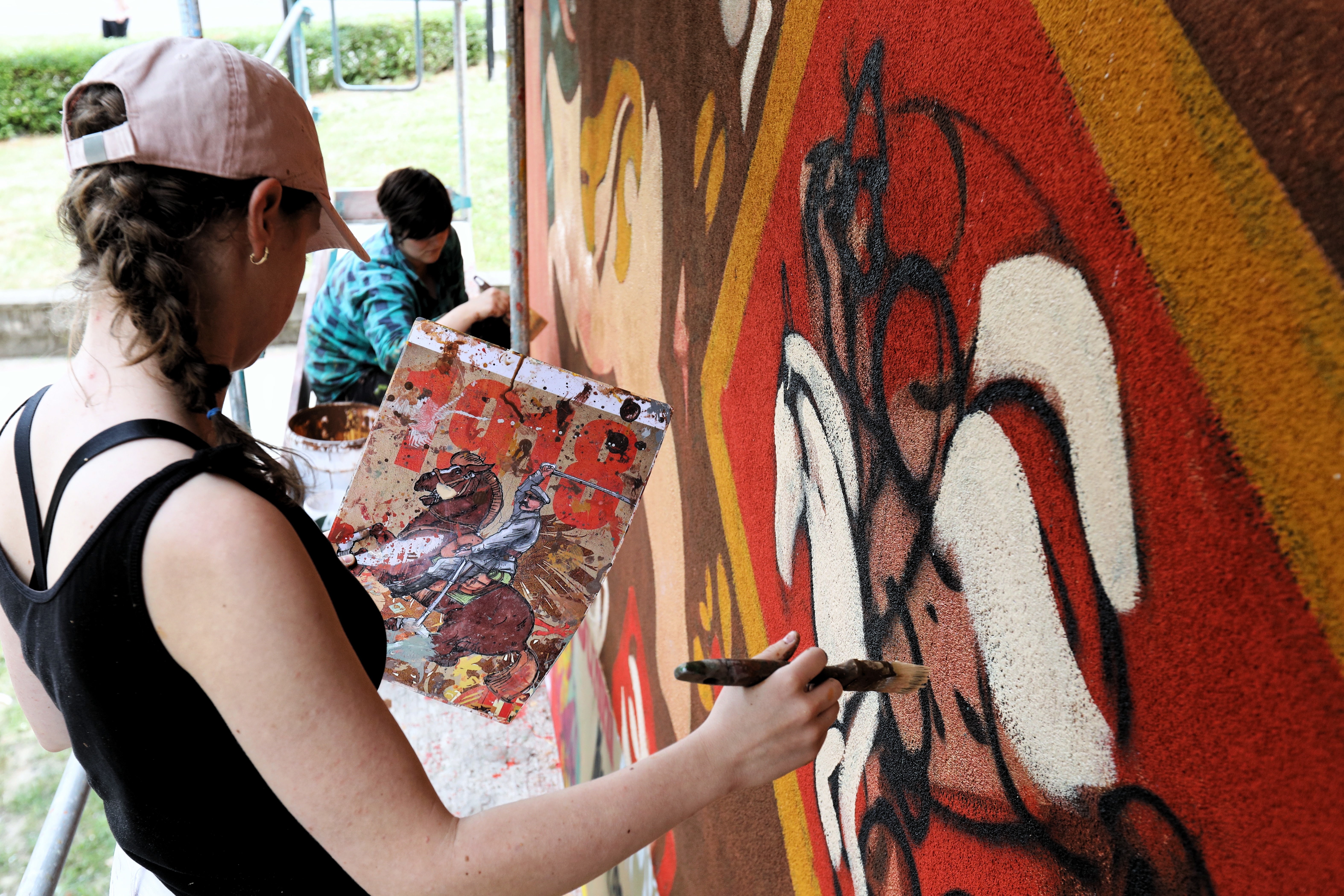 A collection of willing participants from Mexico, the United States, Lithuania and Poland created ten individual works many of which provided direct or indirect reference the city’s rich history.Artur Reszko/PAP

Simultaneously, Chicago-based Tim Portlock painted a bird’s eye view of the Bay of Gdańsk but made the mistake of overlooking the Hel Peninsula: with the rest of the mural complete, a crane was hastily pressganged into service to allow the artist to correct his error.

“For Rafał it was important to lend life to the blind walls of Zaspa,” Sroka tells TFN. “He realized that these blocks would be the perfect canvas for murals.”

Proving a thundering success, what had originated as the country’s first international mural initiative soon gathered steam. While more were added in the following years, it wasn’t until 2009 that the project found itself fully revived with the creation of the Monumental Art Festival. 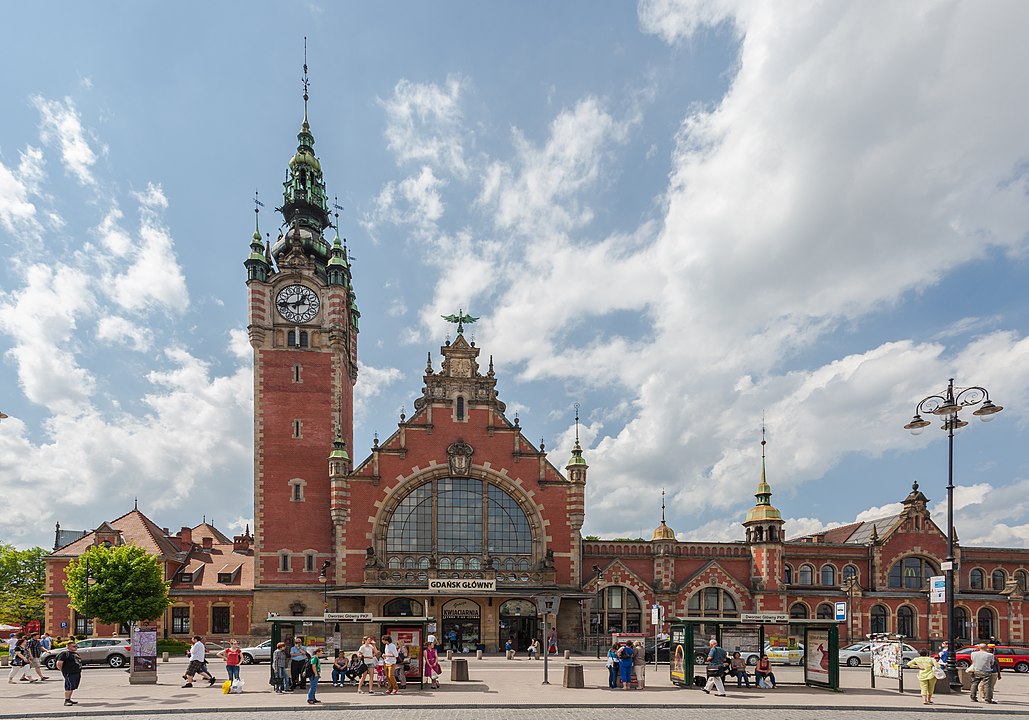 Gdańsk train station’s elegant towers and intricate rooftop decorations act as a precursor for the historic centre right up ahead, but it is the city’s lesser-known artistic side that has come to most truly reflect Gdańsk’s modern dynamic.Diego Delso/CC BY-SA 3.0

“This was launched as part of Gdańsk’s bid to become Europe’s Capital of Culture in 2016,” says Sroka, “so for eight editions artists were recruited to paint the walls of Zaspa.”

Many of the resulting works covered topics close to local hearts (e.g., anniversaries marking the outbreak of WWII, the roundtable talks held between Solidarity officials and the Communist authorities or, even, Poland’s first rock’n’roll concert which took place in Gdańsk).

Other editions, meanwhile, prompted artists to answer such searching questions as “Is Everything For Sale?” or “Where Are We Going?” 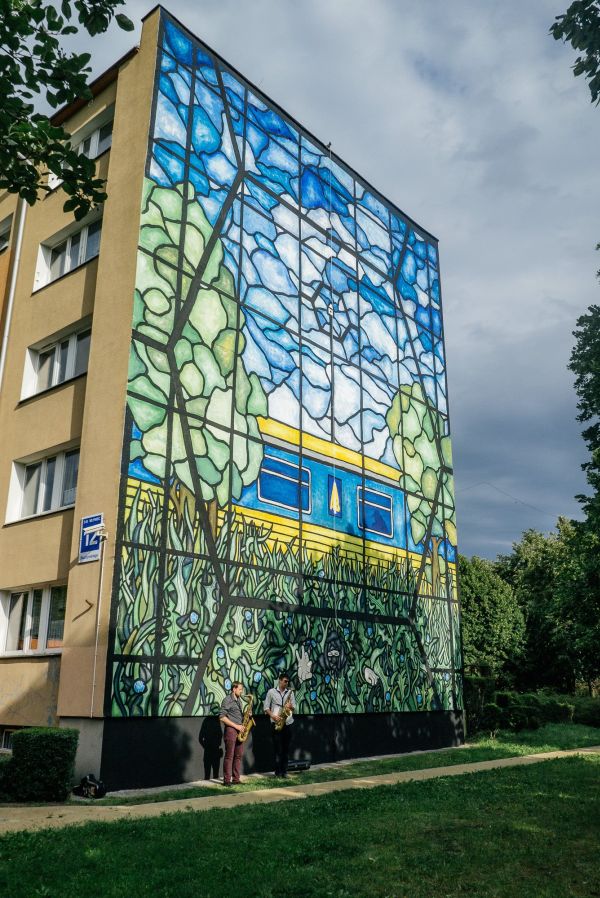 The murals have placed an unsung area once associated with urban blight firmly on the map.Jarosław Orłowski/ Instytut Kultury Miejskiej

According to Sroka, however, fear of oversaturating the area always meant that 2016 would act as the festival’s natural cut-off point.

“From the outset we never wanted to continue beyond that date,” she says, “because whilst Zaspa still has lots of blank walls we realized that too much colour would result in the murals losing their effect – you shouldn’t paint everything.”

The final effect has been staggering in its scope and if the paint pots have long since run dry, the general level of interest most certainly has not. Reputed to be the world’s largest “gallery” of outdoor murals, over sixty now decorate the once tomb-like blocks of Zaspa drawing tourists, TV crews and journalists from around the globe. Often soaring ten-stories in the air, these mighty works have done more than simply humanize the area. “They’ve given Zaspa an identity,” says Sroka. 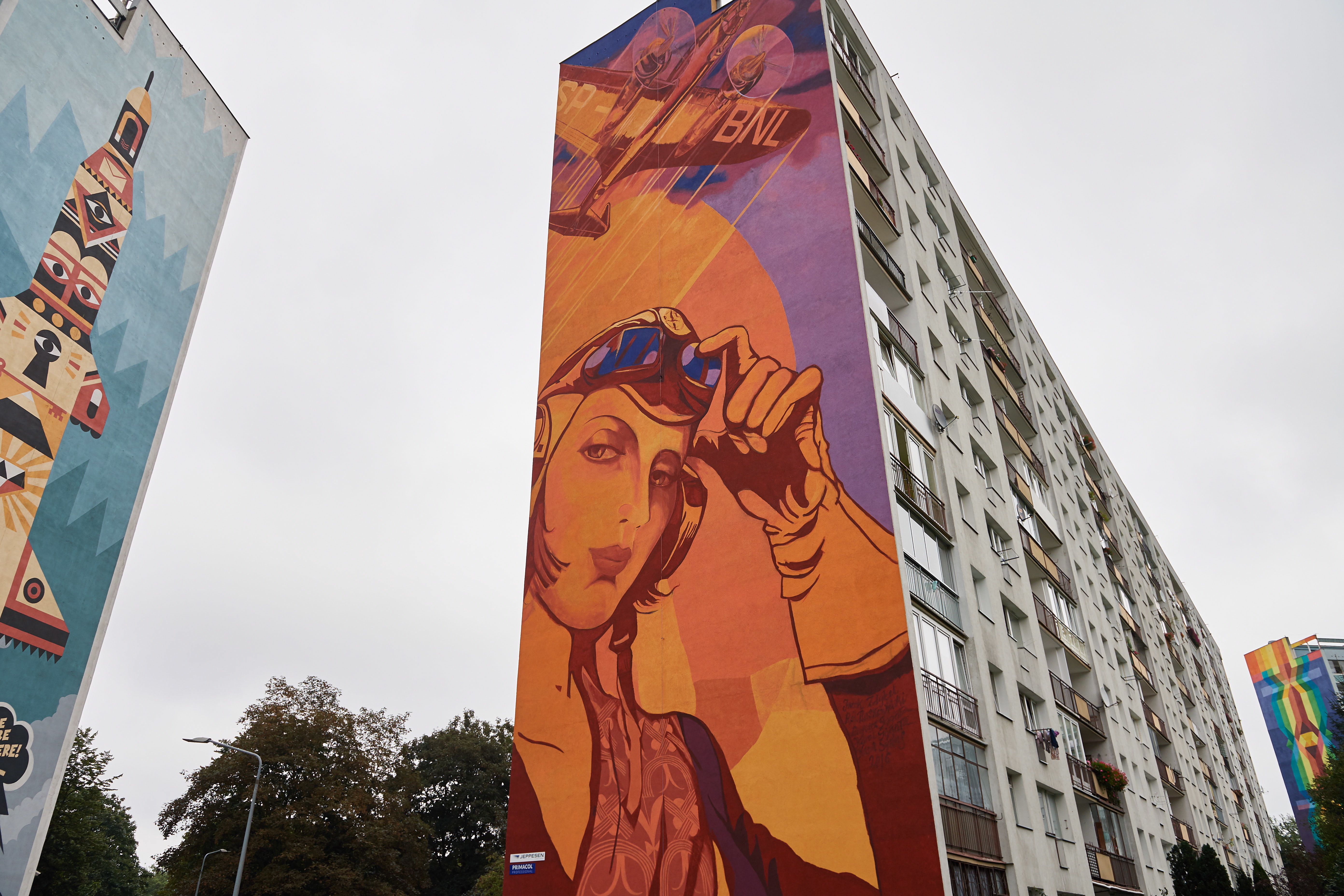 A clear source of pride, the murals have galvanized the locals in other unexpected ways. Free tours are conducted regularly by residents and feature tales of the neighbourhood and other such informational nuggets related to local lore. More so, they’ve placed an unsung area once associated with urban blight firmly on the map.

“If asked to think of Zaspa,” says Sroka, “many Poles will know that Lech Wałęsa once lived here or that Pope John Paul II celebrated a historic mass here in 1987. Last but not least, an increasing number of people now know about the murals.” 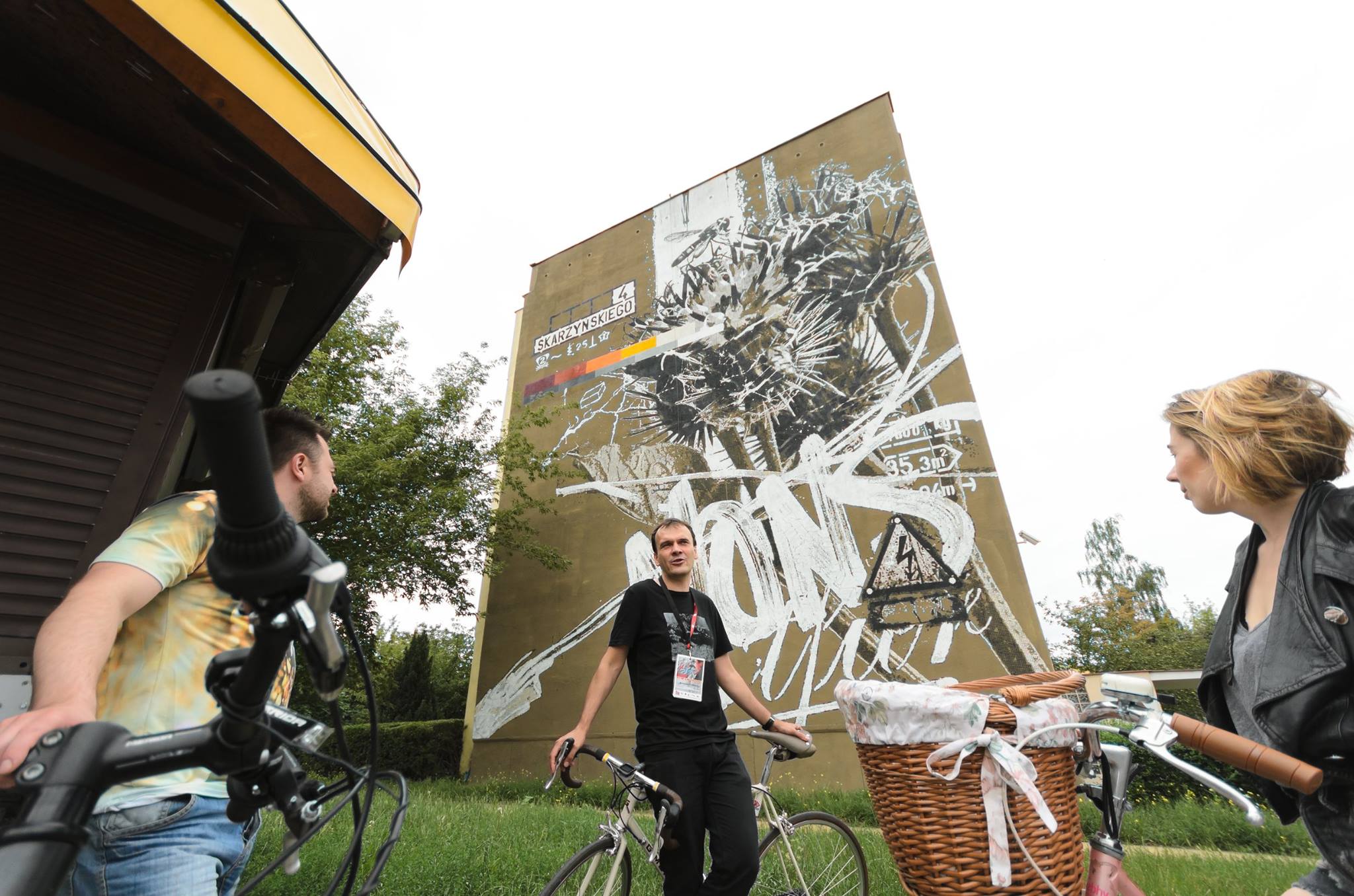 A clear source of pride, free tours are conducted regularly by residents and feature tales of the neighbourhood and other such informational nuggets related to local lore.Paweł Raczyński/ Instytut Kultury Miejskiej

EIP trains run on routes from Warsaw, Kraków, Katowice and Rzeszów. In addition, direct connections to Gdańsk run from, among others, Wrocław, Poznań, Łódź, Olsztyn and Szczecin. PKP Intercity also offer international connections to such destinations as Berlin and Vienna.

This article has been sponsored by PKP.