The German parliament decided on Friday that a memorial site for the Polish victims of World War II and the German occupation in Poland will be created in Berlin.

The decision is an important step in creating what will be the only World War Two memorial in Berlin dedicated to a single nation.

German parliamentarians said in the debate that they hope the monument will fill a “blank space in German memory”.

They recalled that the German occupation of Poland was “unique in its cruelty” and that not a single Wehrmacht soldier, SS member or police officer had been convicted by a German court for crimes committed in Poland.

Zbigniew Rau, the head of the Polish Ministry of Foreign Affairs, assessed the decision of the Bundestag as “a long-awaited step in the right direction”. 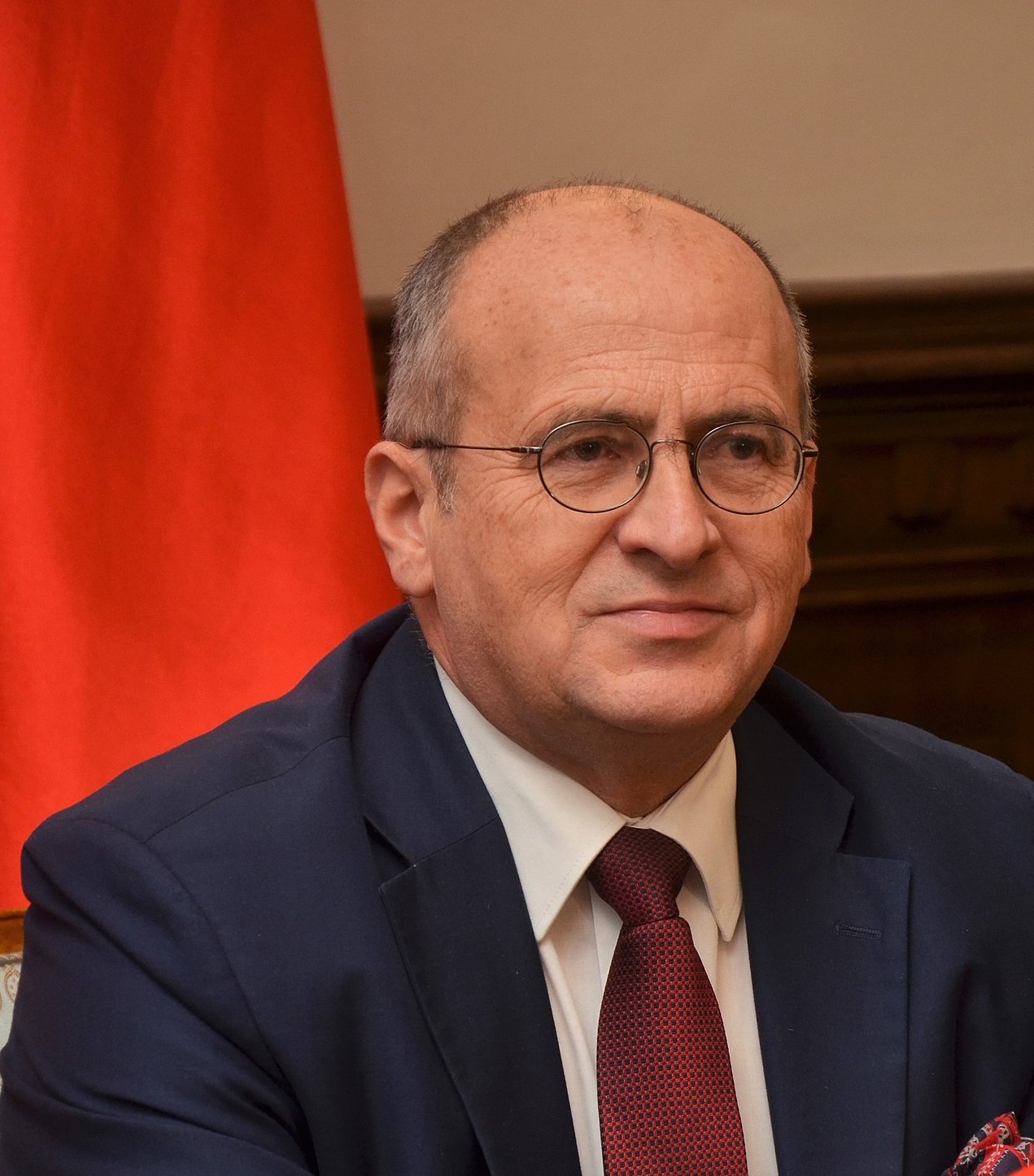 Zbigniew Rau, the head of the Polish Ministry of Foreign Affairs, assessed the decision of the Bundestag as “a long-awaited step in the right direction”.wikicommons

The authors of the proposal to create the memorial were four groups: CDU/CSU, SPD, FDP and Alliance 90/Green. The right-wing populist AfD abstained from voting.

The motion calls on the Federal Government to establish a memorial in the German capital to the Polish victims of World War II.

According to the parliamentarians, the place is to be not only a tribute to the fallen Poles, but also a proof of today's friendship between the German and Polish nations.

The applicants and the left-wing parliamentary faction voted in favour of the initiative to create a “memorial and meeting place to do justice to the character of German-Polish history and to contribute to the deepening of special bilateral relations.” 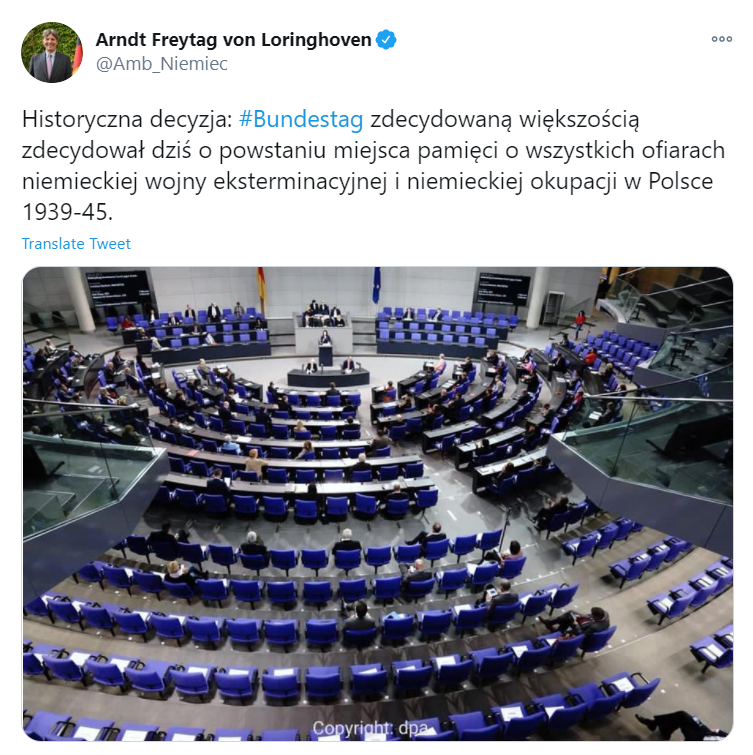 The German ambassador to Poland, Arndt Freytag von Loringhoven, tweeted his approval of this “historic decision”.Twitter

Referring to the decision of the Bundestag, the head of the Polish Foreign Ministry wrote on Twitter: “Today, the Bundestag has committed the government to commemorate the Polish victims of World War II in Berlin, emphasizing in a cross-cutting resolution the special, criminal nature of the German attack on Poland and its occupation. This is a long-awaited step in the right direction.

During the discussion on the motion, German Foreign Minister Heiko Maas recalled his visit to Poland last year on the anniversary of the Warsaw Uprising.

“One German newspaper wrote at the time that I was at the anniversary celebrations of the Warsaw Ghetto Uprising,” he said.

In his opinion, this mistake shows how big “the scale of ignorance about the history of World War II is and the suffering of Poles during the German occupation”. 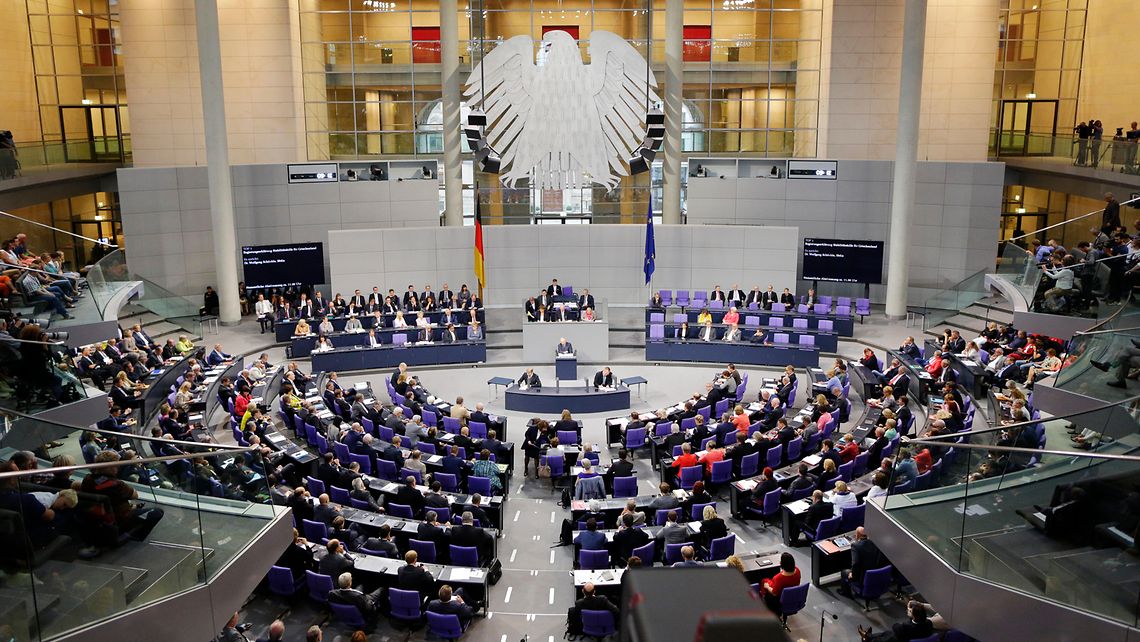 During the debate, German politicians expressed hopes that the monument would fill a “blank space in German memory”.bundestag.de

The German ambassador to Poland, Arndt Freytag von Loringhoven, whose father served Hitler in his bunker in Berlin in 1945, trumpeted the decision by German parliamentarians on Twitter.

“A historic decision: the #Bundestag decided by a large majority today to create a memorial to all victims of the German extermination war and German occupation in Poland 1939-45,” he wrote.

The debate saw an avalanche of warm words directed towards both Poland and Poles not heard for a long time in the Bundestag.

“In 1939-45, Poland became the cemetery of European civilization. By creating this memorial site, we are reminded of what man is capable of,” said Paul Ziemak, secretary general of the CDU. 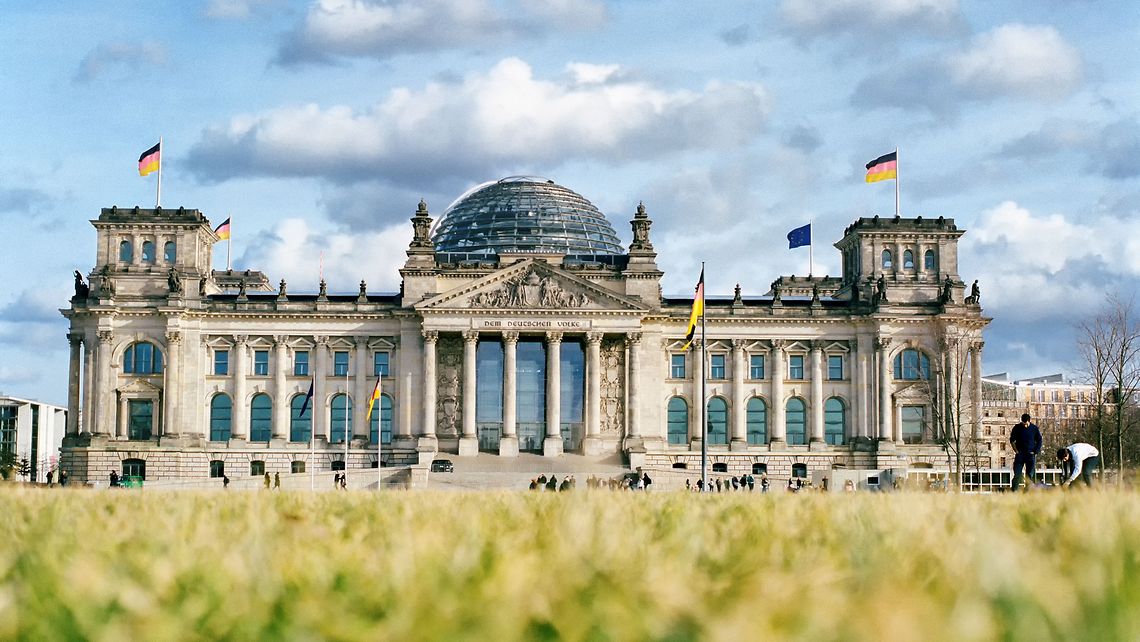 Four groups pushed for the creation of the memorial: CDU/CSU, SPD, FDP and Alliance 90/Green. The right-wing populist AfD abstained from voting.bundestag.de

In his emotional speech he recalled Witold Pilecki, who voluntarily became a prisoner in Auschwitz so as to report on the crimes committed by the Germans.

“We are not only building this monument for Poles. We are doing it for ourselves, to remind us,” he said to peels of applause from German parliamentarians.

Ziemiak referred to his Polish history. He was born in 1985 in Szczecin. His parents escaped to Germany when he was a small child. He talked about his dead grandparents who fought in Polish uniforms during the war.

“If they had seen that Poles and Germans are now friends and could see their grandson, who is a German MP, they would be happy,” he said. 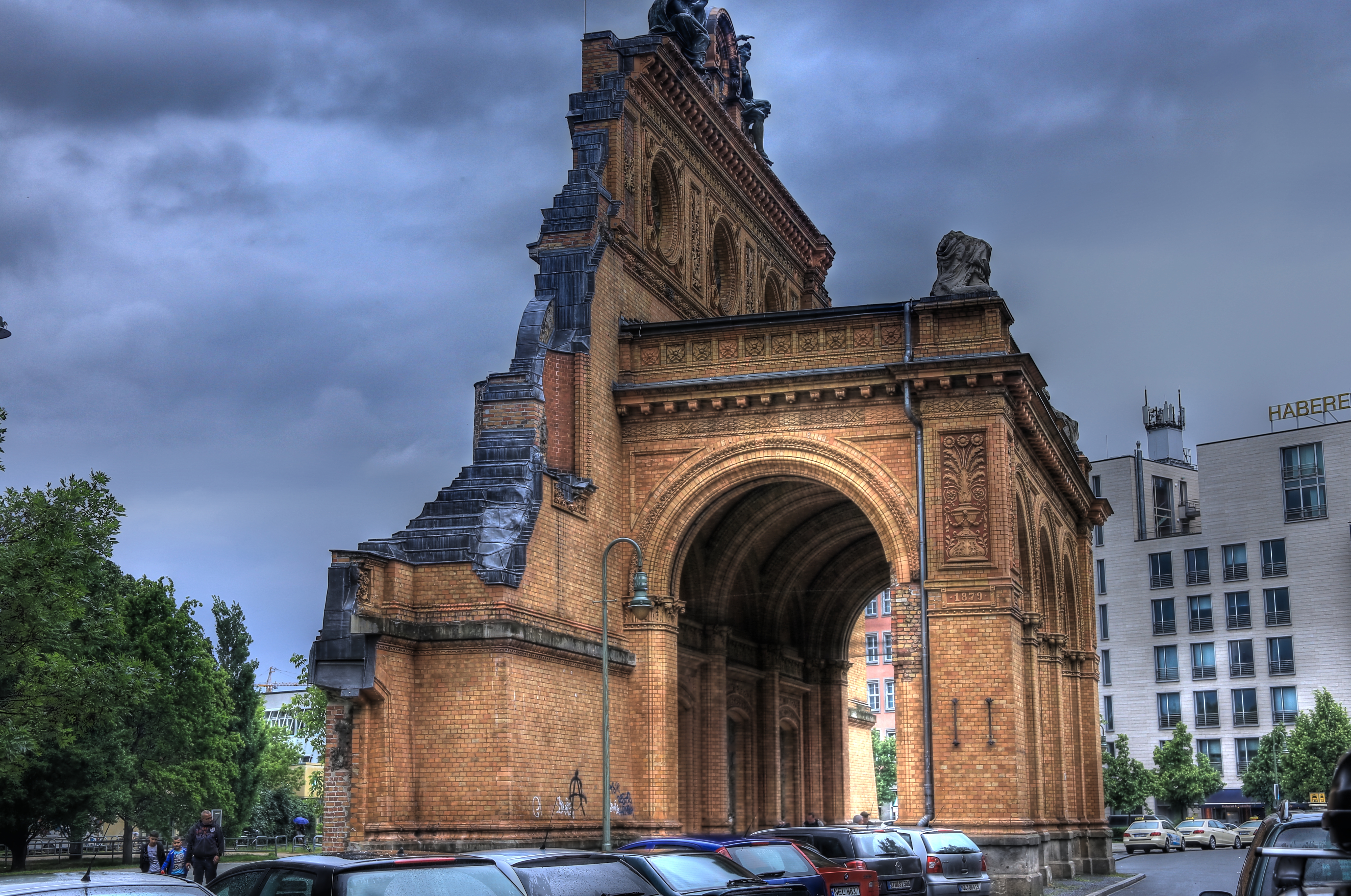 The memorial will be built on Askan Square in Central Berlin, a stone’s throw from the ruins of Anhalter station.wikicommons

Dietmar Nietan from the SPD reminded the chamber that no Wehrmacht soldier, SS member or German police officer serving in occupied Poland was convicted by a German court for crimes committed against Poles.

“We want to recall the suffering of Poles and ask for forgiveness so that the next generations confront it; so that what happened will not be forgotten,” he said.

Meanwhile, Manuel Sarrazin from the Greens said in turn that the history of the German occupation in Poland was unique in its cruelty

In November 2017, a proposal for such a monument in the German capital was made by retired German urban planner Florian Mausbach, former head of the Federal Office for Building and Urban Development. He called on the Bundestag to get involved in the project, but it took the parliament until now to take a position on the matter. 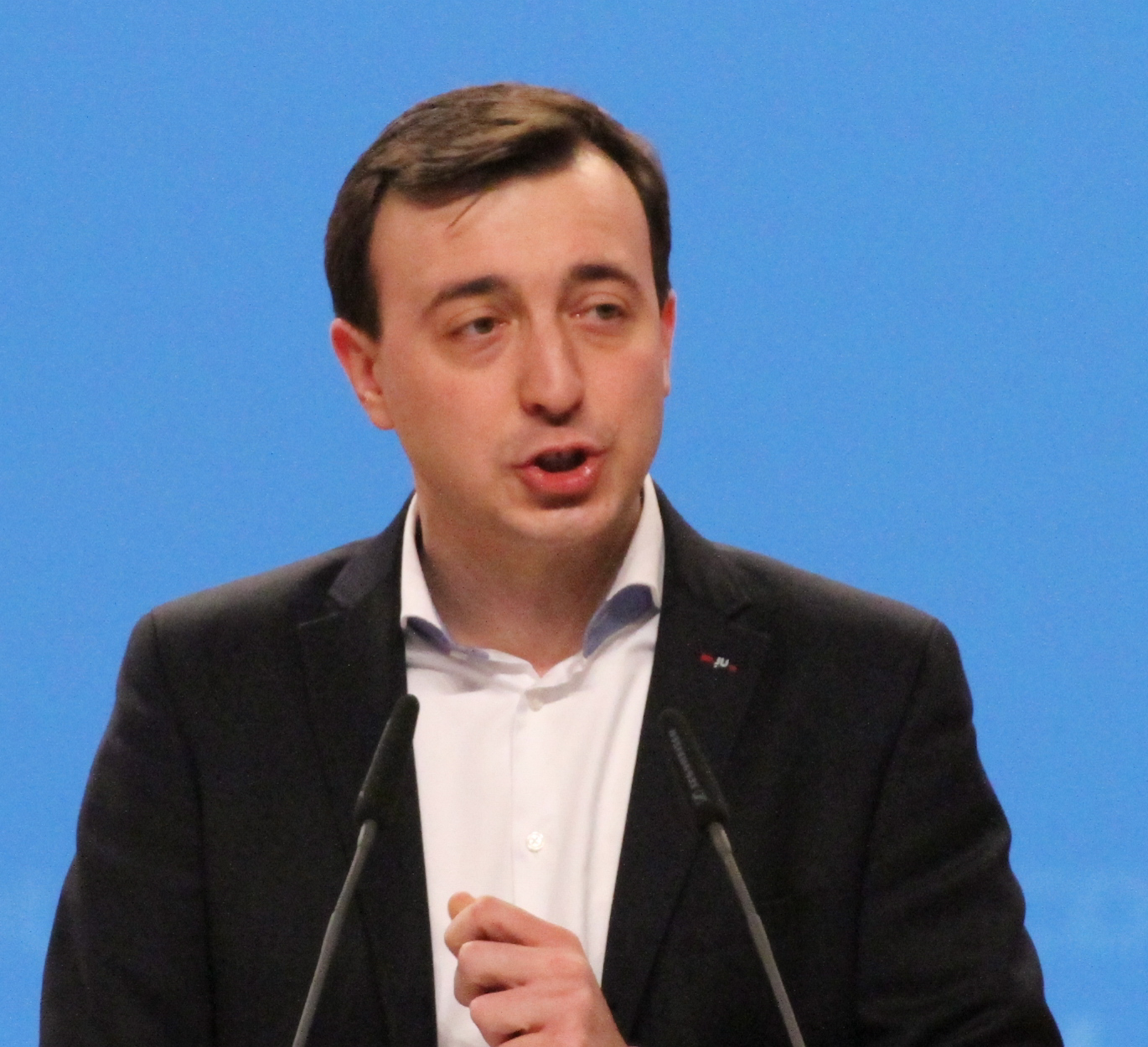 The Polish-born, German politician Paul Ziemak told parliamentarians that, “We are not only building this monument for Poles - we are doing it for ourselves, to remind us.”wikicommons

Many details of the Polish “memorial and meeting place” are yet to be determined. Only the location is known, on Askan Square in the middle of Berlin on a stretch of land where the Berlin Wall ran, by the ruins of Anhalter station.

In addition to the Polish memorial, there are plans to build a museum for all victims of the war and an exile museum commemorating the half a million people who managed to escape Nazi Germany in the vicinity.

Other sites related to the memory of World War II are nearby, including the Topography of Terror, a museum highlighting German institutions and Germans involved in the system of repression and murder.

This, in turn, is near the Holocaust Museum at the Brandenburg Gate, a memorial to homosexuals murdered by the Nazis, and a memorial to the murdered Sinti and Roma people – all of which are in the immediate vicinity of the buried ruins of Hitler's bunker.