Having lived long in the shadow of historic Gdańsk and party-loving Sopot, the northern sea port of Gdynia is finally experiencing its own turn in the spotlight thanks in part to an active artistic community that has helped raise the profile of the city through their unique portrayal of the town’s captivating spirit and architecture.

Channelling Poland’s rich tradition of graphic art, the works of these artists have helped Gdynia’s copious but often unsung charms reach an entirely new audience and, in the process, boosted the city’s standing as something of a crucible of creativity. 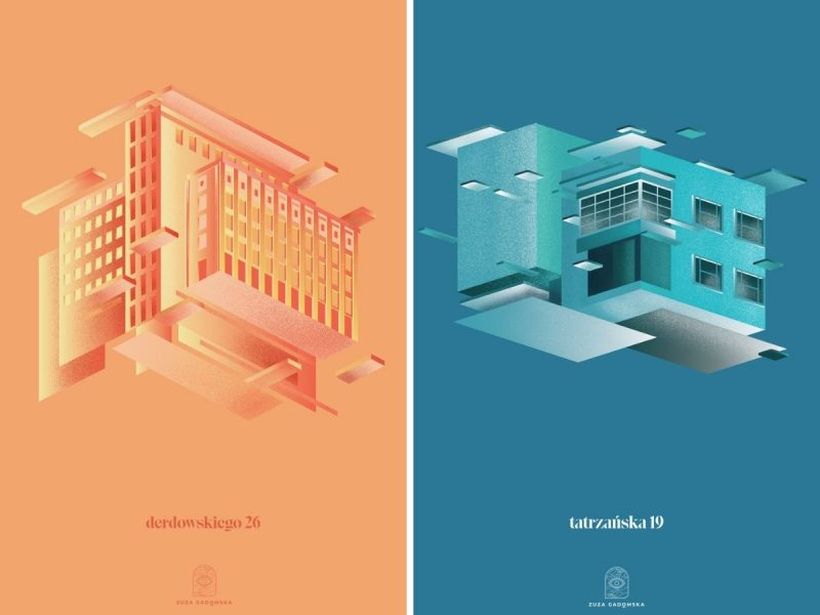 In her works, illustrator, designer and architect Zuza Gadomska has done more than most to bring the city’s vibrancy to the fore via her Gdynia In Colour series. “In my architectural-related works I focus on the heritage of modernism,” she tells TFN.Zuza Gadomska

Seeking to reconcile manual methods (pencil and fineliner) with digital processes, Jan Rutka is one such artist with his highly intricate, multi-layered depictions of the local cityscape winning a raft of admirers.

“Gdynia is my family home,” he tells TFN, “so I really care about promoting its heritage – it’s easy to find inspiration surrounded by such unusual and wonderful modernist architecture, and it’s great to be able to showcase it; on a global scale, I think that Gdynia’s architecture is totally unique.” 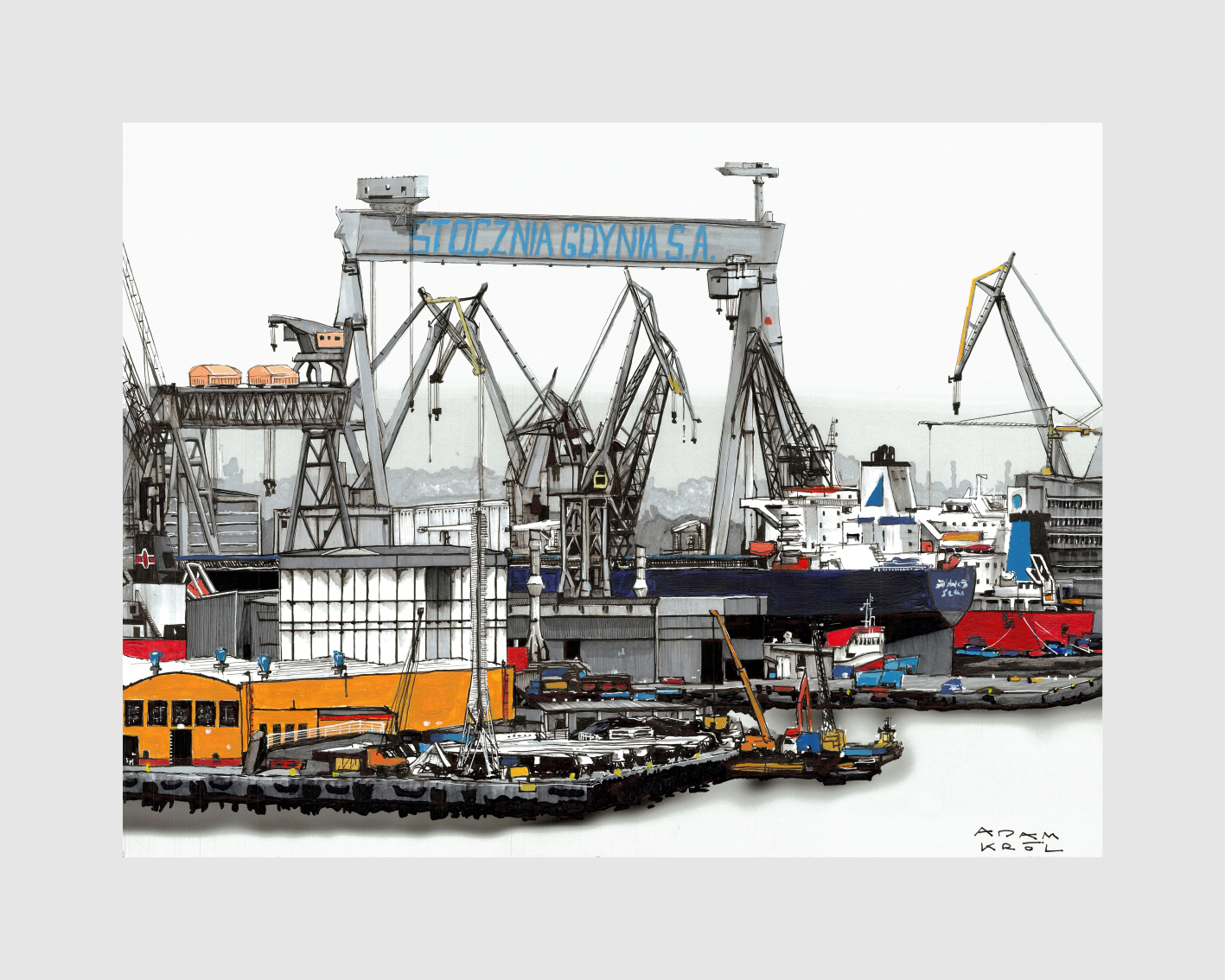 Artists Adam Król’s port life is nothing if not completely compelling. He says: “The port is a symbolic place for both myself and other Gdynia families.”Adam Król

In his appraisal of Gdynia, Rutka is not alone. Principally born in 1919 to act as “Poland’s gate unto the world”, the newly built port of Gdynia came to symbolize the aspirations of the independent Polish state and was created to act as an economic rival and counter-weight to the nearby Free City of Danzig.

In urban terms, it became an overnight success story with tens of thousands of settlers attracted to the riches promised by the fledgling city; their dreams were reflected in the works of the upcoming architects involved in the construction of the town. 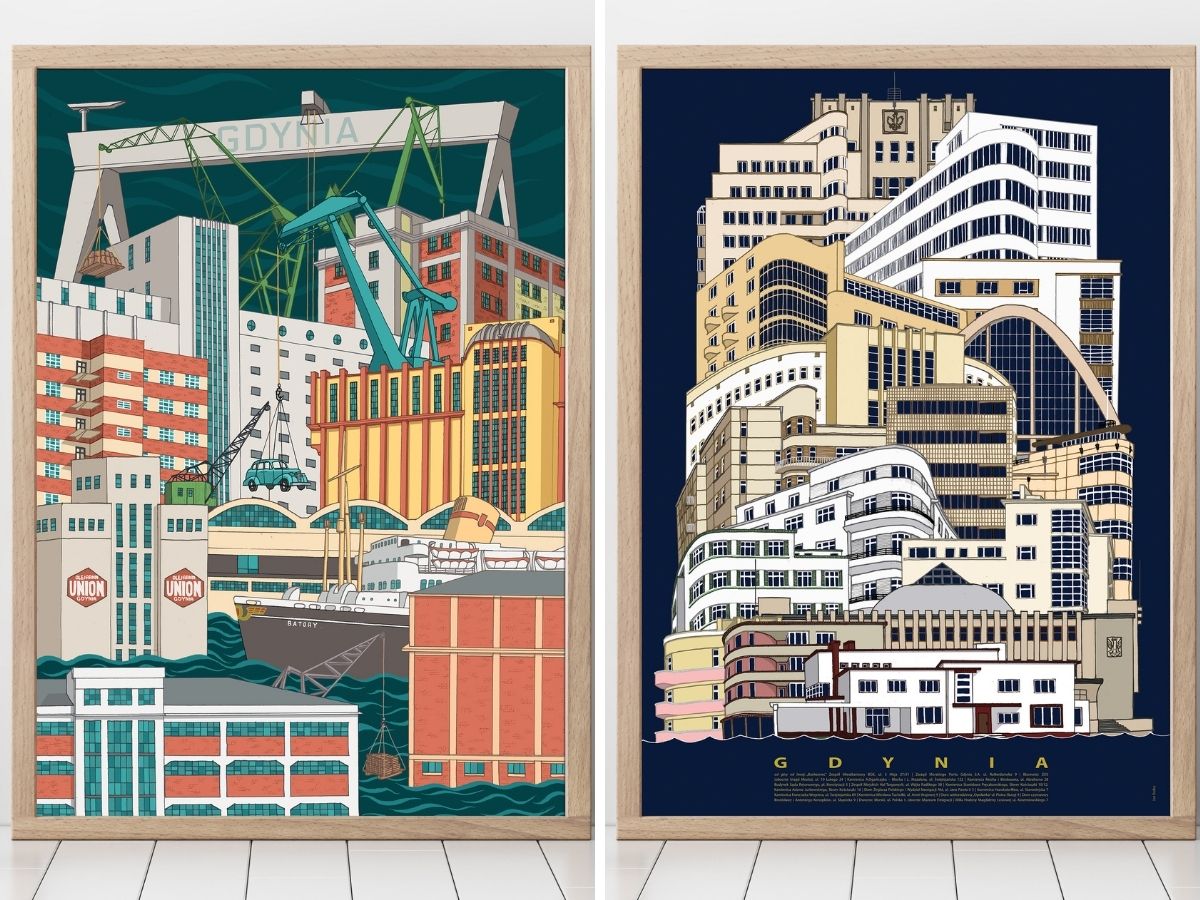 Subjected in recent years to a thorough restoration, the city has bloomed anew alongside a burgeoning cultural life as Jan Rutka’s posters depict.Jan Rutka

Favouring the latest architectural philosophies of the day, what emerged from their blueprints was a city whose aesthetic styling placed an emphasis on light and air – supremely functional, the bold simplicity that their solutions offered came as a breath of fresh air given previous European urban trends that favoured gauche excess.

Subjected in recent years to a thorough restoration, the city has bloomed anew alongside a burgeoning cultural life.

In this respect, illustrator, designer and architect Zuza Gadomska has done more than most to bring this vibrancy to the fore via her Gdynia In Colour series. 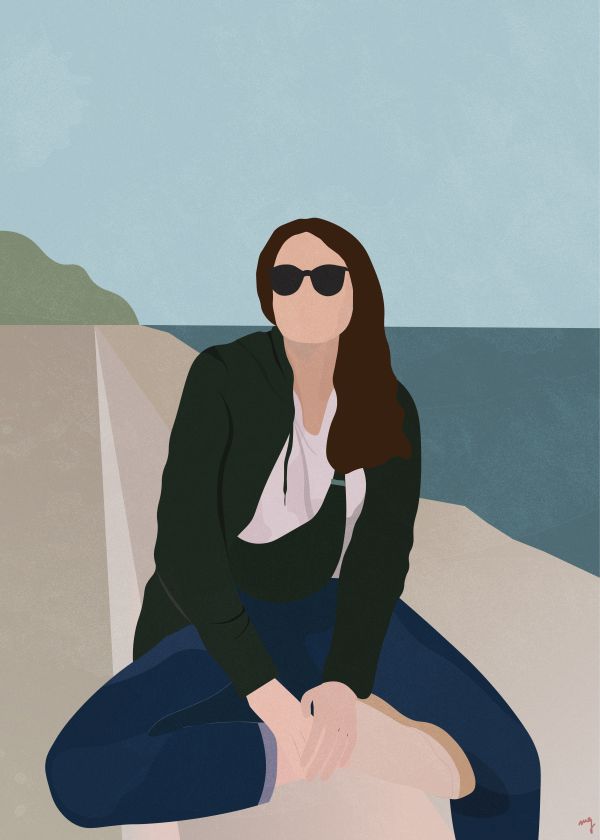 Magdalena Dopke’s woman wearing a green sweatshirt and jeans sitting on the breakwater on the Seaside Boulevard in Gdynia was inspired by a friend who works for the city and is directly involved in its development. Magdalena said: “It is one of the works from the entire series in which the characters drawn by me ‘don’t have faces’. The idea came from the desire to convey the atmosphere from individual photos and to show the characters and special features of the heroes of the photos, without revealing directly who they are.Magdalena Dopke

“In my architectural-related works I focus on the heritage of modernism,” she tells TFN. “I wanted to force people to start to notice it and to demonstrate how versatile it is – that’s why I sometimes play around with colours, even though in reality these buildings are often white and very plain and clear. I think a lot of people don’t realise that they are surrounded by such amazing architecture so to make them notice it is a great win.”

Though a non-native of the Tri-City, Gadomska has been quick to fall under its spell.

“I’m just amazed by Gdynia's history and its implementation of pure modernist ideas,” she says. “I've been living in Tri-City for over ten years now and Gdynia has always been my favourite – often I’ve wondered why, and I think it definitely has something to do with the scale of the city and its buildings, not to mention the way it combines city life with sea-related leisure. Should I stay in the Tri-City for good, I know it’ll be in Gdynia.” 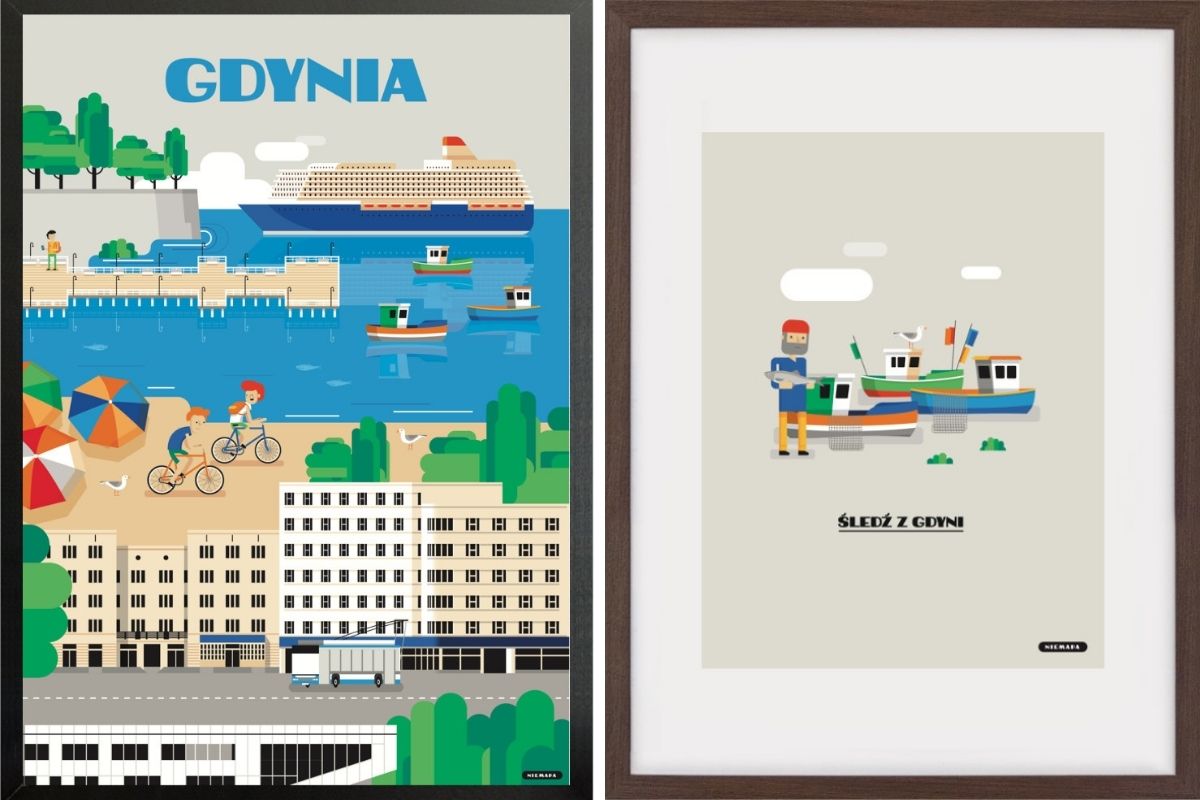 nieMAPA decided to represent the city in a different fashion, with jovial almost Lego-like depictions.nieMAPA

Departing from the clean lines and colour surfaces used by Gadomska in her Gdynia series, others have chosen to represent the city in a different fashion: from the jovial almost Lego-like depictions of nieMAPA to the quirky style of Joanna Klimaszewska, co-founder of Gliniana Kura, a souvenir brand that envisions Polish city’s through a comic book lens.

And there is Adam Król; merging computer tech with ink and acrylic paint, his take on port life is nothing if not completely compelling. 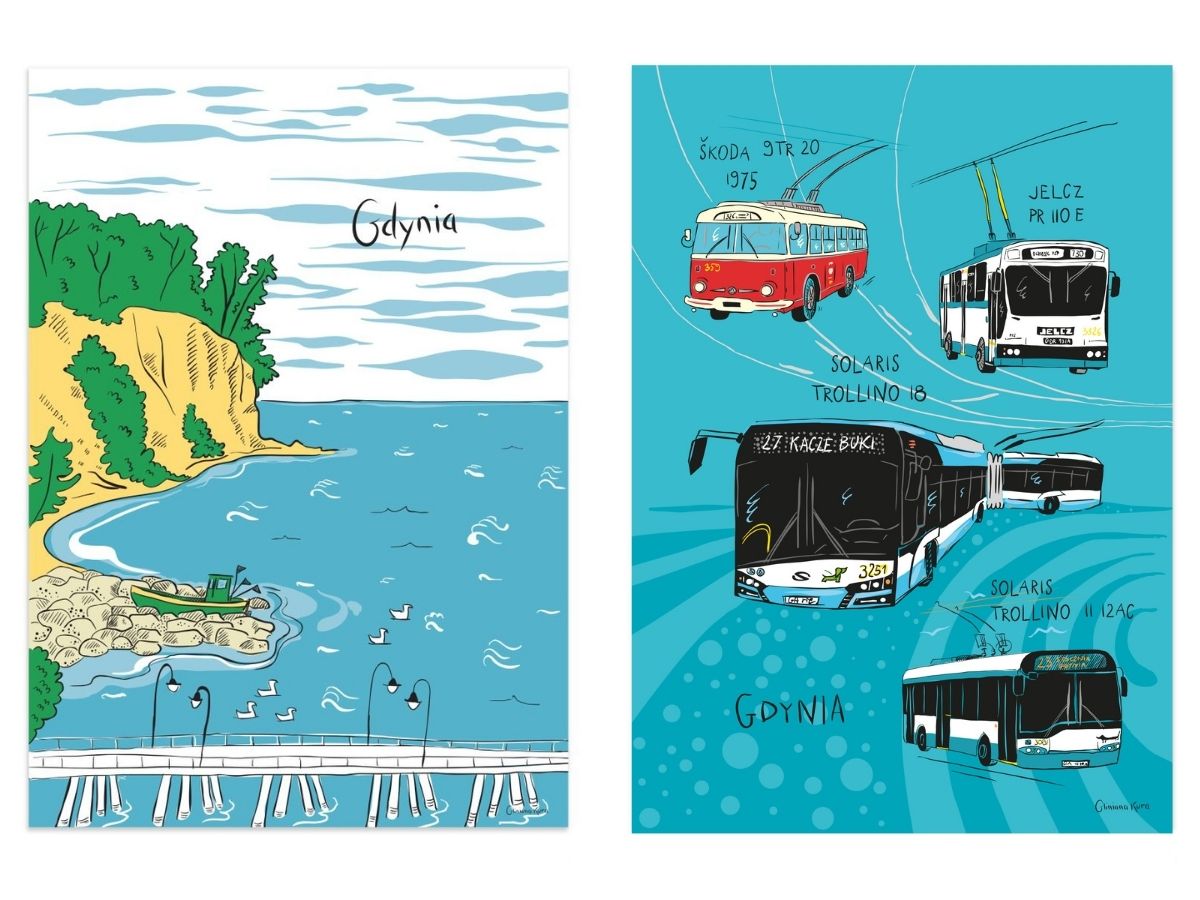 “The port is a symbolic place for both myself and other Gdynia families,” he says. “My grandfather and father worked there, and while I never have, all three of us associate our professional paths with the place – every day I pass it to work, and it will always be in my memories.”

Mirroring the city’s drive and dynamic in their own individual way, these works – and many others not mentioned – have captured the zeitgeist to depict a town on the ascent. In this, the organic relationship between art and architecture has played a vital role and fast become a calling card for a city once overlooked by the casual outsider.