Gdańsk’s Great Synagogue which was destroyed by Hitler’s invading forces in 1939 has been painstakingly recreated as a bronze model.

The model, on a 1:70 scale, was designed by sculptor Michał Wysocki and urbanist Michał A. Witkowski.

The mayor of Gdańsk, Paweł Adamowski and the head of the city’s Jewish community, Michał Samet unveiled the model earlier this week during an accompanying academic conference on the building’s history.

Erected in a neo-Renaissance style in 1885-1887, the Jewish prayer house was one of the city’s most imposing landmarks with a tower soaring 54 metres (177 feet) into the sky.

In October 1937, the local Nazi party provoked a large-scale pogrom that led half the Jewish population to leave and in November the following year, the Kristallnacht, a series of coordinated pogroms and synagogue burnings across Germany, found keen followers among the people of Danzig. On 12-14 November, mass arrests of Jews accompanied beatings and destruction of Jewish property while stormtroopers destroyed several places of worship. 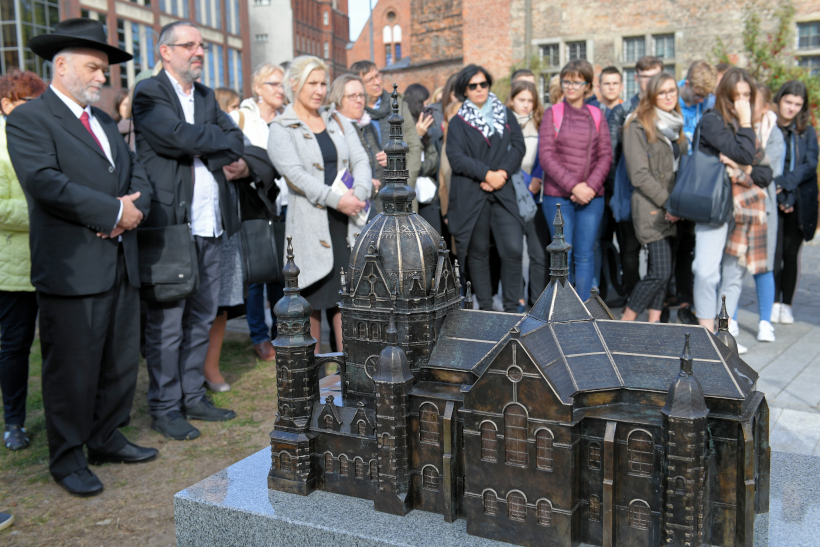 The mayor of Gdańsk, and the head of the city’s Jewish community unveiled the model earlier this week during an accompanying academic conference on the building’s history.Adam Warżawa/PAP

The Great Synagogue itself escaped this fate thanks to Jewish veterans of the German war effort in 1914-1918, who mounted a guard around it. But with Danzig authorities tightening racialist legislation and Jews fleeing across the border to Poland – 90% left in the years between the first pogrom and WW2 – the community decided to sell the building to the municipal authorities.

To encourage emigration, the Nazi authorities let the Jews take the movables with them which allowed for the preservation of the accumulated treasures to this day: the archives of Gdańsk’s Jewish community are in Jerusalem, its religious art collection in New York City, library in Vilnius, organs in Kraków and candle-holders in Warsaw.

The last Shabbat service was held on 15 April 1939 before the building was handed over to the authorities and fenced off. The Germans painted, “Come, lovely May and free us now of the Jews” in big Gothic letters on the fence before setting pickaxes to the synagogue on 2 May 1939.

When the first shots of WW2 were fired in the port of Gdańsk, there were little more than 1,000 Jews in the city.

Today, the Jewish population is estimated at 200 with only one, Jakub Szadaj, claiming descent from an erstwhile citizen of Freistadt Danzig. His father, Moises stood guard around the Great Synagogue during the pogroms of November 1938.