The Epstein family has always lived in the shadow of the Holocaust. Holy days and Friday night dinners in Toronto were dominated by talk of the Germans, Poland, Israel and what happened to patriarch Philip Epstein, who had lost everything during the Nazi purge of Europe. The point was to never forget.

So when it came to grandson Nathan’s bar mitzvah, the Epstein family decided that they needed to do something to honour the family’s very difficult past: Nathan would have his bar mitzvah in the Polish city of Łódź, in the same synagogue his grandfather had had his own, 72 years earlier.

“My brother Mark returned to Poland with my father seven years ago and was very impacted by his visit,” Risa Epstein, Philip's daughter and Nathan’s aunt, told TFN.

“He wanted to reclaim that memory and replace it with a memory of happiness and triumph, so he decided to take his son Nathan, with his grandfather, to have Nathan's bar mitzvah.”

For Philip Epstein, returning to Łódź was never going to be easy. The 83-year-old had been born into what he describes as “a loving, caring family” before WWII turned his life upside down.

He and his family were forced to flee the Nazi war machine, hiding in a forest, then in a lice-ridden bunker for 16 months. One day his father left to find food and never came back.

After the war, in 1946, Philip, 11, was called to the bimah in order to take on the responsibilities of an adult man. The coming-of-age rite was normally reserved for boys of 13, but the young Epstein was now the head of the family, taking on the role of the patriarch in place of his father.

Of going through the rites without his father, Philip says “it was the saddest day of my life”.

Organising Nathan’s bar mitzvah in the same synagogue was not easy, as preparations took over a year and involved much wrangling. Despite having once been the second-largest Jewish centre in the world, Łódź today has no Jewish community and the Reicher synagogue had been closed for 50 years. 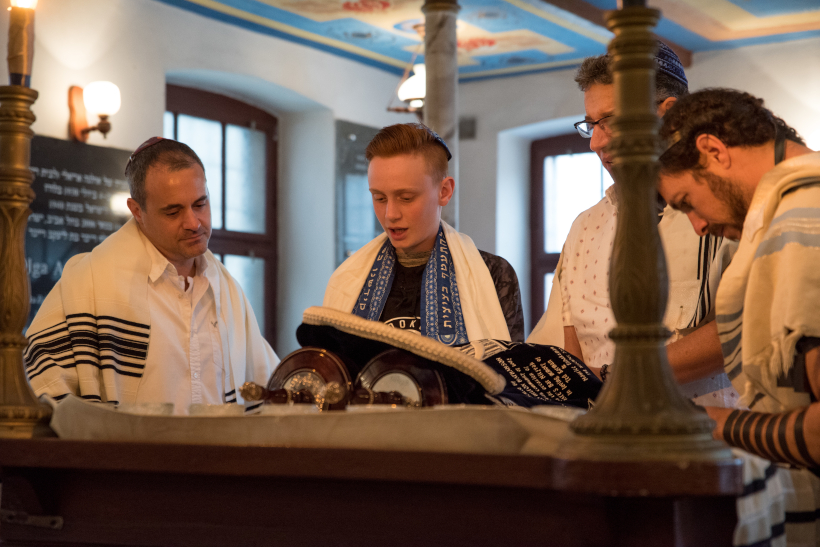 Nathan Epstein stands in the same place his grandfather did 72 years-ago as the synagogue in Łódź sees its first bar mitzvah in over 50 years.The Epstein family

But finally, in July 2018, the doors opened and the house of prayer saw its first bar mitzvah in 50 years. Nathan was now a man.

Along with the Epstein family were 100 representatives of Jewish youth. In a speech he delivered for his grandson’s special day, Philip addressed the young congregation.

“I do remember that the last ghetto we were in was the Rovno Ghetto. There was a small resistance force made up of young people around your ages. Look at each other and think if you kids could do what those kids did,” he said.

"I survived and I was granted the years to be with my beloved wife, children and grandchildren and share in their many simchas.  But what I can tell you is that when I walked out of the forest I left my father who was so dear to me and my childhood."

Nathan, also took the pedestal to make a speech of his own. Reflecting on the responsibilities that a bar mitzvah bestowed on a young Jewish man, he spoke of honouring his grandfather's past.

“I know the importance of this story, and 20 years from now I will be sitting at the Friday night dinner table telling these stories to my own children, and we will come here too."