A Polish woman who saved the lives of two young Jewish women during the Holocaust after they had survived three rounds of extermination by German and Ukrainian killing squads in the Włodzimierz Wołyński ghetto has been recognised as Righteous Among the Nations by Yad Vashem.

Janina Zawadzka offered life-saving shelter to Mania Tisch and her cousin Popa in a stable on her property after the two women had escaped the final round-up and murder of Jews in the town which is now called Volodymyr Volynski in western Ukraine.

The recognition was confirmed at the end of last year by Yad Vashem after the efforts of Adena Astrowsky, the granddaughter of Mania Tisch (later Mania Lichtenstein). 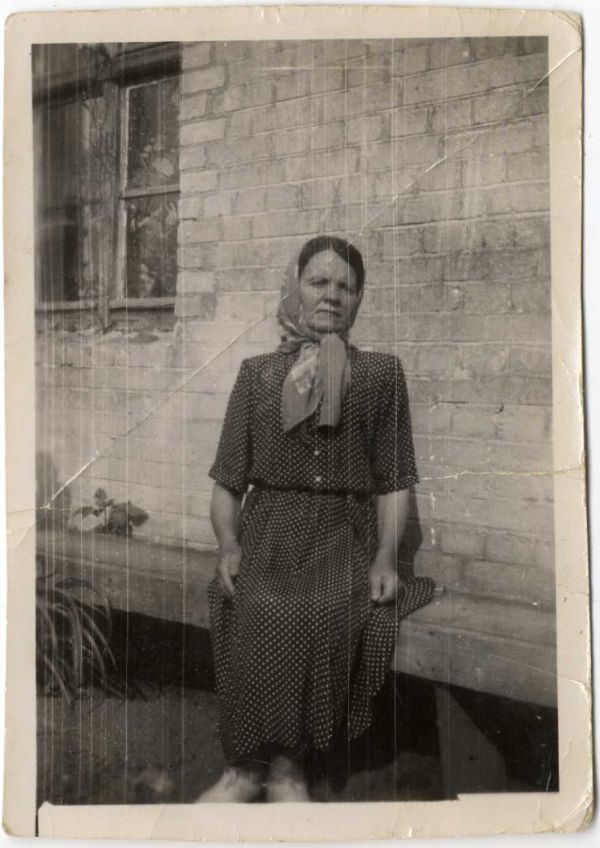 Janina Zawadzka (pictured) exhibited extraordinary bravery at the risk of her own life by hiding Mania Tisch and her cousin Popa from certain death.Adena Astrowsky

In a letter dated 30 November 2020, Yad Vashem said: “We are pleased to announce that the Commission for Designation of the Righteous has decided to award the title of “Righteous Among the Nations” to Janina Zawadzka, for help rendered to Jewish persons during the period of the Holocaust at the risk of her life.”

Astrowsky, who lives in Arizona, recently published a book about her grandmother’s experiences, Living among the Dead: My Grandmother's Holocaust Survival Story of Love and Strength.

She told TFN: “At a time when most people lacked a moral compass, a few people, like Janina Zawadzka, exhibited extraordinary bravery at the risk of their own lives. Those like Janina were the Righteous Among the Nations.”

She added: “My grandmother said that she was an absolutely lovely woman with a heart of gold. She said that she really had a lot of pity for the Jews and would cry over what was being done to them.” 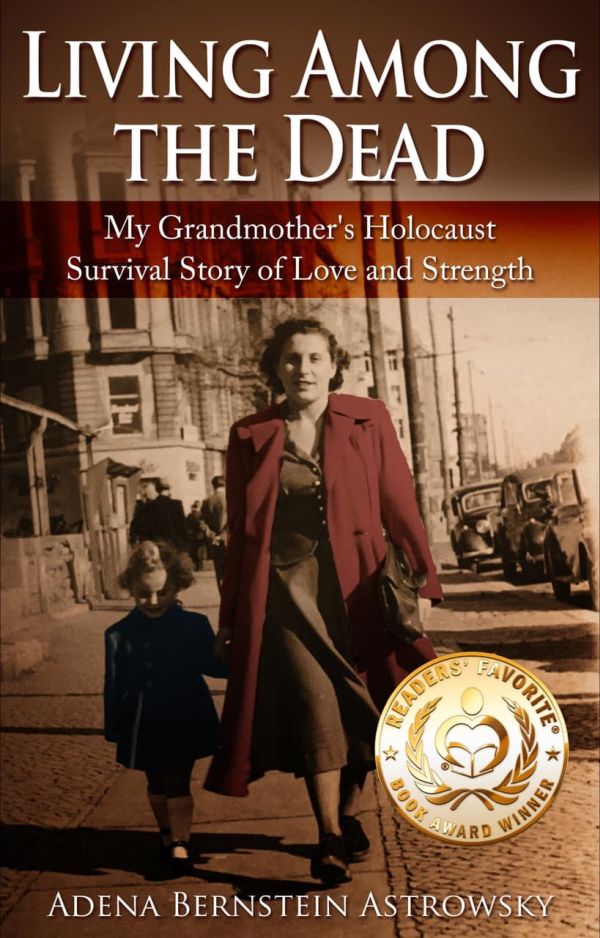 In her book Living Among the Dead: My Grandmother's Holocaust Survival Story of Love and Strength, author Adena Astrowsky tells how her grandmother Mania Tisch (pictured on the cover) survived the Holocaust because of Janina’s bravery.Adena Astrowsky

Before the war, around 26,000 Jews lived in Włodzimierz. After the Germans took back control of the town in 1941 after its invasion of the Soviet Union, they and their Ukrainian helpers murdered almost all of them in three stages.

The town’s ghetto was divided into two parts, the ‘living’ and the ‘dead’ ghettos. The first was for those whose labour the Germans needed temporarily, while those in the other they regarded as useless and of no value.

Mania Tisch, who was 17 years old when the war broke out, was placed in the ‘living’ ghetto, but its supposed safety did not last long.

On the night of September 1, 1942, the Germans began a three-day killing campaign in the ‘living’ ghetto. Contemporary sources say that over 15,000 Jews were shot near the village of Piatydnie. Mania maintained that the real figure was 19,000. 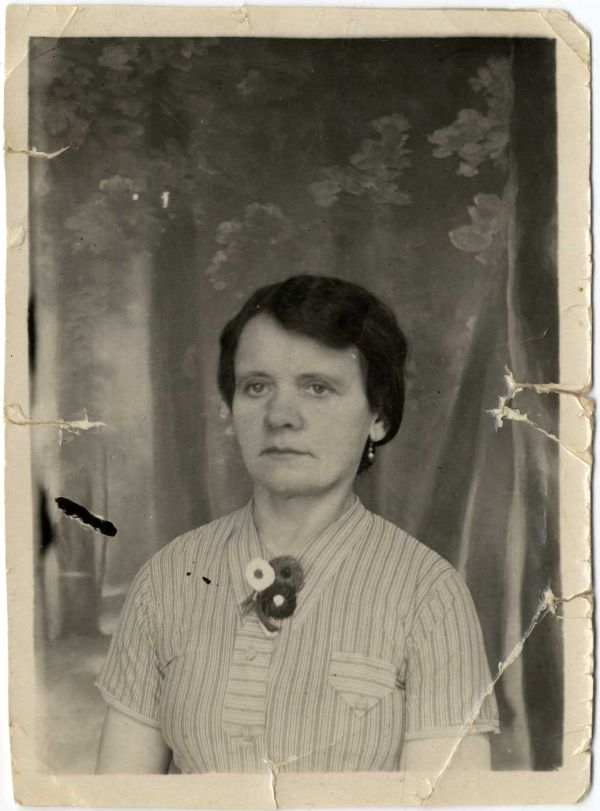 Mania later told Adena that Janina (pictured) was “an absolutely lovely woman with a heart of gold. She said that she really had a lot of pity for the Jews and would cry over what was being done to them.”Adena Astrowsky

The crimes were committed by the Sicherheitsdienst, German military police and the Ukrainian police.

Miraculously, Mania avoided this first clearance because she had not been allowed to return to the ‘living’ ghetto after arriving back late after working all day in a wheat field.

They next morning though, the Germans and Ukrainians came to the ‘dead’ ghetto to fill their quota of Jews they had been ordered to murder.

Mania hid in an attic for 15 days with other Jews as they listened to the killers tearing apart all the houses around them. 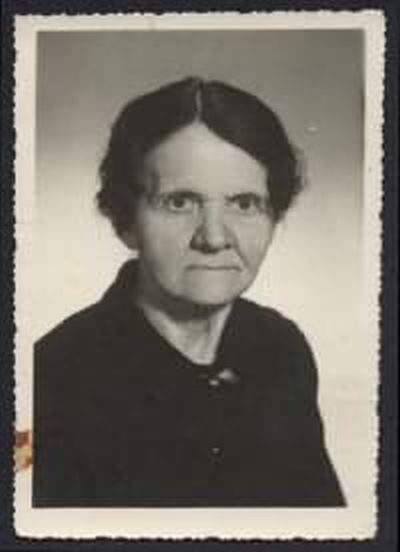 Janina (pictured) let Mania and Popa hide under the covers of a little bed in a small room until her neighbors became suspicious and questioned her about whether or not she was hiding any Jews.Adena Astrowsky

Eventually, the Germans fulfilled their quota, they called off the search and reorganised the remaining Jews into a truncated ghetto, still divided into ‘living’ and ‘dead’ sections.

Mania’s mother, father, grandmother and her two sisters were among the Jews who had been murdered.

Fate also intervened to save Mania from the second ghetto clearance.

Two months later, while at work, she cut her eyebrow on a window frame resulting in a significant loss of blood. The Germans permitted her to leave work and go back home to the ghetto to attend to the injury. 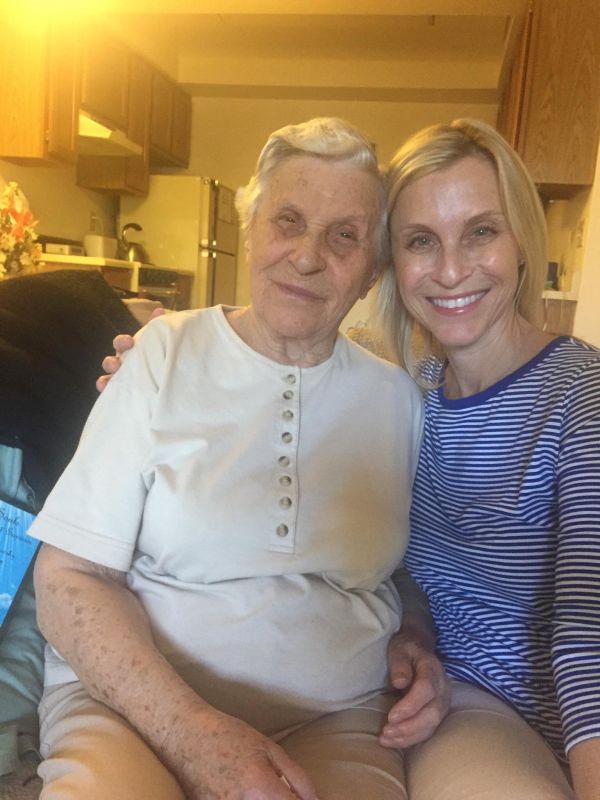 Mania Tisch (pictured left with her granddaughter Adena) was 17 years old when the war broke out, and was placed in the ‘living’ ghetto.Adena Astrowsky

By chance she visited a couple she knew in the ‘living’ ghetto who had a little soup to share. She stayed the night there.

In one morning, the 8,000 Jews in the ‘dead ’ ghetto were rounded up and exterminated.

After the second clearance, the remaining 1000 Jews in the living ghetto were moved to even smaller ghettos.

Mania spent the next year and one month working in a knitting workshop believing that her own death was just around the corner. 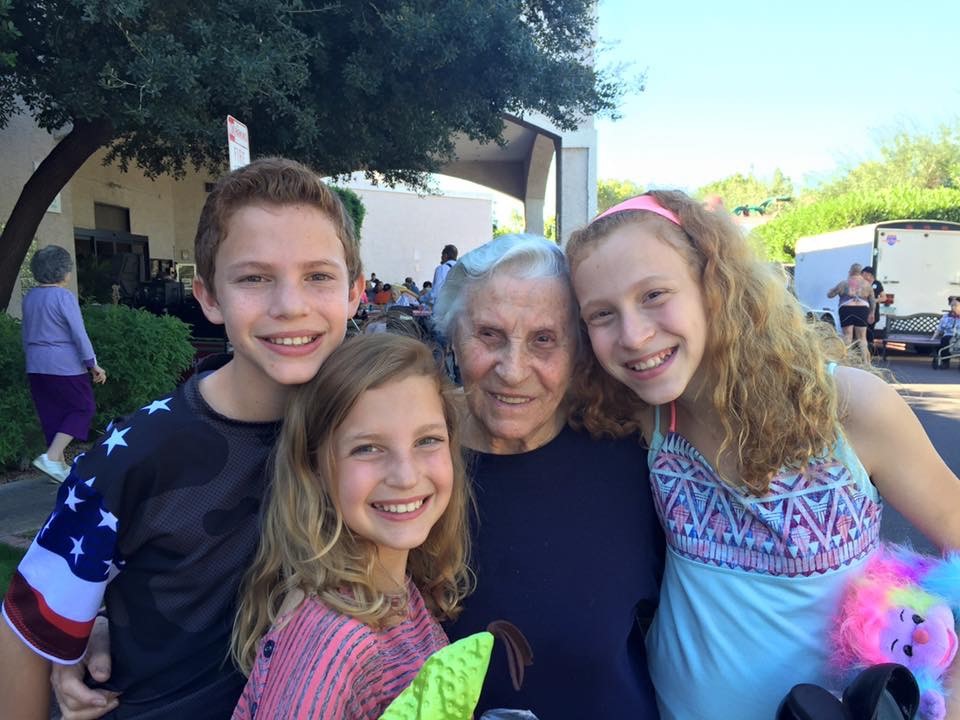 Thanks to Janina’s bravery, Mania (pictured with her Grandchildren) survived the war. She died in 2017.Adena Astrowsky

When the Germans finally came to kill them, Mania and several others, including her cousin Popa, found a little deserted shed where they stood motionless all day long without food or water, waiting until they would be found by the soldiers.

Eventually, they agreed they had to leave the shed, even at the risk of being killed.

Mania did not know where to run to, but Popa knew a Polish woman named Janina Zawadzka who might be willing to help them. 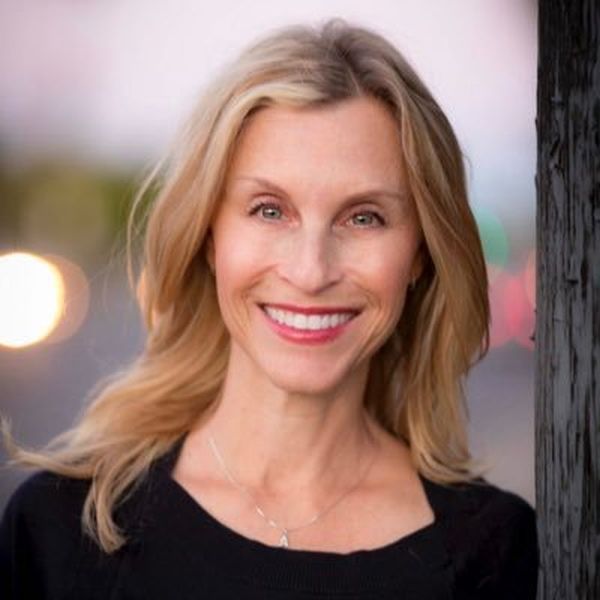 Following her Grandmother’s death, Adena decided to tell her story of survival.Adena Astrowsky

In her book, Astrowky wrote: “Prior to the war, this woman had received some valuables from Popa’s parents in exchange for a hiding place should the need ever arise. She lived on the outskirts of the city.

“At approximately 3 a.m. they ran to her house and knocked on her door . She was a good woman with a big heart . She knew what was happening to the Jews and was very distraught about it.

“Janina let them come in and hide under the covers of a little bed in a small room since there was no actual hiding place for them. Her neighbors became suspicious when they noticed she was constantly locking her front door, and they questioned her about whether or not she was hiding any Jews." 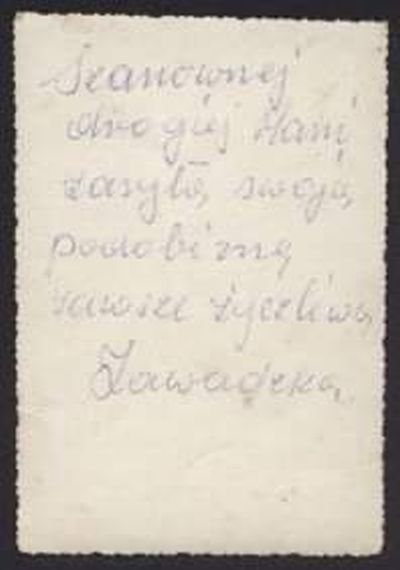 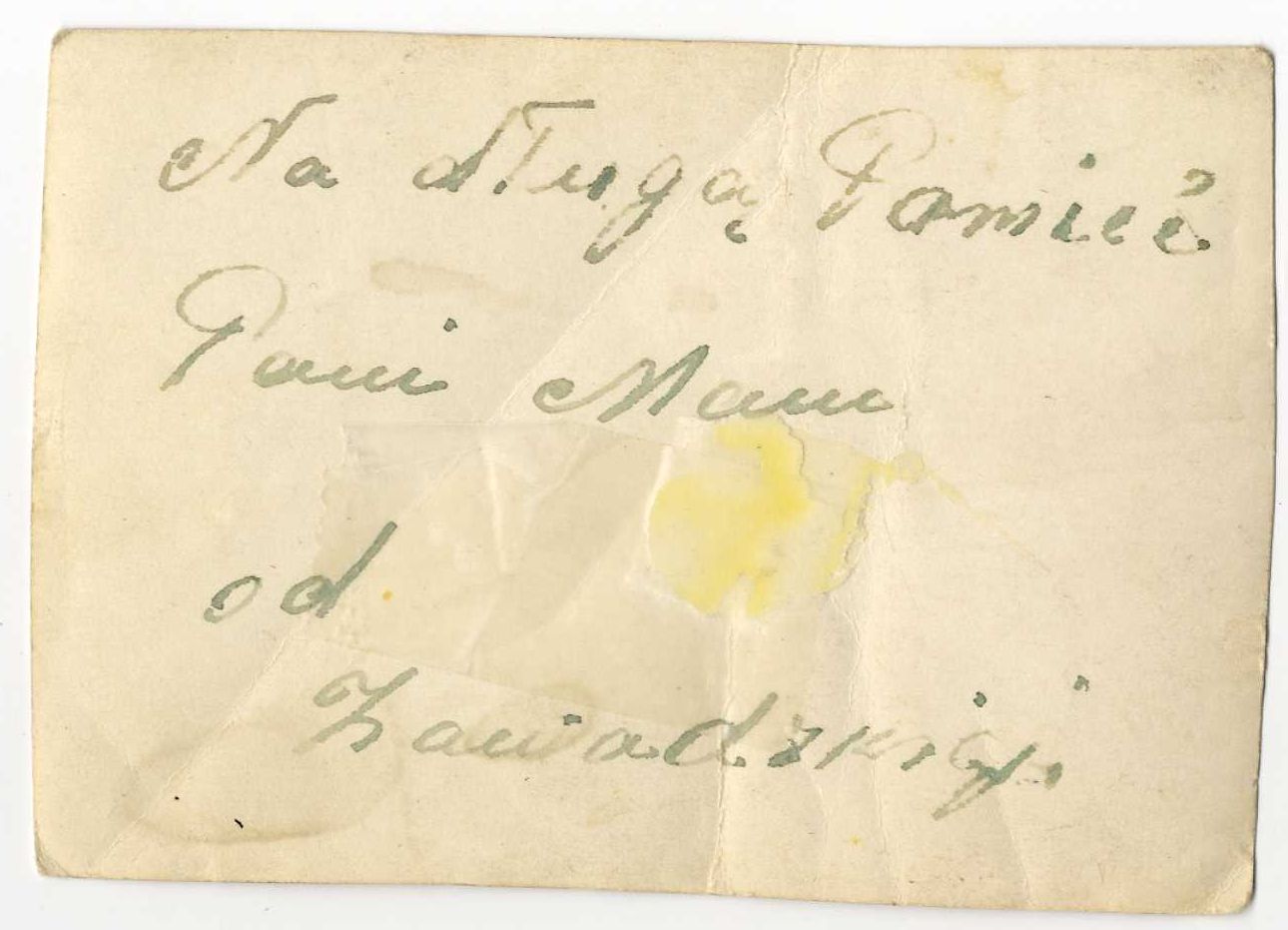 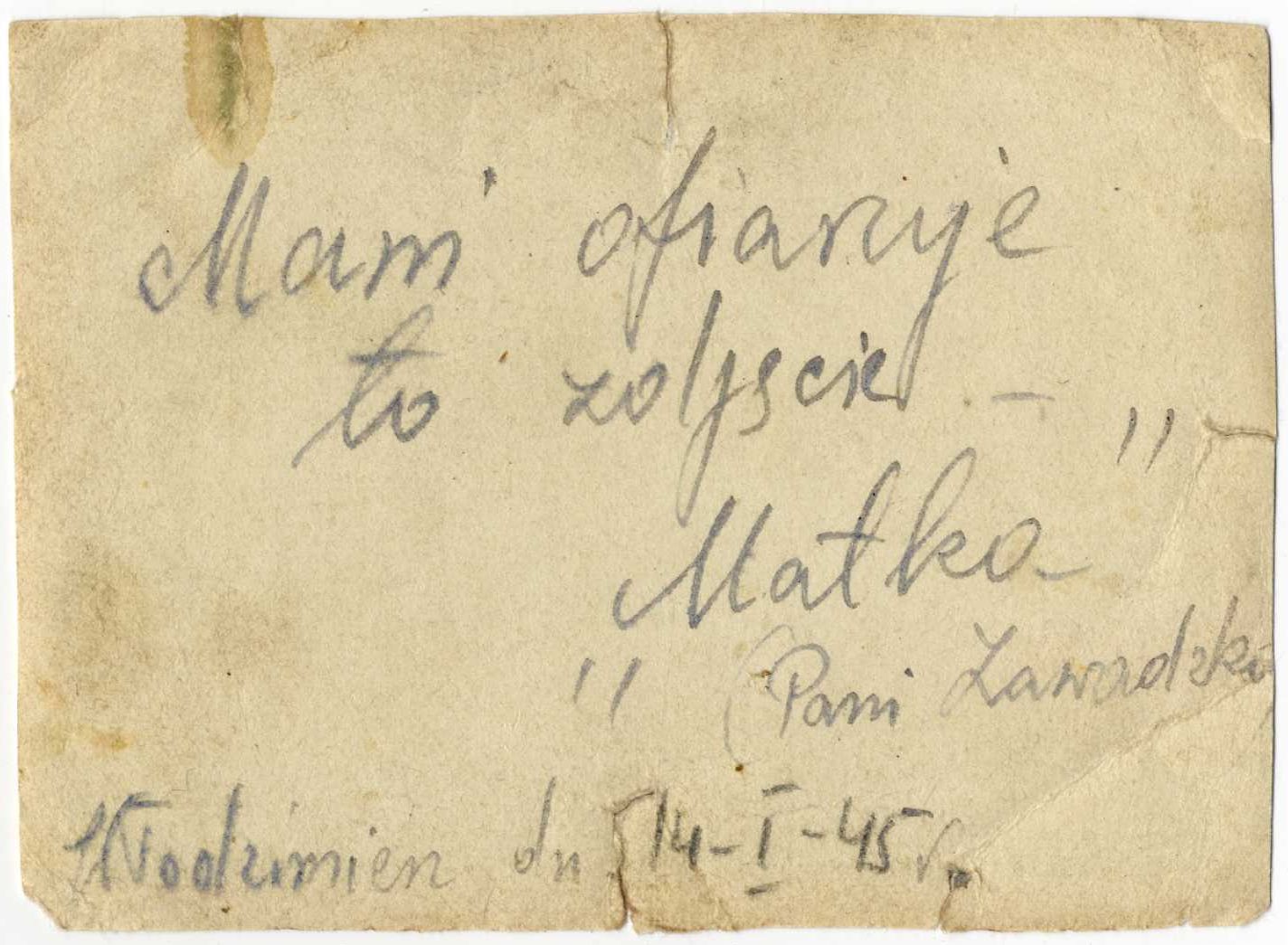 Through memories of what her grandmother had told herand from letters Mania had kept with Janina, Adena was able to piece together the incredible taleAdena Astrowsky

Mania and Popa moved to her outdoor stables and hid there with the horses. They stayed there for two months.

Eventually, the risk was too great and they had to move. Janina came up with a plan to have a peasant she knew take them to the woods by his horse and wagon.

Janina’s plan was for the peasant to give a bottle of vodka to the German guard so that he would let the wagon pass. It worked and Mania and Popa were suddenly out of the immediate danger zone. 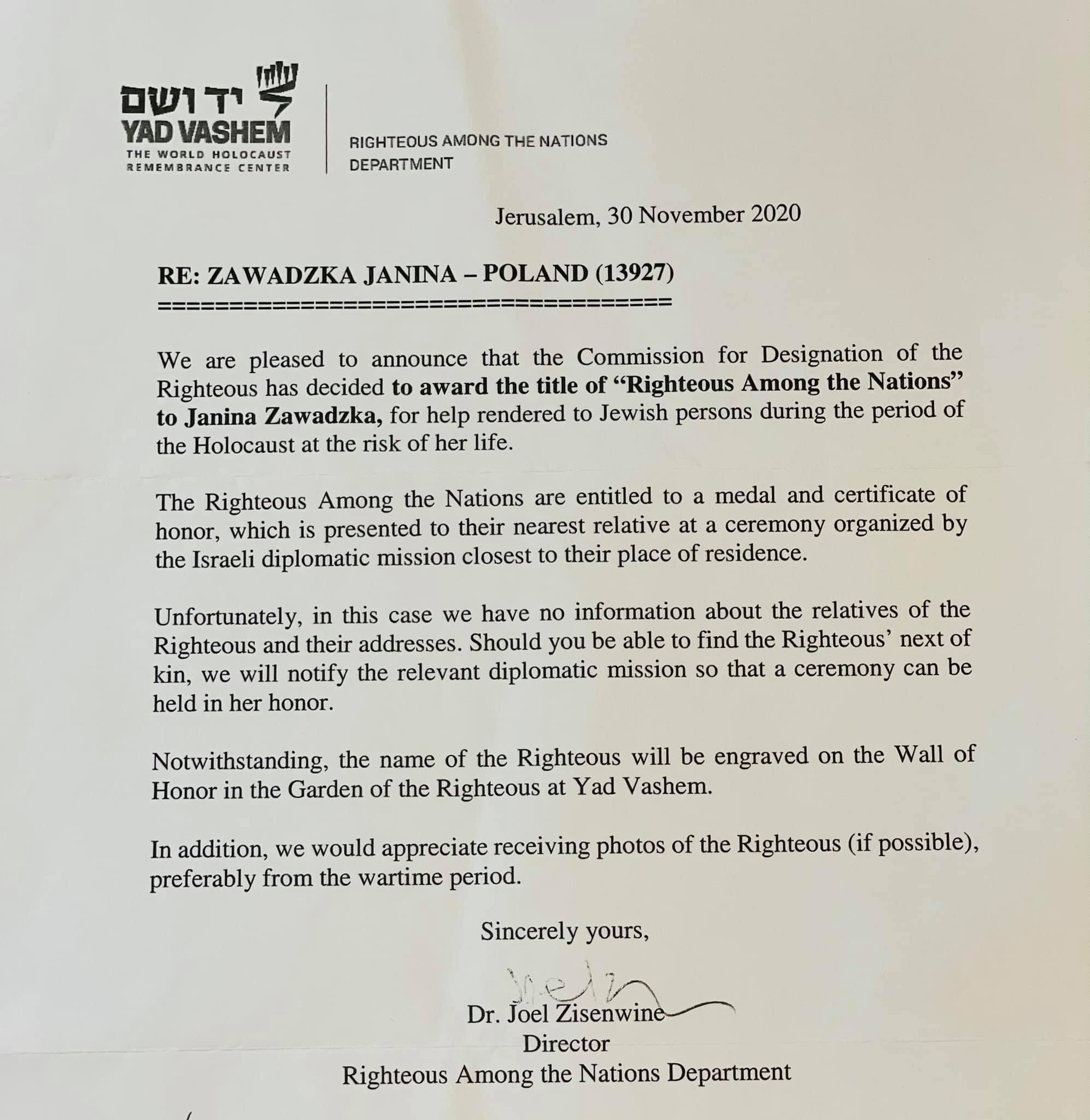 After Adena’s efforts to get Janina’s bravery recognised, in a letter dated 30 November 2020, Yad Vashem said: “We are pleased to announce that the Commission for Designation of the Righteous has decided to award the title of Righteous Among the Nations to Janina Zawadzka, for help rendered to Jewish persons during the period of the Holocaust at the risk of her life.”Adena Astrowsky

In the forest Mania and Popa met up with a group of young Jews who had escaped from ghettos earlier. Among them were the brothers Joseph and Moishe Lichtenstein. After the war, she would marry Joseph and move to Canada and then the United States.

Mania stayed in contact with Janina after the war by exchanging letters, but eventually the contact broke off. Neither Mania nor her granddaughter know what happened to Janina in the years after the war.

Mania Lichtenstein died in 2017 in the United States. 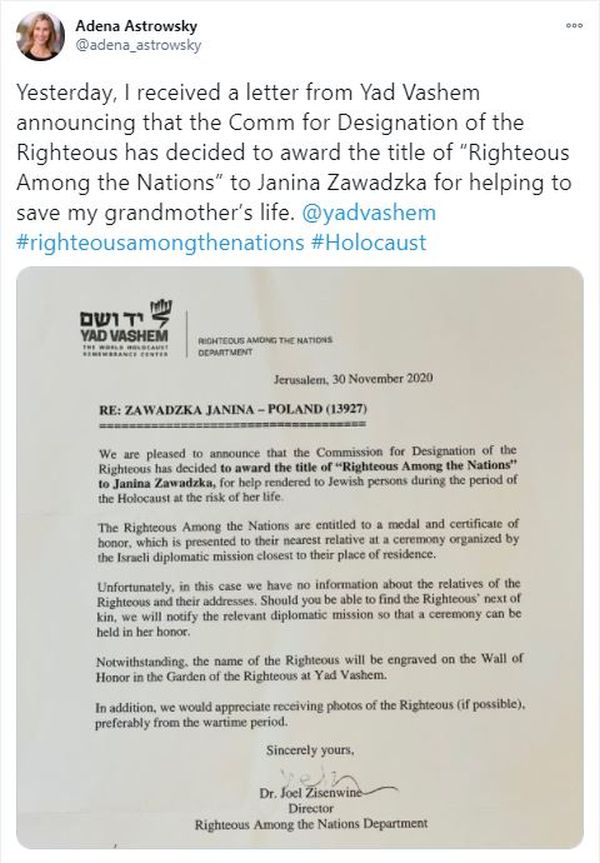 Delighted Adena posted on social media: “Yesterday, I received a letter from Yad Vashem announcing that the Comm for Designation of the Righteous has decided to award the title of “Righteous Among the Nations” to Janina Zawadzka for helping to save my grandmother’s life.Adena Astrowsky

Little more is known about Janina, and with no known next-of-kin it is unlikely that a ceremony can take place in Poland to bestow the honour. Despite this, Janina’s name will be etched onto the wall of the Righteous Among the Nations in Jerusalem.

Righteous Among the Nations is a list used by Israel to honour non-Jews who put their own lives in peril during the Holocaust to save Jews from extermination by the Germans.

She will now join over 6,600 other Poles who have received the recognition. This is over a quarter of the total number of awards, and more than in any other country.