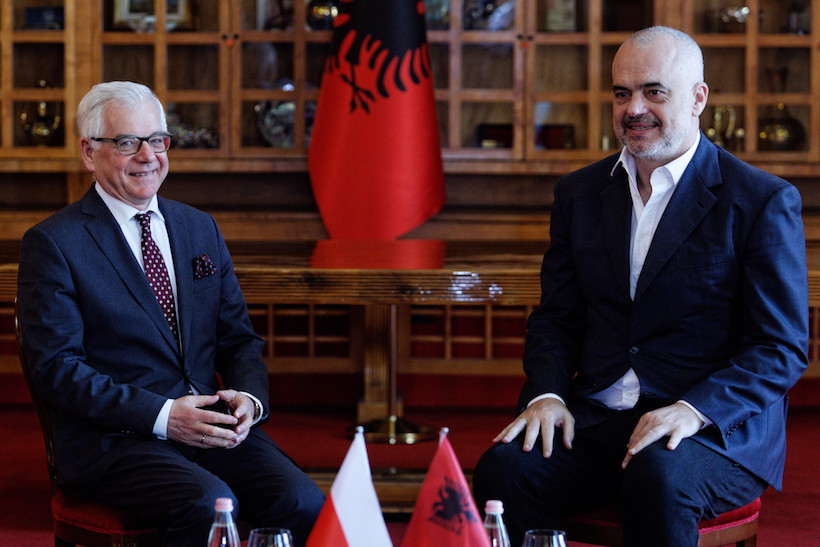 "We want to demonstrate our support for Albania's European aspirations," Czaputowicz told journalists during his flight to Tirana. He pointed out that the visit takes place ten days before the EU-Western Balkans summit, during which further decisions will be taken determining the Union's policy towards this region. He assessed that "there is some hope that in a few years, in mid-2020's, the first countries from the Western Balkans could be accepted (to the EU)."

The Polish official pointed out that Albania, which is a member of NATO, is a quite advanced state in its region when it comes to implementing Western standards.

Czaputowicz also said that Poland, which is perceived as a country traditionally focused on the eastern dimension of the EU, wants to show "solidarity with the countries of this part of Europe (...), hoping that they will show solidarity with us when we propose a policy towards Eastern Europe".

According to an earlier statement of Poland's Foreign Ministry, Czaputowicz's visit "confirms the will of Poland to develop very good Polish-Albanian relations, in the areas of both the economy and defence, as well as culture and education".

"This is also to show Poland's recognition of Albania's achievements in the EU accession negotiations, which were also acknowledged by the European Commission in the April enlargement report," the statement read. "This document includes an unconditional recommendation for member states to open accession negotiations with Albania, which Poland strongly supports," the Foreign Ministry stressed.

During the visit, the foreign ministers of Poland and Albania will jointly inaugurate the "Tirana Conference", during which Poland will share its experiences from the pre-accession period. "We hope that this will contribute to strengthening the administrative capacity of the Albanian institutions and their effectiveness in adopting EU standards," Poland's foreign ministry statement read.

Minister Czaputowicz is to give a lecture at the Albanian Institute of International Studies on the prospects of Poland's and the European Union's policy towards the Western Balkan region, as well as on a vision of the EU's future.

In late April, the European Commission proposed that member states start accession negotiations with Macedonia and Albania. As the EU diplomacy chief Federica Mogherini argued, these countries have achieved some progress in reforms.