Fenix from the ashes: in the distant Faroe Islands, a Polish woman re-builds her life

There are no tourists on the Faroe Islands in December. My car was the only one to leave a huge ferry in Torshavn – the capital of the archipelago in the middle of the North Atlantic Ocean. There were neither customs officers nor border guards at the harbour. Because no one in their right mind would expect on a cold December day that anyone would be crazy enough to land here.

The small hotel where I'd booked the room was empty. I didn't meet a soul here all week. When I was leaving, according to the owner’s instructions sent to me by email, I calculated the money, put it on the table and closed the door with ... a door handle. No one locks their doors in the Faroe Islands.

It is a beautiful and wild archipelago with 45,000 people and twice as many sheep. But if sheep were everywhere, I hardly saw people. In small stores, outside the capital, I went in, shopped and tossed the appropriate amount into a can on the counter. Apparently, shop owners don’t have to keep an eye on their businesses. There are no thieves here and trust in another human being is a basic rule.

You can calm down here, relax. But after a few days, I noticed that I was starting to talk to myself. Hence, one Sunday morning I didn't react when a tall man said something to me in Polish. I only turned around when he repeated the question.

“A tourist from Poland?”

I nodded affirmatively. I was filling a car at a petrol station. A car with a Polish registration plate, so it would have been rather difficult to come to any other conclusion. But the guy in front of me was surprised.

“Why aren’t you staying at Sabina's house?"

I opened my mouth but didn't find the proper answer.

After five minutes of conversation with Tomek (he came to the Faroe Islands 20 years ago to play football and work in a small shipyard), I accepted an invitation to dinner and that's how I met Sabina Poulsen. 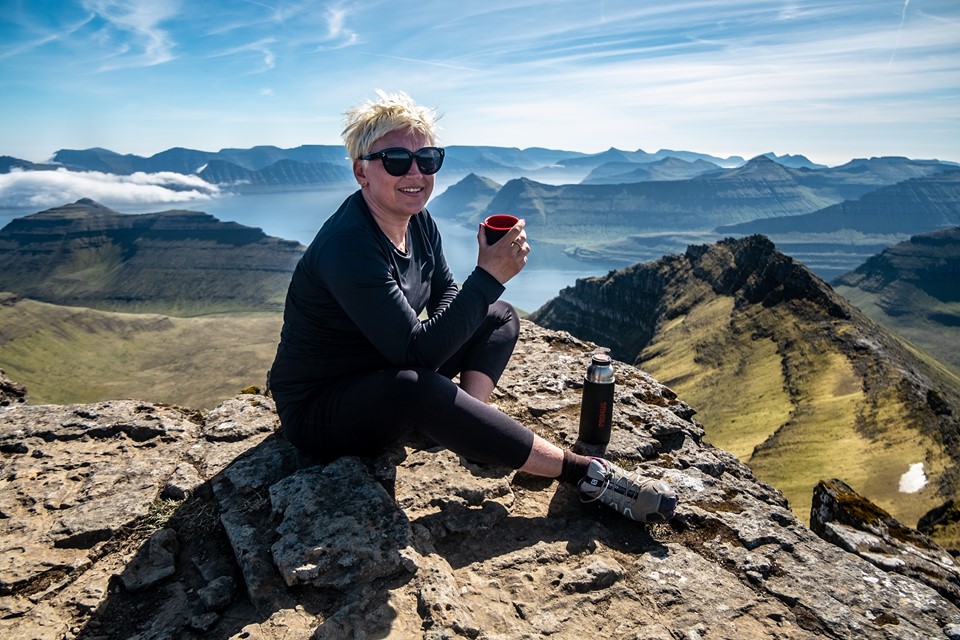 Originally from Wielkopolska Sabina has decide to make the islands her home.Sergiusz Pinkwart

I'm an immigrant myself, so I know how difficult a decision to leave the homeland is. But emigration to a small island in the cold North Atlantic is definitely crazy. So I expected a mad enthusiast of Scandinavian sagas, possibly a spiritual mystic, in love with the misty mountains in the middle of the ocean. But Sabina turned out to be a practical thirty-year-old from Wielkopolska. Home – as befits a good Polish host, shone with cleanliness and smelled of cake. Two small children were playing by the Christmas tree. Carols quietly flowed from the speakers.

“I just finished rebuilding my home after the fire,” said Sabina, bringing me down to earth. “First, my marriage broke up, and then fire broke out and everything I had went up in smoke. I stayed with two children. We only had the clothes we had on us. And in that moment I decided never to give up."

At dinner, I learned the story of Sabina. She came to the Faroe Islands with a man she loved. Happiness lasted for several years and then ended in divorce. But Sabina was not passively waiting for what the future would bring her. She had a pedagogical education. She didn’t know English, so she learned a difficult Faroese language and got a job in kindergarten. She also started to rent rooms to tourists. The fire symbolically closed one of the chapters of her life. Now she has decided that nothing would break or stop her. She will start a new life and in spite of everything, she will be happy.

A few months later I started to receive messages from her: “I walk in the mountains and even climb.” “'I'm the first Polish woman to reach the vertical rocks of Risin og Kellingin sticking out of the ocean!” “I started writing a blog owcze.com about the beauty and mysteries of the Faroe Islands.” “I built a second guest house.” “I'm writing a book! ‘Faroe Islands at first hand’. This will be my very intimate guide to the Faroe Islands.”

This last message is from December this year. I keep my fingers crossed for Sabina, but I know that nothing can stop the brave Polish woman when she decides to do something.

Around 132,000 Ukrainians find jobs in Poland