Considered one of the great masters of Polish post-war art, a trio of works authored by Wojciech Fangor are set to go under the hammer tomorrow (Thursday) at Warsaw’s DESA Unicum auction house in a process that could see previous records smashed.

Created during the height of his fame in the late 60s and early 70s, the three paintings offer a stunning glimpse into his genius. 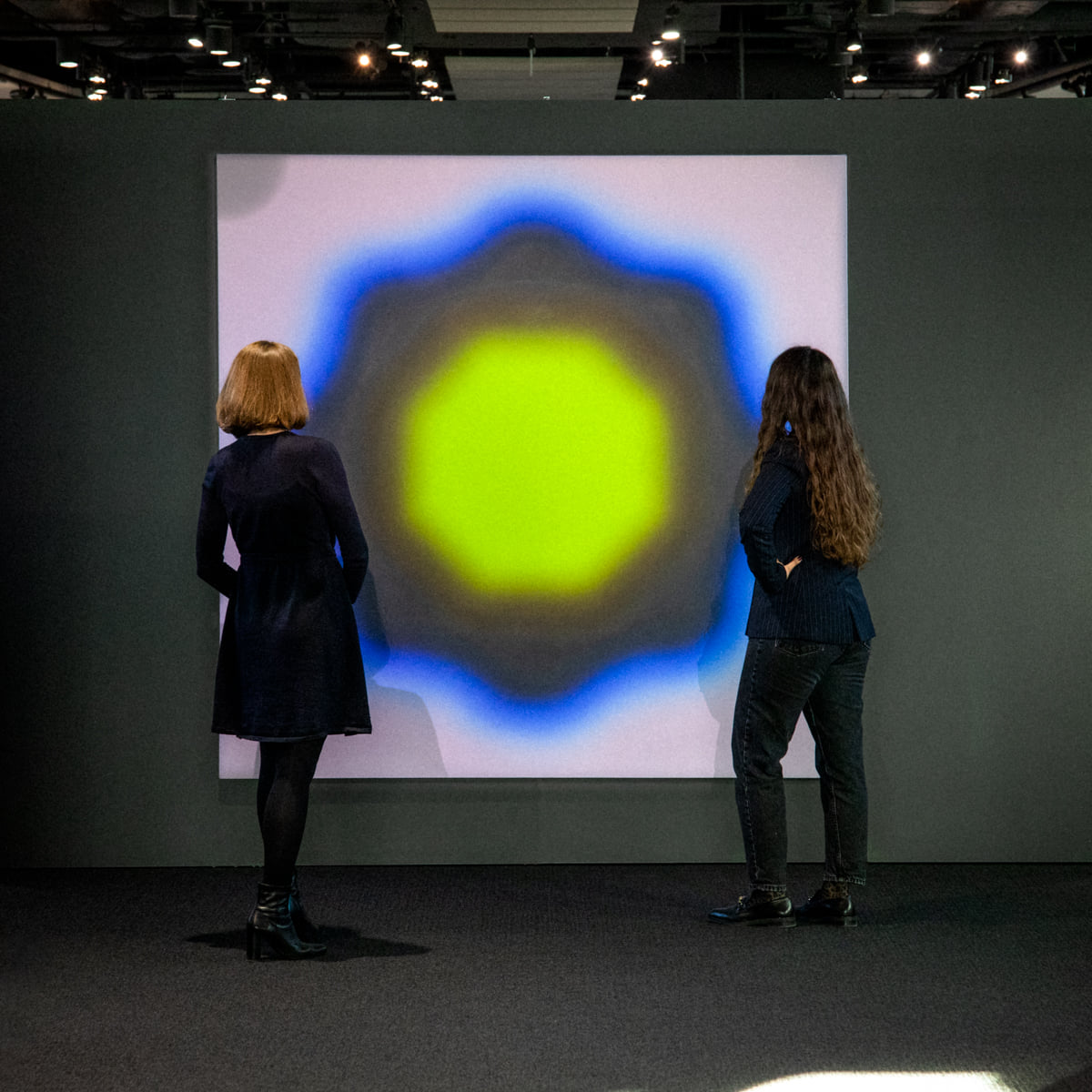 One of only three ‘rosettes’ ever painted by the artist, estimates for M 22 suggest that the price of this work could reach in the region of a record-breaking PLN 7 million.Desa Unicum

Causing a stir among art collectors, attention has naturally been drawn to a work titled M 22. One of only three ‘rosettes’ ever painted by the artist, estimates suggest that the price of this work could reach in the region of a record-breaking PLN 7 million.

“This is an extremely important auction for us,” DESA’s Anna Kowalska tells TFN. “The biggest piece, M 22, has a very high estimate and is the second Fangor of this shape and size that we’ve had – previously, in 2018, we sold a piece called M 39 for what was then a Polish record of PLN 4.72 million. This time around we’re hopeful of matching that price, and possibly even exceeding it – the sky’s the limit.” 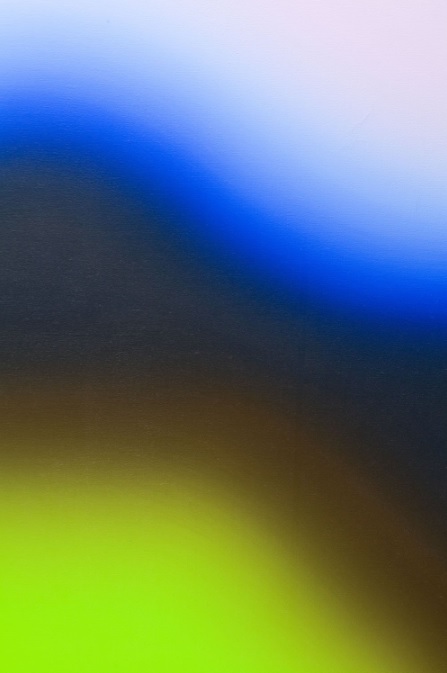 Demonstrating the full depth of his talent, Kowalska is emphatic in her appraisal of the work. “Not only is it a huge piece, two-metres by two-metres,” she says, “but it really is quite iconic in the way that it shows Fangor’s ability, technique and approach to art.

“Moreover, from an aesthetic perspective it’s almost electric in the way that it captivates – it practically vibrates in your eyes.” 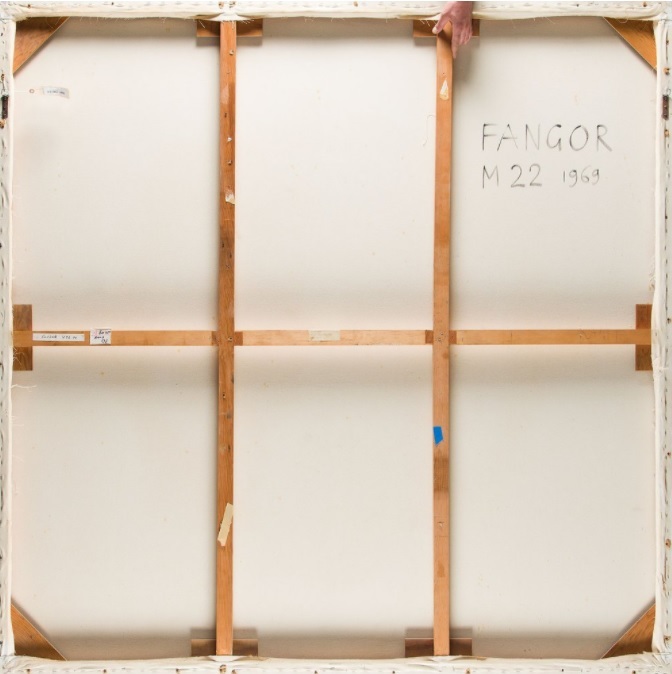 DESA is hoping that the signed artwork will beat previous records.Desa Unicum

Born in Warsaw in 1922, Fangor studied under Felicjan Kowarski and Tadeusz Pruszkowski; originally containing his post-war work within the parameters of the Socialist Realist style, the political and cultural thaw that followed Stalin’s death enabled him to develop his art further. Playing a key role in the birth of the Polish School of Poster, he later broke ground internationally by creating the art world’s first spatial installation in 1958.

Leaving Poland in 1961, first for Berlin, then for England and the United States, his cooperation with Manhattan’s Galerie Challete gained him instant recognition among critics and enthusiasts. 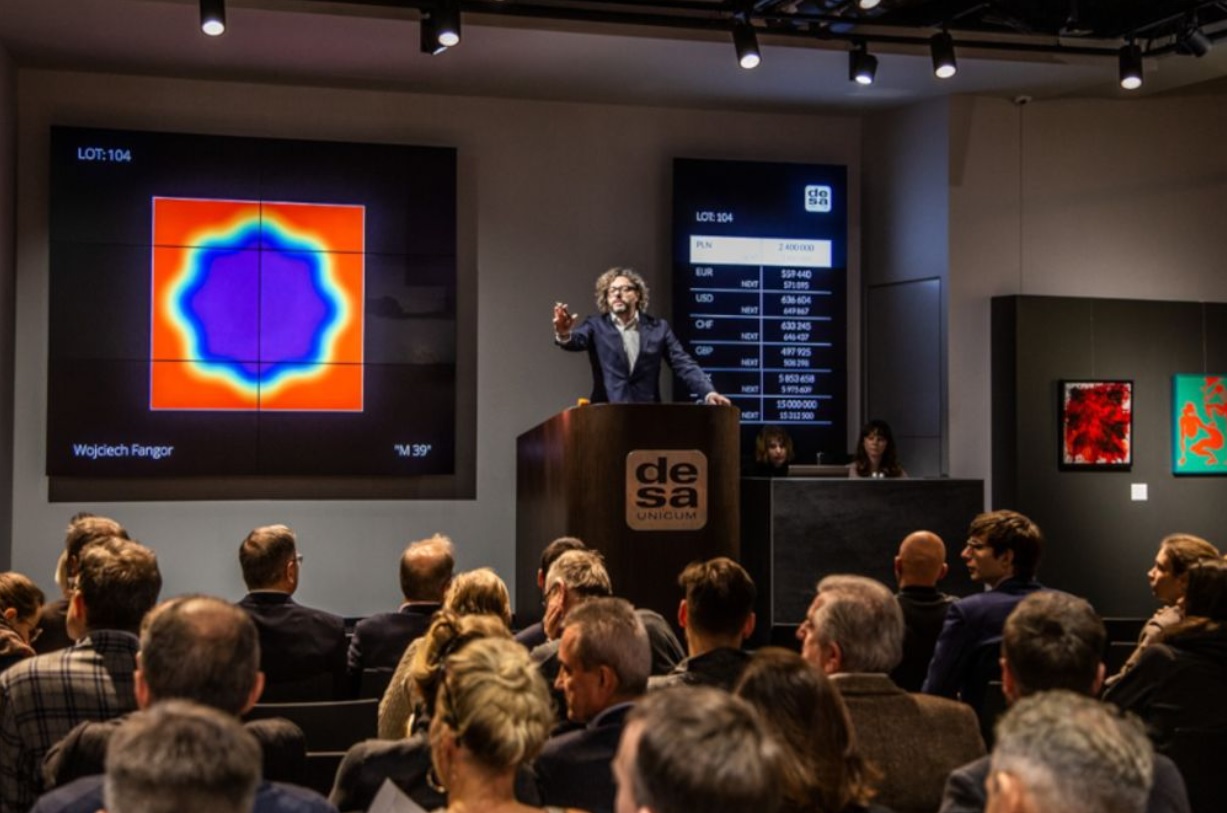 “He pioneered a very original approach to art,” says Kowalska. “His edgeless pieces and abstract shapes served his goal of appropriating the space around the painting and you can see that in the works that we have for auction: they inhabit the whole space around them. They’re very effective paintings.”

Much of this relates directly to his visionary methodology. 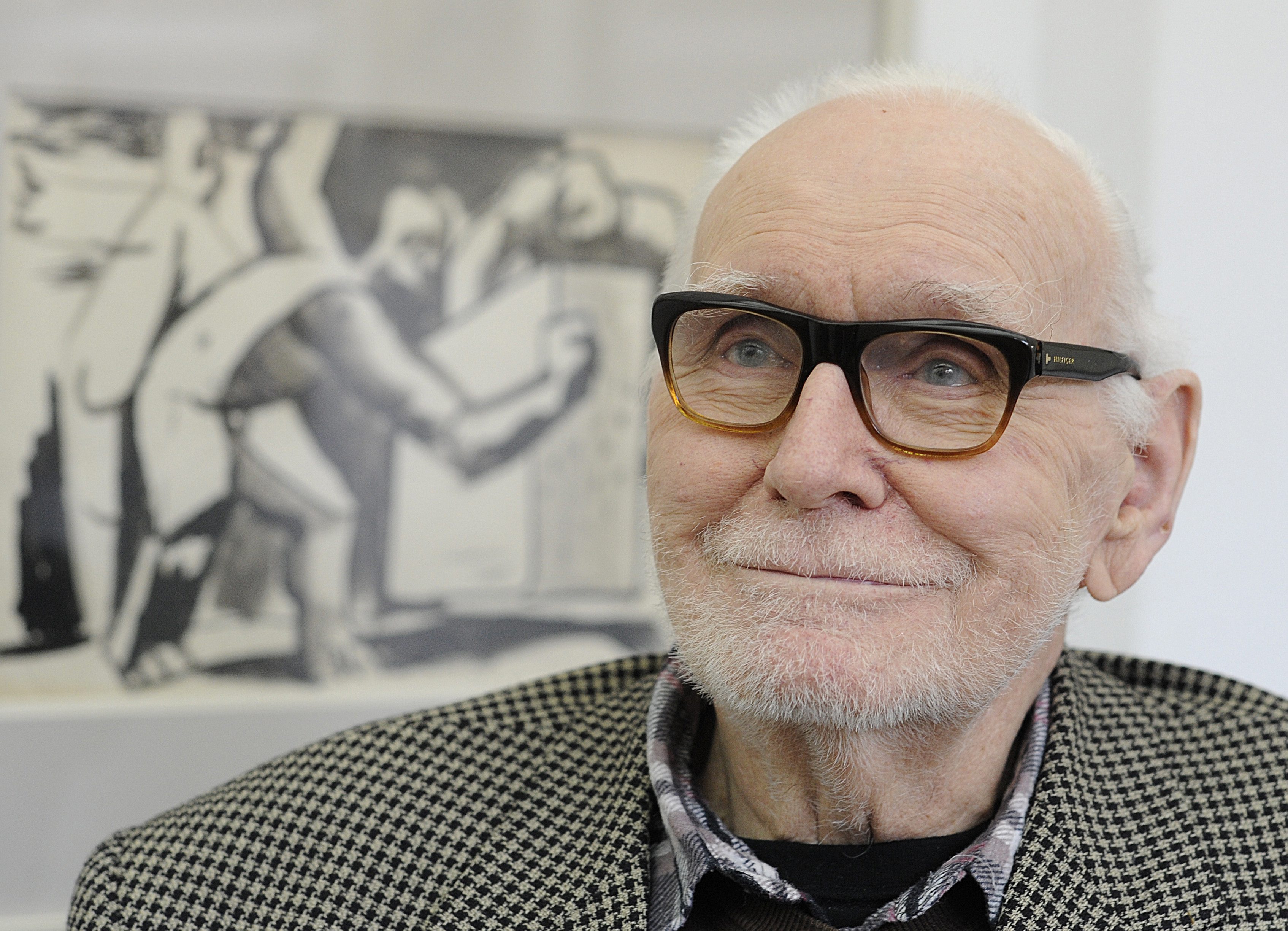 Wojciech Fangor is considered one of the great masters of Polish post-war art.Andrzej Rybczyński/PAP

“He was incredibly original,” says Kowalska. “The intensity of his colours were exquisite, and that’s linked to the techniques he used. At a time when most artists involved in op-art or abstract expressionism were using acrylic paints, he was using oil paints.

“Everything was created by hand, with layers upon layers painted onto canvas with a soft brush. And because of these oil paints, he was able to achieve a great depth that was very luminous in colour and almost hypnotic in its style. These are meticulous works that are so geometric that they appear almost as if they were sprayed on. That alone is a tribute to him both as an artist and a technician.” 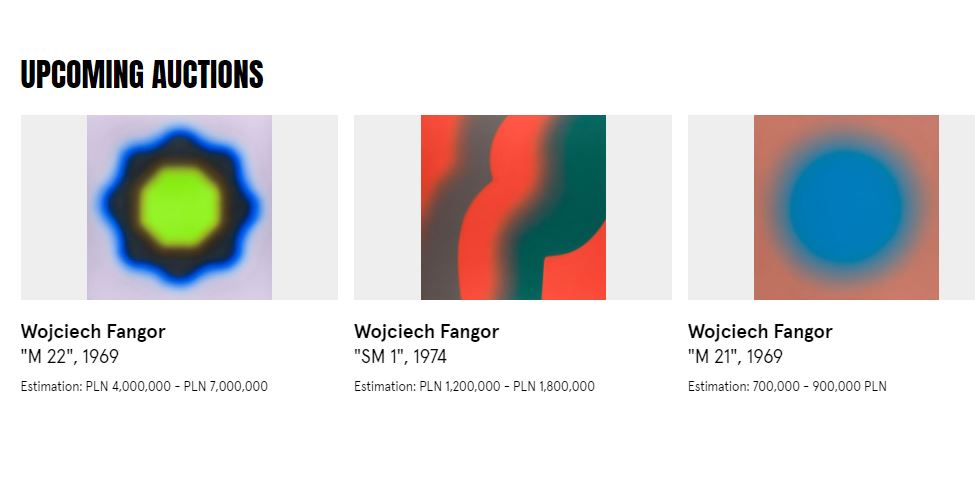 Created during the height of his fame in the late 60s and early 70s, the three paintings offer a stunning glimpse into his genius.Desa Unicum

Invited to headline a solo exhibition at the Guggenheim in 1972, to this day he remains the first and only Pole to be bestowed with that honour – and forming part of this exhibition was M 22.

An emblematic work, it has continued to encapsulate Fangor’s core philosophies and over-arching motifs. 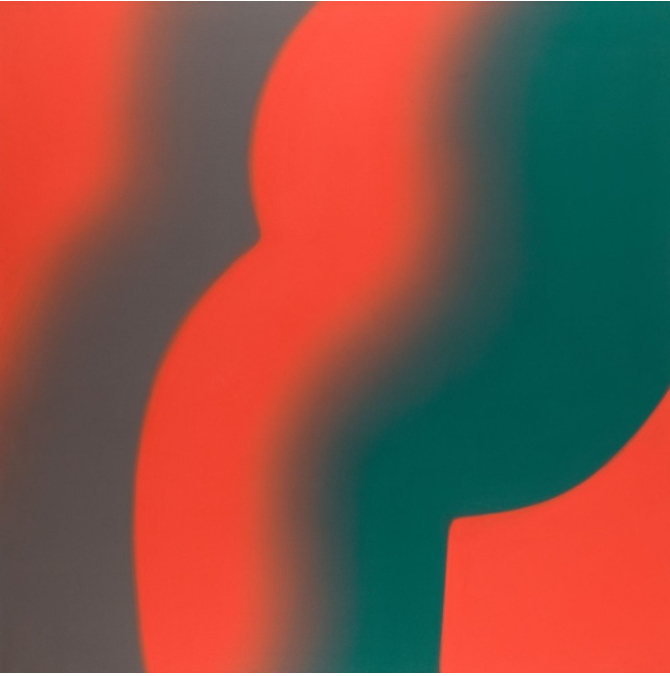 Fangor’s life-long passion with astronomy is shown through parallels between celestial bodies and his art. Pictured: SM1 which has a sale guide price of PLN 1.2 to 1.8 million.Desa Unicum

“Astronomy was his lifelong passion, and you can see parallels between celestial bodies and his art,” says Kowalska. “It’s also interesting because whilst it shows his roots in art history and his appreciation of tradition, it simultaneously displays his very unique and modern way of approaching art.

“He was interested in the way the eye worked and in how viewers would receive a painting; working with Polish architects, he enjoyed discovering how spatial arrangements could interact with a painting, and in turn, how individuals within that space would respond to the painting in question. It was a very scientific way of thought.”

Having moved back to Warsaw in 1999, Fangor passed away in 2015 at the age of 92. His legacy, however, continues to reverberate as evidenced by the excitement surrounding tomorrow’s landmark auction.