The sensational discovery nearly 60 years ago in a sleepy Masovian village of a painting by one of the world’s greatest late medieval master painters is the subject of a documentary that premieres tonight.

To this day, how El Greco’s oil painting the Ecstasy of St. Francis ended up in Poland remains a mystery.

Polski El Greco (The Polish El Greco) directed by Katarzyna J. Kowalska picks up the story in 1964 when it was discovered by two young art researchers in the rectory of the church in Kosów Lacki. 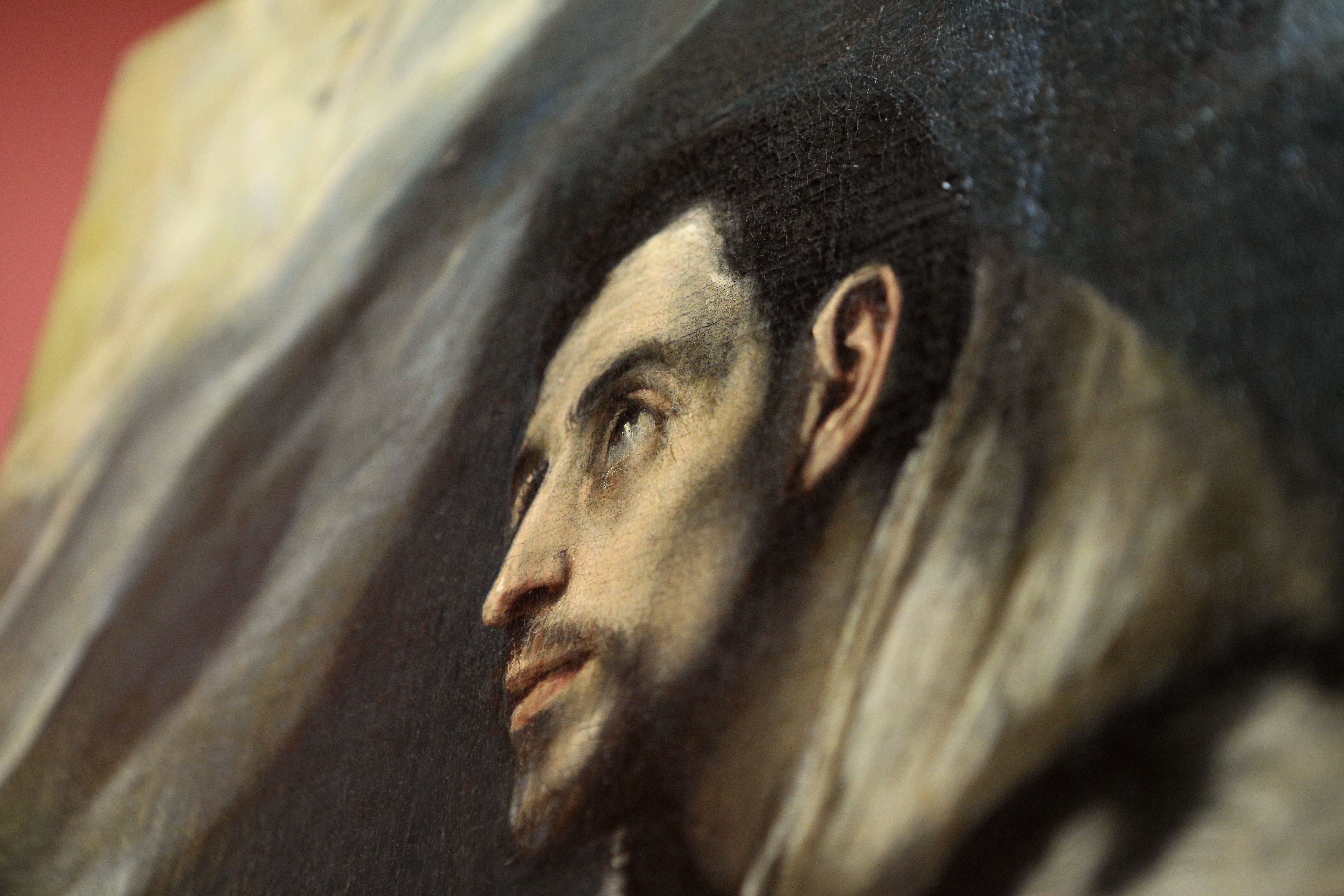 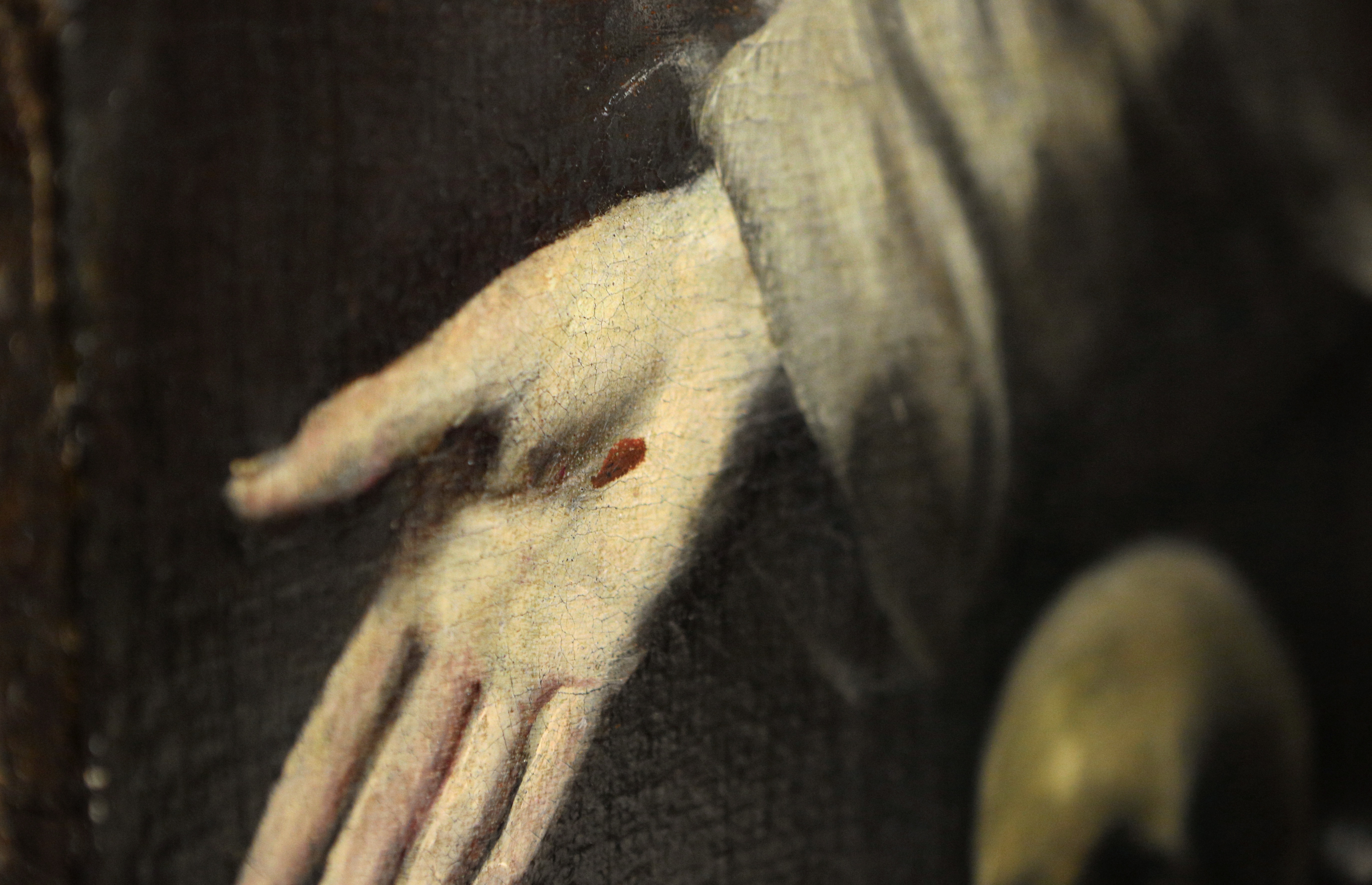 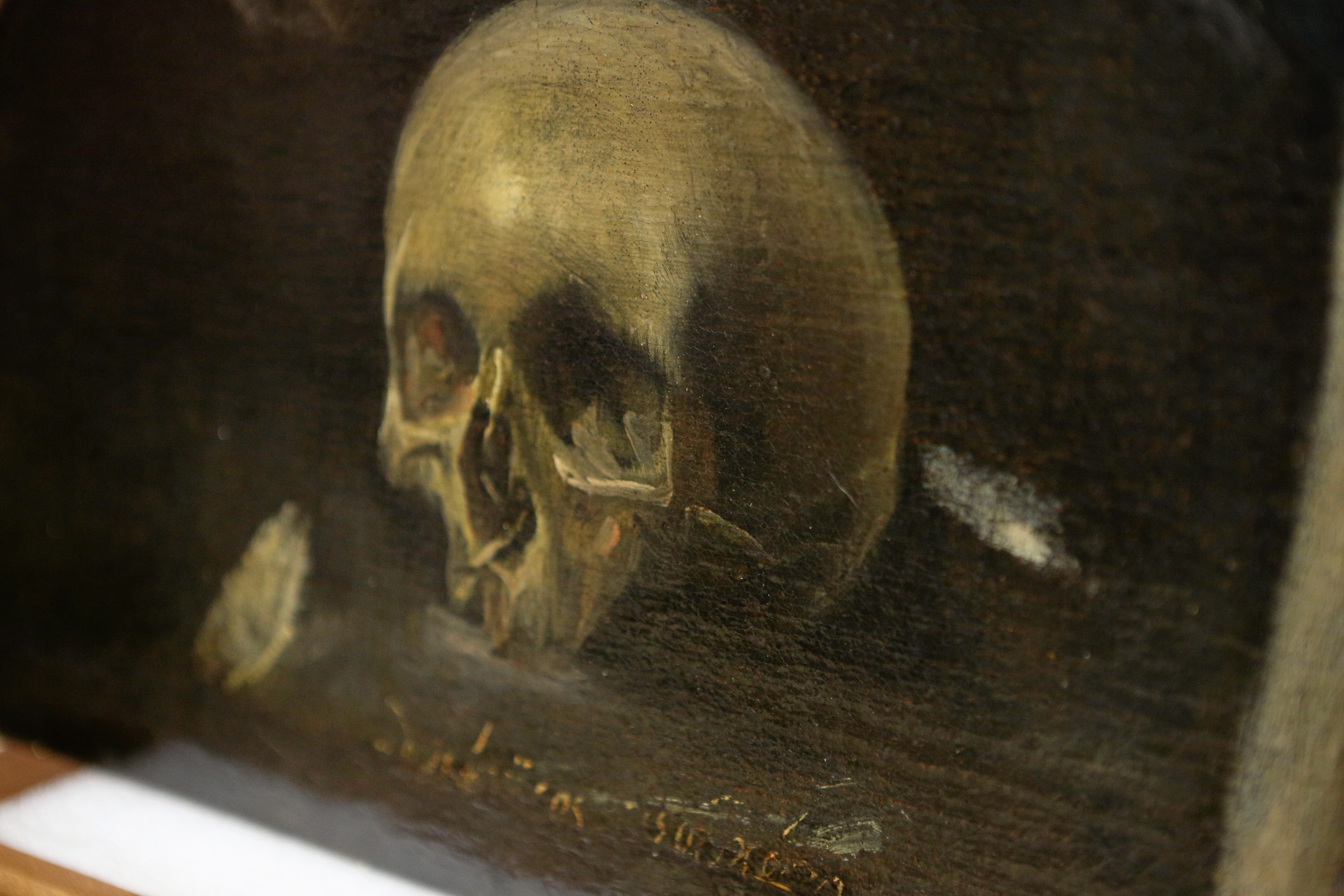 It was initially thought that the painting was fake until conservators Removed layers of paint to revel the Greek letter delta, the first letter of the name Doménikos Theotokópoulos, El Greco’s real name.Stanisław Rozpędzik/PAP

Kowalska, a journalist and reporter, spent four years documenting the fate of the painting. Her film blends commentary from witnesses to the events with cinema-style re-enactments.

Poland is rich in paintings that come packaged with fascinating stories of loss and rediscovery, most often tied to the second world war. Yet, the Ecstasy of St Francis remains relatively unknown, sidelined in the small diocese museum in Siedlce.

Kowalska's film, made in cooperation between TVP and the Pilecki Institute, aims to counter this. 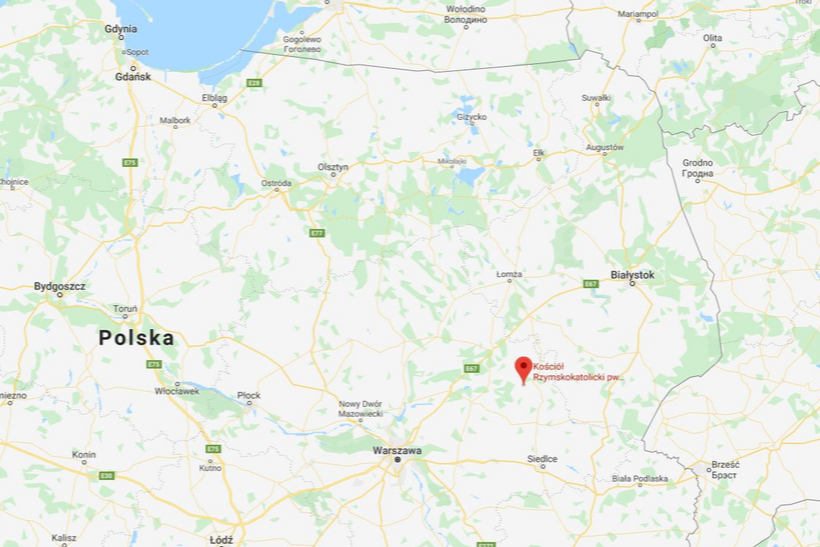 The painting was found in the church in the small town of Kosów Lacki, halfway between Warsaw and Białystok. Google maps

“The story of the discovery and rescue of a painting by El Greco is the story of the struggle of two female inventors, unheard, unappreciated, who for many years no one wanted to take seriously. It is a story about the extraordinary passion of two young women who did not doubt for a moment what their intuition told them,” said Kowalska on the Pilecki Institute website.

“It is also a journey across post-war Poland, full of destroyed and plundered churches, poor and distrustful,” she added.

In 1964, the young art researchers Izabella Galicka and Hanna Sygietyńska were touring Mazowsze on a mission for the Polish Institute of Art to record the region’s treasures.

Kosów Lacki at first seemed like many other sleepy places they had visited. 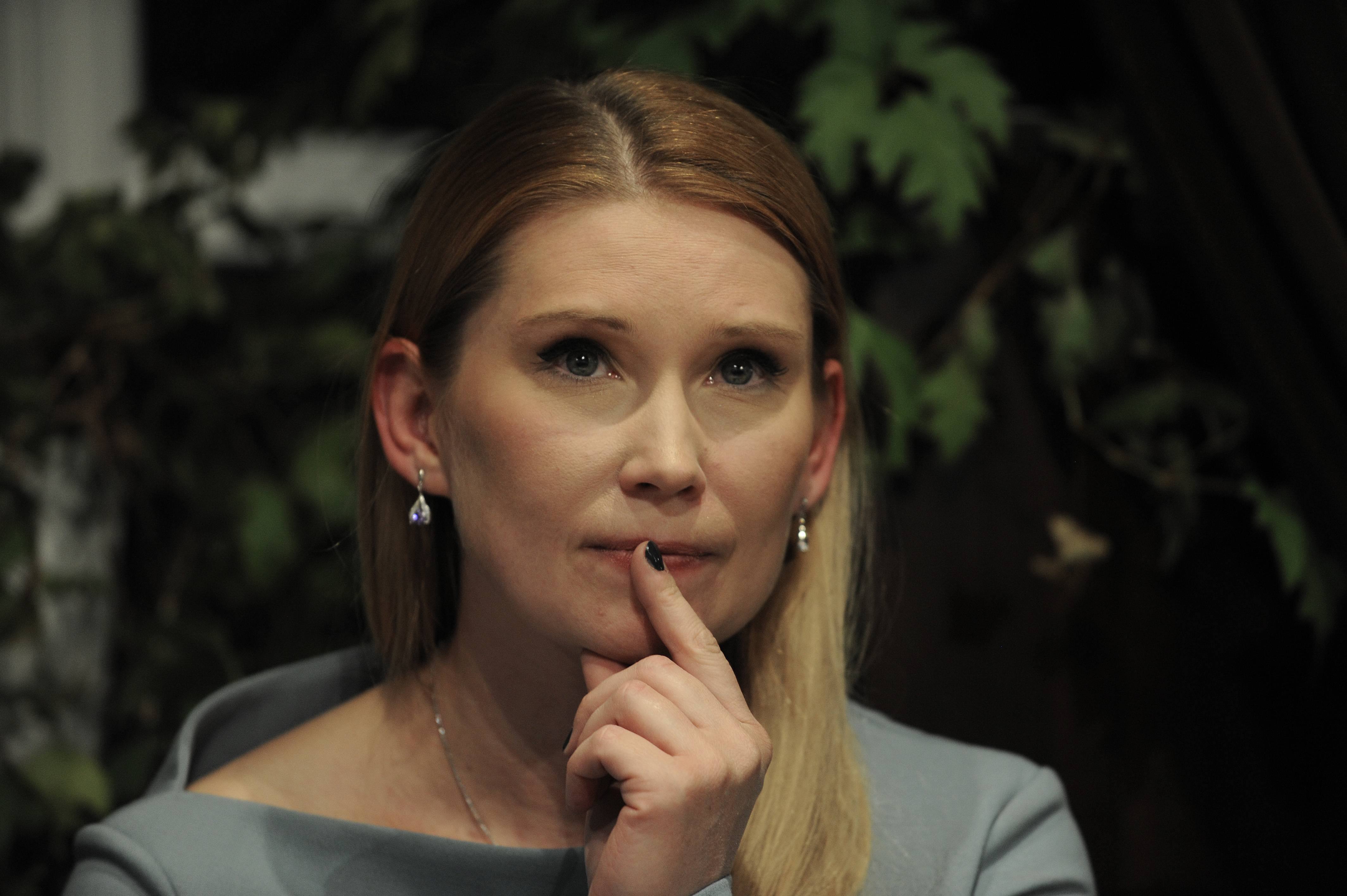 Katarzyna Kowalska, a journalist and reporter, spent four years documenting the fate of the painting.Andrzej Rybczyński/PAP

They noted the historic church and its interior: crucifixes, chalices, paintings. However, when it seemed that they had completed their task, they noticed an image of St Francis hanging on a wall in the rectory.

"We stood in front of it, and something began to happen between us and that painting," Izabella Galicka recalled years later.

After returning to Warsaw they started to study the painting and concluded that the painting was created in El Greco's workshop.

After long research, they wrote an academic article declaring that it was the work of the master himself. 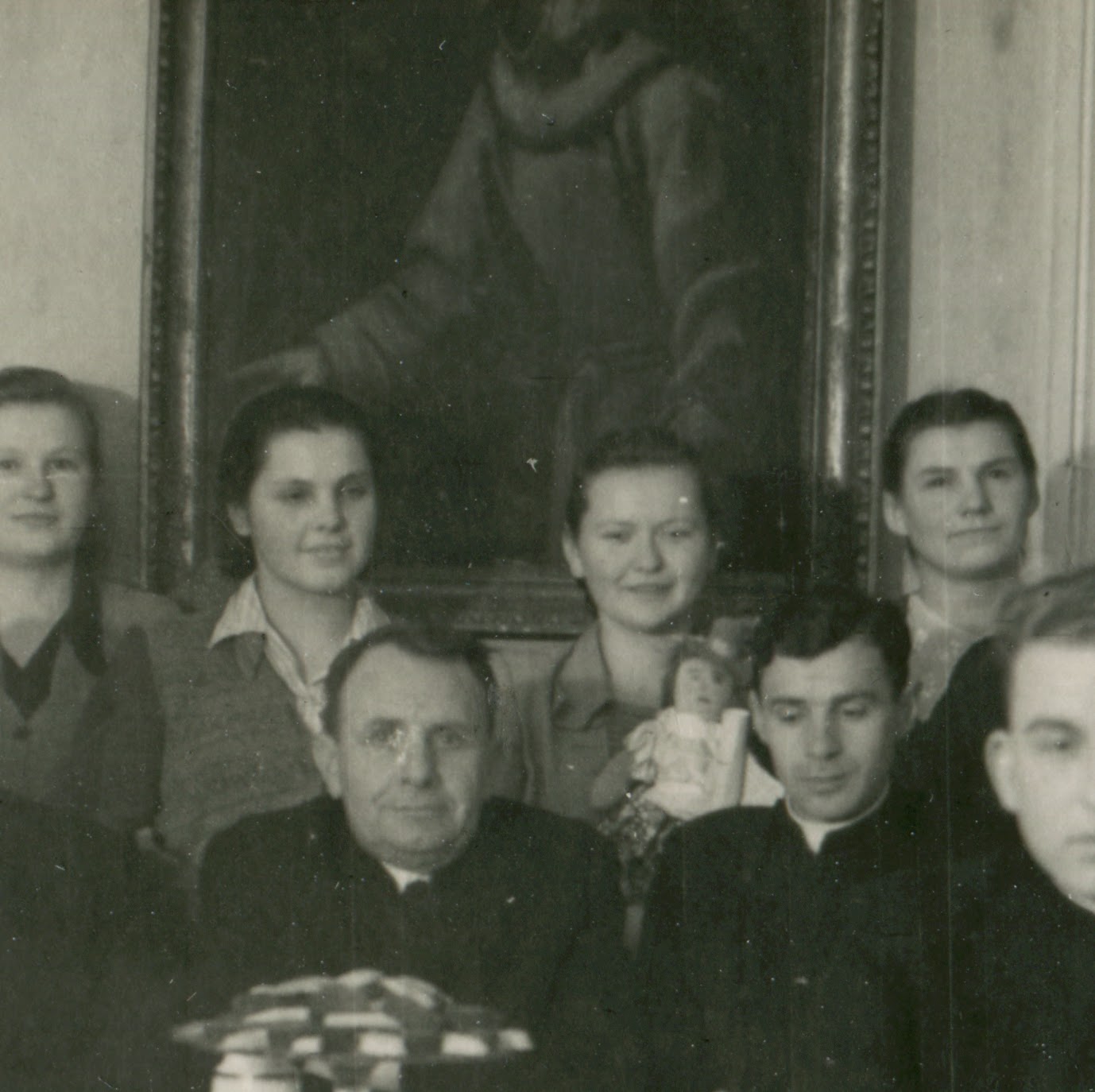 The painting in the background in the church rectory in Kosów Lacki.byciopis.blogspot.com

The researchers expected an avalanche of attention but nobody was interested.

They had to wait until 1967 when Polish Press Agency journalist Roman Janisławski stumbled across the article when he was browsing in a Łódź library.

“At first, he cannot believe it. (…) He reads the fascinating article with blazing eyes twice, three times,” Kowalska wrote in a book on the same subject. 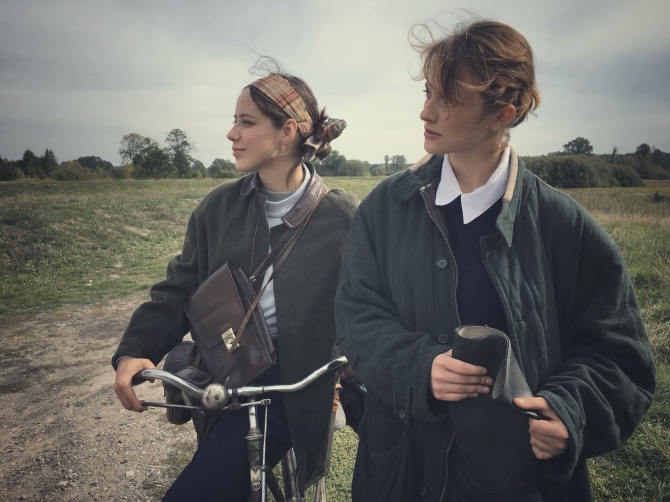 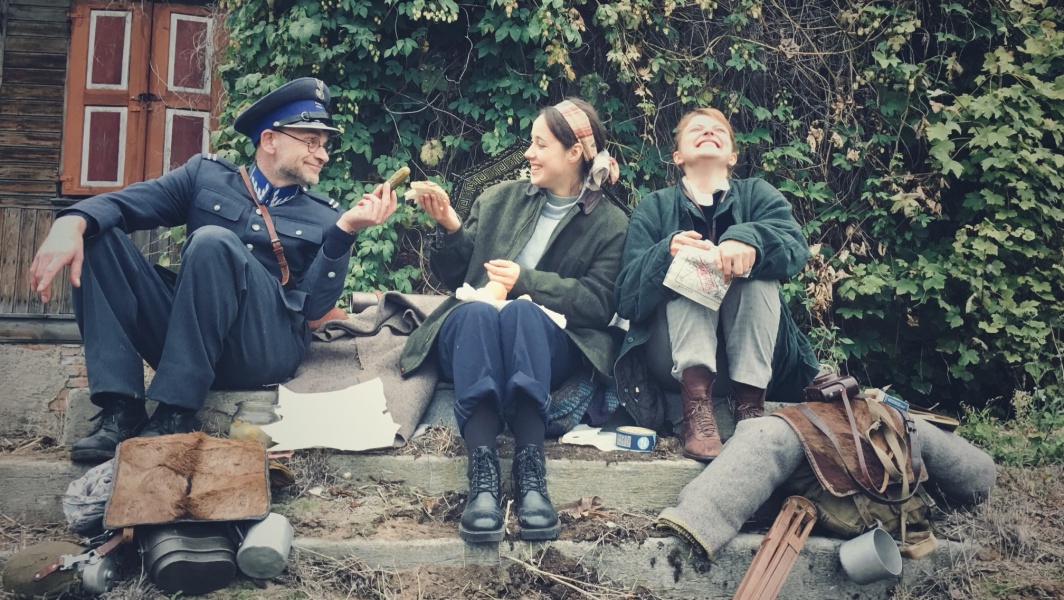 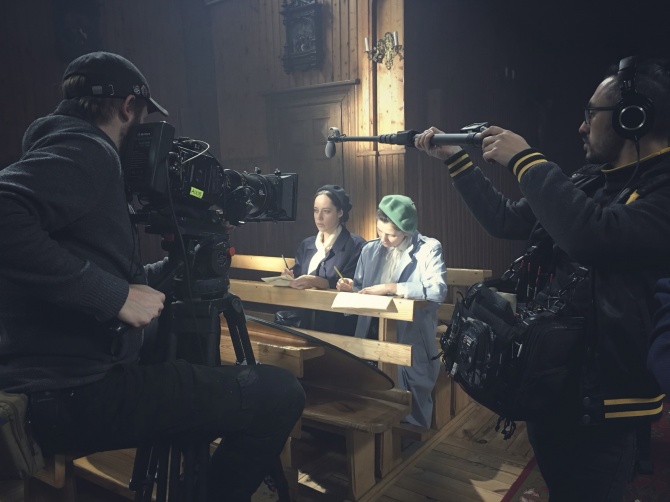 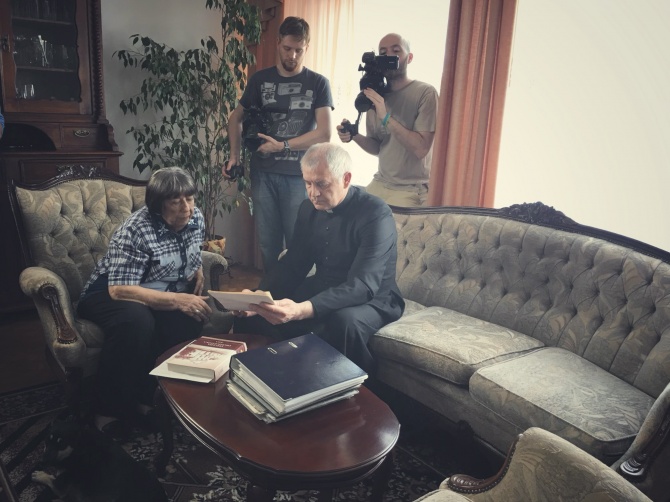 The documentary blends commentary from witnesses to the events with cinema-style re-enactments.Press materials

PAP released the story that night and it was published by three newspapers on April 1. Others ignored it thinking it was an April Fool.

Eventually, when people realised that it was a genuine story, the press descended on Kosów Lacki.

Following close on their heels was a group of distinguished art experts to pass judgement on the claim.

They intoned that it was in fact not painted by El Greco. The hand was badly painted, the head was wrong, the skull did not suit El Greco. 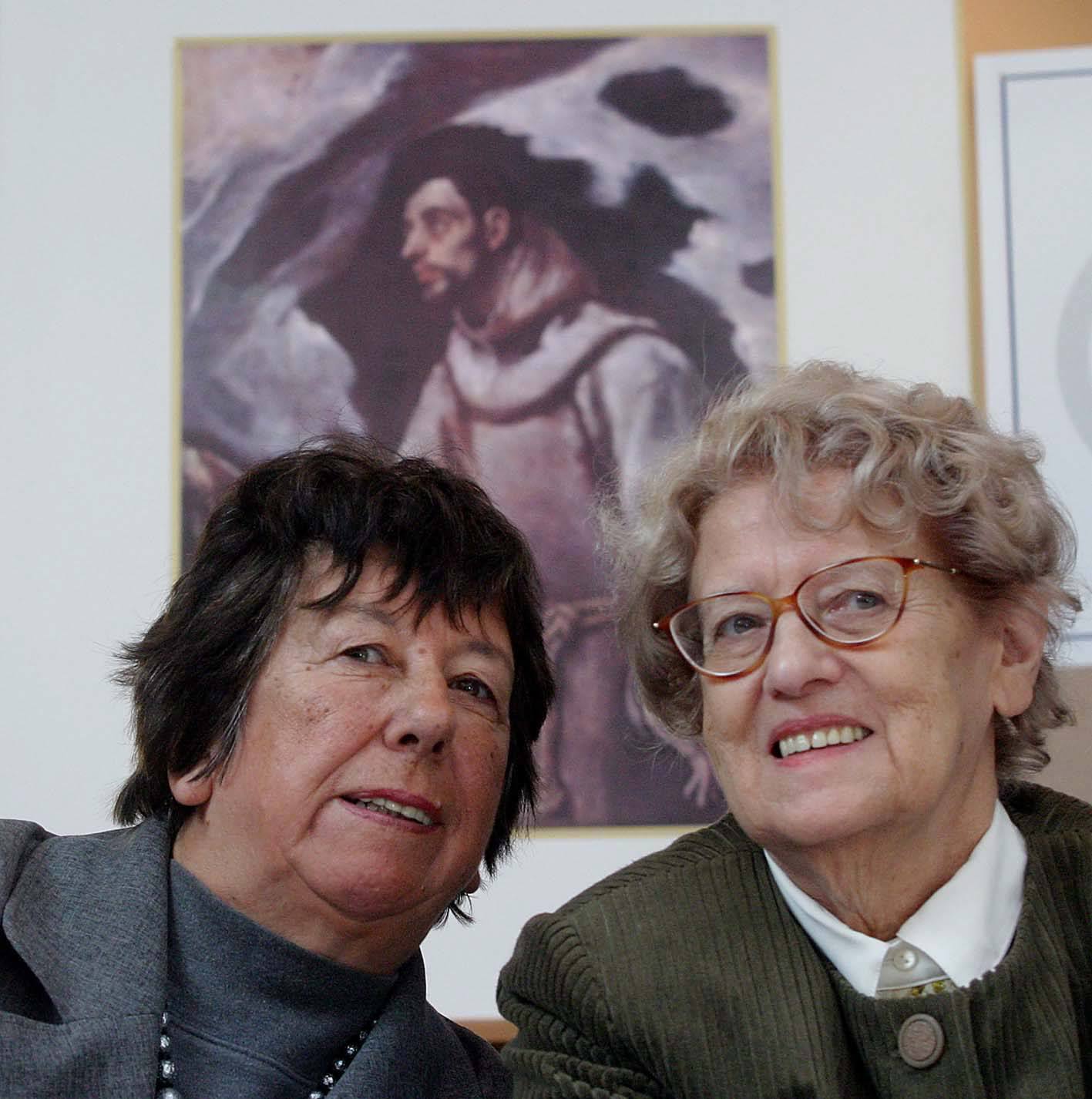 In 1964, art researchers Izabella Galicka and Hanna Sygietyńska were touring Mazowsze on a mission for the Polish Institute of Art to record the region’s treasures when they came across the painting.Paweł Kula/PAP

The two researchers were ridiculed as being amateur fantasists.

Kowalska said in PAP Life: “The art historian community of the 1960s thought this painting was no good. Today we know it was repainted. El Greco's crazy clouds were painted over, the brushstrokes were falsified by the thick varnish, there was another layer of paint on some places, a disfiguring hole in the upper left corner. It was difficult to see the beauty in it.”

The breakthrough came 10 years later, when the painting went to Warsaw for conservation, which turned the painting from a curiosity into a sensation. 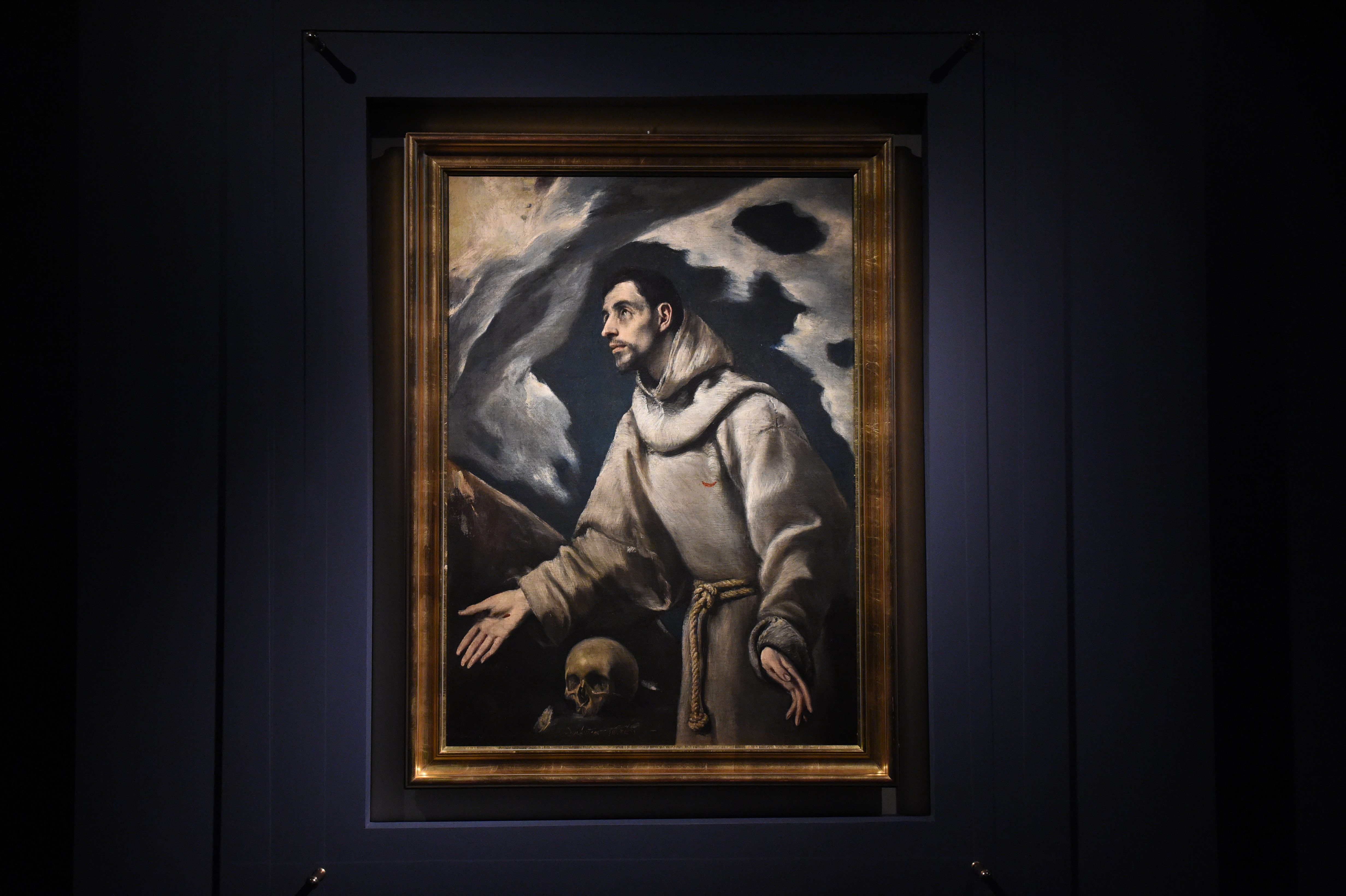 A parish priest had found the painting in the church’s belfry, stashed away with piles of junk waiting to be burned. Not wishing to burn St Francis of Assisi, he hung it on his wall, where it had stayed ever since. Radek Pietruszka/PAP

The greatest expert in the field of conservation and the examination of works of art, Professor Bohdan Marconi inspected it along with art restorers Maria Orthwein and Zofia Blizinska.

After removing two layers they saw the signature A. van Dueck, a misspelling of Anton van Dyck, probably a ruse to boost the painting’s value at some time in the distant past.

Professor Marconi advised his colleagues to check deeper, a very risky decision. After another layer was swabbed away, the trio saw to their amazement the Greek letter delta, the first letter of the name Doménikos Theotokópoulos, El Greco’s real name.

News of the amazing discovery spread quickly and the country was soon engulfed in collective euphoria. 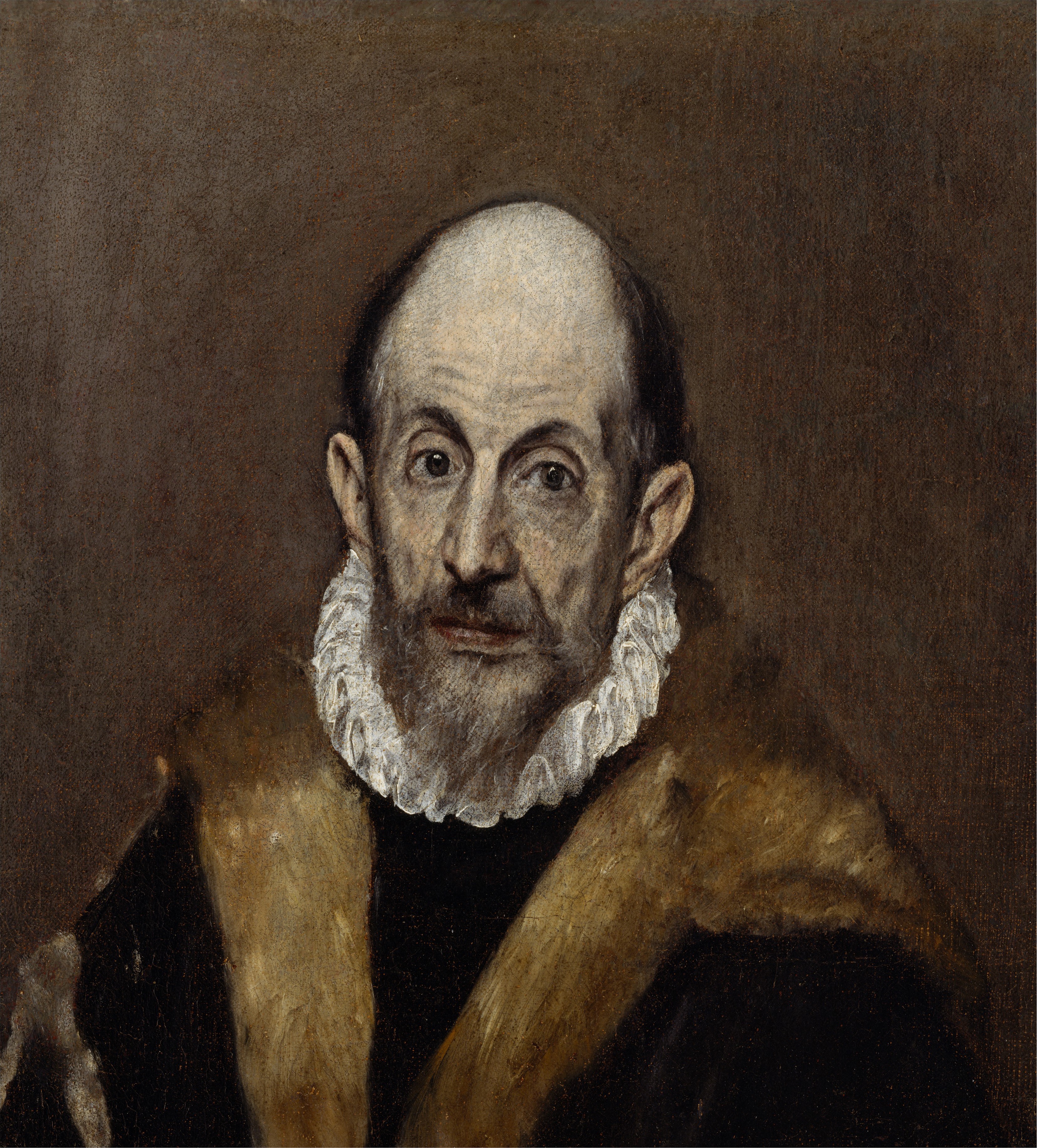 El Greco was a Greek painter, sculptor and architect of the Spanish Renaissance.
Public domain

Journalists ranked the painting among the six most valuable works of art in Poland. Estimates of its value reached 1.5 million dollars, a head-spinning amount in Communist Poland.

The canvas returned to Siedlce but its exact location was carefully guarded by the Church because of the political situation.

Church bosses feared that the canvas would be snatched by the Communist authorities. This was not unfounded, as the state wanted to place the painting in a public institution. 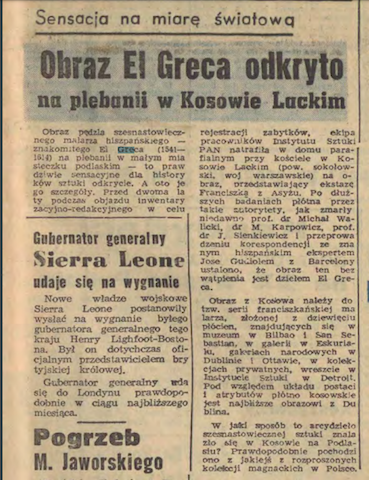 The story was first published by Roman Janisławski, a journalist from the Polish Press Agency, and on 1 April, 1967, it appeared in a few newspapers including Dziennik Łódzki (pictured). Because of the date though, many believed it was an April Fool’s joke. reprint

In the 1980s, there were even two unsuccessful burglaries into the Bishop's Palace in Siedlce, both thwarted by the bishop who fired shots from a starting pistol.

This situation lasted for decades. Even after the collapse of communism in Poland, the Church was unwilling to bring the painting out of hiding.

Hopes were raised when a few months after John Paul II's pilgrimage to Poland, the Diocese Museum in Sieldce opened opened in March 2000.

Fifteen rooms are open to visitors, but none of them contained the El Greco painting. 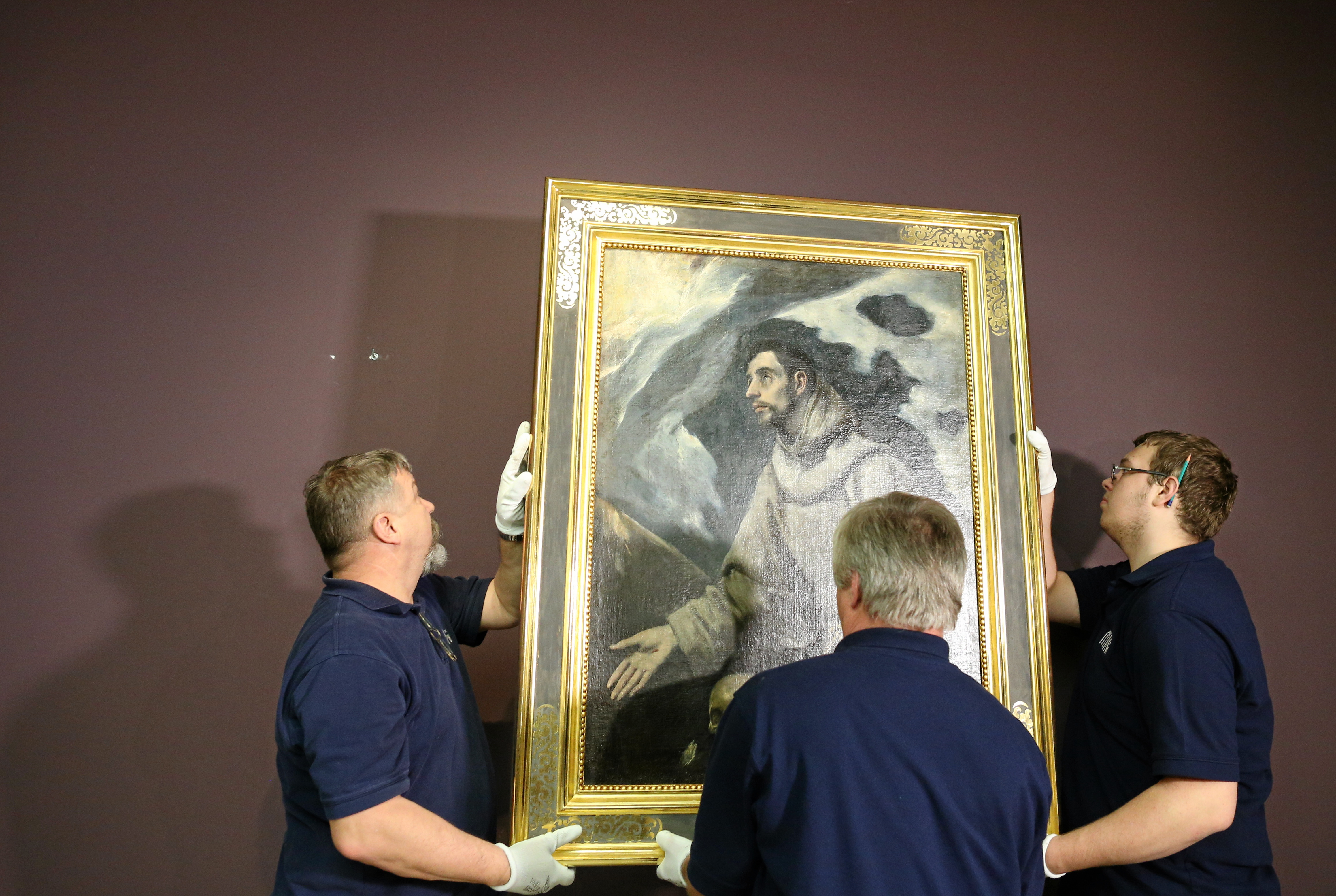 The painting was eventually made public in 2004.Stanisław Rozpędzik/PAP

After extensive work to boost the modest museum’s security, the painting finally arrived in April 2004.

Izabella Galicka and Hanna Sygietyńska were at the opening. After 40 years, their dream has come true: El Greco's The Ecstasy of St Francis was open to the public.

How the painting ended up in Poland is a mystery. There is a hypothesis that it may have belonged to a Polish aristocrat who could have brought it back from Spain in the Napoleonic period.

Count Wincenty Krasiński from the Sterdyń palace near Kosów Lacki has been tipped as a potential source. He fought under Napoleon Bonaparte at the Battle of Somosierra in 1808 and travelled with his army all the way to Russia. 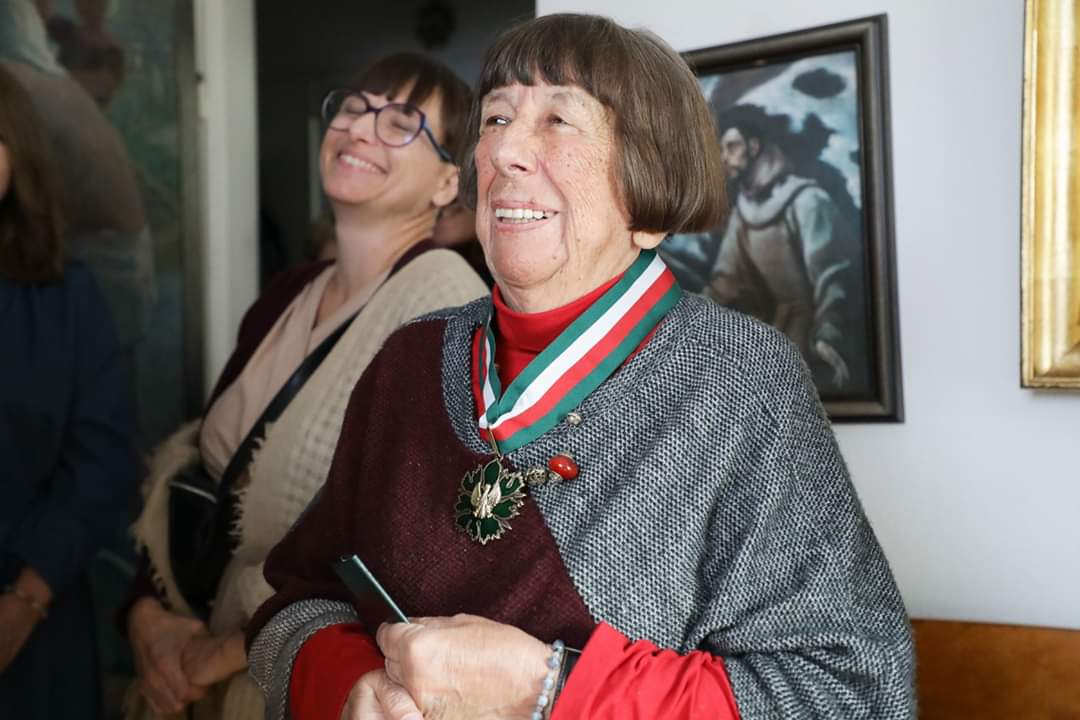 The documentary gives a lot of screen time to Izabella Galicka, who was interviewed extensively during the film’s making.

She died 1 November 2019 at the age of 89. Three weeks before her death, she was awarded the Gloria Artis Medal for Merit to Culture.

Polski El Greco will be screened on TVP2 tonight at 18.20.

The film can also be watched on TVP’s video on demand service at https://vod.tvp.pl/website/polski-el-greco,52794481.